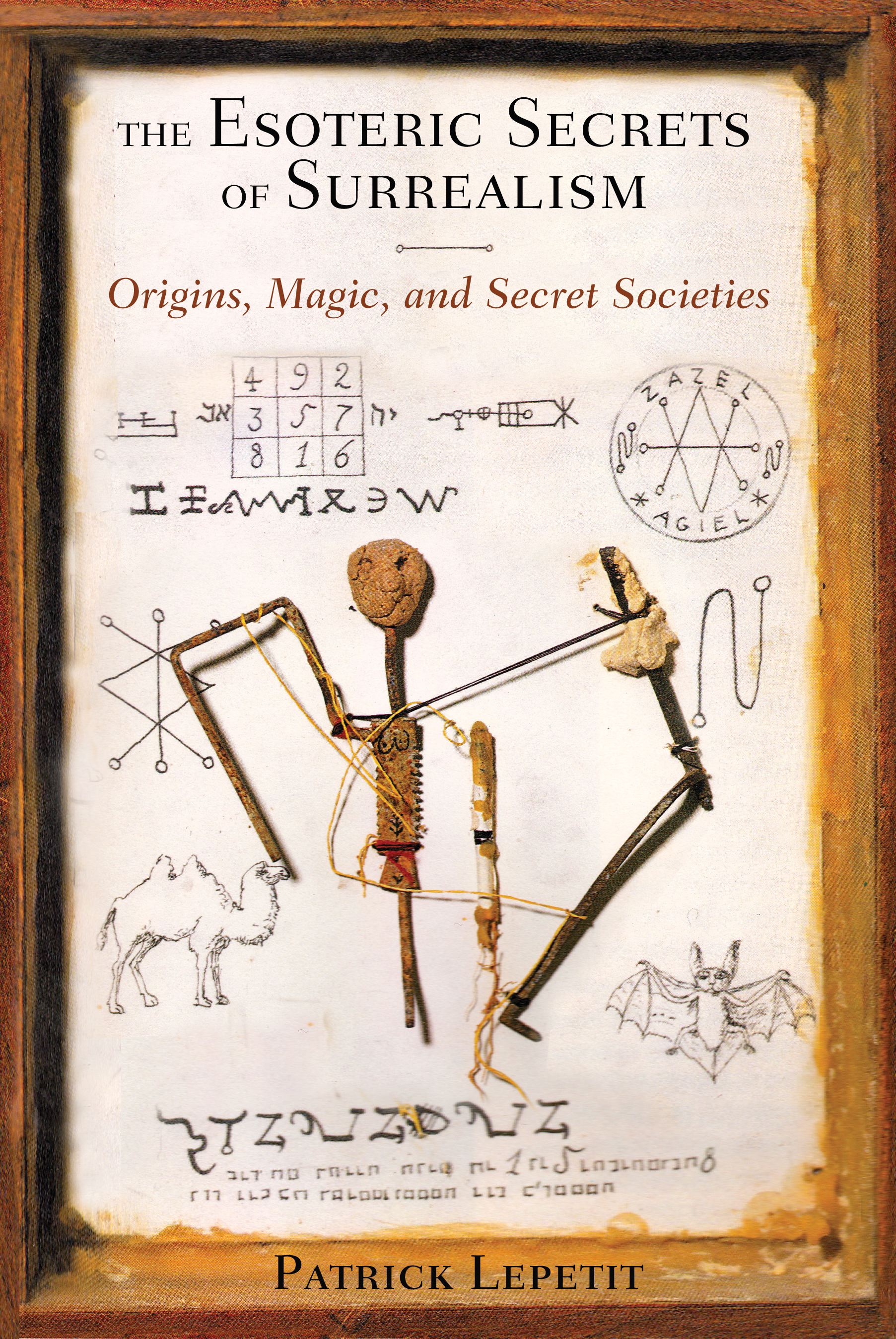 The Esoteric Secrets of Surrealism

• Explains how surrealist paintings and poems employed mythology, gnostic principles, tarot, voodoo, alchemy, and other hermetic sciences to seek out unexplored regions of the mind and recover lost “psychic” and magical powers

• Provides many examples of esoteric influence in surrealism, such as how Picasso’s Demoiselles d’Avignon was originally titled The Bath of the Philosophers

Not merely an artistic or literary movement as many believe, the surrealists rejected the labels of artist and author bestowed upon them by outsiders, accepting instead the titles of magician, alchemist, or--in the case of Leonora Carrington and Remedios Varo--witch. Their paintings, poems, and other works were created to seek out unexplored regions of the mind and recover lost “psychic” and magical powers. They used creative expression as the vehicle to attain what André Breton called the “supreme point,” the point at which all opposites cease to be perceived as contradictions. This supreme point is found at the heart of all esoteric doctrines, including the Great Work of alchemy, and enables communication with higher states of being.

Drawing on an extensive range of writings by the surrealists and those in their circle of influence, Patrick Lepetit shows how the surrealists employed mythology, gnostic principles, tarot, voodoo, and alchemy not simply as reference points but as significant elements of their ongoing investigations into the fundamental nature of consciousness. He provides many specific examples of esoteric influence among the surrealists, such as how Picasso’s famous Demoiselles d’Avignon was originally titled The Bath of the Philosophers, how painter Victor Brauner drew from his father’s spiritualist vocation as well as the Kabbalah and tarot, and how doctor and surrealist author Pierre Mabille was a Freemason focused on finding initiatory paths where “it is possible to feel a new system connecting man with the universe.”

Lepetit casts new light on the connection between key figures of the movement and the circle of adepts gathered around Fulcanelli. He also explores the relationship between surrealists and Freemasonry, Martinists, and the Elect Cohen as well as the Grail mythos and the Arthurian brotherhood.

It has been too easily forgotten today that the era preceding the birth of surrealism throughout Europe was placed under the sign of an extraordinary violence: class violence, state violence, the intellectual and political terrorism of the war mongers that could not help but rub off on society and corrupt it. The totalitarian regimes that would soon establish themselves were already embryonic. But this is where their seeds lie and not, we should remember, in a movement by survivors desperately seeking to re-enchant the world, such as the one surrealism created. According to Georges Bataille, who noted in The Tears of Eros: “The wars of our century mechanized war; war has become senile. The world eventually surrendered to reason.”

Paul Virilio, forcefully points this out in an interview with Enrico Baj.

We cannot understand what happened after cubism to the time of abstract art and the Viennese action painters, if we do not make the connection with the horrors of war, wars made even more horrible by technology, gas, and new kinds of bombs. This gave rise to a permanent torture of the body and the latent terrorism of the avantgardes, with the Dadaists, Surrealists, and Situationists . . .

We should add here the accompanying “intellectual” catastrophe, the twilight of thought noted by Jean-Marie Domenach in his Barrés par lui-même [Barrès in his own words], which re-creates “that formidable torrent of nationalist and ‘anti-Kraut’ nationalism in which the French intelligentsia faltered for a moment, losing its respect for truth and bordering on racist justification.” To get a more concrete idea of the context, it is good to keep in mind these words by Max Ernst, quoted in the catalog for his Beaubourg retrospective in 1991.

We other young men returned from the war in a daze, and our indignation needed an outlet. It naturally found one in violent attacks against the basic fundamentals of the civilization that had brought on the war, attacks against language, syntax, logic, literature, painting, and so forth.

Ernest de Gengenbach observed in Judas or the Surrealist Vampire

All these young men who escaped from the nightmare and marked by the war they had waged without joy, returned full of disgust and animated by a radical nihilism against all manifestations of civilization, and against the law and morality of a Society that had so casually sent them off to death. They wanted to free and deliver man forever from the systems straitjacketed by reason, logic, and religious mysticism that had led to this vile butchery. They spit on a sordid reality and set off in search of an unreal, unknown world that was more true than the other and inhabited by strange creatures in never-before-seen landscapes. Poetry restored to its original state would become a magic that would transform humanity and change life and the world. The poet would again become a seer, medium, and prophet and rediscover the enchanted spring and the treasures of a paradise that twenty centuries of Christian oppression had banished. The surrealists sought to have done with the ideas of family, country, religion, and the current esthetics and moralities.They ripped away their pseudo-civilized masks in order to achieve metempsychosis.

As if picking up the relay, Michel Carrouges adds: “The question of death posed by the war never stopped being raised in all its violence.”

Aware that the radical moral evolution to which it aspired could only occur within the much larger context of profound social transformation, the movement sought support from revolutionary thought—the transition from La Révolution surréaliste to Le Surréalisme au Service de la Révolution. Following the betrayal of Bolshevik ideals by Stalin and those like him, following the murder of Trotsky and the rupture of the Fourth International, and following the new carnage of the second World War, realizing, as Jean-Louis Bédouin noted, this would only lead to failure “so long as revolutionaries confine themselves to certain specific aspects of social life without attacking the spiritual structure of society directly,” it was somewhat paradoxical among the anarchists that the movement sought political asylum.

But following the crushing of the Spanish Revolution, anarchism was increasingly viewed as “the political formulation of despair” and the crucible of inaccessible utopias. It also possessed the merit of not being overly criminal by accepting (as Philippe Audoin made perfectly clear), that “no mistake, utopia is the blessed isle, nature beneath the tumultuous wind of charms, in a word, the possible.” André Breton, in his desire to bring to fruition “the mission, assigned to man, to violently break with the ways of thinking and feeling that had led him to no longer tolerate his existence,” as a “revolutionary [then] forged a highly uncommon tradition: the family of the great heresiarchs.” We can also ask if the desire to occult surrealism in the Second Manifesto was not inversely proportional to the rising perils that would lead to another war and if the consolidation of the esoteric path after 1945 did not correspond in some way to the creation of a climate of permanent insecurity connected with the entrance into the Atomic Age.

Breton wrote in his poem “Postcard” dedicated to Benjamin Péret and published in the Belgian magazine L’Invention collective in April 1940:

Whatever the case may be, incapable of hunting for this other world in the spiritual space that overlays this expression in a religious context, or build his aerie in any transcendental ecological niche, he was condemned to this squaring: inventing the world beyond right here, painting its innate transcendence with an utterly pure immanence. This is undoubtedly the secret of surrealism.

Patrick Lepetit has written several books in French on esoteric traditions and surrealism. He is a member of the Grand Orient de France and of the Mélusine Network of scholars interested in surrealism. He lives in Mons en Baroeul, France.

“This book is a necessary resource for those readers interested, or rather compelled, by the implicit and explicit relationships between surrealism and the initiatory forms that comprise the great traditions of the esoteric and occult arts. The author, whose enthusiasm for his subject is equaled by his erudition, provides for the first time in English translation numerous excerpts from noted surrealists commenting directly on the subject at hand, whether it be divination, astrology, dark romanticism, the Celtic world, or alchemy, magic, Voudoun, Gnosticism and mythopoesis. His exegesis and conclusions are ripe, and should provoke the reader not only in terms of encountering the texts and works discussed throughout the various ages and contexts they were created in but also in recollecting, or revisiting, quite personal moments that have acted as levers or axial junctures from which much else evolved. Patrick Lepetit’s scholarship in this regard is revivifying and precise. A much needed looking glass into a still evolving gyre in which science, as a capacity for astute observation, and poetry, where our internal and external theaters merge, have ever the potential of reaching new syntheses.”

“Lepetit’s book remains an excellent one. For readers with an interest in occultism and spirituality it offers a journey of initiation into the arcana of modern art and literature; for scholars and students of the surrealist movement, it is essential reading. According to the English-born surrealist Leonora Carrington, modern men should abandon themselves to the great ocean of the unknown and rediscover a sense of magic and enchantment amid the dull and monotonous shades of rationalized society. Reading Lepetit's study is a first plunge into precisely this sea of spirituality.”

“French scholar Lepetit’s first English-language book, translated by Jon E. Graham, draws extensively on the work of others to suggest links between esoteric traditions and the surrealist movement. Lepetit calls on a parade of commentators to support his argument that surrealist artists such as André Breton and his colleagues were more than avant-garde painters and poets. Instead, posits Lepetit, they had strong ties to spiritualists, Freemasons, voodoo practitioners, and secret societies of all stripes; he believes that their message was not only psychological, but essentially spiritual. Lepetit is an enthusiastic researcher, and this volume is thick with quotations, references, and footnotes that explore every aspect of surrealism. Precisely how all of these dimensions are related to each other is not always clear, because quotations so rapidly follow one another that they leave little room for Lepetit to comment or readers to reflect. While textual sources abound, Lepetit includes only 21 illustrations to provide examples of the wealth of surrealist art he refers to in the text. Previous knowledge of surrealist art and the history of the occult are recommended before delving into Lepetit’s specialized body of knowledge. A comprehensive bibliography provides ample opportunity for additional exploration.”

The Esoteric Secrets of Surrealism