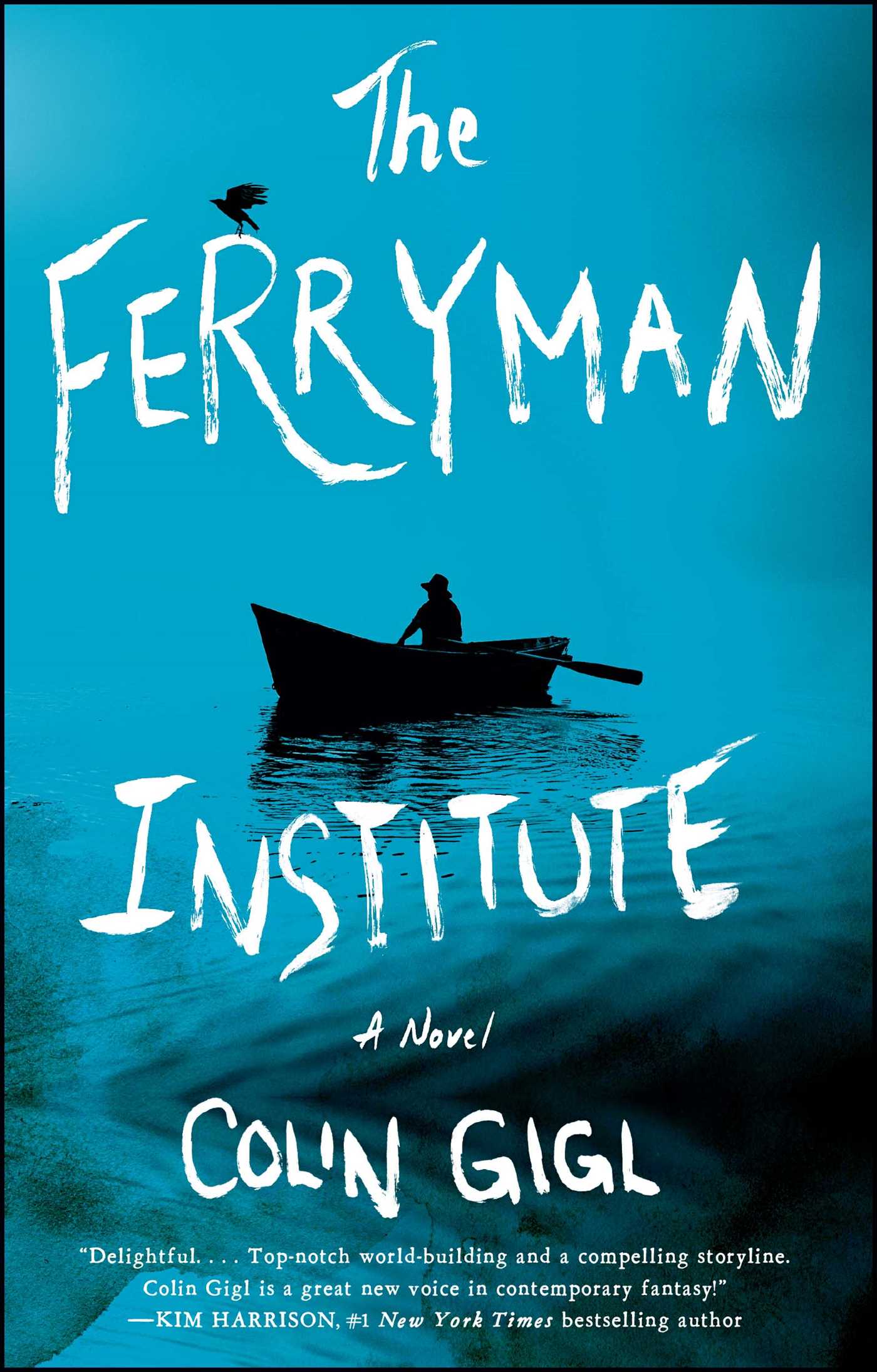 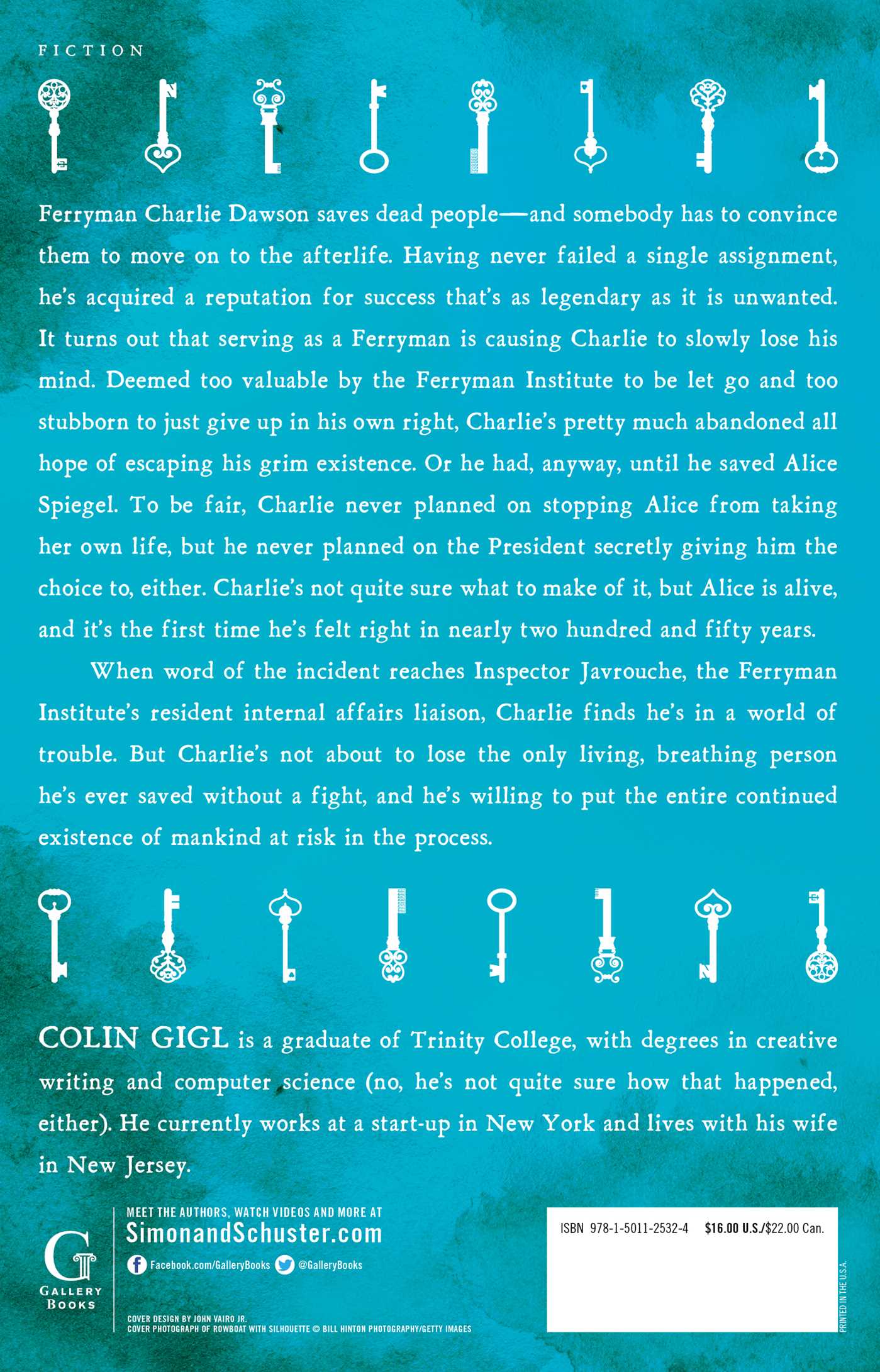 In this stunning, fantastical debut novel from a bold new voice in the bestselling traditions of Christopher Moore and Jasper Fforde, a ferryman for the dead finds his existence unraveling after making either the best decision or the biggest mistake of his immortal life.

Ferryman Charlie Dawson saves dead people—somebody has to convince them to move on to the afterlife, after all. Having never failed a single assignment, he's acquired a reputation for success that’s as legendary as it is unwanted. It turns out that serving as a Ferryman is causing Charlie to slowly lose his mind. Deemed too valuable by the Ferryman Institute to be let go and too stubborn to just give up in his own right, Charlie’s pretty much abandoned all hope of escaping his grim existence. Or he had, anyway, until he saved Alice Spiegel. To be fair, Charlie never planned on stopping Alice from taking her own life—that sort of thing is strictly forbidden by the Institute—but he never planned on the President secretly giving him the choice to, either. Charlie’s not quite sure what to make of it, but Alice is alive, and it’s the first time he’s felt right in more than two hundred years.

When word of the incident reaches Inspector Javrouche, the Ferryman Institute's resident internal affairs liaison, Charlie finds he's in a world of trouble. But Charlie’s not about to lose the only living, breathing person he’s ever saved without a fight. He’s ready to protect her from Javrouche and save Alice from herself, and he’s willing to put the entire continued existence of mankind at risk to do it.

Written in the same vein as bestselling modern classics such as The Eyre Affair by Jasper Fforde and A Dirty Job by Christopher Moore, The Ferryman Institute is a thrilling supernatural adventure packed with wit and humor.


Suicides were Charlie Dawson’s least favorite part of the job for two reasons. The first was the inherent tragedy of the whole thing. Death was never pleasant, but there was a pretty dramatic gulf between an eighty-year-old man passing peacefully in his sleep and a young woman demonstrating her outlook on life via an exit wound blown out her skull. The second reason was that suicide assignments were never easy. There were few guarantees in the Ferryman world, but that was certainly one of them.

The young woman currently standing in front of Charlie—Alice Spiegel, according to the report—seemed awfully casual for someone who was about to call time on her life. She’d straightened up her room, changed her clothes (not that Charlie was watching, of course—or, maybe he was, but he was trying not to . . . mostly trying not to), and lightly made up her face. It was only after she ran out of mundane things to procrastinate over that she walked into her closet. She reappeared several minutes later, the handle of a silver box held tightly in her right hand. Alice set the case down on her bed, carefully lifted the top, and pulled out the implement of her impending demise.

Charlie couldn’t say what type of handgun she produced, matte black and heavy in her dainty hands. He was willing to bet it fired bullets, though, which currently topped the list of things that mattered at the moment. Alice’s eyes, half lidded and calm, studied how the gun nestled in her fingers, flipping her hand back and forth in the subdued light cast by her desk lamp. Satisfied, she slammed a clip into the pistol, cocked it, and flicked off the safety, all with a remarkable nonchalance.

No, tonight was definitely not going to be easy.

There was no anxiety in the way Alice carried herself across the room, no nerves on display as she sat behind her desk. Charlie peeked at his watch. Just under a minute now. With a shake of his head, he pulled out the president’s envelope from inside his suit jacket. A golden seal had been pressed over the flap, an embellished key—the president’s insignia—embossed in the wax. He’d been told in his initial briefing that said envelope would only open when it was supposed to . . . which, as instructions went, was about as useful as a sandwich bag on the moon. It was his first Presidential Assignment—a corporate classification he didn’t even know officially existed until an hour ago—and he was in no mood to blow it.

Truth be told, Charlie was having trouble figuring out what was so special about this case. There didn’t seem to be any wrinkles to it (girl gets gun, girl ends life—undoubtedly tragic, but not exactly unique), and he’d handled far more heart-wrenching suicides than this. Still, the assignment came directly from the president of the Ferryman Institute, which had to mean something. That’s what he hoped, anyway.

A small pop shifted Charlie’s focus back to the envelope in his hand. Unlike moments ago, the top flap now waved gently free, the seal having split and fallen to the floor in two identically sized pieces. As Charlie watched, the two halves silently disintegrated, each one fading away into nothingness.

There’s my cue, he thought.

He gripped the contents of the envelope and pulled, expecting the letter inside to slide right out. It didn’t. Out of the corner of his eye, Alice was bringing the gun up to her right temple. Charlie tried again with the same emasculating result. Man, how did they stick this in here? he wondered, all the while yanking furiously on the piece of paper inside.

Charlie’s mind, masochistic as ever, began to prepare the explanation he’d inevitably have to give the president detailing his failure on the assignment. Yes, sir, I couldn’t get it out of the envelope, sir. Yes, sir, very stuck, sir. Only King Arthur would have been able to pull it out, sir. No, sir, I can assure you I have absolutely no pride or dignity left to speak of. That sounded about right. However, just as he’d resigned himself to that humiliating fate, the letter popped free of its standard number 10 prison.

Charlie stole a glance at the time. Twenty seconds and counting.

The piece of paper inside had been folded in half. Almost immediately, it opened of its own accord. He began to read.

Charlie wasn’t sure what he’d been expecting, but it definitely wasn’t this.

The letter inside contained nine words handwritten in big, bold letters on an otherwise blank sheet. Charlie read it, then read it again. Nine stupidly simple words, and he still couldn’t believe what they said.

There was a horrifying moment where Charlie’s mind seemed to shrivel up and disappear. It was as if having the ability to think had been nothing but a pleasant memory, erased in an instant by two measly sentences. Thankfully, his faculties returned quickly enough. Not so thankfully, they’d essentially taken to running around inside his head with their hair on fire.

It was a wholly unbelievable choice he was being given, in the most literal sense of the word. But it was a no-brainer, wasn’t it?

With a fluid but frantic swoop, his hand dove into the interior pocket of his jacket, a place it had gone many, many times before, and wrapped around his Ferryman Key.

Acting purely on instinct, he drew the key out and tossed it underhand toward Alice Spiegel’s desk. Charlie only realized after the key was well out of his hand that his plan (possibly a strong word for it) hinged on the need for an absolutely perfect throw. Willie Mays, Charlie was not.

Everything in that moment, time included, seemed preoccupied with his Ferryman Key as it arced through the air. Charlie felt like there wasn’t a single detail that escaped him. He watched intently as Alice noticed the key in her peripheral vision. The gun dipped ever so slightly as her focus shifted to the golden object first sailing past her head, then clattering loudly against her desk. It was impossible for Charlie not to see her look of undiluted shock reflected in the mirror when it skidded to a stop. It was also impossible to miss her reaction when their eyes locked in the mirror. Without his key, she could see him now, standing behind her, staring at her, a stranger suddenly consuming the reflection. And the look in her eyes . . . Charlie knew that to be a dangerous one.

She spun around to face him with an undeniable grace. In that fraction of a second, Alice shifted the barrel of the gun from caressing her skull and instead leveled it at him.

She held it there, her body in a sloppy Weaver stance, her breath frantic, her arms trembling. Charlie needed to defuse the situation, and fast. The unfortunate truth, however, was that in his haste to come up with the first part of his plan, he’d failed to consider anything beyond that. Throw key on desk? Check. Get her attention? Check. Panic because he didn’t know what to do now? Sure, might as well check that off, too.

“Uh, you have a very nice bedroom,” he said, mainly because he had no idea what else to say. In terms of first impressions, it was probably not Charlie’s finest work.

A magnificently loud BLAM cut off any follow-ups to that with a well-placed bullet straight to his forehead.

Charlie Dawson’s head snapped back, his whole body tumbling with it. The instructions he was holding in his left hand went flying into the air. He caught a glimpse of the paper, now parallel to the ceiling, right before his world went dark.

Written in bold black letters on that ordinary sheet of paper were those nine, short words:

BE A FERRYMAN OR SAVE THE GIRL. YOUR CHOICE. 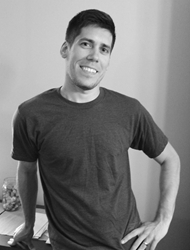 Colin Gigl is a graduate of Trinity College with degrees in creative writing and computer science (no, he’s not quite sure how that happened, either). He currently works at a start-up in New York and lives with his wife in New Jersey.