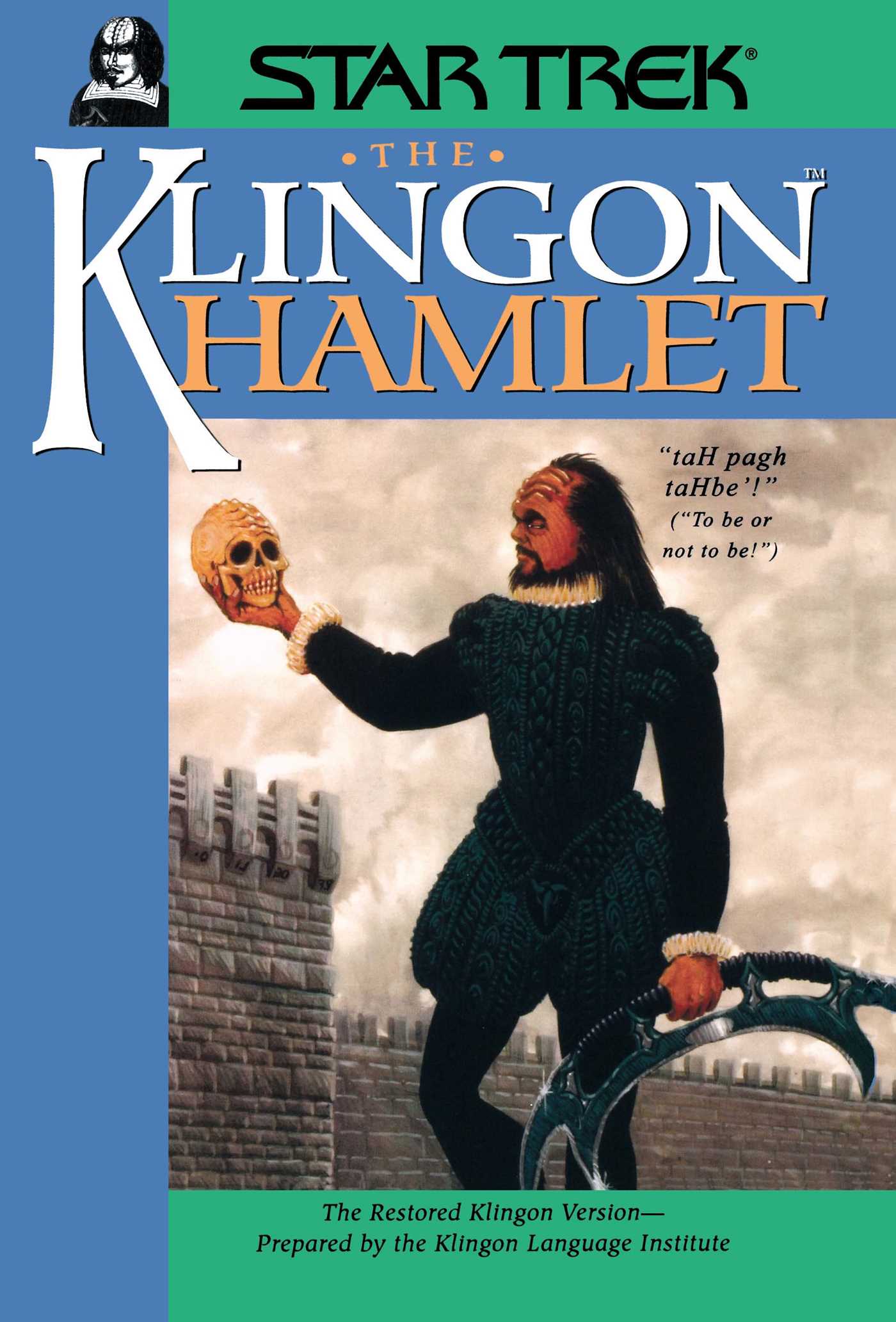 For too long, readers throughout the Federation have been exposed to The Tragedy of Khamlet, Son of the Emperor of Qo'nos, that classic work of Klingon literature, only through inadequate and misleading English translations. Now at last, thanks to the tireless efforts of the Klingon Language Institute, this powerful drama by the legendary Klingon playwright, Wil'yam Shex'pir, can be appreciated in the elegance and glory of its original tongue.
This invaluable volume contains the complete text of the play, along with an English translation for easy consultation and comparison. In addition, an incisive introduction explains the play's crucial importance in Klingon culture, while copious notes illustrate how the debased English version diverges from the original, often distorting and even reversing the actual meaning of the verses.
Khamlet, the Restored Klingon Version, is a work that belongs in the library of every human who hopes truly to understand what it means to be Klingon.

HAMLET, son to the late, and nephew to the present King

A Servant to Horatio

SCENE I Elsinore. A platform before the castle.

Francisco: Nay, answer me: stand, and unfold yourself.

Francisco: You come most carefully upon your hour.

Francisco: For this relief much thanks: 'tis bitter cold,

And I am sick at heart.

Bernardo: Have you had quiet guard?

Francisco: Not a mouse stirring.

If you do meet Horatio and Marcellus,

The rivals of my watch, bid them make haste.

Francisco: I think I hear them. Stand, ho! Who is there?

Horatio: Friends to this ground.

Marcellus: And liegemen to the Dane.

Francisco: Give you good night.

Who hath reliev'd you?

Francisco: Bernardo has my place.

Give you good night.

What, is Horatio there?

Horatio: A piece of him.

Marcellus: What, has this thing appear'd again to-night?

Bernardo: I have seen nothing.

And will not let belief take hold of him

Touching this dreaded sight, twice seen of us:

Therefore I have entreated him along

With us to watch the minutes of this night;

That if again this apparition come,

He may approve our eyes and speak to it.

And let us once again assail your ears,

That are so fortified against our story

What we have two nights seen.

Horatio: Well, sit we down,

And let us hear Bernardo speak of this.

Bernardo: Last night of all,

When yon same star that's westward from the pole

Had made his course to illume that part of heaven

Where now it burns, Marcellus and myself,

The bell then beating one, --

Marcellus: Peace, break thee off; look, where it comes again!

Bernardo: In the same figure, like the king that's dead.

Marcellus: Thou art a scholar; speak to it, Horatio.

Bernardo: Looks it not like the king? mark it, Horatio.

Horatio: Most like -- it harrows me with fear and wonder.

Bernardo: It would be spoke to.

Horatio: What art thou, that usurp'st this time of night,

Together with that fair and warlike form

In which the majesty of buried Denmark

Did sometimes march? by heaven I charge thee, speak!

Marcellus: It is offended.

Bernardo: See, it stalks away!

Marcellus: 'Tis gone, and will not answer.

Bernardo: How now, Horatio! you tremble and look pale:

Is not this something more than fantasy?

What think you on't?

Horatio: Before my God, I might not this believe

Without the sensible and true avouch

Of mine own eyes.

Horatio: As thou art to thyself:

Such was the very armour he had on

When he the ambitious Norway combated;

So frown'd he once when, in an angry parle,

He smote the sledded Polacks on the ice.

Marcellus: Thus twice before, and just at this dead hour,

With martial stalk hath he gone by our watch.

Horatio: In what particular thought to work I know not;

But in the gross and scope of my opinion,

This bodes some strange eruption to our state.

Marcellus: Good now, sit down, and tell me, he that knows,

Why this same strict and most observant watch

So nightly toils the subject of the land;

And why such daily cast of brazen cannon,

And foreign mart for implements of war;

Why such impress of shipwrights, whose sore task

Does not divide the Sunday from the week;

Doth make the night joint-labourer with the day:

Who is't that can inform me?

Horatio: That can I;

At least, the whisper goes so. Our last king,

Whose image even but now appear'd to us,

Was, as you know, by Fortinbras of Norway,

Thereto prick'd on by a most emulate pride,

Dar'd to the combat; in which our valiant Hamlet --

For so this side of our known world esteem'd him --

Did slay this Fortinbras; who, by a seal'd compact,

Well ratified by law and heraldry,

Did forfeit, with his life, all those his lands,

Which he stood seiz'd of, to the conqueror:

Against the which, a moiety competent

Was gaged by our king; which had return'd

To the inheritance of Fortinbras,

Had he been vanquisher; as, by the same cov'nant,

And carriage of the article design'd,

Of unimproved mettle hot and full,

Hath in the skirts of Norway, here and there,

For food and diet, to some enterprise

That hath a stomach in't: which is no other --

As it doth well appear unto our state --

But to recover of us, by strong hand,

So by his father lost: and this, I take it,

Is the main motive of our preparations,

The source of this our watch, and the chief head

Of this post-haste and romage in the land.

Bernardo: I think it be no other, but e'en so:

Well may it sort, that this portentous figure

Comes armed through our watch; so like the king

That was and is the question of these wars.

Horatio: A mote it is to trouble the mind's eye.

In the most high and palmy state of Rome,

The graves stood tenantless, and the sheeted dead

Did squeak and gibber in the Roman streets:

As, stars with trains of fire and dews of blood,

Disasters in the sun; and the moist star,

Upon whose influence Neptune's empire stands,

Was sick almost to doomsday with eclipse:

As harbingers preceding still the fates

And prologue to the omen coming on, --

Have heaven and earth together demonstrated

Unto our climatures and countrymen. --

But soft, behold! lo, where it comes again!

I'll cross it, though it blast me -- Stay, illusion!

If thou hast any sound, or use of voice,

If there be any good thing to be done,

That may to thee do ease and grace to me,

If thou art privy to thy country's fate,

Which, happily, foreknowing may avoid,

Or if thou hast uphoarded in thy life

Extorted treasure in the womb of earth,

For which, they say, you spirits oft walk in death,

Marcellus: Shall I strike at it with my partisan?

Horatio: Do, if it will not stand.

We do it wrong, being so majestical,

To offer it the show of violence;

For it is, as the air, invulnerable,

And our vain blows malicious mockery.

Bernardo: It was about to speak, when the cock crew.

Horatio: And then it started like a guilty thing

Upon a fearful summons. I have heard,

The cock, that is the trumpet to the morn,

Doth with his lofty and shrill-sounding throat

Awake the god of day; and at his warning,

Whether in sea or fire, in earth or air,

The extravagant and erring spirit hies

To his confine: and of the truth herein

This present object made probation.

Marcellus: It faded on the crowing of the cock.

Some say that ever 'gainst that season comes

Wherein our Saviour's birth is celebrated,

The bird of dawning singeth all night long:

And then, they say, no spirit dares stir abroad;

The nights are wholesome; then no planets strike,

No fairy takes, nor witch hath power to charm;

So hallow'd and so gracious is the time.

Horatio: So have I heard,and do in part believe it.

But, look, the morn, in russet mantle clad,

Break we our watch up: and, by my advice,

Let us impart what we have seen to-night

Unto young Hamlet; for, upon my life,

This spirit, dumb to us, will speak to him:

Do you consent we shall acquaint him with it,

As needful in our loves, fitting our duty?

Marcellus: Let's do't, I pray; and I this morning know

Where we shall find him most conveniently.