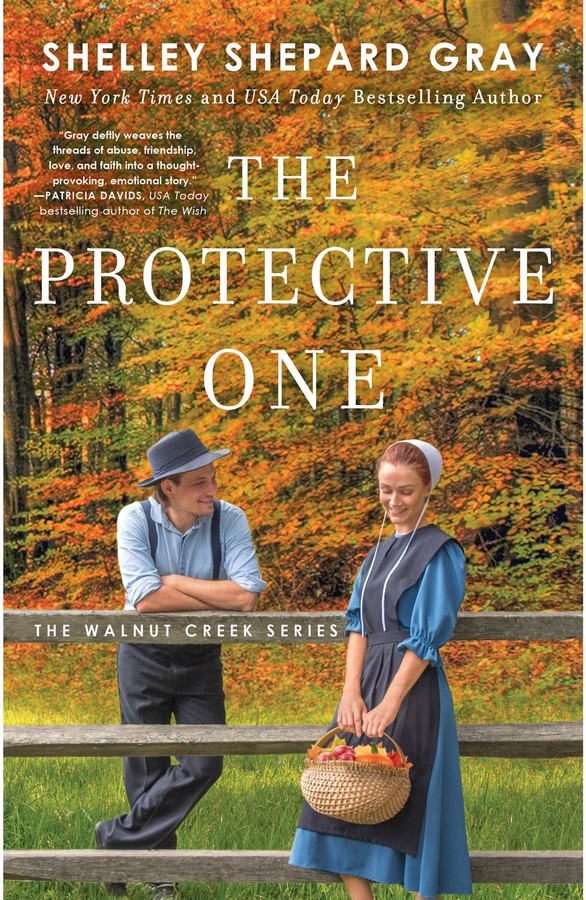 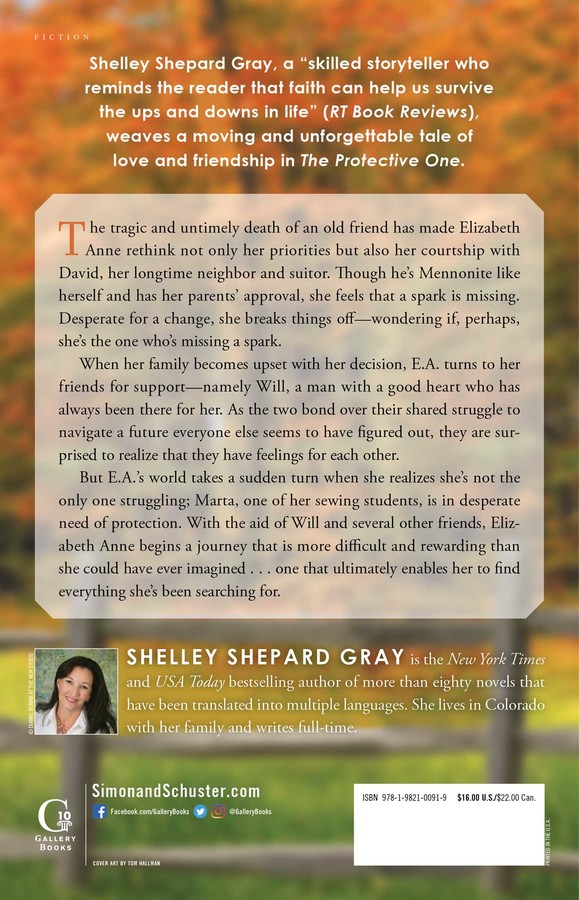 From a “skilled storyteller who reminds the reader that faith can help us survive the ups and downs in life” (RT Book Reviews), Shelley Shepard Gray weaves a moving and unforgettable exploration of love and friendship.

The tragic and untimely death of an old friend has made Elizabeth Anne rethink not only her priorities but her courtship with David, her longtime neighbor and suitor. Though he’s Mennonite like herself and has her parents’ approval, she feels that a spark is missing. Desperate for a change, she breaks things off—wondering if, perhaps, she’s the one who’s missing a spark.

When her family becomes upset with her decision, E.A. turns to her friends for support. One of them is Will, a man with a good heart who has always been there for her. As the two bond over their shared struggle to navigate a future that everyone else seems to have figured out, they are surprised to realize that they have feelings for each other.

But E.A.’s world takes a sudden turn when she realizes that she’s not the only one struggling—Marta, one of her sewing students, is in desperate need of protection. With the aid of Will and several other friends, Elizabeth Anne begins a journey that is more difficult and rewarding than she could have ever imagined...one that ultimately enables her to find everything she’s been searching for.

In this latest installment in the Walnut Creek series that “both delights and surprises” (Leslie Gould, bestselling author), Shelley Shepard Gray pens a powerful and poignant tale of friendship, courage, and love.

Funerals and marriages. Elizabeth Anne had once heard her mother proclaim that these two events always brought people together.

As she stood off to the side in the vestibule of Marie Hartman’s—now Marie Byler’s—church, E.A. reckoned her mother had been right. She might have been standing by herself, but she wasn’t alone. The space was filled with longtime friends and both John’s and Marie’s families. And in the midst of all of them she could easily spy the rest of her best friends in the world, known as the Eight.

This time, they’d all come together for a wedding or two of their own. But not too long ago, they’d gathered together for a far more heart-wrenching occasion: Andy Warner’s funeral.

That day had been painful in so many ways. They’d each been grief-stricken by Andy’s sudden death and perhaps were feeling far more alone, because his funeral had accomplished what their best intentions never had: it had brought all of them together for the first time in years.

Still remembering that stark sense of loss like it was yesterday, E.A. shivered. It had been July. Scorching hot, and they’d all been wearing black. But as she’d stood with the rest of the Eight on Andy’s parents’ front lawn, she’d been chilled. Only seven of them stood together. They would never be a true “Eight” ever again.

It hadn’t surprised her that everyone else felt the same way. Standing there on that lawn, they’d all vowed to stay in better touch. Yes, a lot of those promises had stemmed from guilt, because Andy had committed suicide.

However, those promises had also come from someplace else. Someplace deep and true. A place that had as much to do with true long-lasting friendships as private losses. With the fact that their friendship had transcended everyone else’s expectations about how so many different people could remain so close for years and years.

It was during that moment on the lawn that they’d all promised to each other to be better friends. And, amazingly, in the past eighteen months, that had happened. Marie had moved back to Walnut Creek. John B. and Will had stopped putting their careers first and now never said no to group gatherings. All of them had let their guards down and shared secrets that they’d previously only kept to themselves.

And now, here they were, celebrating a wedding. Marie, their very own English homecoming queen, had just married John Byler, who’d grown up Amish.

It seemed that love really did conquer all.

Now E.A. was cooling her heels in the vestibule before it was time to go into the reception. Looking down at her pale pink bridesmaid dress, she couldn’t help but frown again. Though it was a pretty dress, and rather modest, she never would have picked it. No freckle-faced redhead would ever willingly choose to wear pink.

“What’s got you looking so irritated, E.A.?” Katie asked as she walked toward her with her husband, Harley. Harley was wearing a black coat and black trousers, looking like a slightly spiffier version of his usual self. Katie was wearing a dark blue dress that she’d sewn herself. Harley and Katie were both Amish, and while they were also in the bridal party, Marie had been respectful of their preferences for conservative dress.

Though it was vain and selfish, E.A. couldn’t help but look at Katie’s gown with longing. The blue dress matched Katie’s eyes. It would have matched her eyes, too.

“Oh, nee. Was I truly looking that irritated?” She really hoped Marie’s mother hadn’t seen her looking like that. Mrs. Hartman had a lot of expectations about this day, and that included how her daughter’s bridesmaids acted.

“A little bit,” Harley murmured. His lips twitched—it was obvious he was fighting off a smile.

“Sorry. It wasn’t about anything important. I was just thinking about how much I hate to wear pink.”

Katie gave her a sympathetic look. “You look nice in that color.” When E.A. raised her eyebrows, Katie blushed. “I mean, it ain’t that bad.”

“Come on. This color is somehow managing to make me look both washed-out and sunburned at the same time.”

And just like that, all of E.A.’s sudden worries about being on Mrs. Hartman’s radar vanished. She burst out laughing. “You’ve got me there. An orange dress would have looked worse.” Folding her arms over her chest, she asked, “So, what’s going on? Does Mrs. Hartman need us to do something?” Marie’s mother hadn’t been shy about telling the bridal party what to do.

“Oh, nee. Nothing like that.” After sharing a small smile with her husband, Katie said, “Harley and I came over here to ask you something.”

Harley answered, “Elizabeth Anne, me and the guys were just talking about who was going to give a proper wedding toast for John and Marie.” He paused.

When he didn’t say anything more, E.A. looked at Harley curiously. “All right … that makes sense. So, who is going to speak?”

“Well, now … ” He cleared his throat. “You see, we started talking. After a bit, we came to a decision.”

He folded his hands behind his back. “We think you should do the honors.”

Her? No way. She was good at organizing things. But standing up in front of everyone and giving a speech? It honestly made her feel a little ill. Hoping to keep her expression neutral, E.A. said, “Katie, you are Marie’s matron of honor. Plus, everyone knows how good you are at telling stories. Shouldn’t you do it?”

Katie looked sympathetic but stayed unwavering. “I would, but everyone is thinking of a specific tale to tell, you see.”

“A specific story? Wow. So, um, which one are you all thinking of?” she asked, though it was all an act. There was only one really good story she could tell about Marie and John.

Harley grinned. “You know which one I’m referring to. The night Marie got her crown.”

She’d been afraid of that. That episode didn’t exactly put her in the best light. Sometimes she didn’t think it put any of them in the best light. However, it really was a perfect tale to highlight Marie’s and John’s longtime affection for each other.

“Do you really think it’s the best story to share on their wedding day?”

Even though she was dallying, E.A. added, “Even in front of their parents?”

Make that “in front of all the Eights’ parents.” Oh, her mom was going to be so mad.

“Come on. You know we’re right.” Katie, all five foot two inches of her, looked up at E.A. “Please?”

What could she do?

“Really.” Thinking about standing in front of two hundred people, telling an embarrassing story while also wearing an unflattering pink dress, didn’t exactly make her feel good, but this day wasn’t about her, anyway. It was about Marie and John. And the Eights’ long-standing friendship. “I can’t promise that I’ll do a great job, but I’ll try my best.”

Katie grabbed her hand. “Come on. Let’s go tell the others.”

E.A. let herself be tugged. But even though her feet were moving, the rest of her wanted to hedge a bit. “Do we really need to go right this minute?”

“Oh, for sure.” Harley nodded. “Sorry, E.A. The reception is about to start.”

Elizabeth Anne let herself be dragged down the narrow hallway to the large fellowship hall where the reception was being held. Catching sight of Logan and Will, she gave them a little thumbs-up.

Logan grinned and put both of his thumbs in the air. Throwing one arm around Logan’s shoulders, Will smiled broadly at her.

Suddenly, all her doubts and fears drifted away.

It didn’t matter what she was wearing, or how good she was at speaking in front of large groups of people.

All that mattered was the memory of one night, almost eight years ago, when she’d gotten a frantic phone call from Marie. And how she, in turn, had done something that turned one quiet night into an adventure none of them would ever forget.

Now she simply had to hope that she wouldn’t leave a single part of it out. If she was going to tell this story, one thing was certain: she had to do it right. 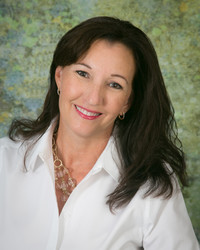 A practicing Lutheran, Shelley Shepard Gray is the New York Times and USA TODAY bestselling author of more than eighty novels, translated into multiple languages. In her years of researching the Amish community, she depends on her Amish friends for gossip, advice, and cinnamon rolls. She lives in Colorado with her family and writes full time.

“A slow-burning, enjoyable romance… Embedded in this quaint story is a poignant message about the importance of community, compassion, and doing what’s right rather than what’s easy. The author’s fans and newcomers alike will enjoy this appealing tale.”

“Gray deftly weaves the threads of abuse, friendship, love, and faith into a thought-provoking, emotional story.”

“Filled with heartbreaking and uplifting moments, this love story stars Elizabeth Anne, or 'E.A.,' as she reevaluates her life… Now, E.A. must go on a heart-opening journey that may lead her to everything she's been searching for.”

More books in this series: Walnut Creek Series, The