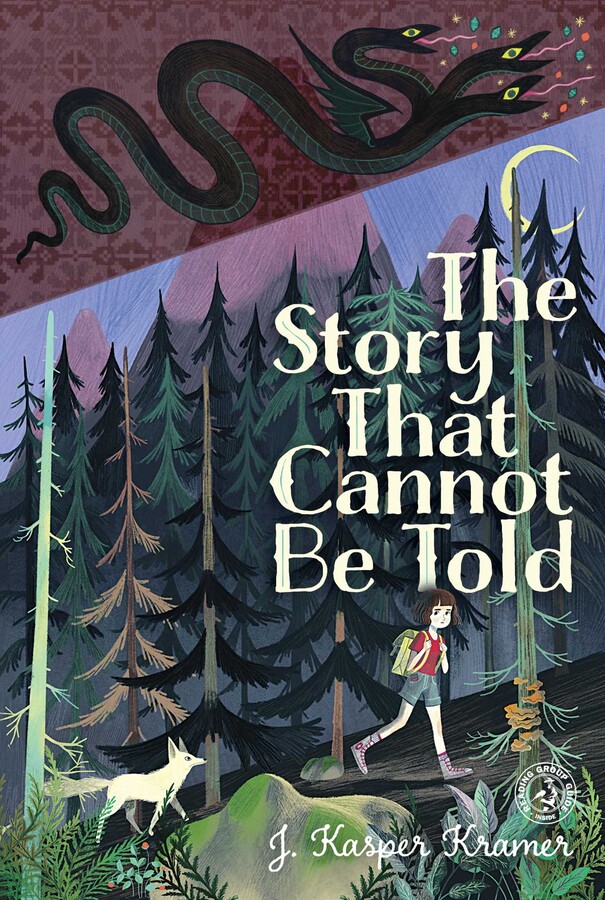 “By turns surprising, poetic, and stark, The Story That Cannot Be Told is one that should most certainly be read.” —Alan Gratz, New York Times bestselling author of Refugee
“A mesmerizing debut.” —Publishers Weekly (starred review)

A powerful middle grade debut with three starred reviews that weaves together folklore and history to tell the story of a girl finding her voice and the strength to use it during the final months of the Communist regime in Romania in 1989.

Ileana has always collected stories. Some are about the past, before the leader of her country tore down her home to make room for his golden palace; back when families had enough food, and the hot water worked on more than just Saturday nights. Others are folktales like the one she was named for, which her father used to tell her at bedtime. But some stories can get you in trouble, like the dangerous one criticizing Romania’s Communist government that Uncle Andrei published—right before he went missing.

Fearing for her safety, Ileana’s parents send her to live with the grandparents she’s never met, far from the prying eyes and ears of the secret police and their spies, who could be any of the neighbors. But danger is never far away. Now, to save her family and the village she’s come to love, Ileana will have to tell the most important story of her life.

“Once upon a time, something happened. If it had not happened, it would not be told.” This is how The Story That Cannot Be Told begins, and what follows is a lushly imagined work of historical fiction. Growing up in the shadow of communist Romania, ten-year-old Ileana is a storyteller, entertaining herself by writing stories in her Great Tome. But when her uncle, Andrei, disappears after being labeled a terrorist for writing protest poetry, Ileana’s parents decide that stories are dangerous; they send her into hiding with her grandparents in a rural mountain village. By interweaving Ileana’s story with the stories of her family and a retelling of the Romanian folktale known as “Cunning Ileana,” J. Kasper Kramer has crafted an unforgettable story about family, courage, and the power of storytelling.

1. In the author’s note, J. Kasper Kramer reveals that the book is set in Romania 1989. Identify specific details in the text that could help you figure out the date and location of the story. What else would you like to learn about that time period?

2. During the time of this story’s setting, Romania was a communist country. What was life like for Romanians under the communist regime? Why would they want to rebel against the leader? What was dangerous about Uncle Andrei’s poetry? What “dangerous” ideas can you identify in the stories that Ileana writes in her Great Tome?

5. Describe the differences between Ileana’s life with her parents in the city of Bucharest and her life with her grandparents in a rural mountain village. If you were Ileana, would you prefer living in Bucharest or the small village? Explain your answer.

6. Why do you think the village children are cruel to Ileana when she first arrives? Why might the people in the village have a hard time trusting one another? What advice would you have for Ileana? How might you and your classmates make a new student feel welcome?

7. What advice does Uncle Andrei give Ileana when he leaves? Why is it difficult for her to follow it? What would you have done if you were Ileana? Explain your answer.

9. In what ways do the people in the village come together to help one another? How does feeling like a part of a community begin to change Ileana? What people or places make you feel like you belong? Explain your answer.

10. What are the lessons in each of the stories that Ileana’s grandparents tell her, including “Tataie’s Three Coins” and “Mamaie and the Evil Box”? How does Ileana react to hearing them?

11. Ileana’s grandmother has many superstitions. List and explain some of her superstitious beliefs. Do you or does anyone you know believe in superstitions? Why do you think these notions exist?

12. Describe Ileana’s friendship with Gabi. What brings them together? How do they work together? What do you think might have happened if Ileana had never trusted Gabi?

13. What do the Securitate mean when they tell the villagers that they have been “chosen for systemization”? Explain how this is an example of a euphemism. How will this affect the villagers’ lives? Are they given a chance to share their opinions?

14. What is “The Story That Can Not be Told” about? Refer to “Into the House of the Witch” as well. Explain what Old Constanta means when she says the story is a code. Why do you think the author chose to title her own book this way?

15. Ileana’s uncle trusts her with his manifesto for safekeeping. What is a manifesto? With your classmates, develop a classroom manifesto that declares your collective goals and beliefs. Why do you think someone would sign their name to a manifesto? What do you think the government would do if they had Uncle Andrei’s manifesto?

16. Ileana’s father tells her not to resist the Securitate. Why do you think he wants her to turn over the manifesto? Why does she refuse? What would you have done if you were in her position?

17. Why is it essential for a culture to have storytellers? Why might a government try to control which stories are allowed to be told? Can you think of any real-world examples?

1. The Story That Cannot Be Told contains several animals that have symbolic meaning in folktales, myths, and legends: a white wolf, a dragon, and an owl. What do each of these creatures symbolize in the novel? Research the symbolism of one of these animals in stories from several different cultures, including Romania.

2. Research the story’s historical time period. How did the Romanian dictator, Nicolae Ceausescu, come to power? How and why was he overthrown? In the story, Ileana and Gabi receive news of protests by listening to Radio Free Europe on a forbidden radio. You can see photos of key events referenced in the book through the Radio Free Europe site (https://tinyurl.com/y8e3czkm). Work with a partner to write a script for a radio program alerting the public to one of these key events. Think about the style of the radio format, and your intended audience. What is most important for them to know? What are you asking them to do?

3. Interwoven throughout the novel is a retelling of the Romanian folktale of Ileana Cosânzeana, or “Cunning Ileana.” The author uses this story as an allegory for Ileana’s own heroic journey. Compare the “Cunning Ileana” story with details from Ileana’s real-life story, illustrating the connections between the two tales. Share your findings with your classmates.

4. What are the characteristics of a folktale? Create a graphic chart or poster that explains how the “Cunning Ileana” story reflects these characteristics. Then brainstorm an idea for your own folktale that includes these elements.

6. Both Uncle Andrei and Ileana are considered dangerous because they are writers. How can poetry, fiction, art, music, film, and theater be a form of protest or resistance? Research a writer or artist whose works became a form of protest. What were they protesting? How did their work raise awareness? Did they face any persecution or criticism as a result? As a starting point, the Poetry Foundation has curated a collection of protest poems that can be found here: https://tinyurl.com/y3zncdu6

7. At the end of the book, Ileana observes that, “The truth is, sometimes it’s not just the world, but your eyes that have changed.” What does she mean by that? Think about an event that changed the way you see the world, and write your own story about that time.

8. Extension Activity: Compare this novel to George Orwell’s allegory of Russian communism, Animal Farm. How is the regime of the Great Leader similar to the regime of Napoleon and the pigs? What lessons do both books teach about resistance and protest? How do they impact your views of the world?

The Lexile reading level has been certified by the Lexile developer, MetaMetrics® 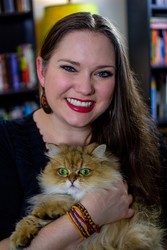 J. Kasper Kramer is an author and English professor in Chattanooga, Tennessee. She has a master’s degree in creative writing and once upon a time lived in Japan, where she taught at an international school. When she’s not curled up with a book, Kramer loves researching lost fairy tales, playing video games, and fostering kittens. Visit her at JKasperKramer.com.

“By turns surprising, poetic, and stark, The Story That Cannot Be Told is one that should most certainly be read.”—Alan Gratz, New York Times bestselling author of Refugee

“Stories have immense power to change lives. J. Kasper Kramer’s beautiful novel is proof of that. A compelling story of a history that should never be forgotten.”—New York Times bestselling author Jennifer A. Nielsen

* “Kramer's debut novel is rich with connections to today's world while easily sidestepping the pitfall of heavy-handedness. Ileana is a charming, complex character who stumbles and makes mistakes as she builds up confidence, bravery, and wisdom against a wonderfully imagined backdrop populated with fascinating secondary characters. . . . A thrilling, emotional tale of one girl's experience of the fall of Communism in Romania.”

“Romanian fairy tales and folktales are intertwined with historical fiction to create a tale rich in imagery, emotion, and strength when it’s most needed.”

“Kramer captures the tense, frightening atmosphere in the months preceding the Romanian Revolution, as well as the different forms of bravery that went into toppling an oppressive government. . . . An affecting account of a historic event characterized by monsters, hope, and the power of words.”