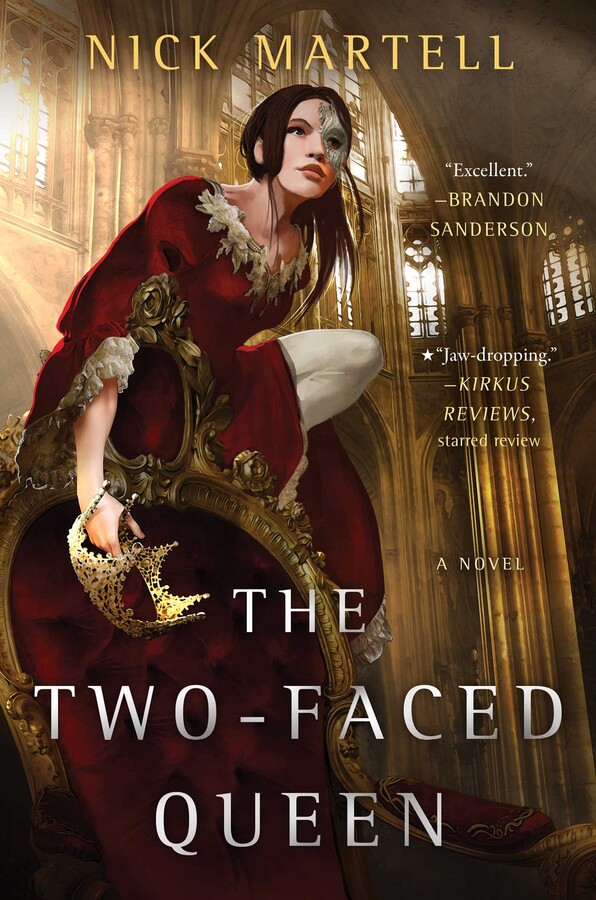 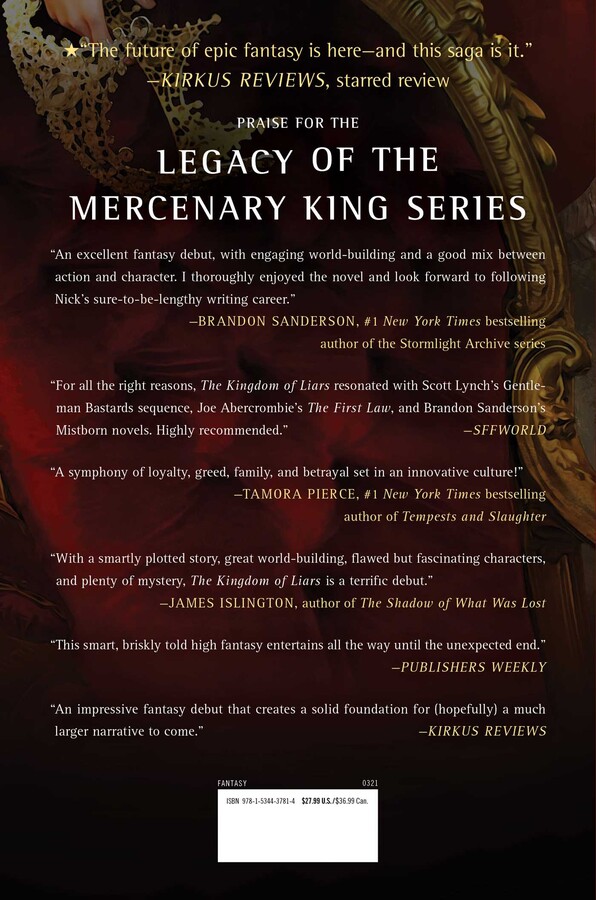 Book #2 of The Legacy of the Mercenary King
By Nick Martell
LIST PRICE $27.99

The Hollows is gripped in unrest and on the brink of civil war as an insurgency of anarchists rise, and brother and sister vie for the throne in the second novel in the critically hailed Legacy of the Mercenary King series which Brandon Sanderson called “excellent.”

Michael Kingman thought he was going to die by the executioner’s axe, forever labeled as a traitor. Still alive, and under the protection of the Orbis Mercenary company, Michael and his family and friends are deeply involved in the seemingly rival conspiracies that are tearing The Hollows apart. With the death of the King, both the Corrupt Prince and his sister Serena are vying for the throne, while the Rebel Emperor is spreading lies amongst the people, and all of them want Michael dead. This is a story of betrayal, murder, and rebellion, and in this direct sequel to the debut novel The Kingdom of Liars, also some hope for justice.

For readers who love the intrigue and widening scope of epic fantasy like Sanderson’s Mistborn and Week’s The Black Prism, you will find your next must-read fantasy series. 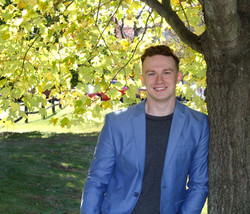 Nick Martell is the author of The Kingdom of Liars.

* “Simply put, this series is a masterclass in grand-scale storytelling. The future of epic fantasy is here—and this saga is it.”—Kirkus, Starred Review

"The secrets, lies, betrayals (including to himself) all make for a read that is one to pay attention to. Something like PKD and Wolfe teaming up to write City State Fantasy." –Tor.com

“Nick Martell is well on his way to becoming a huge talent in the world of fantasy fiction.”—The BiblioSanctum

“As the second book in a series, The Two-Faced Queen heeds the call admirably, the story is advanced, tension is raised. Martell’s storytelling skills are still of a very high caliber.” —SFFWorld

"The Two-Faced Queen is a BIG book (592 pages), so that’s George R.R. Martin territory. But readers will be rewarded with a rich fantasy world that reminds me a little of the imaginative environments created by Robert Jordan or Brandon Sanderson... Make no mistake, this book works quite well as a standalone."—The Sarasota Scene

“Now, this is how you write a sequel. There's some truly satisfying and explosive moments in this book, including one that actually saw my jaw dropping open in shock.”—Jeremy Szal, author of Stormblood

“An excellent fantasy debut, with engaging worldbuilding and a good mix between action and character.  I thoroughly enjoyed the novel, and look forward to following Nick’s sure-to-be lengthy writing career.”

“A symphony of loyalty, greed, family, and betrayal set in an innovative culture!”

"With a smartly plotted story, great world-building, flawed but fascinating characters and plenty of mystery, The Kingdom of Liars is a terrific debut."

—James Islington, author of The Shadow of What Was Lost

"A richly rewarding fantasy that seethes with mysteries, fuzed with a mindscrew of a magic system. This, dear readers, is the good stuff."

"Nick Martell’s debut The Kingdom of Liars lives up to its name, with so many truths and lies interwoven that nothing is as it seems and surprises lurk across every turn of the page. Michael’s tale is nothing, if not thrilling."

—Ryan Van Loan, author of The Sin in the Steel

“This smart, briskly told high fantasy entertains all the way until the unexpected end.”

Book #2 of The Legacy of the Mercenary King
By Nick Martell
LIST PRICE $27.99

More books in this series: The Legacy of the Mercenary King