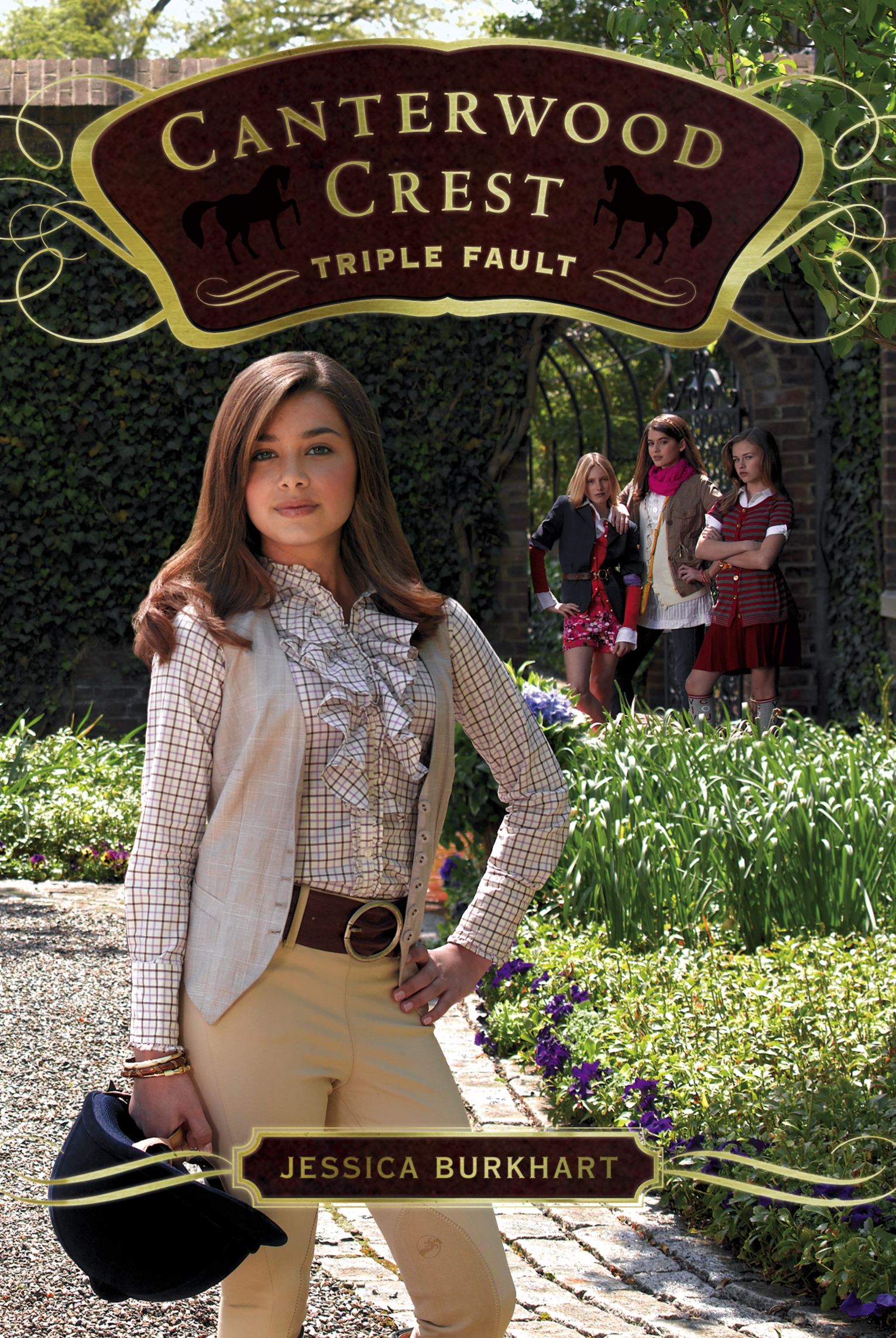 In Chasing Blue, Sasha and her horse, Charm, have proven that they’re worthy competitors for the elite Canterwood Crest equestrian team. Things are definitely looking up . . . until Sasha finds out who her riding partner for the semester is: her archnemesis, Queen Bee Heather. Not. Good. And when Heather starts spending a little too much QT with Sasha’s almost-boyfriend, Jacob, the partnership is put to the ultimate test. The tension builds in Behind the Bit when Sasha and her team are accepted to a prestigious horse clinic. Can Sasha and Callie work together when it counts?

Triple Fault 1 SWAK. ALMOST.
JUST SAY IT, I TOLD myself. answer him. I shifted on the tack trunk outside Charm’s stall. You’re supposed to reply when someone asks if they can kiss you. But with Eric just inches from my face, staring at me expectantly, I could barely think, let alone formulate a whole sentence.

My horse, Charm, snorted as he looked down at us like he too was waiting to hear my answer. And the truth was, right now I wasn’t thinking about how my ex–best friend Callie and my almost-boyfriend Jacob had betrayed me. Or how I’d almost blown my chance in front of the Youth Equestrian National Team scouts. I knew for sure what my answer was—I wanted to kiss Eric.

And by the ecstatic look on his face, it was clear that he knew what I was thinking.

His black hair fell over one eye as he leaned closer to me. I ignored the whooshing sound in my ears and the nerves making my stomach swirl. Eric’s lips were about to touch mine. My eyes fluttered shut.

Our heads jerked up.

Mr. Conner! Our riding instructor’s boots thudded down the aisle.

“Omigod!” I whispered, jumping up off the tack trunk. I stumbled sideways and Eric stood up to grab me—keeping me upright. I tried to will the flush out of my cheeks.

“Gee, thanks!” I hissed, my cheeks still hot.

Mr. Conner walked up to us. He stopped and his dark eyes zeroed in on me!

Eric shot me an it’s-cute-when-you-dork-out look and I mushed my lips closed.

“Okay,” Mr. Conner said, staring at me for a second.

I squirmed. Did I have an I-almost-kissed-a-boy look on my face?

I draped one arm over Charm’s stall door and leaned against it, trying to look casual.

“Eric, I need your help finding some paperwork for the scouts before they leave,” Mr. Conner said.

Stop talking! I yelled to myself.

Mr. Conner looked at me again, shaking his head slightly, before walking back down the aisle.

Eric began to follow him, but then turned back to look at me. “Very cool,” he mouthed.

I rolled my eyes, but I couldn’t help grinning. When Mr. Conner and Eric were gone, I slumped against Charm’s stall door. Life as a famous actress was not in my future.

“Hey,” Paige Parker, my friend and roommate, said as she walked up to me. “Ready to go back to the room?”

Earlier in the afternoon, Paige had come to the stable to watch me ride in the demonstration for the YENT scouts, but she had no idea how much drama had gone down behind the scenes.

“I’ll meet you there,” I said. “I just need a few minutes with Charm.” And to wait for Eric.

Paige nodded. “Okay.” She paused, almost like she suspected something was wrong, but I gave her a bright smile before she left.

I slipped into Charm’s stall and hugged his neck. He blinked sleepily as I rubbed his blaze and reached up to straighten his chestnut mane. I almost had to stand on my tiptoes to reach up by his ears. Even for a Thoroughbred/Belgian mix, he was tall.

“I almost kissed Eric!” I whispered giddily to Charm. Not even the awful things that had happened today could erase my this-close-to-kissing excitement.

“Look,” I told Charm, “I know our ride got messed up because I was upset about Jacob, but the scouts said that they thought I was just nervous—so that’s good.”

There were still up to three open YENT seats for the five of us on the Canterwood advanced team. If Charm and I wowed the scouts at the upcoming June tryouts, we had a chance. If not, our YENT dreams were over.

I flipped open my phone. It was Eric.

I wanted to see Eric now. But wait. Then we might actually . . . kiss. And now that I’d had time to think about it, I was starting to wonder if I was prepared enough. I had no clue how to kiss a boy—what if I was horrible? Now I was glad Mr. Conner had interrupted us. I needed kissing tips stat.

As I headed for the exit, horses and riders began trickling into the aisle from the arena. Visiting students had armfuls of blankets, tail wraps, and leg bandages to prepare their horses for the trip home. I ducked my head, suddenly wishing I was invisible—there were too many people I didn’t want to run into. But as I skirted around a blue roan mare in crossties, I turned a sharp corner and almost slammed right into Callie and Jacob.

I held back a groan. Jacob’s eyes flicked from me to the ground.

“Sasha, please,” Callie said. Her voice sounded wobbly and her pink eyes told me that she’d definitely been crying. “Can’t we just—”

“Sash,” Jacob pleaded. His gray-green eyes finally connected with mine. He really did look sorry, but I didn’t care.

It killed me to see them standing next to each other—so familiar and easy. The worst part was that they had been going behind my back this whole time. Callie had even been mad at me because she thought I’d been interested in Eric. Which, at the time, I wasn’t. At the time, all I could think about was Jacob. And I guess all Jacob was thinking about was Callie.

I shook my head and, sidestepping Callie, walked out the door. I shivered in the chilly March air and wrapped my arms across my chest. The campus was eerily quiet. Most of the Canterwood students wouldn’t be back from midwinter break until tomorrow. The sun, which had been bright during testing, had slipped behind a fat gray cloud. I kicked a patch of dry brown grass with my boot. I didn’t know how to feel. One second I was giddy from my almost kiss with Eric. And the next I wanted to curl up in a ball because of what Callie and Jacob had done.

For the first time in a while, I wished I were home. Mom would bring me raspberry tea in bed and Dad would sing embarrassing old-people songs and play air guitar to make me laugh. But now it was too late to go home—classes started on Monday.

I didn’t want to think about sitting through English class with Callie. Some best friend. If only I had a class with Eric instead. Just thinking about him made me smile. I’d been all about Jacob for months—so much that I’d missed noticing what a cute, smart, and amazing guy Eric was. Until today, I’d only thought of Jacob in that way. Ugh. Did not want to think about Jacob.

I yanked open the door of Winchester Hall and stepped into the warm hallway. The cheery yellow walls didn’t make me feel any better. I just wanted to hide in my room.

Trudging past the common room, I stopped when a girl’s voice pierced the stillness of the hallway.

“Do NOT drag my Coach luggage! And hurry up. I’d like to be moved in before the semester is over.”