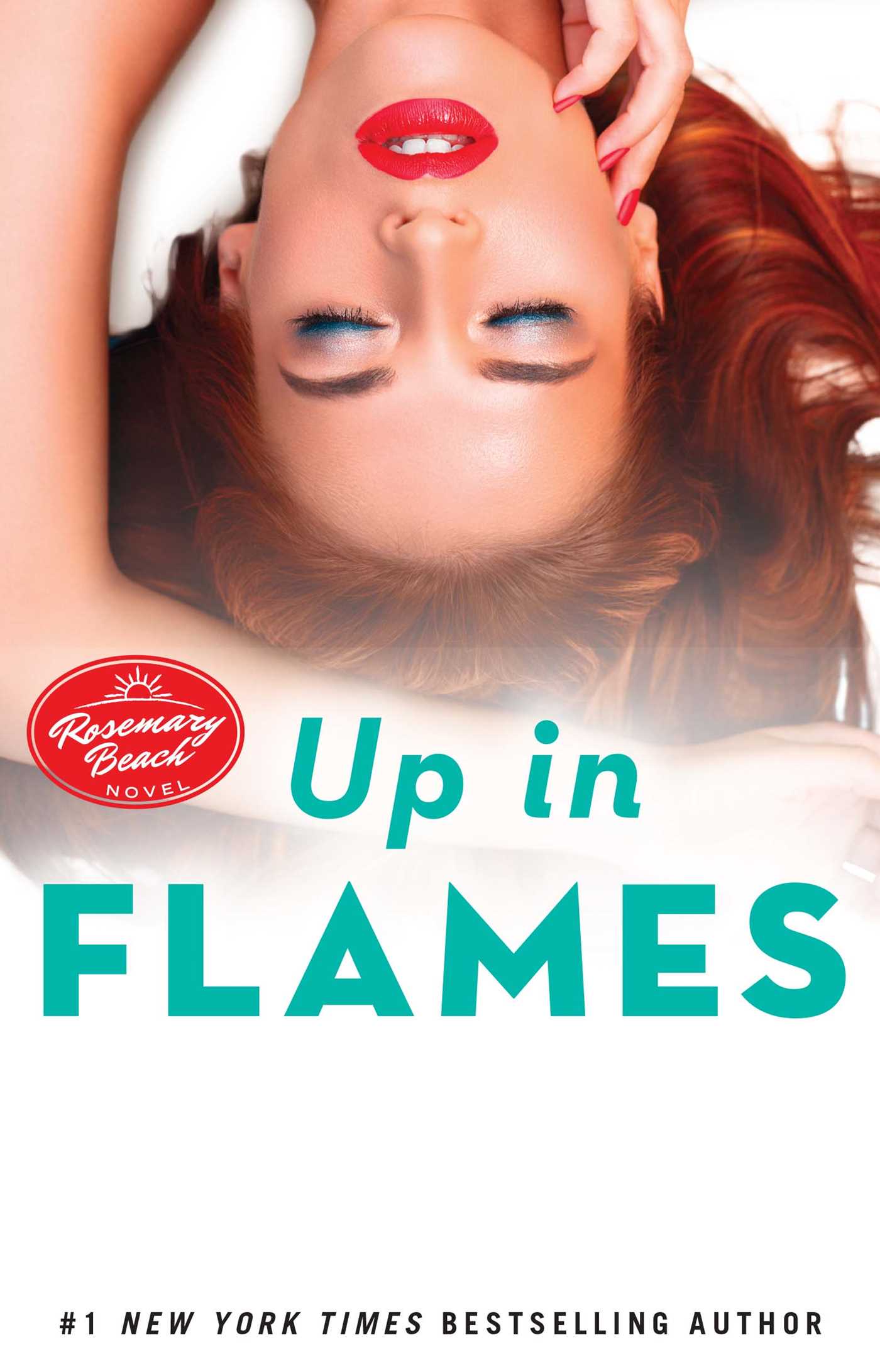 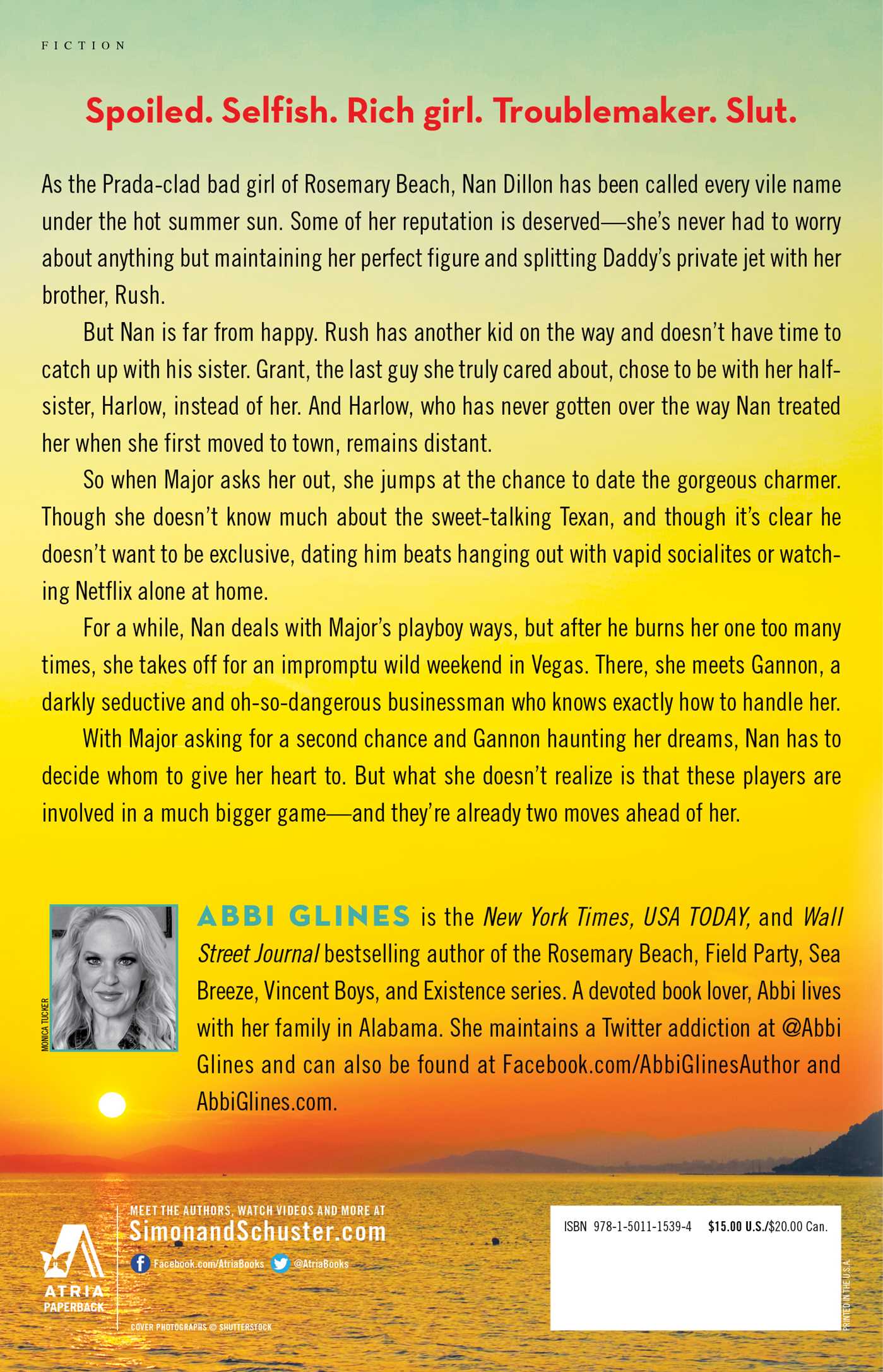 As the Prada-clad bad girl of Rosemary Beach, Nan Dillon has been called every vile name under the hot summer sun. Some of her reputation is deserved—she’s never had to worry about anything but maintaining her perfect figure and splitting Daddy’s private jet with her brother, Rush.

But Nan is far from happy. Rush has another kid on the way and doesn’t have time to catch up with his sister. Grant, the last guy she truly cared about, chose to be with her half-sister, Harlow, instead of her. And Harlow, who has never gotten over the way Nan treated her when she first moved to town, remains distant.

So when Major asks her out, she jumps at the chance to date the gorgeous charmer. Though she doesn’t know much about the sweet-talking Texan, and though it’s clear he doesn’t want to be exclusive, dating him beats hanging out with vapid socialites or watching Netflix alone at home.

For a while, Nan deals with Major’s playboy ways, but after he burns her one too many times, she takes off for an impromptu wild weekend in Vegas. There, she meets Gannon, a darkly seductive and oh-so-dangerous businessman who knows exactly how to handle her.

With Major asking for a second chance and Gannon haunting her dreams, Nan has to decide who to give her heart to. But what she doesn’t realize is that these players are involved in a much bigger game—and they’re already two moves ahead of her.

Up in Flames Nan
Men pissed me off. In my experience, they always wanted something from me, but it was never really me they wanted. I knew it without giving them more than a moment of my time. When they looked at me, they saw “daughter of a rock star” and “money.” Most of them were just hoping I’d get them on the cover of a cheap gossip magazine.

This left me with little to no respect for the male species. I held only one man in high regard, and that was my brother, Rush. He had always been there for me when I needed him—except for a few times when I was a raging bitch to his wife, Blaire. But now that I was over my jealousy, Rush was back to being my rock. And it was enough for me that he was happy.

I knew it was time that I grew up and fought my own battles. I wasn’t doing a fantastic job of it, but I wasn’t doing too badly, either. I was managing things. In my own way . . .

My phone vibrated in my hand, and I looked down to see Major’s face on the screen. This was my newest bad idea. He was gorgeous and almost too sweet for me—I usually liked at least a little bit of drama—but what kept him from being too perfect was the fact that he was a player. He loved women. Craved the attention he got from them. He thought I was too stupid to know that when he wasn’t with me, he was usually with someone else, but his acting skills weren’t as foolproof as he thought. I could tell by the way he responded to my texts if he was with someone else or if he had time for me.

I thought I was dealing with this reality pretty well, but it was getting harder to keep my heart in check and not fall for his pretty-boy charms. His kindness was getting to me, even though I knew I was nothing more than another girl to him.

What are you doing?

This was the kind of text I usually got when he was alone and bored. At first, I had thought he was genuinely interested in the answer, but after noticing how often the words hey sweetie and babe flashed across the screen of his phone when we were together, I knew that was all bullshit.

All men were liars. Even the bighearted, pretty ones.

I didn’t trust men, but unfortunately, I needed them in my life. I wished I weren’t always so needy for affection and attention, but I was. I hated that about myself, and I often tried to hide it, but it was getting harder to do that. Watching Rush abandon his playboy ways for the right woman and seeing his best friend—and my onetime fuck buddy—Grant Carter, turn into the perfect man for his wife, Harlow, hadn’t been easy. I wasn’t a Blaire or a Harlow. I didn’t inspire men to want to change for me. Admitting that hurt deeply, but it was something I was coming to terms with.

Anger, self-loathing, and feelings of inadequacy can make a person hateful. Bitter. A monster.

That’s exactly what I didn’t want to become.

As much as I wanted to ignore Major, I knew I wouldn’t. Replying to him meant he’d give me attention, and then I could pretend for a moment that he had feelings for me. That I was worth more. That I was the kind of girl a guy would change for.

Just waking up, I replied, as I sat up in bed.

The text bubble that always popped up when someone was in the middle of replying showed up on the screen, and my stomach did a little flutter thing. He was alone. He was thinking about me.

Yes, I know, I sound pathetic, but I’m being honest here.

Sleepyhead. What time did you go to bed last night?

The better question would be what time did he go to bed last night. He hadn’t texted me after eight p.m., and I had too much pride ever to text or call him first. His last text had been distracted, and I assumed he was with someone else.

Late, was my simple response. The truth was, I had sat on my sofa, cuddled up alone under a blanket, watching season three of Gossip Girl and eating popcorn that I would have to run off this morning.

What were you doing up late?

That kind of question always annoyed me. He felt like he could just ask me anything because he knew I’d give him a real answer. but I could never straight-up ask him what he was doing, because I knew I’d only get part of the truth—usually the part that didn’t involve another girl.

Watching TV. I didn’t feel like lying to make him jealous. I had realized long ago that Major didn’t do jealous where I was concerned, which sometimes felt like a slap in the face. Yet another thing I always forgave him for, just because he was so damn nice.

He knew my two favorite shows. He remembered everything about me. Which was yet another thing that complicated things for me.

I’m good, he texted, with a winky face. He was the only guy I knew who used emojis. At first, I thought it was weird, but I expected it now. It was just Major being Major. He could make things acceptable that normally weren’t sexy.

And I was afraid, maybe just a little, that I loved him.

More books in this series: The Rosemary Beach Series