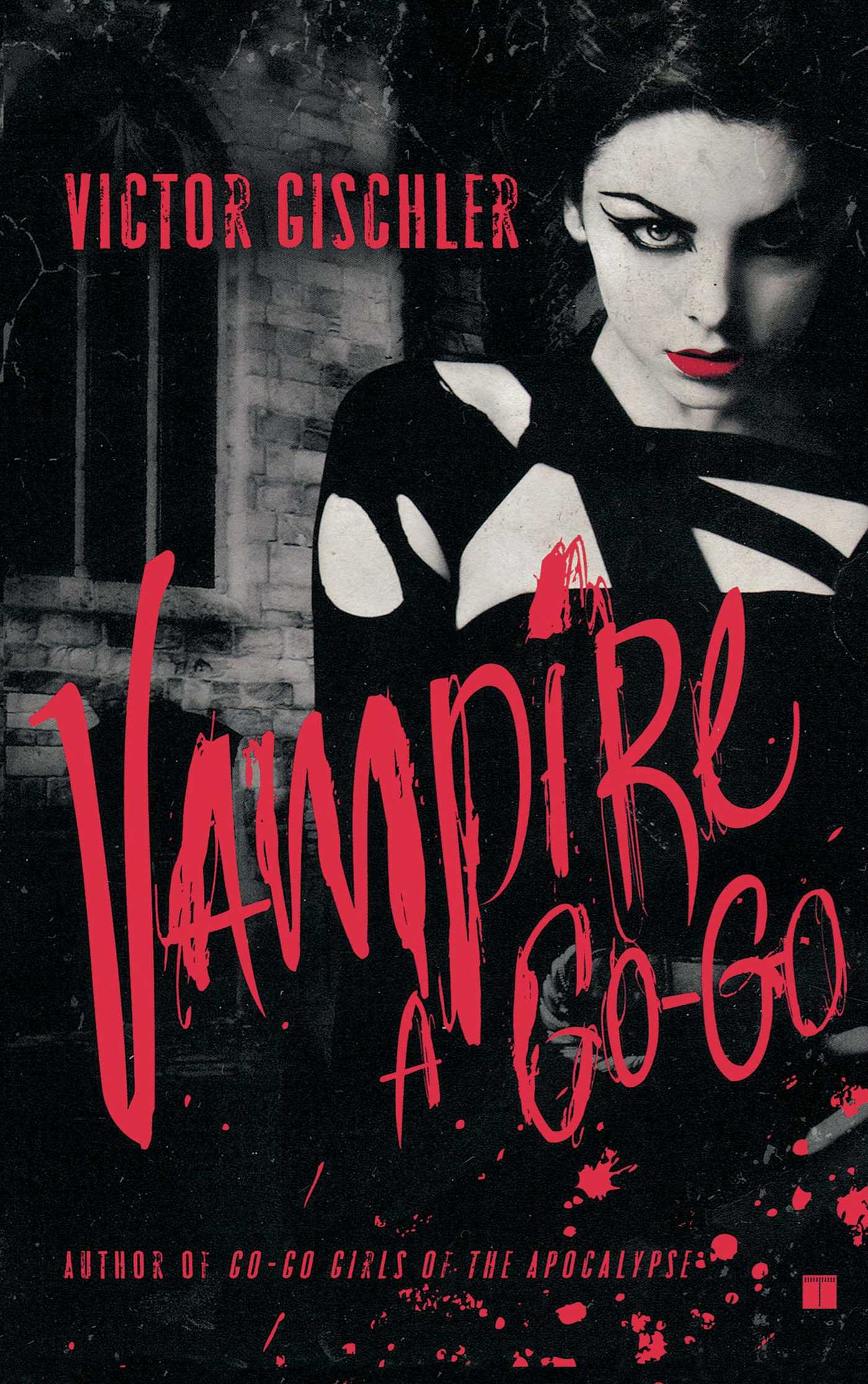 Just as Go-Go Girls of the Apocalypse was a “raucous thrill ride” (Publishers Weekly) and a playful stab at the post-apocalypse story, Vampire a Go-Go is a satirical take on the modern horror story—providing more laughs and unforgettable characters.

Victor Gischler is a master of the class-act literary spoof—a unique niche in which he has few equals. He has tackled many popular genres with his wry wit: crime noir, the post-apocalyptic subgenre, and now the horror novel genre. Frequently compared to Kurt Vonnegut, Thomas Pynchon, and Quentin Tarantino, Gischler turns his attention to castles, astrologers, alchemists, ghosts, witches, gun-toting Jesuit priests, and werewolves with Vampire a Go-Go, a hilarious romp of spooky, gothic entertainment. Allen is a hapless grad student in trouble. He’s about to flunk out of school and there is not much that can be done to salvage his GPA—except to redeem himself by accompanying an eccentric professor and his enigmatic wife on a research trip to a castle in Prague. But Allen doesn’t know he’ll end up in a hunt for a supernatural device that can restore the humanity to the undead. Narrated by a ghost whose spirit is chained to the mysterious castle, Vampire a Go-Go is full of twists and surprises that will have readers screaming—and laughing—for more.

The sudden shrill chirp of a hundred birds froze Allen in place, his hand poised to knock on the department head’s door. Probably it was his imagination, but then he heard it again. Maybe Dr. Carpenter had one of those soothing rain-forest-sounds CDs.

It didn’t matter. He’d been summoned.

He knocked, heard somebody mumble something. He entered.

“Shut the damn door,” she yelled at him.

Allen hastily shut the door, stood cringing amid the bird storm, feathers brushing his face, the room alive with the swirling racket of wings and beaks.

“Sit down.” Professor Cathy Carpenter gestured at the hard, wooden chair across her desk.

She sat too, took a small wooden box from her top desk drawer, and began to unpack the contents. A plastic baggy, paper.

“You didn’t have a very good semester, did you, Allen?” She unfolded a small square of thin paper, pinched the herb from a plastic baggy, and rolled it into the paper. The joint was on the small side.

“There were some distractions,” Allen told her.

“Any relation to the Salem Cabbots? Good family.”

“No, ma’am.” He flinched as a bird swooped within an inch of his nose. The rest of the birds screeched and danced.

“The mayor’s an old student of mine. Winston Cabbot of Salem. Hmmm. Winston of Salem. Winston Salem. That’s odd. Isn’t that a cigarette or something?”

Allen ducked another bird on a strafing run.

“So Winston is what? Your uncle or something?” Carpenter raised an eyebrow.

“Do you have any matches?” She fished around in the other drawers.

“Professor Carpenter, there are like a hundred birds in your office. Maybe more.”

She found matches, struck one, lit the joint, and puffed smoke.

She stood, sucked deep on the joint, then went around the room, puffing smoke into the budgies’ faces. After three minutes of this, the birds settled into sedate lines along the bookshelves.

Professor Carpenter returned to her seat. “You earned straight Cs in your classes.”

Allen didn’t feel he could tell Professor Carpenter about Brenda Cole. The entire episode had been juvenile and ill advised. Allen had known from the start that Brenda had been too much girl for him, a senior in Warner’s poetry workshop, a rebellious girl in a black dress and combat boots and a nose ring and all those great tattoos in interesting places. They’d had three great weeks before she’d dumped him flat on his ass, and Allen had spent the rest of the semester embarrassing himself with pathetic phone calls and bleeding-heart emails, trying to win her back.

“There was a lot going on, Professor Carpenter. I fixed it.”

Above him, the birds sat in a long line, looking down, hunched together like old men, some absurd jury listing to his feeble story.

“Why did you choose Gothic State University, Allen?”

The small university perched atop a rocky precipice overlooking the Pacific Ocean. The institute was undistinguished in every way. The English Department’s one claim to fame had been a nationally renowned Brontë scholar named Thornton Hardwood. It was Hardwood who’d lured Allen to Gothic State. Allen loved the Brontës, wanted to write his dissertation on gender coding in Wuthering Heights.

Hardwood had died suddenly of a stroke six days into Allen’s first semester. Allen had stayed through the second semester because he hadn’t applied to any other schools and hadn’t known what else to do. Brenda had happened the third semester, and Allen’s scholarly ambitions had dropped straight into the crapper.

“Uh-huh.” A budgie landed on Dr. Carpenter’s coffee mug. The mug had a novelty message that read, “I earned tenure, and all I got was this lousy coffee mug.” Carpenter rubbed the budgie’s head with her pinky finger. “Hello, Admiral Snodgrass.”

“You can tell all the birds apart?”

“All the budgies are named Admiral Snodgrass.”

“I’m going to give you a chance, Allen. You’ll have to bring your grades up, but I’m willing to keep your name off the academic probation list.”

“I appreciate that, ma’am.”

“Wait and hear the rest,” she said. “It’s well known around the department you have a gift for research.”

Allen nodded. During his first semester, he had taken Professor Mapplethorpe’s research methods class and had immediately become teacher’s pet. Mapplethorpe had spread it among the faculty that “the boy can dig anything out of a library.” Allen constantly endured harsh comments on his papers for sloppy writing, but his research skills were impeccable.

“I’m going to assign you as Dr. Evergreen’s grad assistant.”

Allen squirmed in his seat, opened his mouth to object, closed it again. What choice did he have?

Dr. Evergreen was known campuswide as a cranky hard-ass. He stank of bad cigars and gin. He was an unpleasant and demanding man, and most students only took his classes when forced to complete degree requirements.

Budgies cooed in a ganja stupor.

“He’s writing a chapter for a new monograph on Kafka.” Carpenter stubbed out the joint in a ceramic ashtray. “You’re to go with him to Prague this summer and help him with research. It’s not a vacation. He’ll work you hard.”

“Prague? The Czech Republic? That Prague?”

“I was going to visit my folks this summer.”

“Good. Go to the party at Evergreen’s house tonight. Grad students are invited, so you won’t feel out of place. Tell him you’re on board.”

Allen stopped himself from sighing. “Okay.”

“Go away now, please.” Carpenter relit the joint, sat back in her chair, and closed her eyes.

I didn’t like Allen at first. With instantaneous knowledge of his entire life, I figured I knew all I needed to make this judgment. He’s a little weak, lets people push him around. He’s apologetic when he hasn’t done anything. He means well in a way somehow more annoying than if he meant harm. You know the type. Always hanging at the edge of a conversation, waiting to be invited to talk.

Allen has a bad habit of ignoring nice, bookish sorts of girls right under his nose. They like him. He’s good-looking and well mannered, with brown hair, wavy and thick, a medium-square jaw and shoulders. Tallish. An open face given to a shy, reluctant grin full of straight white teeth. But Allen ignores the plain Janes in favor of exotic, fast women who ignore him, or worse, chew him up.

Perhaps I despise him for this, since I used to chase the same sort of woman. Ages and ages ago.

But having the sum total of a man’s life inserted into your head like a computer memory stick isn’t the same as experiencing the man or seeing him in action—or often, unfortunately, inaction. Walk a mile in his shoes—or his skin—well, sympathies develop. So I suppose I ended up rooting for Allen, hoping he’d get through all this in one piece.

It’s not my job to take sides, but I am a thinking being, and I do have an opinion.

Still, it would be nice if Allen could get his head straight about women. One of these quiet, girl-next-door types could do his self-esteem a world of good.

“I like that one,” said Penny Coppertone as she sat on the edge of Allen’s narrow bed.

Allen’s dorm room was small, and there was nowhere to sit but the bed. The single chair overflowed with textbooks and dirty laundry. Allen was one of the few grad students still living in the dorms. He couldn’t afford an apartment on his own and didn’t want a roommate.

“This one?” He held the muted red tie up to his shirt, then held up a narrower blue tie. “Not this one.” He wanted to look right for Evergreen’s party.

“Actually, why don’t you wear the black shirt with the tweed and no tie at all,” Penny suggested. “I think that will strike the right tone.”

“Professionally academic but off duty and ready for a glass of wine.”

“I’m going to Prague, Penny. Did I mention that?”

“What? That’s wonderful. When? This summer? That’s when the summer writing workshops are. In July, I think. I haven’t been accepted yet, but I’m hoping—”

Penny’s face fell, all the way to the ground. She tried to pick it up again without success. “Well, but still … it could be fun.”

Allen spared her a sideways glance as he slipped into his jacket. “With Dr. Evergreen?”

“You’d better hurry and change if you still want a ride.”

Penny’s hand automatically went to her dishwater hair, pulled the ponytail loose. “Actually, I was already—” She looked down at her Gothic State sweatshirt and faded jeans, heavy wool socks and Birkenstocks. “I mean, yeah, I guess I’d better get dressed. I might be a while. How about I meet you there?”

“Okay, but hurry, or all the food will be gone.”

Penny Coppertone was an excellent poet, but her images were quiet and subtle. If her poetry had been about sexual exploration and explosive rants against the establishment, and if Penny had died her hair jet-black and gotten her nose pierced, Allen would have been all over her.

Men can be dumbfucks. If I had it to do all over again …

But of course I don’t. 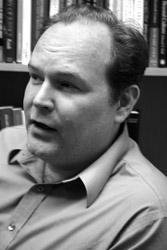 Victor Gischler is a former English professor and the author of Gun Monkeys, The Pistol Poets, Suicide Squeeze, and Shotgun Opera.