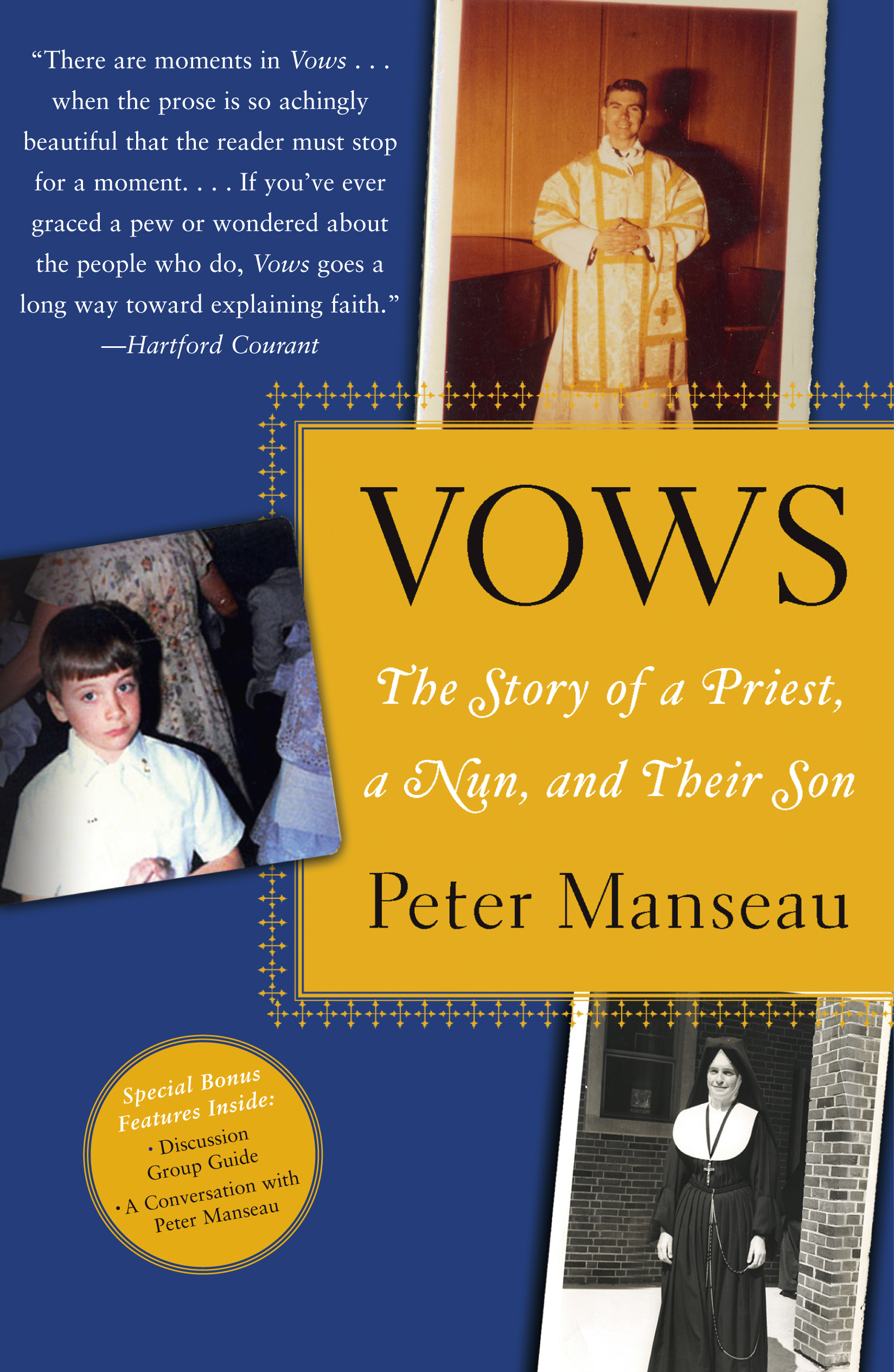 The Story of a Priest, a Nun, and Their Son

Vows is a compelling story of one family's unshakable faith that to be called is to serve, however high the cost may be. Peter Manseau's riveting evocation of his parents' parallel childhoods, their similar callings, their experiences in the seminary and convent, and how they met while tending to the homeless of Roxbury, Massachusetts, during the riot-prone 1960s is a page-turning meditation on the effect that love can have on profound faith.

READING GROUP GUIDE   VOWS The Story of a Priest, a Nun, and Their Son
Peter Manseau


Vows: The Story of a Priest, a Nun, and Their Son
Peter Manseau

1. Is Vows a story of vows made, or vows broken? How would you describe this book—as a love story, a religious journey, or both? Discuss the symbolism of the title, and the dual meaning that is implied.

2. Author Peter Manseau follows his mother and father through their childhoods, details their years of religious training, and recreates their inner worlds. How, as a writer, does Peter accomplish this? How does he give voice to each individual character? Discuss the unique use of language and narrative structure in Vows.

3. If the Manseaus’ story had been told by someone other than their son, how might it have been different? Would you have felt differently about these characters had you read about them in a newspaper, or heard about them on the news? And if so, do you think you would have been more or less interested? Sympathetic? Opinionated?

4. Peter believed that his family had been shaped “first and foremost by the fact of [his] father’s vocation”—until he uncovers the evidence of his mother’s scandalous secret in the form of correspondence, press clippings, and legal documents. Discuss the journalistic process through which Peter learns the truth about his mother . . . and his own family history.

5. Mary’s religious training dates back to her early years at St. Margaret’s Elementary where she was taught—as the school pamphlet from the time puts it—“the love of God, and all that love implies and demands in the way of self-control and obedience to the Ten Commandments and the practice of Catholic truth.” In your opinion did Mary follow or stray from these teachings throughout the course of her life? Discuss the evolution of Mary’s religious identity.

6. It can be said that the one thing every religion has in common is storytelling—from the Greco-Roman myths to the Old and New Testaments. What is so powerful about a story? How sacred is the written word? What can be revealed from the Manseaus’ story? Is there a “moral” to Vows?

7. Many stories have emerged in recent times about the subject of sexuality in the priesthood. How, if at all, does the story of William Manseau’s time in the seminary change or confirm your ideas about the state of the Church in America? Discuss the ways in which Vows puts such controversial issues as the sex-abuse scandal, celibacy, homosexuality, gay marriage, even abortion into new context.

8. What questions are you left with after reading Vows—about William and Mary Manseau, the author, and yourself? How might  you, as a group, go about answering them? Do you think the subject of religion is best kept private? Or do you believe that discussing our beliefs can help us to better understand, respect, and tolerate one another? 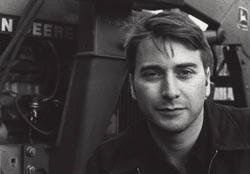 Peter Manseau is the author of Vows and coauthor of Killing the Buddha. His writing has also appeared in The New York Times Magazine, The Washington Post, and on National Public Radio's All Things Considered. A founding editor of the award-winning webzine KillingTheBuddha.com, he is now the editor of Search, The Magazine of Science, Religion, and Culture. He lives with his wife and two daughters in Washington, D.C., where he studies religion and teaches writing at Georgetown University.

"This is a strange and marvelous story, told with unerring grace. In the Manseau family, the call to religious service is like the call of the ancient Sirens. And yet they survive. Peter Manseau's writing is keen-eyed, lyrical, muscular, and more, and while Vows is a story about big ideas -- religion, devotion, sacrifice -- it is above all a love letter to his own family."

"[Vows] forms a history of how the priesthood evolved -- and how people navigate the boundaries between religious tradition and modern life. In the process, Manseau paints a picture of liberal -- and devoutly religious -- Catholics facing up to the church's authority."

"With the grace of a gifted storyteller and a son's love for his parents, Peter Manseau tells a story that's not been previously told....Vows...isn't sensational or hostile, but rather a revelatory and nuanced exploration of his parents and their relationship with the Catholic Church, which has both blessed them and wounded them."

"There are moments in Vows...when the prose is so achingly beautiful that the reader must stop for a moment.... If you've ever graced a pew or wondered about the people who do, Vows goes a long way toward explaining faith."

The Story of a Priest, a Nun, and Their Son