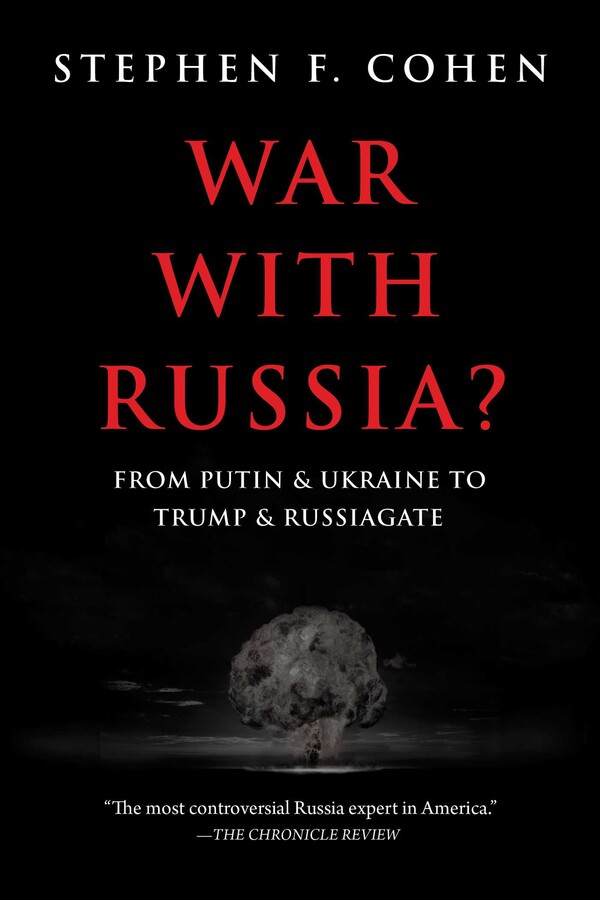 From Putin & Ukraine to Trump & Russiagate

Is America in a new Cold War with Russia? How does a new Cold War affect the safety and security of the United States? Does Vladimir Putin really want to destabilize the West? What should Donald Trump and America’s allies do?

America is in a new Cold War with Russia even more dangerous than the one the world barely survived in the twentieth century. The Soviet Union is gone, but the two nuclear superpowers are again locked in political and military confrontations, now from Ukraine to Syria. All of this is exacerbated by Washington’s war-like demonizing of the Kremlin leadership and by Russiagate’s unprecedented allegations. US mainstream media accounts are highly selective and seriously misleading. American “disinformation,” not only Russian, is a growing peril.

In War With Russia?, Stephen F. Cohen—the widely acclaimed historian of Soviet and post-Soviet Russia—gives readers a very different, dissenting narrative of this more dangerous new Cold War from its origins in the 1990s, the actual role of Vladimir Putin, and the 2014 Ukrainian crisis to Donald Trump’s election and today’s unprecedented Russiagate allegations. Topics include:

Cohen’s views have made him, it is said, “America’s most controversial Russia expert.” Some say this to denounce him, others to laud him as a bold, highly informed critic of US policies and the dangers they have helped to create.

War With Russia? gives readers a chance to decide for themselves who is right: are we living, as Cohen argues, in a time of unprecedented perils at home and abroad?

Praise for War With Russia?

“A fantastic new book, which you should read.” —Tucker Carlson

“Cohen sees himself as a balancer, getting readers to see the other side. He laments what he terms ‘Russophobia’ among much of the American political class as well as high-profile journalists and academics. … At times, Cohen is a provocateur, but if he compels us to sharpen our analysis by examining a contrarian position, this is not such a bad thing. He often brings to light questions that others have neglected. He is especially adept at taking sometimes unfocused or ideologically eccentric views emanating from Russia and turning them into succinct, declarative statements. This alone is helpful. In our current volatile climate, dissenting voices are necessary to the conversation.”—Military Review journal, review essay by Robert F. Baumann, PhD

“The title of Cohen’s book is intended not as a prophecy but a warning. In the overexcited debate about Putin and Trump, Cohen chooses to eschew moderation because he believes that in practice that results in conformity with an anti-Russia narrative that is not only wrong but dangerous. This book will delight his supporters and enrage his opponents, while readers of a moderate persuasion will be able to admire the passion and tenacity of his resistance to the trend towards provoking war with Russia.” —Irish Times, reviewed by Geoffrey Roberts, emeritus professor of history at University College Cork and a member of the Royal Irish Academy

Bukharin and The Bolshevik Revolution: A Political Biography
“This magnificent book will come to be regarded … as one of the two or three really outstanding studies in the history of the Soviet Union of the past 25 years.”—The New York Review of Books

Rethinking the Soviet Experience
“[Cohen] clarifies Russian issues better than anyone has in the past decade.”—Cleveland Plain Dealer

Failed Crusade: America and the Tragedy of Post-Communist Russia
“A blistering, brilliant, and deeply felt critique of America’s decade-long daydream of a Russia in transition.”—Kirkus Reviews

The Victims Return
“A striking memoir … Russians today are inheritors of an unspeakably immense crime, and Cohen engages fully — and personally — with the debate on the way they continue to grapple with their Stalinist legacy.”—The New Yorker

Soviet Fates and Lost Alternatives
“An extraordinarily rich book …an absolutely vital beginning point for anyone interested in a serious study of political and foreign policy developments involving Russia.”—Slavic Review

“Cohen’s ideas about Russia, which once got him invited to Camp David to advise a sitting president, now make him the most controversial expert in the field.”—The Chronicle Review

From Putin & Ukraine to Trump & Russiagate