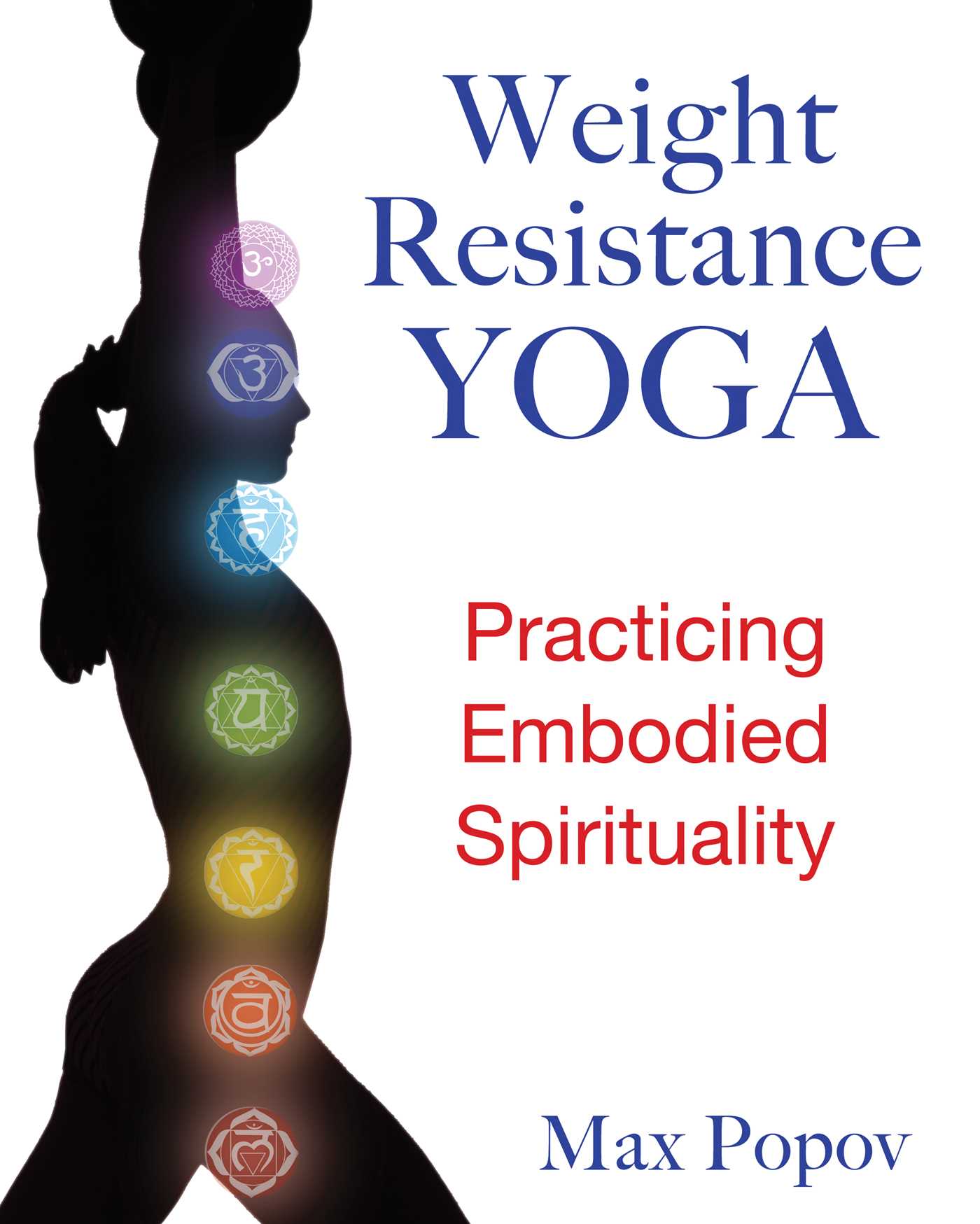 • Explains how to induce a calm, meditative state through the movements, breathing, and focus of strength-training exercises

• The perfect complement to a yoga flexibility practice

Applying the wisdom of hatha yoga to weight-lifting exercises, Weight-Resistance Yoga reveals how to transform a strength-training session into a mindful, calm, and meditative yoga practice. Through 26 fully illustrated weight-resistance exercises using machines, free weights, and the body itself--along with an emphasis on coordinated rhythmic breathing, stability, stillness, and full absorption in the body’s movements against resistance--fitness trainer Max Popov explains how to access the tranquility that dwells within each of us while safely, effectively, and efficiently strengthening your neck, shoulders, arms, torso, hips, knees, and ankles. To support the meditative state of this practice, the author includes 20 themed meditations on the embodied experience of the exercises.

The perfect complement to yoga flexibility practice, weight-resistance yoga allows you to fully inhabit your body, empty your mind of everyday preoccupations, and fill your soul with comprehensions of deeper realities, providing strength, calm, and spiritual illumination through your physical fitness work.

Our skeleton is simply incapable of generating movement or supporting itself against gravity without the actions of muscles. Muscles make joints mobile by moving bony levers about a joint axis and make joints stable by keeping joint surfaces close and resistant to extraneous movement.

Positioning into Stillness
1. Place one of the pulleys in the lowest position. Attach an ankle strap to the pulley, and wrap the strap’s cuff around the ankle of your moving leg. Grasp the bar with both hands.
2. As you step back with your supporting leg, tilt forward (with your back straight).
3. Fully bend your moving knee (position yourself far enough back so that you can bend it without hitting the machine).

1. Keeping your upper body motionless, bring your moving leg back while simultaneously straightening it and outwardly rotating it.
2. Return to the starting position.
3. After completing the set, repeat the action with your other leg.
Note: The hip can be extended with the aid of the hamstrings by keeping your knee straight.

Common Errors
- Pulling the leg back as far as possible (which strains the lumbar spine by creating excessive extension).

Corrections
- Bringing the leg back only slightly behind the trunk (to prevent the pelvis from tilting forward and the back from arching).

Common Errors
- Bending the trunk (to use momentum to kick the leg back).

- Twisting the trunk to the outside (to cheat on the leg rotation).

Corrections
- Maintaining a straight back (while the body itself is tilted).

- Keeping the trunk facing forward (while outwardly rotating the leg).

On Standing Up
Bent-Leg Hip Extension and Hanging Leg Raise

Bring a leg back. This movement--hip extension--is performed by the large gluteal muscles, which make up the buttocks. Feel your buttocks. Although layered over with fat, the gluteus maximus, which forms most of the muscle of the buttocks, is easily palpable. That’s because it originates on the posterior spine and pelvis and inserts on the upper leg. Bring the leg forward and up. This movement--hip flexion--is primarily performed by the iliopsoas, which lifts the leg beyond the normal standing position. Moving obliquely from the small of the back through the pelvic bowl to attach at the front upper leg, the iliopsoas, although large, is not easily palpable.

These two dissimilar and opposing muscles, the gluteus maximus and iliopsoas, work together sequentially, sometimes in an alternating rhythm, to perform a variety of motions that require strong anterior/posterior action of the hips. Although they aren’t strongly contracted during ordinary walking, the gluteal muscles and iliopsoas are strongly brought into play in another common daily activity: standing up from sitting.

In general, we prefer sitting to standing. The act of sitting down, especially as we get older, is a pleasurable activity. It sometimes produces a sigh of relief. We’re equipped for sitting. Compared to ape buttocks, human buttocks are quite large. Apes sit on their ischial tuberosities (sitz bones), which protrude through their fur; we’re cushioned by prominent rounded buttocks.

But, sooner or later, stand up we must. In fact, rising to a standing position from a sitting position is one of the most critical activities of daily life. If we think about the mechanics of rising at all, it’s probably because our ability (or the ability of someone close to us) to stand has been impaired or even lost. During the weight-resistance yoga session, when we reflect on what it means to be human, we consider how standing up is a critical aspect not only of our daily life and the evolutionary development of our species but also the biological development of the individual. In first standing up without support, the child has no concern for security. Failure--falling down--doesn’t discourage the child one bit. The forceful urge to get up, to resist downward-pulling forces, overcomes any fear. “In getting up,” observes phenomenological psychologist Irwin W. Straus, “a child gains his standing in the world. The parents are not the only ones who greet the child’s progress with joy. The child enjoys no less the triumph of his achievement.”

Likewise, when we perform weight-resistance yoga we know that it’s through our own self-discipline that our life is transformed and that it’s only we, in part through our reverent and upright posture, who can open ourselves up to the ground of Being.

Max Popov is a fitness trainer and scholar of modern yoga. He developed weight-resistance yoga in the late 1980s by applying the teachings of B. K. S. Iyengar to the strength-training teachings of famed 1920s Indian bodybuilder K. V. Iyer. He lives in New York City.

“Very impressive and necessary. I’m excited by this unique blend of Western-style strength training combined with the flexibility and meditative side of yoga. Popov’s book is for all of us. It offers functional movement along with serentiy and mindfulness.”

“Melding hatha yoga and weight training into a blended practice, Max Popov shows us how these disciplines are not only completely compatible but also how each brilliantly supports the other’s path of inquiry. By combining both, we go far beyond the individual benefits of stretching or strength and enter directly into the domain of a powerfully embodied spirituality.”

– Will Johnson, author of Yoga of the Mahamudra

“Bringing the yogic principle of mindfulness into all aspects of our lives is one of the ultimate goals of yoga. I recommend this book for anyone wishing to bring more spiritual depth to any physical exercise program.”

“...the information provided is very valuable and explained thoroughly...this book is a treasure waiting to be discovered.”

“Popov is a good writer and I like his exercise methods. He did an outstanding job with the weight resistance training sections of the book.”

“In Weight-Resistance Yoga, author Max Popov blends weight training and yoga practice in a conscious manner. His attention to paying attention assures not only a well-sculpted form but also a finely honed mind.”

“This more meditative form of weight lifting seeks self-liberation through the mindful movements of the joints against resistance.”