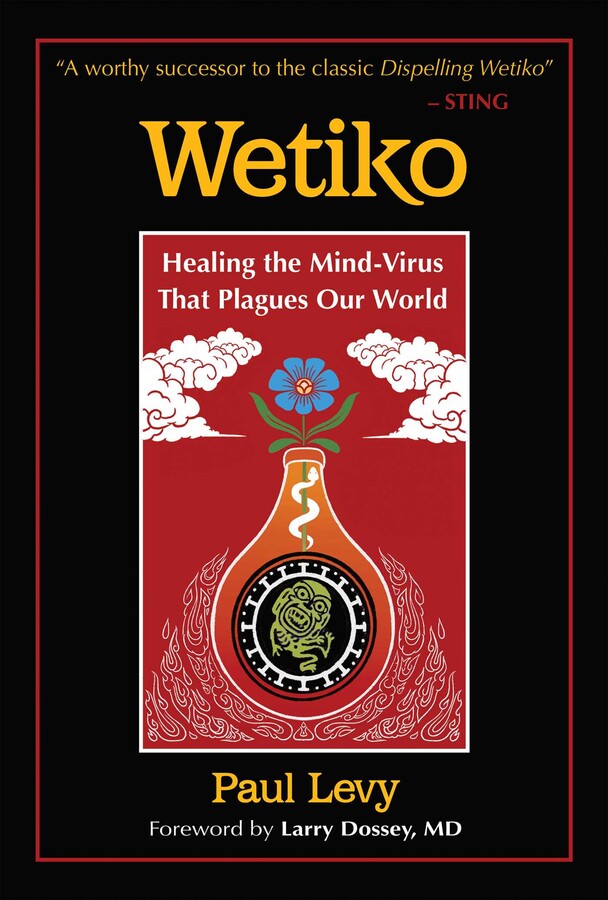 Healing the Mind-Virus That Plagues Our World

• Explores how wetiko covertly operates both out in the world and within our minds and how it underlies every form of self-destruction, both individual and collective

• Examines the concept of wetiko as it appears in the teachings of the Kabbalah, Hawaiian Kahuna shamanism, mystical Christianity, and the work of C. G. Jung

In its Native American meaning, wetiko is an evil cannibalistic spirit that can take over people’s minds, leading to selfishness, insatiable greed, and consumption as an end in itself, destructively turning our intrinsic creative genius against our own humanity. Revealing the presence of wetiko in our modern world behind every form of destruction our species is carrying out, both individual and collective, Paul Levy shows how this mind-virus is so embedded in our psyches that it is almost undetectable--and it is our blindness to it that gives wetiko its power. Yet, as Levy reveals in striking detail, by recognizing this highly contagious mind parasite, by seeing wetiko, we can break free from its hold and realize the vast creative powers of the human mind.

Levy explores how artists, philosophers, and spiritual traditions across the ages have been creatively symbolizing this deadly pathogen of the psyche so as to help us see it and heal it. He examines the concept of wetiko as it appears in the teachings of the Kabbalah, Hawaiian Kahuna shamanism, Buddhism, and mystical Christianity and through esoteric concepts like egregores, demons, counterfeiting spirits, and psychic vampires. He reveals how visionary thinkers such as C. G. Jung, Sri Aurobindo, Philip K. Dick, Colin Wilson, Nicolas Berdyaev, and Rene Girard each point to wetiko in their own unique and creative way. He explores how the projection of the shadow self--scapegoating--is the underlying psychological mechanism fueling wetiko and examines wetiko in the context of the Covid-19 pandemic, showing that we can reframe the pandemic so as to receive the lessons and opportunities embedded in it.

Revealing how the power of imagination can cure the wetiko mind-virus, Levy underscores how important it is for each of us to bring forth the creative spirit within us, which helps shed the light of consciousness on wetiko, taking away its power over us while simultaneously empowering ourselves.

I imagine that one thing that everyone--on any side of the aisle--can agree on is that there is a genuine form of madness that is being acted out in our world. The origin of madness, we should remind ourselves, is to be found within the human psyche. In essence, the seemingly crazy and far out thing that I am saying is that the source, as well as the solution, of the seemingly endless crises in our world are to be found nowhere other than within the psyche.1 Upon close inspection, this is a no-brainer, it could not be more obvious - how could it be otherwise? What distinguishes our age from all others is that modern-day humanity can no longer deny the overwhelming might of the psyche. Our culture is being forced to acknowledge the force and power of the psychic undercurrents that inform events in our world. The roots of human behavior are not located in the material world but are to be found within the psyche.

Because of the human psyche’s ability to inform and give shape to world events, Jung calls it “the World Power that vastly exceeds all other powers on earth.”2 The greatest danger to humanity comes from our own psyche, which unfortunately is the part of the empirical world we know the least about. The myriad catastrophes that threaten our world today are psychic events, which is to say that these events have their source nowhere other than within the human psyche. The psyche is overlooked or neglected entirely as a source or causal agent in our planetary crisis, as we search for myriad external causes and solutions to the multiple crises we ourselves are collectively bringing about. These crises issue forth from the one place we, as a species, are most disinclined to look - within ourselves. The unconscious is the author of the unwritten history of humanity from time immemorial.

The nightmare that is unfolding in the world today is the emergence of the chaotic world of the unconscious that lies hidden under the ordered and seemingly coherent world of consciousness. Jung felt that “the great problem of our time” is that, to put it simply, we don’t understand what is actually happening in our world, which is that we are confronted with the darkness of our soul, with the darker forces of the unconscious, with evil. In writing about wetiko--and its psychic origins--I am simply trying to shed light on our little understood darker half that is, more than ever, insisting on being recognized. Evil has become a visible and undeniable Great Power striding across the world stage. If wetiko goes unrecognized, we deliver ourselves more and more into its hands, just as a typhus epidemic flourishes best when its source is undiscovered.

As compared to the Christian revelation, where a light shone from the heavens above, in our time a divine revelation is emerging from below. The powers of the underworld have been unleashed. The powers of darkness are coming up, and we need to come to terms with what they are revealing - or suffer the consequences. Contrary to solely being a sign of increasing moral degeneracy or decay, the revelation of darkness is a necessary and critically important part of the next stage of humanity’s collective psycho-spiritual evolution.

The unconscious is erupting into our world, bursting through the dyke of consciousness. Reason, as is evidenced all around us, has little traction in times like these. The powers of the underworld hide themselves behind our reason and highly sophisticated intellect. Our rationalism has disoriented us to the point of putting us at the mercy of the psychic underworld.

It is an archetypal idea that a divine spirit was imprisoned in matter, and it was humanity’s divinely sanctioned role to somehow free this spirit. The savior doesn’t come down from the celestial heavens, but rather, it arises from below, from the depths, from the unconscious. The savior doesn’t come solely from the light, but through the darkness as well. Great discoveries invariably come from the depths, just as trees never grow from the sky downward, but from the earth upward. No tree, it is said, can grow to heaven unless its roots reach down to hell.

With wetiko, we are dealing with a higher dimensional, nonphysical phenomenon that informs and gives shape to our world. This situation reminds me of what the founding fathers of quantum physics encountered when they discovered the quantum realm. They described the situation as if they had come across an unfamiliar, never-before-seen animal that they had confined for inspection within an animal house. They likened their situation to walking around this house and peering in the different windows, trying to combine their fragmentary views so as to assemble a more complete view of what in fact they were dealing with.

The situation with wetiko is similar - it is as if a higher dimensional object is casting a shadow into the third-dimension of space and time and the trans-dimensional hologram of our minds. By putting together these shadow reflections we can begin to conceive of and construct the “out-of-this-world” object that is their source. There is no one definitive model that fully delineates the elusive workings of wetiko disease, but when all of these unique articulations are seen together, a deeper picture begins to get in focus that can help us to see it.

Wetiko can be likened to the darkness (which in this example can symbolize the ignorance that is characteristic of wetiko) in a room in which there is no sunlight. As long as there is no light, this darkness seems like a real “thing.” And yet, once we open the blinds and sunlight (symbolic of awakening) pours into the room, the darkness is in that same moment evicted and exists no longer, as if it never existed in the first place. After the light has emerged, we can contemplate the darkness from the point of view of it being nothing other than the absence of light. And yet, before the coming of the light, the darkness had real effects, meeting every criteria for being real in and of itself (I think of Jung’s idea that in the realm of psyche something is “real” if it “works,” i.e., has real effects). This is the paradox: as compared to existing intrinsically, from its own side--by virtue of something--wetiko only exists by the “lack of virtue” of not realizing our own nature.

Wetiko is nonlocal,3 in that it is an inner disease of the soul that discloses itself through the canvas of the outside world. This mind-virus has the seemingly magical ability to extend itself out into the world and configure outer events to give itself living material form. Not constrained by the conventional laws of third-dimensional space and time, wetiko nonlocally in-forms events in the world as well as our reactions to them so as to synchronistically express--and reveal--itself.

Just like in a dream, events in the outer world are symbolically reflecting back to us a condition deep within the psyche of each one of us--recognizing this correlation helps us begin to develop the vision to see wetiko. If we don’t understand that our current world crisis has its roots within and is an expression of the human psyche, we are doomed to unconsciously repeat and continually re-create endless suffering and destruction in more and more amplified form, as if we are having a recurring nightmare.

Paul Levy is a pioneer in the field of spiritual emergence and a Tibetan Buddhist practitioner for more than 35 years. He is the founder of the Awakening in the Dream Community in Portland, Oregon, and the author of several books, including Dispelling Wetiko. He lives in Portland, Oregon.

Healing the Mind-Virus That Plagues Our World