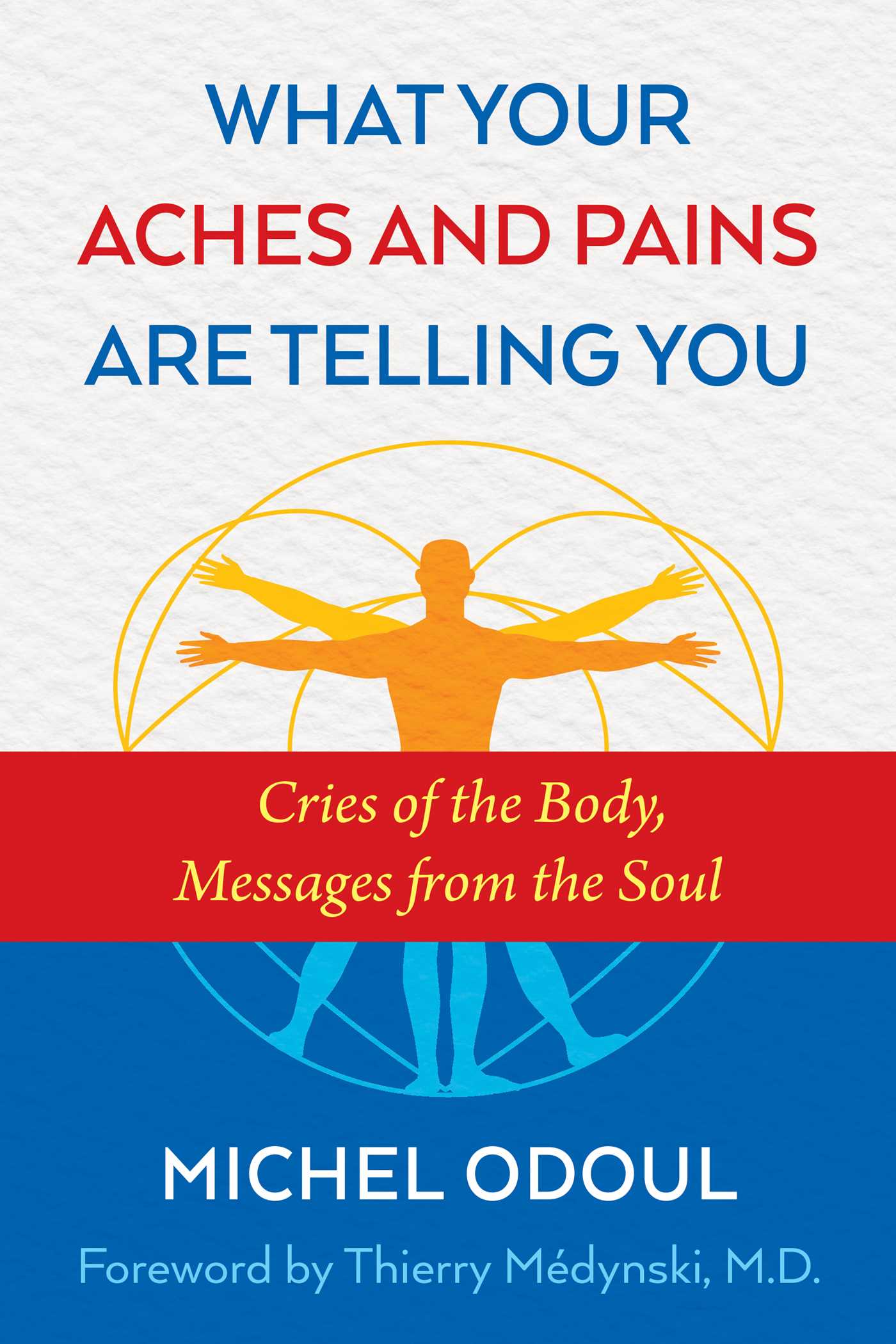 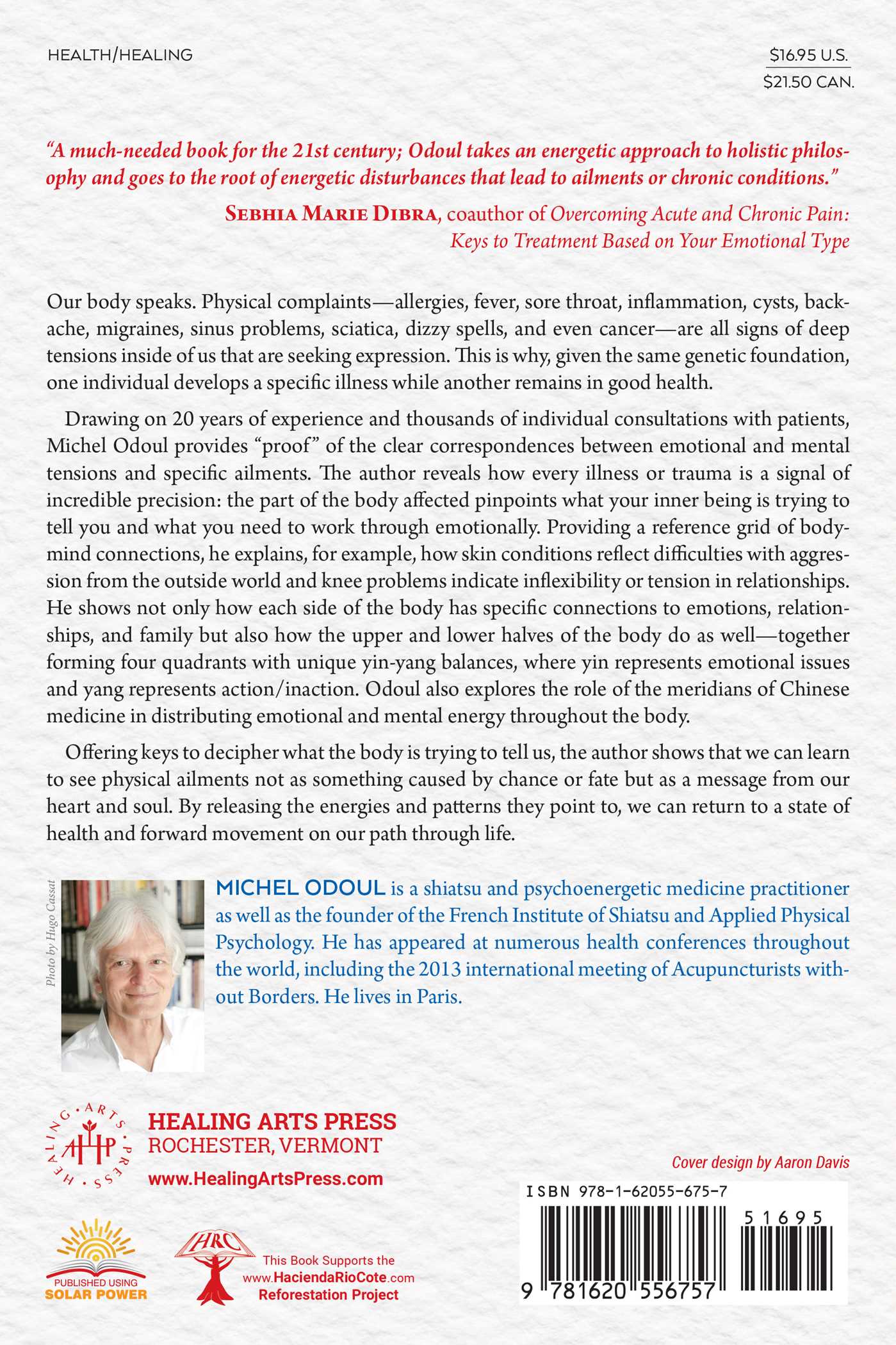 What Your Aches and Pains Are Telling You

Cries of the Body, Messages from the Soul

Our body speaks. Physical complaints--allergies, fever, sore throat, inflammation, cysts, backache, migraines, sinus problems, sciatica, dizzy spells, and even cancer--are all signs of deep tensions inside of us are seeking expression. This is why, given the same genetic foundation, one individual develops a specific illness while another remains in good health.

Drawing on 20 years of experience and several thousand individual consultations with patients, Michel Odoul shows the “proof” of this lies in the clear correspondences between emotional and mental tensions and specific ailments. The author reveals how every illness or trauma is a signal of incredible precision: The part of the body affected pinpoints what your inner being is trying to tell you and what you need to work through emotionally. Providing a reference grid of body-mind connections, he explains, for example, how skin conditions reflect difficulties with aggression from the outside world and knee problems indicate inflexibility or tension in relationships. He shows not only how each side of the body has specific meanings and connections to emotions, relationships, and family but also how the upper and lower halves of the body have specific connections--together forming four quadrants with unique Yin-Yang balances, where Yin represents emotional issues and Yang represents action/inaction. He also explores the role of the meridians of Chinese medicine in distributing emotional and mental energy throughout the body.

Offering keys to decipher what the body is trying to tell us, the author shows that we can learn to see physical ailments not as something caused by chance or fate but as a message from our heart and soul. By releasing the energies and patterns they point to, we can return to a state of health and forward movement on our path through life.

How is the body put together? And what is the role of each of the parts and organs that compose it and support its existence and functioning?

First of all, it is constructed around a frame, a solid, hard structure: the skeleton. This skeleton, made of bones, is rigid but jointed in order to support all bodily movement. It is itself structured around a basic axis that is the spinal column. Here we have our “magic trunk” from which spread out all the “branches” of our body.

Inside this load-bearing structure, we have the various organs, which are placed perfectly so that their functions operate under the best possible conditions. The whole is set in motion by a 4 very extensive system of motors (muscles) and cables (tendons, ligaments) and is protected with an envelope that completely encloses it (the skin).

We are now going to take each part of our body and study it in detail. This is how we will find, for each part, the secret codes that will allow us to decipher its messages.

The Lower Limbs The lower limbs are composed of two parts, the upper leg (thigh and femur) and the lower leg (calf, tibia, and fibula), and three important axes which are their main joints. They end in a masterful piece--the foot.

The joints that connect and articulate the foot, the lower leg, the upper leg, and the torso are the hip, the knee, and the ankle. What is the primary physiological role of our legs? They are what allow us to move about, to go forward or back, from one place to another, and, of course, toward others. Therefore, they are our mobility agents that put us into relationship with the world and with other people. The “societal” symbolism of the leg is very strong. It’s the leg that makes possible gatherings, meetings, contacts, and movement forward. Our legs then are our agents of relationship.

In a very general sense, when we have tension or pain in the legs, it means that we have tension in our relationships with the world or with someone. We are having difficulty moving forward or backward in the relational space of the moment. The more precisely we can pinpoint the location within the leg, the more we will be able to refine the type of tension we are experiencing and the more likely we will understand it.

The hip corresponds to the primary, basic, “mother” joint of the lower limbs. It is from the hip that all potential movement of these limbs begins. It also represents the basic axis of our world of relationships. We term it the “doorway of the relational unconscious” (see fig. 4.2), the point through which the elements of our unconscious emerge toward the conscious. Our deepest plans, our beliefs about relating to others and to the world, and the way in which we experience our relationships are somatically represented by the hip. Any disturbance--conscious or not--in these areas will have repercussions at the site of one of our hips.

Problems with the hip--pain, tension, blockages, arthroses--show us that we are moving through a situation where the basis of our deepest beliefs is being brought into question. When the hip lets go it means that our deep inner supports, our most deeply rooted beliefs connecting us to life are letting go as well. Issues of betrayal or abandonment come to the surface, whether our own or someone else’s.

If it’s a matter of the left hip, we have the case of an experience of treason or abandonment with yang (paternal) symbolism. I’m thinking here of a person called Sylvie who had come to see me about a problem of arthrosis in her left hip just before having it operated on. After letting her speak about her physical suffering, I led her to the heart of the problem. Having her talk a little more about her life I asked, “What man betrayed you or let you down in the last few months?” In spite of her surprise, she confided in me that she had lost her husband three years before, but she didn’t see any connection between these two things. I gradually explained to her the unconscious process that had taken all that time to be released in this way. She then recognized that indeed she had experienced the disappearance of her husband as an abandonment and as something that was unfair. After two sessions of harmonization massage and work on this memory, her hip was released to the point that during the second week she was able to go two complete days without feeling the slightest pain. Her fears and her professional obligations impelled her, nevertheless, to make the decision to undergo the operation, which was a “complete success” and silenced the pain.

But a year and a half later she came back to see me for the same problem, this time in the right hip. It was clear that she had released none of the previous internal tension. The wound in the soul had not healed and it sought another point in the body where it could express itself. I pushed her further then to speak about her experience and finally she confessed that after the disappearance of her husband she had had serious doubts about his fidelity and thought that he had cheated on her. She felt betrayed in her position as his wife. It was not surprising then that the unconscious needed to send this unresolved wound, which was kept open by doubt, into a hip. If it’s the right hip that’s involved, we have the case of an experience of betrayal or abandonment of yin (maternal) symbolism. This time her pain went to the right hip because her femininity was at stake, but it also went there because the left hip could no longer “speak.”

Michel Odoul is a shiatsu and psychoenergetic medicine practitioner as well as the founder of the French Institute of Shiatsu and Applied Physical Psychology. He has appeared at numerous health conferences through the world, including the 2013 international meeting of Acupuncturists without Borders. He lives in Paris.

“A much-needed book for the 21st century; Odoul takes an energetic approach to holistic philosophy and goes to the root of energetic disturbances that lead to ailments or chronic conditions. Odoul connects us to the profound unconscious components of our minds and bodies to reconstruct physical ailments and thus develop transparency throughout our physical and our spiritual lives.”

“In What Your Aches and Pains Are Telling You, Odoul demonstrates how pain tells your mind what is happening in your body, not only where, but why. He shows the reader how understanding your pain can provide pathways to healing.”

What Your Aches and Pains Are Telling You

Cries of the Body, Messages from the Soul