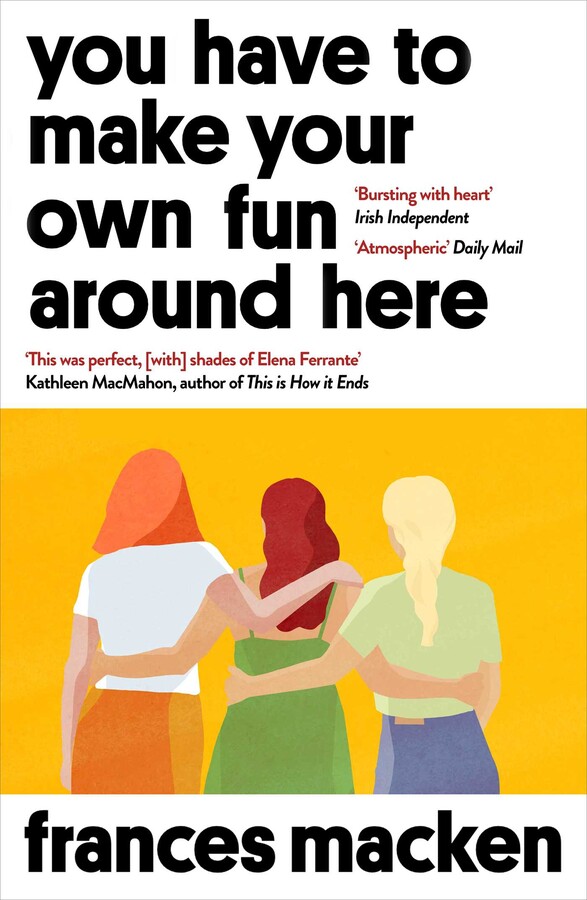 You Have to Make Your Own Fun Around Here

Katie, Maeve and Evelyn – friends forever, united by their childhood games and their dreams of escaping the tiny Irish town of Glenbruff.

Outspoken, unpredictable and intoxicating, Evelyn is the undisputed leader of the trio. That is, until the beautiful, bold Pamela Cooney arrives from Dublin and changes Glenbruff forever...

Told from Katie's witty, quirky perspective, Frances Macken's debut beautifully captures life in a small town and the power of yearning for something bigger. Filled with unforgettable characters and crackling dialogue, You Have to Make Your Own Fun Around Here takes a keen-eyed look at the complexities of female friendship, the corrosive power of jealousy and guilt, and the way that life can quietly erode our dreams unless we're willing to fight for them.

'A fresh, clever look at the intricacies and jealousies of female friendship. This debut reads like a modern, mysterious version of Edna O’Brien’s The Country Girls.'

'Few writers have articulated the intricacies of friendship – the dependency, the uncertainty, the fragility of the pecking order – with as much authority….a debut bursting with heart.'

‘You Have to Make Your Own Fun Around Here vividly captures life in a close-knit community, while examining the intricacies and anxieties of female friendship… Katie is a vibrant creation, whose insights are often fresh and startling… The ups-and-downs of going places is ultimately what makes the narrative come to life.’

'This exploration of the seething hinterland of growing up, with its often unspoken passions, unrequited longings and intense jealousies, is melancholy, funny, dark and affecting.'

– Deborah Kay Davies, author of Reasons She Goes to the Woods

'A subtle, powerful debut novel. Quietly packing her emotional punches, never predictable, Macken’s prose is clear-eyed yet lyrical, and in Katie, she has created a truly touching (and at times very funny) protagonist... A new voice in fiction to celebrate.'

'Frances Macken's You Have To Make Your Own Fun Around Here charts the friendship of three small-town girls from their childhoods through to their early careers, exploring envy and self-belief with consistent, natural humour and spot-on observations.'

'It's funny, dark and brilliant on toxic friendships. I highly recommend.'

You Have to Make Your Own Fun Around Here