Star Trek: The Next Generation (TNG) focuses on the twenty-fourth century adventures of Captain Jean-Luc Picard aboard the USS Enterprise (NCC-1701-D). This incarnation of the famous starship is much larger than the one captained by James T. Kirk a century earlier, and, accordingly, it carries a larger crew complement: 1,012 men, women…and, surprisingly, children. This era’s Starfleet Command believes that men and women are more likely to sign up for long-term exploratory missions if they think of their ship as home. Thus, Picard’s crew enjoys many of the comforts they’d have otherwise left behind, including a wide variety of recreational opportunities, “replicated” food dishes to suit every palate, and quarters large enough to share with spouses and offspring. There are schools for the children and a bar (stocked with synthetic alcohol, or synthehol) where the adults can unwind. However, the ongoing mission—no longer limited to a mere five years—remains virtually the same as it was during Kirk’s time: to seek out new life and new civilizations, and to boldly go where no one has gone before. 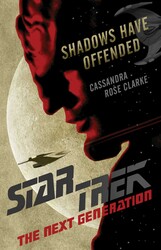 Shadows Have Offended
By Cassandra Rose Clarke
An original novel based on the acclaimed Star Trek TV series!

The USS Enterprise has been granted the simple but unavoidable honor of ferrying key guests to Betazed for a cultural ceremony. En route, sudden tragedy strikes a Federation science station on the isolated...