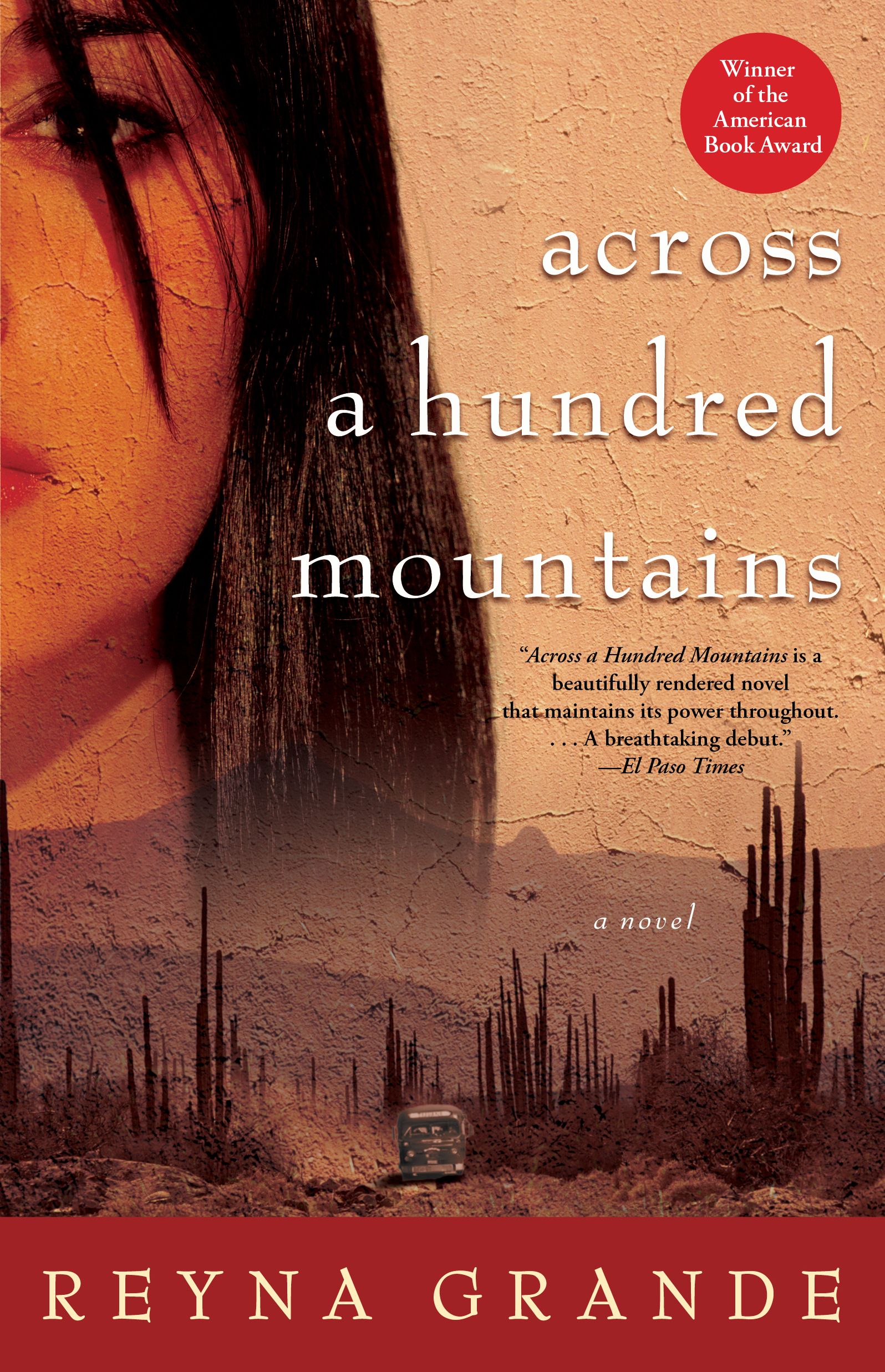 Across a Hundred Mountains

Winner of the American Book Award, Across a Hundred Mountains is a “timely and riveting” (People) novel about a young girl who leaves her small town in Mexico to find her father, who left his family to work in America—a story of migration, loss, and discovery.

After a tragedy separates her from her mother, Juana García leaves in search of her father, who left them two years earlier. Out of money and in need of someone to help her across the border, Juana meets Adelina Vasquez, a young woman who left her family in California to follow her lover to Mexico. Finding themselves—in a Tijuana jail—in desperate circumstances, they offer each other much needed material and spiritual support and ultimately become linked forever in the most unexpected of ways.

In Across a Hundred Mountains, Reyna Grande puts a human face on the controversial issue of immigration, helping readers to better understand “the desperation of illegal immigrants and the families they leave behind” (Entertainment Weekly) in pursuit of a better life.

By clicking 'Sign me up' I acknowledge that I have read and agree to the privacy policy and terms of use.
SUMMARY
After years of taking care of her mother, Juana Garcia leaves her small town in Mexico to find her father who disappeared nineteen years earlier. Out of money and in need of someone to help her cross the border, Juana meets Adelina Vasquez, who left her family in California three years prior to follow forbidden love in Mexico.
After the two women join forces in the most unlikely locale -- a Tijuana city jail -- nothing is ever quite what it seems. In a vivid novel depicting dreams deferred and dreams fulfilled, Grande takes readers inside the lives of Mexicans who are left behind in the phenomenon of migration to the United States.

READING GROUP DISCUSSION
1. Early in the book, we learn that Juana is enslaved to feelings of guilt and obligation: "Her father's ashes. Her redemption. Perhaps after she delivered the ashes to her dying mother there would be no more demons to haunt her, and she would be able to lower her head on a pillow and sleep" (page 12). What event initially inspires Juana's remorse? How does that event shape the character she ultimately becomes? Besides the search for her father, in what other ways does Juana attempt to redeem herself?
2. As the story flips between plotlines, the conclusion of one chapter is often very similar to the introduction of the next, at least in terms of what each character is doing. Find as many examples as you can throughout the book where the transition between Adelina and Juana involves the two characters taking part in the same activity. What effect does this technique have on the story as a whole?
3. The author uses vivid imagery throughout the novel to bring the experiences of Juana and Adelina to the reader. What imagery was the most striking? What other techniques does the author employ to involve the reader in the setting and events?
4. When Adelina sleeps in the park after first arriving in Los Angeles, the man who directs her towards Don Ernesto offers an interesting theory about the moon: "'It has two faces. She only shows one face to the world. Even though it changes shape constantly, it's always the same face we see. But her second face, her second face remains hidden in darkness. That's the face no one can see. People call it the dark side of the moon. Two identities. Two sides of a coin...'" (page 25). Does Adelina identify with the moon? What ultimate revelation does this statement serve to foreshadow?
5. At what point in the novel do you begin to consider the possibility that the two characters, Adelina and Juana, are in fact the same person? What does the author accomplish in constructing the novel in this way? Does the narrative style of each identity differ in any way?
6. Lupe, Juana's mother, believes the saints punish her for succumbing to Don Elias and sleeping with him in order to pay off her debt. Even when she takes part in the Semana Santa ceremony as a flagelante, she receives no salvation and never gets her son back. Lupe's life plummets after this final failed attempt for redemption, but is her faith itself altered?
7. In spite of all the suffering Juana watches her mother go through, she eventually repeats her mother's actions -- surrendering perhaps even more than Lupe did -- when she becomes a prostitute. Is Juana's desire to find her father worthy of such a sacrifice?
8. Prayers made to saints often go unanswered in the novel. "Juana remembered the times of long ago when the saints and La Virgen de Guadalupe had been there for them. But now, all the statues were covered with dust, and the flower petals had long ago shriveled" (page 130). Does Juana's (Adelina's) faith change throughout the course of the novel? What does she rely upon to keep her hope alive?
9. Don Ernesto becomes somewhat of a father figure to Adelina, yet she breaks her final promise to him when she denies herself the "chance to be happy with" Sebastian (page 158). What motivates her to make this choice? Although the reader never learns if Adelina returns to Sebastian, do you think the author implies in the conclusion that Adelina is in fact ready to follow through on her promise to Don Ernesto?
10. Duality is a predominant theme in this book. Besides Juana, are there any other characters that develop different identities? What characters resemble one another, especially in terms of what they mean to Juana/Adelina?
11. The story opens and closes with "Adelina" chapters. Do you think this was a conscious decision the author made? If so, what is the significance of this choice?
12. The main characters in Across a Hundred Mountains are women, several of whom are victims of male brutality or abandonment. What effect do these characterizations have upon the overall message of the novel?

ENHANCE YOUR BOOKCLUB
1. Set the mood with food! However sparse her meal, what Juana eats is often described in great detail throughout Across a Hundred Mountains. Before your book club meeting, look online for recipes (this site has many Mexican meal suggestions: http://www.mexgrocer.com/) for the authentic Mexican dishes and foods that the characters eat, such as quesadillas. Assign different dishes to members in your book club and bring the food to your meeting.
2. Juana ultimately assumes Adelina's identity. Before your book group meets to discuss Across a Hundred Mountains, have fun playing with this theme. Draw names to swap "identities" with another member in your club, and come dressed up as that member for your meeting. Everyone in the group can take turns guessing who each person has become!
3. Author Reyna Grande has a comprehensive website: http://www.reynagrande.com/ Before your meeting, read about Reyna and discover what her favorite books are. Read selections from a few of those books and discuss whether they served as literary influences. 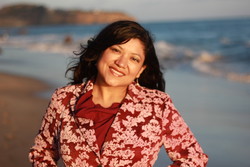 Reyna Grande is an award-winning author, motivational speaker, and writing teacher. As a girl, she crossed the US–México border to join her family in Los Angeles, a harrowing journey chronicled in The Distance Between Us, a National Book Critics Circle Award finalist. Her other books include the novels Across a Hundred Mountains and Dancing with Butterflies, and the memoirs The Distance Between Us: Young Reader’s Edition and A Dream Called Home. She lives in Woodland, California, with her husband and two children. Visit ReynaGrande.com for more information.

"Across a Hundred Mountains is a beautifully rendered novel that maintains its power throughout....A breathtaking debut."

"Grande's heartfelt [novel] addresses a worthy subject -- the desperation of illegal immigrants and the families they leave behind."

"Reyna Grande beguiles with the spare, unadorned prose of a fabulist, then stuns with emotional truths of shattering complexity....A tale full of memorable characters and even more memorable truths."

"Grande's deft portraiture endows even the smallest characters with grace."

Across a Hundred Mountains