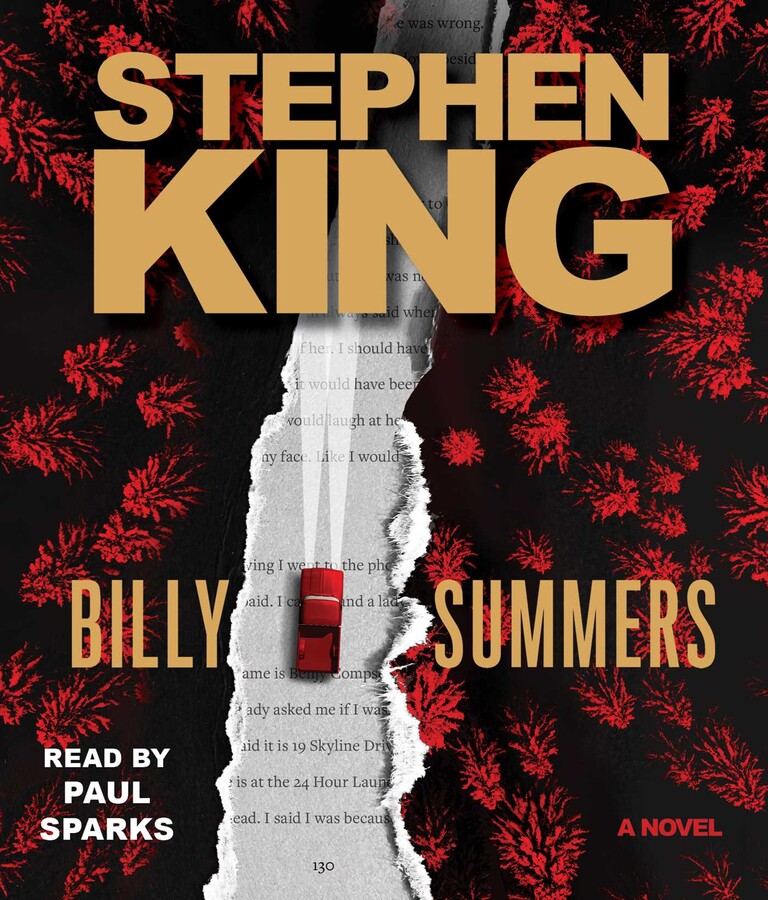 From legendary storyteller Stephen King, whose “restless imagination is a power that cannot be contained” (The New York Times Book Review), comes a thrilling new novel about a good guy in a bad job.

Billy Summers is a man in a room with a gun. He’s a killer for hire and the best in the business. But he’ll do the job only if the target is a truly bad guy. And now Billy wants out. But first there is one last hit. Billy is among the best snipers in the world, a decorated Iraq war vet, a Houdini when it comes to vanishing after the job is done. So what could possibly go wrong?

This spectacular can’t-put-it-down novel is part war story, part love letter to small town America and the people who live there, and it features one of the most compelling and surprising duos in King fiction, who set out to avenge the crimes of an extraordinarily evil man. It’s about love, luck, fate, and a complex hero with one last shot at redemption.

You won’t put this story down, and you won’t forget Billy.

By clicking 'Sign me up' I acknowledge that I have read and agree to the privacy policy and terms of use.
This reading group guide for BILLY SUMMERS includes an introduction, discussion questions, and ideas for enhancing your book club. The suggested questions are intended to help your reading group find new and interesting angles and topics for your discussion. We hope that these ideas will enrich your conversation and increase your enjoyment of the book.

Billy Summers is a top-tier assassin with a heart of gold. When the job turns out to be a setup, Billy must switch gears and rewrite his plans entirely. While he’s laying low, he suddenly gains a completely unexpected and unlikely companion who opens his heart and who becomes his future partner in vengeance. The two forge ahead together, trying to put their darkest chapters behind them and ultimately find some sort of redemption.

1. When interacting with others, Billy takes the precaution of projecting his “dumb self,” comparing it to a seatbelt. What do you think of this method of protecting oneself? Have you, or anyone you know, done anything similar?

2. In Chapter 5, Billy plays Monopoly with his David Lockridge neighbors, the Ackermans. During the game, he explains Hobson’s Choice, which means having to “decide between taking a chance or standing pat.” In what ways does this choice manifest throughout the book?

3. As Billy continues to write the story of Benjy Compson, in reality his story, he suddenly realizes that “he wants to be read” and that “any writer who goes public with his work is courting danger. It’s part of the allure. Look at me. I’m showing you what I am. My clothes are off. I’m exposing myself.” Despite being adept at hiding his true identity, it seems he wants to be known. Discuss why Billy specifically feels this way and why writers in general may crave this type of acknowledgment.

4. As an assassin, Billy maintains several undercover identities and social lives to hide in plain sight. How might these skills translate to writing skills? What else about Billy’s background makes him a surprisingly good writer, despite his lack of experience?

5. In Chapter 6, Billy has a conversation with Colin White where Colin shows how he changes to his aggressive lawyer persona, which confuses Billy as to whether he is “a good person or a bad one.” What do you make of Billy’s tendency to think in black and white? How might he be different if he allowed for gray areas? How might the story be different?

6. As Dalton Smith, Billy gets to know Beverly and Don Jensen, the couple who lives in the apartment upstairs. After Beverly’s mother passes away and leaves them two hundred thousand dollars, they exit the active story, going on vacation long-term, which helps out Billy but also makes him think about what his pay is really worth. What did this subplot add to the story overall? How does it impact Billy?

7. Chapter 10 is when the assassination of Joel Allen takes place. Discuss your experience reading through this chapter. How did you feel while reading? Was there anything that alerted you that something might be off? Discuss how King handles the suspenseful moments and deeply engages you.

8. Billy is known among his colleagues for asking if his targets are “bad men.” Later on, he has the following exchange with Alice:

“If [Tripp] was hurt that would make me happy. I suppose that makes me a bad person.”

“It makes you human,” Billy says. “Bad people need to pay a price. And the price should be high.”

What is your opinion on Billy’s moral code? How do you feel about the way he took revenge on Alice’s rapists? Was he justified, or do his actions also make him a bad man?

10. Clay Briggs, Billy’s military buddy, teaches Billy two methods of calming panic attacks during their time in Fallujah, which Billy passes on to Alice: placing a wet washcloth over your face and singing “The Teddy Bears’ Picnic” lyrics. Would you try these methods yourself? What do you think of the way mental health and psychological healing are dealt with in this story?

11. Bucky Hanson is mostly in the background throughout the story until Billy and Alice drive out to meet him toward the end of the novel. Billy calls him the only person he trusts completely. What is your impression of Bucky? How does King effectively make him come across as a trustworthy person. Did you ever distrust him?

12. When Billy and Alice go to confront Roger Klerke, the big bad guy of the story, Alice shoots and kills him instead of Billy. What does it mean to you that Alice is the one to take vengeance? What does this mean for the story overall?

13. Think about Billy’s final words to Alice and how he sets her up mentally and financially to begin a new life. What was your reaction to his speech? What do you think about Billy and Alice’s relationship? What kind of love did they share?

14. In the final pages of the book, Alice says, “Did you know that you could sit in front of a screen or a pad of paper and change the world? It doesn’t last, the world always comes back, but before it does, it’s awesome. It’s everything.” What do you think of this concept? Of the power of writing and storytelling? What is it worth?

1. Try to write your own story. Consider writing about yourself, or rewriting something in your life you wished had gone differently. Then, be brave and share with someone what you’ve written. How did this process feel for you? Does it help you better understand Billy, or writers in general?

2. Figure out a way to practically visualize the distance of Billy’s first shot as a sniper. A football field is about a hundred yards. The first shot that Billy ever made was over thirteen times that length. Consider getting a rangefinder, or just a pair of binoculars, and find a point in the distance that might approximate that distance. Alternatively, try walking a hundred yards thirteen times. (You do not need to complete this walk if you become tired)!

3. Listen to the full “The Teddy Bears’ Picnic” song and sing along. Why do you think King chose these as the soothing lyrics Billy learns from Clay Briggs?

Stephen King is the author of more than sixty books, all of them worldwide bestsellers. His recent work includes Fairy Tale, Billy Summers, If It Bleeds, The Institute, Elevation, The Outsider, Sleeping Beauties (cowritten with his son Owen King), and the Bill Hodges trilogy: End of Watch, Finders Keepers, and Mr. Mercedes (an Edgar Award winner for Best Novel and a television series streaming on Peacock). His novel 11/22/63 was named a top ten book of 2011 by The New York Times Book Review and won the Los Angeles Times Book Prize for Mystery/Thriller. His epic works The Dark Tower, It, Pet Sematary, and Doctor Sleep are the basis for major motion pictures, with It now the highest-grossing horror film of all time. He is the recipient of the 2020 Audio Publishers Association Lifetime Achievement Award, the 2018 PEN America Literary Service Award, the 2014 National Medal of Arts, and the 2003 National Book Foundation Medal for Distinguished Contribution to American Letters. He lives in Bangor, Maine, with his wife, novelist Tabitha King.

"Narrator Paul Sparks's performance is so perfect it challenges the listener to stop listening. Sure—just TRY to turn it off! Sparks is fantastic, whether he's giving voice to a fat Mafioso called Pig or a young rape victim who turns to Billy for help or the other colorful characters from King's work. While Billy's character is a tad far-fetched, it fits the definition of antihero—think Showtime's Dexter. And because the story is told in the first person, listeners see the decent person inside the man with blood on his hands."

SEE ALL
See more by Stephen King
Thank you for signing up, fellow book lover!