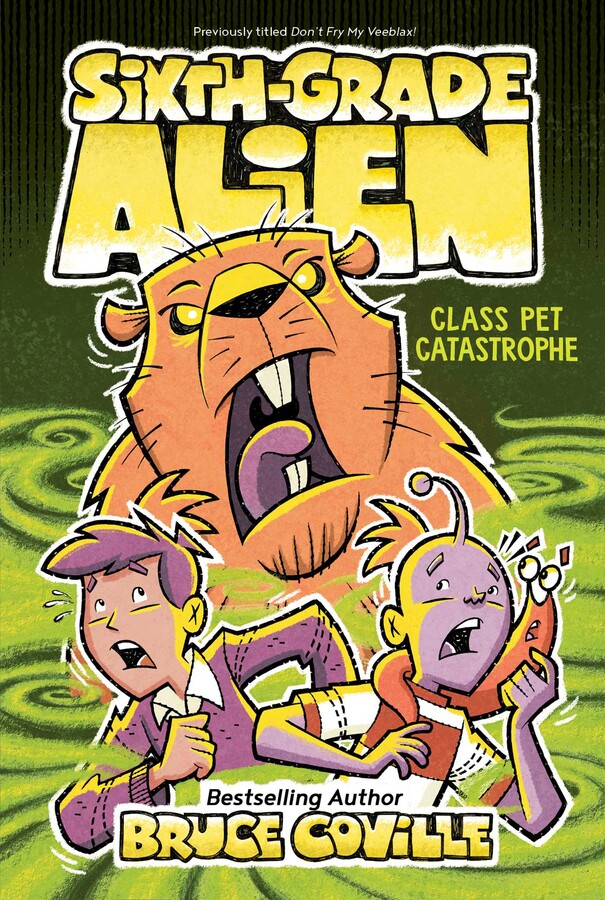 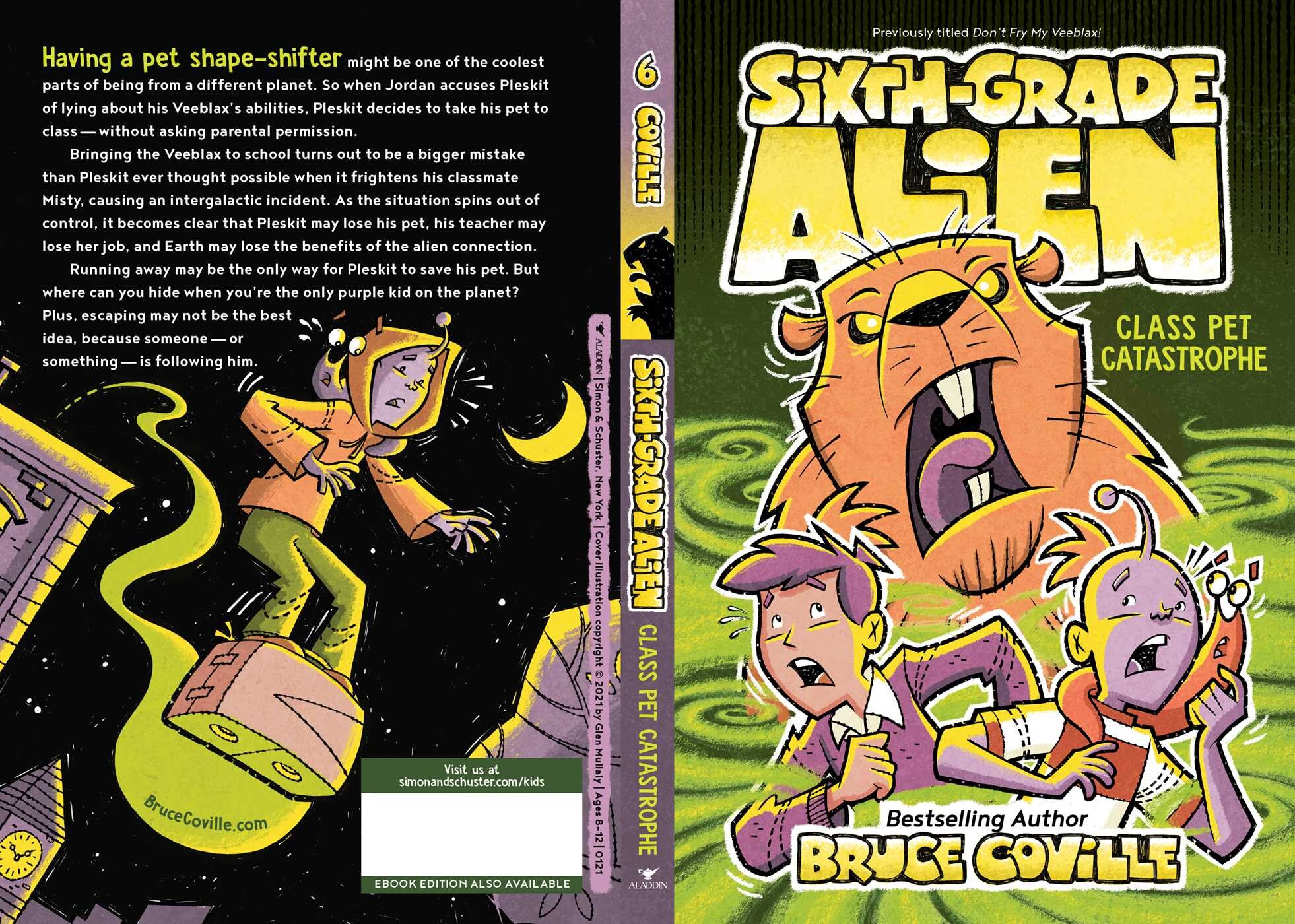 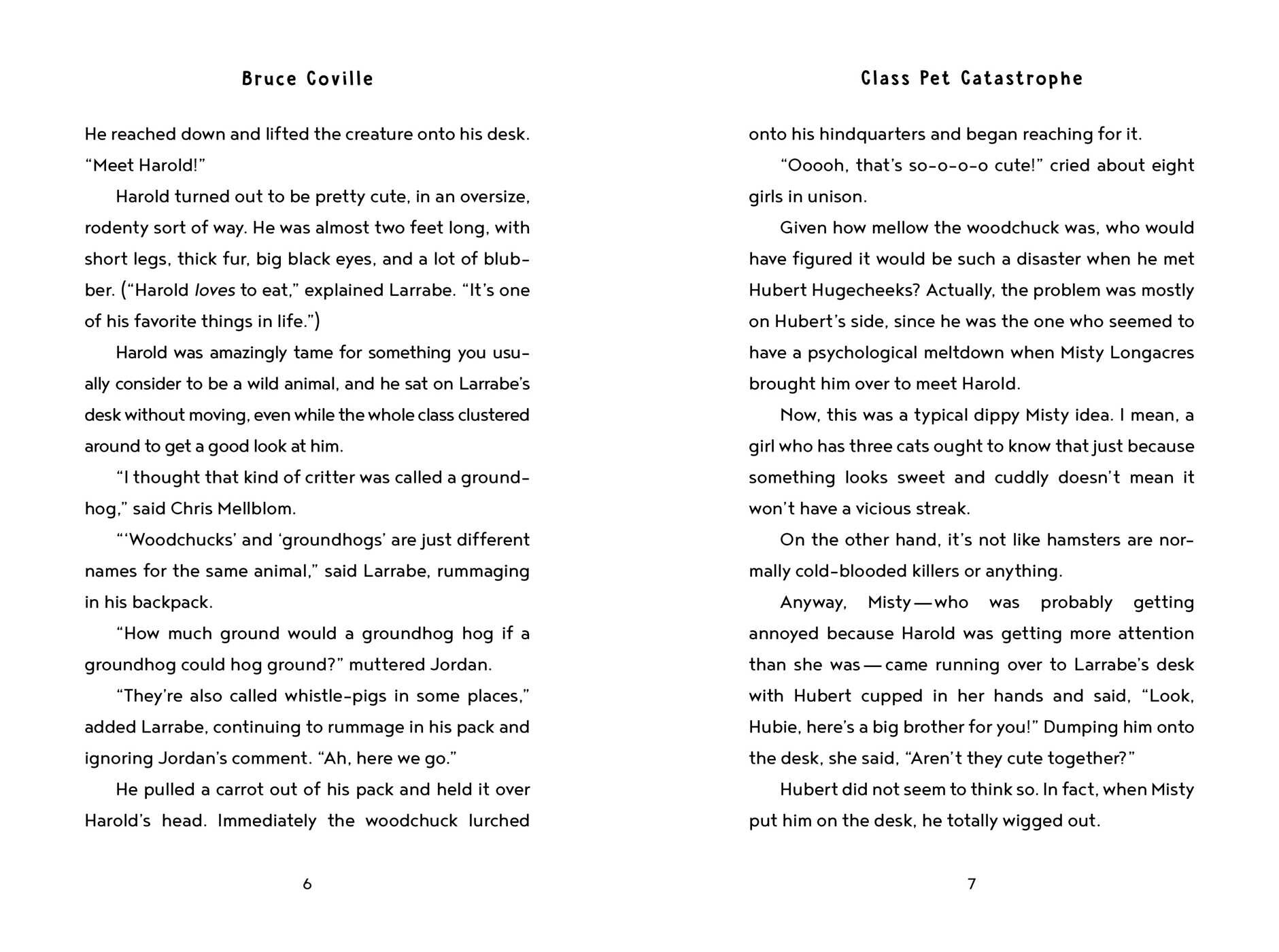 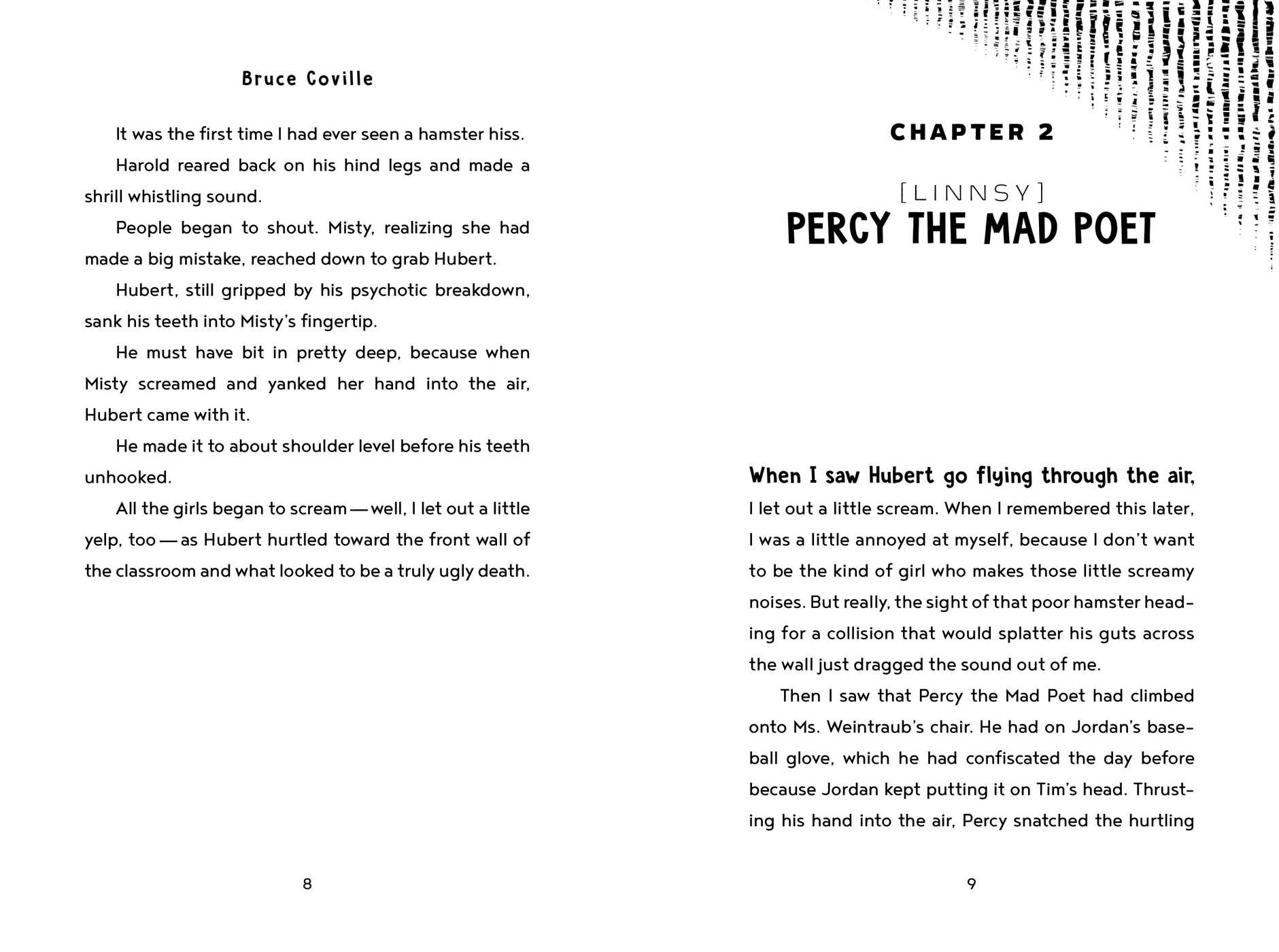 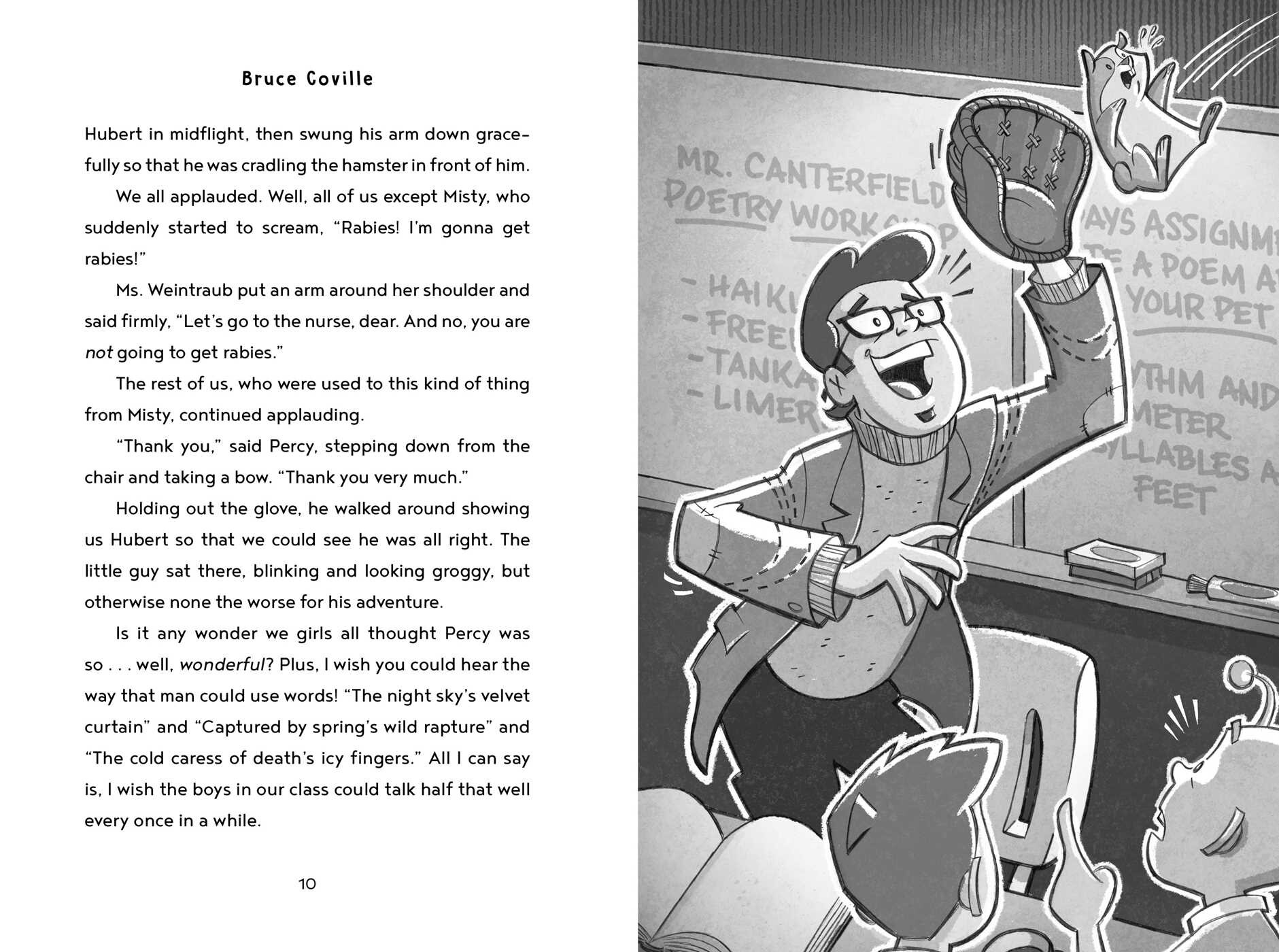 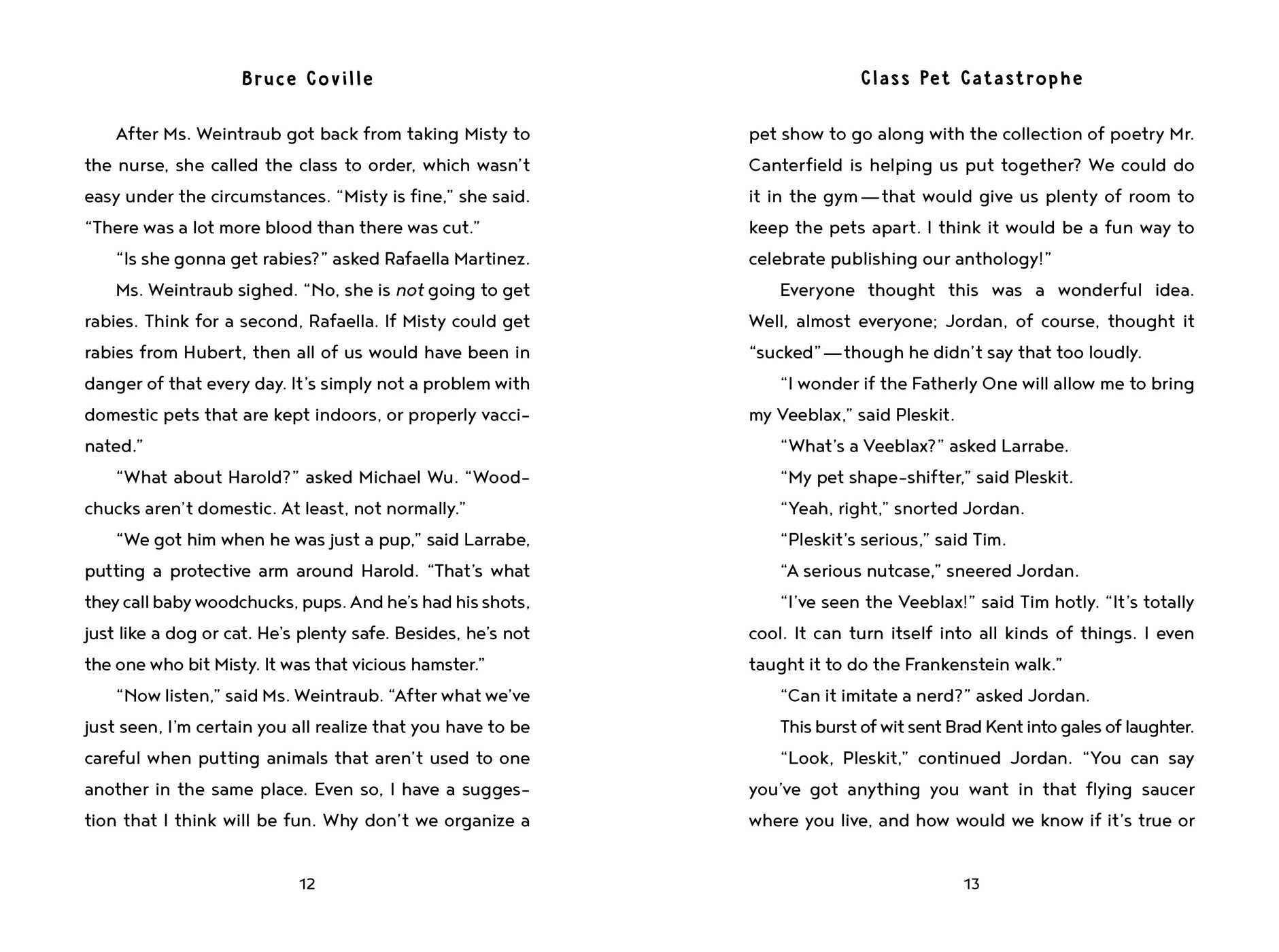 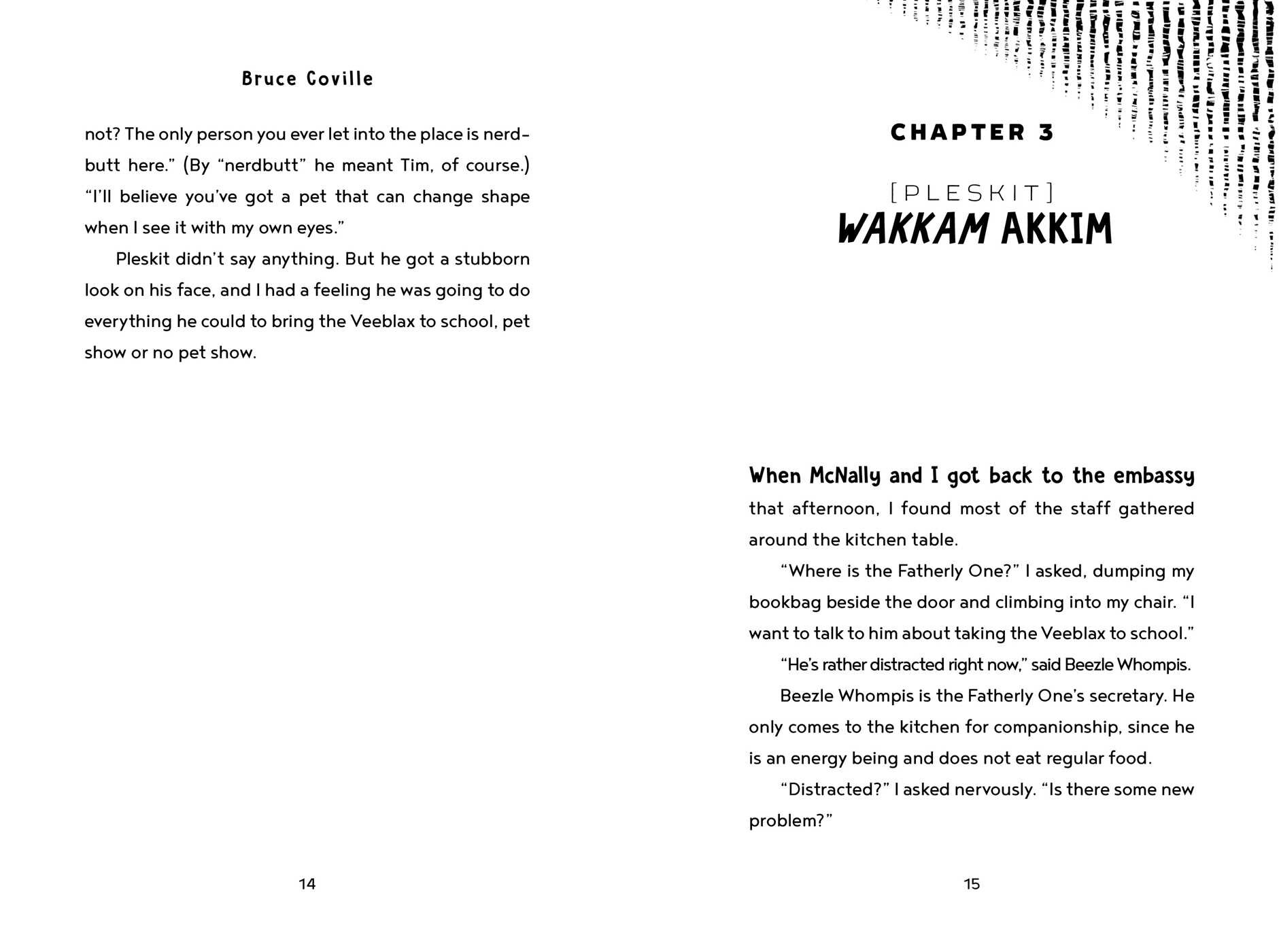 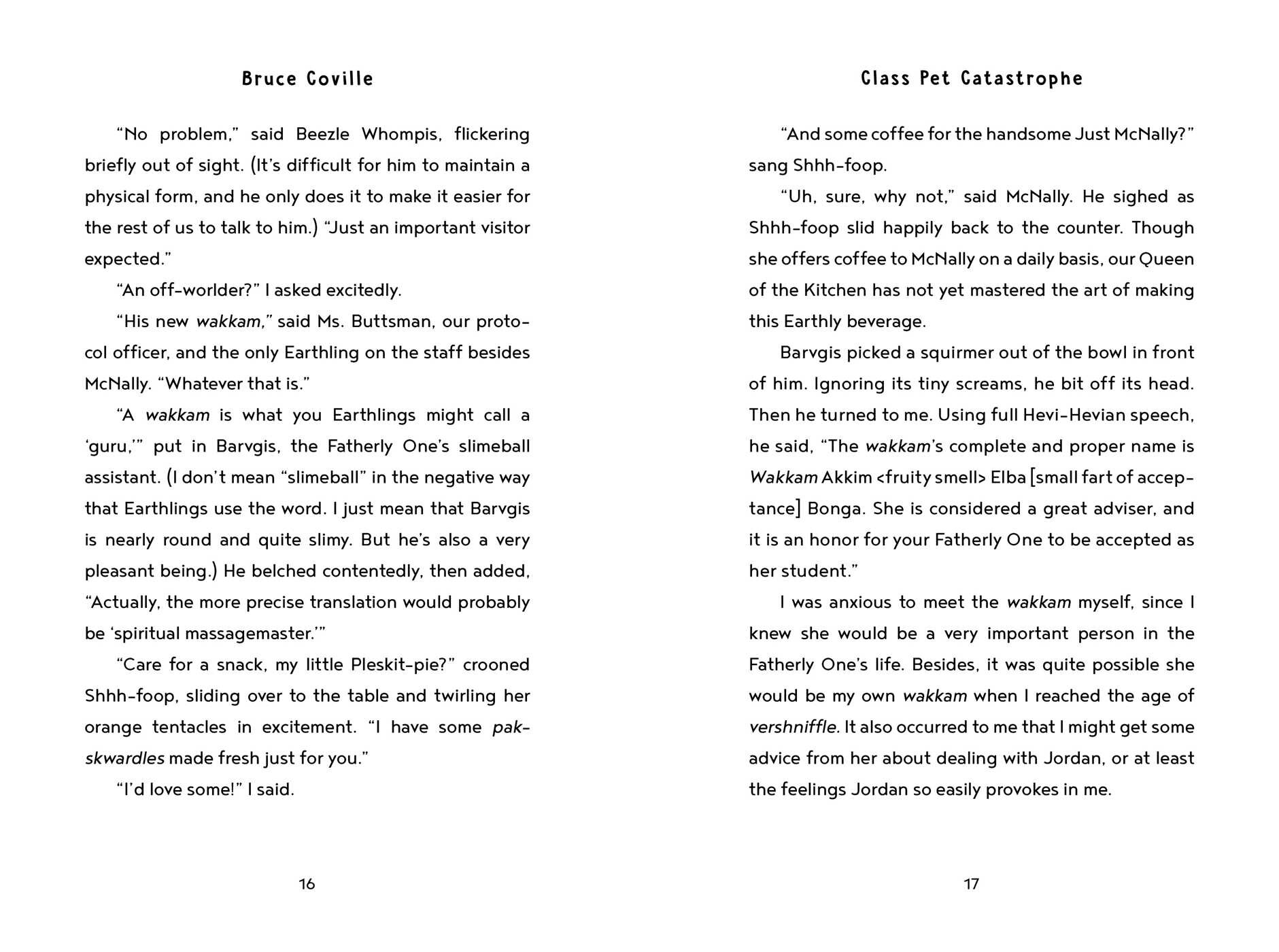 Pleskit’s alien pet causes widespread panic in this sixth book in the hilarious, fast-paced, and accessible sci-fi series Sixth-Grade Alien from the bestselling author of Aliens Ate My Homework and My Teacher Is an Alien, Bruce Coville.

Having a pet shapeshifter might be one of the coolest parts of being from a different planet. So when Jordan accuses Pleskit of lying about his Veeblax’s abilities, Pleskit decides take his pet to class—without asking parental permission.

Bringing the Veeblax to school turns out to be a bigger mistake than Pleskit ever thought possible when it frightens his classmate Misty, causing an intergalactic incident. As the situation spins out of control, it becomes clear that Pleskit may lose his pet, his teacher may lose her job, and Earth may lose the benefits of the alien connection.

Running away may be the only way for Pleskit to save the his pet. But where can you hide when you’re the only purple kid on the planet? Plus, escaping may not be the best idea, because someone—or something—is following him.

CHAPTER 1 [Tim] THE FLYING HAMSTER
The whole mess with Pleskit’s Veeblax got started because of Percy the Mad Poet.

Pleskit, of course, is the son of the ambassador from the planet Hevi-Hevi, and the first alien kid to go to school on Earth. Or maybe not; though Pleskit is the first alien kid that everyone knows about, from what he tells me, there may have been others here in secret. Anyway, he’s the only purple kid I ever met, and the only kid in our school who comes to class with a bodyguard.

And Percy? His full name is Percy Mortimer Canterfield, and he’s this poet who comes to our school every year to do a writing workshop with us. Why the school has to bring in someone special to teach us about writing, I’m not sure, since our teachers have us write all year anyway. But Percy has published a couple of books, and as far as I can tell, all he ever thinks about is writing, so I suppose he has some useful tips. Besides, he’s pretty cool. So I don’t mind when he visits. In fact, I kind of like it. He makes poetry more interesting than you would have thought possible.

When Jordan Lynch got put in our class two years ago and heard that a poet named Percy was coming to teach us writing for a week, the first words out of his mouth were, “Great. Five days with some skinny sissy spouting off about flowers and bunnies and crap like that.”

So it was pretty amusing to see Jordan’s face when Percy actually showed up. “Sissy” is not a word you could safely use about this guy. He’s tall, about six feet, and definitely looks like he works out on a regular basis. He reminds me a little of Captain Lance Driscoll from Tarbox Moon Warriors, except that his nose is slightly bent from where it was broken in a fight.

Linnsy Vanderhof, my upstairs neighbor and former best friend (until she outgrew me), says she likes Percy’s broken nose because it keeps him from being a pretty boy. This brings up the only thing I don’t like about having Percy visit, namely that some of the girls get all goopy over him—including Linnsy, who really ought to know better.

Anyway, when Percy came this year, he decided we should write poems about pets—which meant that first we had to have a discussion about our pets. I sighed. Pets are a topic I personally find quite distressing, mostly because I don’t have one.

“That’s all right,” said Percy when I pointed this out to him. “You can write about one of the class pets instead.”

He was referring to our hamsters. We have three of the little beasts: Ronald Roundbutt, Doris the Delightful, and Hubert Hugecheeks. Hubert got his name the day we all watched in horrified fascination as he crammed so much food into his cheeks that we thought his head might explode. You should have seen him! Anyway, I like the hamsters, but I don’t have what you would call a close personal relationship with any of them.

“I bet I’ve got the most unusual pet in the class,” said Larrabe Hicks proudly.

I doubted this was true; it was far more likely that Pleskit’s pet Veeblax was more unusual, since it was the only one on the planet. Even so, I was interested to hear what Larrabe had.

Larrabe beamed. “I have a woodchuck. His name is Harold.”

“A woodchuck?” cried Jordan. “That’s the craziest thing I ever heard!” He would have said more, but he got laughing so hard that Brad Kent—who could be Jordan’s personal pet, since he seems to look at Jordan the way most dogs look at their masters—had to pound him on the back to stop him from choking.

“Sounds pretty cool to me,” said Percy. “Any chance you could bring him in?”

This was a typical Percy thing to do. He was always suggesting something that made our teachers groan and roll their eyes. Only Ms. Weintraub didn’t, because she is very cool, definitely the coolest teacher we’ve ever had. She actually agreed that if it was okay with Larrabe’s mother, Harold could spend the week with us.

The next morning I got to school a little early, something that doesn’t happen all that often. Pleskit and I were talking about plans for the weekend (even though it was only Tuesday). His bodyguard, McNally, who is sort of my hero, was standing a few feet away.

(My mother doesn’t like me to call adults by their last names, since she thinks it’s rude, but that’s what McNally prefers. “The name’s McNally—just McNally” is the way he introduces himself. This has led Shhh-foop, the embassy cook, to believe that his proper name is “Just McNally.”)

As Pleskit and I talked, McNally’s eyes were roving the classroom, checking everything out. At least, that’s my theory. I have no idea what his eyes were really doing, since I’ve never seen them. McNally always wears dark sunglasses, even inside.

Suddenly he began to smile. “Well, I’ll be danged,” he muttered.

I turned toward where he was looking.

Larrabe had just come through the door. He was holding a leash. At the other end of the leash, strapped into a leather harness, was a woodchuck!

Larrabe’s mom walked in behind him, carrying a big metal cage.

“Told you I had a woodchuck,” said Larrabe happily. He reached down and lifted the creature onto his desk. “Meet Harold!”

Harold turned out to be pretty cute, in an oversize, rodenty sort of way. He was almost two feet long, with short legs, thick fur, big black eyes, and a lot of blubber. (“Harold loves to eat,” explained Larrabe. “It’s one of his favorite things in life.”)

Harold was amazingly tame for something you usually consider to be a wild animal, and he sat on Larrabe’s desk without moving, even while the whole class clustered around to get a good look at him.

“I thought that kind of critter was called a groundhog,” said Chris Mellblom.

“?‘Woodchucks’ and ‘groundhogs’ are just different names for the same animal,” said Larrabe, rummaging in his backpack.

“How much ground would a groundhog hog if a groundhog could hog ground?” muttered Jordan.

“They’re also called whistle-pigs in some places,” added Larrabe, continuing to rummage in his pack and ignoring Jordan’s comment. “Ah, here we go.”

He pulled a carrot out of his pack and held it over Harold’s head. Immediately the woodchuck lurched onto his hindquarters and began reaching for it.

Given how mellow the woodchuck was, who would have figured it would be such a disaster when he met Hubert Hugecheeks? Actually, the problem was mostly on Hubert’s side, since he was the one who seemed to have a psychological meltdown when Misty Longacres brought him over to meet Harold.

Now, this was a typical dippy Misty idea. I mean, a girl who has three cats ought to know that just because something looks sweet and cuddly doesn’t mean it won’t have a vicious streak.

On the other hand, it’s not like hamsters are normally cold-blooded killers or anything.

Anyway, Misty—who was probably getting annoyed because Harold was getting more attention than she was—came running over to Larrabe’s desk with Hubert cupped in her hands and said, “Look, Hubie, here’s a big brother for you!” Dumping him onto the desk, she said, “Aren’t they cute together?”

Hubert did not seem to think so. In fact, when Misty put him on the desk, he totally wigged out.

It was the first time I had ever seen a hamster hiss.

Harold reared back on his hind legs and made a shrill whistling sound.

People began to shout. Misty, realizing she had made a big mistake, reached down to grab Hubert.

Hubert, still gripped by his psychotic breakdown, sank his teeth into Misty’s fingertip.

He must have bit in pretty deep, because when Misty screamed and yanked her hand into the air, Hubert came with it.

He made it to about shoulder level before his teeth unhooked.

All the girls began to scream—well, I let out a little yelp, too—as Hubert hurtled toward the front wall of the classroom and what looked to be a truly ugly death.

Award-winning illustrator Glen Mullaly’s retro-styled illustrations and comics-inspired fun can be found in bestselling author Bruce Coville’s Sixth Grade Alien middle grade series, puzzle and paper-craft work for McDonald’s, publications for Dark Horse Comics, and his own line of fun greeting cards through Northwest Greetings. Glen also worked with Eisner and Inkpot Award–winning comic book artist Ken Steacy on Star Wars children’s books. Glen lives on the west coast of North America with his book-loving wife and their spiral-tailed cat who loves to help Glen with his work by leaving paw prints all over his illustrations whenever she can. Learn more at GlenMulally.com.