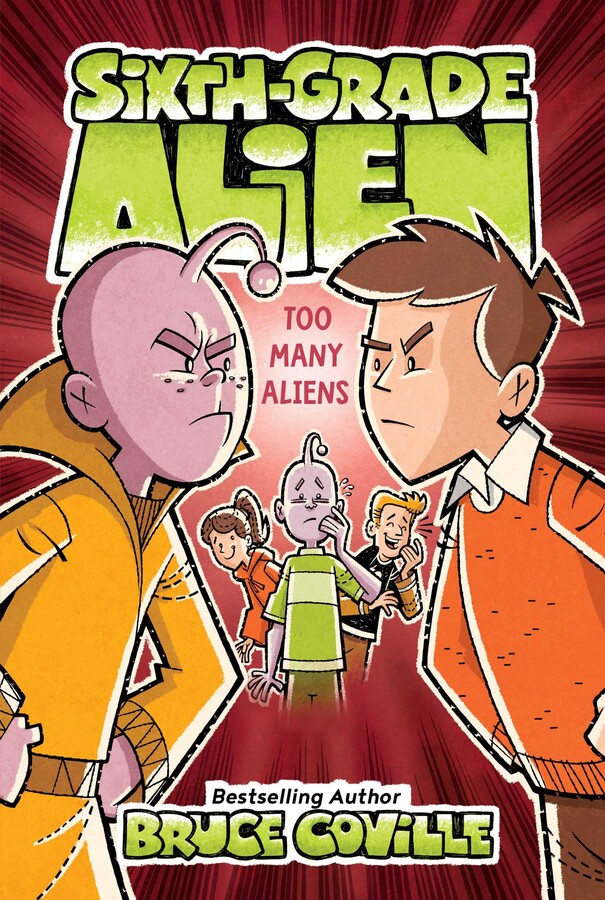 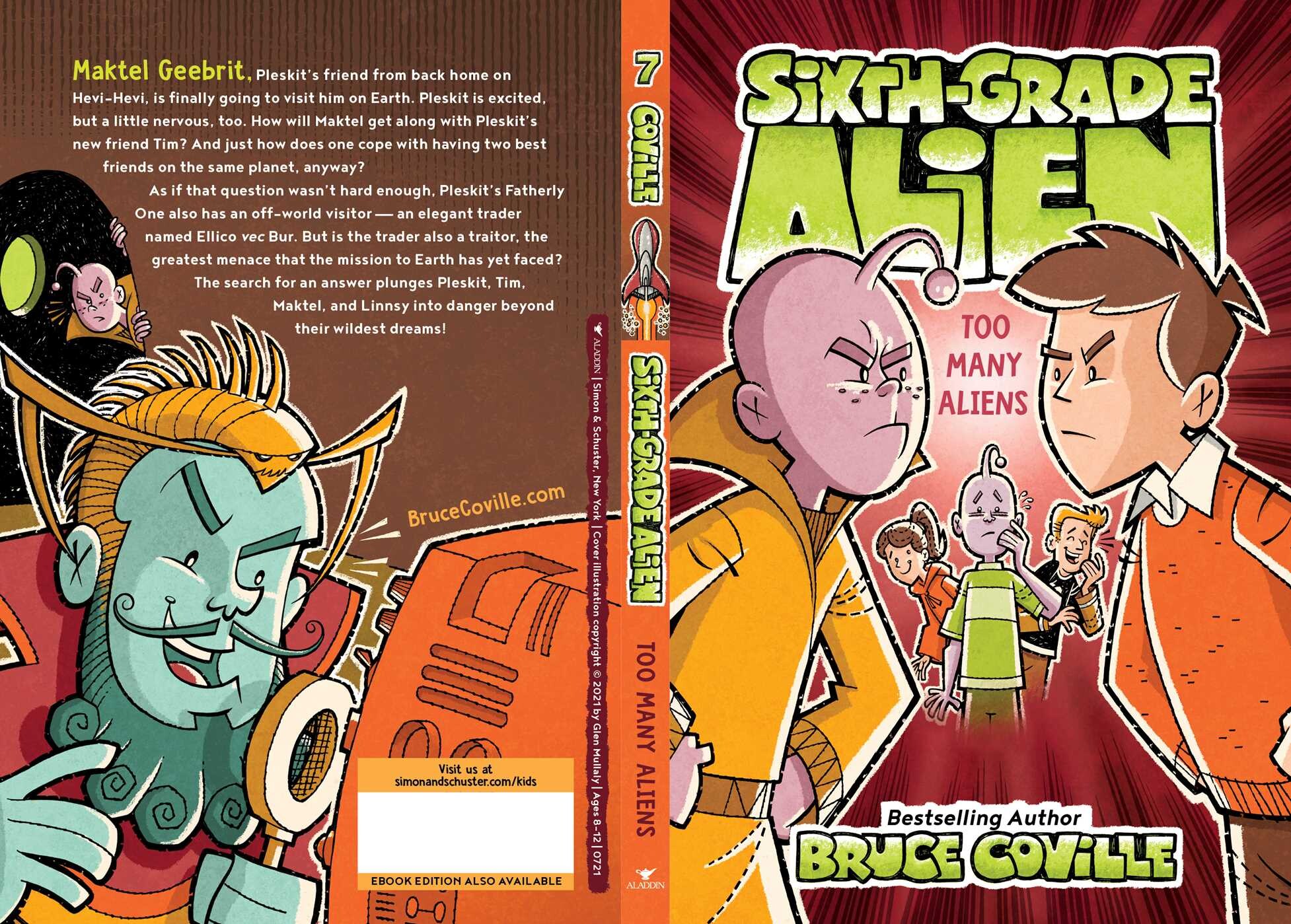 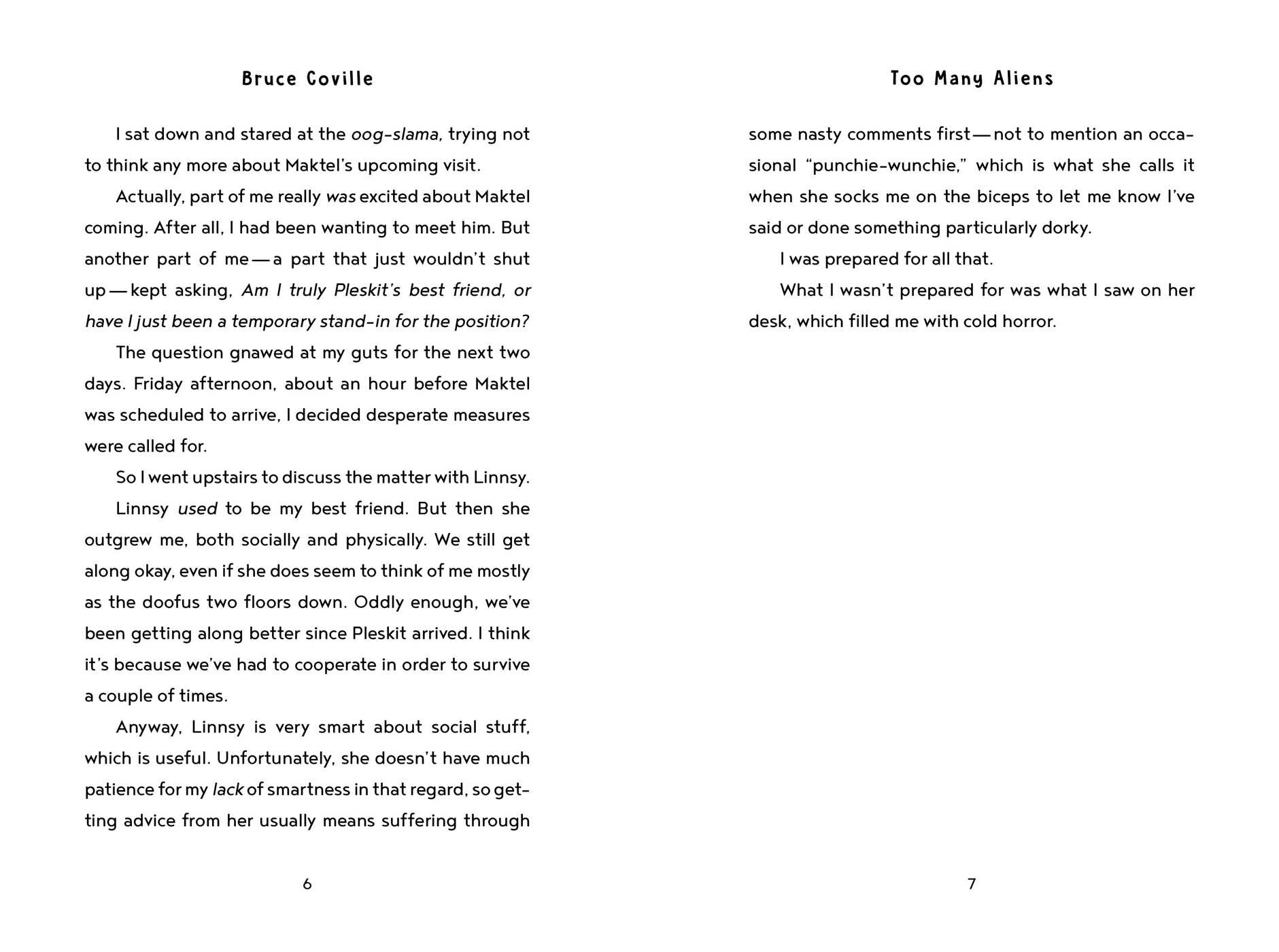 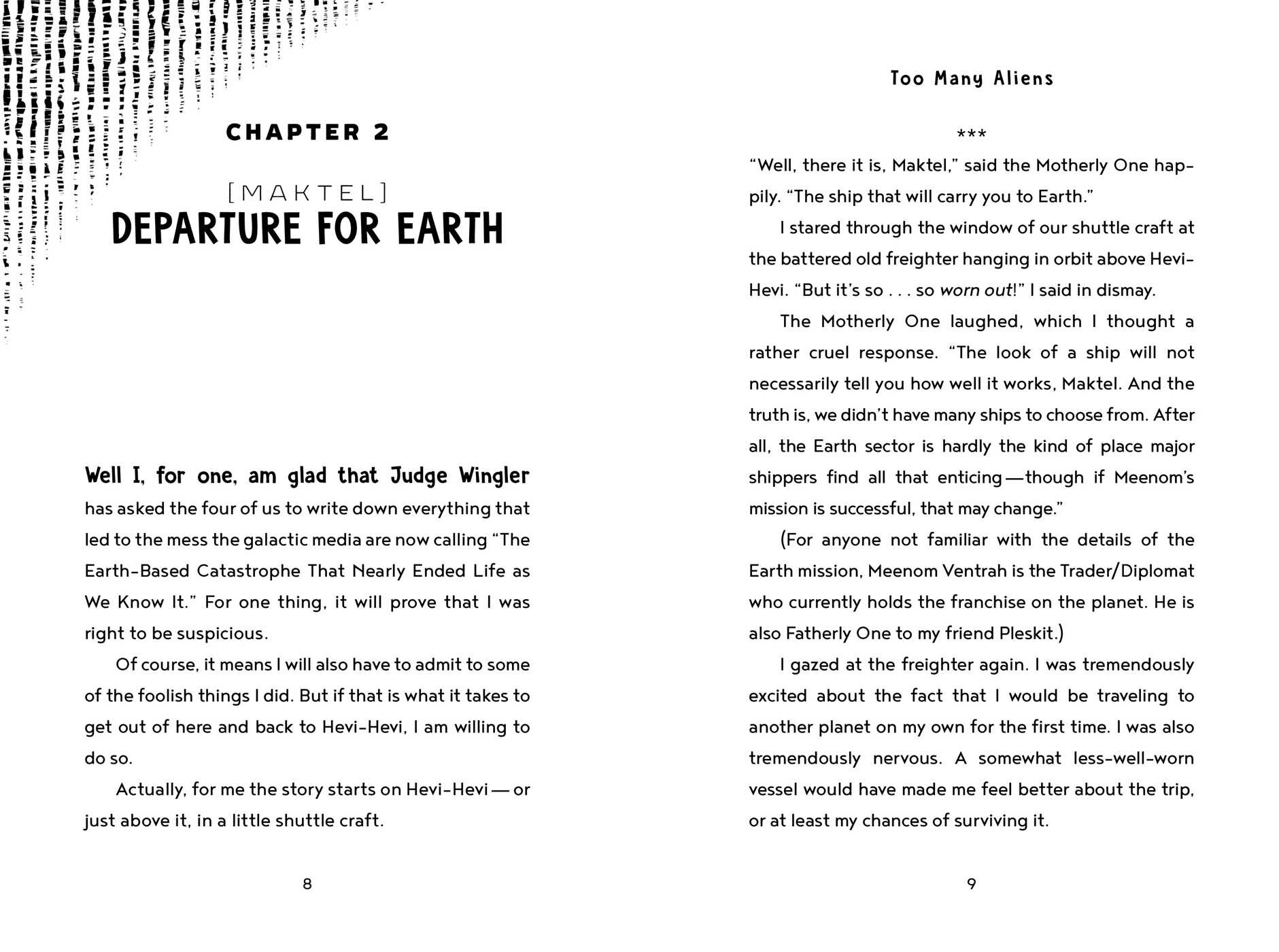 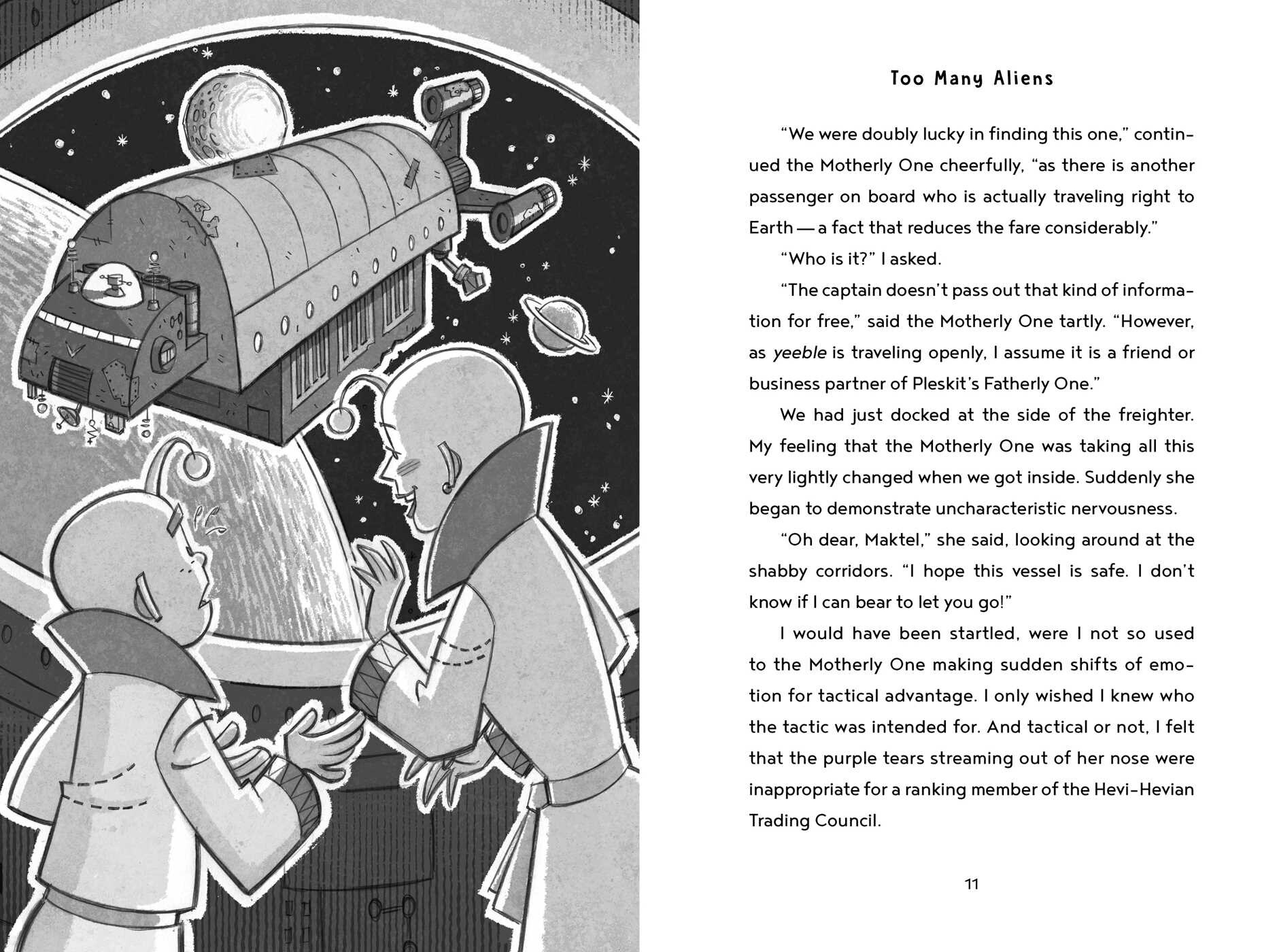 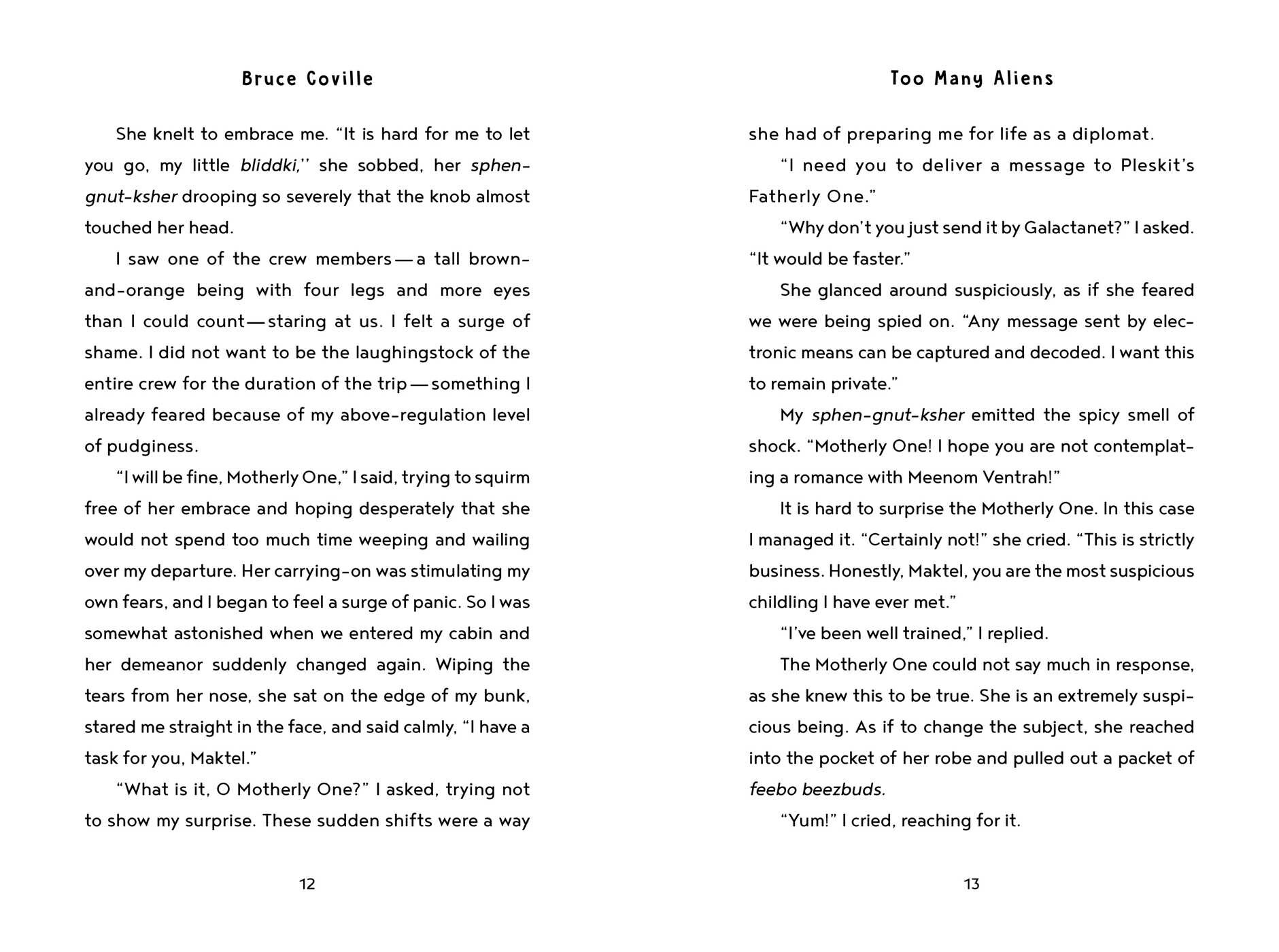 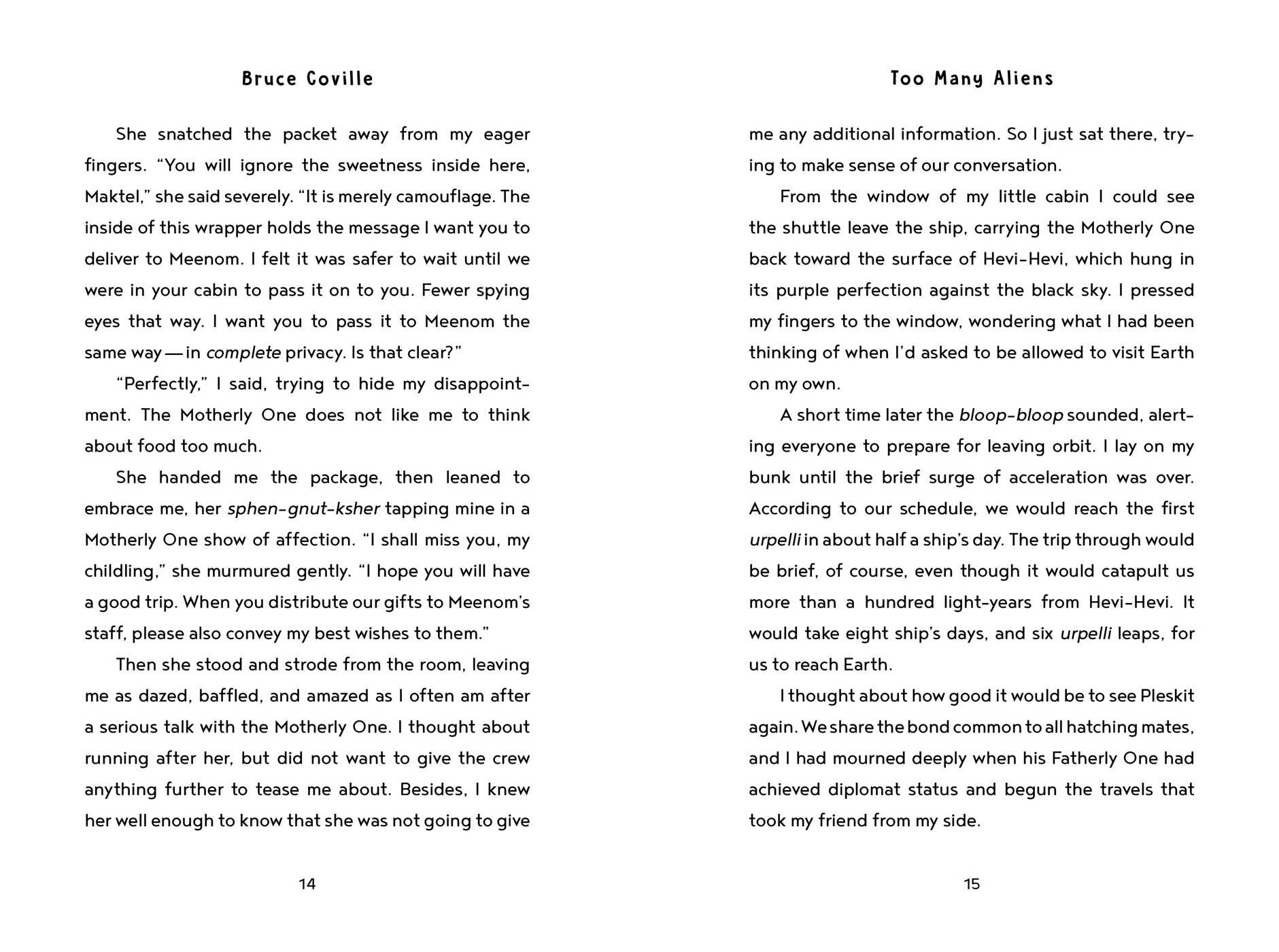 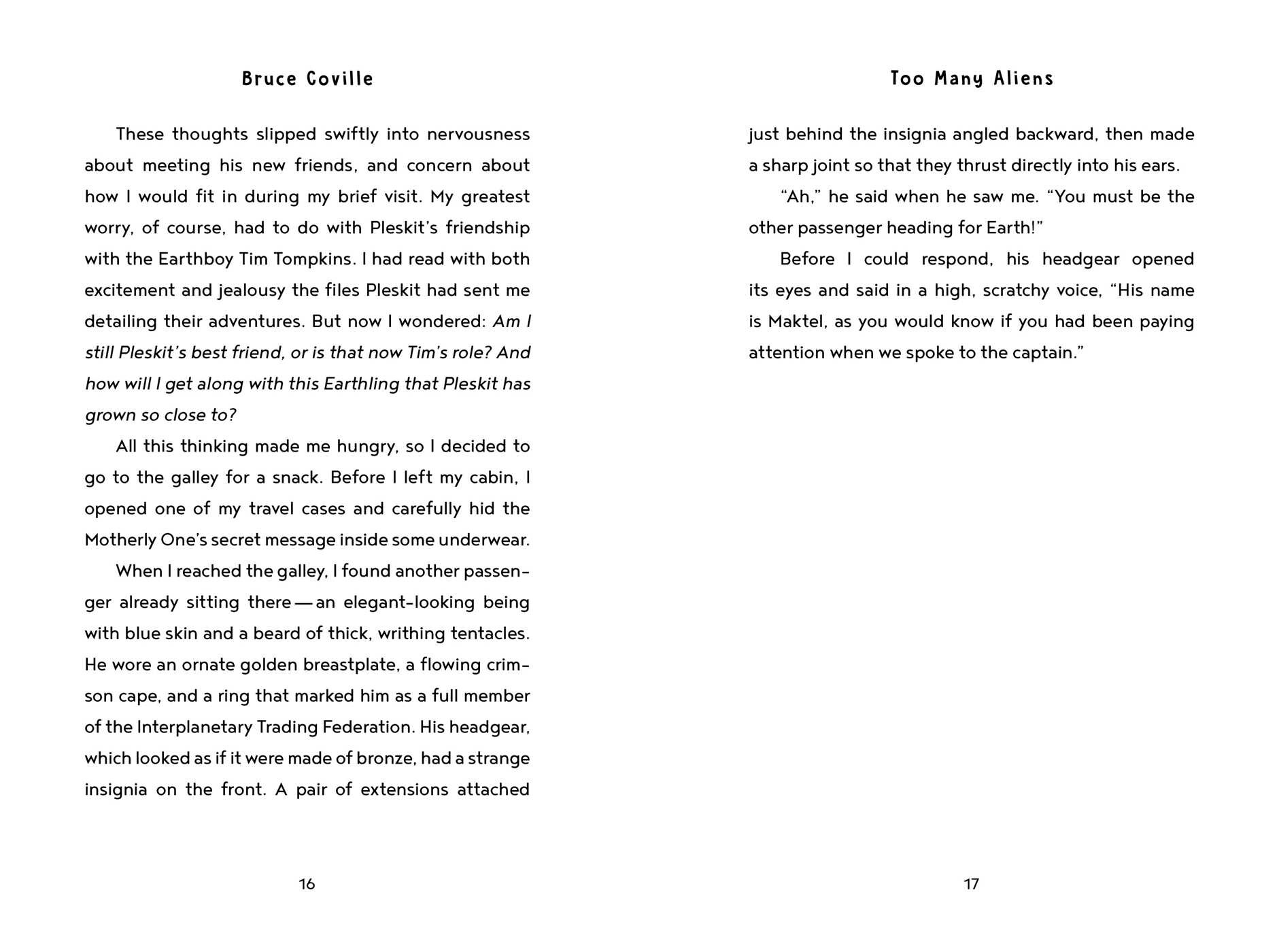 Book #7 of I Was A Sixth Grade Alien
By Bruce Coville
Illustrated by Glen Mullaly
LIST PRICE $6.99

Pleskit’s alien friend comes to visit in this seventh book in the hilarious, fast-paced, and accessible sci-fi series Sixth-Grade Alien from the bestselling author of Aliens Ate My Homework and My Teacher Is an Alien, Bruce Coville.

Maktel Geebrit, Pleskit’s best friend from back home on Hevi-Hevi, is finally going to visit him on Earth. Pleskit is excited, but a little nervous, too. How will Maktel get along with Pleskit’s new friend, Tim? And just how do you cope with having two best friends on the same planet, anyway?

As if that question weren’t enough, Pleskit’s Fatherly One has an off-world visitor, an elegant trader named Ellico vec Bur. But is Ellico really a friend, or is the trader also a traitor...the greatest menace that the mission to Earth has yet faced?

Chapter 1: [Tim]: Waiting for Maktel CHAPTER 1 [TIM] WAITING FOR MAKTEL
I am so scared. When Pleskit came to Earth, I never imagined I would end up being held in custody by an alien court on a planet hundreds of light-years from home.

I wonder if I’ll ever see it again.

Our law-speaker—the one helping Pleskit, Linnsy, Maktel, and me—says we should not be too worried. She says if we just write our statements, Judge Wingler will probably let us go. The Interplanetary Trading Federation just needs the information.

The judge is letting us work together. And he wants us to start at the beginning, which means I should mention the oog-slama, and waiting for Maktel. He also wants us to be totally honest, even about our emotions, which is a little like being totally naked, if you ask me. But if that’s what I have to do to get home—well, here goes…

My mother turned off the blender and looked at me nervously. “What moved, Tim?”

An oog-slama is something like a cross between an egg and a cocoon, and it’s one way shape-shifters on Hevi-Hevi reproduce. When Pleskit’s Veeblax had created an oog-slama, Pleskit passed it on to me. If I could actually get the oog-slama to turn into a Veeblax, not only would I finally have a pet of my own, I’d be the only kid on Earth (besides Pleskit, of course) whose pet came from another planet!

What made this particularly nerve-racking was the fact that an oog-slama can take anywhere from five days to fifteen years to turn into a Veeblax! It’s hard enough to wait for something when you know how long it’s going to take. It’s even worse when you have no idea when—or if—what you’re waiting for will happen.

My mother followed me back to my room. We picked our way across the mess on the floor to my desk, where I was keeping the oog-slama in a padded bowl. Next to it was the spray bottle I was using to mist it several times a day.

The oog-slama looked like a three-inch-long purple pickle. Pleskit had told me that as a Veeblax-to-be matures, the skin of an oog-slama will sometimes become transparent. But as of right now the skin was still opaque, so I couldn’t tell what (if anything) was happening inside it. That was one reason I had been so excited to see it move.

Mom and I stared at it for a long time.

“It did move,” I said forlornly. “Honest. It twitched.”

“That’s all right, Tim,” she said, putting her hand on my shoulder. “When I was pregnant with you, sometimes I would feel you move. But when I tried to let your father feel it, you would stop, and might go a whole day before you did it again.” She smiled. “You were stubborn even before you were born.”

She looked at me suspiciously. “All right, Timbo, what’s going on? You’ve been acting pretty glum for the last couple of days.”

“Nothing’s wrong!” I said, a little too hastily.

She bent over so we were face-to-face. “Look me straight in the eyes and say that.”

I couldn’t do it, of course, and I was annoyed at her for trapping me like this. On the other hand, something inside me felt like it was going to explode, so maybe it would be just as well to let it out. Trying to sound casual, I shrugged and said, “I’m just a little worried about what will happen when Maktel gets here.”

She looked surprised. “Why would you be worried about that? I thought when it came to aliens, your theory was ‘the more the better.’?”

Working to keep my voice from quavering, I said, “Mom, back on Hevi-Hevi, Maktel was Pleskit’s best friend.”

I hoped I wouldn’t have to explain more, so I was relieved when I saw the light go on in her eyes. “Ah,” she said softly. “And now Pleskit is your best friend, and you don’t know where you’ll stand when his old best friend shows up for a visit.”

I nodded, which was easier than trying to get any more words past the lump growing in my throat.

Mom took a deep breath. “Well, I can see why you would be wondering about that, honey. But I’m sure it will be fine.”

She made a face at me. “Have you talked to Pleskit about this?”

I looked at her as if she had lost her mind.

She pinched the top of her nose and sighed. “Tim, have you ever considered how weird it is for someone who thinks communication technology is the most interesting thing in the world to be so terrified by the idea of actually communicating?”

“You don’t understand,” I said.

“I never did,” she replied, in a voice that let me know she was thinking of my father.

Words aren’t the only way you can communicate.

She went back to her blender.

I sat down and stared at the oog-slama, trying not to think any more about Maktel’s upcoming visit.

Actually, part of me really was excited about Maktel coming. After all, I had been wanting to meet him. But another part of me—a part that just wouldn’t shut up—kept asking, Am I truly Pleskit’s best friend, or have I just been a temporary stand-in for the position?

The question gnawed at my guts for the next two days. Friday afternoon, about an hour before Maktel was scheduled to arrive, I decided desperate measures were called for.

So I went upstairs to discuss the matter with Linnsy.

Linnsy used to be my best friend. But then she outgrew me, both socially and physically. We still get along okay, even if she does seem to think of me mostly as the doofus two floors down. Oddly enough, we’ve been getting along better since Pleskit arrived. I think it’s because we’ve had to cooperate in order to survive a couple of times.

Anyway, Linnsy is very smart about social stuff, which is useful. Unfortunately, she doesn’t have much patience for my lack of smartness in that regard, so getting advice from her usually means suffering through some nasty comments first—not to mention an occasional “punchie-wunchie,” which is what she calls it when she socks me on the biceps to let me know I’ve said or done something particularly dorky.

I was prepared for all that.

What I wasn’t prepared for was what I saw on her desk, which filled me with cold horror.

Award-winning illustrator Glen Mullaly’s retro-styled illustrations and comics-inspired fun can be found in bestselling author Bruce Coville’s Sixth Grade Alien middle grade series, puzzle and paper-craft work for McDonald’s, publications for Dark Horse Comics, and his own line of fun greeting cards through Northwest Greetings. Glen also worked with Eisner and Inkpot Award–winning comic book artist Ken Steacy on Star Wars children’s books. Glen lives on the west coast of North America with his book-loving wife and their spiral-tailed cat who loves to help Glen with his work by leaving paw prints all over his illustrations whenever she can. Learn more at GlenMulally.com.

Book #7 of I Was A Sixth Grade Alien
By Bruce Coville
Illustrated by Glen Mullaly
LIST PRICE $6.99