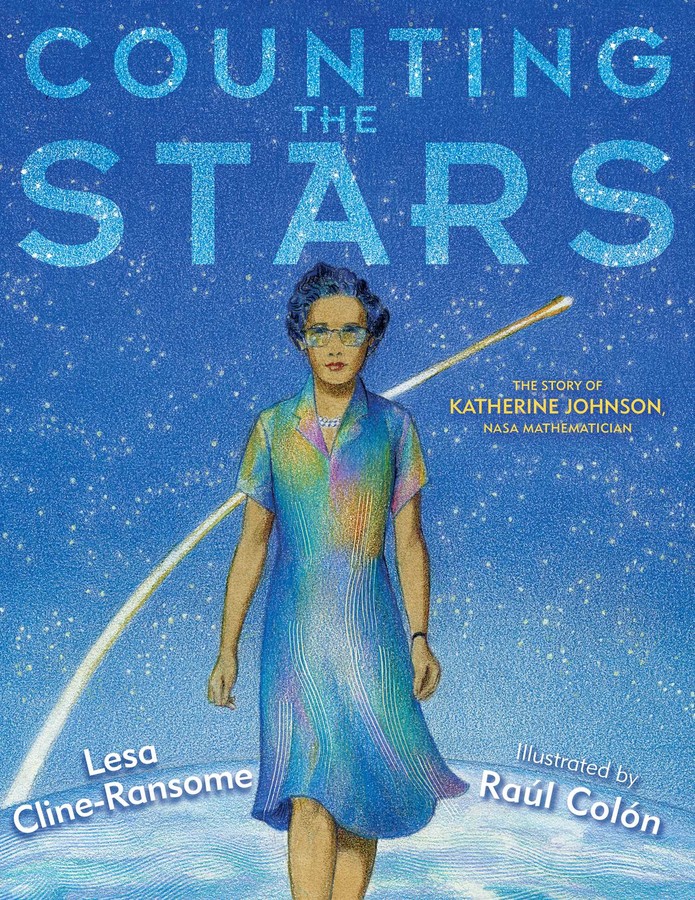 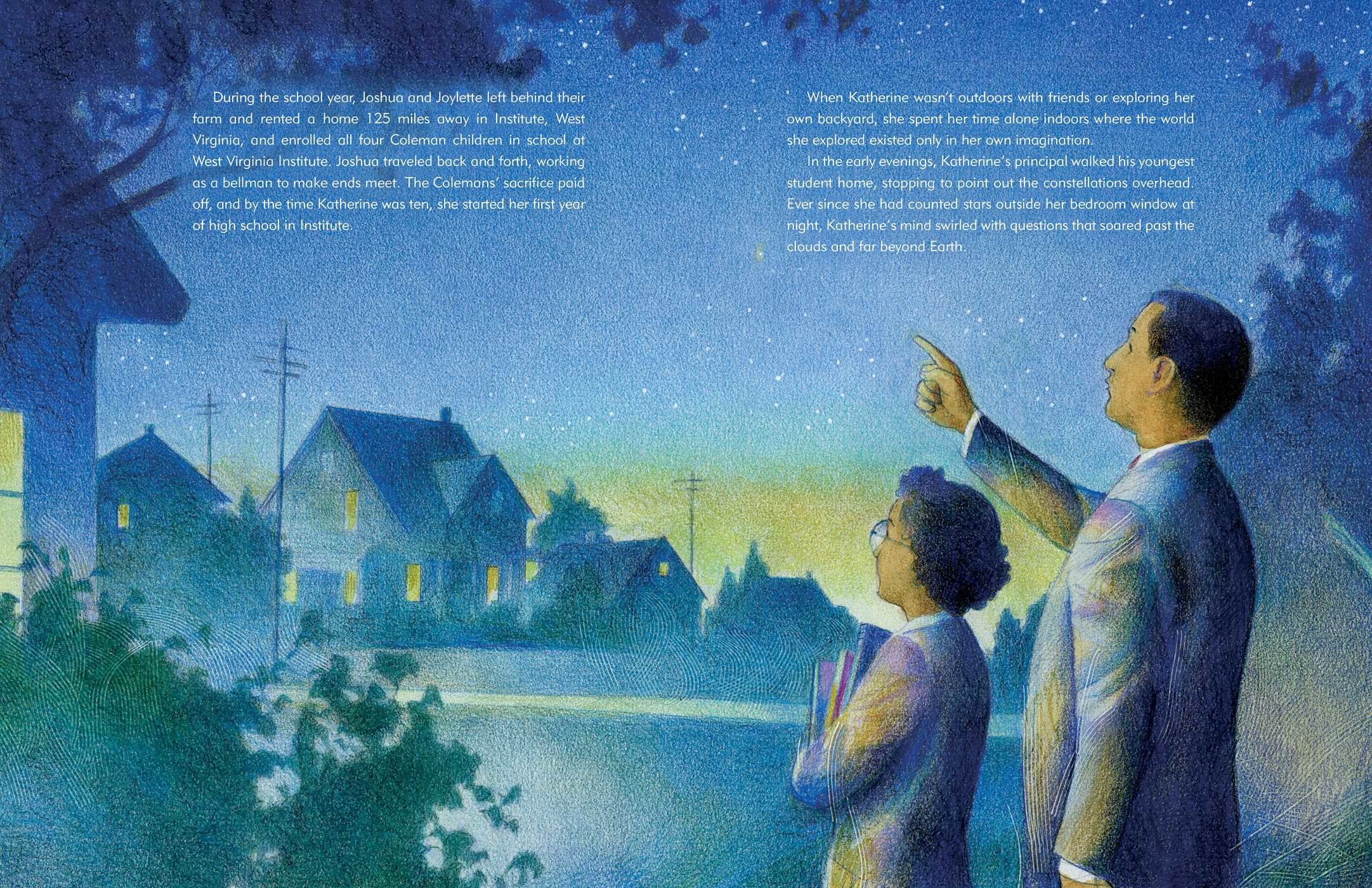 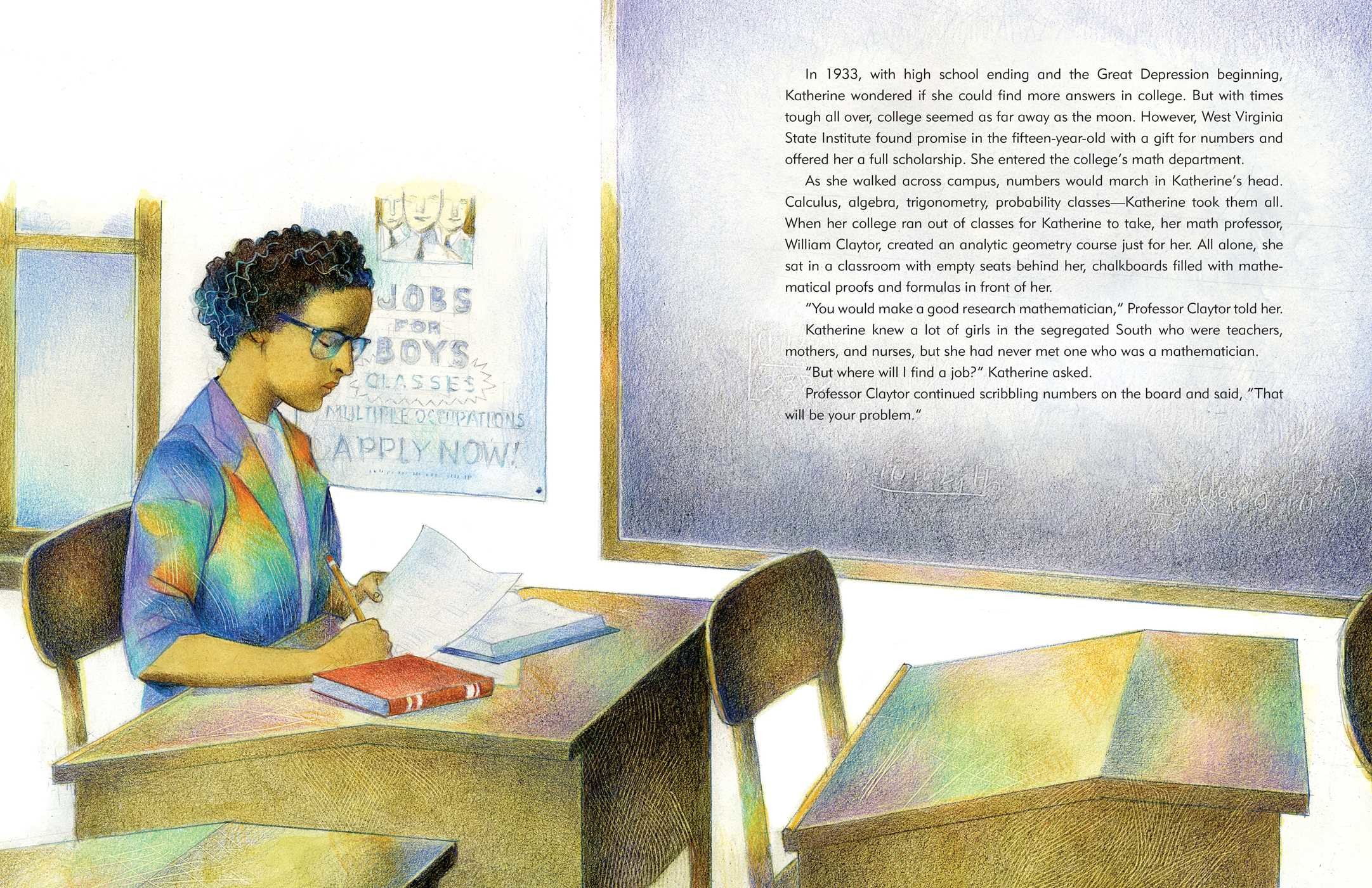 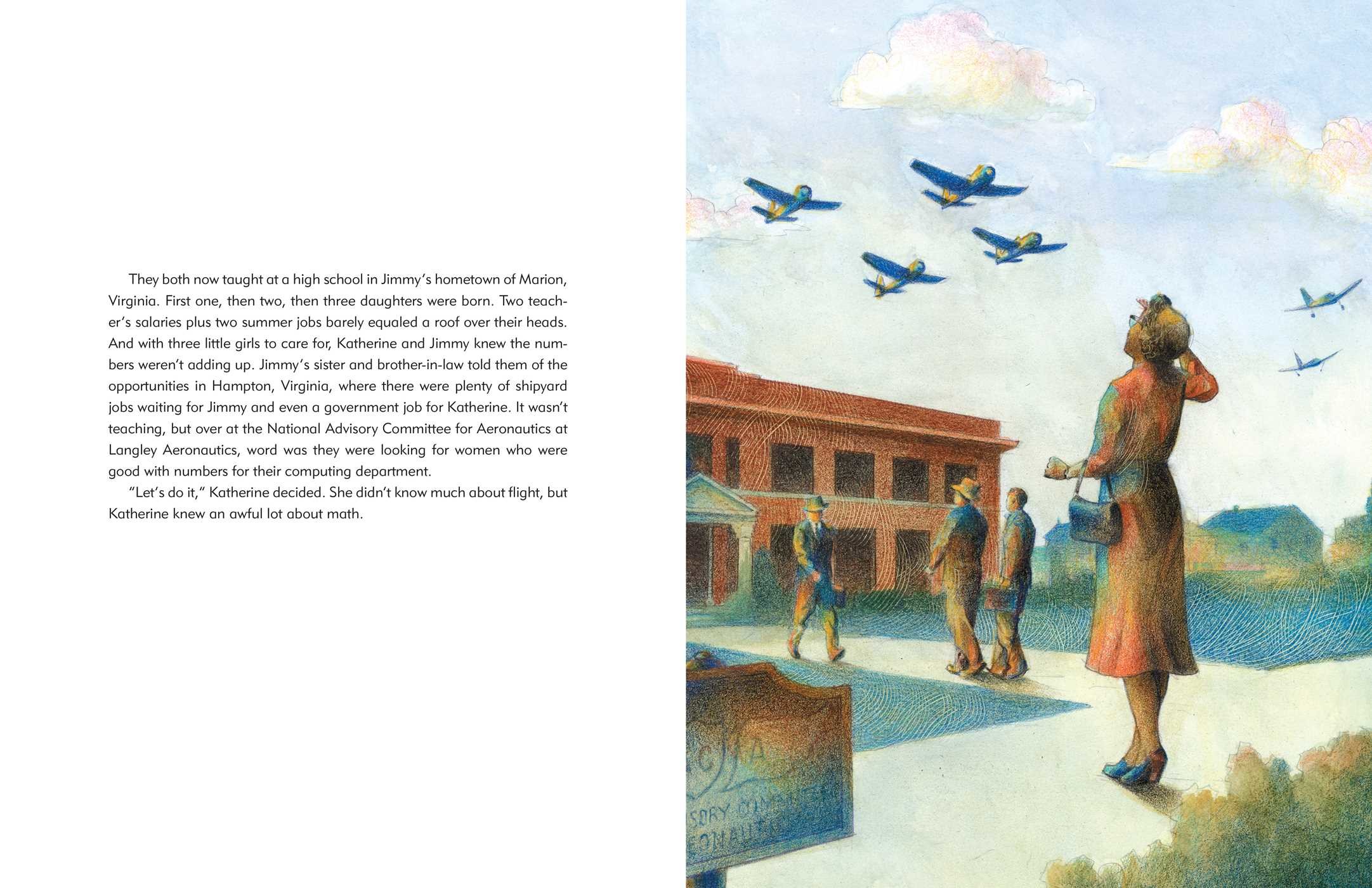 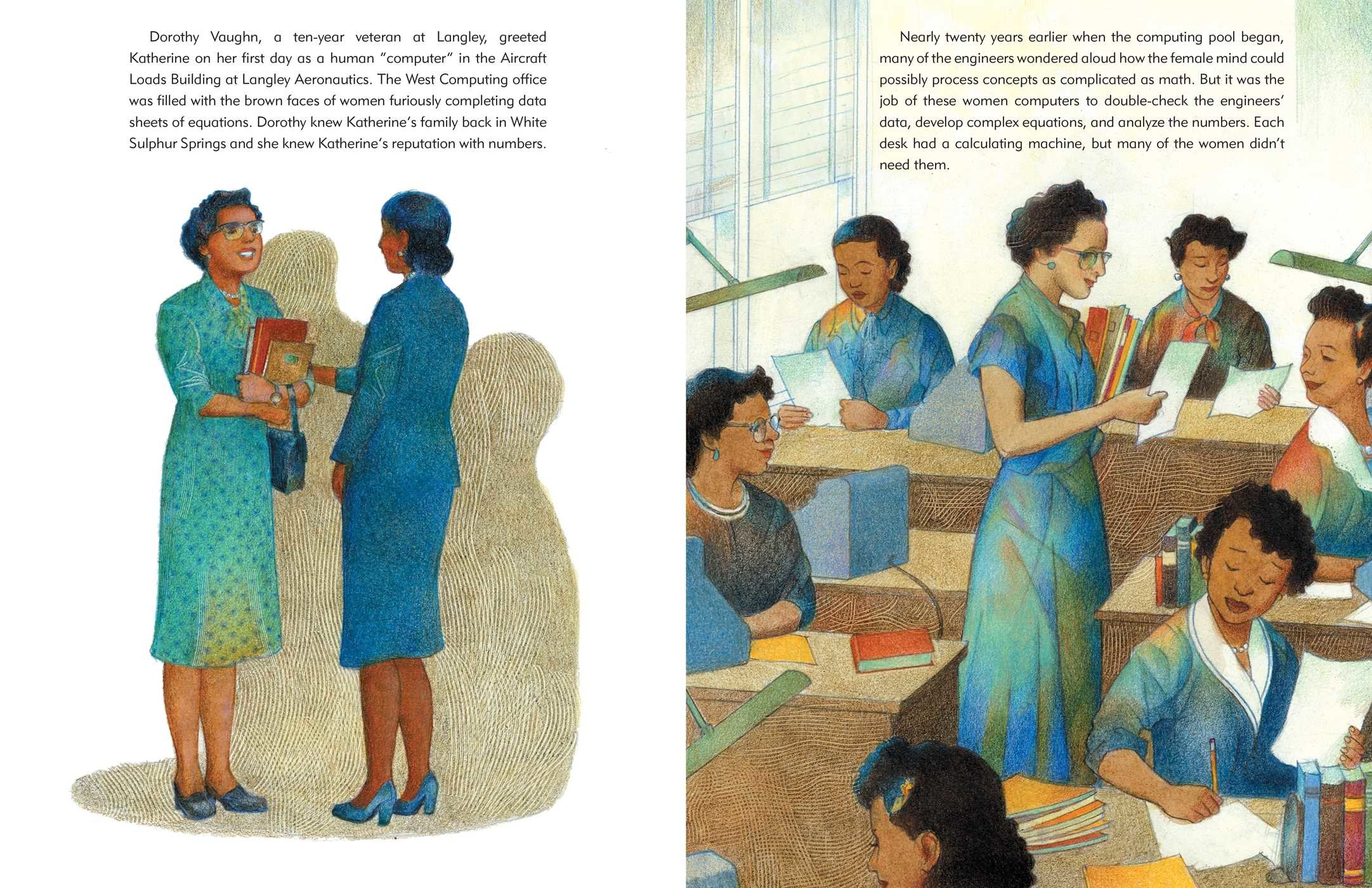 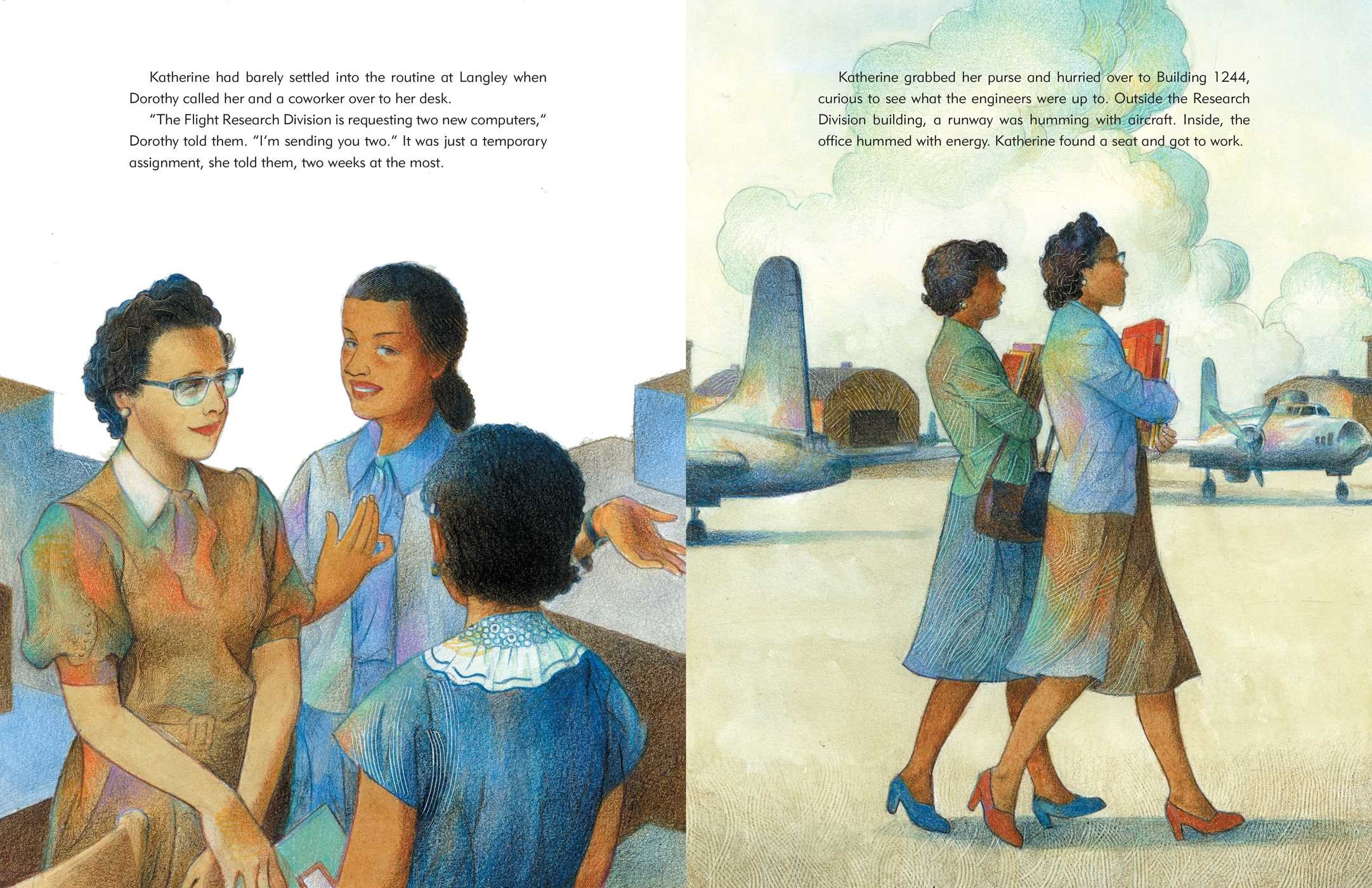 From award-winning author Lesa Cline-Ransome and acclaimed illustrator Raúl Colón comes the sensitive, informative, and inspiring picture book biography of the remarkable mathematician Katherine Johnson, one of the NASA “human computers” whose work was critical to the first US space launch.

Before John Glenn orbited the Earth or astronauts walked on the moon, a group of dedicated female mathematicians known as “human computers” used their knowledge, pencils, adding machines, and writing paper to calculate the orbital mechanics needed to launch spacecraft. Katherine Johnson was one of these mathematicians who used trajectories and complex equations to chart the space program. Even as Virginia’s Jim Crow laws were in place in the early 1950s, Katherine worked analyzing data at the NACA (later NASA) Langley laboratory.

In 1962, as NASA prepared for the orbital mission of John Glenn, Katherine Johnson was called upon and John Glenn said “get the girl” (Katherine Johnson) to run the numbers by hand to chart the complexity of the orbital flight. He knew that his flight couldn’t work without her unique skills.

President Barack Obama awarded Katherine Johnson the Presidential Medal of Freedom in 2015 and her incredible life inspired the Oscar-nominated film Hidden Figures. Get to know this incredible and inspirational woman with this beautifully illustrated picture book from an award-winning duo.

Cline-Ransome (Finding Langston, 2018, etc.) traces Johnson's love of math, curiosity about the world, and studiousness from her early entry to school through her help sending a man into space as a human computer at NASA. .... Many biographies of black achievers during segregation focus on society's limits and the subject's determination to reach beyond them. This book takes a subtler approach, mentioning segregation only once (at her new work assignment, "she ignored the stares and the COLORED GIRLS signs on the bathroom door and the segregated cafeteria") and the glass ceiling for women twice in a factual tone as potential obstacles that did not stop Johnson. Her work is described in the context of the space race, which helps to clarify the importance of her role. Colón's signature soft, textured illustrations evoke the time period and Johnson's feeling of wonder about the world, expressed in the refrain, "Why? What? How?" ... A detail-rich picture book best for readers who enjoy nonfiction and are interested in history or science. (Picture book/biography. 9-12)

Cline-Ransome’s picture book biography pays tribute to African-American math prodigy Katherine Johnson, who soared past societal barriers to become one of NASA’s celebrated human computers. In long text blocks, the narrative underlines Johnson’s mathematical prowess and natural inquisitiveness (“Why? What? How?”), focusing on her early life (counting stars, skipping grades, earning a full college scholarship at 15), marriage and parenthood, and her career at Langley (early assignments, work amid the space race, persuading higher-ups that she should attend meetings) up through calculating the trajectory of astronaut John Glenn’s 1962 Earth orbit. Colón’s trademark illustrations, with their combed-through textures, set Johnson apart visually; her rainbow-hued dresses radiate alongside her white male colleagues’ white apparel. An author’s note concludes this handsomely illustrated book about a Hidden Figures standout. Ages 4–8. (Oct.)

Katherine Johnson, one of the African American mathematicians featured in the movie Hidden Figures, gets a solid introduction in this picture book for older readers. Born in West Virginia to parents who highly prized education, Johnson was a math whiz who started high school at age 10. Her extraordinary skills and mentoring helped her to eventually get a job at Langley Aeronautical Laboratory. When the space-flight unit asked for a "computer," as the women were called, she became an integral part of the team calculating flight paths. John Glenn wouldn't go up for his groundbreaking flight until she ran the numbers—a check on mechanical computers. ...Colón's attractive illustrations, often with hints of colored prisms, reflect the book's tone with the emphasis on accomplishment. An author's note adds heft to this attractive introduction to Johnson's life.

SEE ALL
See more by Raúl Colón
Thank you for signing up, fellow book lover!