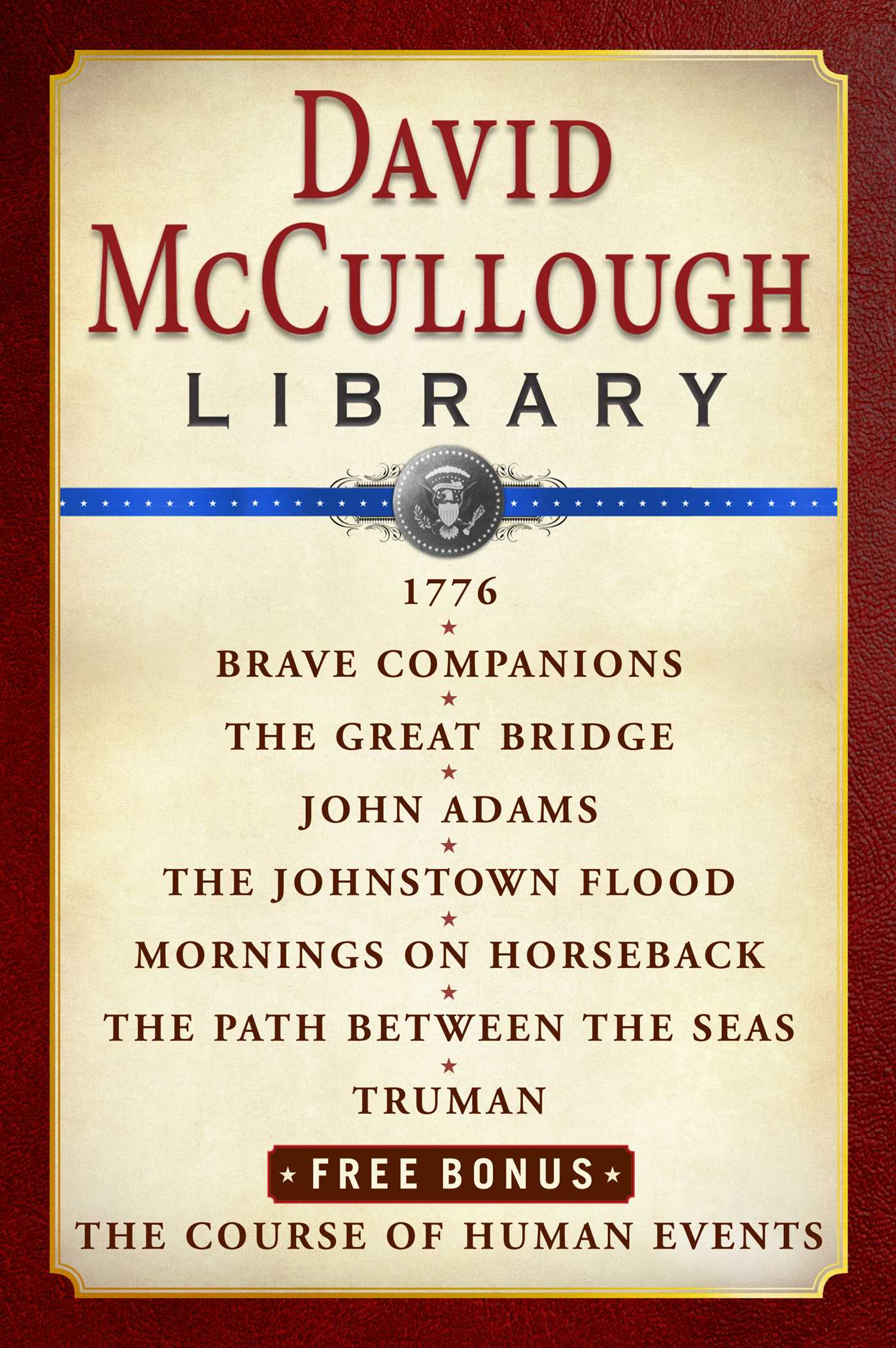 1776, Brave Companions, The Great Bridge, John Adams, The Johnstown Flood, Mornings on Horseback, Path Between the Seas, Truman, The Course of Human Events

Perfect for David McCullough fans and history lovers alike, this eBook boxed set features all of his bestselling titles, from 1776 to Mornings on Horseback.

·         1776: The riveting story of George Washington, the men who marched with him, and their British foes in the momentous year of American independence.

·         The Great Bridge: The remarkable, enthralling story of the planning and construction of the Brooklyn Bridge, which linked two great cities and epitomized American optimism, skill, and determination.

·         John Adams: The magisterial, Pulitzer Prize-winning biography of the independent, irascible Yankee patriot, one of our nation’s founders and most important figures, who became our second president.

·         The Johnstown Flood: The classic history of an American tragedy that became a scandal in the age of the Robber Barons, the preventable flood that destroyed a town and killed 2,000 people.

·         Mornings on Horseback: The brilliant National Book Award-winning biography of young Theodore Roosevelt’s metamorphosis from sickly child to a vigorous, intense man poised to become a national hero and then president.

·         Path Between the Seas: The epic National Book Award-winning history of the heroic successes, tragic failures, and astonishing engineering and medical feats that made the Panama Canal possible.

·         Truman: The Pulitzer Prize-winning biography of Harry Truman, the complex and courageous man who rose from modest origins to make momentous decisions as president, from dropping the atomic bomb to going to war in Korea.

·         Special Bonus: The Course of Human Events: In this Jefferson Lecture in the Humanities, David McCullough draws on his personal experience as a historian to acknowledge the crucial importance of writing in history’s enduring impact and influence, and he affirms the significance of history in teaching us about human nature through the ages.

David McCullough has twice received the Pulitzer Prize, for Truman and John Adams, and twice received the National Book Award, for The Path Between the Seas and Mornings on Horseback. His other acclaimed books include The Johnstown Flood, The Great Bridge, Brave Companions, 1776, The Greater Journey, The American Spirit, and The Wright Brothers. He is the recipient of numerous honors and awards, including the Presidential Medal of Freedom, the nation’s highest civilian award. Visit DavidMcCullough.com.

1776, Brave Companions, The Great Bridge, John Adams, The Johnstown Flood, Mornings on Horseback, Path Between the Seas, Truman, The Course of Human Events

SEE ALL
See more by David McCullough
Thank you for signing up, fellow book lover!