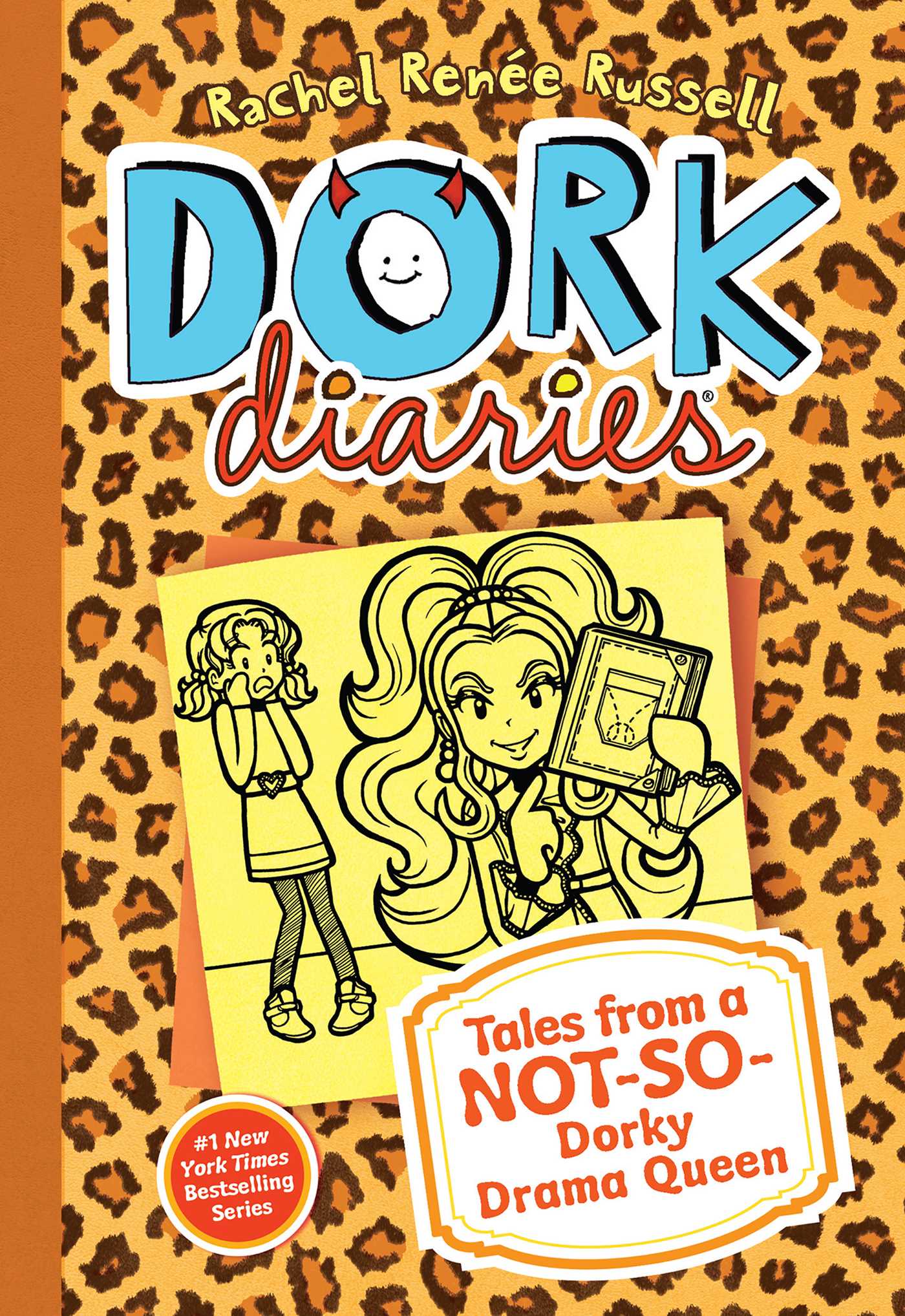 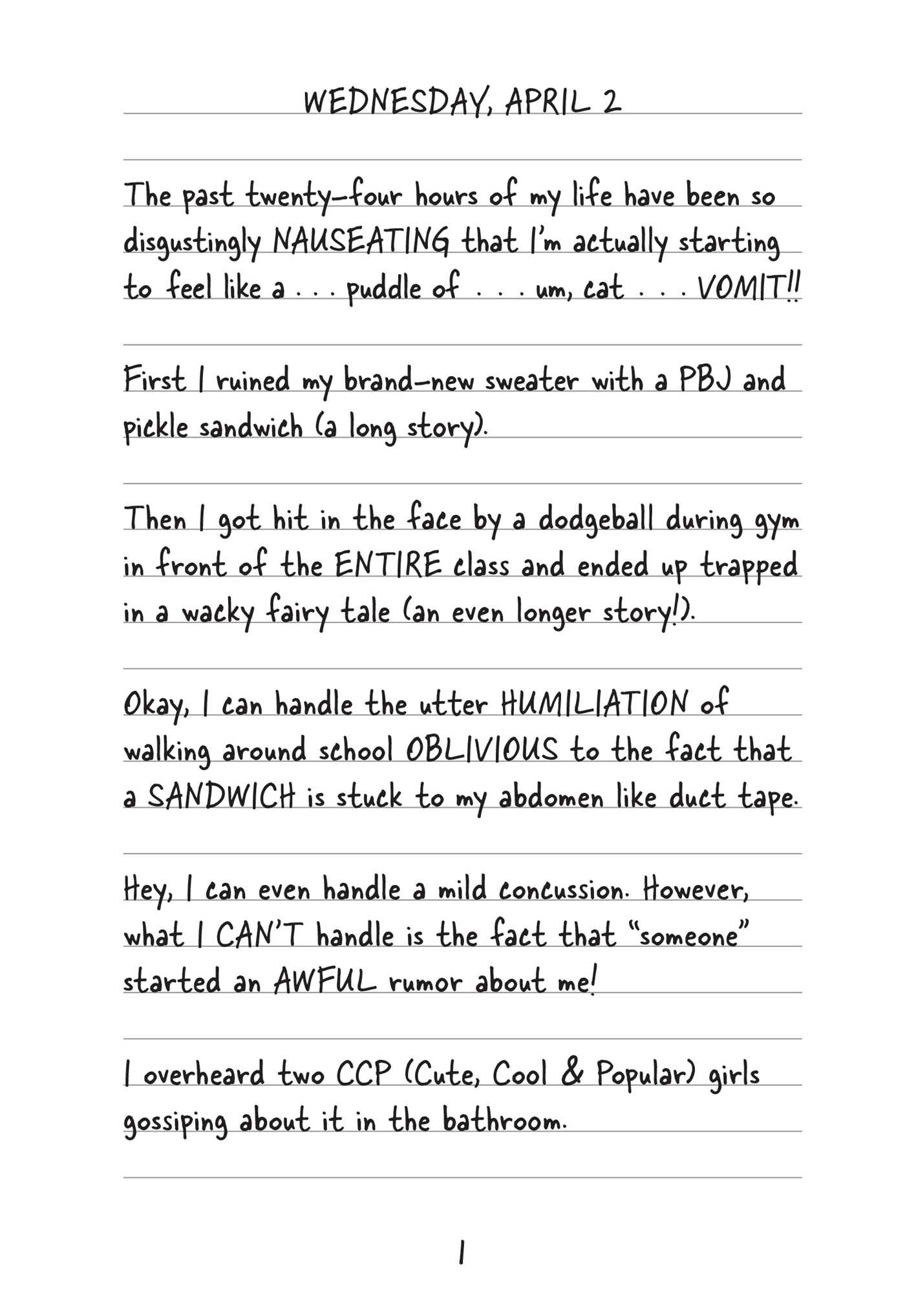 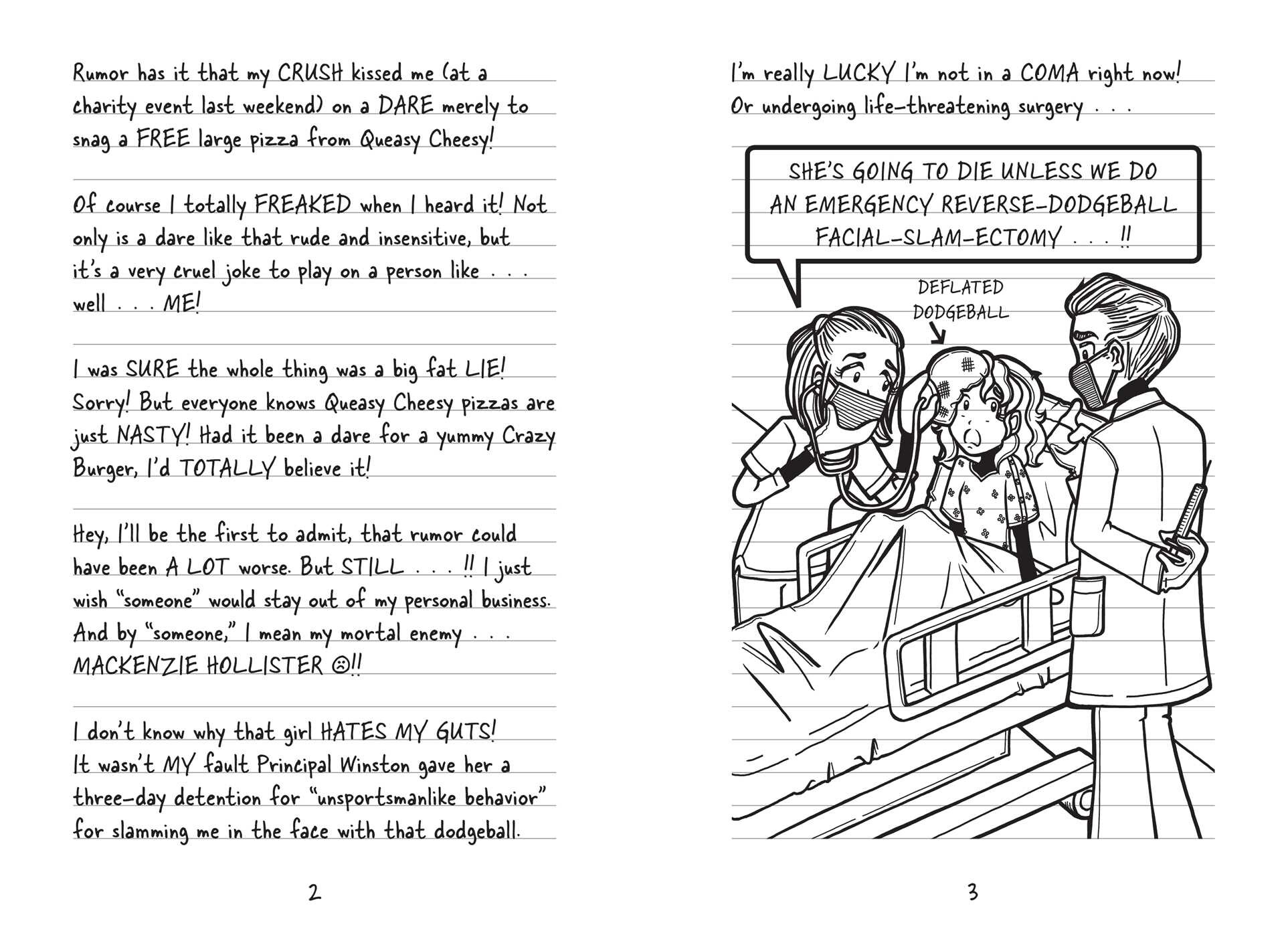 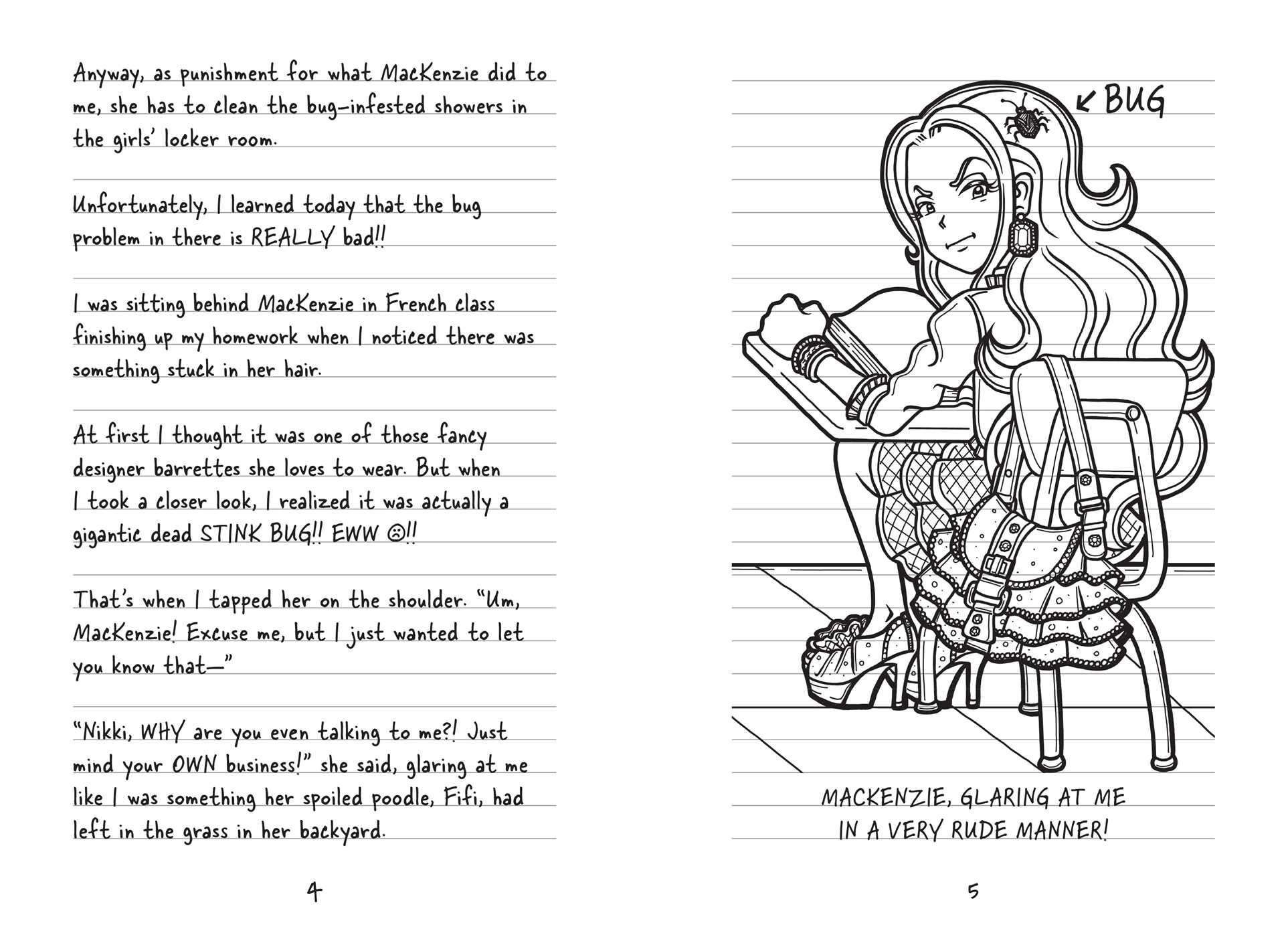 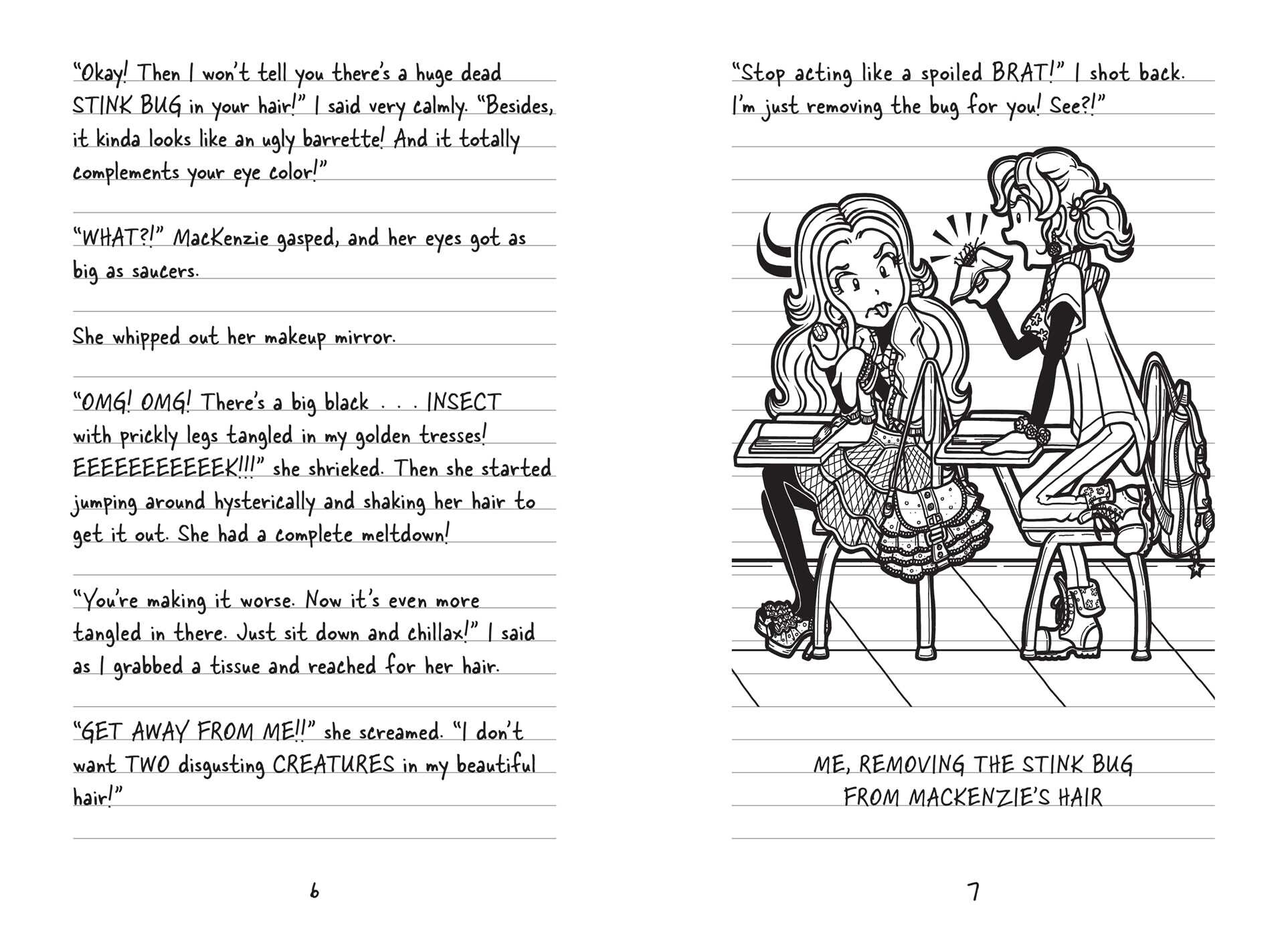 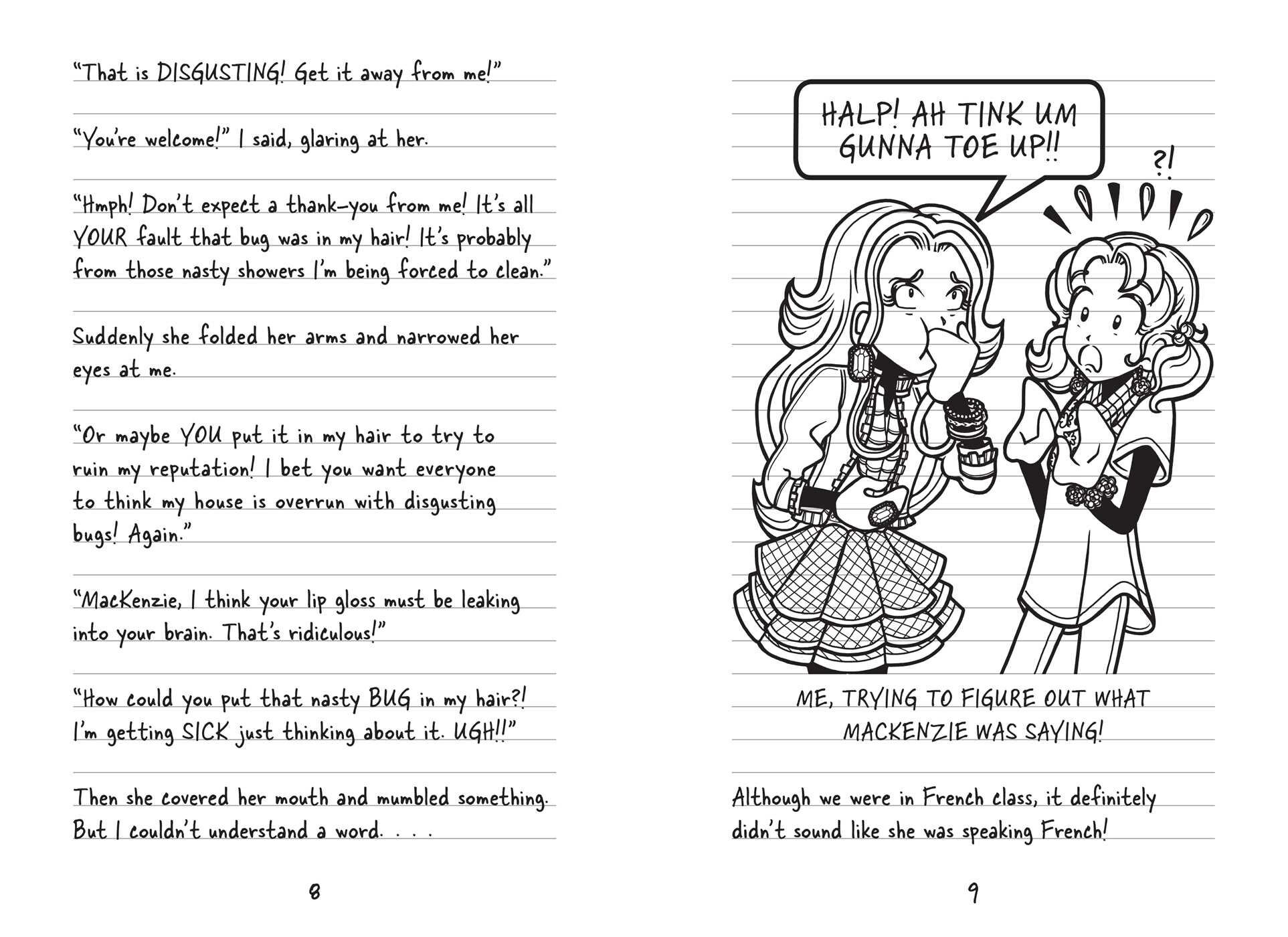 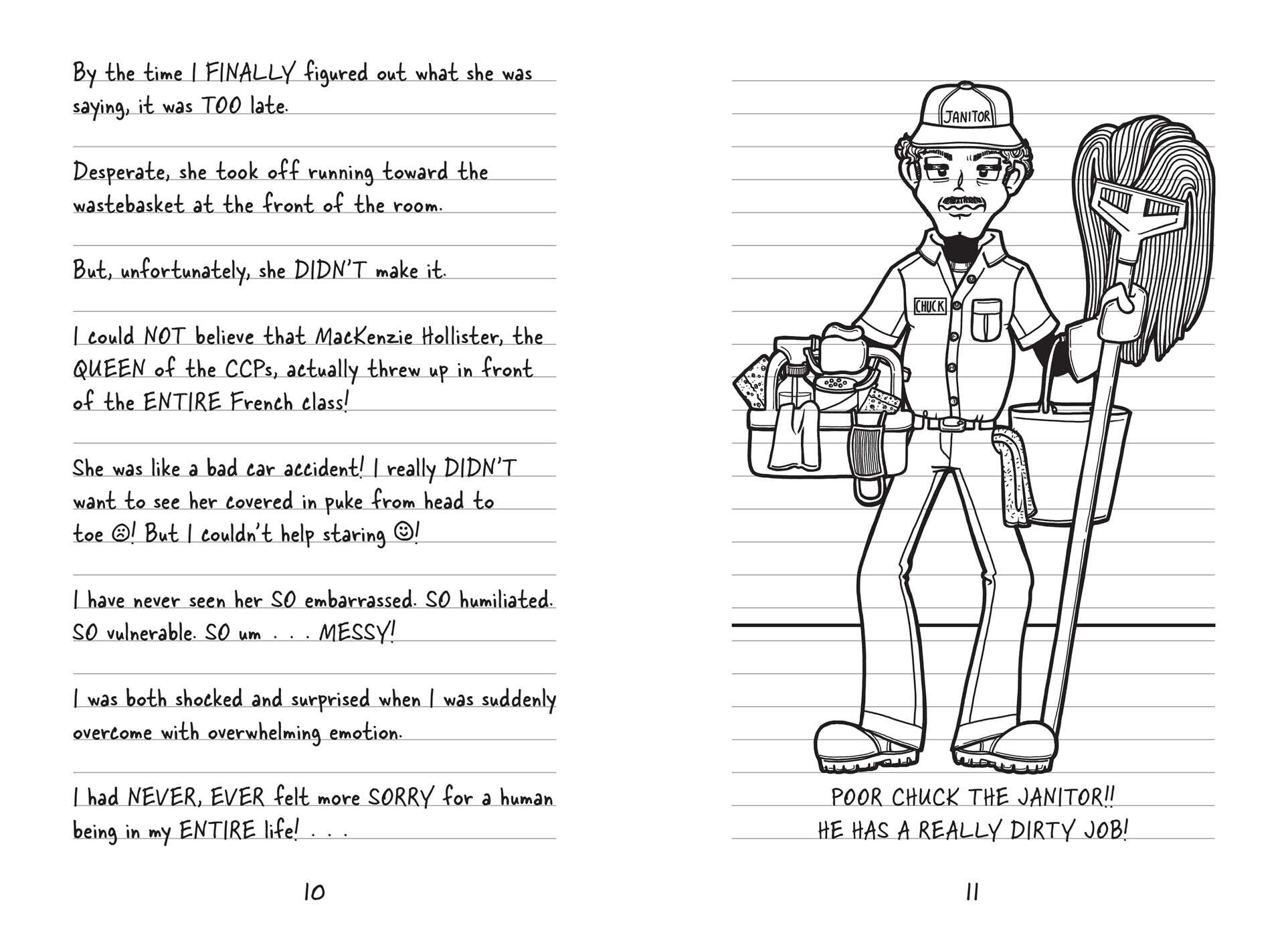 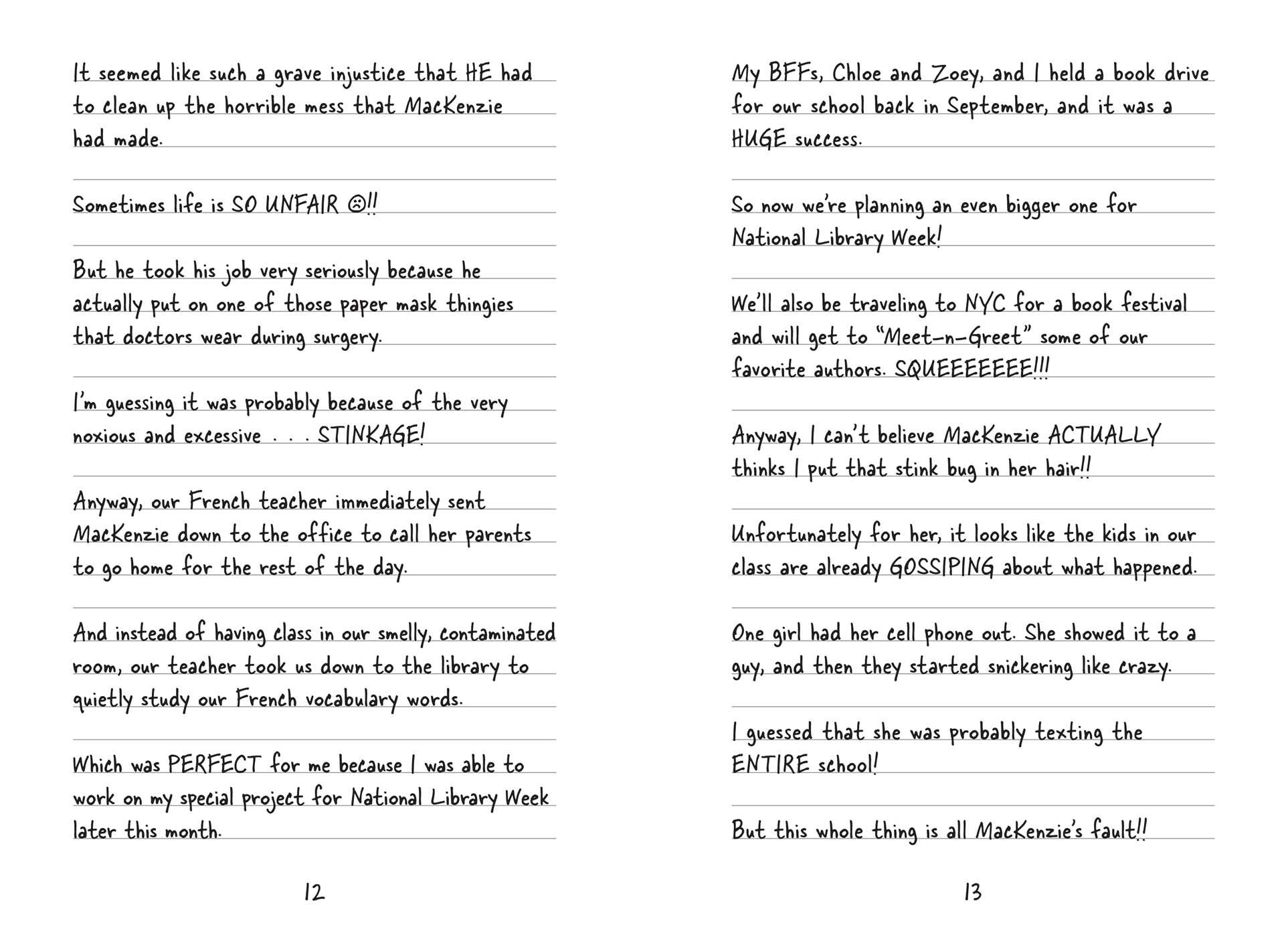 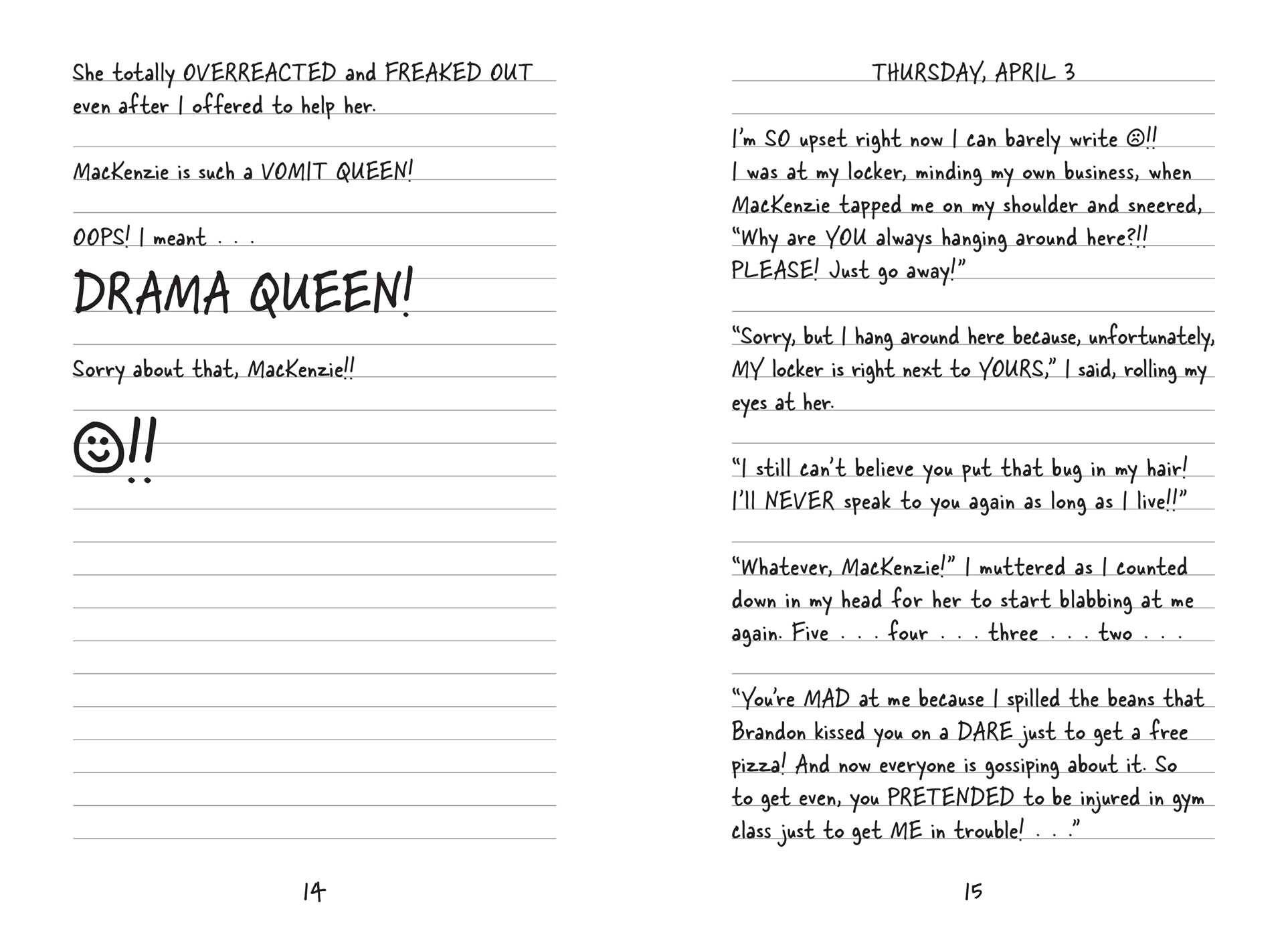 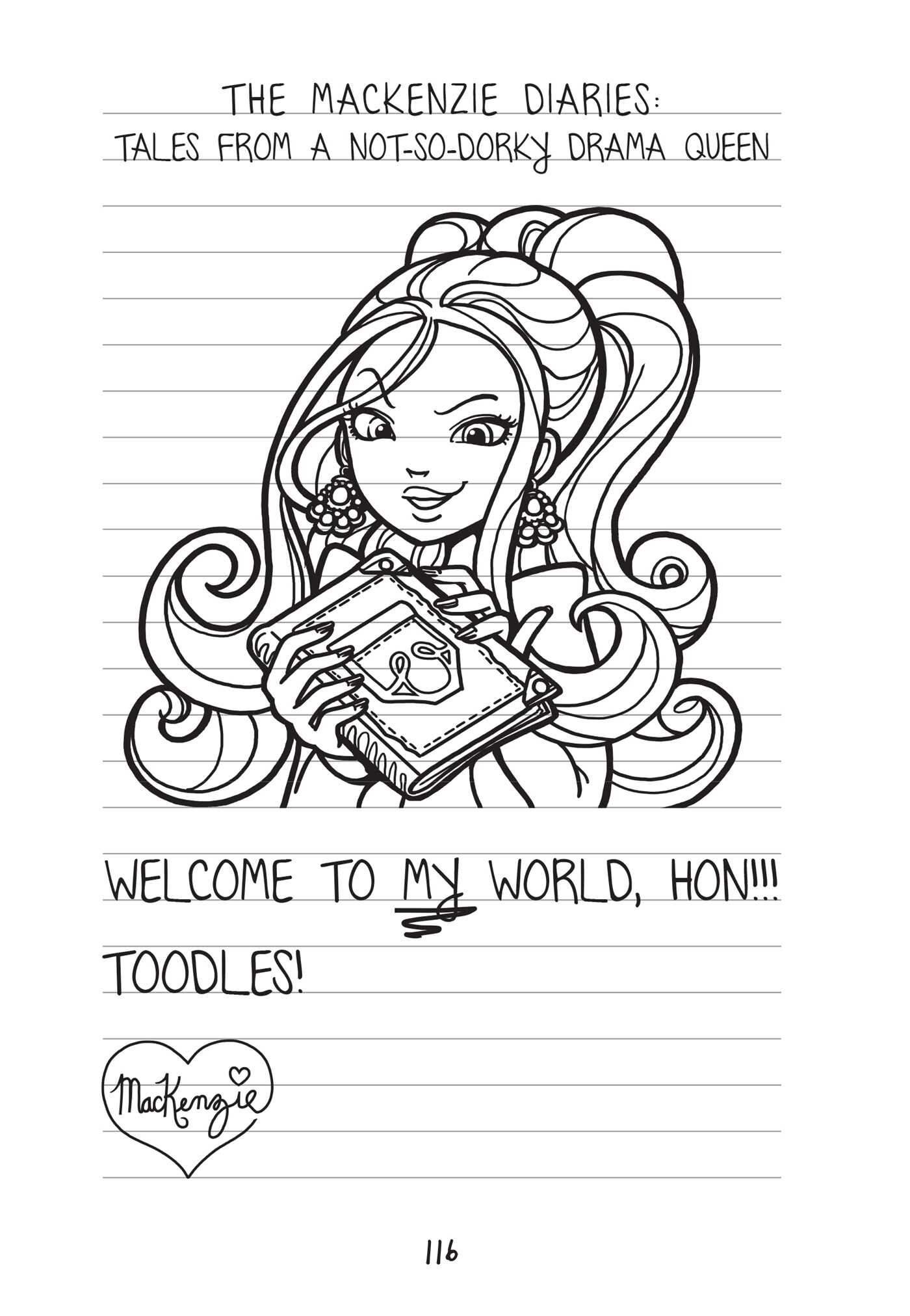 Tales from a Not-So-Dorky Drama Queen

A certain member of the CCP girls Dork fans know all about has gotten her hands on Nikki’s diary and has decided to share some thoughts of her own…Find out what happens when Nikki’s worst nightmare becomes a reality. Welcome to MacKenzie’s world!!

Dork Diaries 9 WEDNESDAY, APRIL 2
The past twenty-four hours of my life have been so disgustingly NAUSEATING that I’m actually starting to feel like a . . . puddle of . . . um, cat . . . VOMIT!!

First I ruined my brand-new sweater with a PBJ and pickle sandwich (a long story).

Then I got hit in the face by a dodgeball during gym in front of the ENTIRE class and ended up trapped in a wacky fairy tale (an even longer story!).

Okay, I can handle the utter HUMILIATION of walking around school OBLIVIOUS to the fact that a SANDWICH is stuck to my abdomen like duct tape.

Hey, I can even handle a mild concussion. However, what I CAN’T handle is the fact that “someone” started an AWFUL rumor about me!

I overheard two CCP (Cute, Cool & Popular) girls gossiping about it in the bathroom.

Rumor has it that my CRUSH kissed me (at a charity event last weekend) on a DARE merely to snag a FREE large pizza from Queasy Cheesy!

Of course I totally FREAKED when I heard it! Not only is a dare like that rude and insensitive, but it’s a very cruel joke to play on a person like . . . well . . . ME!

I was SURE the whole thing was a big fat LIE! Sorry! But everyone knows Queasy Cheesy pizzas are just NASTY! Had it been a dare for a yummy Crazy Burger, I’d TOTALLY believe it!

Hey, I’ll be the first to admit, that rumor could have been A LOT worse. But STILL . . . !! I just wish “someone” would stay out of my personal business. And by “someone,” I mean my mortal enemy . . . MACKENZIE HOLLISTER !!

I don’t know why that girl HATES MY GUTS! It wasn’t MY fault Principal Winston gave her a three-day detention for “unsportsmanlike behavior” for slamming me in the face with that dodgeball.

Anyway, as punishment for what MacKenzie did to me, she has to clean the bug-infested showers in the girls’ locker room.

Unfortunately, I learned today that the bug problem in there is REALLY bad!!

I was sitting behind MacKenzie in French class finishing up my homework when I noticed there was something stuck in her hair.

At first I thought it was one of those fancy designer barrettes she loves to wear. But when I took a closer look, I realized it was actually a gigantic dead STINK BUG!! EWW !!

That’s when I tapped her on the shoulder. “Um, MacKenzie! Excuse me, but I just wanted to let you know that—”

“Nikki, WHY are you even talking to me?! Just mind your OWN business!” she said, glaring at me like I was something her spoiled poodle, Fifi, had left in the grass in her backyard.

Tales from a Not-So-Dorky Drama Queen