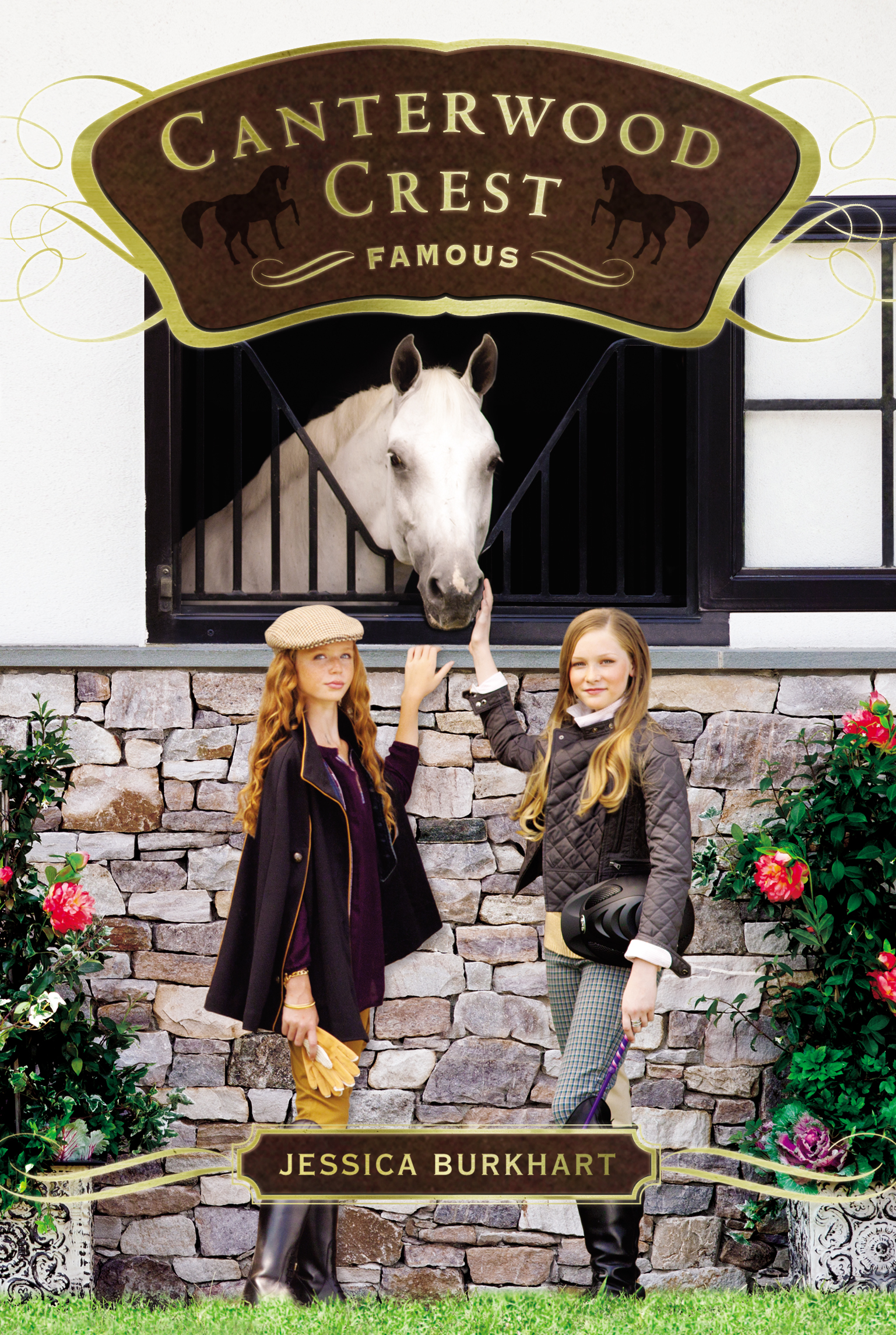 The new exchange student means serious competition for Lauren and her friends—because at Canterwood Crest, only one rider can be at the top.

Rankings on Canterwood’s intermediate team are falling into place—in Lauren’s favor. Then blond, beautiful foreign exchange student Carina arrives. The new girl puts on a million-watt smile, but it doesn’t dazzle LT. Carina is out to show Canterwood students just how riders from her home country of Sweden take the arena. And with a local show on the horizon, Carina’s especially ready to impress—which means Lauren and her friends better be especially ready to represent, because Carina’s in place to steal the spotlight.

TELL ME EVERYTHING
EVERYONE—MOM, DAD, BECCA, AND Brielle—grinned at me. They all stared, waiting for my reaction to Brielle’s sudden proclamation. But I stood frozen in the Canterwood Crest parking lot. Brielle’s words from seconds earlier rang through my head: Now your bestie from home is here!

She wasn’t a student at Yates.

As of today, Brielle Monaco was an official Canterwood Crest Academy student.

Blond Brielle, who’d just released me from a hug, put both hands on my upper arms and gently shook me.

“Laaaureeen? Hello?! Omigod, are you speechless or what?!” Brielle asked.

I nodded, furiously trying to form words. “I—oh my God—Bri—” I stopped and took a deep breath. Everything was finally starting to sink in. “Brielle Monaco, you go here now! This is the biggest surprise ever!”

Brielle laughed. “I can’t believe I pulled it off. There’s no way I would have without your parents and Becca.”

“So many things make sense now,” I said. “I couldn’t figure out how you’d really gotten on campus for a family-only day. Or why you seemed so off at times. I can’t believe two of my Union friends are here now.”

Brielle frowned a little at my last sentence. I remembered her earlier fight with Taylor, my ex-boyfriend who was also from Union, and felt bad for bringing him up.

“We’ve got a lot to talk about,” I said, slinging my arm over Bri’s shoulder. I wiggled my fingers into my fleece jacket—the late November air was cold, and I wondered if we’d see snow at the Connecticut boarding school soon.

“We’re going to leave you girls to catch up,” Mom said from the passenger seat in our SUV.

“Have fun, you two!” Becca, my older sister, called from the backseat.

Dad waved, backed up the SUV, and guided the vehicle out of the parking lot and down Canterwood’s driveway.

I hugged Bri, laughing. I tugged on her coat and pulled her in the direction of the dorms.

“Let’s go inside before we freeze, and you are going to tell me everything,” I said.

Giggling, we made our way through the mass of students and parents who were headed for the parking lot and walked back to Hawthorne—my dorm hall.

“Take it all in,” I said, breathing deeply. “Looking at this campus never gets any less exciting.”

Bri’s eyes were wide as she nodded. “I had a feeling that was true. Even though I was here all day, I don’t really think I saw the campus for what it is.”

We went up a winding sidewalk away from the stable. As we walked, we passed a pasture with turned-out horses. Two horses, blanketed, lay down next to each other.

Bri asked me to point out buildings to her—even ones I’d told her about this morning when I’d given her the tour with my family.

“Of course,” I said. “It would be insane to think you’d remember where everything is after an afternoon. It took me days of getting turned around to finally be able to stop sending SOS texts to Khloe that I was lost.”

The three-story building was home to dozens of seventh-grade girls. Bri’s eyes were wide as she stared up at the building. I could tell the realization was hitting her that this was her home now.

“As if this dorm isn’t awesome enough, it also happens to be adjacent to Orchard Hall,” I said. Goose bumps ran up and down my arms, but they weren’t from the cold.

Inside my dorm hall, I shook off shivers and stopped when we reached Christina’s door.

“This is Christina’s office,” I explained. “She’s our dorm monitor. Looks like she’s gone right now, but I know you’ll like Christina once you get to meet her.”

“She sent me a few welcome e-mails,” Brielle said. “It’s so weird to be living without my parents. That part hasn’t hit me yet.”

“Oh, it will,” I said as we made our way down Hawthorne’s hall. “You’ll miss them a lot, but being on your own is pretty cool. Except the stuff like laundry!”

Brielle and I walked into the common room, kicked off our shoes, and plunked down on the couch, facing each other.

“I almost texted all my friends, but I want some alone time with you first,” I said. “Then we’ll tell Khloe, and Clare, and everyone.”

Brielle’s brown eyes were wide. “Hopefully, they’ll be as happy as you are that I’m staying.”

“Of course they will be,” I said. “They barely had five seconds with you, but I could tell they loved you.”

Today had been the definition of insanity. Parents who had decided to go out on their own had wandered around with lost looks on their faces. Some had reminded me of what my mom and dad had taught me to do when I was little. The parents had sat on a bench, not moving, just waiting for their kid to find them. It was like I’d been taught—stay where you are and Mom and Dad will find you.

I’d barely seen any of my friends today, and we’d all had a lot less time together than we’d planned. It seemed like parents took over as priority, and everyone had a different way of handling their family.

I stood, unzipped my coat, and tossed it onto a nearby recliner. I was happy that the common room was empty. Brielle and I could openly talk in private.

“There’s my LT!” Brielle said. “I’d love a cup of whatever you’re having.”

With a smile, I made us both one of my fall favorites—apple spice.

“Okay,” I said. I pulled an orange throw blanket over my legs and raised my mug to my lips. “Start at the beginning and tell me everything.”