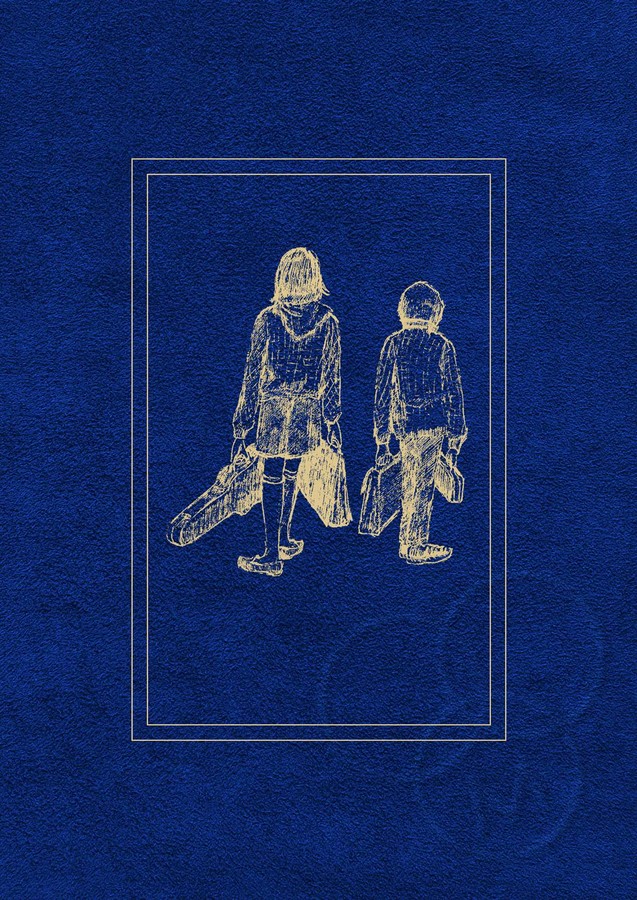 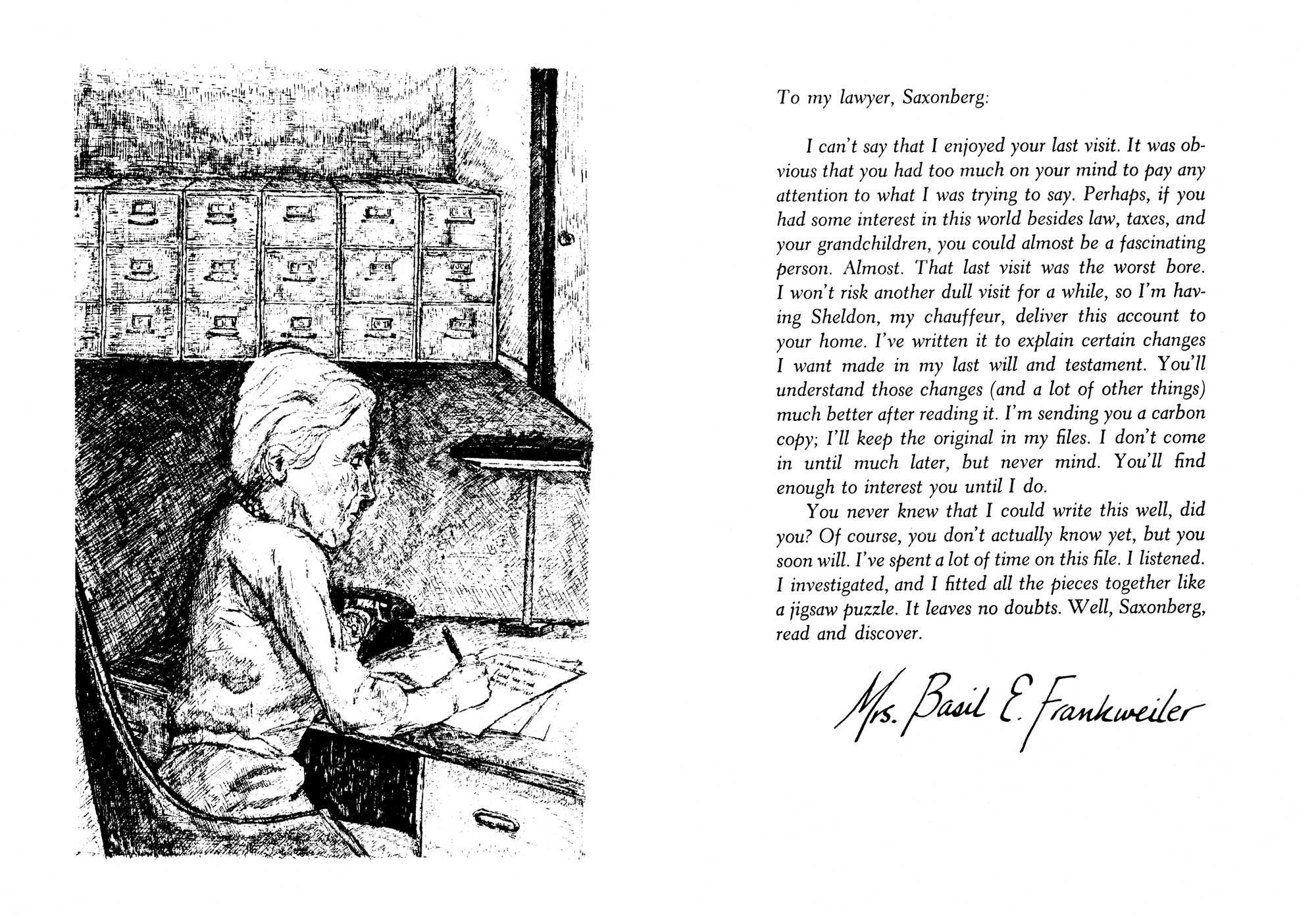 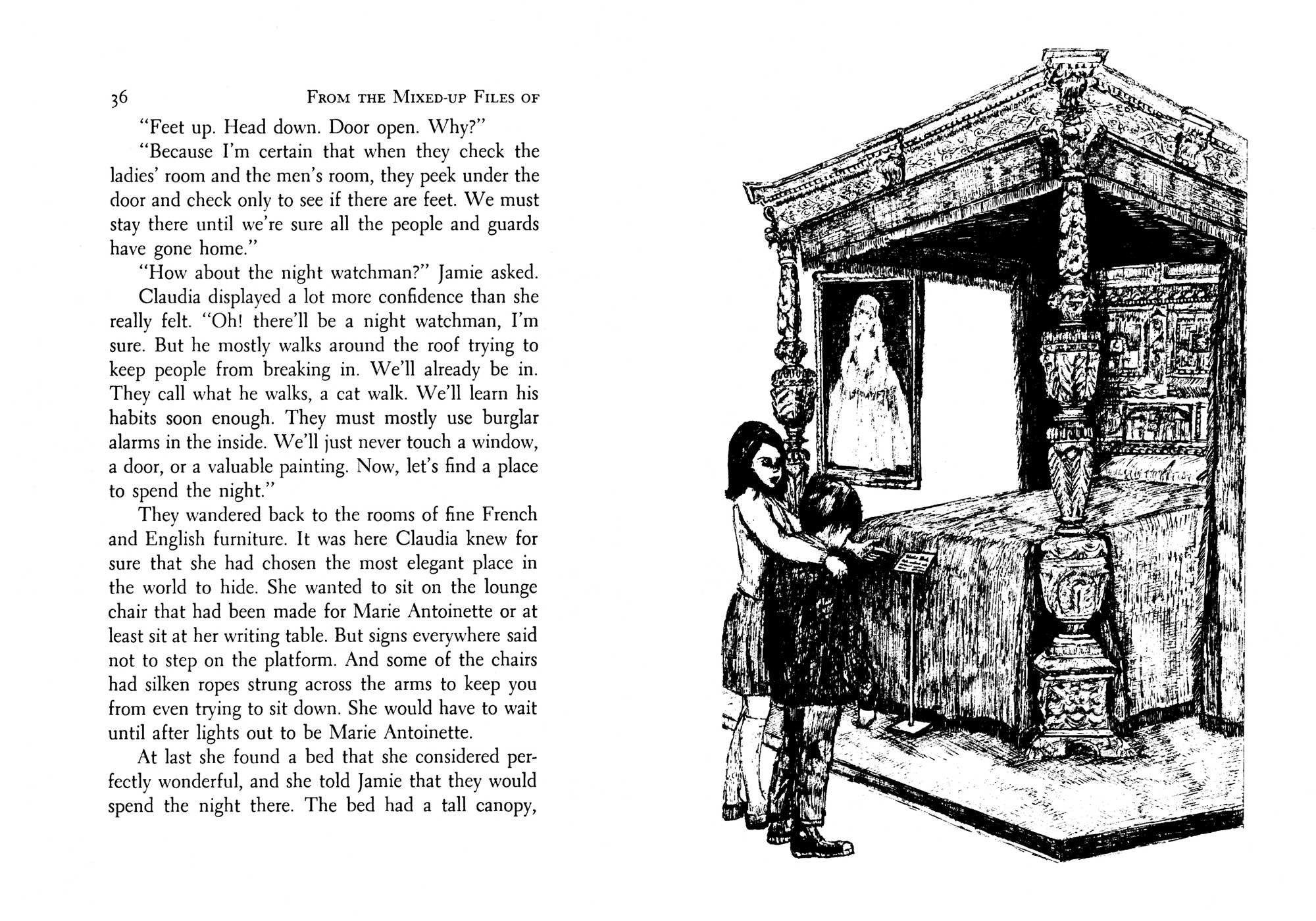 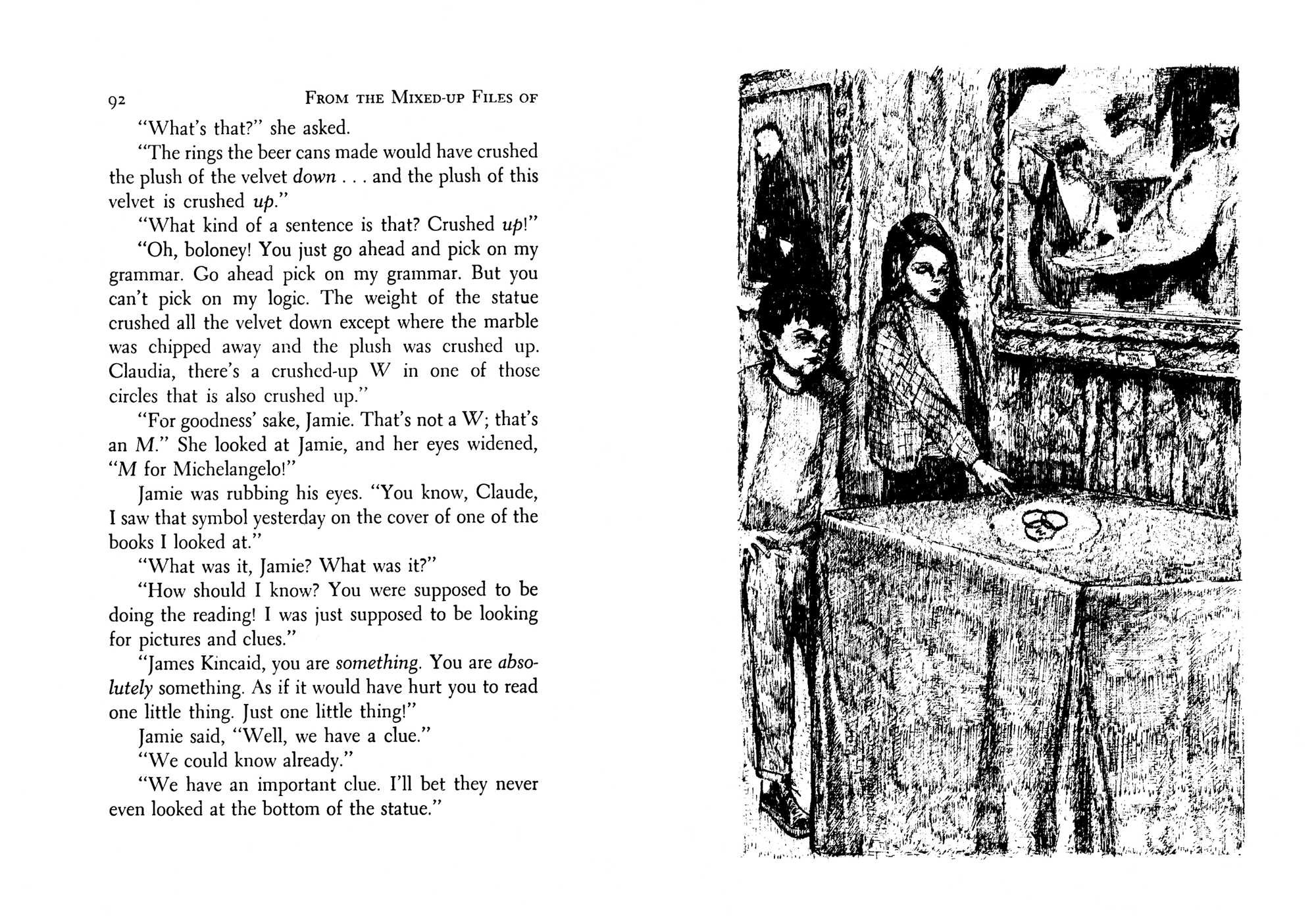 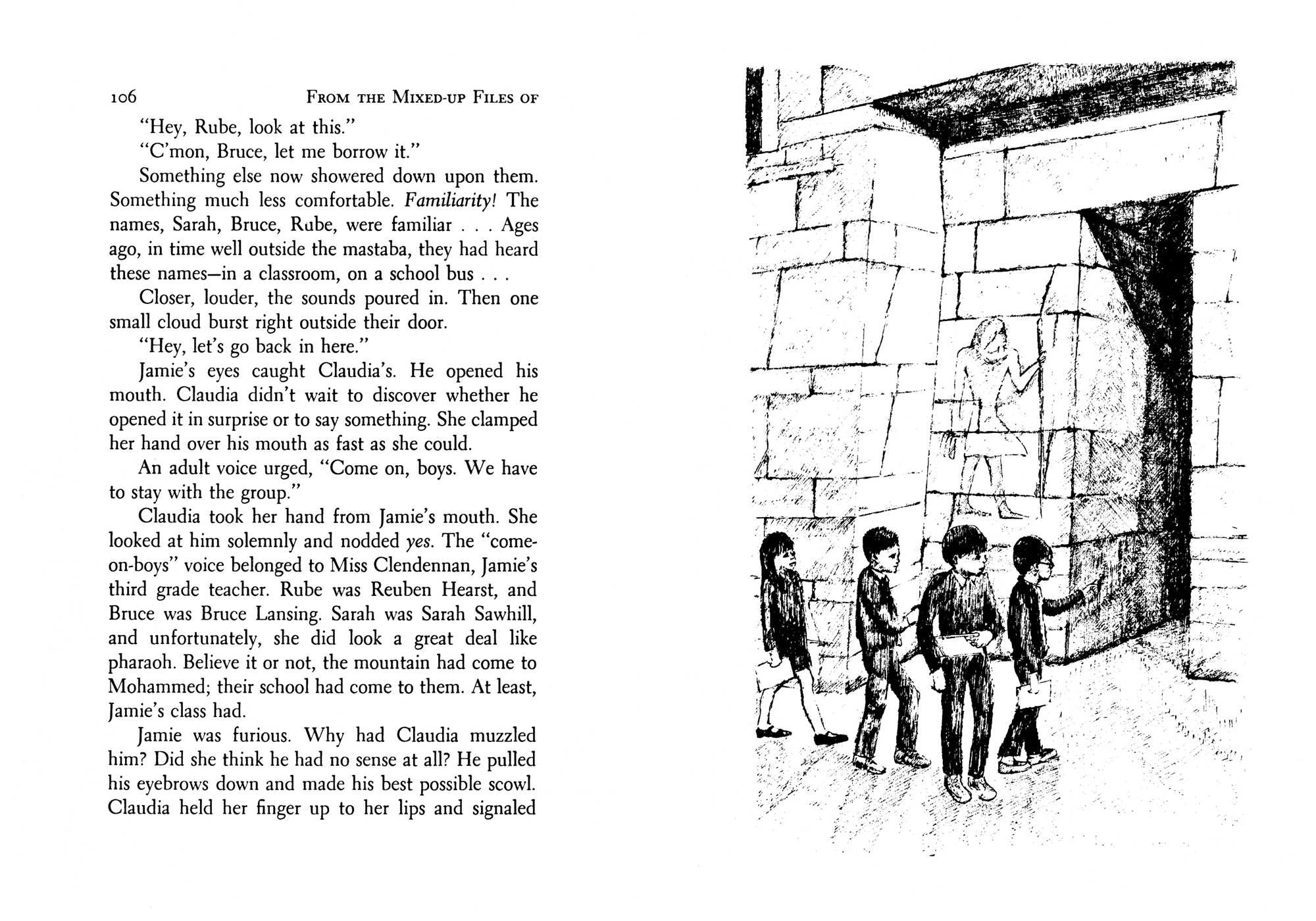 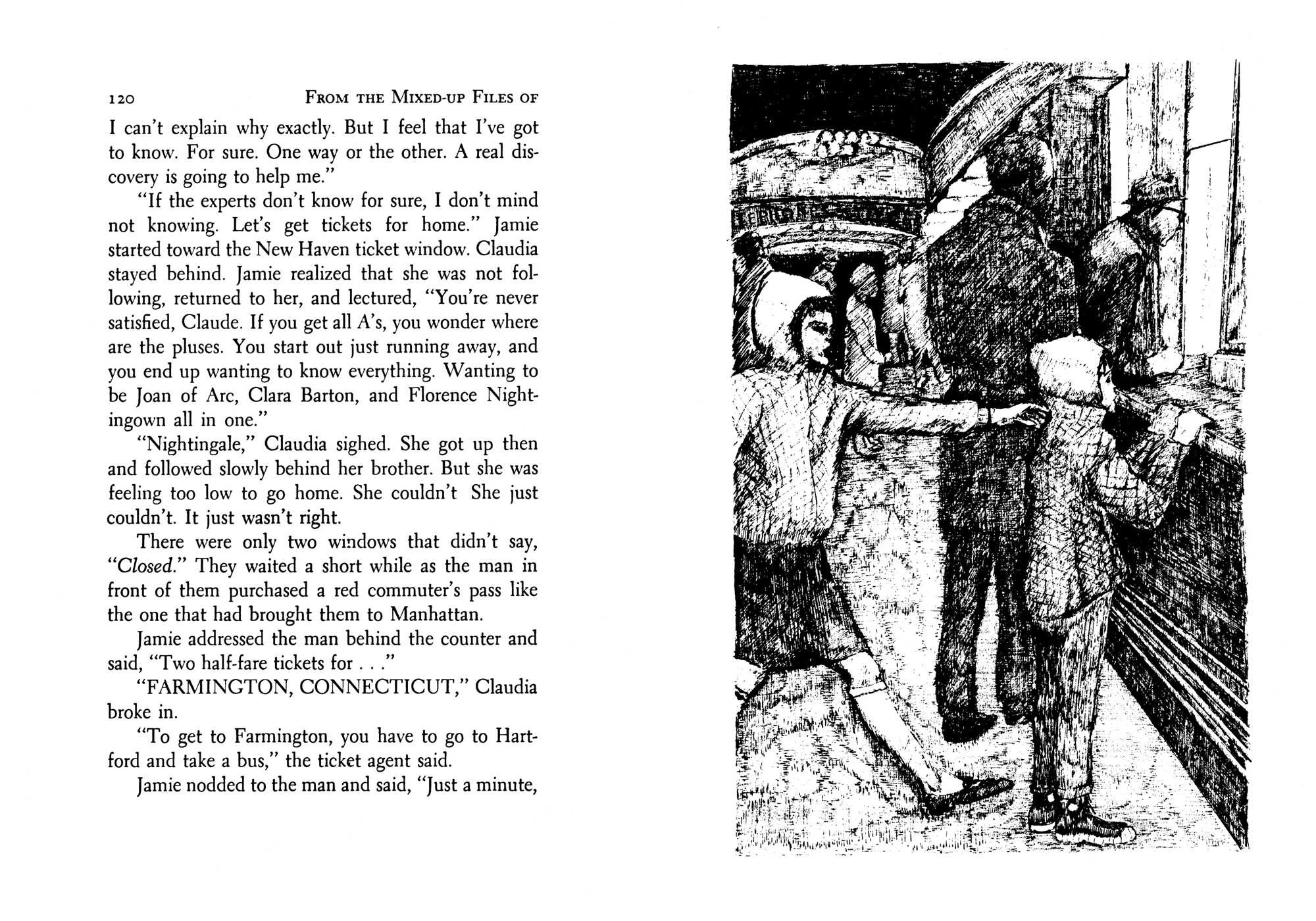 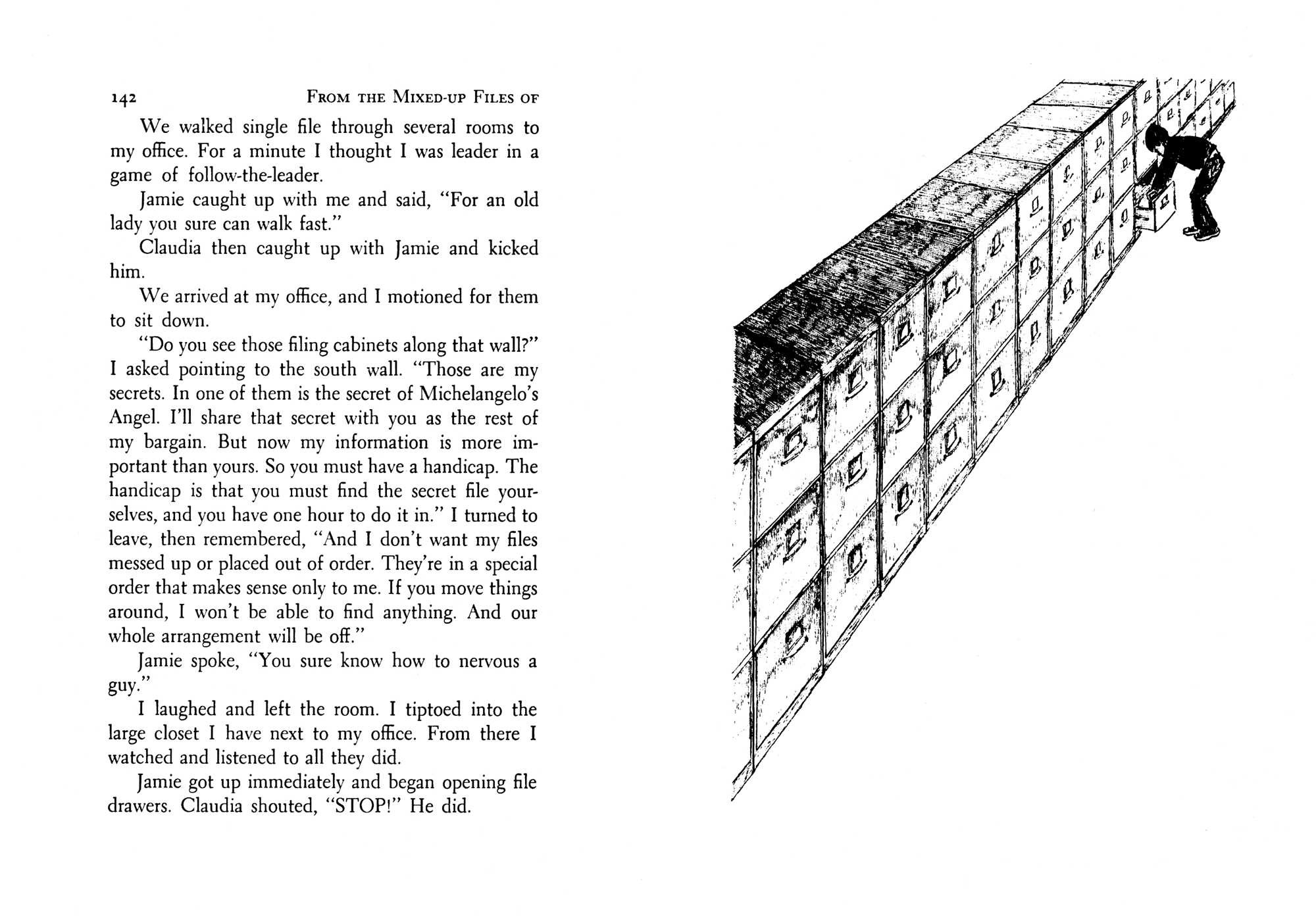 From the Mixed-Up Files of Mrs. Basil E. Frankweiler

Run away to the Metropolitan Museum of Art with E. L. Konigsburg’s beloved classic and Newbery Medal­–winning novel From the Mixed-Up Files of Mrs. Basil E. Frankweiler—now available in a deluxe keepsake edition!

Claudia knew that she could never pull off the old-fashioned kind of running away…so she decided to run not from somewhere but to somewhere. That was how Claudia and her brother, Jamie, ended up living in the Metropolitan Museum of Art—and right in the middle of a mystery that made headlines. Celebrate the legacy of the Newbery Medal–winning classic with this special edition.

From the mixed-up files of Mrs. Basil E. Frankweiler 1
CLAUDIA KNEW THAT SHE COULD NEVER PULL OFF the old-fashioned kind of running away. That is, running away in the heat of anger with a knapsack on her back. She didn’t like discomfort; even picnics were untidy and inconvenient: all those insects and the sun melting the icing on the cupcakes. Therefore, she decided that her leaving home would not be just running from somewhere but would be running to somewhere. To a large place, a comfortable place, an indoor place, and preferably a beautiful place. And that’s why she decided upon the Metropolitan Museum of Art in New York City.

She planned very carefully; she saved her allowance and she chose her companion. She chose Jamie, the second youngest of her three younger brothers. He could be counted on to be quiet, and now and then he was good for a laugh. Besides, he was rich; unlike most boys his age, he had never even begun collecting baseball cards. He saved almost every penny he got.

But Claudia waited to tell Jamie that she had decided upon him. She couldn’t count on him to be that quiet for that long. And she calculated needing that long to save her weekly allowances. It seemed senseless to run away without money. Living in the suburbs had taught her that everything costs.

She had to save enough for train fare and a few expenses before she could tell Jamie or make final plans. In the meantime she almost forgot why she was running away. But not entirely. Claudia knew that it had to do with injustice. She was the oldest child and the only girl and was subject to a lot of injustice. Perhaps it was because she had to both empty the dishwasher and set the table on the same night while her brothers got out of everything. And, perhaps, there was another reason more clear to me than to Claudia. A reason that had to do with the sameness of each and every week. She was bored with simply being straight-A’s Claudia Kincaid. She was tired of arguing about whose turn it was to choose the Sunday night seven-thirty television show, of injustice, and of the monotony of everything.

The fact that her allowance was so small that it took her more than three weeks of skipping hot fudge sundaes to save enough for train fare was another example of injustice. (Since you always drive to the city, Saxonberg, you probably don’t know the cost of train fare. I’ll tell you. Full fare one way costs one dollar and sixty cents. Claudia and Jamie could each travel for half of that since she was one month under twelve, and Jamie was well under twelve—being only nine.) Since she intended to return home after everyone had learned a lesson in Claudia appreciation, she had to save money for her return trip, too, which was like full fare one way. Claudia knew that hundreds of people who lived in her town worked in offices in New York City and could afford to pay full fare both ways every day. Like her father. After all, Greenwich was considered an actual suburb of New York, a commuting suburb.

Even though Claudia knew that New York City was not far away, certainly not far enough to go considering the size and number of the injustices done to her, she knew that it was a good place to get lost. Her mother’s Mah-Jong club ladies called it the city. Most of them never ventured there; it was exhausting, and it made them nervous. When she was in the fourth grade, her class had gone on a trip to visit historical places in Manhattan. Johnathan Richter’s mother hadn’t let him go for fear he’d get separated from the group in all the jostling that goes on in New York. Mrs. Richter, who was something of a character, had said that she was certain that he would “come home lost.” And she considered the air very bad for him to breathe.

Claudia loved the city because it was elegant; it was important; and busy. The best place in the world to hide. She studied maps and the Tourguide book of the American Automobile Association and reviewed every field trip her class had ever taken. She made a specialized geography course for herself. There were even some pamphlets about the museum around the house, which she quietly researched.

Claudia also decided that she must get accustomed to giving up things. Learning to do without hot fudge sundaes was good practice for her. She made do with the Good Humor bars her mother always kept in their freezer. Normally, Claudia’s hot fudge expenses were forty cents per week. Before her decision to run away, deciding what to do with the ten cents left over from her allowance had been the biggest adventure she had had each week. Sometimes she didn’t even have ten cents, for she lost a nickel every time she broke one of the household rules like forgetting to make her bed in the morning. She was certain that her allowance was the smallest in her class. And most of the other sixth graders never lost part of their pay since they had full-time maids to do the chores instead of a cleaning lady only twice a week. Once after she had started saving, the drug store had a special. HOT FUDGE, 27¢, the sign in the window said. She bought one. It would postpone her running away only twenty-seven cents worth. Besides, once she made up her mind to go, she enjoyed the planning almost as much as she enjoyed spending money. Planning long and well was one of her special talents.

Jamie, the chosen brother, didn’t even care for hot fudge sundaes although he could have bought one at least every other week. A year and a half before, Jamie had made a big purchase; he had spent his birthday money and part of his Christmas money on a transistor radio, made in Japan, purchased from Woolworth’s. Occasionally, he bought a battery for it. They would probably need the radio; that made another good reason for choosing Jamie.

On Saturdays Claudia emptied the wastebaskets, a task she despised. There were so many of them. Everyone in her family had his own bedroom and waste-basket except her mother and father who shared both—with each other. Almost every Saturday Steve emptied his pencil sharpener into his. She knew he made his basket messy on purpose.

One Saturday as she was carrying the basket from her parents’ room, she jiggled it a little so that the contents would sift down and not spill out as she walked. Their basket was always so full since there were two of them using it. She managed to shift a shallow layer of Kleenex, which her mother had used for blotting lipstick, and thus exposed the corner of a red ticket. Using the tips of her forefinger and thumb like a pair of forceps, she pulled at it and discovered a ten-ride pass for the New York, New Haven, and Hartford Railroad. Used train passes normally do not appear in suburban wastebaskets; they appear in the pockets of train conductors. Nine rides on a pass are marked off in little squares along the bottom edge, and they are punched one at a time as they are used; for the tenth ride the conductor collects the pass. Their cleaning lady who had come on Friday must have thought that the pass was all used up since rides one through nine were already punched. The cleaning lady never went to New York, and Claudia’s dad never kept close track of his pocket change or his train passes.

Both she and Jamie could travel on the leftover pass since two half fares equal one whole. Now they could board the train without having to purchase tickets. They would avoid the station master and any stupid questions he might ask. What a find! From a litter of lipstick kisses, Claudia had plucked a free ride. She regarded it as an invitation. They would leave on Wednesday.

On Monday afternoon Claudia told Jamie at the school bus stop that she wanted him to sit with her because she had something important to tell him. Usually, the four Kincaid children neither waited for each other nor walked together, except for Kevin, who was somebody’s charge each week. School had begun on the Wednesday after Labor Day. Therefore, their “fiscal week” as Claudia chose to call it began always on Wednesday. Kevin was only six and in the first grade and was made much over by everyone, especially by Mrs. Kincaid, Claudia thought. Claudia also thought that he was terribly babied and impossibly spoiled. You would think that her parents would know something about raising children by the time Kevin, their fourth, came along. But her parents hadn’t learned. She couldn’t remember being anyone’s charge when she was in the first grade. Her mother had simply met her at the bus stop every day.

Jamie wanted to sit with his buddy, Bruce. They played cards on the bus; each day meant a continuation of the day before. (The game was nothing very complicated, Saxonberg. Nothing terribly refined. They played war, that simple game where each player puts down a card, and the higher card takes both. If the cards are the same, there is a war which involves putting down more cards; winner then takes all the war cards.) Every night when Bruce got off at his stop, he’d take his stack of cards home with him. Jamie would do the same. They always took a vow not to shuffle. At the stop before Bruce’s house, they would stop playing, wrap a rubber band around each pile, hold the stack under each other’s chin and spit on each other’s deck saying, “Thou shalt not shuffle.” Then each tapped his deck and put it in his pocket.

Claudia found the whole procedure disgusting, so she suffered no feelings of guilt when she pulled Jamie away from his precious game. Jamie was mad, though. He was in no mood to listen to Claudia. He sat slumped in his seat with his lips pooched out and his eyebrows pulled down on top of his eyes. He looked like a miniature, clean-shaven Neanderthal man. Claudia didn’t say anything. She waited for him to cool off.

From the Mixed-Up Files of Mrs. Basil E. Frankweiler