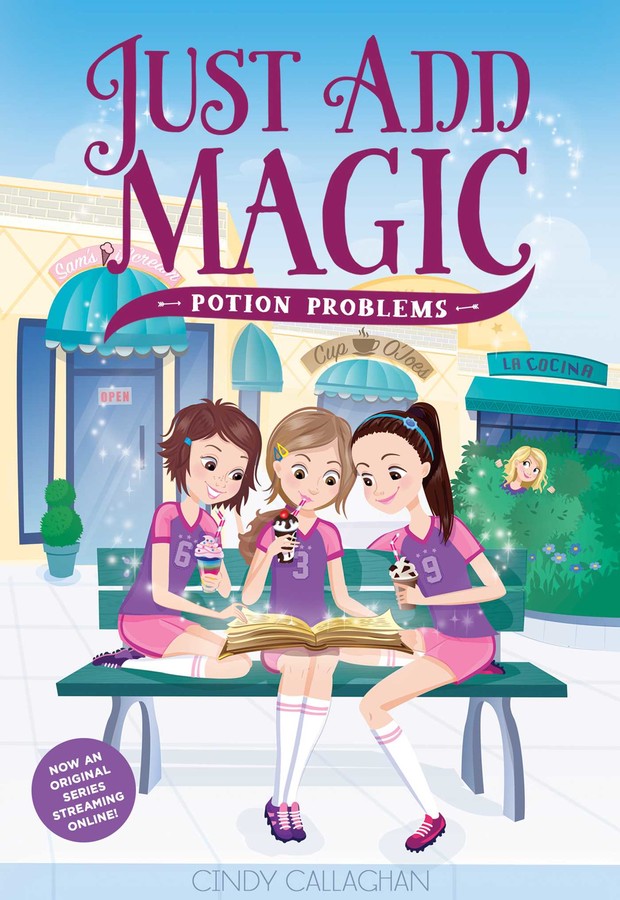 Kelly Quinn and her friends must figure out a way to save a beloved local store and find their infamous Secret Recipe Book, which has gone missing in this sequel to Just Add Magic (the inspiration for the family-friendly TV series)!

Kelly Quinn and her best friends, Darbie and Hannah, are having the worst day ever! Their Secret Recipe Book accidentally gets included in frenemy, Charlotte’s used book drive. Not good.
As if that’s not enough, the girls find out that their cooking program is on the chopping block at school, thanks to big budget cuts.

Kelly & Company decide to take matters into their own hands and apply for famous TV chef Felice Foudini’s Recipe Challenge. The prize? $10,000 and webisodes on Felice’s site. With the Book and the special ingredients from their beloved mentor, Senora Perez’s, store LaCucina, the girls are sure to win.

But when they turn to Senora Perez, for help, they discover La Cucina is in danger of closing!

Then Kelly gets a mysterious delivery—a package with the missing Secret Recipe Book with a note: “From KE.” KE is one of the Book’s authors, but who is KE exactly?

It’s up to Kelly, Darbie, and Hannah to get to the bottom of the mystery, save the cooking program, and help Senora P. keep her store!

Potion Problems 1 It All Starts with a Problemo
Question: Why was I, Kelly Quinn, jumping on the bed late at night, over and over again? Was it: Exercise? A relaxation technique? A way to digest my dinner?

Answer: None of the above.

There was a very special book—a Secret Recipe Book—that I kept hidden in the tiles above my bed. And the only way to access it was this jumping situation.

I jumped again and reached into the ceiling for the Secret Recipe Book like I had so many times before.

Except this time, it wasn’t there.

I texted my besties, Hannah Hernandez and Darbie O’Brien immediately.

Do either of you have it?

It? Darbie texted back, followed immediately after by, The pox? Before I could reply, she added, Small Pox or Chicken Pox? I was almost ready to send my response when a third text came in from her: Doesn’t matter. I don’t have either.

Hannah wrote, The Book, Darb. You took it home with you last night.

Right where? I wrote. At this point I was sweating. This was no ordinary book.

A few weeks ago, on the last day of summer vacation, Darbie and Hannah and I found the Secret Recipe Book hidden in my attic.

Who am I? Kelly Quinn, seventh grader, average/mediocre soccer player, and lover of all things cooking.

What’s the Secret Recipe Book? It’s a bunch of handwritten recipes taped within the pages of an old World Book Encyclopedia, Volume T. With the Book, we formed a secret cooking club and made the recipes, which called for some pretty unusual ingredients that we could only get from one local store: La Cocina.

Weird things happened to the people who ate the food (a.k.a. potions), and also to us. Seems that potioning someone comes with a price, like a payback. It’s called the Law of Returns. So any time we make a potion, the person who adds the special ingredient gets a Return, which is bad luck.

Problemos with the Secret Recipe Book were not good.