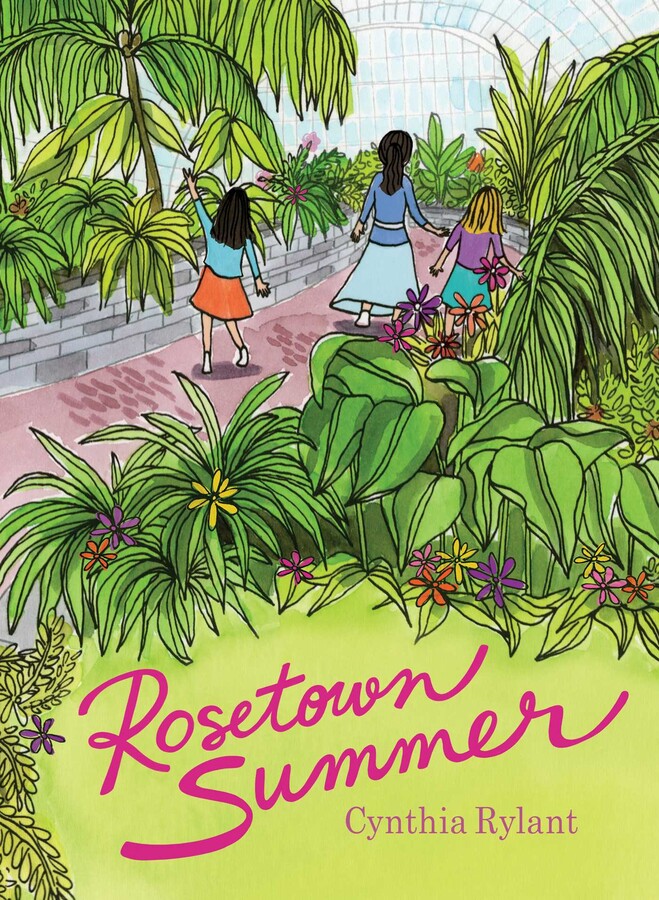 Part of The Rosetown Books
By Cynthia Rylant
LIST PRICE $16.99

It is August in Rosetown, Indiana.

Ten-year-old Flora is having a calm and busy summer filled with old friends and new projects, dear pets, and, of course, many hours at her favorite place: Wings and a Chair Used Books. It is her constant and her comfort.

But change may be ahead for Wings and a Chair, and Flora is uneasy about what it will bring.

Chapter 1 1
Rosetown Paper and Press sat on Main Street in Rosetown, Indiana, and it was one of Flora Smallwood’s favorite places to be. The shop belonged to Flora’s mother and father, and all of its beautiful cards and calendars and journals had been printed on an old-fashioned letterpress in the back room. It was comforting to be among all of the lovely messages: A garden of wishes for you. You are my cup of tea. To my very dearest dear. And to trace a finger over the little birds, the garlands of ivy, the blue forget-me-nots and other pretty decorations on the papers.

The shop was new—it had been open only for a month—but as one might say of a special friend, it seemed to Flora that she had known it forever.

August in Indiana always had a stillness that Flora appreciated, as she was herself a mostly still person. She was sure this was why her cat, Serenity, loved her so much. Cats enjoy quiet people. And Serenity had been a stray cat when Flora and her friend Yury had found her. Serenity had been through enough challenges in her kitty life and now wanted nothing more than to be with a gentle person who did not fidget. Flora fit this description perfectly.

When the school year had ended in June, Flora and her friends Nessy and Yury had all launched immediately into their summer projects, and those projects were continuing with great success.

Yury and his dog, Friday, were now in the Beginner class at the Good Manners for Good Dogs dog school, having passed puppy class to great applause (Flora’s). After dog school on Saturday mornings, Yury and Flora still sat on the bench outside the Peaceable Buns Bakery, sharing muffins and talking, as Friday chewed on leftover crusts provided by the friendly bakers. Beginner class was more rigorous than puppy school, and Yury always had much to say about the morning’s class. (“Friday sat fine, but Skippy behind us kept rolling over.”)

Nessy, who at nine was a year younger than Flora, was continuing the piano lessons she and Flora had started many months before. Nessy was a natural musician (unlike Flora, who was happy to play old folk songs forever while Nessy dove into Mozart), and with the windows of her home wide open for the summer, Nessy’s playing was enjoyed by her neighbors, all of whom agreed she had “a remarkable talent.” Nessy didn’t care about talent, though. She just wanted to play piano while her little canary, Sunny, sang along. And when Nessy wasn’t practicing the piano, she was practicing riding a pink bicycle with white streamers and a bell and a basket, in which she always carried her doll Happy Girl. Nessy was cautious about this new bicycle—it had taken much encouragement from Flora for Nessy to even think about riding a bicycle—but with the help of Happy Girl, Nessy was doing fine.

And Flora was still assisting her parents at the paper shop, though not nearly as energetically as in June and July. In June they had received the keys to the empty storefront on Main Street, and for the first week they cleaned, the second week they painted, the third week they carried in furniture and equipment (Flora’s job that week had been to bring lunch), and the final week her parents finally printed their first products to sell to the public. The letterpress was louder than Flora had expected, so she stayed at home with Serenity and read during the hours of printing. But in the late afternoon, after the noise had stopped, she took Serenity to the upper floor of the shop so they could sit on the wicker daybed by the window and watch the pigeons.

July had been something of a whirlwind, with the shop open part-time and her parents adjusting their schedules. (Flora’s father was still a full-time photographer for the Rosetown Chronicle.) Flora was especially busy with errands that month, and she’d made quite a few trips to the Peaceable Buns Bakery on everyone’s behalf.

These had been hectic months, so they passed quickly, but—besides the new paper shop—there hadn’t been much real change in Rosetown.

But now, with only a month to go before school would start, there was talk of another change, the subject of which Flora found deeply concerning. It involved her dearest place, the special destination she had shared with her friend Yury so many school-day afternoons: Wings and a Chair Used Books. It was at this shop that Flora and Yury’s friendship had planted its roots and where a purple velveteen chair in the front window always beckoned them in.

The bookshop’s owner, Miss Meriwether, had been invited by a friend to come live together on a farm in Montana in the Bitterroot Valley. And she was considering it. This was all that Flora knew.

And she wondered: If Wings and a Chair changed, what else might?

Part of The Rosetown Books
By Cynthia Rylant
LIST PRICE $16.99

More books in this series: The Rosetown Books