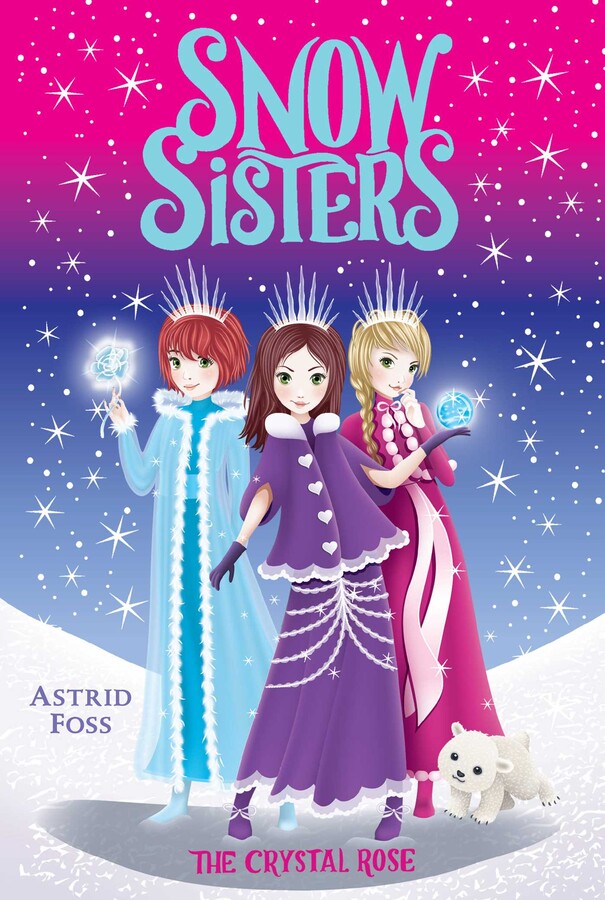 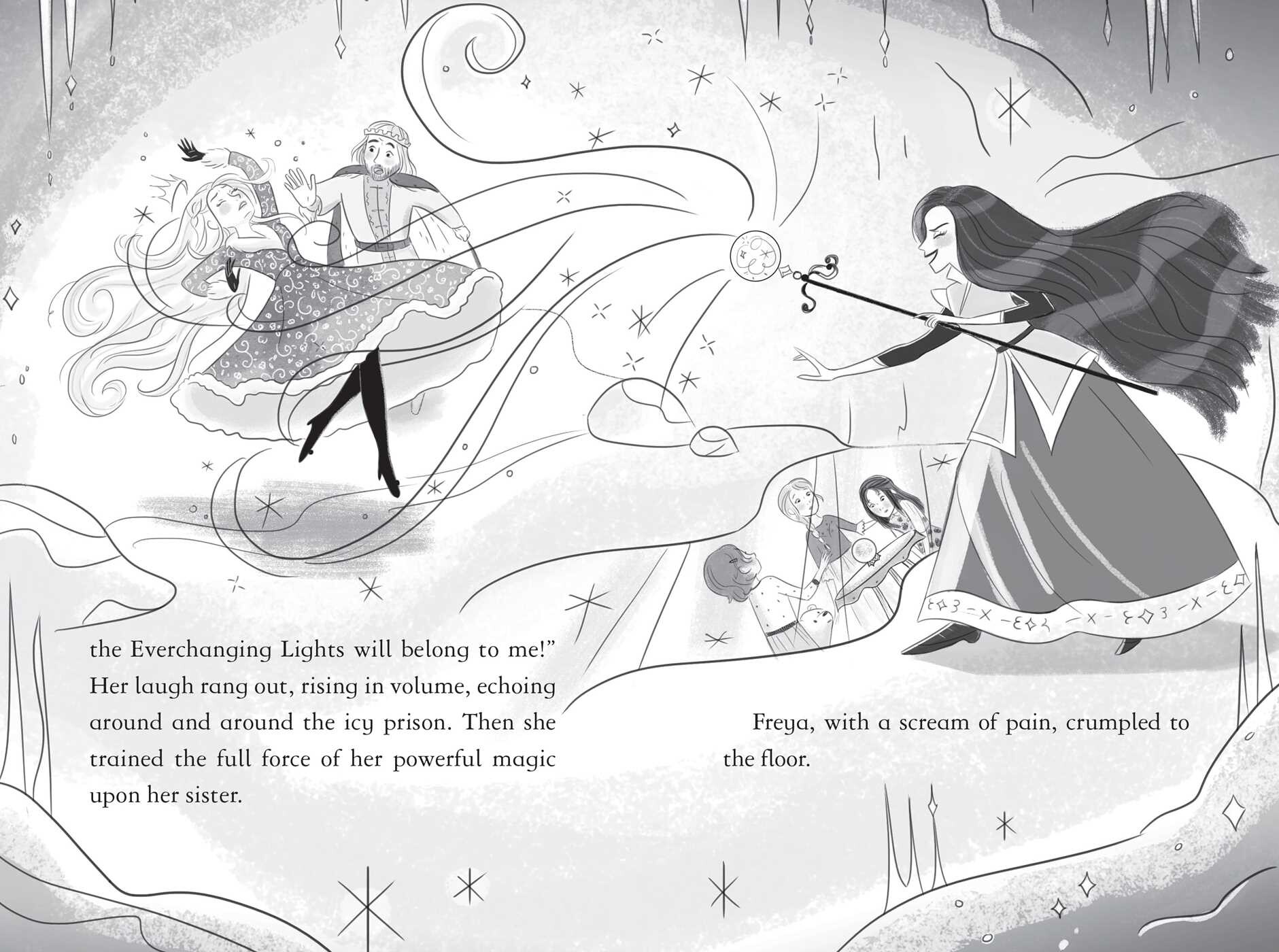 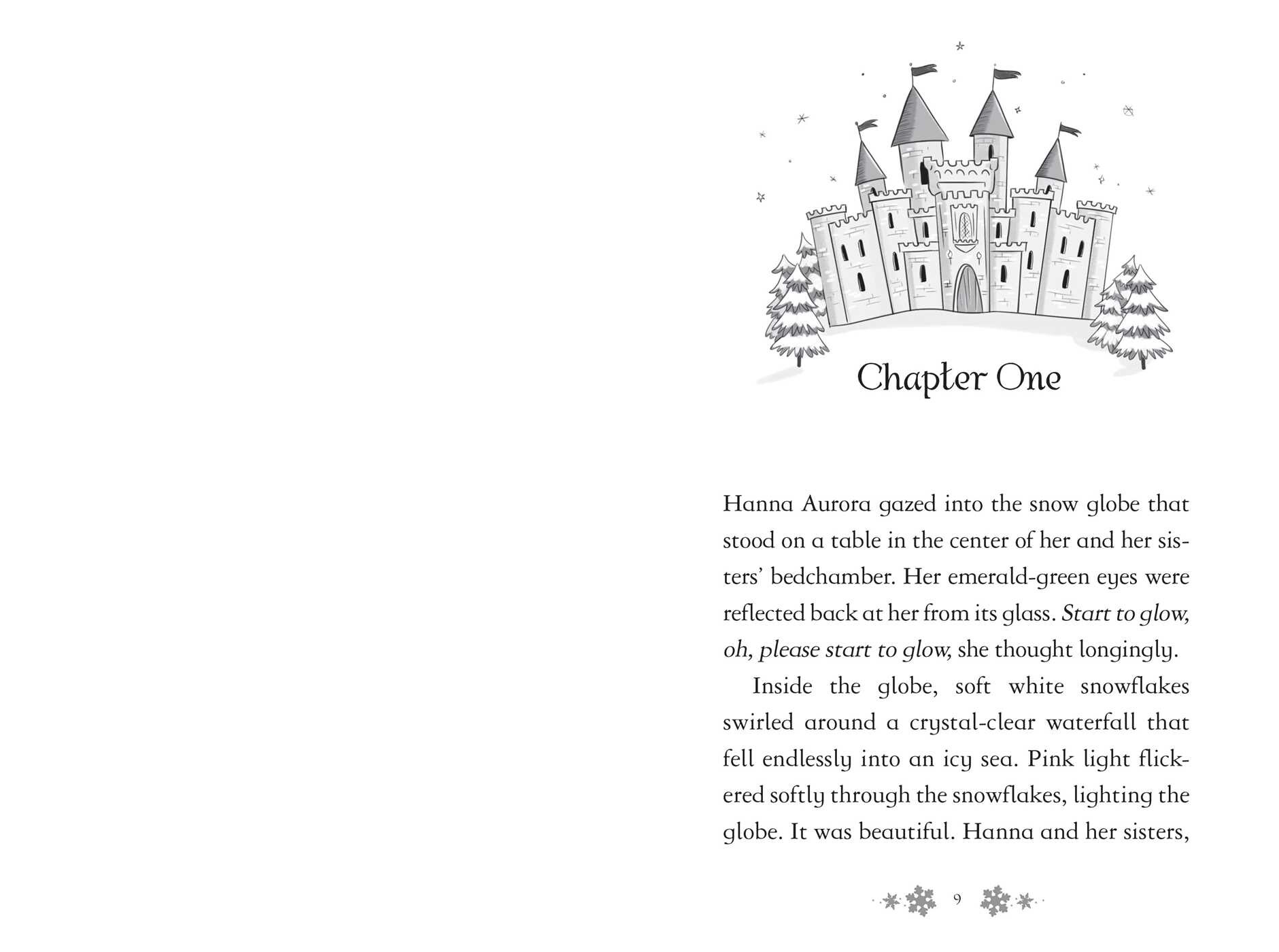 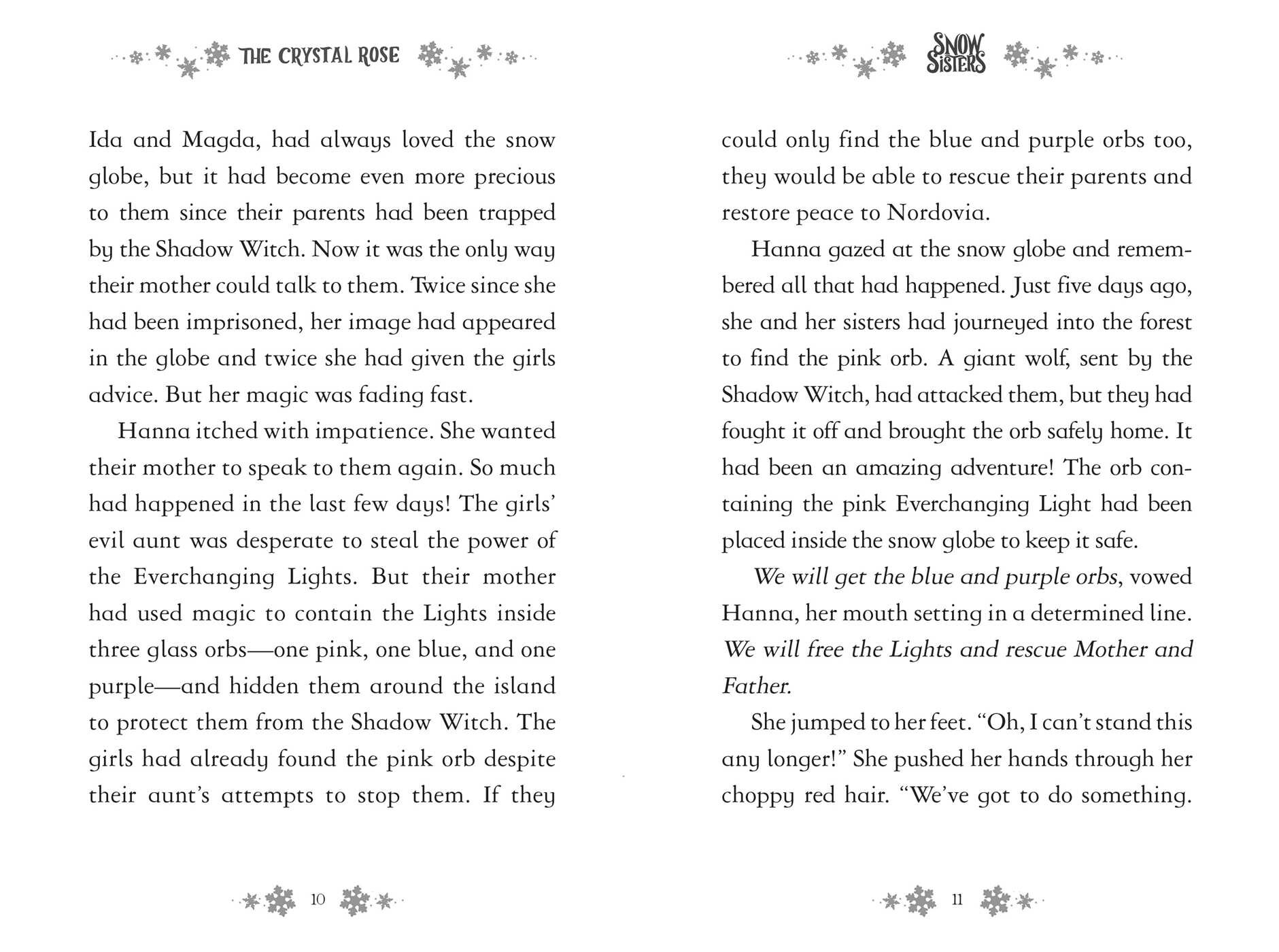 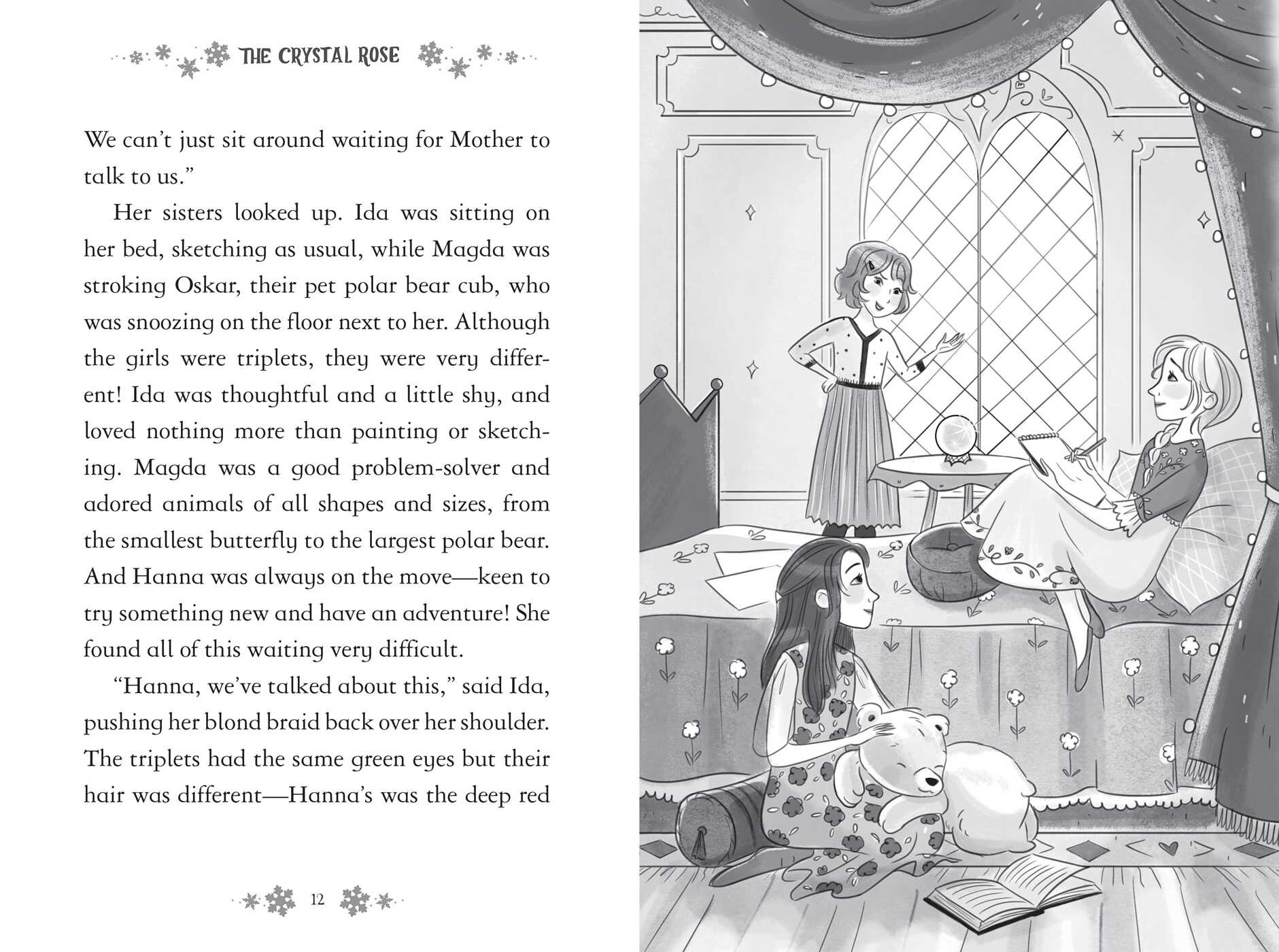 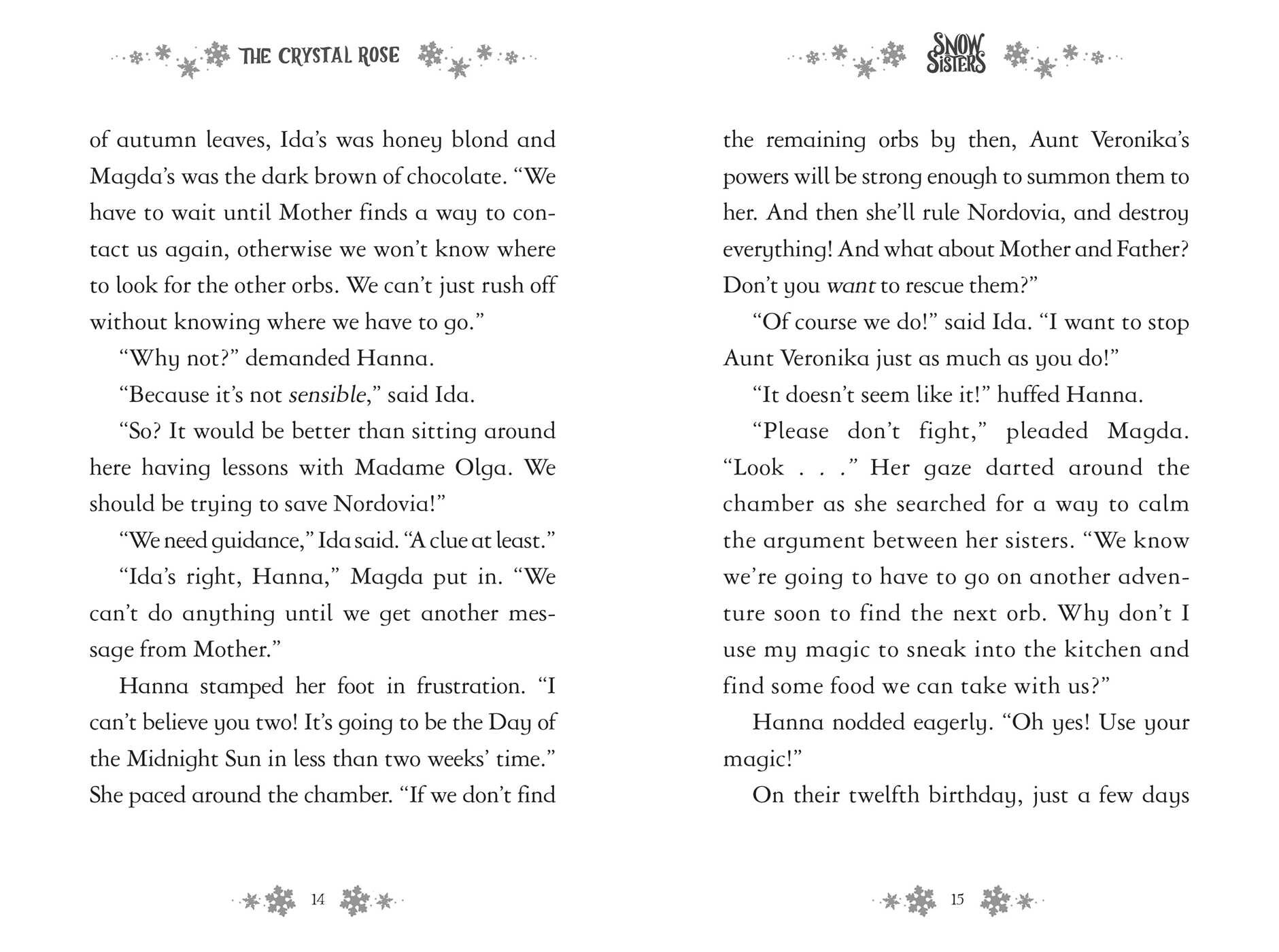 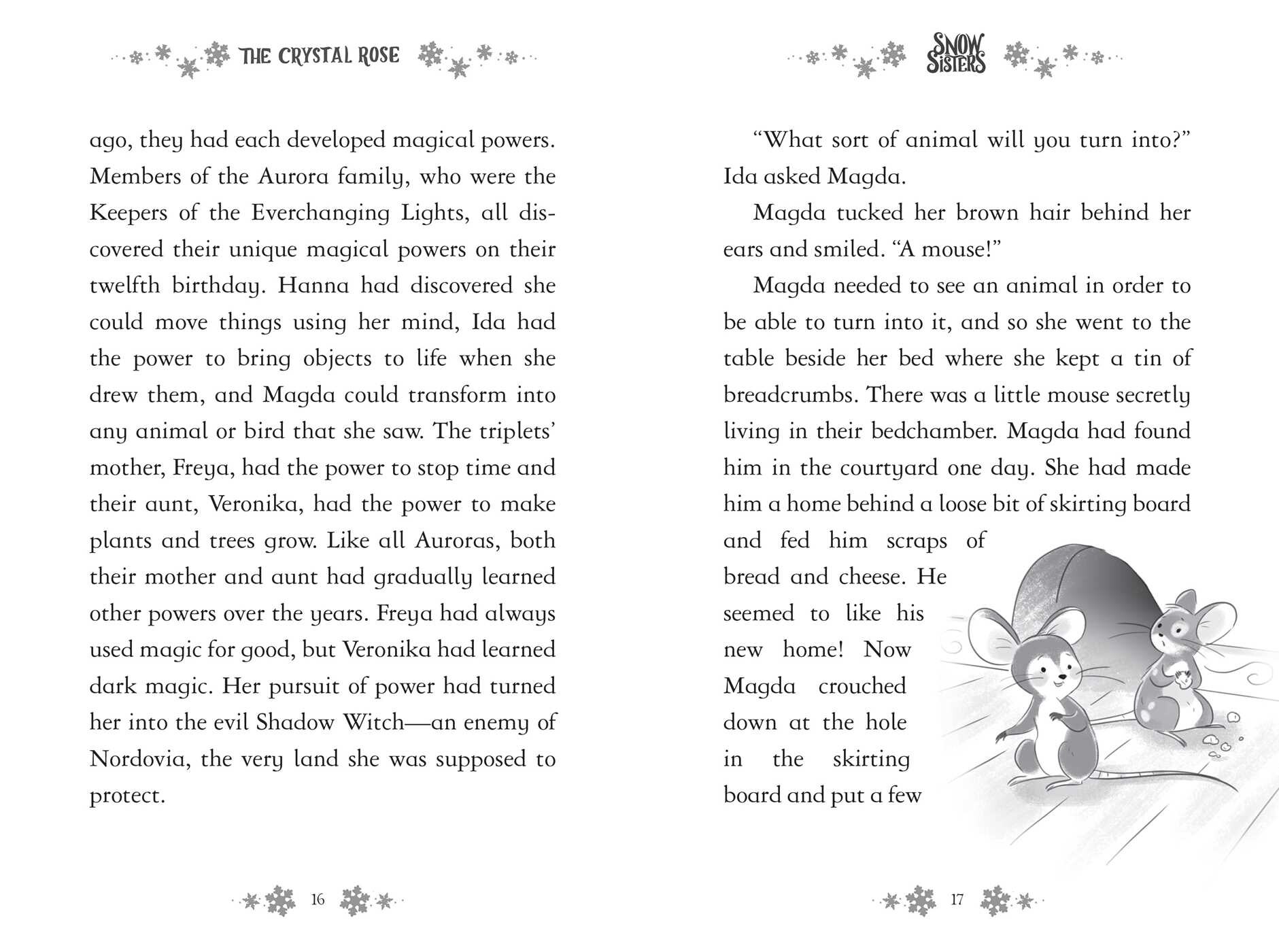 The Snow Sisters’ quest to save the Everchanging Lights continues in this magical chapter book perfect for fans of Disney’s Frozen and of Snow and Rose!

The Snow Sisters have bested the evil Shadow Witch once before, but the fight to keep their kingdom from plunging into darkness is far from over. On their second quest, the princesses face a dark, icy journey to find the blue Everchanging Light and the enchanted crystal rose. Will their magic be strong enough to overcome the Great Glacier and all the dangers hidden there?

Chapter One
Hanna Aurora gazed into the snow globe that stood on a table in the center of her and her sisters’ bedchamber. Her emerald-green eyes were reflected back at her from its glass. Start to glow, oh, please start to glow, she thought longingly.

Inside the globe, soft white snowflakes swirled around a crystal-clear waterfall that fell endlessly into an icy sea. Pink light flickered softly through the snowflakes, lighting the globe. It was beautiful. Hanna and her sisters, Ida and Magda, had always loved the snow globe, but it had become even more precious to them since their parents had been trapped by the Shadow Witch. Now it was the only way their mother could talk to them. Twice since she had been imprisoned, her image had appeared in the globe and twice she had given the girls advice. But her magic was fading fast.

Hanna itched with impatience. She wanted their mother to speak to them again. So much had happened in the last few days! The girls’ evil aunt was desperate to steal the power of the Everchanging Lights. But their mother had used magic to contain the Lights inside three glass orbs—one pink, one blue, and one purple—and hidden them around the island to protect them from the Shadow Witch. The girls had already found the pink orb despite their aunt’s attempts to stop them. If they could only find the blue and purple orbs too, they would be able to rescue their parents and restore peace to Nordovia.

Hanna gazed at the snow globe and remembered all that had happened. Just five days ago, she and her sisters had journeyed into the forest to find the pink orb. A giant wolf, sent by the Shadow Witch, had attacked them, but they had fought it off and brought the orb safely home. It had been an amazing adventure! The orb containing the pink Everchanging Light had been placed inside the snow globe to keep it safe.

We will get the blue and purple orbs, vowed Hanna, her mouth setting in a determined line. We will free the Lights and rescue Mother and Father.

She jumped to her feet. “Oh, I can’t stand this any longer!” She pushed her hands through her choppy red hair. “We’ve got to do something. We can’t just sit around waiting for Mother to talk to us.”

Her sisters looked up. Ida was sitting on her bed, sketching as usual, while Magda was stroking Oskar, their pet polar bear cub, who was snoozing on the floor next to her. Although the girls were triplets, they were very different! Ida was thoughtful and a little shy, and loved nothing more than painting or sketching. Magda was a good problem-solver and adored animals of all shapes and sizes, from the smallest butterfly to the largest polar bear. And Hanna was always on the move—keen to try something new and have an adventure! She found all of this waiting very difficult.

“Hanna, we’ve talked about this,” said Ida, pushing her blond braid back over her shoulder. The triplets had the same green eyes but their hair was different—Hanna’s was the deep red of autumn leaves, Ida’s was honey blond and Magda’s was the dark brown of chocolate. “We have to wait until Mother finds a way to contact us again, otherwise we won’t know where to look for the other orbs. We can’t just rush off without knowing where we have to go.”

Astrid Foss—if that’s even her real name—is very secretive. No one is sure where she lives, but it’s probably in a log cabin where she can take her huskies for a walk every morning then sit with a hot chocolate and dream up icy adventures. One thing is for sure…she loves ginger cookies and knitting complicated hats!

Monique Dong studied to become an animator, but soon realized she had a love for illustrating children’s books and has been following that dream ever since. Born in South Africa, she now lives in China with her husband and baby boy.