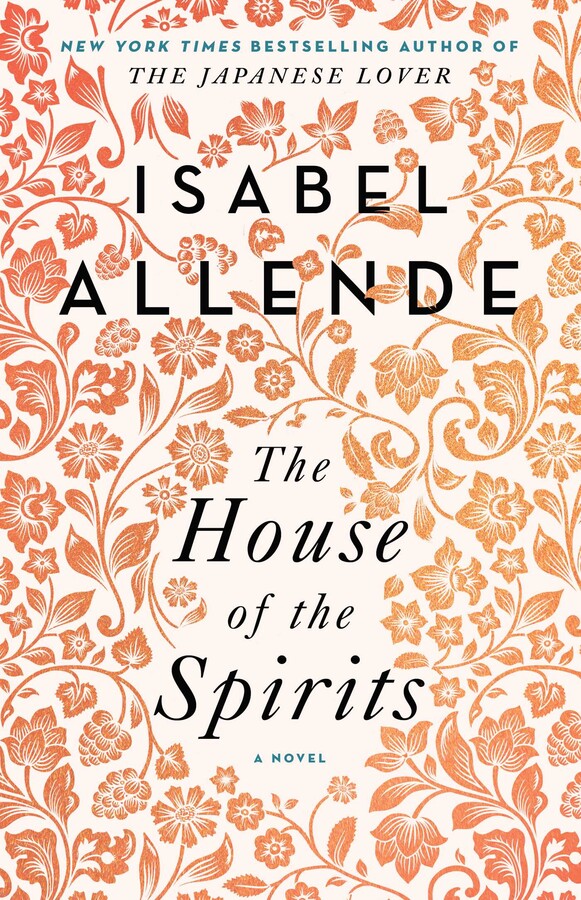 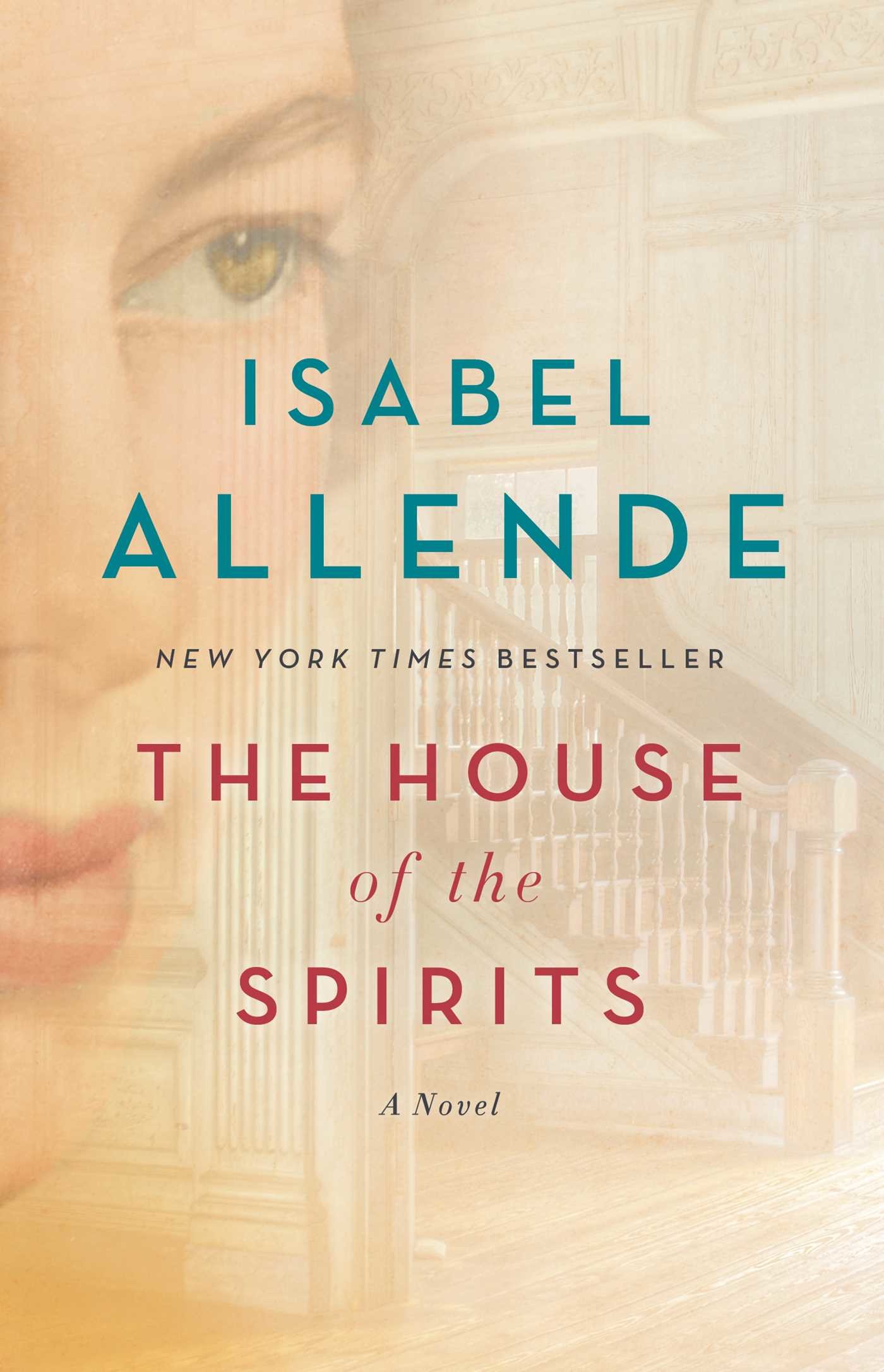 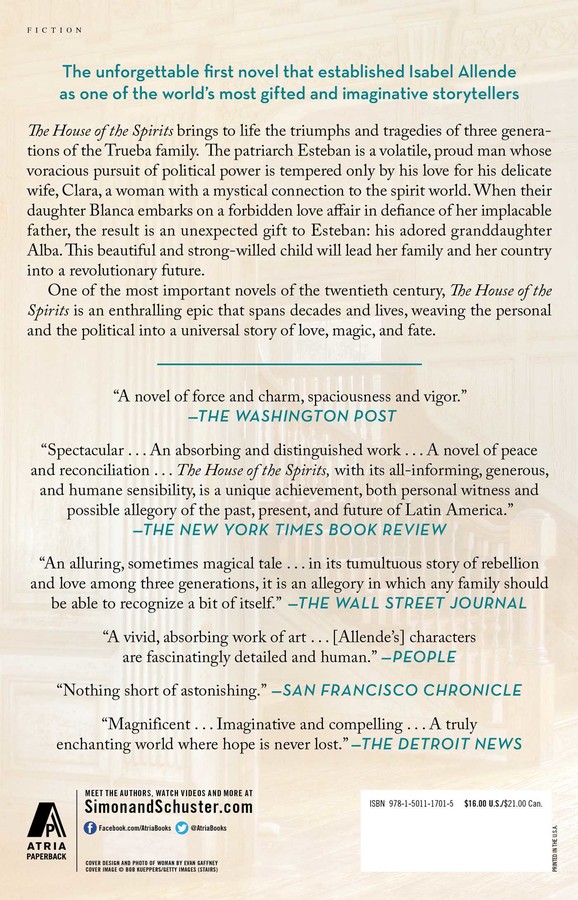 “Spectacular...An absorbing and distinguished work...The House of the Spirits with its all-informing, generous, and humane sensibility, is a unique achievement, both personal witness and possible allegory of the past, present, and future of Latin America.” —The New York Times Book Review

The House of the Spirits, the unforgettable first novel that established Isabel Allende as one of the world’s most gifted storytellers, brings to life the triumphs and tragedies of three generations of the Trueba family. The patriarch Esteban is a volatile, proud man whose voracious pursuit of political power is tempered only by his love for his delicate wife Clara, a woman with a mystical connection to the spirit world. When their daughter Blanca embarks on a forbidden love affair in defiance of her implacable father, the result is an unexpected gift to Esteban: his adored granddaughter Alba, a beautiful and strong-willed child who will lead her family and her country into a revolutionary future.

One of the most important novels of the twentieth century, The House of the Spirits is an enthralling epic that spans decades and lives, weaving the personal and the political into a universal story of love, magic, and fate. 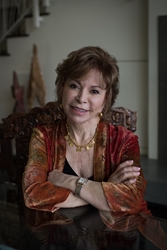 Born in Peru and raised in Chile, Isabel Allende is the author of a number of bestselling and critically acclaimed books, including The House of the Spirits, Of Love and Shadows, Eva Luna, The Stories of Eva Luna, Paula, and The Japanese Lover. Her books have been translated into more than thirty-five languages and have sold more than 65 million copies worldwide. She is the receipient of the Medal for Distinguished Contribution to American Letters, and she divides her time between California and Chile.

“Spectacular…An absorbing and distinguished work…The House of the Spirits with its all-informing, generous, and humane sensibility, is a unique achievement, both personal witness and possible allegory of the past, present, and future of Latin America.”

“Both an engrossing narrative and an impassioned testimony to the people of Chile… Allende has her own distinctive voice [with] a whimsical charm…Richly and meticulously detailed.”

“There are few trips more thrilling than those taken in the imagination of a brilliant novelist. That experience is available in The House of the Spirits … The characters, their joys and their anguish, could not be more contemporary or immediate.”

“An alluring, sometimes magical tale…In its tumultuous story of rebellion and love among three generations, it is an allegory in which any family should be able to recognize a bit of itself.”

“Nothing short of astonishing… Isabel Allende has indeed shown us the relationships between past and present, family and nation, city and country, spiritual and political values. She has done so with enormous imagination, sensitivity, and compassion.”

“Moving and powerful…Her novel captivates and holds the reader throughout…The House of the Spirits is full of marvelous and unforgettable women who add a special dimension to the book.”

“The only cause The House of the Spirits embraces is that of humanity, and it does so with such passion, humor, and wisdom that in the end it transcends politics…The result is a novel of force and charm, spaciousness and vigor.”

"Allende is a talented writer who deftly uses the techniques of magical realism but also shows great sensitivity in the delineation of character.”

“A vivid, absorbing work of art . . . [Allende’s] characters are fascinatingly detailed and human.”