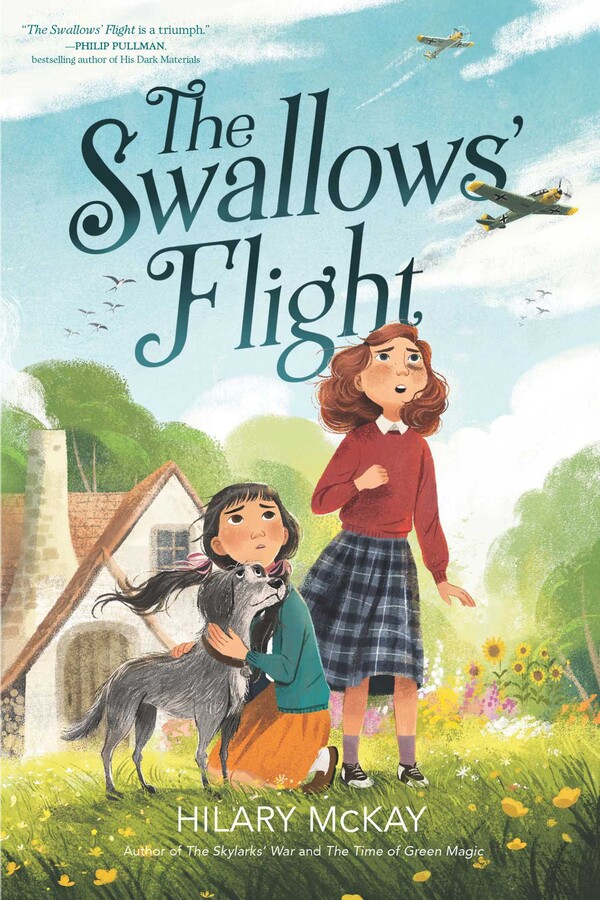 “A triumph.” —Philip Pullman, bestselling author of the His Dark Materials saga

Four young lives across Europe are forever changed in the dawn of World War II in this “stirring and unforgettable” (Kirkus Reviews, starred review) novel from award-winning author Hilary McKay.

In England, Ruby has no friends because of the speckled blotches on her face that kids say look like dirt. And Kate is sickly all the time, her older siblings each taking turns looking after her. Ruby and Kate’s first meeting is nearly disastrous, but the two lonely girls soon strike up a friendship. Their connection becomes all the more important when England joins the war against Germany and the blitz begins overhead.

In Germany, Erik and Hans are best friends filled with plans for their future: Erik taking over their beloved local zoo, and Hans serving pastries right outside the gates. They never expected to be forced to join the national service, training as pilots and tasked with hurting people.

And in London a mistreated dog roams the streets looking for handouts, and for a friend.

All of these lives will cross in the most surprising ways in this heart-rending tale of war and compassion, and hope that can be found in even the most unexpected friendships, brought to life by award-winning author Hilary McKay.

Chapter One: Erik and Hans

“Really!” said Hans, who was in the same class at school and had just moved into the apartment below. “You’re always becoming famous for something embarrassing!”

“I know,” admitted Erik, because it did seem a bit that way. The falling off the bridge on the school expedition to the river; his hospital for dolls—he’d fixed one small girl’s doll and the news had got round, “Erik can mend dolls!” and suddenly he’d found himself with a bedroom full of prim china faces not necessarily attached to their bodies.

And now he was buying dead flies.

The reason Erik needed flies was a family of little birds. Their nest had fallen; the fragile shell of dry mud had crumbled and split from the wall and two fledglings had been lost, but three had survived. Erik’s kleine Schwalben, his little swallows.

He’d tried finding enough flies for them alone, but without having wings himself, it seemed impossible. He’d taken a teaspoon to every rosebush within walking distance, scraping off greenfly. Both the baker and the butcher had asked him very forcefully to get out and mind his manners when he’d offered, as politely as he could, to remove the wildlife buzzing in their windows. He’d haunted the rubbish bins at the back of the apartment building. Even so, he couldn’t manage to keep up with the little birds’ hunger, and so he’d recruited his classmates. They naturally said they were not going to spend their spare time collecting flies for nothing, and demanded to be paid.

Erik had paid first in fruit drops, from the box he’d had for his birthday, and next with an assortment of rather chipped marbles, and after that with cigarette cards: scenes of old Berlin, Flags of the World, and his precious Exotic Birds and Animals. He had a few French cards too, mostly pictures of famous film-star girls.

“Girls!” said Hans, scornfully, when he came with his flies to trade. Hans had a sister named Lisa. She was one year younger than Hans, but she was taller than he was, and she bossed him about. Lisa had a hundred friends, or so it seemed to Hans. “I’ve enough girls at home.”

“Well then, choose a flag,” suggested Erik, “or an armadillo or a camel or something.”

Hans said he didn’t care about flags, and that the camel and the armadillo had unfriendly faces. In the end he chose a girl after all, one with great waves of hair, and a very small top hat tilted over one eye, not at all like his sister or any of her friends. In return he gave Erik an envelope full of bluebottles, mosquitoes, and other small flies. The mosquitoes were squashed and so no use, but the rest were all right. Erik, for about the tenth time that day, explained why squashed were no good, with all the juice wasted.

“You do know everybody is talking about you, don’t you?” said Hans.

“Saying you are crazy!”

“What other cards do you have to trade?”

He did have an album of fairy-tale cards, collected for him by his mother, long before. He couldn’t trade those, because she was still fond of them. Now and then, on winter evenings, she would turn the pages and murmur, “Yes, I remember,” when she came to the seven swans, or the tin soldier, or whatever. Erik also hoped that he might keep his five Dogs of the World: the German shepherd, the husky, the St. Bernard with the little barrel on its collar, the English sheepdog with the smiling face, and the small French poodle. He had owned them for as long as he could remember, given them names and dreamed them stories. They were old friends, and yet…

He’d known these swallows since they were eggs: every summer a nest was built above his bedroom window; already the parent birds were building there again. And now Erik had these three.

He kept them in his bedroom, in a box by the open window, snuggled together in his winter hat, which would never be the same again. Hans came to watch his latest delivery of flies disappear.

“More than an hour’s work gone in seconds,” he remarked. “However do these ridiculous birds manage in the wild?”

“Easy,” said Erik. “They can fly. What I really need is a butterfly net and a very small plane.”

“What you need is my uncle Karl,” said Hans.

“He can fly. And he’s nuts, like you. I’ll tell him about you, next time I see him. Have you given them names?”

Erik laughed and shook his head, so Hans named them on the spot: Cirrus, Nimbus, and Cumulus.

“Cumulus is the fat one,” he said. “He’s my favorite. I shall go and catch his supper right now.”

After that, Hans stopped charging for his flies, and he was a great help to Erik because the little birds were constantly hungry. They were growing so fast that every few hours they seemed to change. Real colors replacing the down. Their pinfeathers coming through on their wings. All three of them stronger every day, stretching out a wing, jostling for the next beak-full of food.

“How did you learn to care for them?” asked Hans, and Erik explained that two years before, it had happened just the same, a nest had fallen and he had scooped up a nestling and fed it on baby food. Bread and milk. And it had died. He wouldn’t make that mistake again, though, he said. Flies, that was what his swallows needed, from four in the morning until darkness at night, flies by the dozen, flies by the hundred, not caught in airy swoops around the rooftops like the parent swallows did, but delivered by a train of helpers with matchboxes, cocoa tins, or sometimes just clenched fists. Up and down the building stairs, driving the occupants mad.

“Wash your hands!” his mother ordered the children, with every new delivery, and sent them to the kitchen sink and made sure they did it properly. The soap wore out and people got so tired of washing they stood under the windows and yelled instead, “Erik! I brought more flies!”

“How much longer?” asked his mother, and Erik said perhaps a week or a little more.

“A week or a little more!” she groaned, and suggested egg yolk, minced sausage, and canary seed soaked in water. Erik shook his head. He dared not risk it.

“Well, well,” said his mother. “I suppose you must do what you can.”

Erik did, although it wasn’t easy. To part with the German shepherd, who he’d named Otto, after his father, who had died before he was born. With dear brave Brandy, the St. Bernard, hero of so many imaginary snowbound adventures. Comet, the blue-eyed, curly-tailed, moonlight-colored husky. Tessa, the smiling sheepdog. “Take care of her,” said Erik, as he handed Tessa to her new owner, and there was an aching beneath his ribs that was beginning to feel familiar even though he still had Belle, the little French poodle.

“She’s pretty,” said Lisa, who had come to see what all the fuss was about. “One day I will have a dog like that, with a pom-pom tail and a pink ribbon in her hair.”

Lisa, although nearly always indignant or angry, was also pretty in a furious kind of way, and Erik gave her Belle, even though Hans disapproved.

“She got exactly what she wanted then,” he grumbled, when Lisa, clutching Belle, had run away downstairs again.

On the fourteenth day after Erik found them, his three swallows flew from his open window, straight from his hand into a bird-filled apricot evening sky, joining dozens of others circling the roofs and eaves and skyways of the city.

Never, ever had Erik known such illuminated joy, such a lift of bliss that it felt as if he could have flown with them.

“Well,” said Hans, who had come to say goodbye to Cumulus and the others. “That’s three more birds in the sky.”

“Yes,” agreed Erik, hanging out of the window to watch. “Imagine being a swallow. Racing about like that!”

“You’d have to eat flies, though,” pointed out Hans. “What do you think they taste like?”

“Pretzels and lobsters,” said Erik, so matter-of-factly that Hans started shouting and flinging his arms about and exclaiming, “Erik? You didn’t! Hey, tell me you didn’t! You can’t have! Are you crazy? Are you joking?” Then he stopped jumping about and came up close to look into Erik’s face. “You are joking,” he said. “Aren’t you?”

“Nutter yourself,” said Erik, wriggling out backward and dumping Hans flat on the floor.

“I wouldn’t be surprised if they did taste like pretzels and lobsters,” said Hans, thinking about it, stretched out on his back. “Perhaps you’re not so crazy after all. Perhaps one day you will be head keeper at the Berlin Zoo.”

“Perhaps,” said Erik hopefully, once more gazing out of the window. “Do you know, Hans, those little birds will go to Africa.”

Erik’s brown curly head was suddenly nodding. He wobbled where he stood, leaning against the comfortable wooden window frame. Only four hours’ sleep every night for two weeks and three insatiable babies all day, and now night was coming in over the rooftops.

Hans leaped and grabbed him just before he toppled out of the open window. 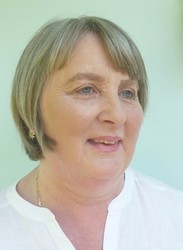 "Hilary McKay is incomparable, a storytelling wizard at the height of her power – and this book is a time machine, transporting you back to 1940. I’m so convinced that McKay’s fledgling swallows are based on her own experience that I find it hard to believe she hasn’t also soared in combat or marched into battle herself."

– Philip Pullman, bestselling author of the His Dark Materials saga

SEE ALL
See more by Hilary McKay
Thank you for signing up, fellow book lover!