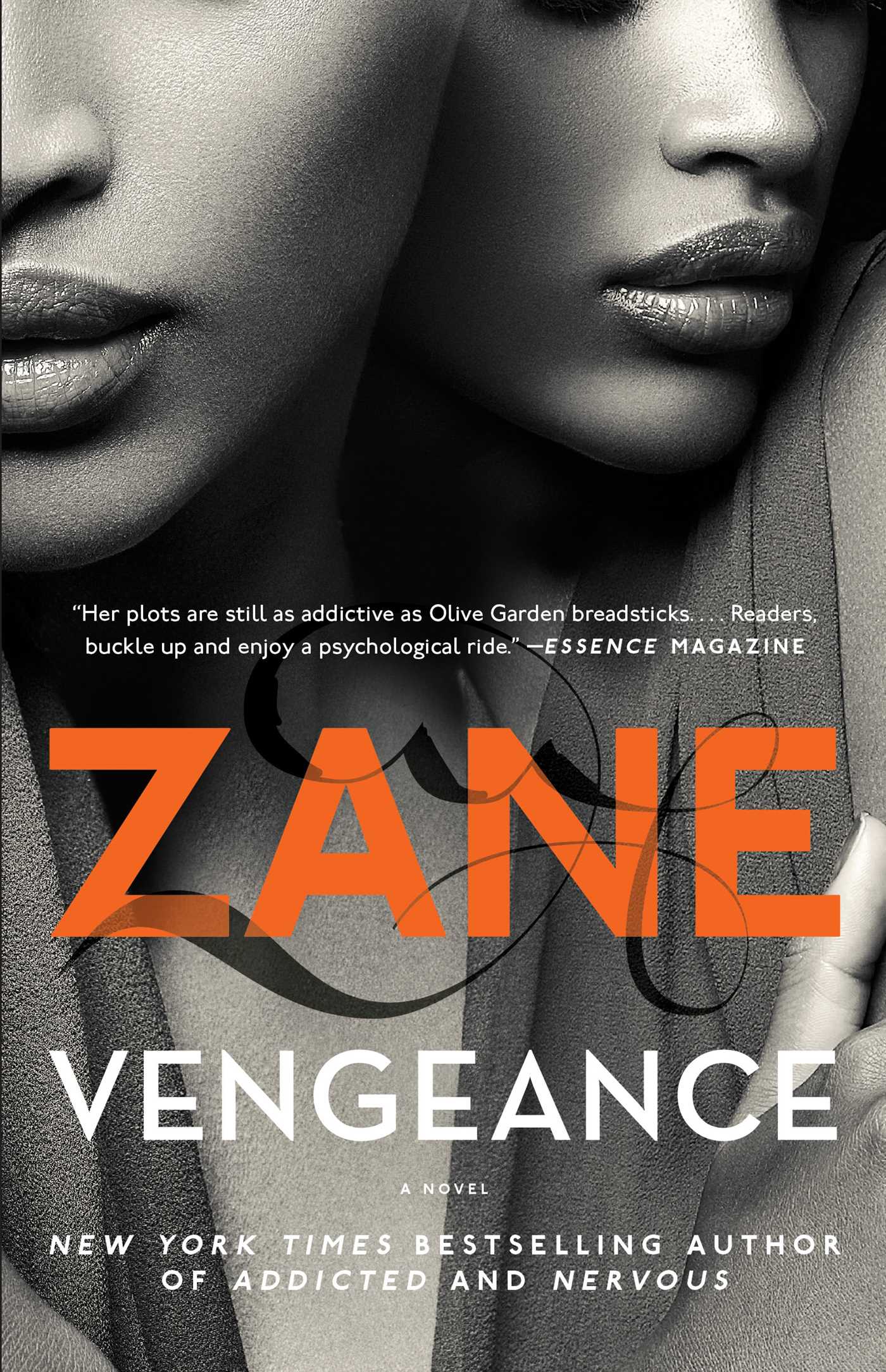 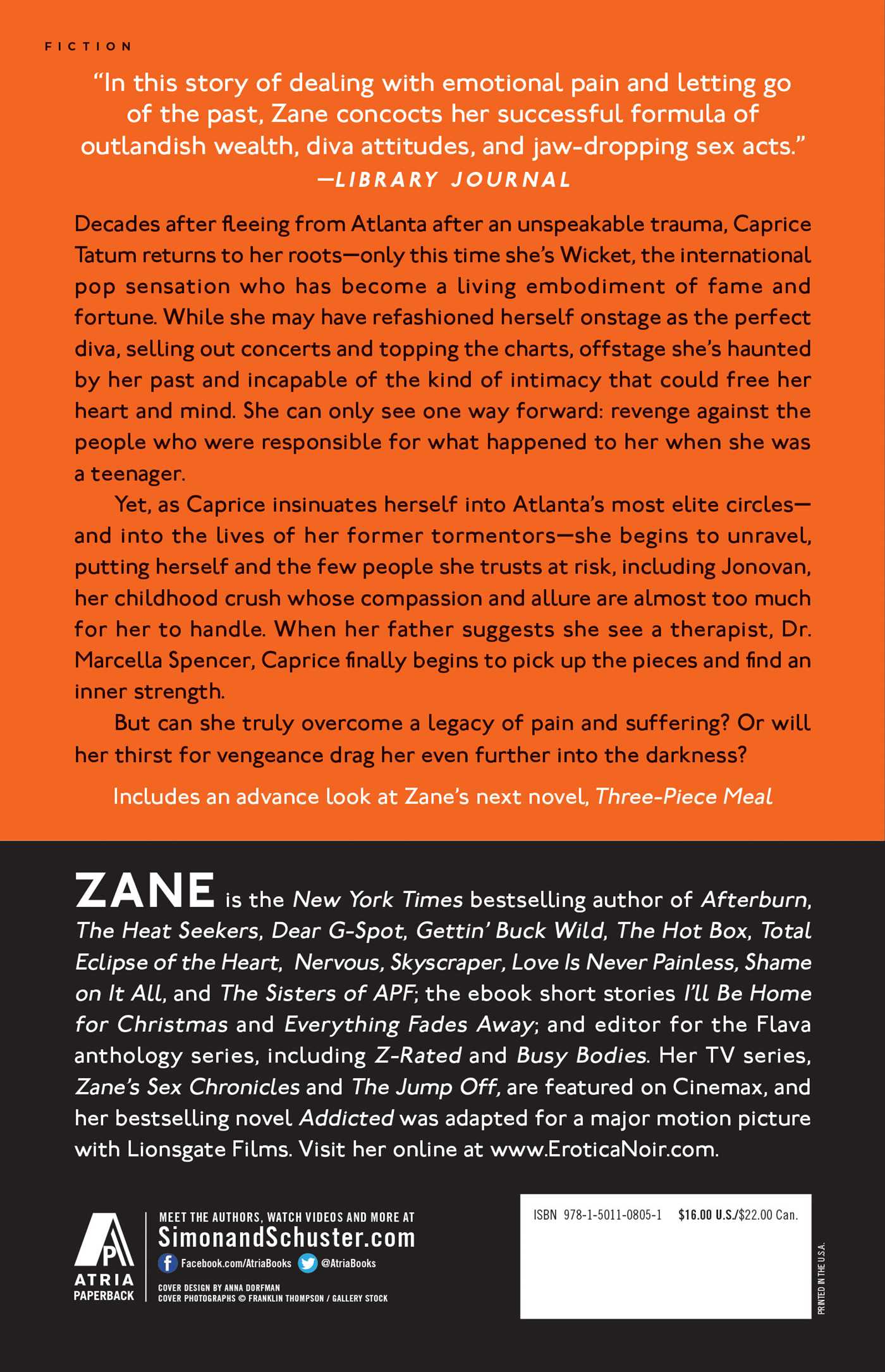 Decades after fleeing from Atlanta after an unspeakable trauma, Caprice Tatum returns to her roots—only this time she’s Wicket, the international pop sensation who has become a living embodiment of fame and fortune. While she may be have refashioned herself onstage as the perfect diva, selling out concerts and topping the charts, offstage she’s haunted by her past and incapable of the kind of intimacy that could free her heart and mind. She an only see one way forward: revenge against the people who were responsible for what happened to her when she was a teenager.

Yet, as Caprice insinuates herself into Atlanta’s most elite circles—and into the lives of her former tormentors—she begins to unravel, putting herself and the few people she trusts at risk, including Jonovan, her childhood crush whose compassion and allure are almost too much for her to handle. When her father suggests she see a therapist, Dr. Marcella Spencer, Caprice finally begins to pick up the pieces and find her inner-strength.

But can she truly overcome a legacy of pain and suffering? Or will her thirst for vengeance drag her even further into the darkness?

The Ritz-Carlton suite was over thirteen hundred square feet with a panoramic skyline view of Atlanta, a music area with a grand piano for me to practice on, an executive study, a butler’s pantry attached to the formal dining room, and a bedroom with the kind of high-thread-count bedding that I was accustomed to.

I was soaking in the massive tub with “Rolling in the Deep” by Adele seeping through the surround-sound system and singing along with the words. Her vibe was so relevant. Our musical styles varied somewhat but we were both getting paid to do what we were passionate about, so it was all good. The video for “Rolling in the Deep” had over 400 million views on YouTube, but my video for “The Other Side of the Pillow” had nearly 900 million views. Glad my body was looking tight that week we filmed it in Punta Cana. Otherwise, I would have been worried about people seeing my flaws forever and would have cringed when I heard the numbers. Even though my song was dope, the visual effects of the Dominican Republic made the video truly pop. Most people in the United States would only ever dream of traveling the world. I was blessed to actually do it on the regular. Sounds crazy but I had more than a million frequent flier miles.

Then again, I was actually flawless, keeping it real. I really didn’t have any choice other than to remain unblemished and impeccable with both my looks and tastes. Rivalry was thick in the music industry and it was no longer completely about selling records, even though I had sold more than 150 million albums and over a billion singles at that point in my career, shattering all kinds of records. It was about being a performer. Selling out arenas for hundreds—sometimes thousands, if bootlegged—of dollars per ticket and making the world believe you were the shit. That you could walk on water, that you were superhuman and unparalleled and untouchable.

Untouchable? I was definitely that for an overabundance of reasons. I tried to quickly distance myself from the long-ago memories that were persistently clambering back and focus on my upcoming show that evening. As always, I was going to turn it out, but first I had to get dressed and go do a sound check. I hated sound checks. They were nothing but an intrusion on a perfect day. I had been doing the shit long enough that they should have known exactly what settings to have on the soundboards, but each venue space was different, so I dealt with it.

Pure irony that I had never performed in Atlanta before. Then again, I had my reasons. Damn good reasons. Okay, the memories were coming back again. It was time to do something extreme . . . like playing in Thumper, aka my cooter, but what with?

I scanned the room as “Rack City” by Tyga came on. Aw, yeah, some freaky shit for me to get off on! I stood up, grabbed my back scrubber with the wooden handle, and then sat back down in the tub. I moved the end of the handle in and out of Thumper and closed my eyes. I started gyrating my hips to the music, like I was a stripper named Nutcracker working the pole, except the pole was literally between my legs and inside of me. I slid it in deeper and deeper until I was thrashing around in the tub by the time the song ended. I was an expert at getting myself off quickly.

“Damn!” I yelled out as I reached a toe-curling climax. Then I sighed.

It was what it was and I needed to finish bathing and get dressed. It was only a matter of time before Diederik, Antonio, and Kagiso—my three bodyguards—who occupied the suites surrounding mine, would come to get me for the sound check. One of them was always stationed outside my door. Too many damn nuts in the world obsessed with celebrities. One usually stayed in the lobby at all times, by the elevator as well. I felt like that only drew unnecessary attention, but they insisted. There is a very high cost for fame that no one could ever comprehend until they find themselves in that position.

Kagiso was straight from the African bush. At least, I would tease him about that. In all actuality, he was six feet five inches of intelligence, brawn, and fineness. Dark as midnight, with skin softer than butter, these clear brown eyes, and a cleft in his chin that women found to be an instant panty wetter. He had a master’s in early childhood education that he had obtained after moving to the United States on a visa to go to school. Don’t ask! Imagine a man that size sitting in a circle with five-year-olds. He had done it, though, for an entire decade, before he decided to pursue something else.

Antonio was from East L.A., born and raised, jumped into a gang at twelve, arrested for the first time at thirteen, and tired of living in chaos by sixteen. He ran away to San Diego, hung tight for a couple of years, joined the navy, served his country, and went into private security. At six two, he was the shortest of my bodyguards but was thicker than a Snickers, with muscles rippling everywhere. He had sepia eyes, dimples, cinnamon skin, and he was bowlegged—an added bonus.

Diederik was Nordic and get this, six foot ten. Looked like a tree walking toward you. Spiked blond hair, ice-green eyes, and a gorgeous bone structure. He looked like “Suck my dick” spelled out.

Yeah, I had some sexy-ass motherfuckers protecting my life, but I had never technically messed around with any of them, nor would I ever do such a thing. I happened to know for a fact that they all needed lap bands on their dicks, though. Men like them needed to come with both a warning label and a disclaimer:

FUCK OR SUCK AT YOUR OWN RISK! This dick could possibly tilt your cervix, cause your clit to swell up like a balloon, and you may have to toss cups of soapy water at your pussy for several days afterward because it will be too sensitive to the touch.

Antonio actually tilted a broad’s cervix once when we were touring in France. She had the nerve to try to slap me with a $12 million lawsuit. I did not have a damn thing to do with her making the decision to tackle that python in his pants. That shit was on her. People will sue over any damn thing when you have money, even if you’ve never met them, or even laid eyes on them before. When I saw photos of the chick, my first inclination was to ask Antonio what the hell he was thinking in the first place. But the women in France can be aggressive, and it’s not like I expected them all to be celibate year-round before they had to guard me. It was certainly not a prerequisite. They were grown-ass men who did grown-ass things. They were all single and free to mingle, but I was damned if I would pay some floozy for giving it up willingly and getting hurt. The most I would offer someone is a bottle of Advil and my condolences on having a big-ass pussy for the remainder of her natural life.

I had thrown on a sexy little number of a dress and some pumps about fifteen minutes later and put on some makeup. I was not the type to use a stylist, hairdresser, and makeup artist around the clock; only when I was about to go onstage, do a photo shoot, interview, or whatnot. A lot of my counterparts went through all of that shit to walk out on the veranda to do Pilates. It was not that serious. However, I was not going to get caught looking like I just emerged from a cave, either, so I kept it simple and classy. I looked good as shit without makeup but did not feel like dealing with the drama from tabloids and ratchet websites looking for an opportunity to do a caption of me slipping.

The knock came at my door. I grabbed my purse and went to answer it before someone panicked and knocked it down. I was not riding in the bulletproof SUV with my guards, though. I had other plans, and they were about to find that out.

Photograph courtesy of the author
Zane

Zane is the New York Times bestselling author of Afterburn, The Heat Seekers, Dear G-Spot, Gettin’ Buck Wild, The Hot Box, Total Eclipse of the Heart, Nervous, Skyscraper, Love is Never Painless, Shame on It All, and The Sisters of APF; the ebook short stories “I’ll be Home for Christmas” and “Everything Fades Away”; and editor for the Flava anthology series, including Z-Rated and Busy Bodies. Her TV series, Zane’s Sex Chronicles, and The Jump Off are featured on Cinemax, and her bestselling novel Addicted is a major motion picture with Lionsgate Films. She is the publisher of Strebor Books, an imprint of Atria Books/Simon & Schuster. Visit her online at EroticaNoir.com.

More books from this author: Zane

SEE ALL
See more by Zane
Thank you for signing up, fellow book lover!