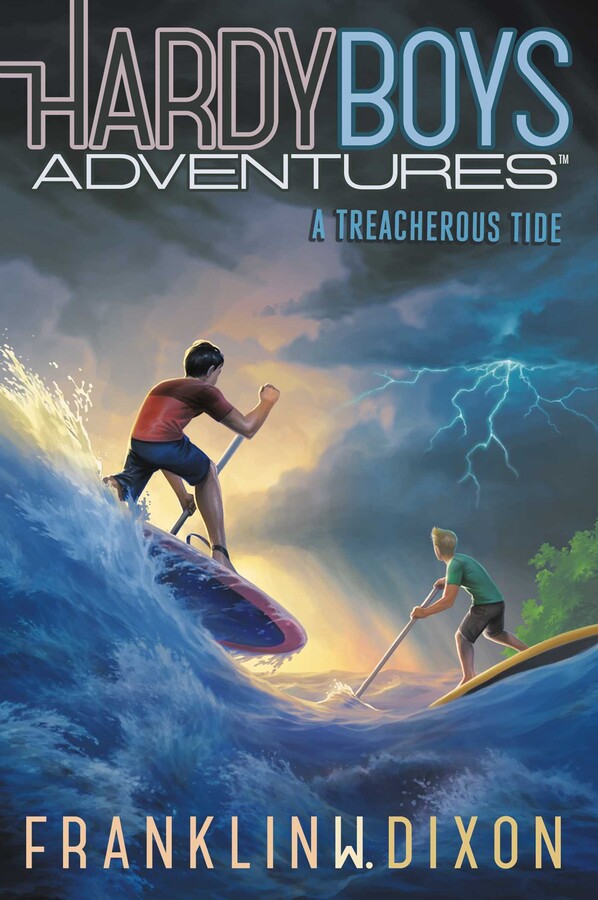 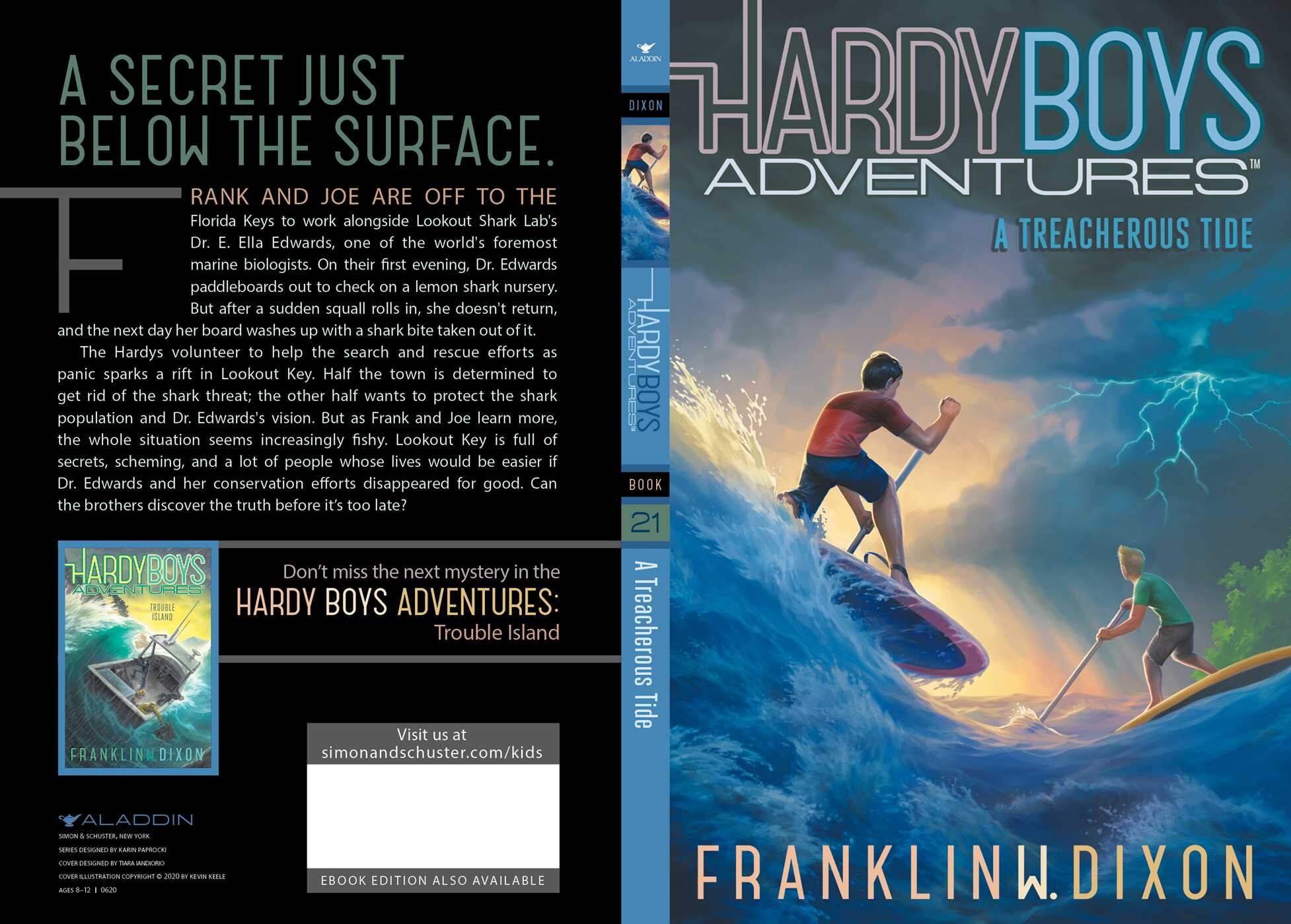 Brother detectives Frank and Joe dive deep into the Florida Keys to find a missing person in the twenty-first book in the thrilling Hardy Boys Adventures series.

Frank and Joe Hardy have been invited to take part in a conservation mission by a marine biologist at the Bayport Aquarium. The boys get to go on an all-expenses paid trip to the lush and beautiful Florida Keys to help save sharks!

But the trip’s purpose is suddenly sidelined when a paddle boarder goes missing and rumors start that the disappearance is the result of a shark attack. After spending so much time learning about the local shark population, the Hardy Boys aren’t buying the story.

It will take all of Frank and Joe’s recently acquired knowledge about sharks and their habitat to solve this case. Will they be able to discover what’s really going on before it’s too late?

Chapter 1: Shark! 1 SHARK! FRANK
I STOOD ATOP THE CLEAR, AQUA-COLORED water, the gentle current lapping at the edges of my stand-up paddleboard as a warm island breeze tickled my cheeks.

“This is the life.” I sighed, letting the long paddle rest idly in the water while our group waited for the woman paddling toward us from the sixty-five-foot research vessel anchored a hundred yards offshore from Lookout Key, a tiny island in the middle of the Florida Keys archipelago.

“I tell myself the same thing every day,” the man on the paddleboard to my right replied, absently rubbing a tan bicep tattooed with a picture of a majestic shark gliding over a ship’s anchor. Below it was the name Sally, which also happened to be the name painted on the hull of the boat offshore. It wasn’t a coincidence. Captain Rogers—or “Cap” as he’d said to call him when he’d picked us up from the airport earlier that day—was the R/V Sally’s captain. R/V stood for “research vessel,” and it was one of the main reasons we were there.

“It’ll get even better once we get you kids introduced to some of our friendly neighborhood sharks,” Cap added, pushing his sun-bleached blond hair off his forehead. “We don’t normally get too many of the really big boys and girls in the coastal area we’ll be surveying, but there have been a couple nice-size tiger sharks spotted. With a little luck, we’ll be able to get one on board the R/V to study while you’re here.”

“I’m still not so sure about the sharks part of this trip, but I could definitely get used to the scenery,” a red-haired girl my age said with a little shudder. Abby was one of the other two Bayport Aquarium student volunteers besides Joe and me who’d signed up for the Oceanic Explorers Exchange Program with the Lookout Shark Lab, which used the R/V as its floating base.

I breathed in the salty air and smiled. I was sure about both the sharks and the scenery. It wasn’t like I hadn’t been in the Atlantic Ocean before, but all the palm trees and pelicans made this practically another world compared to our hometown of Bayport up north. The Florida Keys are over a thousand miles south and a whole lot more tropical. We might not have been on vacation, but the built-in vacay vibes didn’t hurt.

“So, um, how big are those tiger sharks you mentioned?” a kid named Randy, the fourth volunteer, asked timidly.

“Don’t worry, we haven’t lost a student yet.” Cap laughed. “In fact, one of the main goals of our research is to let people know about the importance of sharks. They’re not the villainous monsters the movies make them out to be.”

“Did you know you’re statistically more likely to be attacked by a cow than by a shark?” I said, trying to reassure Randy. To be totally honest, I was kind of trying to reassure myself, too. I mean, I believed a hundred percent in the lab’s mission and was super excited to get hands-on shark ecology experience. Still, it was hard not to be a little nervous around predators with such a fearsome reputation.

“Yeah, but we’re not going to be swimming with cows,” Abby reminded me.

I was just about to reply with another reassuring fact when I felt something bump the underside of my board. It wasn’t until it clamped down on my ankle that I screamed.

My board rocked beneath my feet, sending me splashing into the ocean, where whatever horror lurked below was waiting.

The creature that burst through the water beside me wasn’t a shark, though. It was my younger brother, Joe!

“Hardy shark!” he cackled. “The awesomest and most mysterious shark of all!”

“Very funny,” I grumbled, but even with my heart beating out of my chest, I couldn’t help smiling.

I didn’t know about “awesomest,” but Joe had the mysterious part right. Or mystery-solving, at least. Joe and I had well-earned reputations as Bayport’s foremost teenage private eyes. We weren’t on this trip to detect, though. Not that a case involving a shark would be our first—we’d had a run-in with a pair of them when someone kidnapped an endangered sea turtle from the Bayport Aquarium a while back. The only mysteries we expected to find in the Florida Keys on this trip were mysteries of the deep!

Everyone was still laughing as I climbed back onto my paddleboard, even Cap.

“Get the horseplay out of your systems now, kids.” I looked up to see that the woman who’d been approaching us from the research vessel was now bobbing alongside us on her paddleboard. She was middle-aged and wore board shorts and a Lookout Shark Lab T-Shirt. Her shirt wasn’t the only shark-themed item she was wearing. A braided leather necklace with a shark’s tooth pendant hung around her neck. Her paddleboard stood out too. It had a vintage feel—a bright-blue-and-green paint job with wave patterns running around the edges.

This was the first time I’d seen E. Ella Edwards, PhD, in person, but I recognized her from the video meet and greet before the trip. Dr. Edwards was the head of Shark Lab, and one of the world’s most renowned marine biologists.

“I want you to have fun on this trip, but oceanic research is serious business. If you mess around like this on the R/V, someone could get seriously hurt.” She glared at each of us, Cap included, with clear, blue-green eyes that matched the water.

“I’m not just talking about people getting hurt,” she added. “We’ll be handling live sharks, and if we’re not careful, they can also be harmed. Global shark populations are declining rapidly, and we can’t afford to lose any because you’re goofing around.”

Everyone nodded in solemn agreement. A big part of why we’d all wanted to come on this trip was the adventure, but as aquarium volunteers, we all cared deeply about the ocean and its inhabitants, and we were here to help make a difference.

Dr. Edwards’s sea-colored eyes crinkled as the stern glare turned into a broad smile. “You can call me Trip if you want—everyone else does. Or Triple E, or EEE. I have a nickname for every initial.”

“I can’t wait to get you all trained as junior members of the Shark Lab research team. When most people think about sharks, they think about Jaws, but great whites are one of over five hundred species, and those are only the ones we know about. Sharks aren’t just the ocean’s premier apex predators. They are evolutionary marvels that have survived and thrived since the time of the dinosaurs.”

“Up until the last century,” Cap added bleakly.

Dr. Edwards’s smile faded. “A lot of people don’t think the survival of creatures like sharks affects them much, but sharks are a measuring stick for the entire world’s marine ecosystems.”

“Without healthy oceans, millions and millions of people would go hungry, so it’s our food chain that’s affected too,” I chimed in. Part of my job as a Bayport Aquarium volunteer was giving little kids tours of the shark exhibits, so I knew more about our finned friends than your average teenage detective. “Lots of sharks means lots of fish and a rich diversity of the sea life that provides food for a huge part of the world’s population.”

Trip snapped her fingers. “Bull’s-eye. Healthy sharks equal a healthy ocean. Without them, the entire ecosystem starts to collapse. Theirs and ours.”

“And it’s us humans who are mostly to blame,” Cap said bitterly.

The sky had darkened while we were talking, and a thick bank of fog had begun rolling in toward the pier to our right, obscuring the old lighthouse poking up from the peninsula farther down the coast.

Dr. Edwards held her palm out and looked up as the first drops of rain began to fall. “I’d hoped to start your trip off with a paddleboard tour of the mangrove swamp past Alligator Lighthouse, where the lemon sharks have their nursery.”

“Looks like the weather forecast was right, though,” Dr. Edwards said. “Cap, why don’t you get the kids settled onshore while I check on the pups.”

There was a collective groan from me and my fellow volunteers.

Dr. Edwards gazed toward the vanishing lighthouse. “This part of the country doesn’t usually get a lot of fog, but this island is a bit of its own microclimate. It’s not unusual for fog to roll in this time of day now. If you’re not careful, it’s easy to get turned around. From the look of that sky, a nasty storm is rolling in with it.”

Cap nodded in agreement. “We don’t want any of you lost at sea your first night here.”

“I second that,” Randy said heartily.

“I’ll see you all at Chuck’s Shuck Shack for dinner,” Dr. Edwards said as she turned her board and began paddling toward the fog.

“How come it’s safe for her and not us?” Abby asked.

Cap chuckled. “No one said it was safe. But she knows her way around. Besides, Trip is fearless. Paddling out to the mangroves is her evening ritual whenever we’re not out on the R/V. It takes a hurricane to keep her inside.”

As we paddled for shore, I turned to look back and caught one final glimpse of Dr. Edwards disappearing into the fog. We’d just stepped off our boards in the shallow water a few minutes later when we heard someone scream farther down the beach.

The word that followed was unmistakable.

Randy ran for the beach so fast, he tripped over his feet, tumbling face-first into the sand. Abby was right behind him.

My heart was thumping too when I remembered Joe’s prank. Apparently, he wasn’t the only one with a predatory sense of humor.

“Somebody’s probably just messing around—” I started to say when I saw Randy pointing toward the fog, opening and closing his mouth like he was trying to say something but couldn’t quite get the words out.

I followed his finger, and that’s when I saw it for myself: a large gray dorsal fin slicing through the water where I’d last seen Dr. Edwards before she’d vanished into the mist.