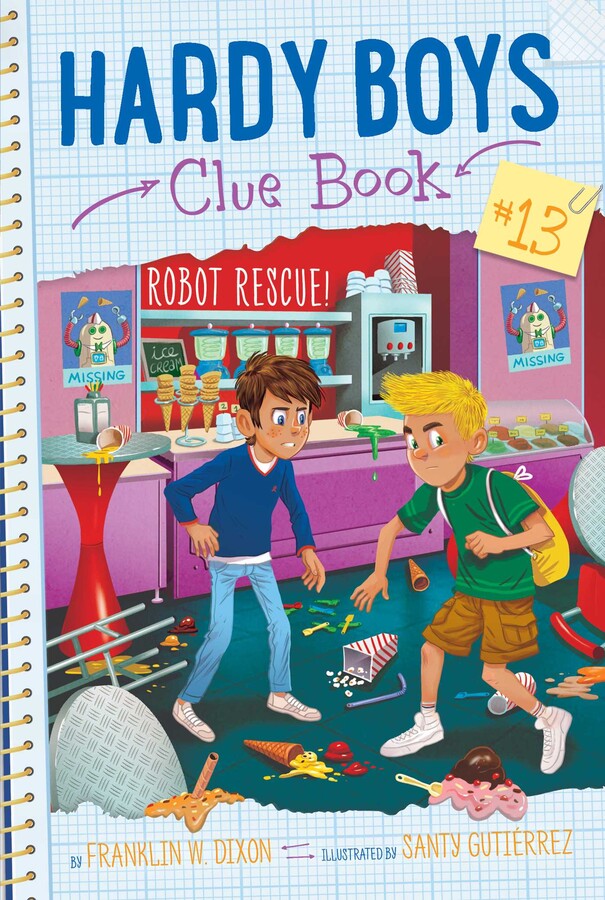 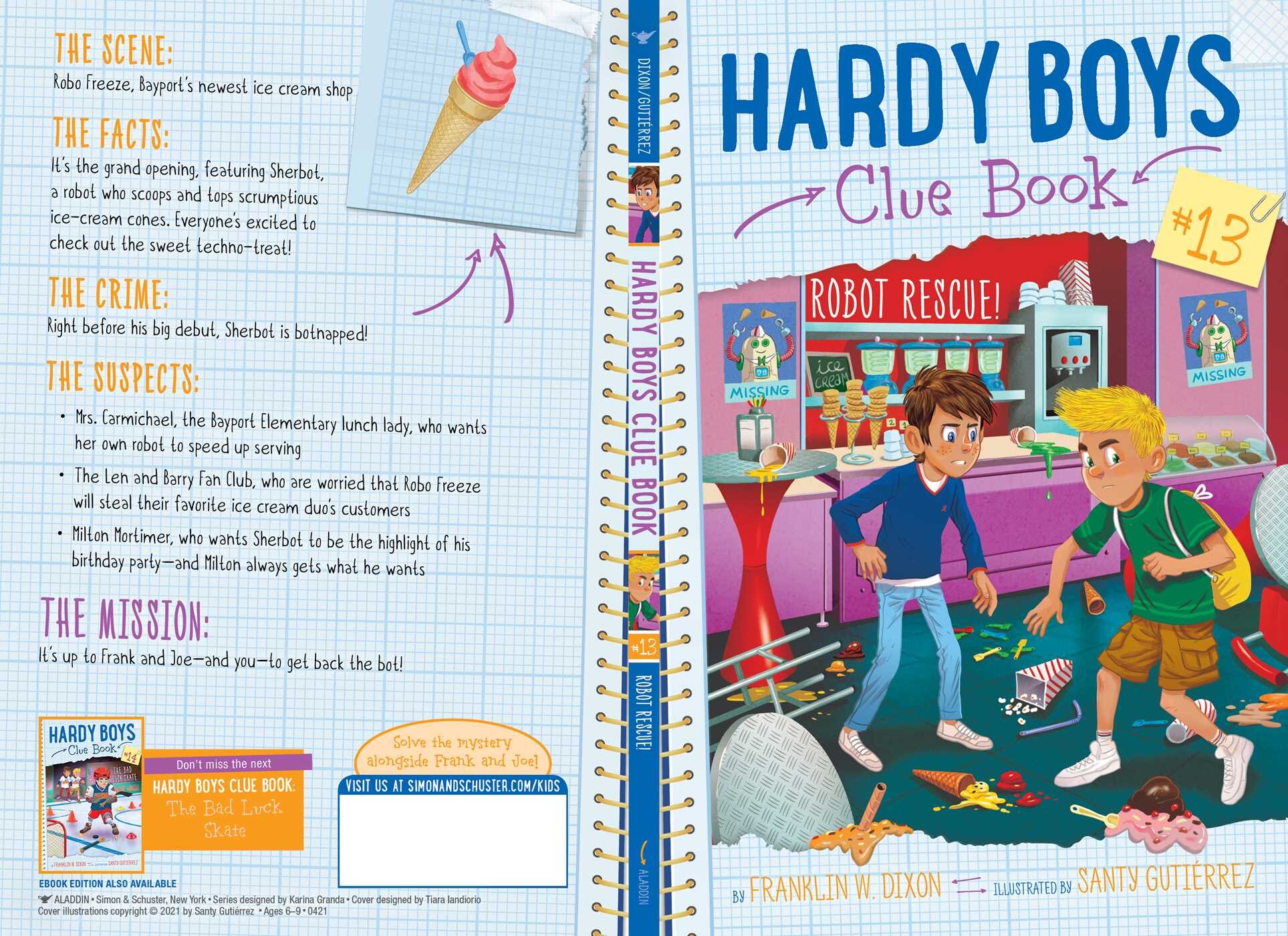 Frank and Joe are excited to join Chet as he gets a preview of Robo Freeze, Bayport's newest sweet treat phenomenon. But Robo Freeze isn't just any ice cream shop—Sherbot the robot scoops and tops your cone to your exact specifications.

But just before his big debut, Sherbot is bot-napped! Who'd want to sabotage Robo Freeze before their grand opening? Can the Hardy Boys track down the culprit and get back the robot, or will they be left with a melty mess?

“And so is tasting!” their best friend, Chet, declared.

Frank, Joe, and Chet had lots to be excited about that spring Friday afternoon. They were on their way to Bayport’s newest ice-cream parlor—Robo Freeze!

“It’s so cool that you won that ice-cream-eating contest at the mall, Chet,” Frank said. “Thanks to you, we’ll get a sneak peek at Robo Freeze before it opens tomorrow.”

“How could we forget?” Joe asked, grinning.

Sherbot, the ice-cream-making robot, was the creation of the Andersons, a family of inventors living in Bayport. It had been their idea to open an ice-cream parlor on Bay Street where all cones were scooped by Sherbot!

The three boys couldn’t wait to check out Robo Freeze before the grand opening. But as they neared the store, they saw a small group of kids gathered outside. Some of them were holding signs.

“I don’t think they want Robo Freeze to open at all,” Joe said, pointing down the street. “Check out their signs!”

As they neared the group, the brothers and Chet read some of the messages:

“They’re fans of Len and Barry ice cream,” Chet explained. “My sister, Iola, is president of the fan club.”

“Len and Barry?” Joe asked. “You mean the guys who sell ice cream from a tie-dyed truck?”

“Bubble Gum Yum isn’t my favorite,” said Chet, shaking his head. “I mean, do you chew it or lick it?”

Iola rolled her eyes as if to say, Seriously?

Frank pointed at the sign Iola was holding, which read DEPROGRAM ALL ROBOTS! “I know you like Len and Barry’s ice cream, Iola, but what do you have against robots?”

She turned to two other club members. “Mason, Gabriela, tell them.”

“An ice-cream-making robot will take customers away from Len and Barry,” Mason explained.

“Soon robots will replace everybody,” Gabriela said. “Even teachers.”

“Robo teachers?” Joe joked. “Can they be programmed not to give homework?”

“Very funny,” said Iola, but she didn’t laugh. “I thought you guys were detectives, not comedians.”

Frank and Joe were detectives, who loved solving mysteries more than anything. The boys even had a notebook where they figured out the five Ws of each new case: Who, What, Where, When, and Why.

Iola led the club in a chant to close down Robo Freeze. Their voices were soon drowned out by a jingly tune played by a truck pulling up to the curb—the Len and Barry ice-cream truck.

Len leaned out of the truck’s window and shouted, “Peace out, kids! Ready for a far-out surprise?”

Barry appeared at the window, holding a tray of tiny cups filled with ice-cream. “Sample the new flavor we whipped up just for you,” he said. “We named it Fan Club Grub!”

“Omigosh! Fan Club Grub?” Iola said excitedly. “They named a flavor after us?”

The club members tossed their signs in a pile on the sidewalk, then raced toward the Len and Barry ice-cream truck.

“I wonder how it tastes,” said Frank.

“I like all of Len and Barry’s flavors except one,” Joe said, shuddering. “Lickety-Split Licorice!”

“Don’t tell that to Iola,” Chet warned. “The Len and Barry Fan Club loves every flavor the guys have ever made.”

“That’s cool,” Joe said with a smile. “But you know what’s even cooler? Trying ice cream made by a robot!”

The brothers and Chet approached the Robo Freeze entrance. The window shades were down and the door was locked.

After a few seconds, the door opened halfway. A boy poked his head out. Frank, Joe, and Chet recognized him as ten-year-old Holden Anderson. Holden went to a private school for kid geniuses in the next town.

“I know who you are,” said Holden. “Quick, what’s the secret password?”

“Good enough,” said Holden as he flung the door wide open. “Are you ready to meet Sherbot, the man of the hour?”

That earned Joe an elbow-nudge from Frank.

Frank, Joe, and Chet followed Holden inside Robo Freeze. Each wall of the ice-cream parlor was painted a different color: orange, blue, yellow, and red. Silver and red café tables with matching chairs were set up, ready for customers the next day.

“Hey, look!” Frank said, pointing toward the back of the store. Behind the counter, with a huge round head, a cheery smile, and flashing green eyes was—

“That’s got to be Sherbot!” Joe declared.

“The one and only!” said Holden proudly.

Chet and the Hardys rushed to the counter to get a better look. They were so busy checking out the robot, they hardly noticed Mr. and Mrs. Anderson standing behind the counter too.

“Guys, meet my parents,” Holden said. “They built and programmed Sherbot, and I helped with coding.”

“Holden is a microchip off the old block!” Mr. Anderson joked. “Right, Phyllis?”

“Right, Steve.” Mrs. Anderson chuckled. “Our name may be Anderson, but we’re thinking of changing it to Androidson!”

While the Andersons laughed it up, Joe whispered to Frank, “No robot jokes, huh?”

“Mom, Dad, this is Chet,” said Holden. “He’s the winner of the ice-cream-eating contest.”

“Thanks for inviting me and my friends for a sneak lick—I mean, sneak peek—at Robo Freeze,” Chet said.

“You’ll get to sample Sherbot’s ice cream too,” Mr. Anderson said. He pointed to a row of jumbo cardboard boxes standing against the yellow wall. “We didn’t stock up on all those for nothing.”

“Crunchy sugar cones,” Mrs. Anderson said with a smile, “waiting for Sherbot to fill them with delicious ice cream.”

Chet was busy studying a chalkboard on the wall. Listed there were fifteen different flavors.

“How does Sherbot know what flavors to fill the cones with?” he asked.

“Sherbot runs by voice commands,” Holden explained. “All you have to do is tell him.”

“Take a crack at it, Chet,” Mr. Anderson said. “Order the first official cone from Sherbot.”

Sherbot’s green eyes kept flashing as his head began to swivel back and forth. With a whirring noise, the robot faced Chet. “Greetings,” he droned. “Name your consistency. Scoop or soft serve?”

“You’ve got so many, it’s hard to choose,” Chet said, looking up at the chalkboard. “But I really like chocolate.”

“Chocolate. Affirmative,” Sherbot said, grabbing an ice-cream scooper with his other hand. He was about to dig into a tub of chocolate ice cream when Chet blurted out, “Wait! I like banana rocky road, too. But I also really like almond fudge crunch. Not as much as peppermint candy, but only if it has real chunks of peppermint—”

“Sherbot is programmed to take one command at a time, Chet,” Mr. Anderson said. “Why don’t your friends get their cones while you decide on a flavor?”

Chet stepped back as Joe took his place at the counter.

“Sherbot, make my ice cream,” Joe commanded. In response to the robot’s questions, he ordered one big scoop of mint chocolate chip.

Frank, Joe, and Chet watched wide-eyed as the big gleaming robot landed a flawlessly round scoop of mint chocolate chip ice cream in a sugar cone.

“Is Sherbot the perfect robot or what?” exclaimed Holden.

Sherbot ground to a halt. “Negative. Command not recognized.”

“Sherbot hasn’t been programmed to squeeze hot fudge yet,” Mr. Anderson explained. “We’re working on it.”

“No hot fudge?” Chet complained. “How perfect can an ice-cream-making robot be if he doesn’t rock hot fudge?”

“Sherbot is perfect!” Holden insisted. “Why don’t you ask for whipped cream instead, Joe?”

The robot placed the ice-cream cone inside a holder. He then grabbed a can, pressed his robotic fist on the top, and—

PFFFFFFIIIITTTT! A torpedo of white cream shot over the boys’ heads. Behind them, a voice shouted, “Cheese and crackers!”

Frank, Joe, and Chet spun around to see a woman wearing a blue uniform and apron, with a blob of whipped cream on the front of her hairnet. The boys recognized her at once. She was their school lunch lady, Mrs. Carmichael.

Santy Gutierrez resides in the seaside city of La Coruña, Spain. He has won acclaim as the Best Spanish Young Editorial Cartoonist and Best Galician Caricaturist, among others.