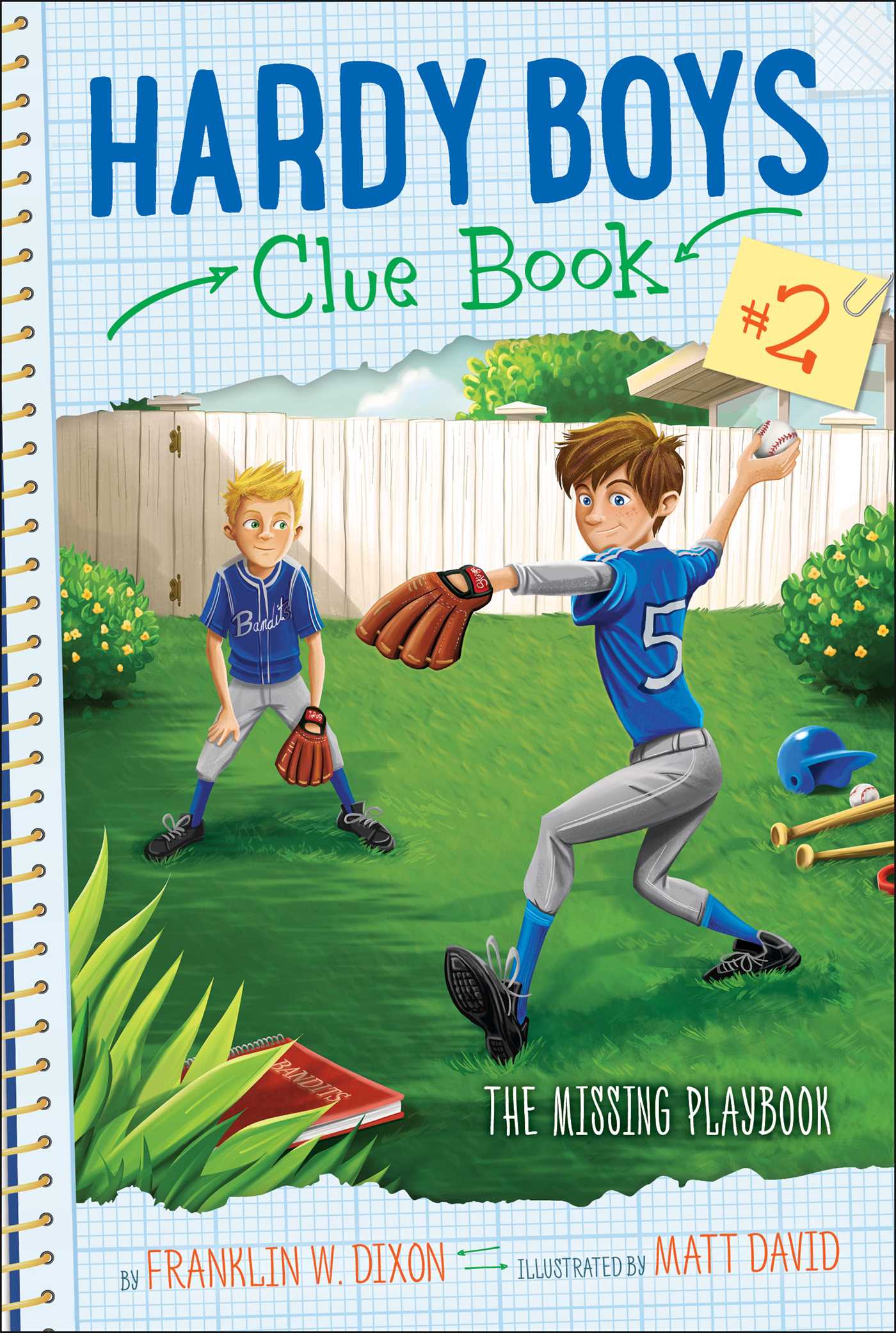 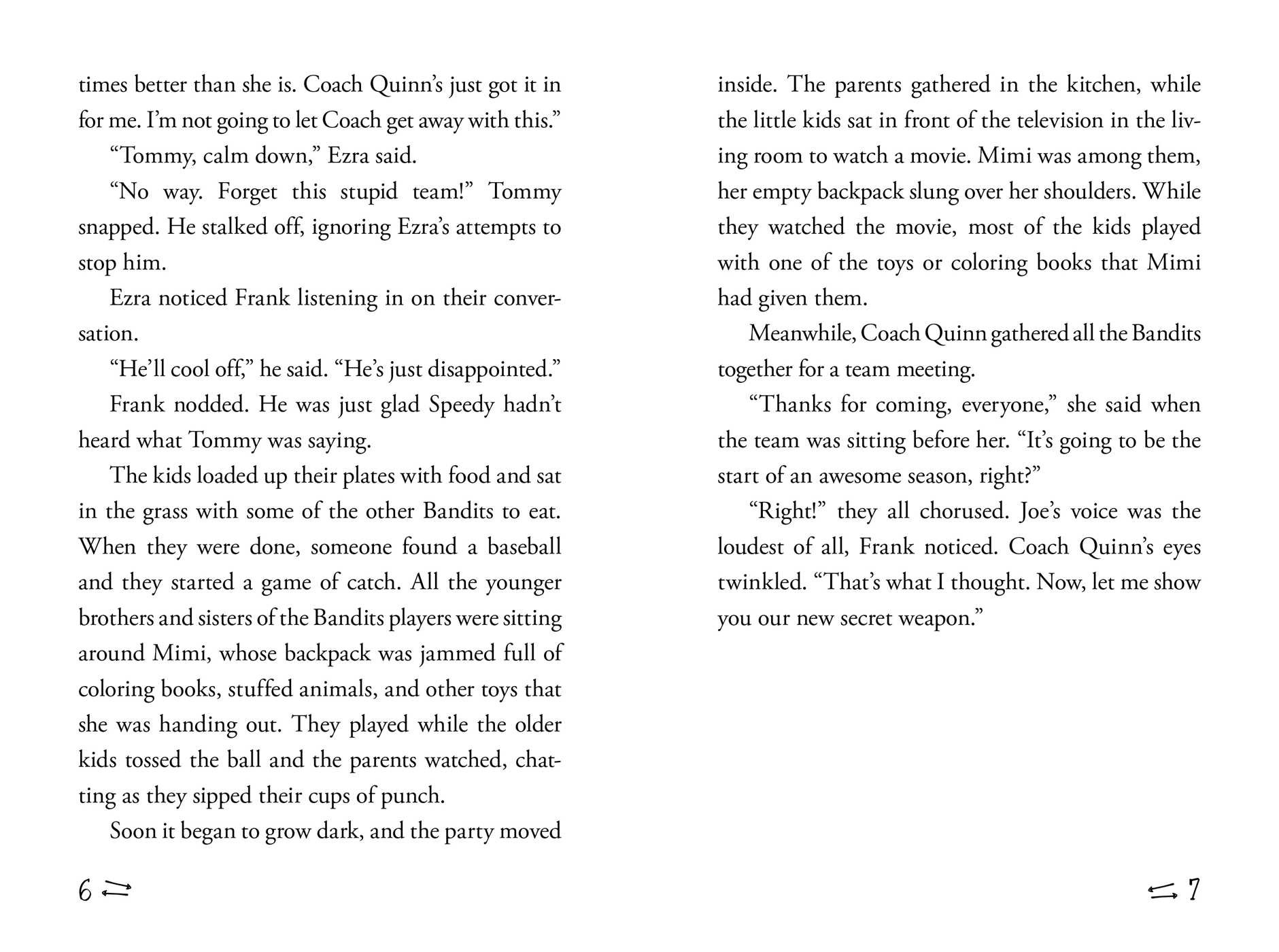 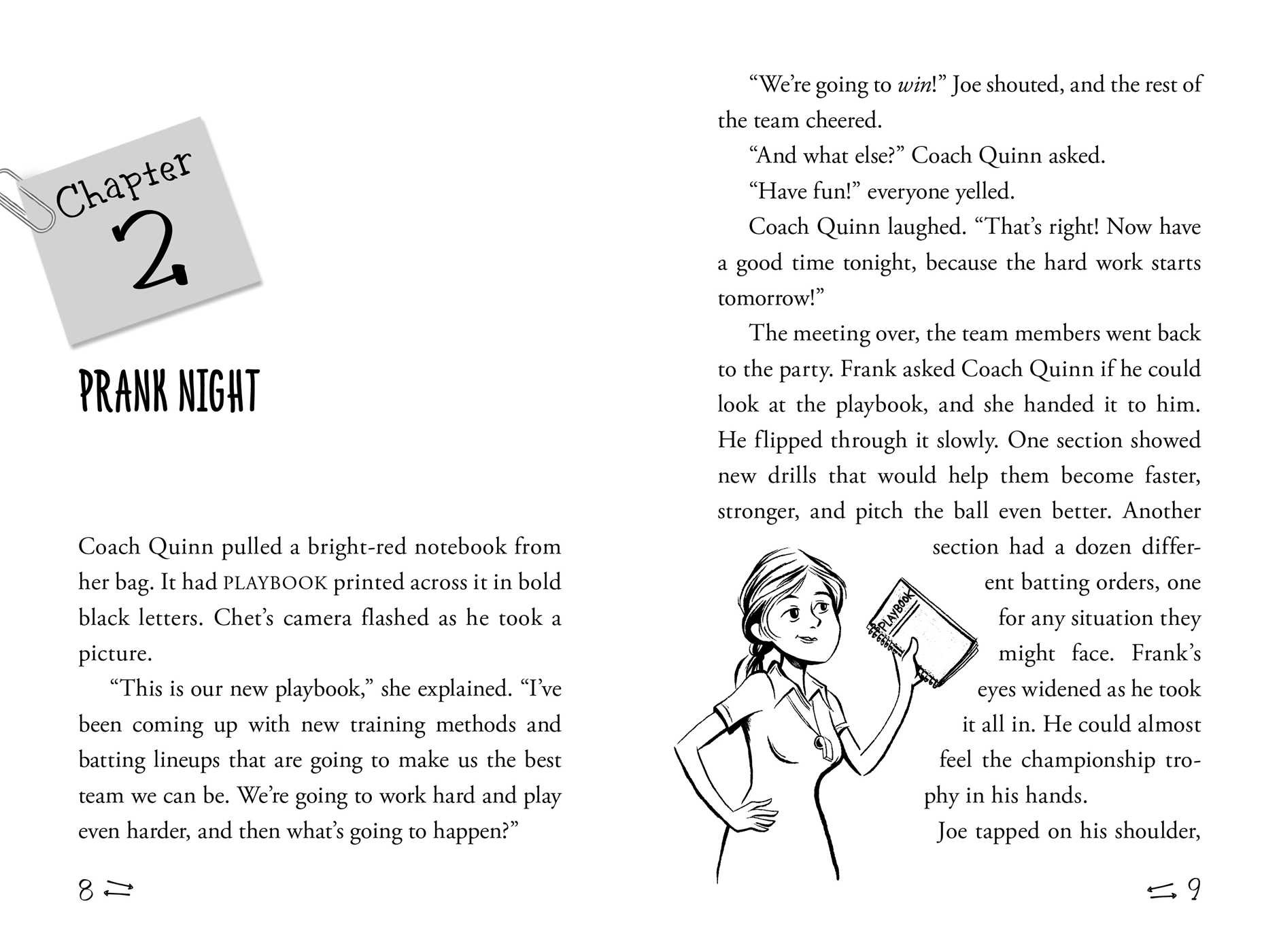 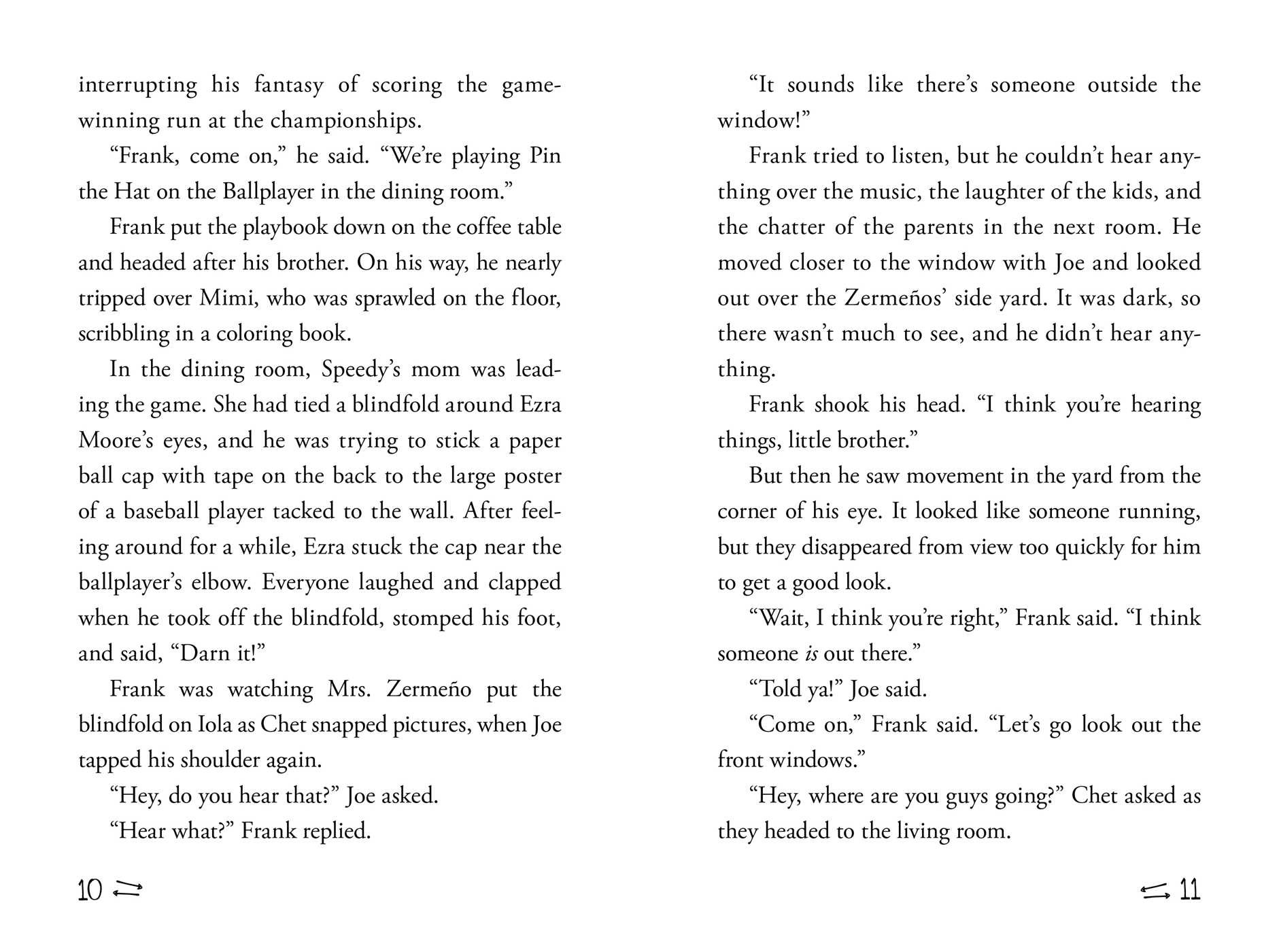 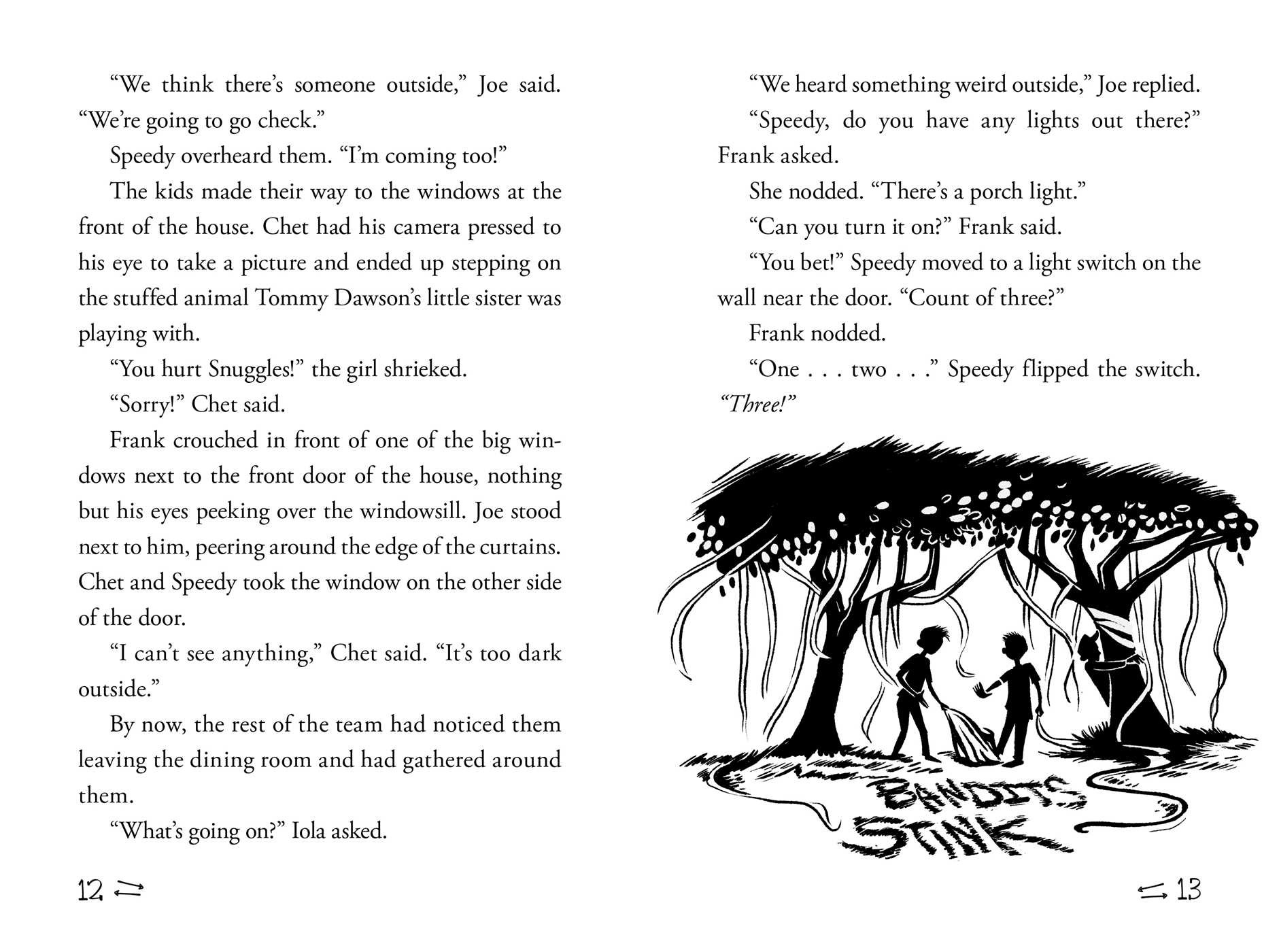 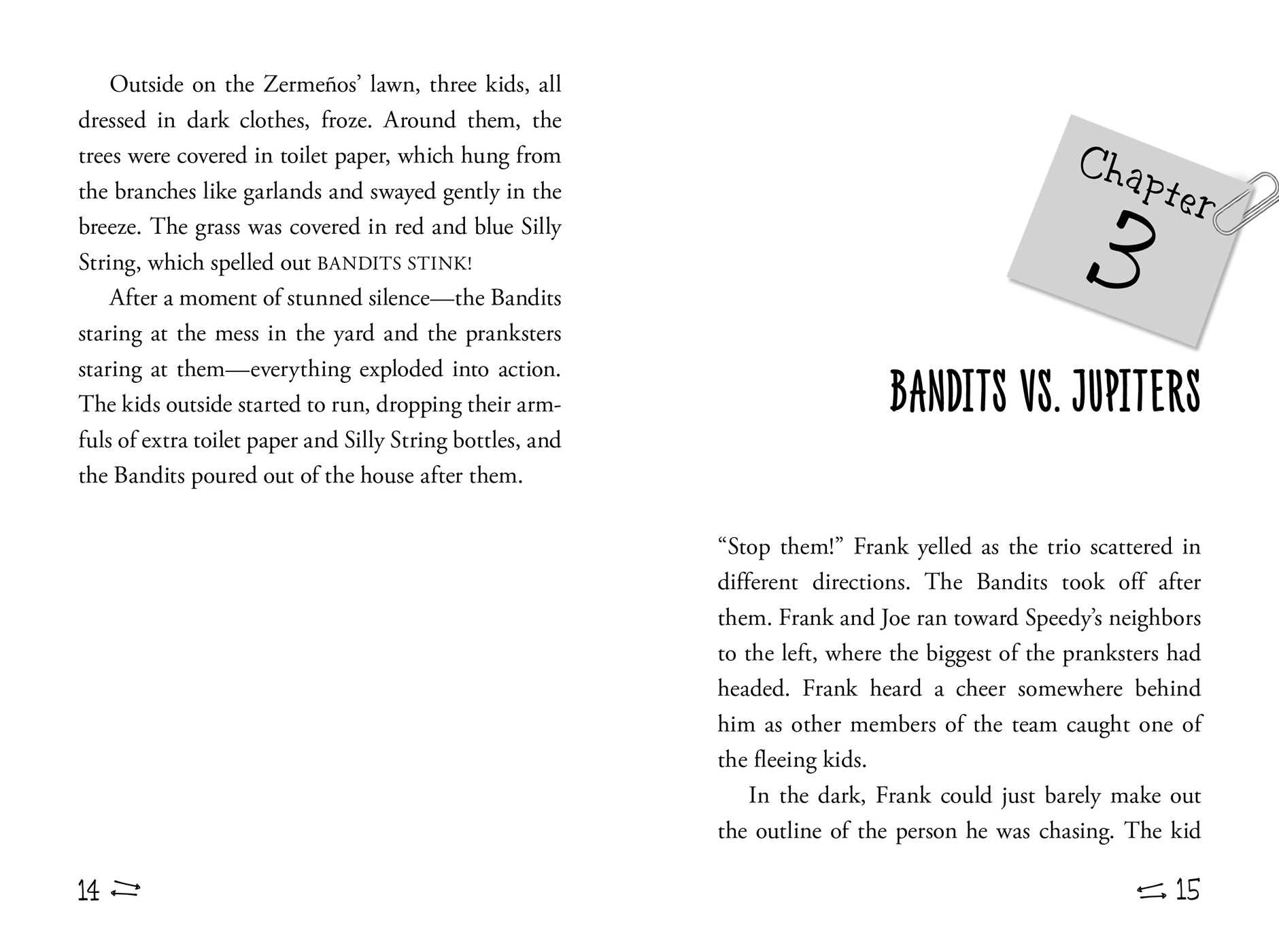 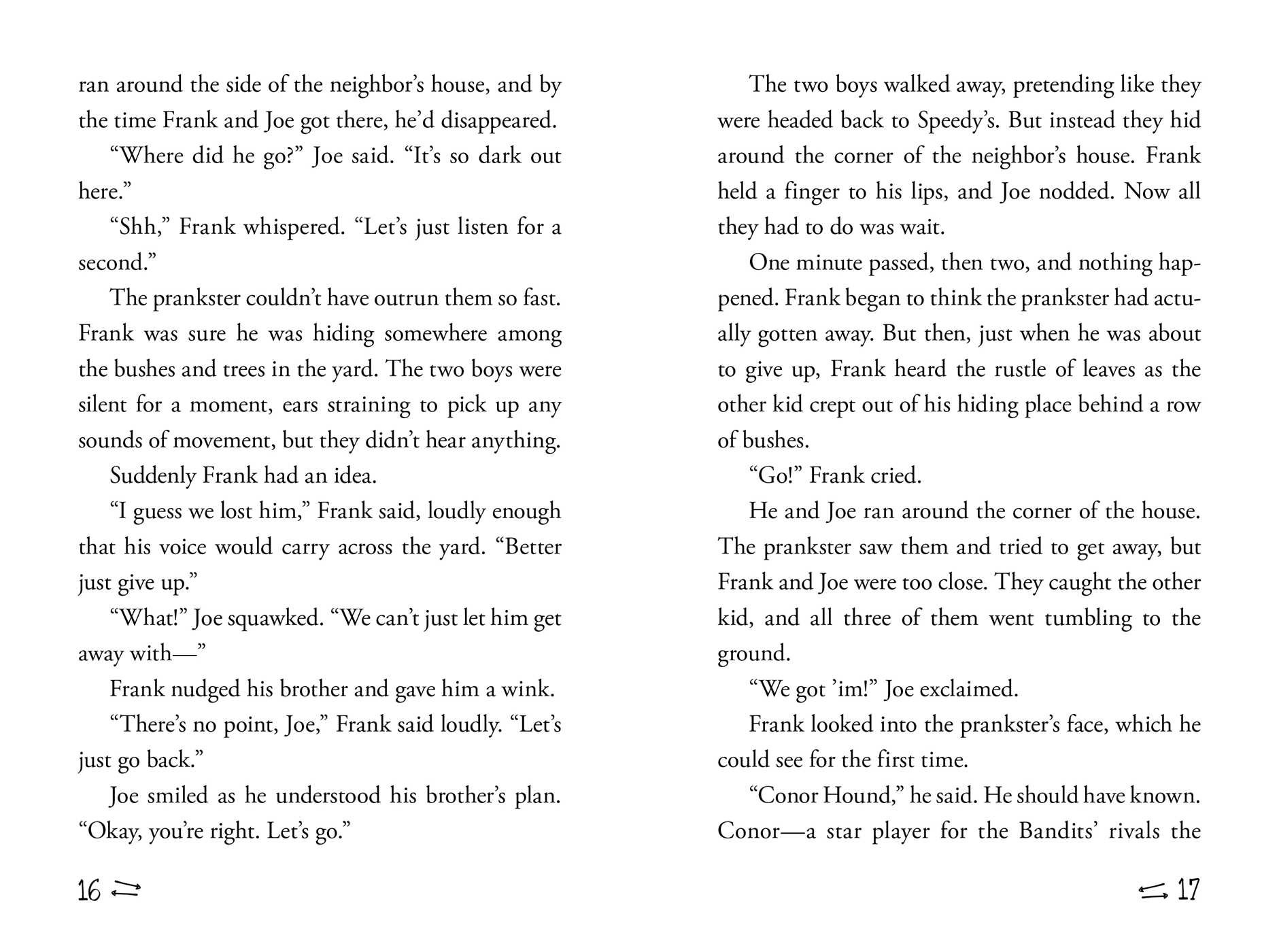 Frank and Joe try to hit a home run by figuring out what happened to the Bayport Bandits’ playbook before the first big baseball game in the second book in an all-new, interactive Hardy Boys chapter book mystery series. Includes space for readers to jot down their own ideas and solutions to the case!

Frank and Joe and the rest of their Bayport Bandits teammates can’t wait for Little League to start! Everyone is celebrating the beginning of the season at Speedy Zermino’s house. While they’re all together, Coach Quinn shows off the Bandit’s new playbook that contains all of the new strategies and plays that will help them to a winning season.

The next day at practice, Coach Quinn realizes the all-important playbook has gone missing! With their teammates counting on them to get the book back, Frank and Joe must take a swing at cracking this case…or their season will be over before it even begins.

Chapter 1 BASEBALL BARBECUE
As soon as his father pulled up to Cissy “Speedy” Zermeño’s house, Joe Hardy threw open the car door and ran up to the house. Frank smiled and rolled his eyes at his eight-year-old younger brother. On the inside, though, Frank was just as excited as Joe was about the party at Speedy’s. The annual Bandit Barbecue dinner meant the beginning of baseball season, his favorite time of year.

Frank grabbed the plate of brownies his mother had made, and his parents followed him up the walkway to the Zermeños’ front door. Joe had already disappeared somewhere inside, and Speedy was waiting at the door to greet them. Speedy’s real name was Cissy, but she got her nickname from how quickly she did everything, from the speed of her legendary fastball to how quickly she talked.

“Great!” Speedy held up her right hand. The last time Frank had seen her in school on Friday, she’d been wearing a brace. But now it was gone. “The-doctor-said-the-sprain—”

Speedy laughed and took a deep breath before she spoke again, more slowly this time. “The doctor said my sprain is almost completely healed. He says I’ll be able to pitch in our first game next week!”

“That’s awesome!” Frank exclaimed. Speedy, along with the rest of the team, had been worried when she’d hurt her wrist in gym class a couple of weeks ago. She was their star pitcher, and without her, they didn’t stand a chance against their rivals the Jupiters.

Frank and Mr. and Mrs. Hardy followed Speedy outside to the backyard, where the barbecue was in full swing. Mr. and Mrs. Hardy stopped to talk to the other parents, while Frank and Speedy went looking for Joe. They found him at the backyard swing set with the Mortons. Frank and Joe’s best friend, Chet, was taking turns pushing his two younger sisters—Iola, who played for the Bandits, and Mimi, who went everywhere Iola did—on the swings. A camera was hanging from a strap around Chet’s neck.

“Hi, Chet,” Frank said. He nodded at the camera. “You taking pictures of the party?”

“Yup!” Chet said. He gave Iola a push and then grabbed his camera, holding it up for Frank to see. “There are so many cool things you can do with this camera!” He began to explain to Frank how all the different buttons worked.

“Chet!” Mimi wailed. Her swing had come to a stop because Chet, distracted by his camera, had forgotten to push her. When Chet had a new hobby, he forgot about everything else.

“Oh, sorry,” he said. He gave her a big push that sent her flying up into the air.

“What’s that on your back, Mimi?” Joe asked.

“My new backpack!” Mimi squealed, kicking her feet to keep the swing going. “Isn’t it cool? It’s got butterflies on it!”

“She’s starting preschool in the fall,” Iola explained. “She’s barely taken that backpack off since Mom bought it for her.”

“Well, I’m starved,” Iola said, hopping off her swing. “Who wants to get a hamburger?”

Everyone else said they were hungry too, except for Chet.

“But I’ll come with you guys,” he said. “I want to take some pictures of the food. Coach Quinn said I could be the team’s official photographer.”

They all got into the line next to the grill. Speedy’s dad was hard at work cooking up hamburgers and hot dogs, moving almost as fast as Speedy did. Standing in front of them in line was Tommy Dawson, who was an outfielder and relief pitcher for the Bandits, and Ezra Moore, who was new to the team.

“It’s so unfair,” Tommy complained to Ezra, loud enough that Frank could hear him. “I thought I was finally going to get to pitch.”

“Sorry, dude,” Ezra said, “but Speedy’s the starting pitcher. You knew Coach Quinn was going to let her pitch as soon as her wrist was healed.”

“She shouldn’t be the starter anyway,” Tommy said. “I’m ten times better than she is. Coach Quinn’s just got it in for me. I’m not going to let Coach get away with this.”

“No way. Forget this stupid team!” Tommy snapped. He stalked off, ignoring Ezra’s attempts to stop him.

Ezra noticed Frank listening in on their conversation.

Frank nodded. He was just glad Speedy hadn’t heard what Tommy was saying.

The kids loaded up their plates with food and sat in the grass with some of the other Bandits to eat. When they were done, someone found a baseball and they started a game of catch. All the younger brothers and sisters of the Bandits players were sitting around Mimi, whose backpack was jammed full of coloring books, stuffed animals, and other toys that she was handing out. They played while the older kids tossed the ball and the parents watched, chatting as they sipped their cups of punch.

Soon it began to grow dark, and the party moved inside. The parents gathered in the kitchen, while the little kids sat in front of the television in the living room to watch a movie. Mimi was among them, her empty backpack slung over her shoulders. While they watched the movie, most of the kids played with one of the toys or coloring books that Mimi had given them.

Meanwhile, Coach Quinn gathered all the Bandits together for a team meeting.

“Thanks for coming, everyone,” she said when the team was sitting before her. “It’s going to be the start of an awesome season, right?”

“Right!” they all chorused. Joe’s voice was the loudest of all, Frank noticed. Coach Quinn’s eyes twinkled. “That’s what I thought. Now, let me show you our new secret weapon.”
Franklin W. Dixon

Matt David part time illustrator full time clue finder, lives and works in San Francisco. He solves mysteries with his trusty pencil and the help of his wife, son, and clever cat.