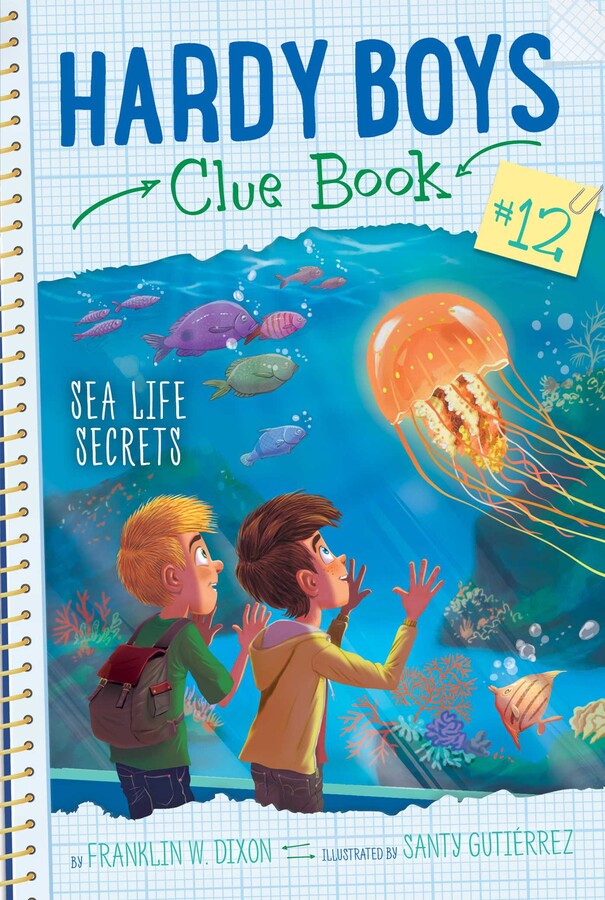 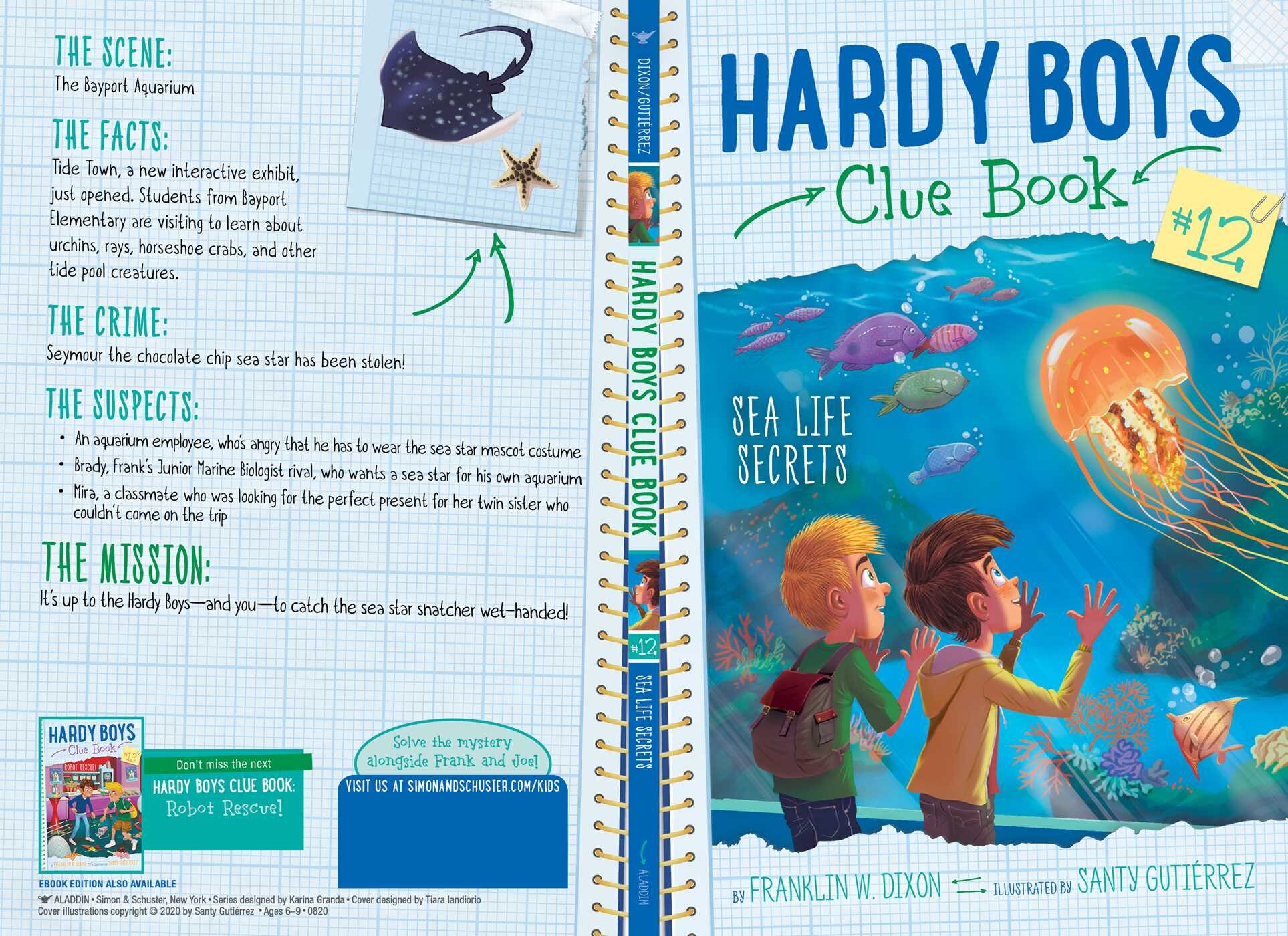 Detective brothers Frank and Joe fish for clues at the Bayport Aquarium in the twelfth book in the interactive Hardy Boys Clue Book series.

Frank and Joe can’t wait for their trip to the Bayport Aquarium. A new tide pool exhibit has just opened where visitors can learn all about horseshoe crabs, rays, jellyfish, and other sea life as they touch and hold the flora and fauna that make up the aquatic ecosystem!

But in the middle of the presentation, an aquarium worker realizes that one of the creatures has gone missing from the tank. It can’t survive for long outside the water, and the clock is ticking.

Can the Hardy Boys follow the clues and find the culprit before the new exhibit sinks?

Chapter 1: Into the Deep INTO THE DEEP
“Sea creatures rule!” nine-year-old Frank Hardy shouted, hopping off the school bus in front of the Bayport Aquarium.

“Follow me, kids! We don’t want to be late for our tour of Tide Town!” Frank’s science teacher, Ms. Klinger, called out as the rest of the Bayport Elementary School third and fourth graders joined the packed crowd in front of the aquarium.

A large banner above the entrance announced the TIDE TOWN GRAND OPENING along with pictures of starfish, sea urchins, horseshoe crabs, rays, and some of the other creatures featured in the aquarium’s brand-new touch pool exhibit.

“This is one of the coolest field trips ever!” Frank’s younger brother, Joe, said, following Ms. Klinger and the other chaperones toward the banner. “I hope we get to touch a shark.”

“I don’t think the Tide Town exhibit has any sharks, but it does have rays, and they’re related to sharks.” Frank pointed out the creature on the Tide Town banner. “They’re kind of like flattened sharks, with fins that look like wings, and long, pointy tails.”

“Rays, skates, and sharks are all members of the same group of fish called elasmobranch,” a kid with curly hair, a neon-green T-shirt, and blue-framed glasses chimed in, pushing his way between Frank and Joe as they entered the aquarium. “They don’t have bones like regular fish. Their skeletons are made out of cartilage instead. That’s the same stuff as our noses!”

“I knew that,” Frank mumbled.

Frank was one of Ms. Klinger’s best science students, and there was only one classmate who could out-fact him when it came to marine biology: Brady Jordan. Brady carried a sketchbook filled with drawings of sea life in one hand and a lunch box designed to look just like a fish tank in the other.

“Speaking of rays, there’s one now.” Joe pointed to a six-foot-tall walking ray with a giant cartoon grin, taking pictures with kids from another school. “I didn’t know they had legs, though.”

“That’s Reggie the Ray. He’s one of the new mascots the aquarium unveiled for Tide Town’s grand opening.” Frank looked around the lobby. “There’s another one named Seymour the Sea Star, but I don’t see him. They’re both named after real creatures in the exhibit.”

Reggie waved back with one of his oversize wings.

“I’m going to have a real ray and all kinds of other cool creatures as soon as I convince my parents to buy me a home aquarium,” Brady boasted. “I might even make my own touch pool.”

As the group followed the signs toward Tide Town, a classmate with a ponytail and wearing a T-shirt with a glittery green dragon on it dropped back to join the conversation.

“Your parents are still saying no, huh, Brady?” she asked. It wasn’t any surprise that Brady wanted a home aquarium. He talked about it all the time.

“Oh. Hi, Mira. They’re saying no for now, but if I bug them enough, they’ll have to agree.”

“Avery is totally obsessed with her fish tank.” Mira frowned. “I wish she were here to see Tide Town too.”

“It stinks that your sister had her tonsils out right before our field trip,” Joe said. “Avery’s the only other person at school who gets as excited about this marine bio stuff as Brady and my bro.”

“Yeah, I don’t love fish so much, but I do love my twin sis.” Mira put her hands together to make a heart shape. “I’m going to find the best souvenir in the whole aquarium to bring home for her so she doesn’t feel left out.”

“How come you’re not excited about Tide Town? Aren’t twins supposed to like all the same things?” Brady asked.

“We’re not identical twins. We don’t even look the same. Even if we did, every twin has their own special personality. And I definitely won’t be petting any slimy sea creatures.” Mira shuddered. “I am excited to see the penguins, though. They’re the cutest.”

This time it was Brady who shuddered. “No thanks! My appreciation of sea life doesn’t include flightless seabirds.”

“But everybody likes penguins!” Frank insisted. “Ms. Klinger said we can explore on our own after Tide Town, and feeding time at the penguin exhibit is at the top of our list.”

He pulled out a map of the aquarium and pointed to the outdoor penguin exhibit circled in orange marker. It was on the other side of the rain-forest exhibit on the level below Tide Town, circled in blue.

Brady started to turn red. “I’m—I’m afraid of penguins. It’s a real phobia some people have.”

“That’s okay, Brady. Everybody’s afraid of something.” Joe put a friendly hand on Brady’s shoulder as they walked past the entrance to Shark Row. “Like me, I’m afraid of—AAAHHHHHHH!”

Joe suddenly let out a terrified scream. A real one! They were being attacked by a giant sea creature!

Santy Gutierrez resides in the seaside city of La Coruña, Spain. He has won acclaim as the Best Spanish Young Editorial Cartoonist and Best Galician Caricaturist, among others.