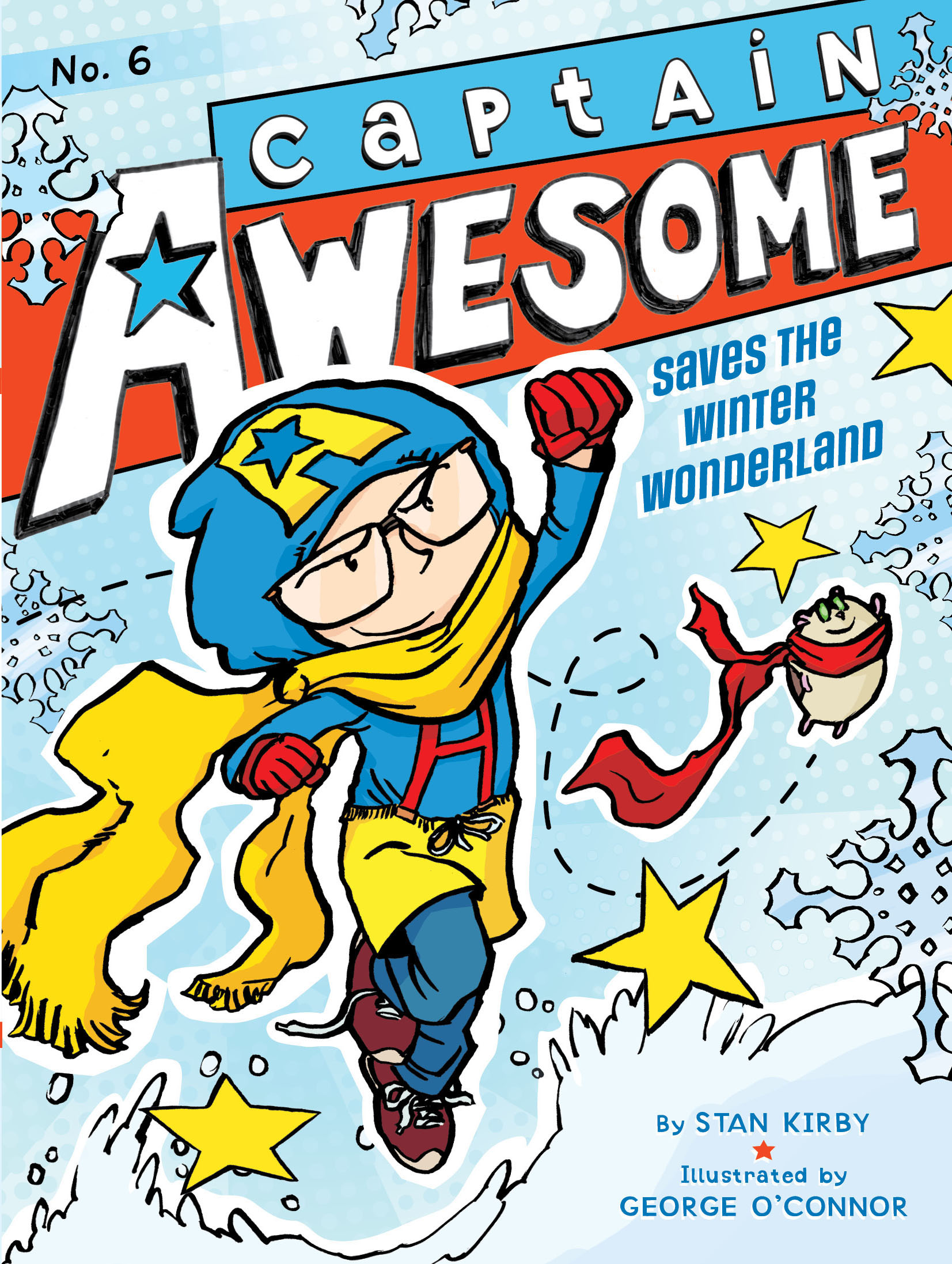 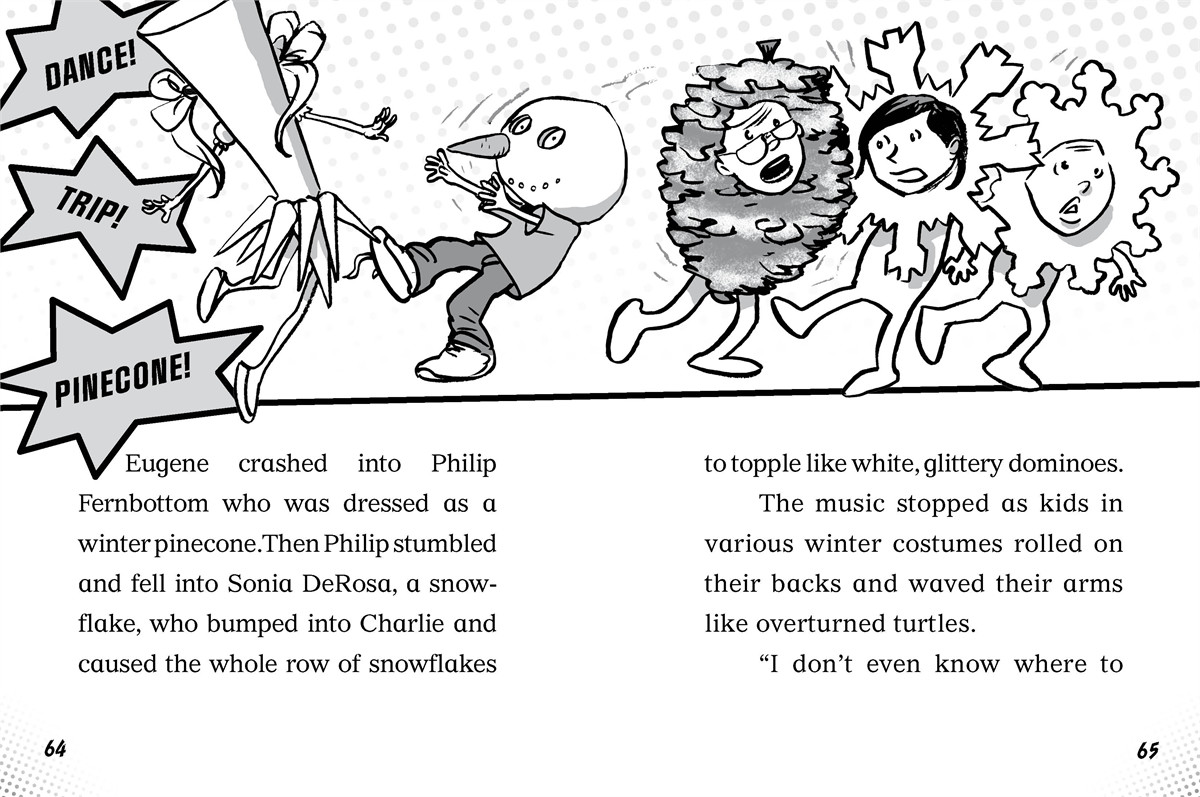 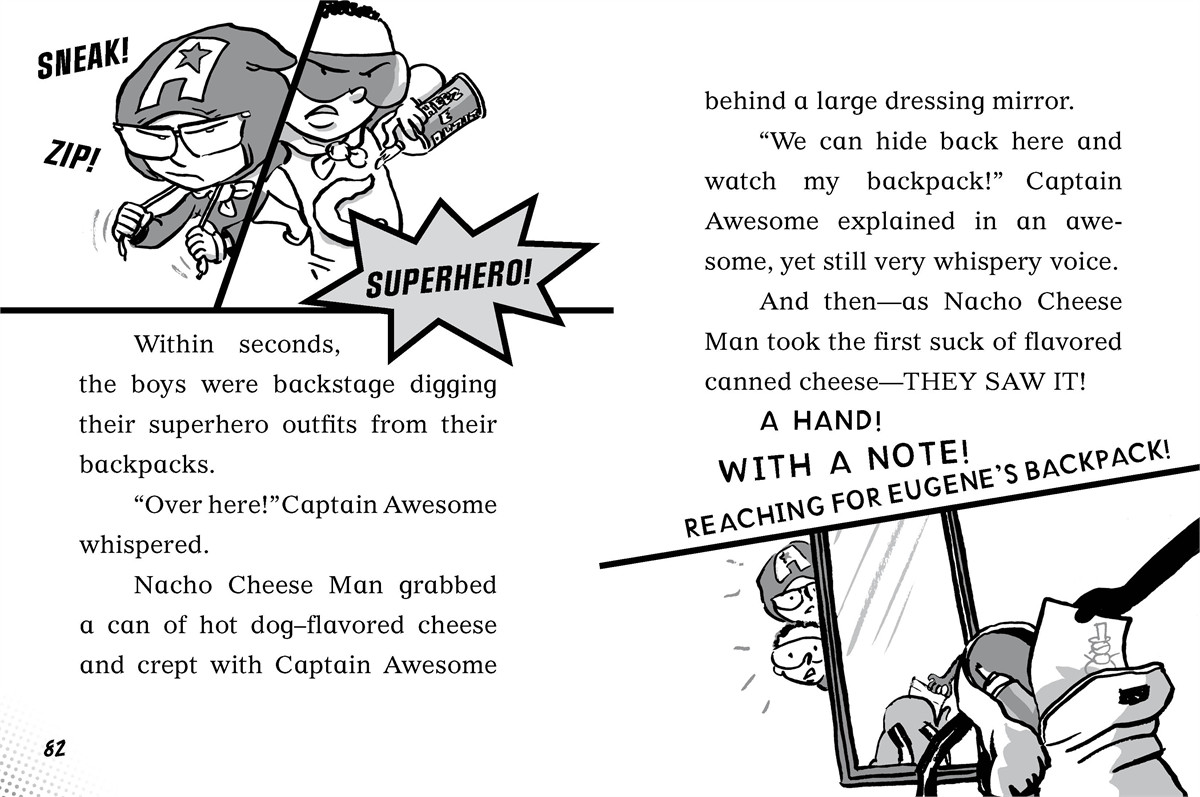 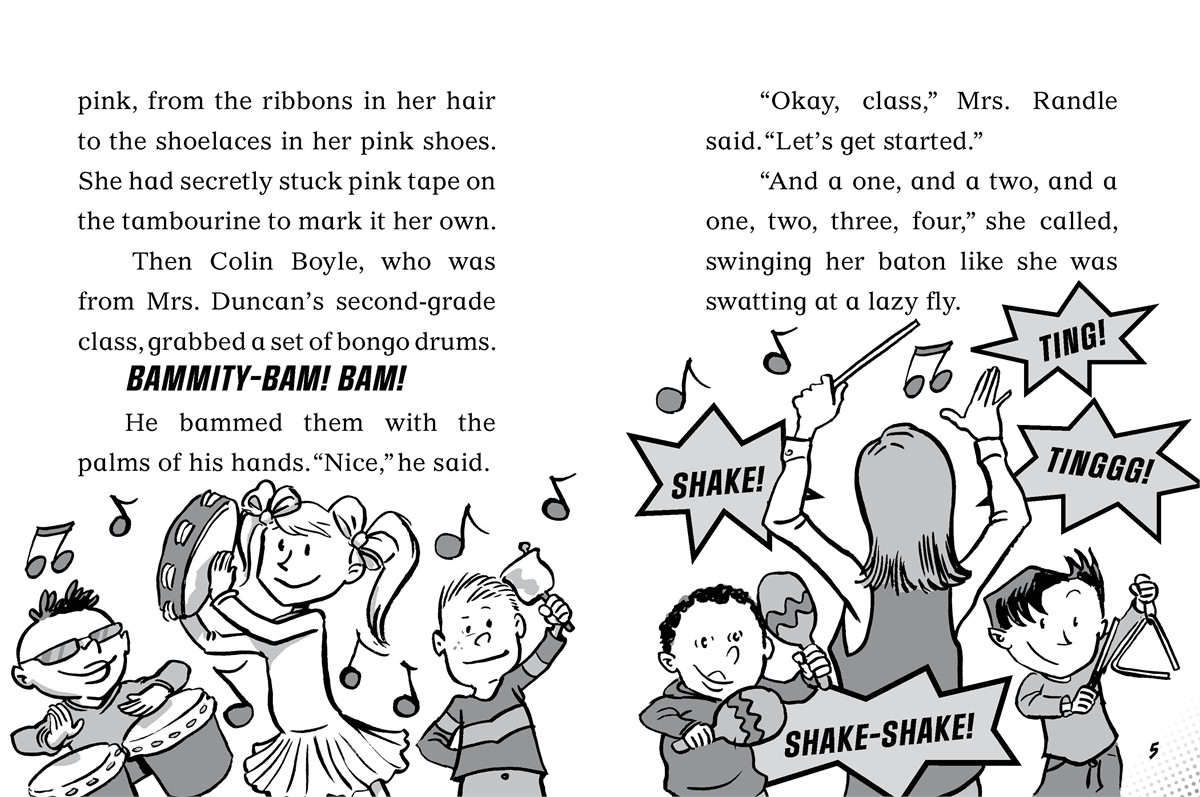 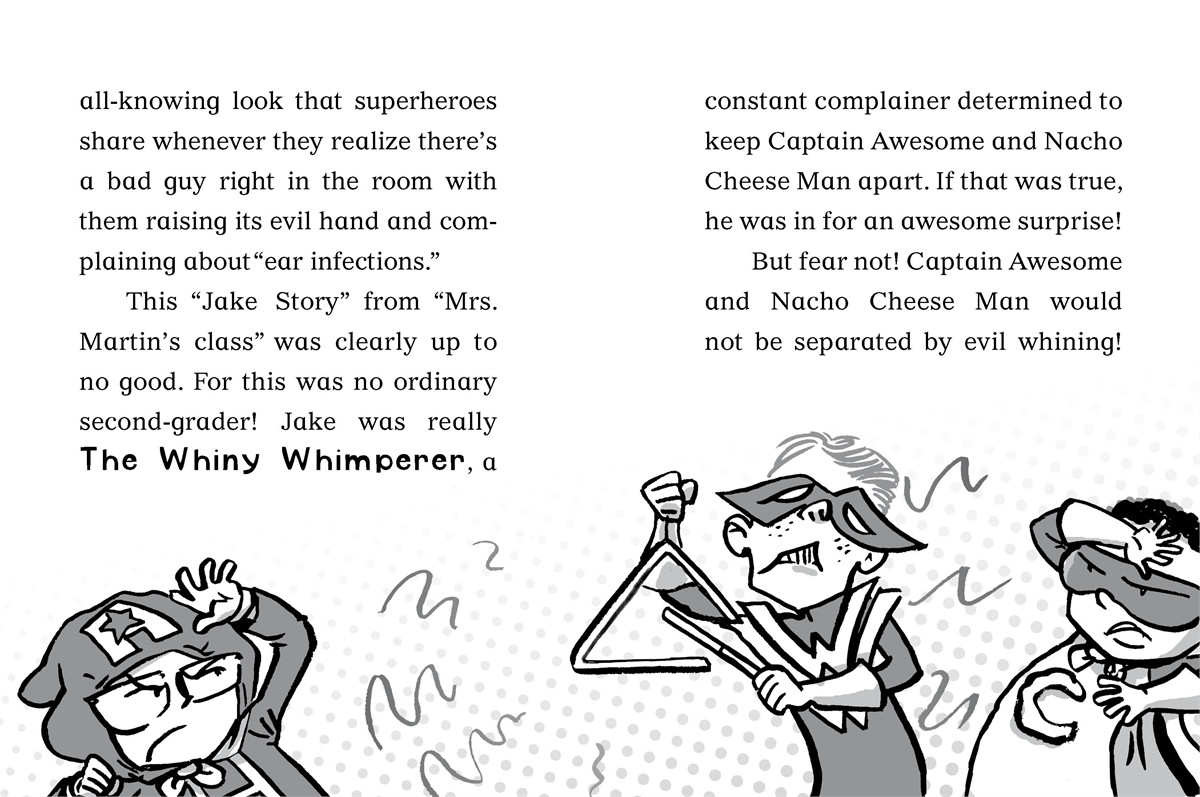 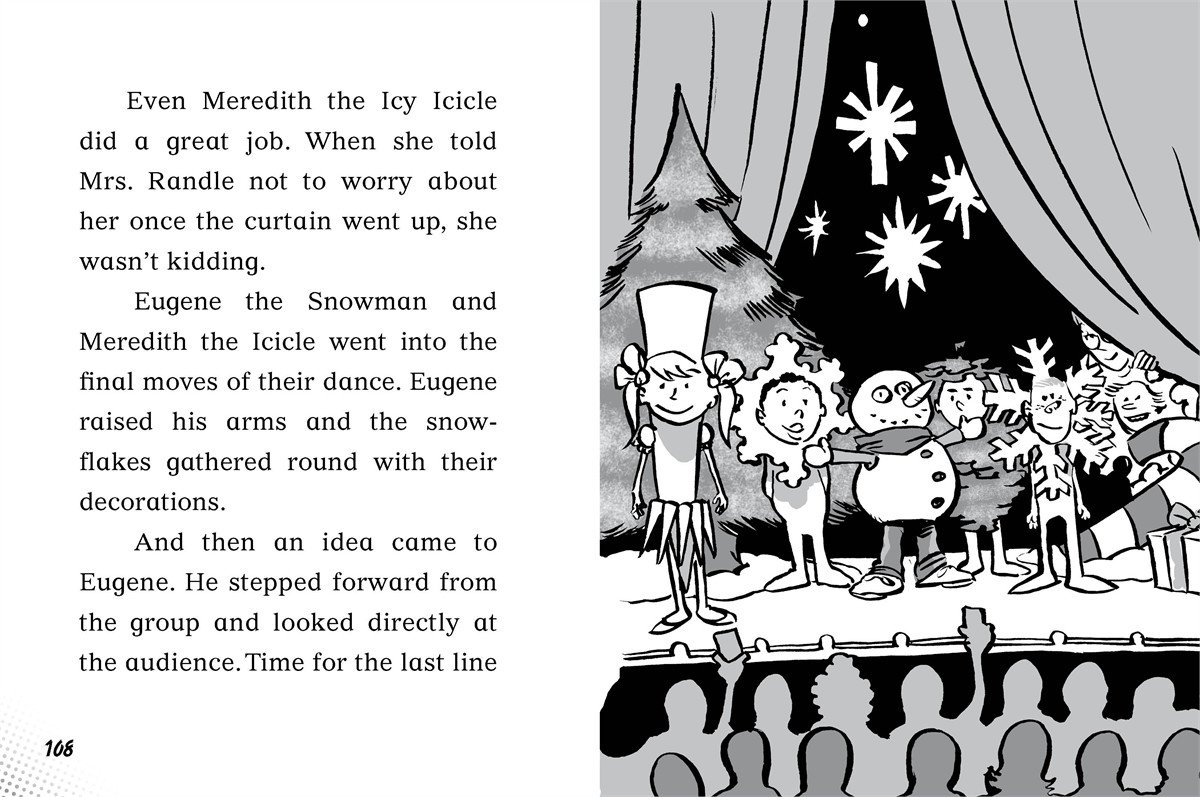 A new villain threatens to put “the big freeze” on the second grade’s holiday play. Can the Sunnyview Superhero Squad save the show?

Eugene and Charlie can hardly wait for Sunnyview Elementary’s holiday spectacular, “The Winter Wonderland.” These superhero pals are prepared to give it all they’ve got as members of the Snowflake Symphony. MI-TEE!
Captain Awesome and Nacho Cheese Man’s superhero skills are called into action when an all-new villain threatens to ruin the second graders’ performance. Can the Sunnyview Superhero Squad save the show?
With easy-to-read text and illustrations on almost every page, the Captain Awesome chapter books are perfect for beginning readers!

“I love to play the triangle!” Eugene McGillicudy yelled out in a very heroic voice. In Mrs. Randle’s music class, Eugene always went for the triangle. “I like any musical instrument that’s shaped like a slice of pizza!”

“Keep your triangle,” said Eugene’s best friend, Charlie Thomas Jones. “I like the maracas. I don’t know what’s inside, but I hope it’s dried bugs.”

Every Thursday morning, Sunnyview Elementary School’s music teacher, Mrs. Randle, passed out an assortment of xylophones, tambourines, recorders, cowbells, bongo drums, and more to all the second graders in her music room.

Eager students from different classes grabbed them like free chocolate, and sang and played under Mrs. Randle’s waving baton.

“Cowbell!” cried Evan Mason as he grabbed one from the stack.

“I’m getting the tambourine!” yelled Meredith Mooney, dressed in pink, from the ribbons in her hair to the shoelaces in her pink shoes. She had secretly stuck pink tape on the tambourine to mark it her own.

Then Colin Boyle, who was from Mrs. Duncan’s second-grade class, grabbed a set of bongo drums.

He bammed them with the palms of his hands. “Nice,” he said.

“And a one, and a two, and a one, two, three, four,” she called, swinging her baton like she was swatting at a lazy fly.

Eugene tinged and Charlie shook, because superheroes who step in front of danger aren’t afraid to make as much crazy loud music as possible. Just like that time Super Dude fought his musical enemy, Trouble Clef, and knocked the musical scales right off his slide trombone.

You’ve never heard of Super Dude? Really?! Have you never been to a comic book store? Do you not watch cartoons on television? Do you not have the limited edition Super Dude Wristwatch?

Super Dude was absolutely the greatest superhero ever—he was also the star of a number of comic books. Eugene had boxes of them under his bed. And in his closet. And stacked in the corner. Following Super Dude’s example, Eugene created his own costume and became . . .

Along with his best friend, Charlie, also known as the superhero Nacho Cheese Man, he formed the Sunnyview Superhero Squad to stop evil from eviling in Sunnyview.

This was good because Eugene and Charlie lived in Sunnyview and there was a surprising amount of eviling going on.

But so far, at least for today, Charlie and Eugene hadn’t seen any bad guys at Sunnyview Elementary School—just the happy, loud sounds of a triangle and a set of maracas.

“Can we please stop all that noise?” asked the awful My! Me! Mine! Mere-DITH Mooney. The pink ribbons in her hair were tied in perfect bows. Her pink bows were perfect like the grades she expected on her report card.

Meredith had a lot of rules and one of them was about noise. “Noise,” she always said to Eugene, “is noisy. And I doubt there’s anything more noisy than you.”

“Mrs. Randle, I can’t concentrate on my tambourine if Barfgene and Charlie Thomas Bonehead keep making those awful sounds.”

“Is she talking about us?” Charlie whispered to Eugene.

“Bad guys always complain about superheroes,” Eugene whispered back. Meredith was not only the pink Mooney who complained about everything, but she was also Captain Awesome’s archenemy, Little Miss Stinky Pinky!

“Well, that’s what she thinks!” Eugene replied. “No evil is going to knock the notes off our scales today!”

Stan Kirby tied a beach towel around his neck and became Super Commander Beach Boy when he was six years old. When Stan’s not creating the awesome adventures of Captain Awesome, he loves reading comic books, eating okra, and hang gliding (but not at the same time).