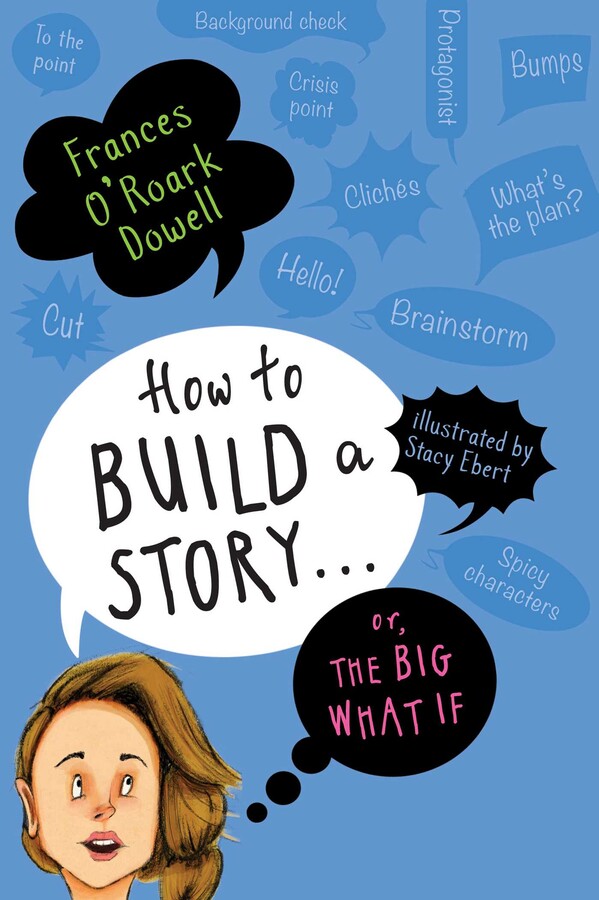 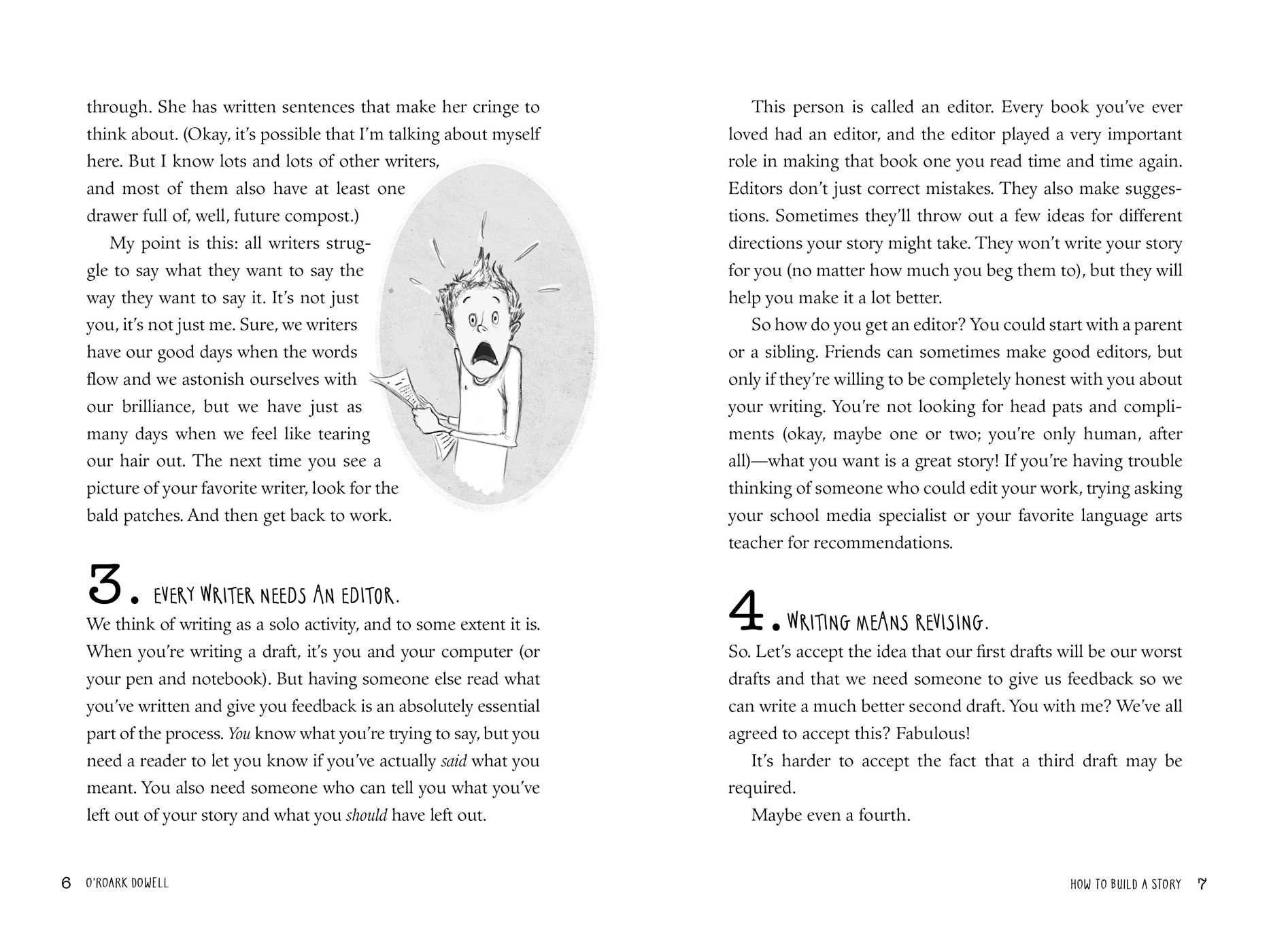 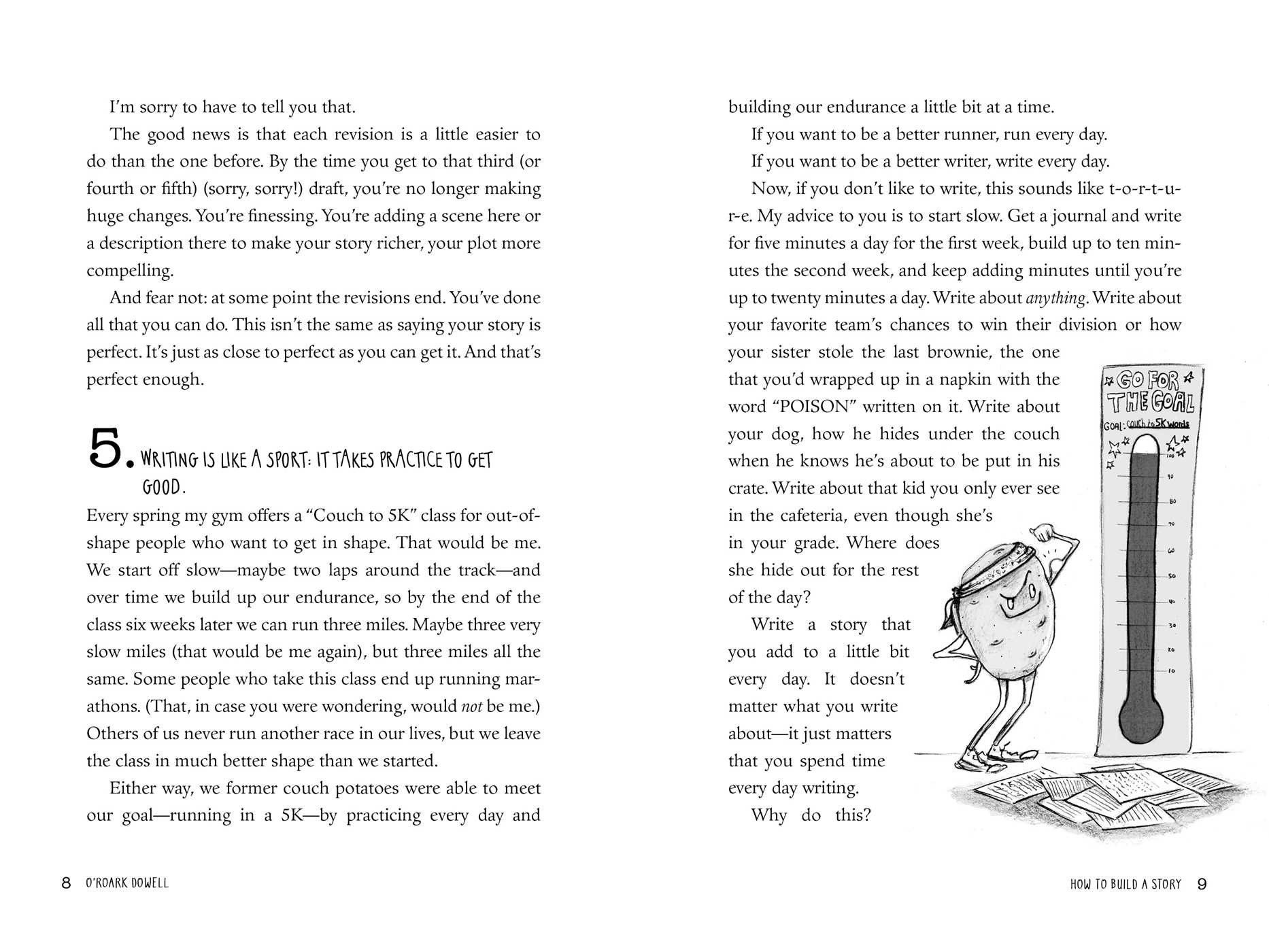 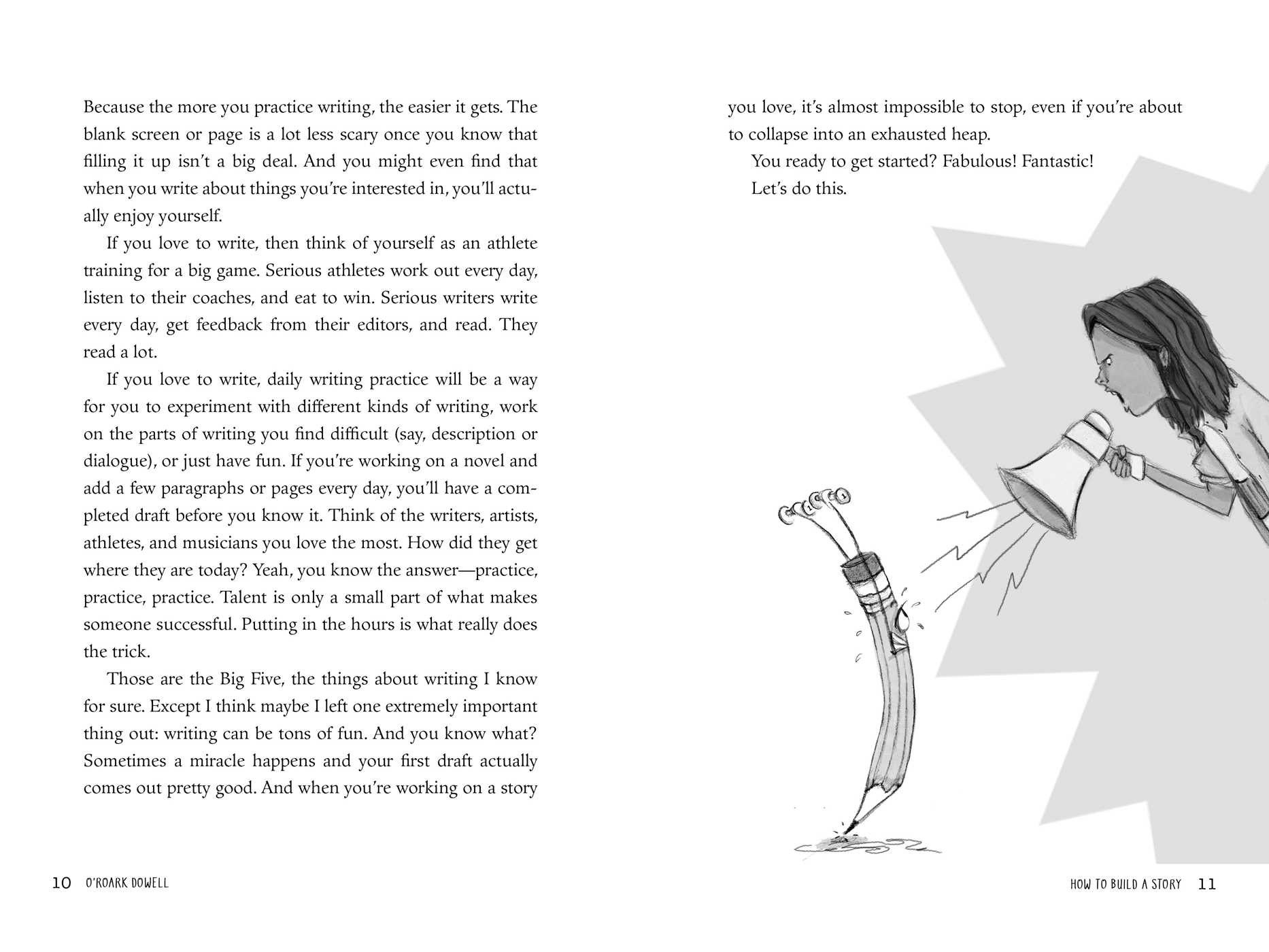 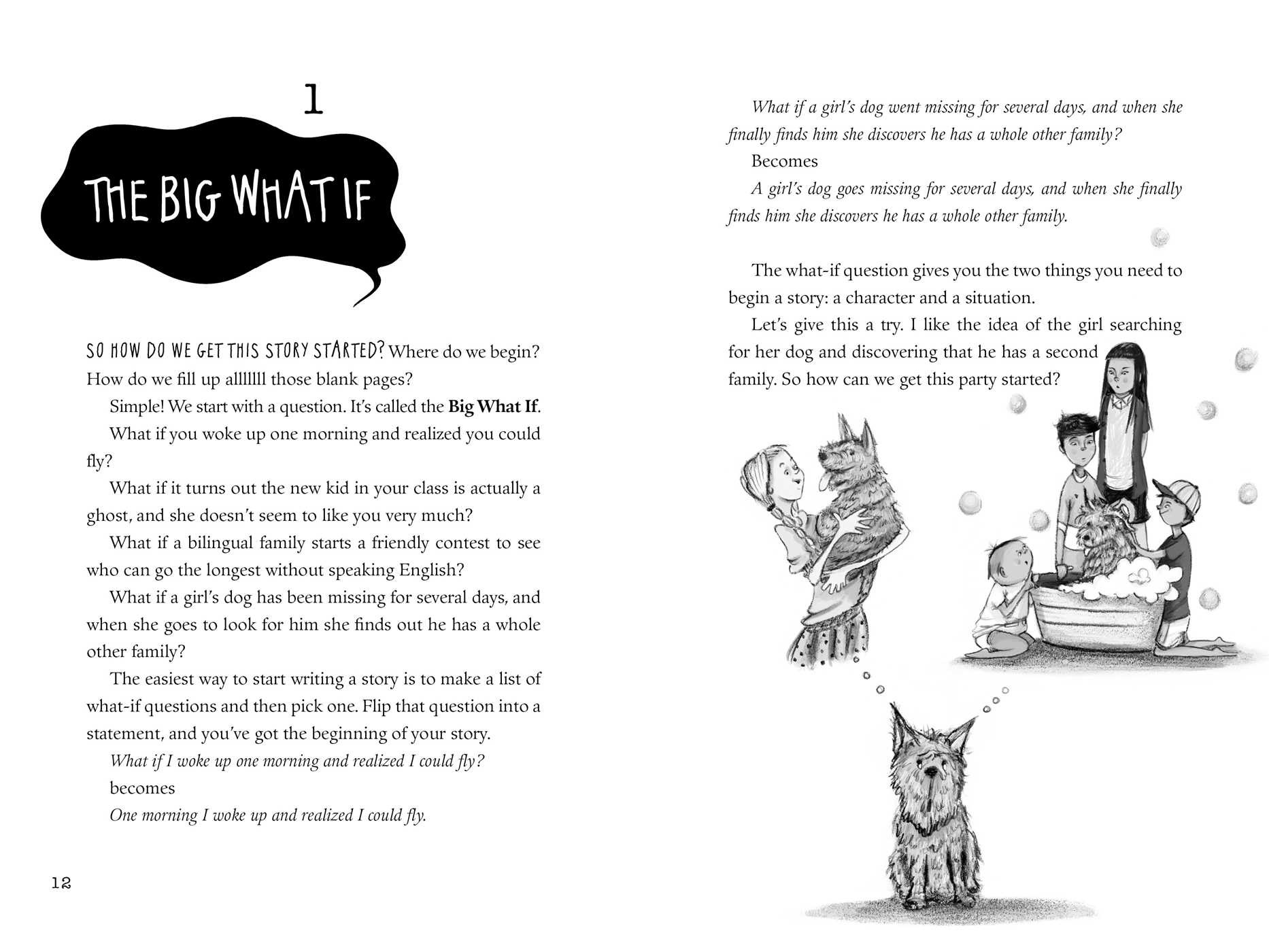 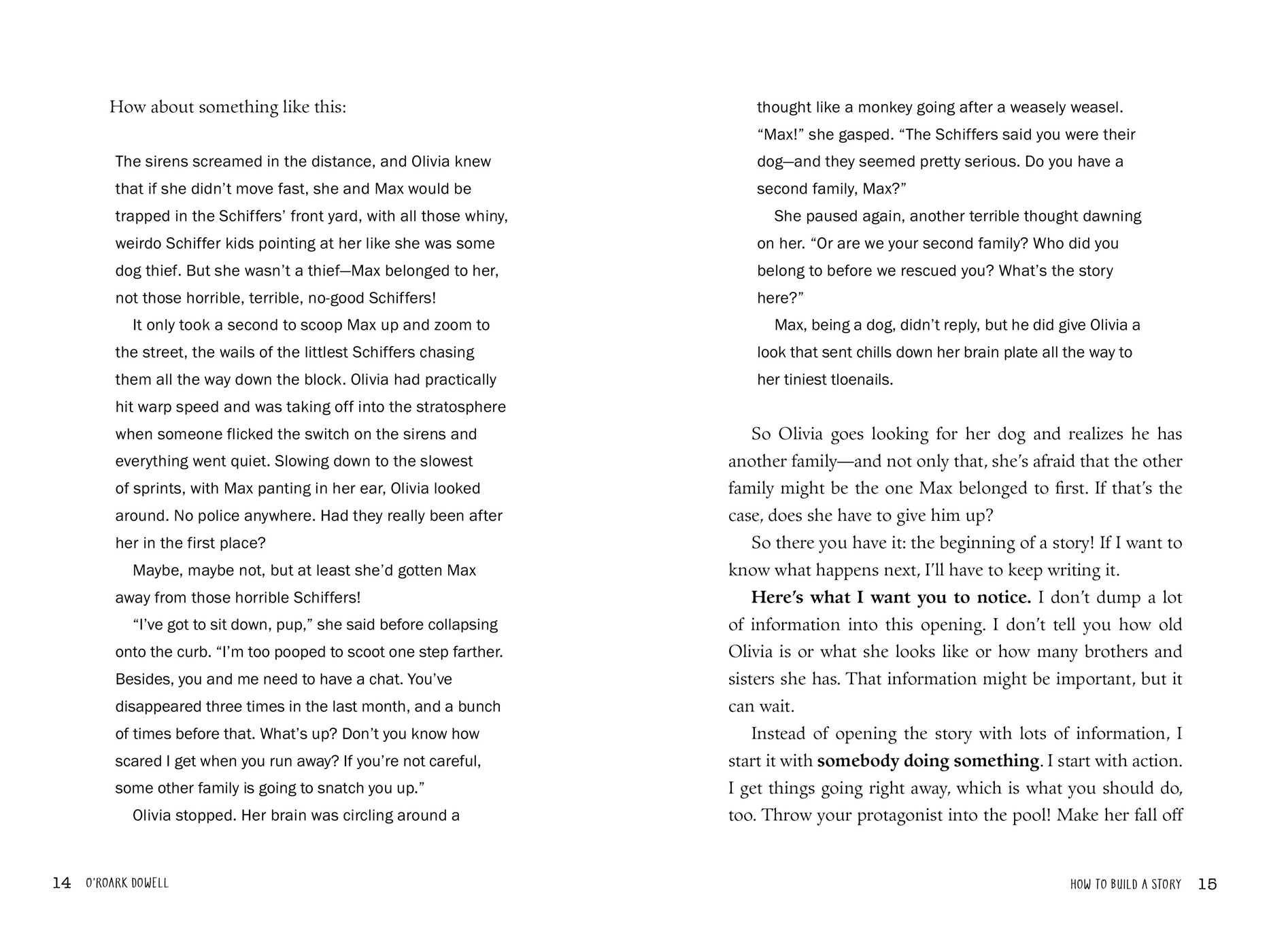 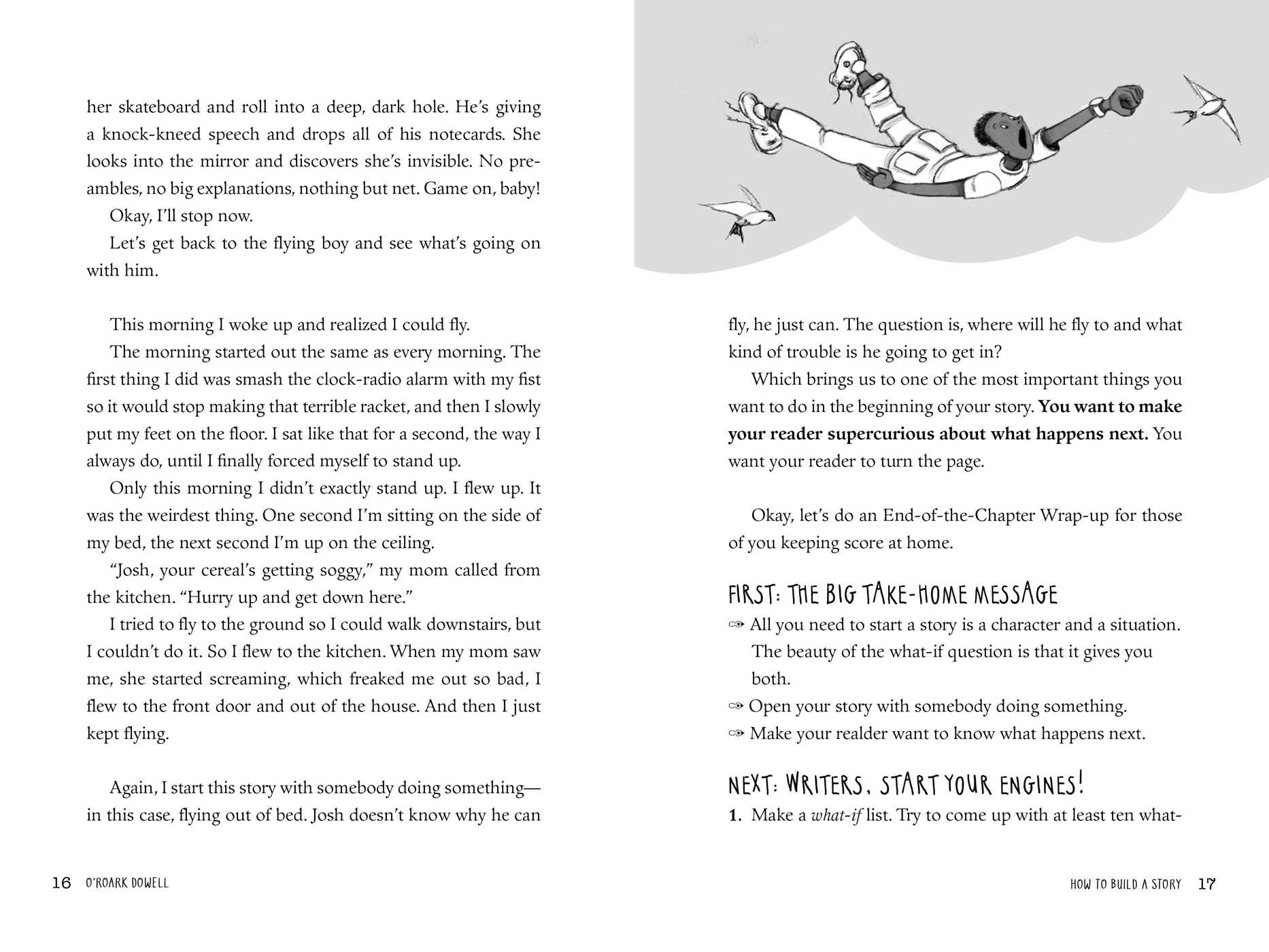 From bestselling author Frances O’Roark Dowell comes a fresh and accessible guide to storytelling that breaks down the sometimes-daunting writing process into straightforward, doable steps, just right for budding writers!

If you’ve written anything, ever, you’re already a writer—so, congratulations! As many aspiring authors know, though, telling an actual, complete story is, well, a different story.

As unfinished drafts pile up and writers’ block strikes, it may start to feel like there’s a special formula to finishing a project that you’re just not getting. But crafting a story isn’t magic, if you have a little know-how! And here it is—know-how! In her witty, clever way, critically acclaimed author Frances O’Roark Dowell explains the storytelling process with simple, easy-to-understand steps. Follow along as she shares sample stories and identifies building blocks and obstacles to conquer—all hilariously illustrated, in a way that’ll have you typing all the way to the end of your own story.

In addition to writing many books including Shooting the Moon and Dovey Coe, Frances O’Roark Dowell has over a decade’s experience teaching writing workshops for kids. Ready, set, write!

Chapter 1: The Big What If

1 THE BIG WHAT IF
SO HOW DO WE GET this story started? Where do we begin? How do we fill up alllllll those blank pages?

Simple! We start with a question. It’s called The Big What If.

What if you woke up one morning and realized you could fly?

What if it turns out the new kid in your class is actually a ghost, and she doesn’t seem to like you very much?

What if a bilingual family starts a friendly contest to see who can go the longest without speaking English?

What if a girl’s dog went missing for several days, and when she finally finds him she discovers he has a whole other family?

The easiest way to start writing a story is to make a list of what-if questions and then pick one. Flip that question into a statement, and you’ve got the beginning of your story.

What if I woke up one morning and realized I could fly?

One morning I woke up and realized I could fly.

What if a girl’s dog went missing for several days, and when she finally finds him she discovers he has a whole other family?

A girl’s dog goes missing for several days, and when she finally finds him she discovers he has a whole other family.

The what-if question gives you the two things you need to begin a story: a character and a situation.

Let’s give this a try. I like the idea of the girl searching for her dog and discovering that he has a second family. So how can we get this party started?

The sirens screamed in the distance, and Olivia knew that if she didn’t move fast, she and Max would be trapped in the Schiffers’ front yard, with all those whiny, weirdo Schiffer kids pointing at her like she was some dog thief. But she wasn’t a thief—Max belonged to her, not those horrible, terrible, no-good Schiffers!

It only took a second to scoop Max up and zoom to the street, the wails of the littlest Schiffers chasing them all the way down the block. Olivia had practically hit warp speed and was taking off into the stratosphere when someone flicked the switch on the sirens and everything went quiet. Slowing down to the slowest of sprints, with Max panting in her ear, Olivia looked around. No police anywhere. Had they really been after her in the first place?

Maybe, maybe not, but at least she’d gotten Max away from those horrible Schiffers!

“I’ve got to sit down, pup,” she said before collapsing onto the curb. “I’m too pooped to scoot one step farther. Besides, you and me need to have a chat. You’ve disappeared three times in the last month, and a bunch of times before that. What’s up? Don’t you know how scared I get when you run away? If you’re not careful, some other family is going to snatch you up.”

Olivia stopped. Her brain was circling around a thought like a monkey going after a weasely weasel. “Max!” she gasped. “The Schiffers said you were their dog—and they seemed pretty serious. Do you have a second family, Max?”

She paused again, another terrible thought dawning on her. “Or are we your second family? Who did you belong to before we rescued you? What’s the story here?”

Max, being a dog, didn’t reply, but he did give Olivia a look that sent chills down her brain plate all the way to her tiniest toenails.

So Olivia goes looking for her dog and realizes he has another family—and not only that, she’s afraid that the other family might be the one Max belonged to first. If that’s the case, does she have to give him up?

So there you have it: the beginning of a story! If I want to know what happens next, I’ll have to keep writing it.

Here’s what I want you to notice. I don’t dump a lot of information into this opening. I don’t tell you how old Olivia is or what she looks like or how many brothers and sisters she has. That information might be important, but it can wait.

Instead of opening the story with lots of information, I start it with somebody doing something. I start with action. I get things going right away, which is what you should do, too. Throw your protagonist into the pool! Make her fall off her skateboard and roll into a deep, dark hole. He’s giving a knock-kneed speech and drops all of his notecards. She looks into the mirror and discovers she’s invisible. No preambles, no big explanations, nothing but net. Game on, baby!

Let’s get back to the flying boy and see what’s going on with him.

This morning I woke up and realized I could fly.

The morning started out the same as every morning. The first thing I did was smash the clock-radio alarm with my fist so it would stop making that terrible racket, and then I slowly put my feet on the floor. I sat like that for a second, the way I always do, until I finally forced myself to stand up.

Only this morning I didn’t exactly stand up. I flew up. It was the weirdest thing. One second I’m sitting on the side of my bed, the next second I’m up on the ceiling.

“Josh, your cereal’s getting soggy,” my mom called from the kitchen. “Hurry up and get down here.”

I tried to fly to the ground so I could walk downstairs, but I couldn’t do it. So I flew to the kitchen. When my mom saw me, she started screaming, which freaked me out so bad, I flew to the front door and out of the house. And then I just kept flying.

Again, I start this story with somebody doing something—in this case, flying out of bed. Josh doesn’t know why he can fly, he just can. The question is, where will he fly to and what kind of trouble is he going to get in?

Which brings us to one of the most important things you want to do in the beginning of your story. You want to make your reader supercurious about what happens next. You want your reader to turn the page.

Okay, let’s do an End-of-the-Chapter Wrap-up for those of you keeping score at home.
FIRST: THE BIG TAKE-HOME NEXT: WRITERS, START YOUR ENGINES! FINALLY: LET’S WRITE!
You get the picture. Write a scene that gets the story going and makes your reader eager to know what happens next!

Protago-what? If this is a new one for you, let me explain… In this chapter, we met two characters: Olivia and Josh. They’re the main characters in their stories, the stars of their shows.

Other terms for protagonist include hero, central character, and lead character.

Frances O’Roark Dowell is the bestselling and critically acclaimed author of Dovey Coe, which won the Edgar Award and the William Allen White Award; Where I’d Like to Be; The Secret Language of Girls and its sequels The Kind of Friends We Used to Be and The Sound of Your Voice, Only Really Far Away; Chicken Boy; Shooting the Moon, which was awarded the Christopher Award; the Phineas L. MacGuire series; Falling In; The Second Life of Abigail Walker, which received three starred reviews; Anybody Shining; Ten Miles Past Normal; Trouble the Water; the Sam the Man series; The Class; and most recently, How to Build a Story. She lives with her family in Durham, North Carolina. Connect with Frances online at FrancesDowell.com.

Stacy Ebert is an illustrator and writer for children. She’s been creating art since she was young and has worked as a graphic designer. She wrote for her college newspaper and Her Voice magazine and penned a memoir before turning to picture book stories. If not illustrating, writing, telling, or reading a story—you might find her pressing dough, painting, teaching, or chalk labeling anything and everything. She creates on the prairie with her husband, three sons, one painted piano, and three coral peonies. Visit her online at StacyEbert.com.

SEE ALL
See more by Frances O'Roark Dowell
Thank you for signing up, fellow book lover!