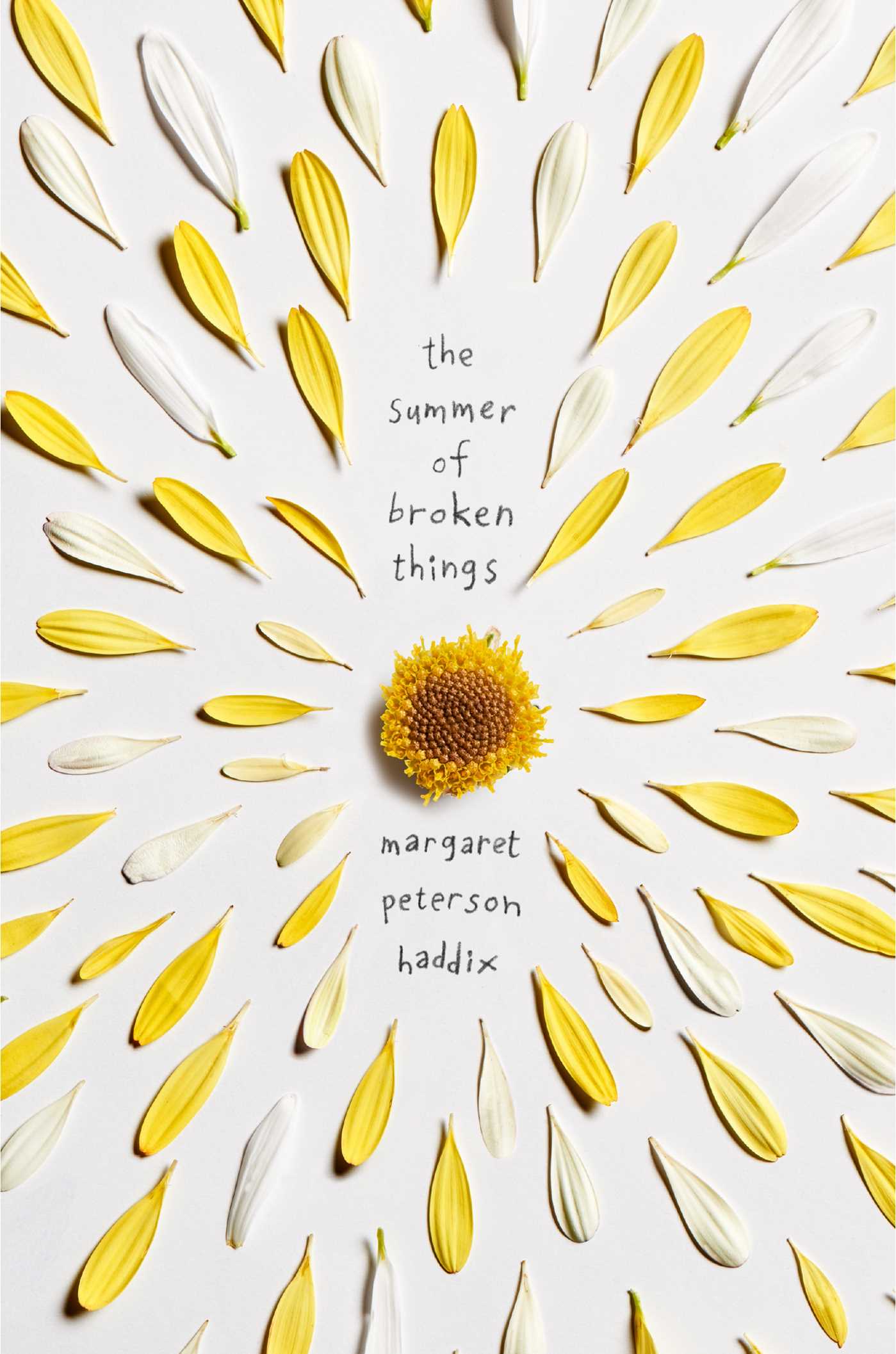 The Summer of Broken Things

From New York Times bestselling author Margaret Peterson Haddix comes a haunting novel about friendship and what it really means to be a family in the face of lies and betrayal.

Fourteen-year-old Avery Armisted is athletic, rich, and pretty. Sixteen-year-old Kayla Butts is known as “butt-girl” at school. The two girls were friends as little kids, but that’s ancient history now. So it’s a huge surprise when Avery’s father offers to bring Kayla along on a summer trip to Spain. Avery is horrified that her father thinks he can choose her friends—and make her miss soccer camp. Kayla struggles just to imagine leaving the confines of her small town.

But in Spain, the two uncover a secret their families had hidden from both of them their entire lives. Maybe the girls can put aside their differences and work through it together. Or maybe the lies and betrayal will only push them—and their families—farther apart.

Margaret Peterson Haddix weaves together two completely separate lives in this engaging novel that explores what it really means to be a family—and what to do when it’s all falling apart.

The Summer of Broken Things How It Begins for Avery
“We need to talk,” Dad says.

He’s got his hand on the door to the garage when I walk into the kitchen for breakfast. He’s wearing his Important Business Deal suit, with the power tie I gave him last year for Father’s Day. (Mom picked it out. Of course she wouldn’t trust my fashion sense.) And, yes—there—he glances at his watch.

“Oh, sorry,” I say, flipping my messy just-out-of-bed ponytail over my shoulder. I add an eye roll for effect. “I didn’t get the memo from your administrative assistant. Did we have a meeting scheduled this morning?”

“Avery,” Dad says, and I’ve succeeded. There’s an edge of helplessness in his voice, a hint of How is it that I can negotiate multimillion-dollar deals practically in my sleep, but I can’t get my fourteen-year-old daughter to treat me with respect?

I just have to be careful not to push him into You know, my parents spanked me when I was a kid, and that kept me from back-talking them . . . and I did three hours of farm chores every morning before school . . . and even though we didn’t have two pennies to rub together, we had one another, and that’s all we needed . . .

For the record, my parents have never spanked me, and never would.

And Mom would never allow Dad to force me to do farm chores, even if we lived on a farm.

“About this summer,” Dad says, and I regret the eye roll.

“Yes?” I say cautiously. I can hear in my head how my friends would tell me to play it: Beg. Or go over and kiss your daddy on the cheek and throw your arms around his shoulders and tell him, “You’re the best dad in the world! You decided I can go with Lauren and Shannon to soccer camp for the whole summer, right?” And then he’s got no choice. He has to agree.

That kind of thing doesn’t actually work very well with my dad. It’s like my friends’ fathers were all stamped out from some generic Business Executive Father mold—some Easy-to-Wrap-Around-Their-Daughters’-Little-Fingers mold—but mine wasn’t. I think it’s from the spankings and the farm chores and the being born poor.

“She had an early meeting,” Dad says. “Important new client.”

Mom’s an interior designer. Dad and I secretly make fun of the slogans she’s been trying out for her new business. Her latest is “The things around you can set the tone for your entire life.”

Dad glances at his watch again.

“But your mother and I talked last night, and—”

“Don’t you mean, ‘argued’?” I ask. I reach into the refrigerator for a yogurt. I pretend I really care whether I get blueberry or pomegranate. “I heard you when I came downstairs to get my phone charger. What was Mom saying? ‘Fourteen is the worst age for a girl to be unhappy’? And ‘Three months with Avery furious and miserable, and you’ll wish she were a thousand miles away’?”

Dad has pretty good posture to begin with, but I see his back stiffen.

“What else did you hear?” he asks.

You think I stuck around to hear my own parents trash-talking me? I want to ask. But we don’t ask questions like that in my family.

I open a yogurt and slide a spoon into it.

“Nothing,” I mutter. I only skim the surface of the yogurt. Then I change my mind and dig the spoon in deep, flipping it to bring up the blueberries hidden on the bottom. “Dad, you know I want—”

He isn’t listening. He holds up his hand in that way he has, all Wait your turn. I’m talking now.

“We figured out a compromise,” he says. “You get one week at soccer camp. Then you come to Spain with me.”

“But, Dad, you’ll be away working all the time, and I won’t have any friends there, and even Mom wouldn’t be able to come for very long, not that I’d want to spend the whole summer just with her anyway, but . . .”

There’s a word I can’t quite bring myself to say, because it’d be too much like groveling, or admitting a weakness: Lonely. Don’t you know how lonely I’d be? Or how much that would wreck me? Dad wouldn’t understand how the summer before freshman year has to be all about building up confidence, getting ready to start strong. Lauren has an older sister, and she’s told us about girls who messed up their whole high school careers the first week of ninth grade.

“And you know soccer’s my thing, and I have to get really, really good at it this summer if I’m going to make varsity in the fall, and . . .”

And what if Lauren and Shannon make varsity, and I don’t?

Dad has been talking about Spain for weeks, and it’s like we’ve developed rules for this argument. At some point, I’m supposed to say, Look, I know it’s a big deal, you offering me the chance to go to Europe for a whole summer. I get it. I’m not a spoiled brat. It’s just, this isn’t the right summer. And whenever I bring up varsity, Dad is supposed to say, You’re already an amazing soccer player. You’ll make the team no matter what. He’s supposed to be my biggest cheerleader.

But Dad doesn’t say any of that now. It’s like he’s deaf. He keeps talking, like I haven’t said a thing.

I realize I haven’t heard what he said either.

“I said, this is what we came up with: You can bring a friend to Spain with you.”

Suddenly, I’m picturing my whole eighth-grade soccer team with me in Spain. We’d play soccer in some really cool Spanish park. (Or fútbol. I know they call it fútbol there.) We’d shop in a pack, grabbing up all sorts of European fashions. We’d flirt with really hot European boys. We’d sightsee just enough that we could drop a casual Oh yes, when I was at the Alhambra . . . into conversations when we went back to school in the fall.

We’d go back as the coolest freshmen in the history of Deskins High School.

“One friend,” Dad says. “One. And it has to be someone responsible and trustworthy and, preferably, older. I thought of the perfect person. Kayla. I checked with her family last night, and they’re thinking about it, but it’s probably going to work.”

“Kayla?” I repeat blankly. “Don’t you mean Kennedy? Or Kylie?”

I can’t decide which is more annoying: that he thinks he can pick a best friend for me, or that he can’t even remember the names of the friends I already have. Not that Kennedy or Kylie are such close friends. I’d call them second-string. Maybe third.

I almost drop my yogurt.

“Kayla Butts?” I repeat. “She’s not my friend! When was the last time I even saw her?”

Kayla Butts is this girl whose mom was best friends with my nanny when I was little. They live out in the middle of nowhere, an hour or two from Columbus, so it was always a big deal when they’d visit. Angelica, my nanny, always wanted to show me off, so she’d put me in some frilly dress. And then Angelica would bribe me to be good by letting Kayla and me do things that weren’t usually allowed: drinking chocolate milk, not white, with lunch; climbing to the top of the jungle gym at the park, instead of having to stop halfway up . . . I can remember Kayla’s mom laughing and saying she’d catch us if we fell. But we never fell. I almost always cried when it came time for Kayla to leave, because I’d gotten the frilly dress dirty, or Angelica was extra-mean when she went back to enforcing rules—or I just didn’t like having to stop playing what I wanted.

But my crying when Kayla left made everyone think Kayla and I were BFFs.

Back then, maybe we were.

But for years after that, Kayla and her mom would still swing by at the holidays and drop off Christmas presents for me. Which was silly, because I’m pretty sure Kayla’s family is kind of poor.

Maybe Kayla and her mom even came this past Christmas, and I just don’t remember.

“You and Kayla always played together better than any of your other friends,” Dad says. “That’s what Angelica always said.”

“You mean when I was five?” I ask. “And she was seven? Dad, news bulletin—five- and seven-year-olds, fourteen- and sixteen-year-olds—it’s not the same! I don’t play with Barbie dolls anymore either. I bet I couldn’t even pick Kayla out in a crowd. You really want to make me spend the whole summer with a total stranger?”

“No,” Dad says. “With a whole country full of strangers. Some of whom might become friends. It’ll be good for you.”

And then he opens the door and walks out, like the conversation is over.

I grab my phone and immediately text Shannon and Lauren: My dad is crazy! He IS going to make me go to Spain!

Lauren texts a bunch of frowny face emojis, along with the one that’s crying so hard the tears flow upward. Then she writes, You have to talk him out of it!

I can’t, I write back. Then I just stare at the words on the screen. I can’t bear to send them.

But it doesn’t matter. I know my dad.

This is really going to happen.

Margaret Peterson Haddix is the author of many critically and popularly acclaimed YA and middle grade novels, including the Children of Exile series, The Missing series, the Under Their Skin series, and the Shadow Children series. A graduate of Miami University (of Ohio), she worked for several years as a reporter for The Indianapolis News. She also taught at the Danville (Illinois) Area Community College. She lives with her family in Columbus, Ohio. Visit her at HaddixBooks.com.

The Summer of Broken Things

SEE ALL
See more by Margaret Peterson Haddix
Thank you for signing up, fellow book lover!