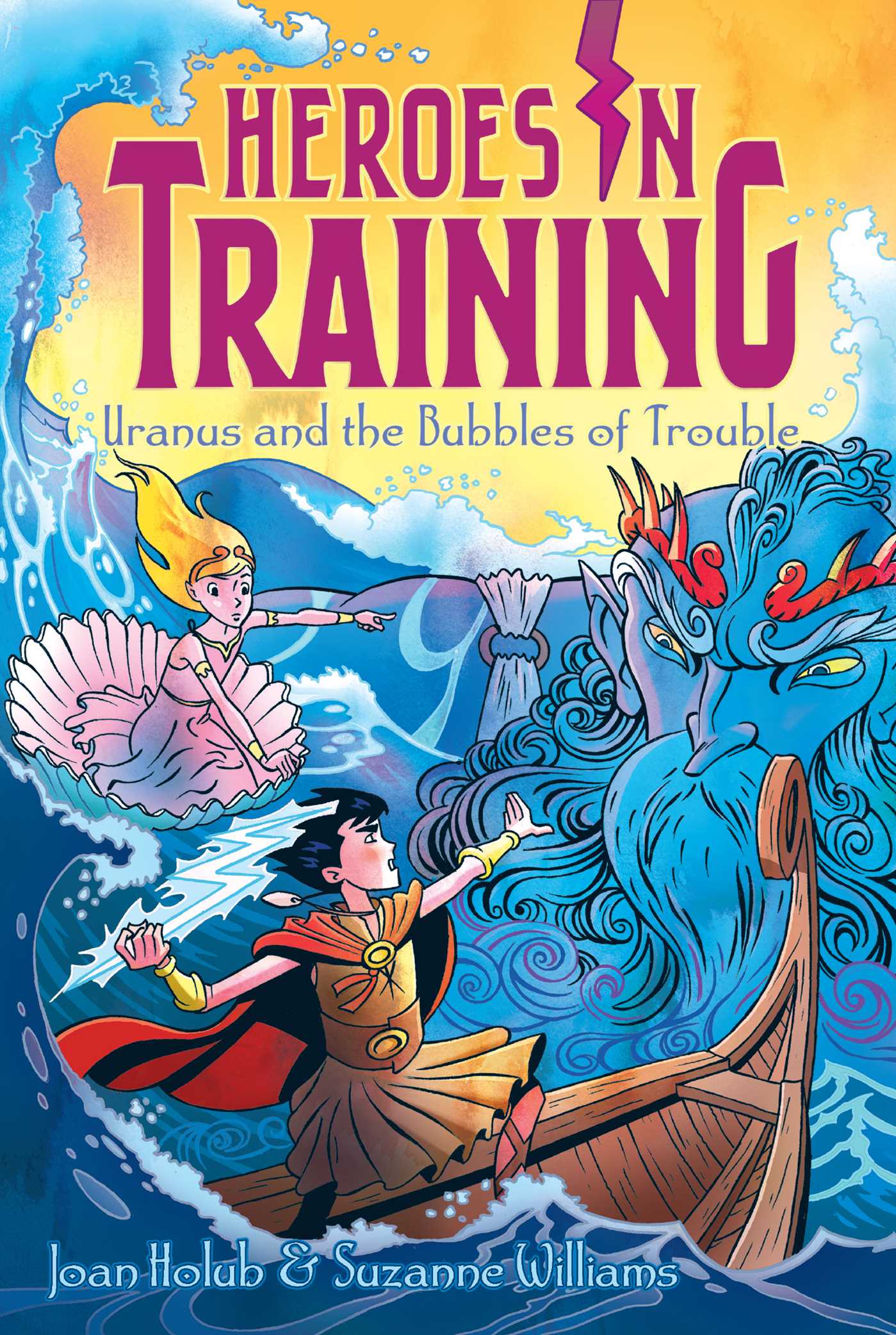 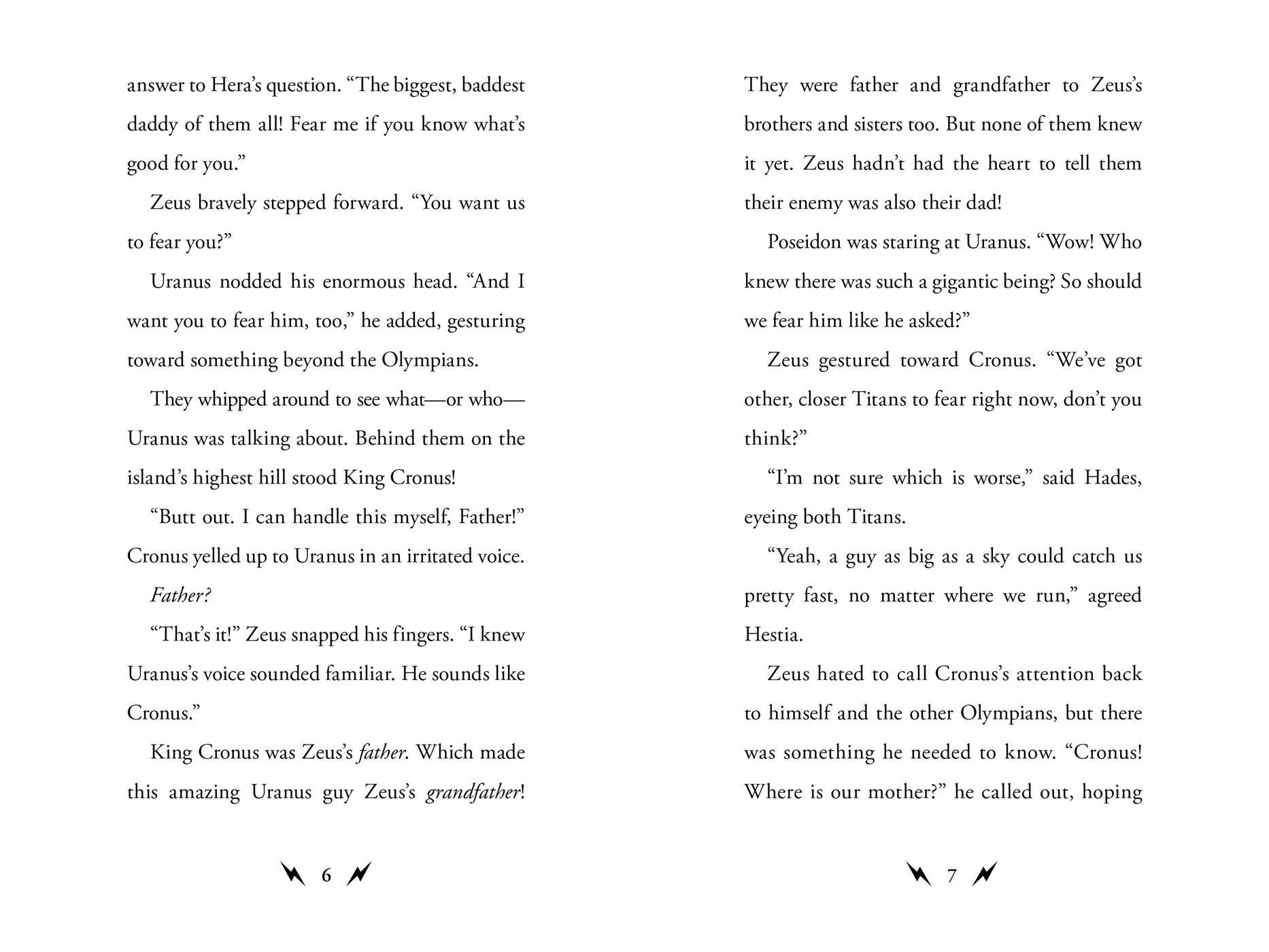 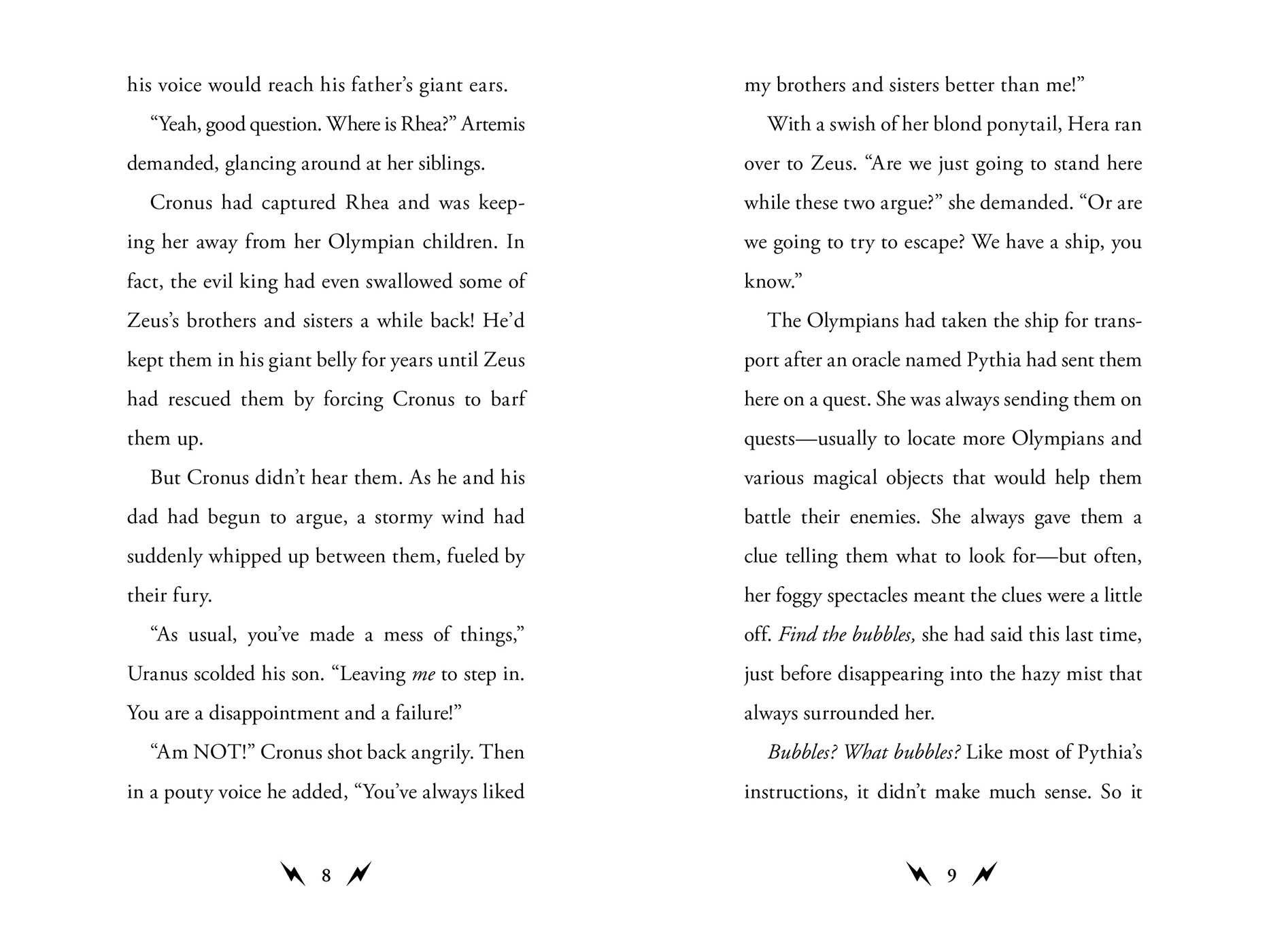 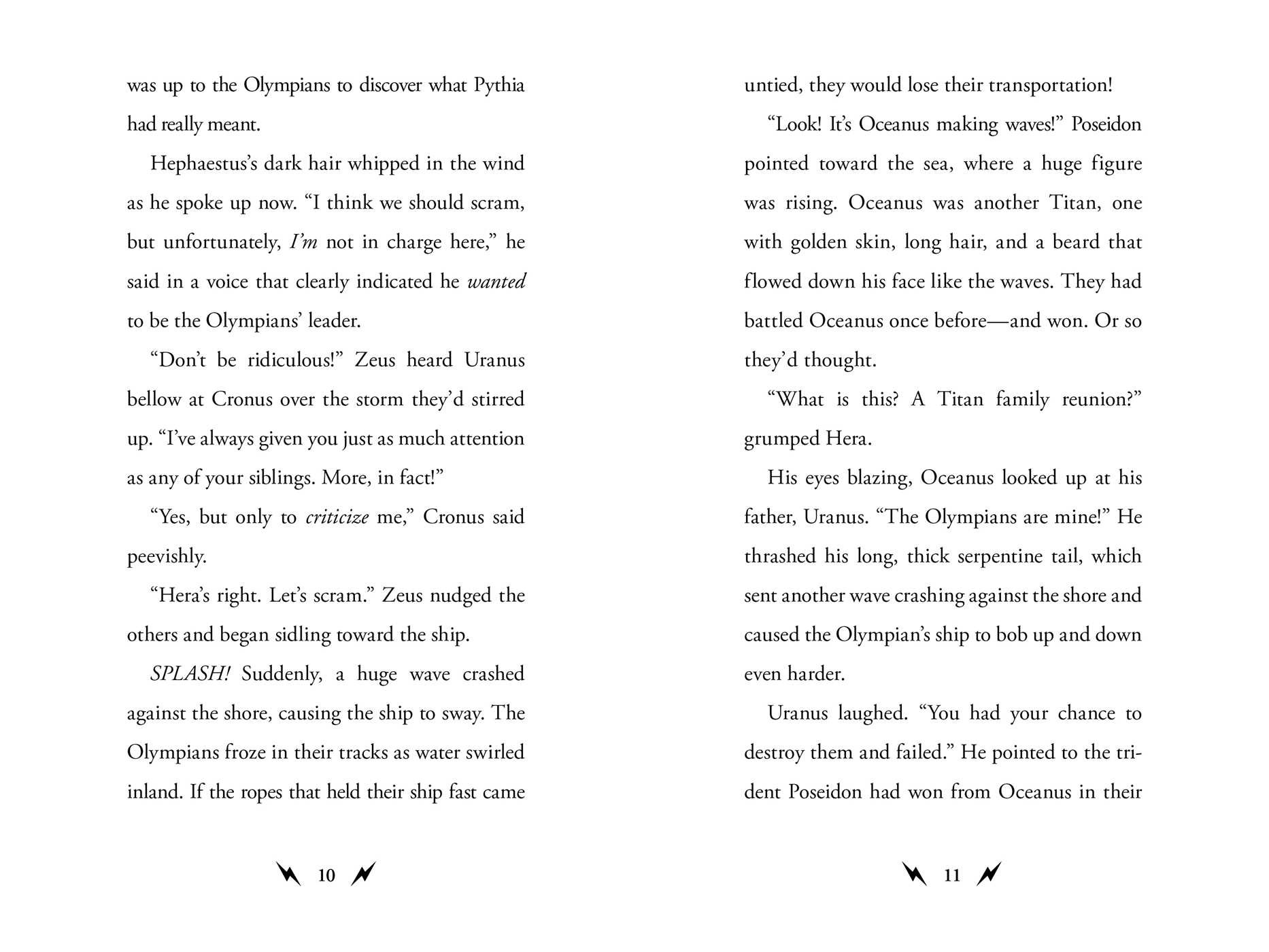 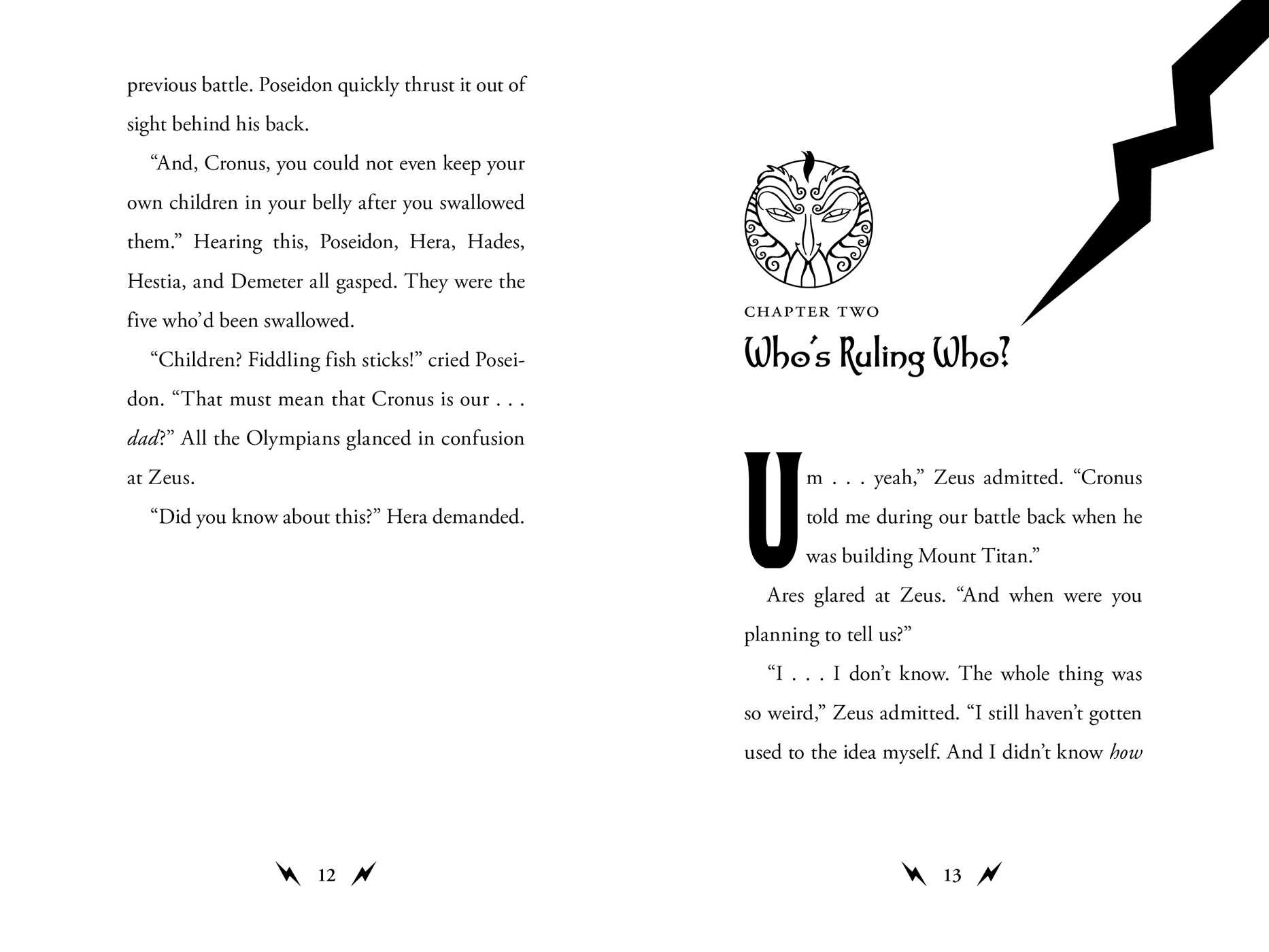 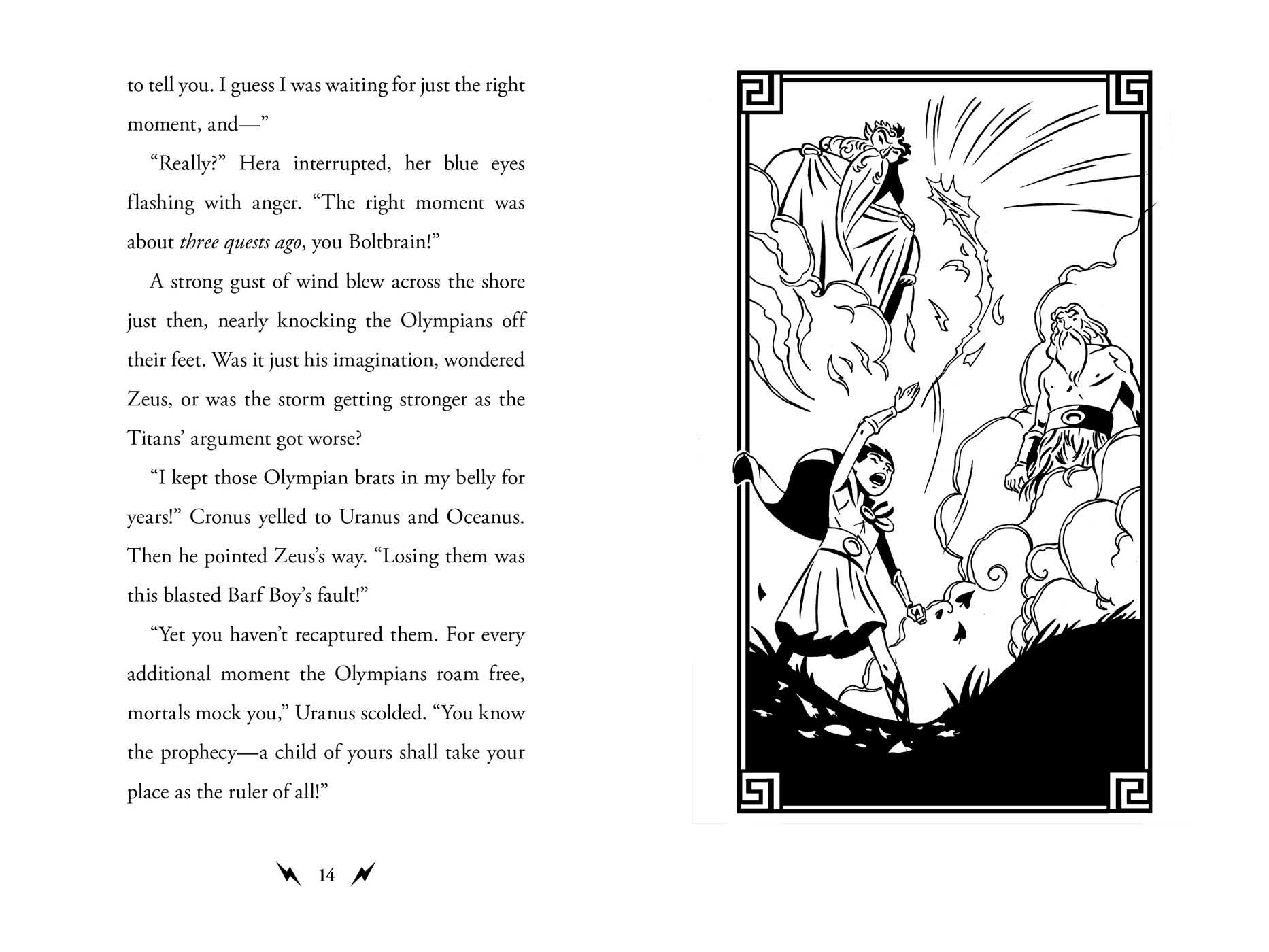 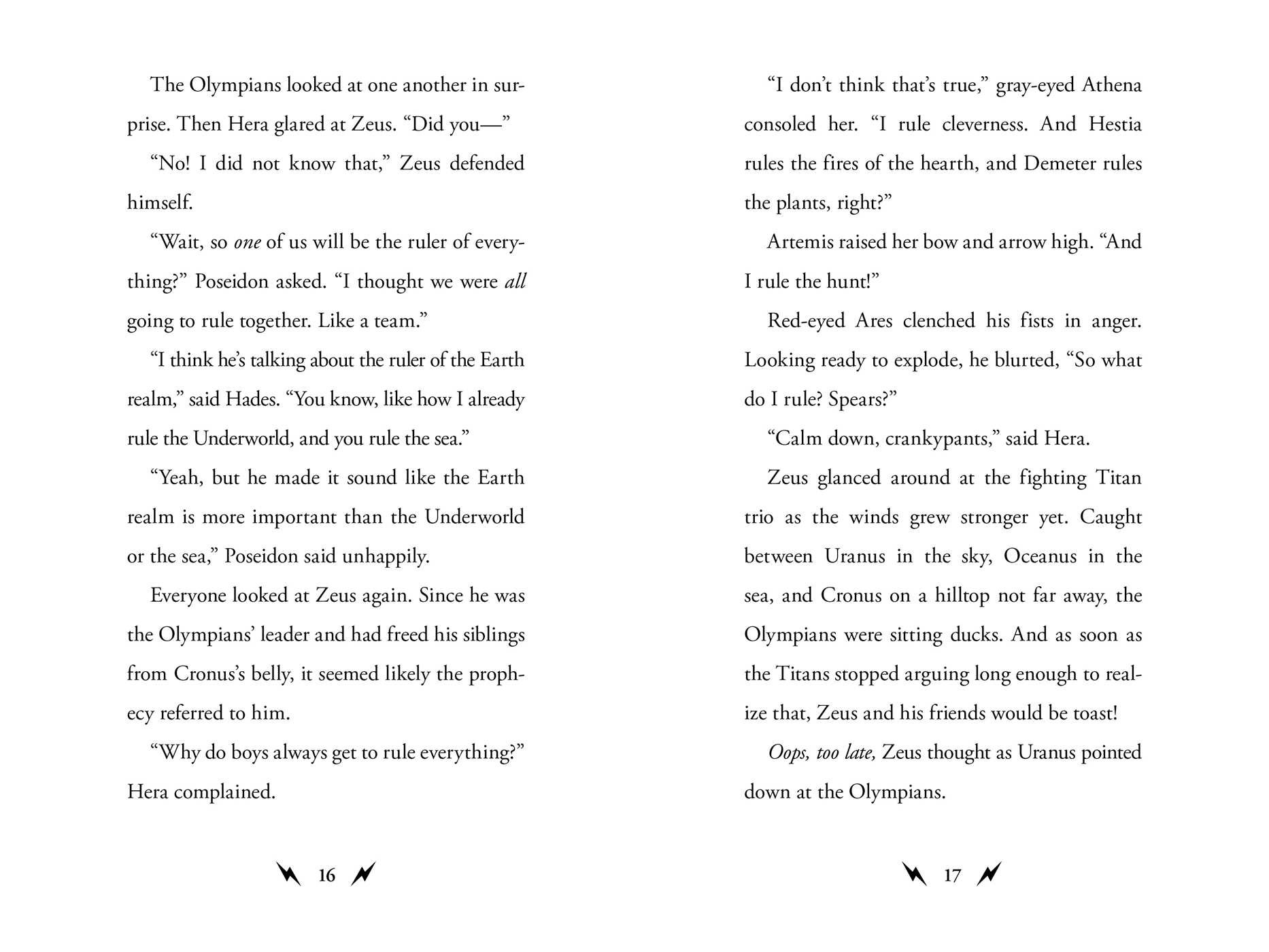 A clash between the Titans and The Olympians at sea leaves Zeus and his friends shipwrecked—and in a tidal wave of trouble—in this Heroes in Training adventure.

After an encounter with Uranus, God of the Sky (and father of the Titans), the Olympians find themselves in the middle of a battle between two big-time Titans. On Cronus’s orders, Titan Oceanus dives into the sea and causes it to turn even stormier. He’s heading straight for the Olympians’ boat, planning to capsize it, no doubt. Just when it looks like the Olympians are done for, Zeus throws his thunderbolt high and causes a huge battle in the sky between the Titans.

As broken stars and hunks of clouds crash to earth and into the sea around the Olympians and their ship, they manage to escape—thanks to some help from Zeus’s medallion and guide, Chip—but find themselves shipwrecked. And as Uranus’s stars begin to fall in the ocean, the huge splash makes a wave of bubbles that heads for the shore of the island where the Olympians and their ship are trapped. And Zeus has a feeling those bubbles mean trouble…

CHAPTER ONE The Ruler of the Sky
Ten-year-old Zeus and his band of ten Olympians stood on an island in the Aegean Sea and craned their necks to stare upward. The sky above them had started to turn as black as night—in the middle of the day! Obviously, this was no ordinary darkness.

“Guys, this doesn’t look good,” he said. The others—all kids Zeus’s own age—nodded gravely. They had been gathering coconuts and berries before setting sail in a ship they’d stolen—um, borrowed.

“Yeah, something’s not right,” agreed his curly-haired brother Hades. “We just went from day to night in a few minutes!”

“It’s like time sped up,” added their red-haired sister, Demeter.

Besides Zeus, Hades, and Demeter, the Olympian members included another brother named Poseidon, and sisters Hera and Hestia. Onshore nearby were also Apollo and his twin sister, Artemis. With Athena, Ares, and the newest member, Hephaestus, that made eleven Olympians in all.

Black-haired, blue-eyed Zeus was the leader of the group. Though he and the others looked like normal mortal boys and girls, they were actually immortals and their actions were mighty. And they were absolutely determined to stop their giant enemies, the evil King Cronus (ruler of the Titans) and his Crony henchmen, from taking over the world. This was an outcome every citizen in Greece lived in fear of!

What the sudden strange sky had to do with Cronus, Zeus wasn’t sure. But he guessed there must be some connection. No sooner did he think this than a deep voice boomed from overhead.

Poseidon—the god of the sea—jabbed Zeus in the shoulder with his magical three-pronged trident, jolting him from his frozen state. “Which guy?” Poseidon asked, confusion showing in his turquoise-blue eyes.
Joan Holub