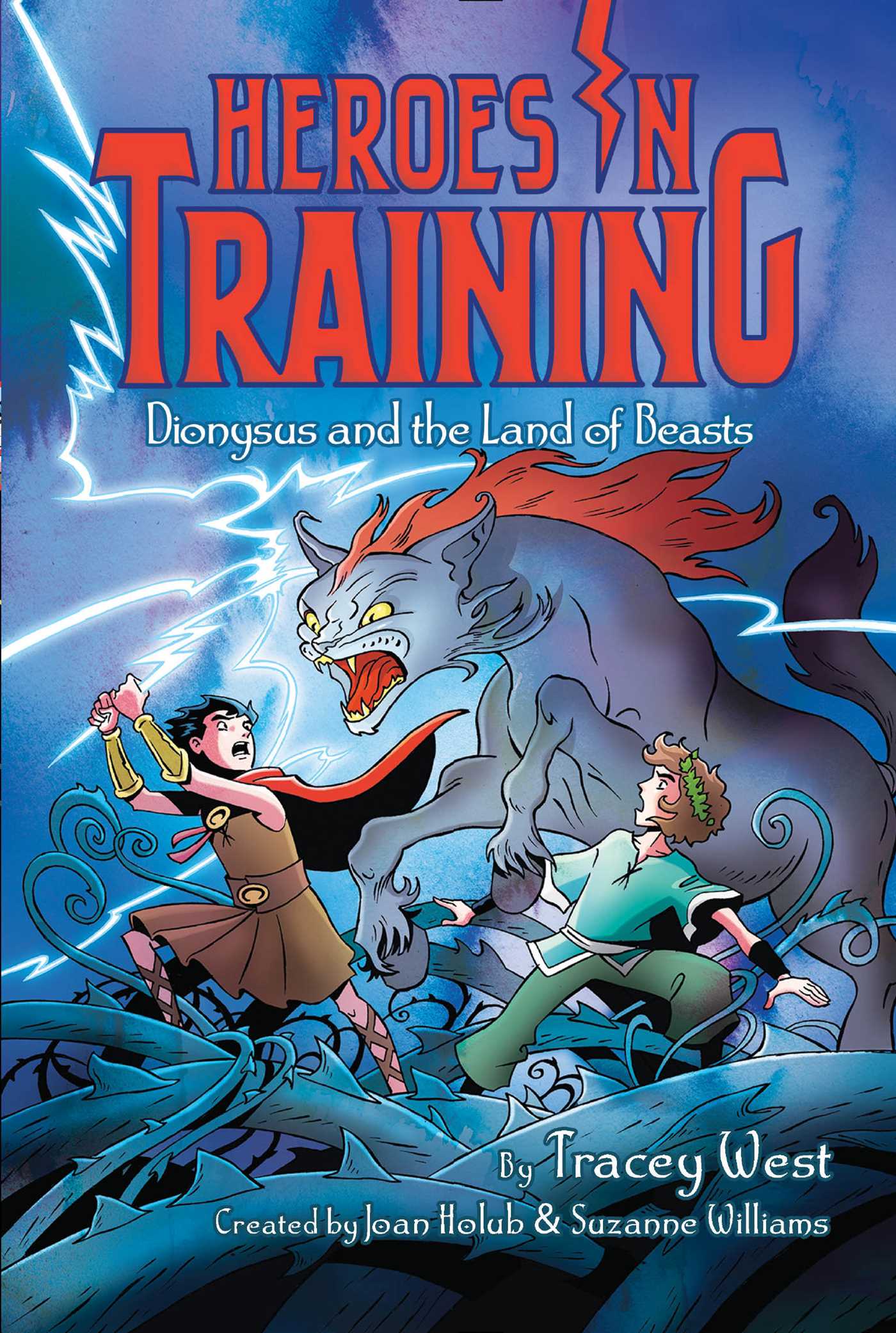 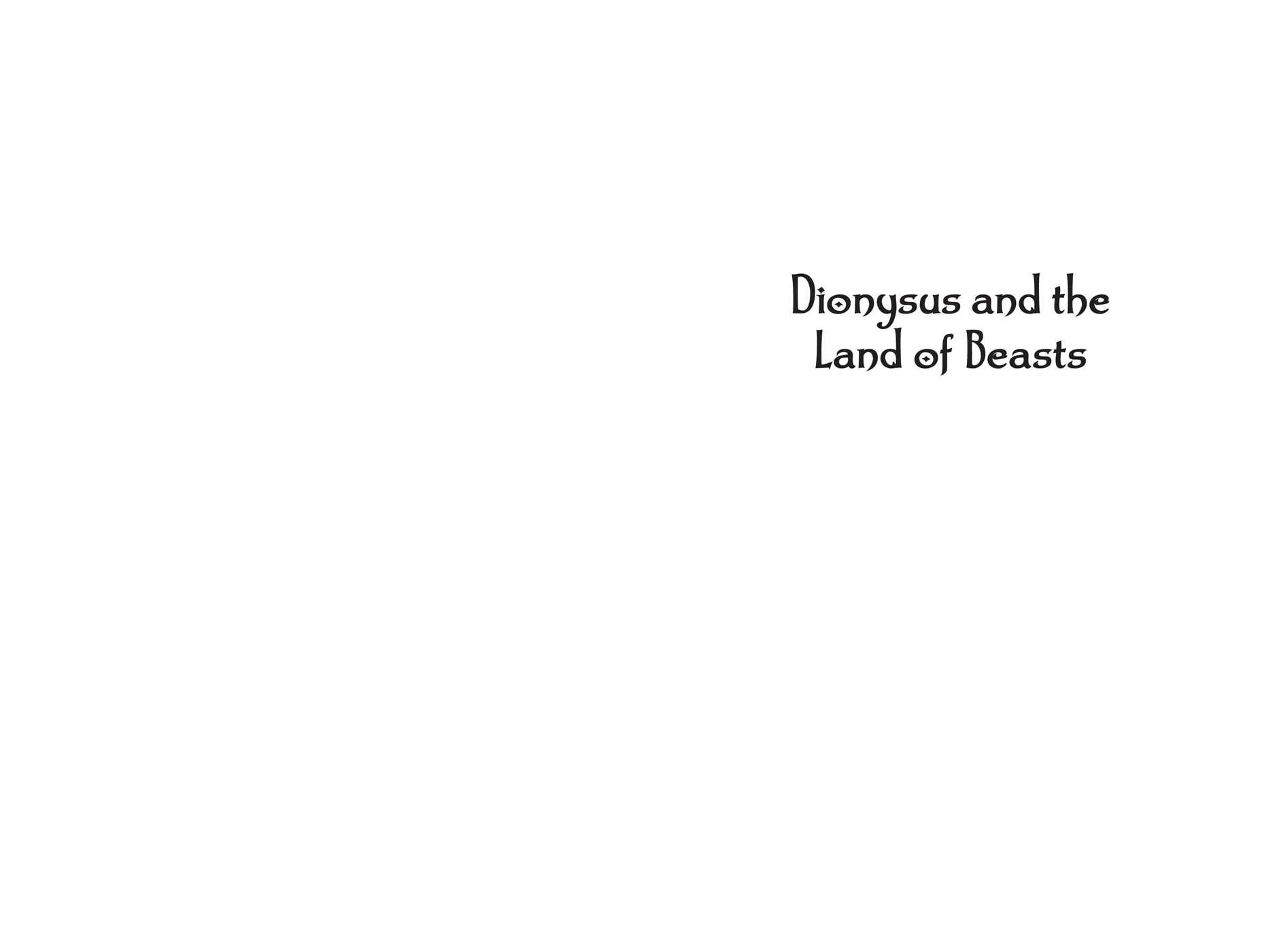 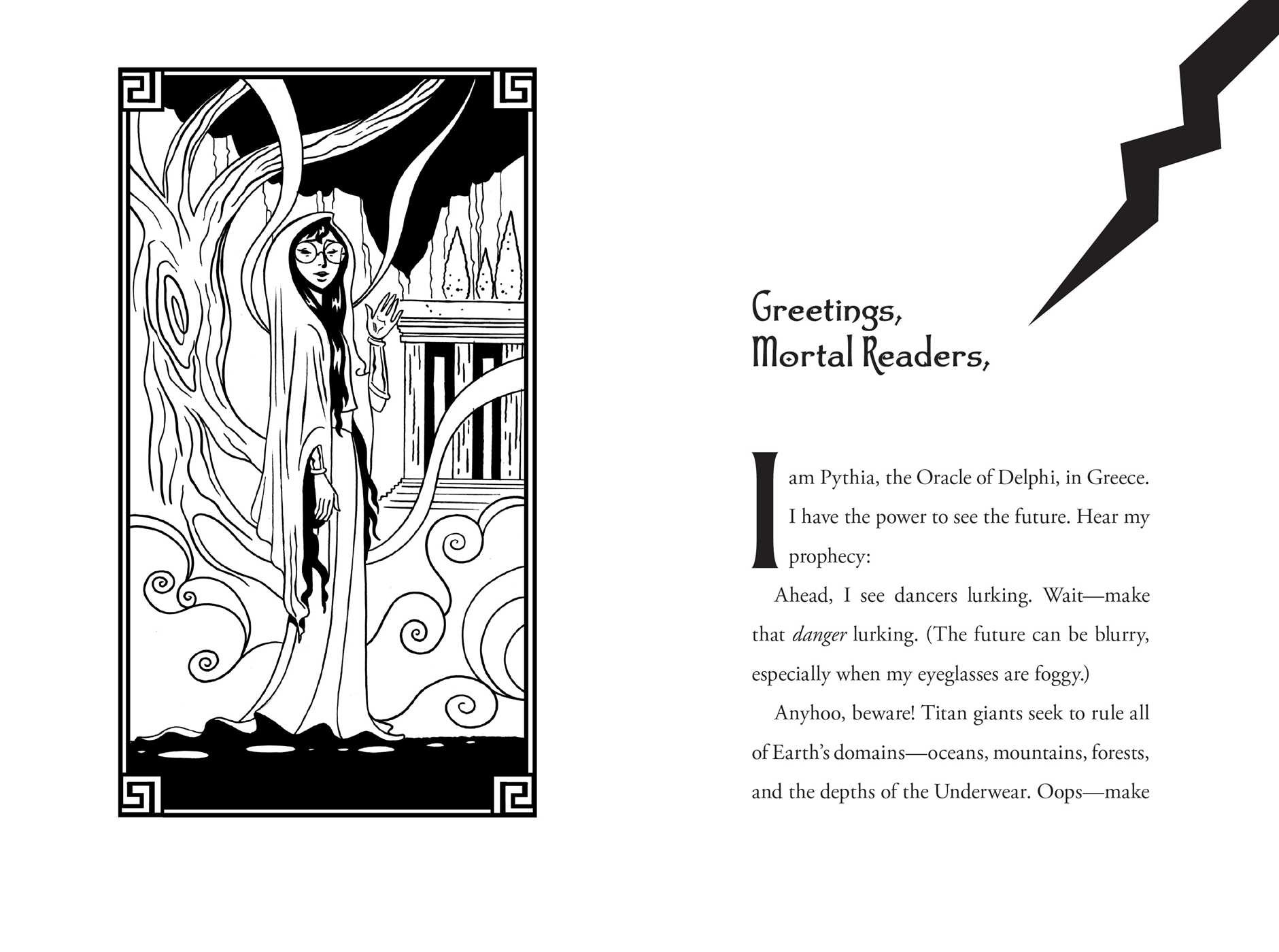 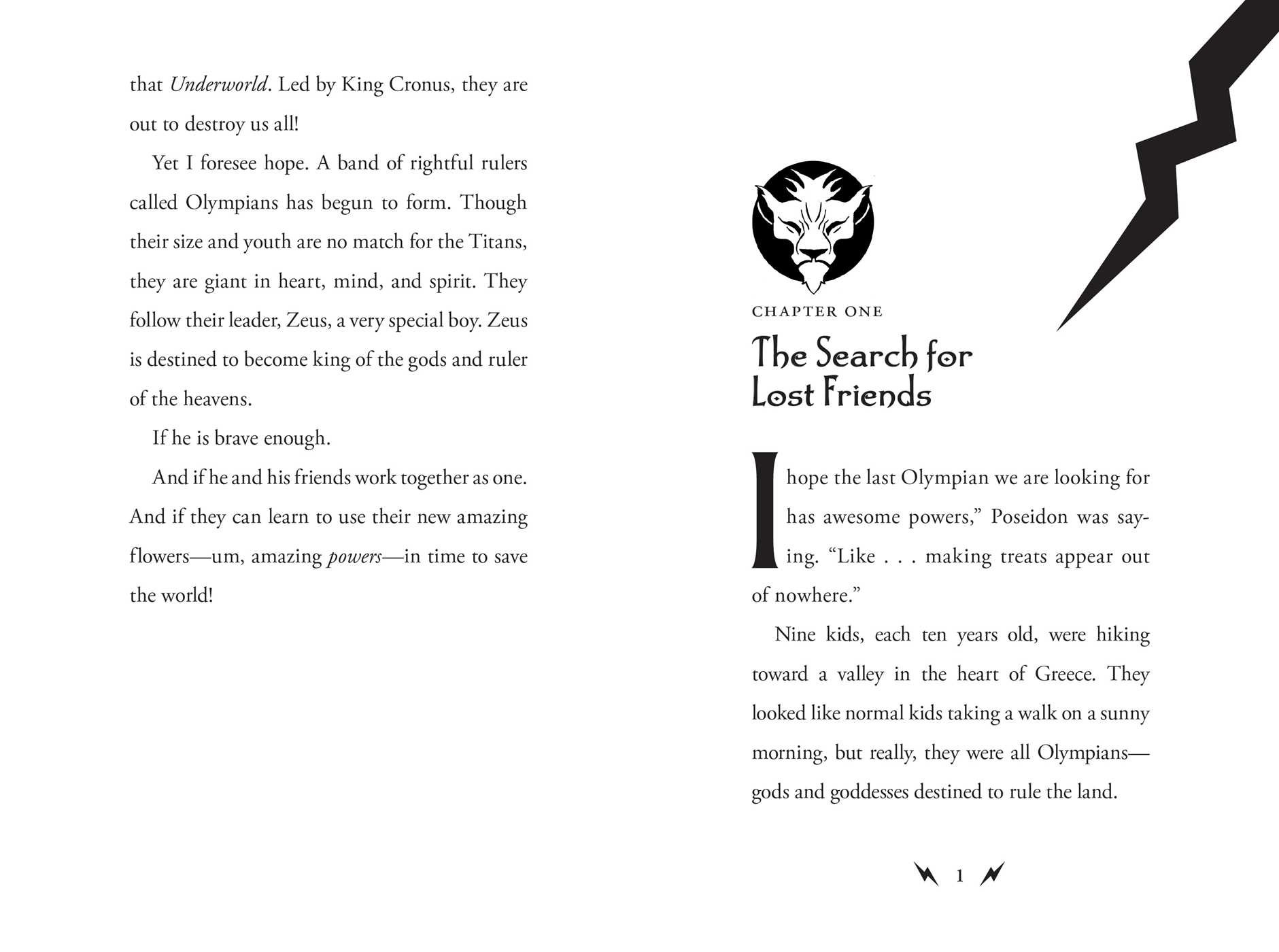 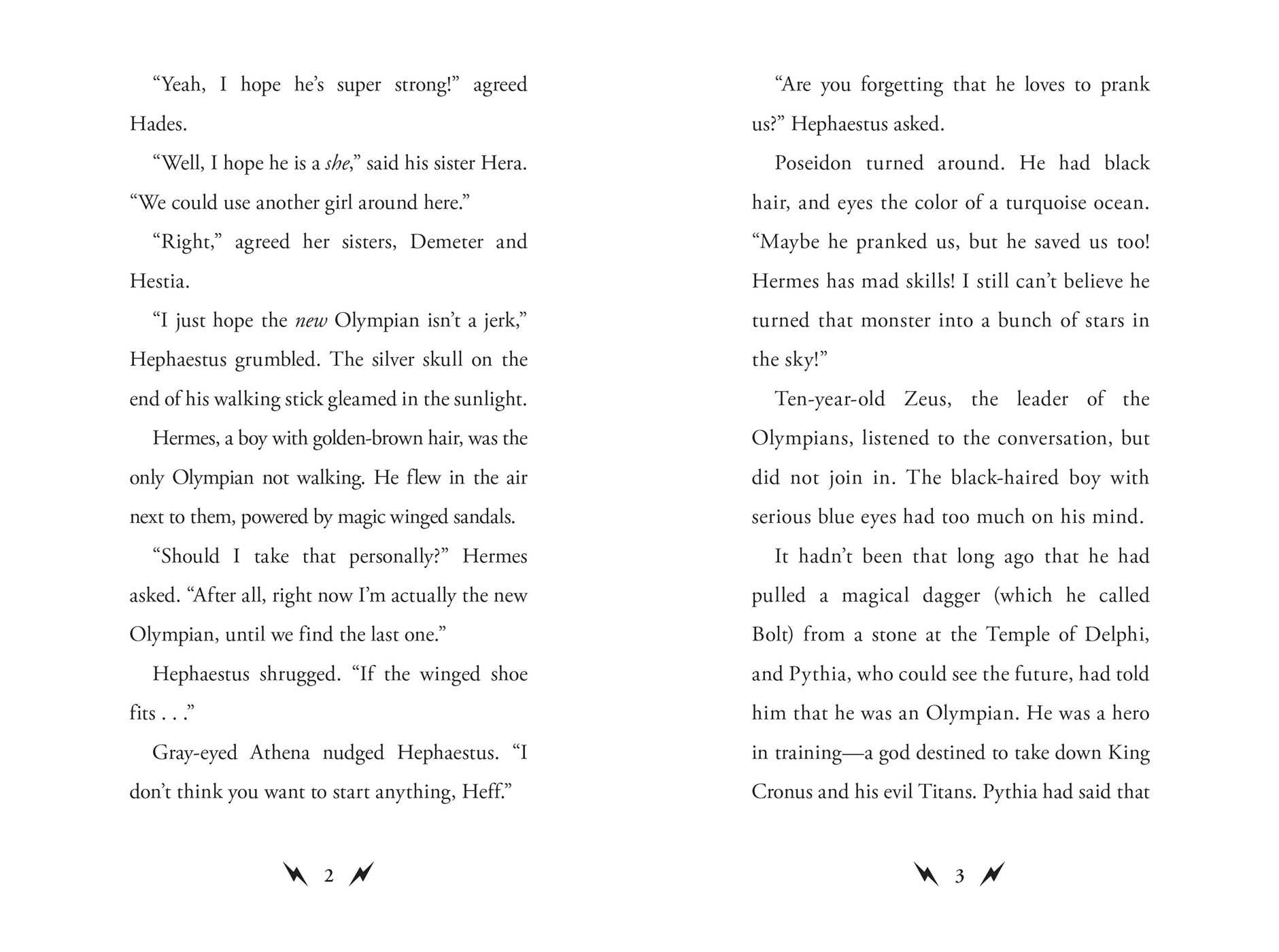 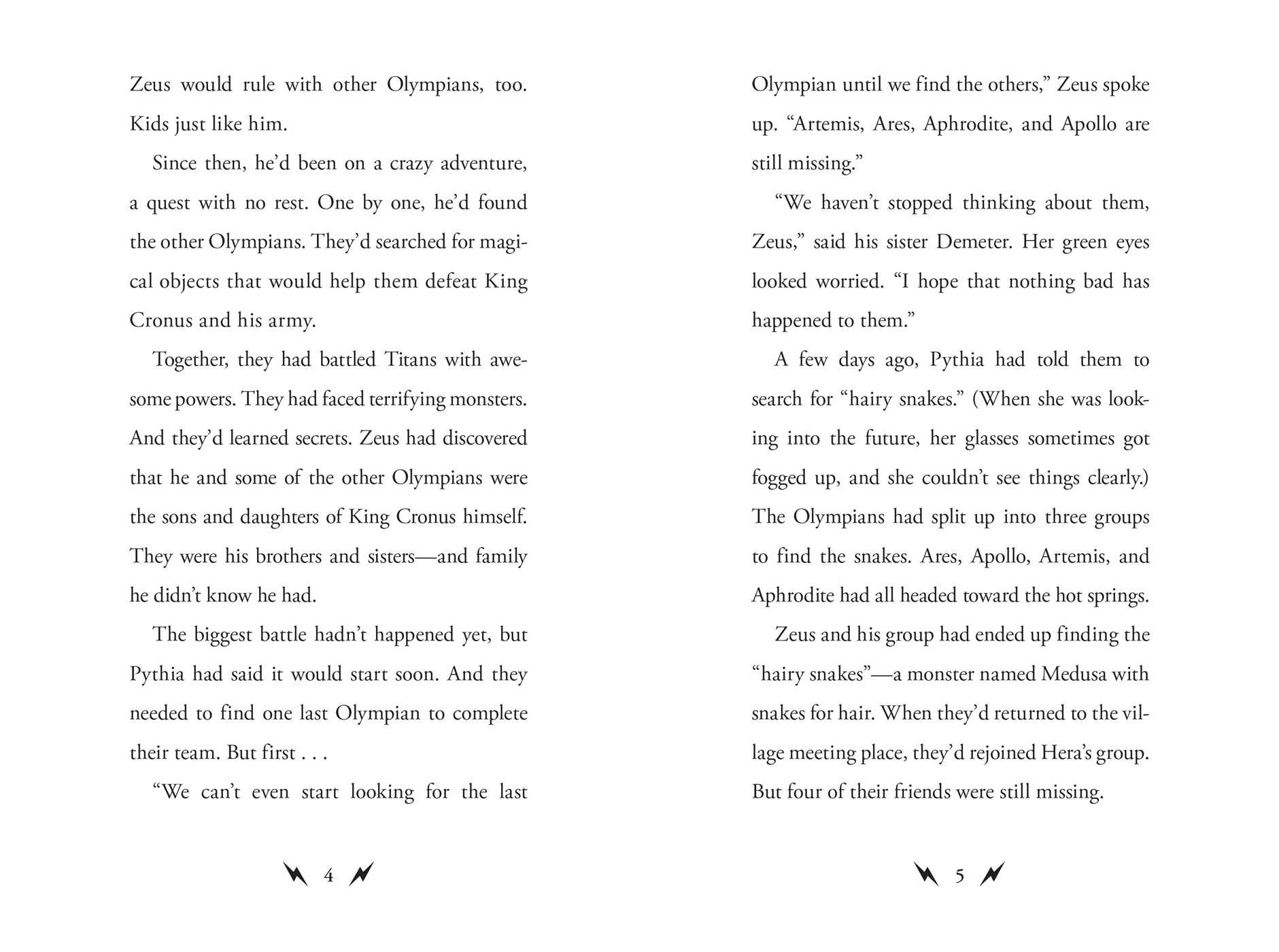 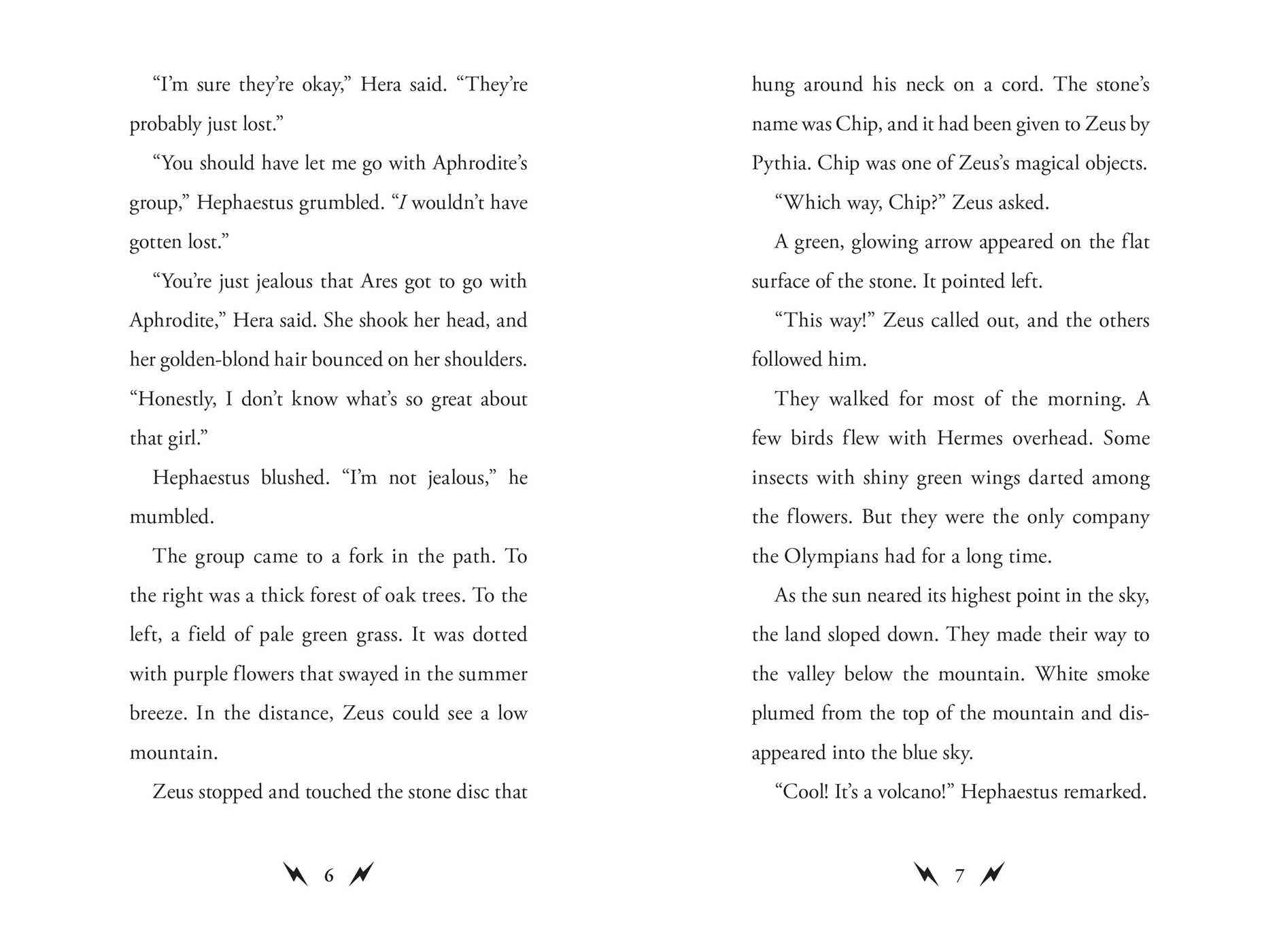 Zeus and his friends discover another Olympian who might be able to help in their quest to defeat King Cronus in this Heroes in Training adventure.

With a clue from their trusty oracle, Pythia, Zeus and his Olympian friends are off to the “Land of Grapes,” where they discover a festival. The headline act is Dion and the Goat Guys, and Zeus has a funny feeling this Dion guy might be one of them. Athena points out that this Dion guy is the right age, and he’s definitely not acting like a regular kid. Finally, Dion and the Goat Guys take a break, and Zeus and the other Olympians approach him.

Zeus informs him that he and the others are Olympians, and they think Dion might be one too. Dion (short for Dionysus, he tells them) starts to brag that he wouldn’t be surprised, because he has awesome talents and magic powers. Before the Olympians can ask him about his powers, some of the crowd members start to throng the Olympians. Are they really Olympians? Are they really going to defeat King Cronus? Dion looks kind of peeved about this, and the next thing the Olympians know, they are in a field somewhere, puzzled and not sure what happened.

What kind of magical powers does this Dion kid actually have? And will he be more of a help—or a pain—in their ultimate quest to defeat King Cronus once and for all?

CHAPTER ONE The Search for Lost Friends
I hope the last Olympian we are looking for has awesome powers,” Poseidon was saying. “Like . . . making treats appear out of nowhere.”

Nine kids, each ten years old, were hiking toward a valley in the heart of Greece. They looked like normal kids taking a walk on a sunny morning, but really, they were all Olympians—gods and goddesses destined to rule the land.

“Well, I hope he is a she,” said his sister Hera. “We could use another girl around here.”

“I just hope the new Olympian isn’t a jerk,” Hephaestus grumbled. The silver skull on the end of his walking stick gleamed in the sunlight.

Hermes, a boy with golden-brown hair, was the only Olympian not walking. He flew in the air next to them, powered by magic winged sandals.

“Should I take that personally?” Hermes asked. “After all, right now I’m actually the new Olympian, until we find the last one.”

Gray-eyed Athena nudged Hephaestus. “I don’t think you want to start anything, Heff.”

“Are you forgetting that he loves to prank us?” Hephaestus asked.

Poseidon turned around. He had black hair, and eyes the color of a turquoise ocean. “Maybe he pranked us, but he saved us too! Hermes has mad skills! I still can’t believe he turned that monster into a bunch of stars in the sky!”

Ten-year-old Zeus, the leader of the Olympians, listened to the conversation, but did not join in. The black-haired boy with serious blue eyes had too much on his mind.

It hadn’t been that long ago that he had pulled a magical dagger (which he called Bolt) from a stone at the Temple of Delphi, and Pythia, who could see the future, had told him that he was an Olympian. He was a hero in training—a god destined to take down King Cronus and his evil Titans. Pythia had said that Zeus would rule with other Olympians, too. Kids just like him.

Since then, he’d been on a crazy adventure, a quest with no rest. One by one, he’d found the other Olympians. They’d searched for magical objects that would help them defeat King Cronus and his army.

Together, they had battled Titans with awesome powers. They had faced terrifying monsters. And they’d learned secrets. Zeus had discovered that he and some of the other Olympians were the sons and daughters of King Cronus himself. They were his brothers and sisters—and family he didn’t know he had.

The biggest battle hadn’t happened yet, but Pythia had said it would start soon. And they needed to find one last Olympian to complete their team. But first . . .

“We can’t even start looking for the last Olympian until we find the others,” Zeus spoke up. “Artemis, Ares, Aphrodite, and Apollo are still missing.”

“We haven’t stopped thinking about them, Zeus,” said his sister Demeter. Her green eyes looked worried. “I hope that nothing bad has happened to them.”

A few days ago, Pythia had told them to search for “hairy snakes.” (When she was looking into the future, her glasses sometimes got fogged up, and she couldn’t see things clearly.) The Olympians had split up into three groups to find the snakes. Ares, Apollo, Artemis, and Aphrodite had all headed toward the hot springs.

Zeus and his group had ended up finding the “hairy snakes”—a monster named Medusa with snakes for hair. When they’d returned to the village meeting place, they’d rejoined Hera’s group. But four of their friends were still missing.

“You should have let me go with Aphrodite’s group,” Hephaestus grumbled. “I wouldn’t have gotten lost.”

“You’re just jealous that Ares got to go with Aphrodite,” Hera said. She shook her head, and her golden-blond hair bounced on her shoulders. “Honestly, I don’t know what’s so great about that girl.”

The group came to a fork in the path. To the right was a thick forest of oak trees. To the left, a field of pale green grass. It was dotted with purple flowers that swayed in the summer breeze. In the distance, Zeus could see a low mountain.

Zeus stopped and touched the stone disc that hung around his neck on a cord. The stone’s name was Chip, and it had been given to Zeus by Pythia. Chip was one of Zeus’s magical objects.

A green, glowing arrow appeared on the flat surface of the stone. It pointed left.

“This way!” Zeus called out, and the others followed him.

They walked for most of the morning. A few birds flew with Hermes overhead. Some insects with shiny green wings darted among the flowers. But they were the only company the Olympians had for a long time.

As the sun neared its highest point in the sky, the land sloped down. They made their way to the valley below the mountain. White smoke plumed from the top of the mountain and disappeared into the blue sky.