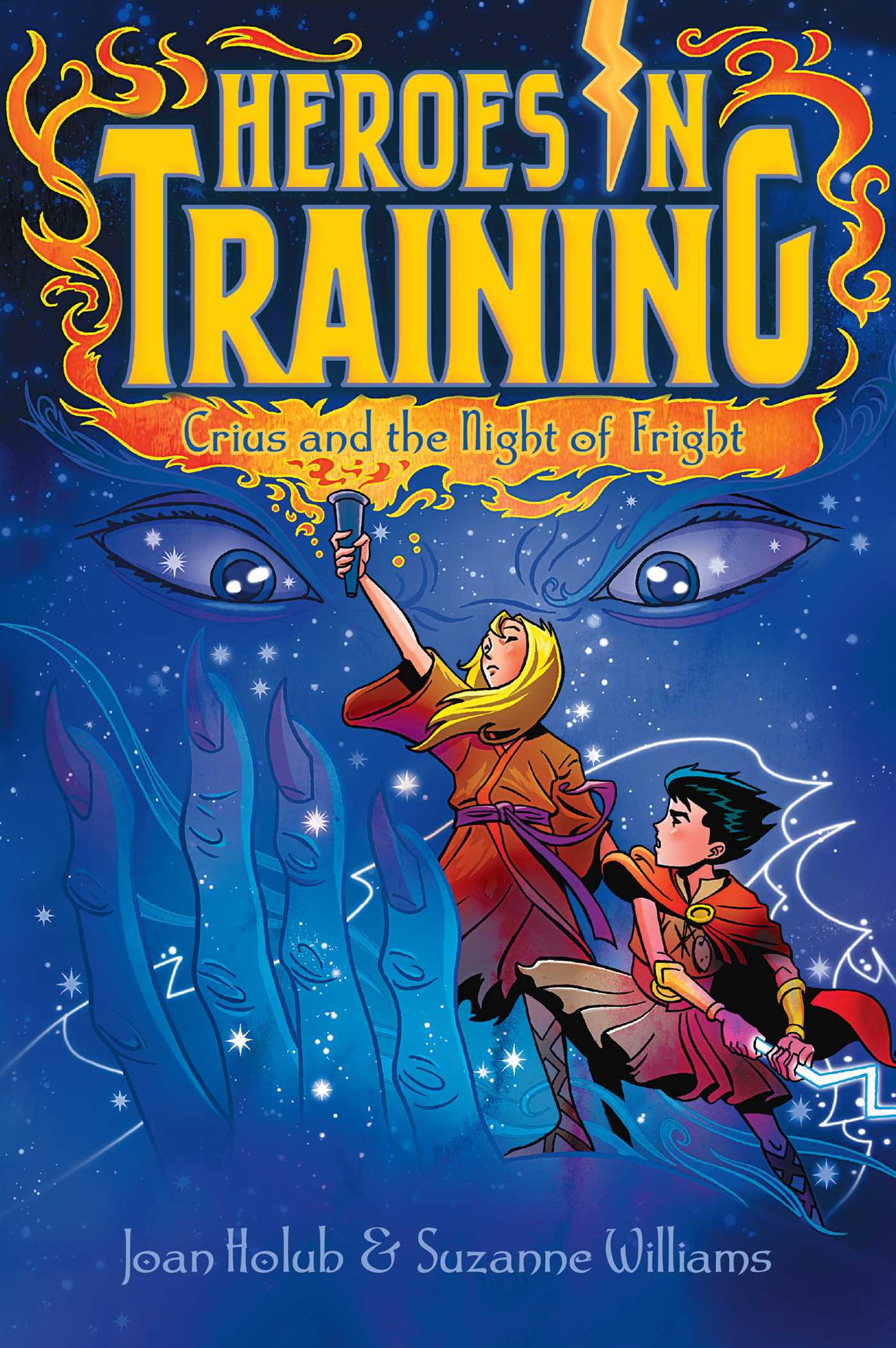 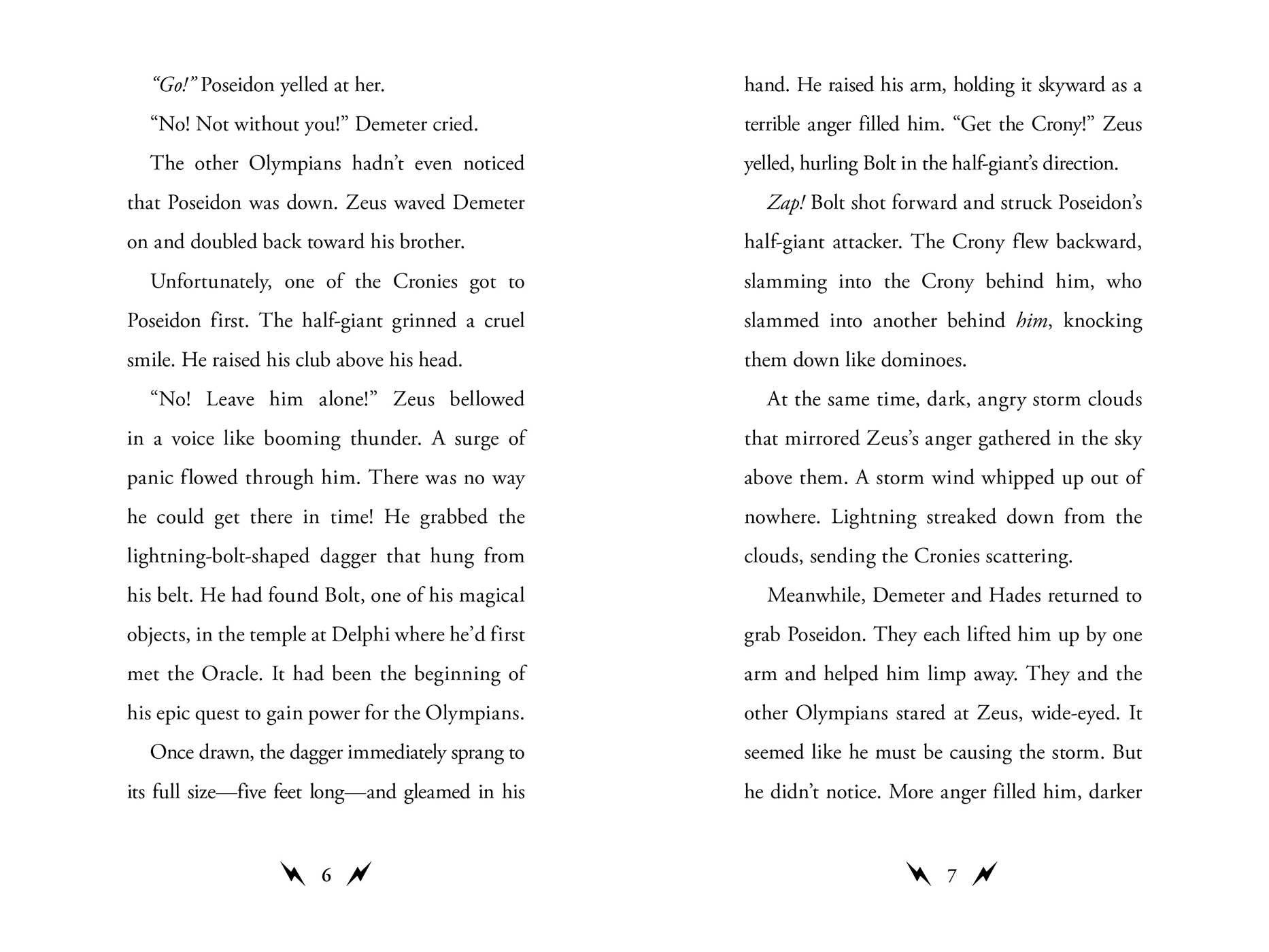 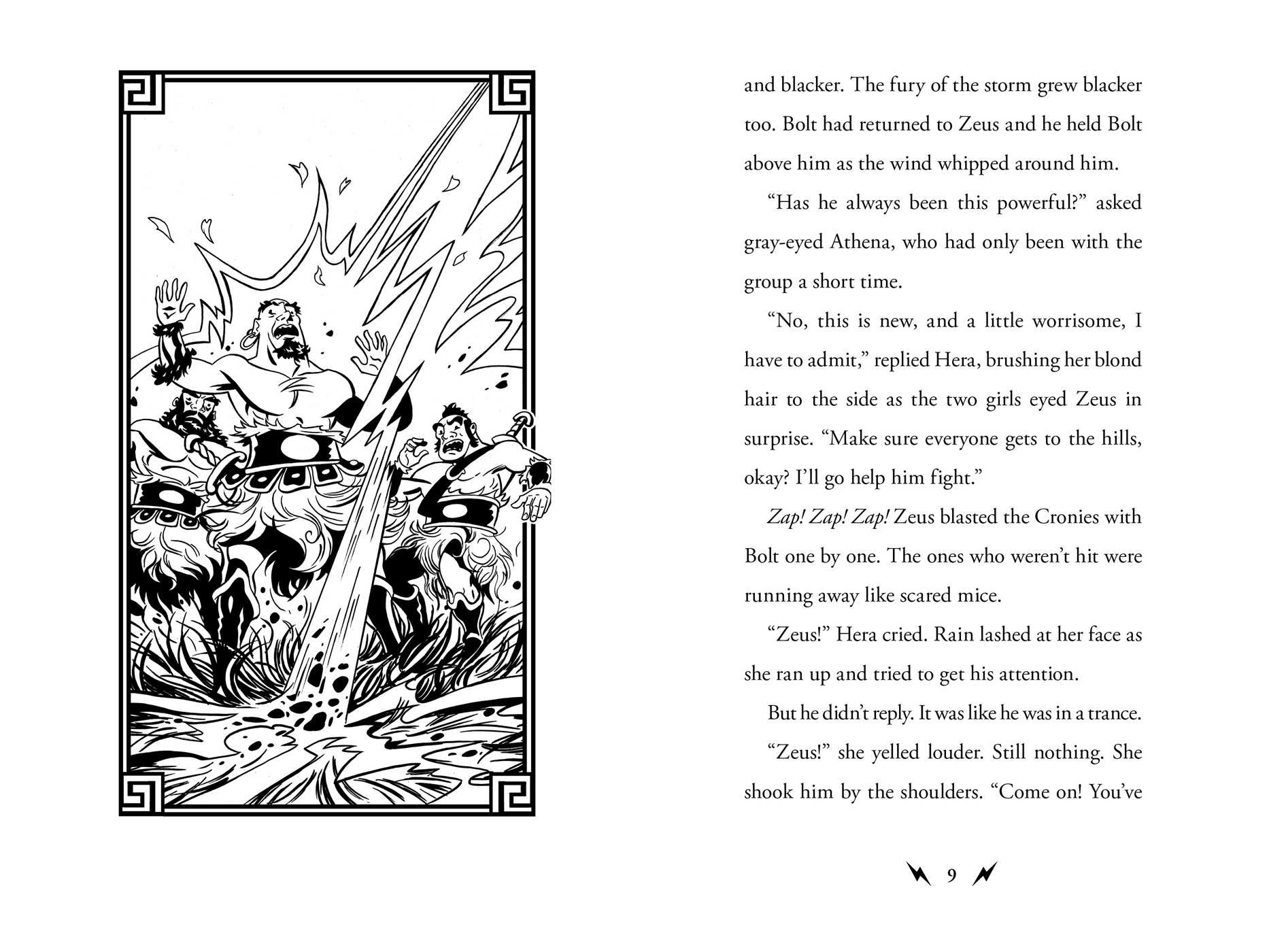 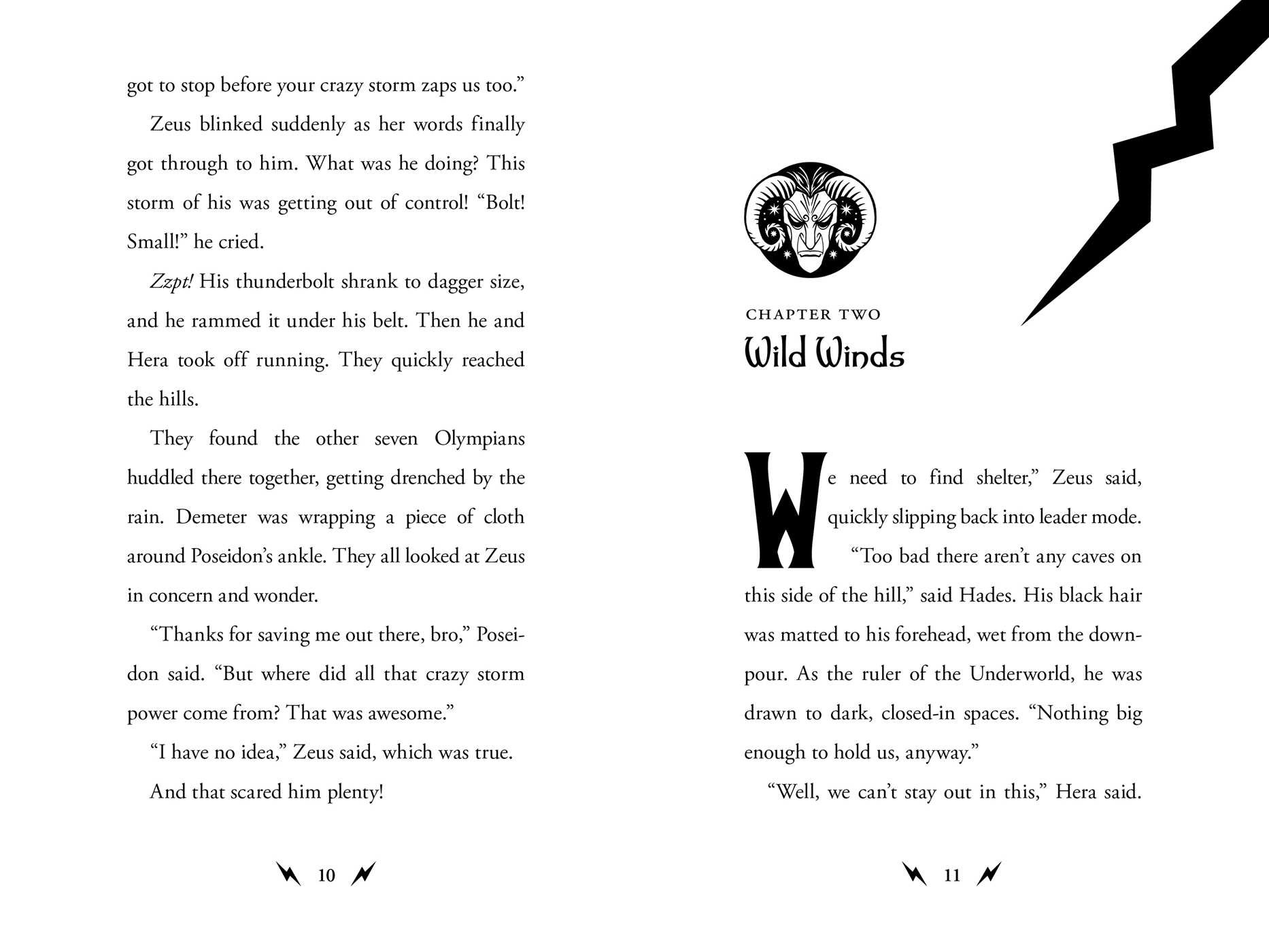 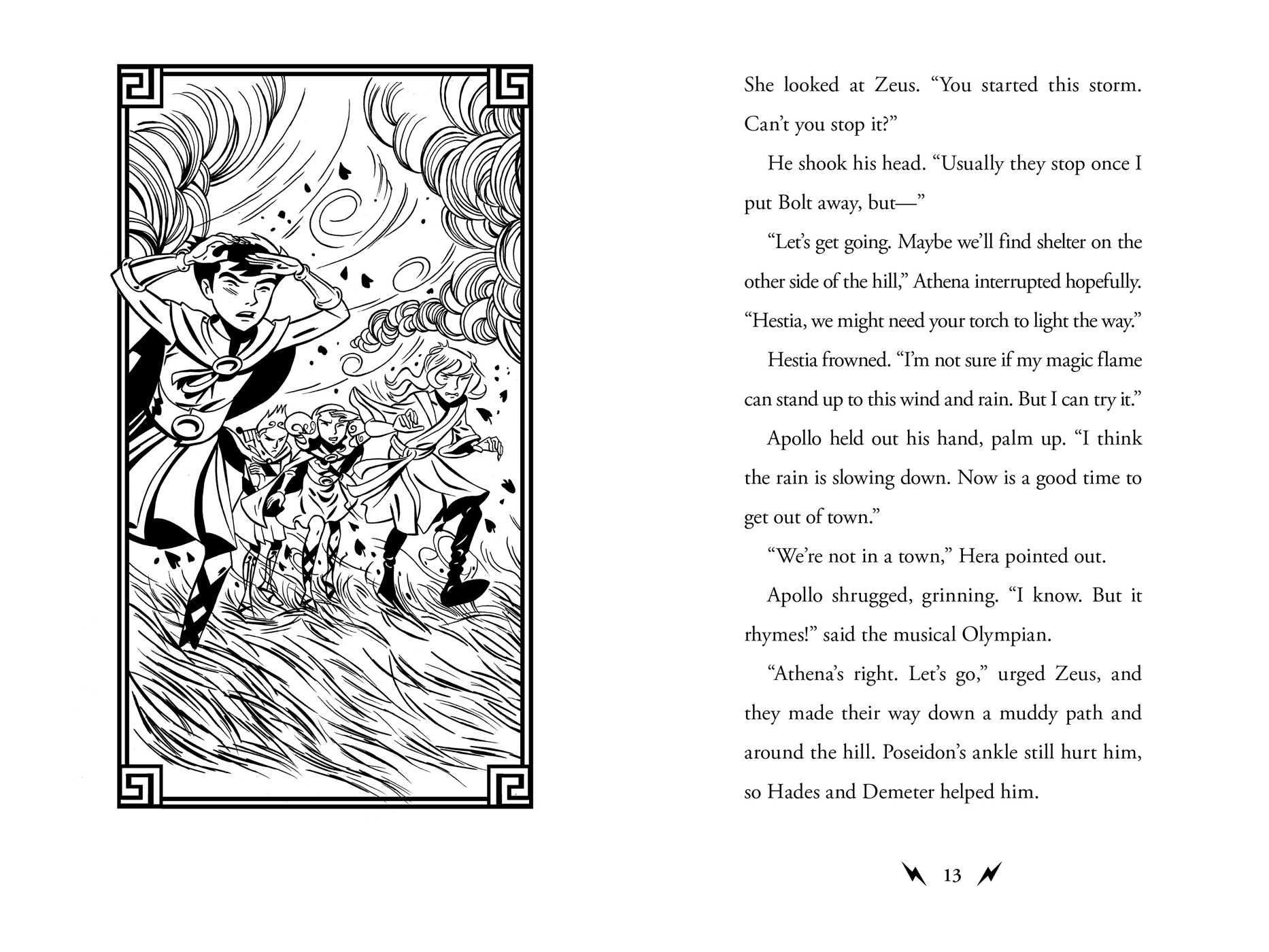 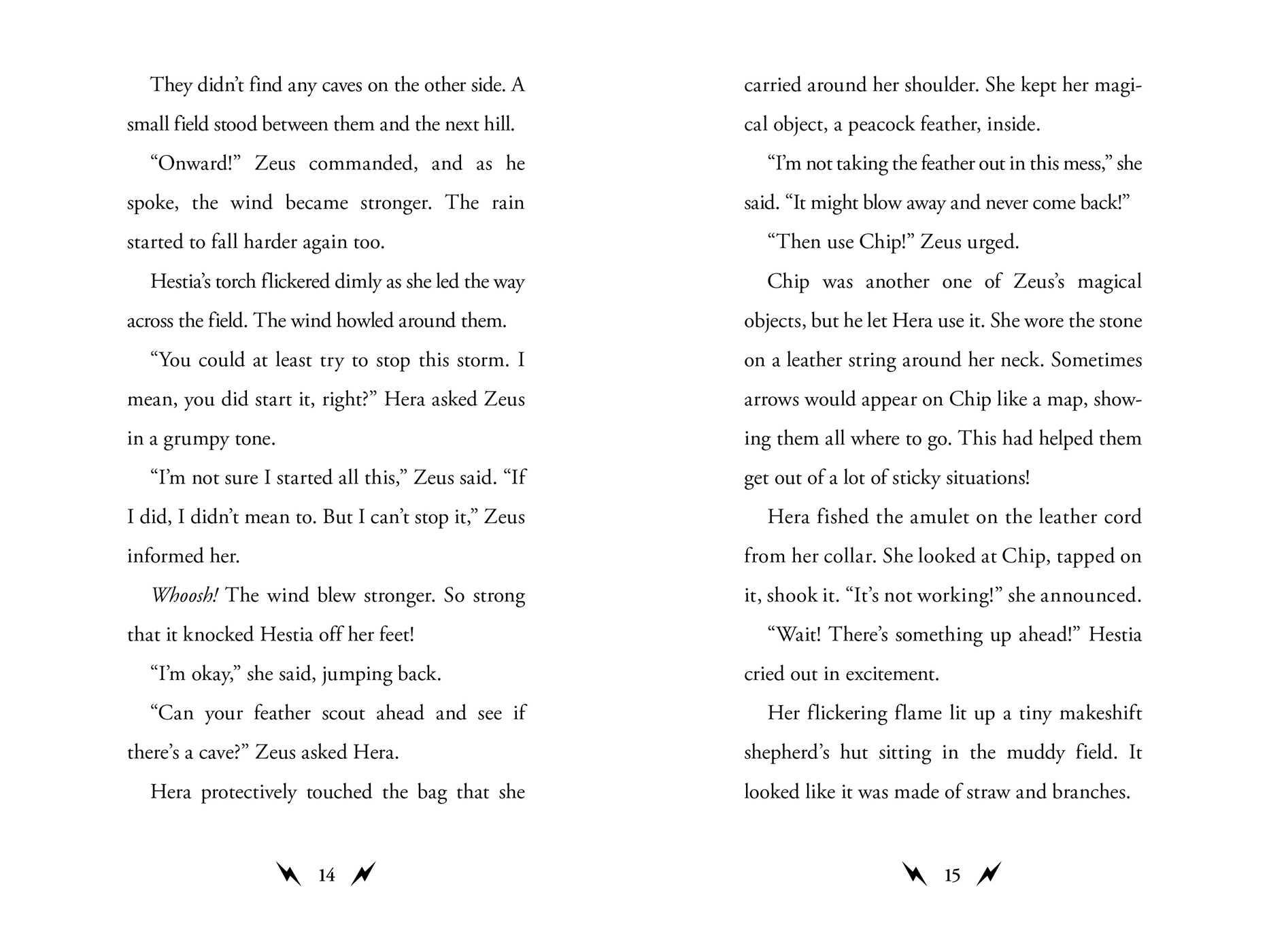 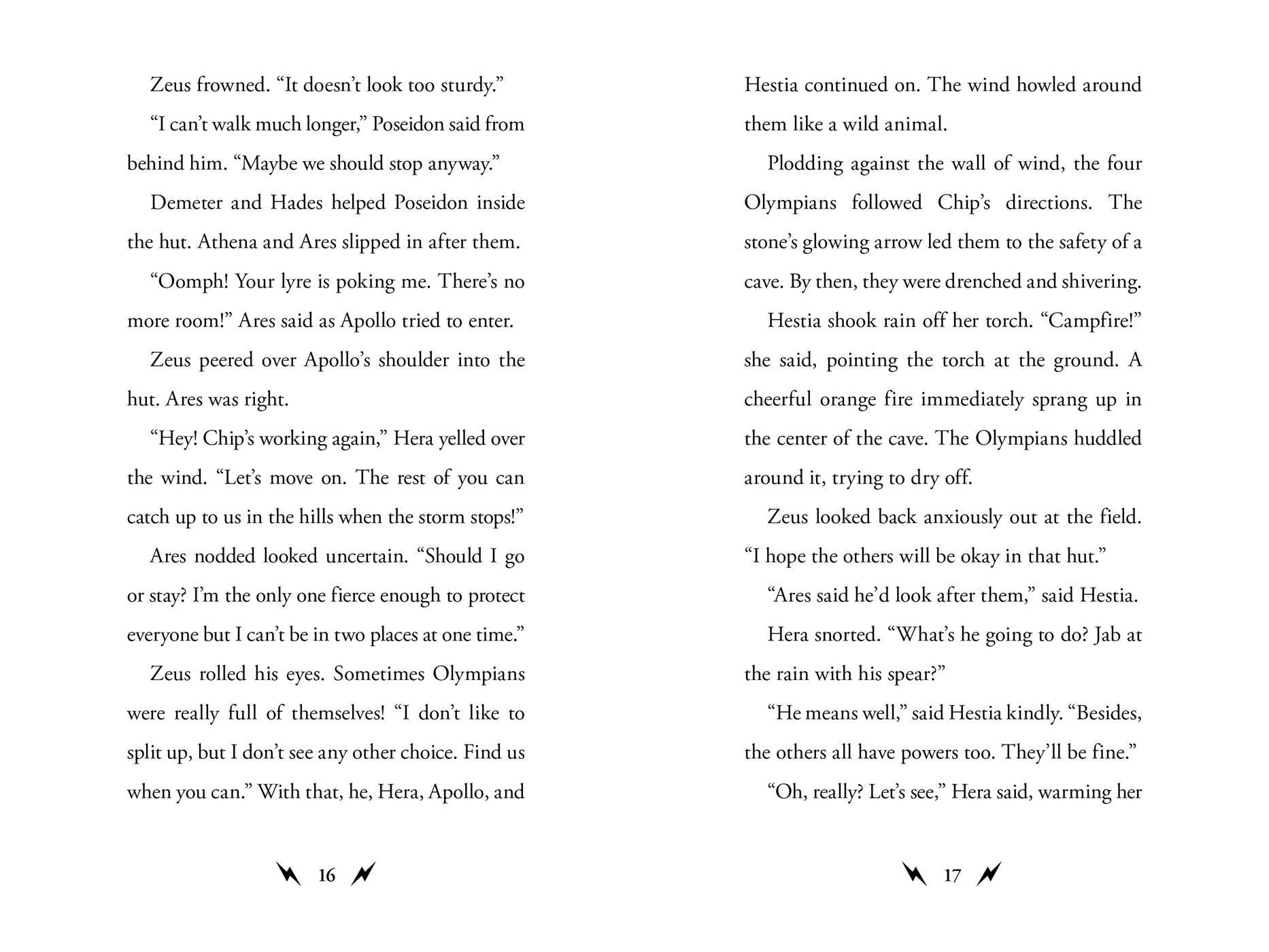 Zeus and the Olympians head to the Peloponnese to save Apollo’s twin sister, who’s under a sleep spell, in this Heroes in Training adventure.

Zeus and the Olympians are off to find Apollo’s twin sister, Artemis, who was captured by the Cronies and separated from her brother. But Titan Crius, who rules the area, has Artemis under a special spell that is making her sleep, which doesn’t make a rescue easy! Can the Olympians manage to sneak away from Crius and his pesky Pandi—warriors with ears that can hear for miles—and save a sleepy Artemis, or are they in for a tough awakening?

CHAPTER ONE Zap!
Come on, guys. Run for the hills!” Ten-year-old Zeus yelled to the eight Olympians around him.

He looked behind him. Some Cronies—half-giant soldiers in King Cronus’s army—were charging toward the Olympians across the plains.

“Where are you tasty tidbits going, Snackboy?” one of the Cronies called out as they stomped toward Zeus and his friends.

Anger rose inside Zeus. It seemed like they couldn’t go anywhere without the Cronies finding and threatening to gobble or clobber them.

Ares, the god of war, ran up next to him. His red eyes were blazing.

“There are only six of them, and nine of us!” he said. “We should stop and fight!”

“They’re five times as big as we are, and ten times as strong!” Zeus reminded him. “Do the math.”

“But we have powers!” Ares argued.

“It’s too risky,” Zeus said. “It’s my job to keep everyone safe. I say we hide in the hills up ahead and figure out our next move.”

Pythia, the Oracle of Delphi, had told Zeus that he was the leader of the Olympians. Ever since then, he felt responsible for their safety. Unfortunately, they were usually in danger, so the responsibility was a huge one!

For some reason, King Cronus—a Titan almost as tall as the hills up ahead—and the other Titans wanted to do away with them. Zeus hadn’t even known he was an Olympian until the Cronies had captured and taken him to Cronus a while back. Zeus smiled to himself, recalling how he’d rescued five Olympians—Hades, Poseidon, Hera, Demeter, and Hestia—by making the king barf them up from his belly!

Ever since then, Pythia kept appearing to them in a hazy mist to send them on quests. She gave them hints that were not too helpful (her foggy glasses sometimes meant things got lost in translation), but they always managed to figure them out just in the nick of time. And only a short time ago, she told Zeus that the Olympians Cronus had barfed up were his brothers and sisters!

They had also found three more Olympians on their journeys: Ares, Athena, and Apollo. Together, the nine Olympians had fought monsters, battled Titans, and been chased by countless Cronies.

And this quest was no different. Pythia had sent them to find yet another Olympian—Apollo’s sister, Artemis. Sure, it had been smooth sailing at first. They’d left from the new city of Athens, crossed the Gulf of Corinth, and landed safely. But then the Cronies had pounced.

Hearing a shriek, Zeus looked over his shoulder. It was a Crony shrieking in pain. He had made a grab for Hestia! Luckily, she had thought fast. She’d used her magical object—a torch that could create fire and send it anywhere—to lash back at him. Safe now, she was catching up to the Olympians again.

“I’ll get you for that!” yelled the Crony. He and his half-giant buddy charged closer and closer. Their muscled chests were bare. Some of them had tattoos or beards. Each carried a shield and a weapon—either an enormous club or a sharp sword. Basically, they were scary-looking!

“If we can make it to the hills, we might lose them!” Zeus shouted toward the others.

The rocky hills ahead were filled with cracks, caves, and crevices: the perfect cover for small Olympians to hide from half-giant Cronies.

“Ha-ha! No way! You can’t escape us, Olympians!” one of the Cronies growled. And then another sound filled the air.

“Yow!” It was Poseidon yelping in pain.

He had tripped over his trident—a three-pronged magical weapon that looked sort of like a pitchfork. Now he was sprawled facedown in the dirt.

Demeter quickly stopped and reached out a hand to help him up. Poseidon tried to stand. He winced and then fell right back down.

“I think I did something to my ankle,” he said. “You guys need to keep going!”

“Go!” Poseidon yelled at her.

“No! Not without you!” Demeter cried.

The other Olympians hadn’t even noticed that Poseidon was down. Zeus waved Demeter on and doubled back toward his brother.

Unfortunately, one of the Cronies got to Poseidon first. The half-giant grinned a cruel smile. He raised his club above his head.

“No! Leave him alone!” Zeus bellowed in a voice like booming thunder. A surge of panic flowed through him. There was no way he could get there in time! He grabbed the lightning-bolt-shaped dagger that hung from his belt. He had found Bolt, one of his magical objects, in the temple at Delphi where he’d first met the Oracle. It had been the beginning of his epic quest to gain power for the Olympians.

Once drawn, the dagger immediately sprang to its full size—five feet long—and gleamed in his hand. He raised his arm, holding it skyward as a terrible anger filled him. “Get the Crony!” Zeus yelled, hurling Bolt in the half-giant’s direction.

Zap! Bolt shot forward and struck Poseidon’s half-giant attacker. The Crony flew backward, slamming into the Crony behind him, who slammed into another behind him, knocking them down like dominoes.

At the same time, dark, angry storm clouds that mirrored Zeus’s anger gathered in the sky above them. A storm wind whipped up out of nowhere. Lightning streaked down from the clouds, sending the Cronies scattering.

Meanwhile, Demeter and Hades returned to grab Poseidon. They each lifted him up by one arm and helped him limp away. They and the other Olympians stared at Zeus, wide-eyed. It seemed like he must be causing the storm. But he didn’t notice. More anger filled him, darker and blacker. The fury of the storm grew blacker too. Bolt had returned to Zeus and he held Bolt above him as the wind whipped around him.
Joan Holub