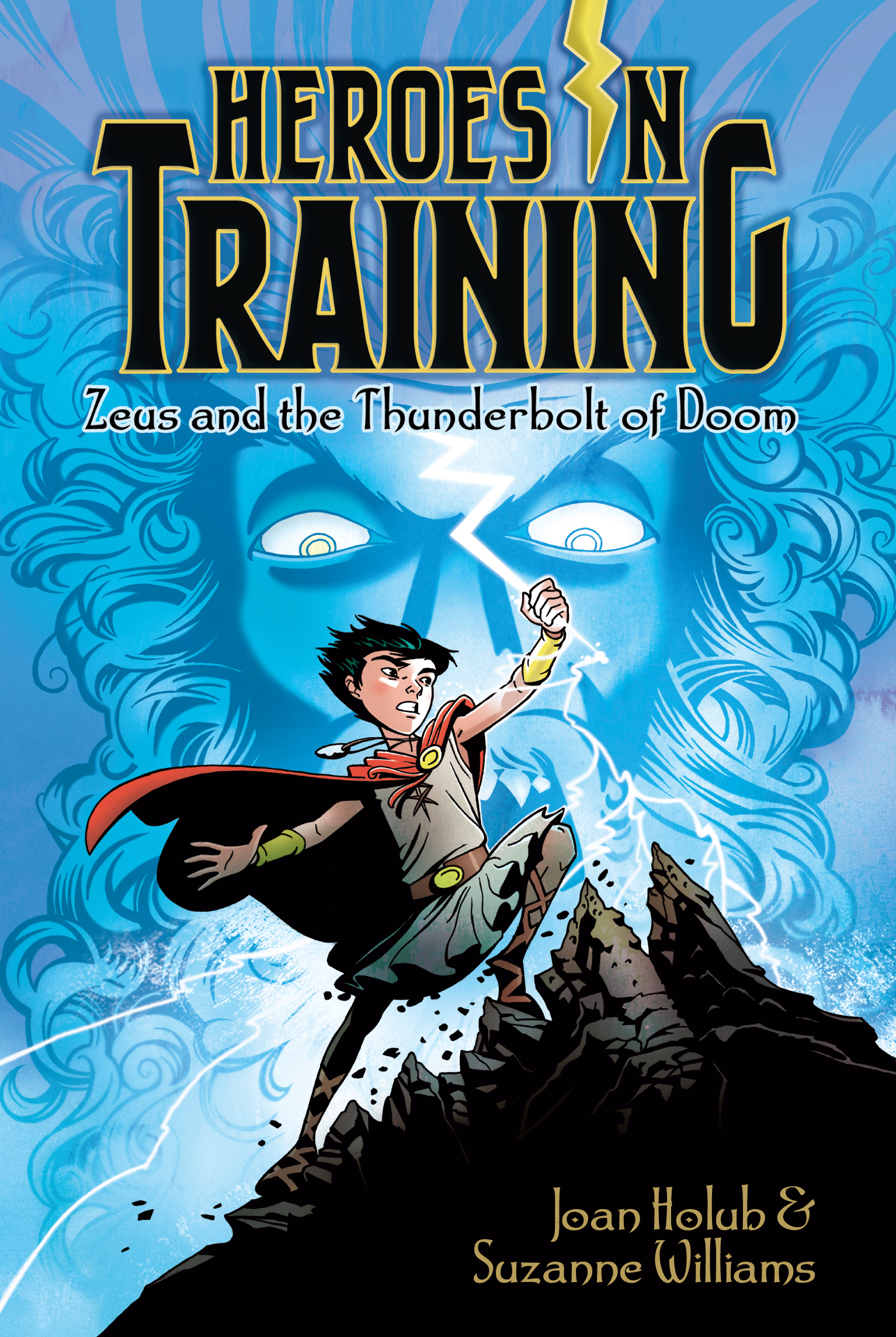 Zeus and the Thunderbolt of Doom

After pulling a magical thunderbolt from a stone, ten-year-old Zeus goes on the adventure of a lifetime in this thrilling start to a brand-new series!

The terrible Titans—merciless giants who enjoy snacking on humans—have dominated the earth and put the world into chaos. But their rule is about to be put to the test as a group of young Olympians discover their powers and prepare to righteously rule the universe....

Ten-year-old Zeus is mystified (and super-annoyed) by the fact that he keeps getting hit by lightening. Every. Single. Year. He also longs for adventure, as he has never been far from the cave where he grew up.

Zeus gets his wish—and a lot more than he bargained for—when he is kidnapped by dangerous, giant Titans! In self-defense, Zeus grabs the first thing he sees—an actual thunderbolt he pulls from a stone that is covered in mysterious markings. Zeus is the only one who can decipher the markings, and sets off on a quest to rescue his fellow Olympians from the evil Cronus. Armed with his trusty thunderbolt (named Bolt, of course), Zeus is on an adventure of a lifetime—and a journey to fulfill his destiny as King of the Gods.

FLASH! LIGHTNING ZIGZAGGED DOWN from the sky.

Crack! It struck a hundred-year-old oak tree and split it in half. A tremendous clap of thunder boomed overhead.

“Yikes!” shouted ten-year-old Zeus. He dropped the wooden sword he’d been practicing with. Leaping out of the way of the falling tree trunk, he took off running. He had a feeling the next bolt would be aimed at him. Why? Because he’d been struck by lightning dozens of times already in his short life.

A wild wind whipped through his dark hair as he raced for safety. With his heart beating faster than a hummingbird’s wings, Zeus dove through the entrance of a cave. A new lightning bolt struck the dirt just outside it, barely missing his foot.

Flash! Boom! The storm raged all around him as he cowered behind a boulder. This cave was his home—the only one he’d ever known. And as far back as he can remember, thunderstorms had been a daily event here in Crete.

He was terrified of them. Who wanted to be hit by lightning after all? It tossed you into the air and rattled your brain. He ought to know!

But that wasn’t the scariest part. Each time he’d been struck, he’d heard a voice murmuring to him, “You are the one.” What could it mean?

Another flash of lightning sliced through the clouds, followed by rumbling thunder. Rain lashed the ground. It flattened the grasses in front of the cave and churned the dirt to mud. But then, as suddenly as it had begun, the thunderstorm moved off. Clouds lifted, the sun came out, and the earth began to dry again.

Feeling braver now, Zeus stuck his thumbs in his ears and wiggled his fingers. “Nyah, nyah, you missed me,” he taunted toward the sound of distant thunder.

Nearby he heard the clanking sound of a bell followed by a bleat. Maa! A goat trotted into view. “Amalthea!” He threw his arms around the goat’s neck, glad to see her unharmed.

Moments later a nymph slipped free of a slender willow tree and scampered over to milk the goat. When she finished, she wordlessly handed Zeus a rich, creamy cup of milk. He drank it down in a single gulp, then nodded to her in thanks.

Stomp! Stomp! Stomp! The ground beneath them began to shake. It sounded like a whole army was heading their way. The nymph’s eyes went wide.

“Hide!” Zeus hissed. He fled to the cave again while she leaped into the willow. Merging with its trunk and branches, she went invisible. Peeking out from behind the boulder, Zeus was relieved to see that Amalthea was nowhere in sight. He hoped she would stay away until this new danger passed.

Before long, three men marched into the clearing. Half-giants, by the look of them. They were so tall that their heads were even with the top of the nymph’s willow. Yet they weren’t as tall as a true Titan giant. True giants stood as tall as oaks!

These half-giants wore polished helmets and carried spears. Two letters were carved on their iron helmets and armor: KC. Which stood for “King Cronus.” Which meant they were Cronies—soldiers working for the Titan king.

Zeus shuddered. Cronies terrorized the countryside, stealing money and food from farmers and villagers. Anyone who resisted was dragged off to a dungeon—or worse. He cringed lower in his hiding place.

One of the half-giants, a Crony with a double chin, scratched his big round belly. He gazed down the mountainside. “Lots of apple orchards down there,” he said. “Should be easy pickings.”

A black-bearded Crony laughed. “Especially since we can force the farmers to do the picking for us!”

Zeus trembled with anger. Half of him was ready to tell those half-giants off. But the other half was too chicken. Besides, what could he do? He was only a kid. They’d crush him like a bug under their humongous sandals!

He’d heard tales of others who’d tried to fight and had failed. Now everyone pretty much bowed down to the Cronies. It beat getting stomped.

Maa! Maa! Suddenly he heard the faint ringing of Amalthea’s bell again. Oh no! She was coming back.

As the clinking grew louder, the Cronies spotted her. “Mmm. I fancy goat meat for supper,” the double-chinned one said. He drew back his spear. Zeus opened his mouth to yell, Stop! But before he could, the half-giant dropped his weapon.

“Yeowch!” Double Chin yelped, slapping the back of his neck. Meanwhile, Amalthea trotted downhill again, out of reach.

The other two Cronies frowned at him. “What’s with you?” Blackbeard asked.

“I got stung by a bee!” Double Chin grumped.

Zeus grinned as he watched the bee buzz around the half-giant’s head and then fly off. It was Melissa.

Ever since he’d mysteriously arrived at the cave as an orphaned baby ten years ago, she had kept watch over him along with the nymph and Amalthea. He was glad for their companionship. Still, he did often wonder who his parents were and why they’d abandoned him.

The third half-giant, who sported a huge tattoo of a lion on his shoulder, looked around nervously. “We should go,” he said. “In case there are more bees.”

Zeus almost laughed aloud to think of King Cronus’s fearsome soldiers being afraid of something as small as a bee. Normally Melissa wouldn’t even hurt a fly. But cruel half-giants deserved whatever she could dish out.

“What’s that?” Double Chin asked, staring toward the cave. Zeus shivered. Had he been spotted? If so, he was doomed! But then he realized what the Crony was really staring at—Zeus’s drinking cup. He’d left it on the ground in full view!

Lion Tattoo was first to reach the cup. Picking it up, he sniffed it curiously. Then he held it upside down over the palm of one hand. “Fresh milk,” he grunted as a few white drops trickled out. “Someone’s here.”

All three Cronies looked toward the entrance to the cave. Ducking his head, Zeus tucked himself small. If only he could merge into the boulder like the nymph had merged with the tree.

Footsteps pounded closer. Hot breath. Suddenly Zeus was plucked from his hiding place like a weed from a garden. His legs dangled helplessly in the air and his arms spun.

Holding him by two fat fingers, Double Chin stared at him, eye-to-eye, licking his chops. Zeus squeezed his eyes shut, as if doing so might make the half-giants disappear. Didn’t work. And it didn’t drown out the terrible sound of Double Chin’s next words either.

Zeus and the Thunderbolt of Doom