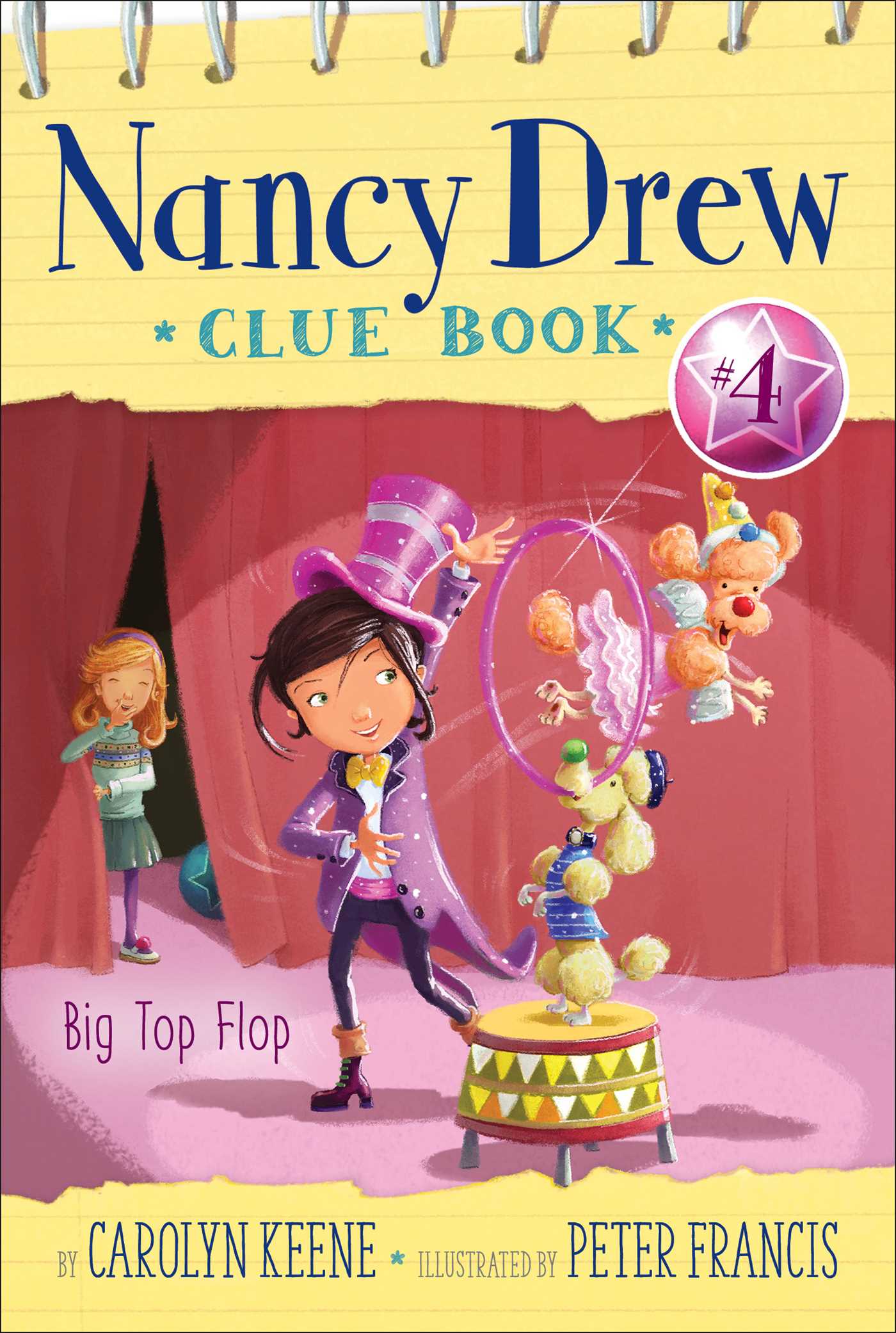 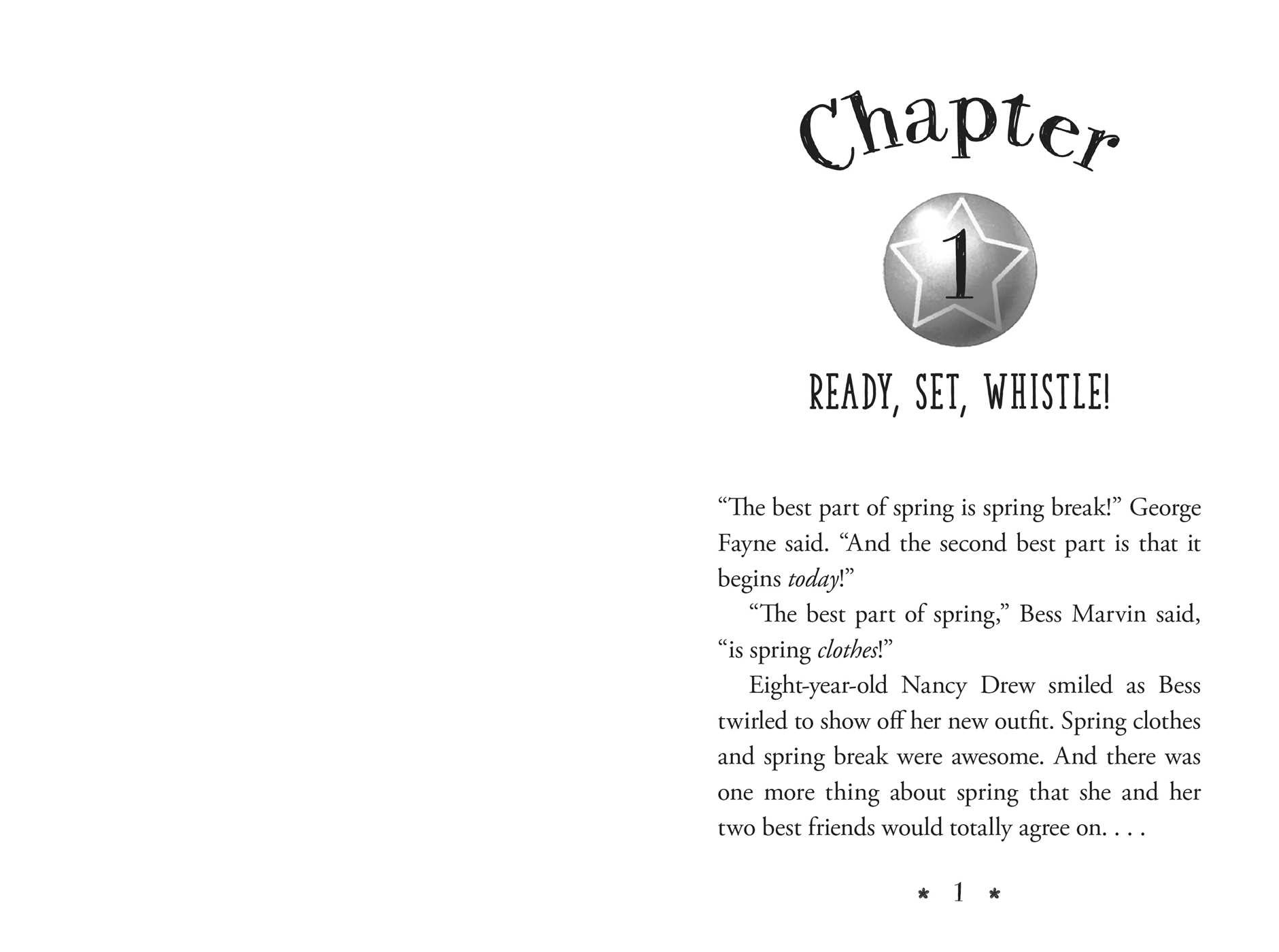 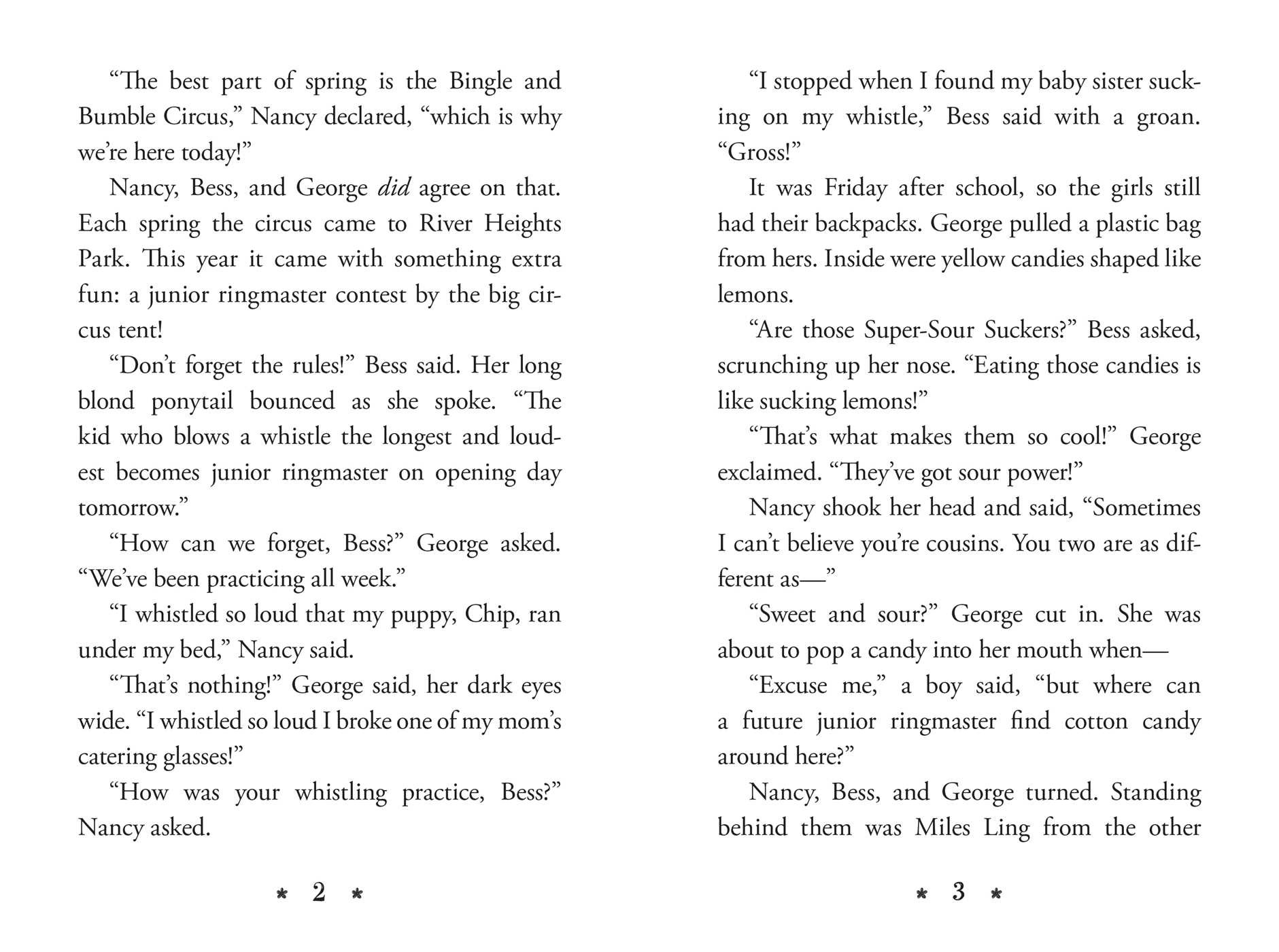 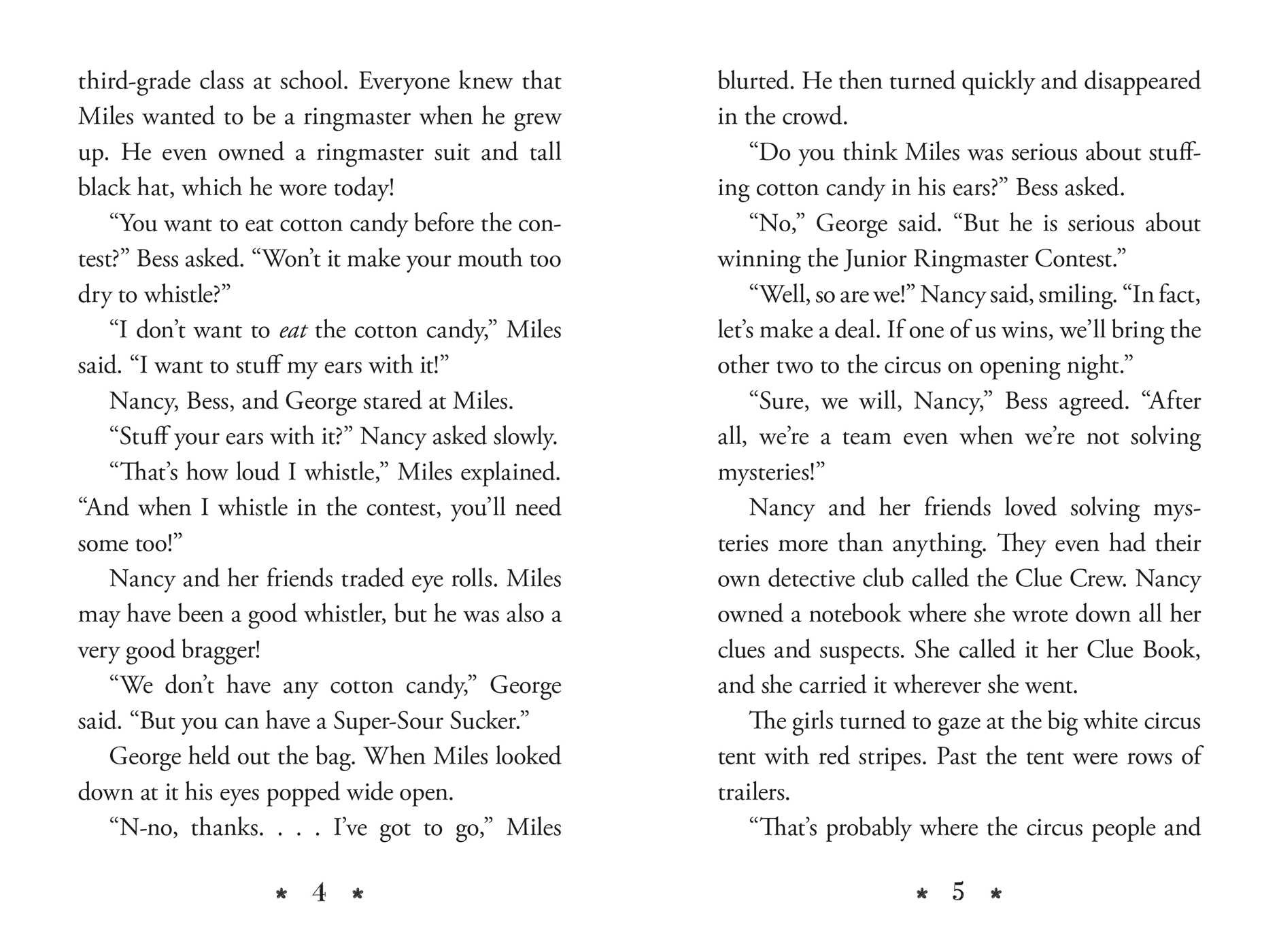 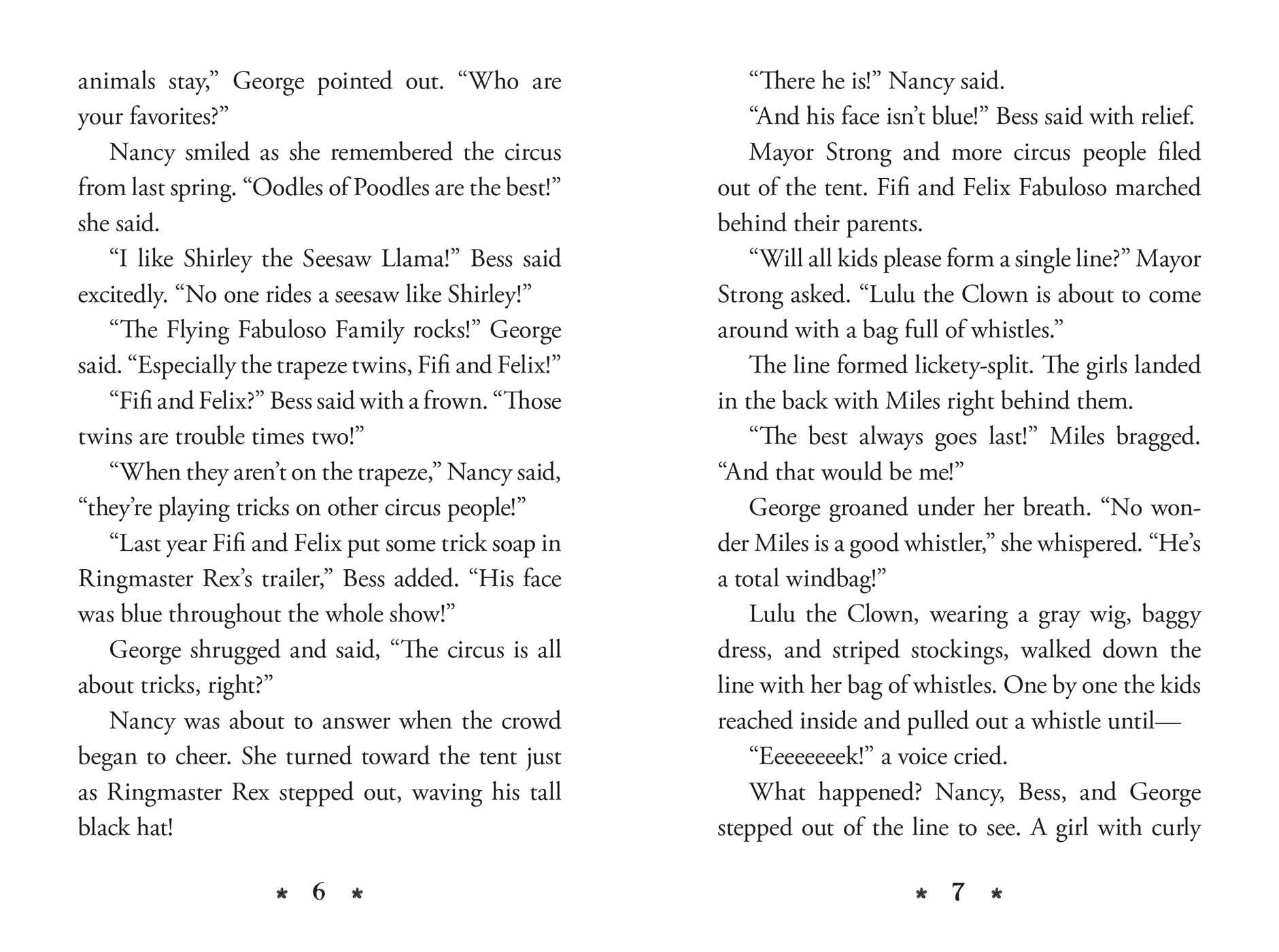 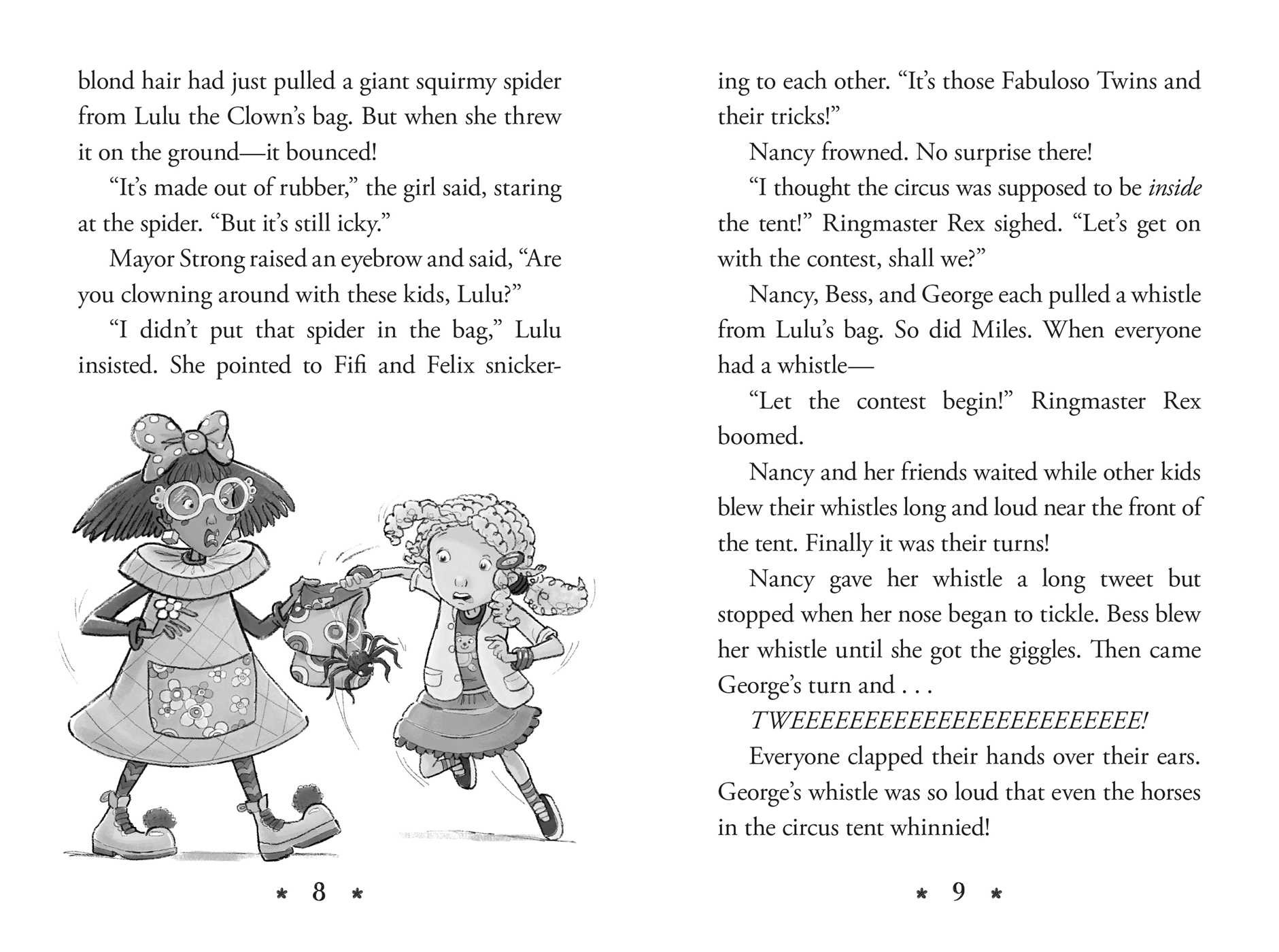 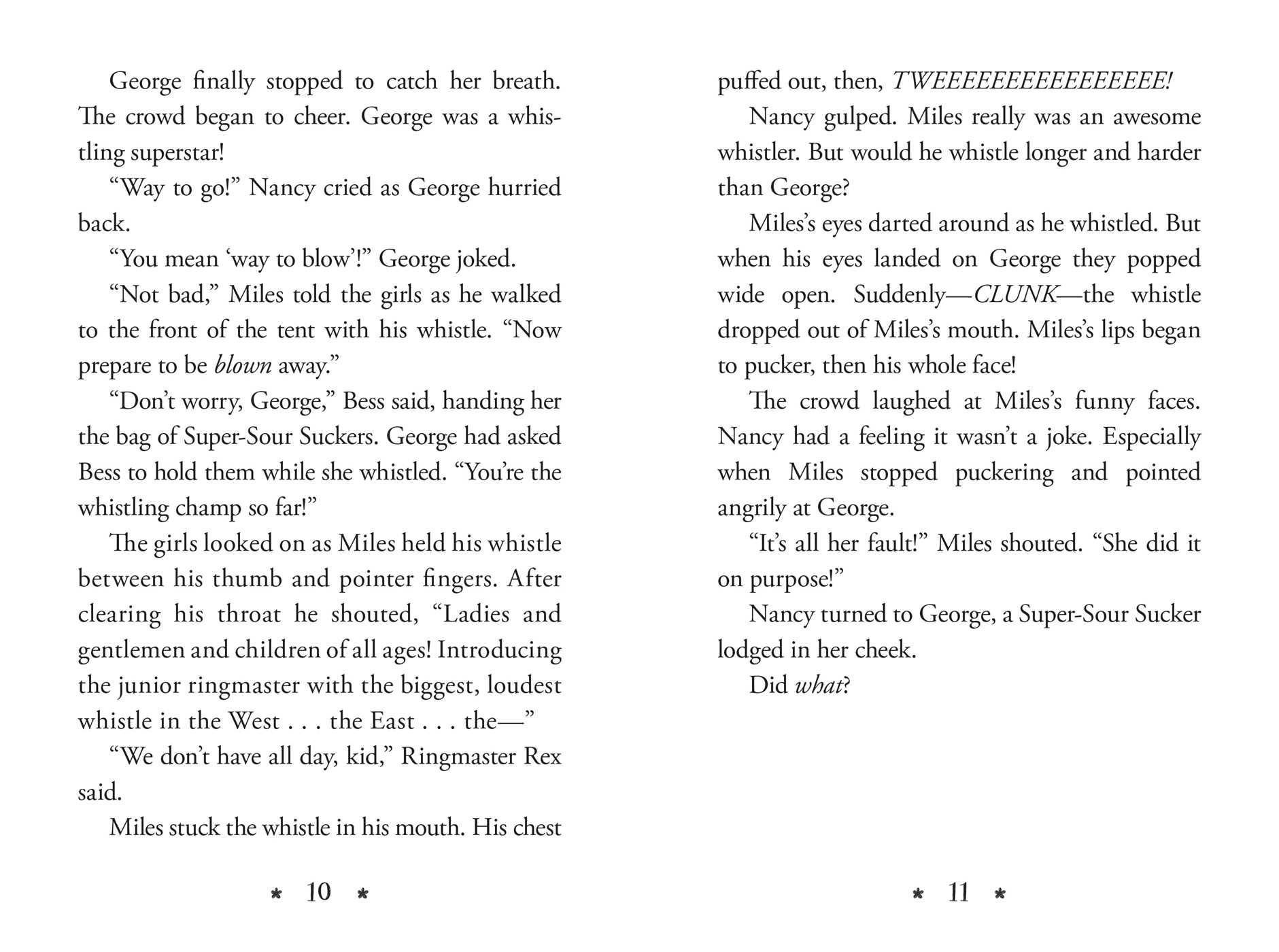 Help Nancy and her friends track down the crafty clown who stole George’s junior ringmaster whistle in the fourth book in an all-new, interactive Nancy Drew chapter book mystery series. Includes space for readers to jot down their own ideas and solutions to the case!

The Bingle and Bumble Circus is coming to River Heights, and Nancy, Bess, and George are super excited to see the clowns, animals, and acrobats. But most of all, they’re excited about the Junior Ringmaster whistling contest! To win, all they have to do is be the kid who whistles the loudest and the longest. The winner of the contest will get to be Junior Ringmaster at the circus’s opening night and they’ll get a shiny silver whistle as a prize!

After George wins, her friends can’t wait to see her in the show. But when the time comes, she blows and blows her whistle…and nothing comes out. When she checks her whistle, George realizes that it was switched with a broken one! Will Nancy and her friends find the whistle-snatcher before the circus leaves town?

READY, SET, WHISTLE!
“The best part of spring is spring break!” George Fayne said. “And the second best part is that it begins today!”

Eight-year-old Nancy Drew smiled as Bess twirled to show off her new outfit. Spring clothes and spring break were awesome. And there was one more thing about spring that she and her two best friends would totally agree on. . . .

“The best part of spring is the Bingle and Bumble Circus,” Nancy declared, “which is why we’re here today!”

Nancy, Bess, and George did agree on that. Each spring the circus came to River Heights Park. This year it came with something extra fun: a junior ringmaster contest by the big circus tent!

“Don’t forget the rules!” Bess said. Her long blond ponytail bounced as she spoke. “The kid who blows a whistle the longest and loudest becomes junior ringmaster on opening day tomorrow.”

“How can we forget, Bess?” George asked. “We’ve been practicing all week.”

“I whistled so loud that my puppy, Chip, ran under my bed,” Nancy said.

“That’s nothing!” George said, her dark eyes wide. “I whistled so loud I broke one of my mom’s catering glasses!”

“How was your whistling practice, Bess?” Nancy asked.

“I stopped when I found my baby sister sucking on my whistle,” Bess said with a groan. “Gross!”

It was Friday after school, so the girls still had their backpacks. George pulled a plastic bag from hers. Inside were yellow candies shaped like lemons.

“Are those Super-Sour Suckers?” Bess asked, scrunching up her nose. “Eating those candies is like sucking lemons!”

“That’s what makes them so cool!” George exclaimed. “They’ve got sour power!”

Nancy shook her head and said, “Sometimes I can’t believe you’re cousins. You two are as different as—”

“Sweet and sour?” George cut in. She was about to pop a candy into her mouth when—

“Excuse me,” a boy said, “but where can a future junior ringmaster find cotton candy around here?”

Nancy, Bess, and George turned. Standing behind them was Miles Ling from the other third-grade class at school. Everyone knew that Miles wanted to be a ringmaster when he grew up. He even owned a ringmaster suit and tall black hat, which he wore today!

“You want to eat cotton candy before the contest?” Bess asked. “Won’t it make your mouth too dry to whistle?”

“I don’t want to eat the cotton candy,” Miles said. “I want to stuff my ears with it!”

“Stuff your ears with it?” Nancy asked slowly.

“That’s how loud I whistle,” Miles explained. “And when I whistle in the contest, you’ll need some too!”

Nancy and her friends traded eye rolls. Miles may have been a good whistler, but he was also a very good bragger!

“We don’t have any cotton candy,” George said. “But you can have a Super-Sour Sucker.”

George held out the bag. When Miles looked down at it his eyes popped wide open.

“N-no, thanks. . . . I’ve got to go,” Miles blurted. He then turned quickly and disappeared in the crowd.

“Do you think Miles was serious about stuffing cotton candy in his ears?” Bess asked.

“No,” George said. “But he is serious about winning the Junior Ringmaster Contest.”

“Well, so are we!” Nancy said, smiling. “In fact, let’s make a deal. If one of us wins, we’ll bring the other two to the circus on opening night.”

“Sure, we will, Nancy,” Bess agreed. “After all, we’re a team even when we’re not solving mysteries!”

Nancy and her friends loved solving mysteries more than anything. They even had their own detective club called the Clue Crew. Nancy owned a notebook where she wrote down all her clues and suspects. She called it her Clue Book, and she carried it wherever she went.

The girls turned to gaze at the big white circus tent with red stripes. Past the tent were rows of trailers.

“That’s probably where the circus people and animals stay,” George pointed out. “Who are your favorites?”

Nancy smiled as she remembered the circus from last spring. “Oodles of Poodles are the best!” she said.

“Fifi and Felix?” Bess said with a frown. “Those twins are trouble times two!”

“When they aren’t on the trapeze,” Nancy said, “they’re playing tricks on other circus people!”

“Last year Fifi and Felix put some trick soap in Ringmaster Rex’s trailer,” Bess added. “His face was blue throughout the whole show!”

George shrugged and said, “The circus is all about tricks, right?”

Nancy was about to answer when the crowd began to cheer. She turned toward the tent just as Ringmaster Rex stepped out, waving his tall black hat!

“And his face isn’t blue!” Bess said with relief.

Mayor Strong and more circus people filed out of the tent. Fifi and Felix Fabuloso marched behind their parents.

“Will all kids please form a single line?” Mayor Strong asked. “Lulu the Clown is about to come around with a bag full of whistles.”

The line formed lickety-split. The girls landed in the back with Miles right behind them.

“The best always goes last!” Miles bragged. “And that would be me!”

George groaned under her breath. “No wonder Miles is a good whistler,” she whispered. “He’s a total windbag!”

Lulu the Clown, wearing a gray wig, baggy dress, and striped stockings, walked down the line with her bag of whistles. One by one the kids reached inside and pulled out a whistle until—

What happened? Nancy, Bess, and George stepped out of the line to see. A girl with curly blond hair had just pulled a giant squirmy spider from Lulu the Clown’s bag. But when she threw it on the ground—it bounced!

“It’s made out of rubber,” the girl said, staring at the spider. “But it’s still icky.”

Mayor Strong raised an eyebrow and said, “Are you clowning around with these kids, Lulu?”

“I didn’t put that spider in the bag,” Lulu insisted. She pointed to Fifi and Felix snickering to each other. “It’s those Fabuloso Twins and their tricks!”

Nancy frowned. No surprise there!

“I thought the circus was supposed to be inside the tent!” Ringmaster Rex sighed. “Let’s get on with the contest, shall we?”

Nancy, Bess, and George each pulled a whistle from Lulu’s bag. So did Miles. When everyone had a whistle—

Nancy and her friends waited while other kids blew their whistles long and loud near the front of the tent. Finally it was their turns!

Nancy gave her whistle a long tweet but stopped when her nose began to tickle. Bess blew her whistle until she got the giggles. Then came George’s turn and . . .

Everyone clapped their hands over their ears. George’s whistle was so loud that even the horses in the circus tent whinnied!

George finally stopped to catch her breath. The crowd began to cheer. George was a whistling superstar!

“Way to go!” Nancy cried as George hurried back.

“Not bad,” Miles told the girls as he walked to the front of the tent with his whistle. “Now prepare to be blown away.”

“Don’t worry, George,” Bess said, handing her the bag of Super-Sour Suckers. George had asked Bess to hold them while she whistled. “You’re the whistling champ so far!”

The girls looked on as Miles held his whistle between his thumb and pointer fingers. After clearing his throat he shouted, “Ladies and gentlemen and children of all ages! Introducing the junior ringmaster with the biggest, loudest whistle in the West . . . the East . . . the—”

“We don’t have all day, kid,” Ringmaster Rex said.

Miles stuck the whistle in his mouth. His chest puffed out, then, TWEEEEEEEEEEEEEEEE!

Nancy gulped. Miles really was an awesome whistler. But would he whistle longer and harder than George?

Miles’s eyes darted around as he whistled. But when his eyes landed on George they popped wide open. Suddenly—CLUNK—the whistle dropped out of Miles’s mouth. Miles’s lips began to pucker, then his whole face!

The crowd laughed at Miles’s funny faces. Nancy had a feeling it wasn’t a joke. Especially when Miles stopped puckering and pointed angrily at George.

“It’s all her fault!” Miles shouted. “She did it on purpose!”

Nancy turned to George, a Super-Sour Sucker lodged in her cheek.

Did what?
Carolyn Keene