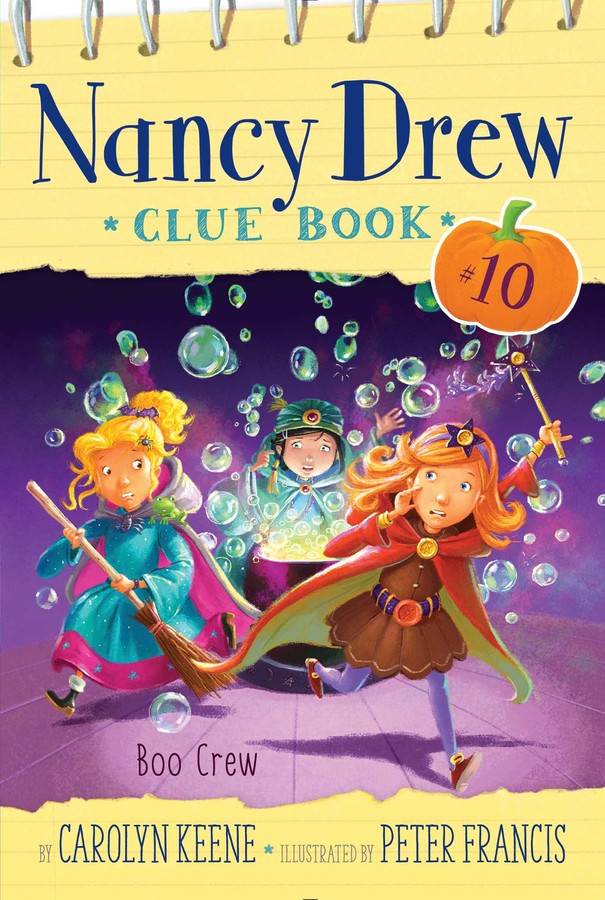 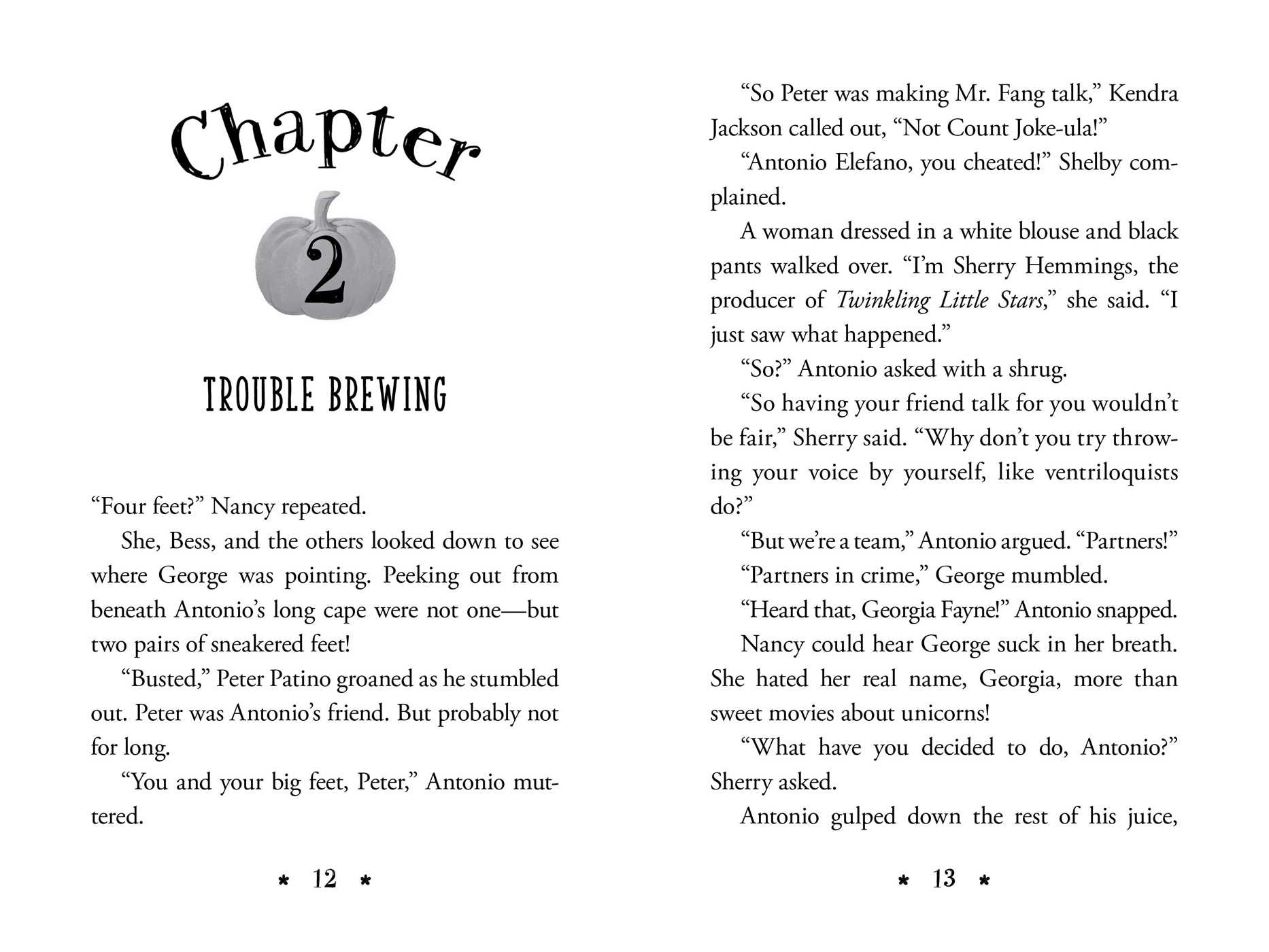 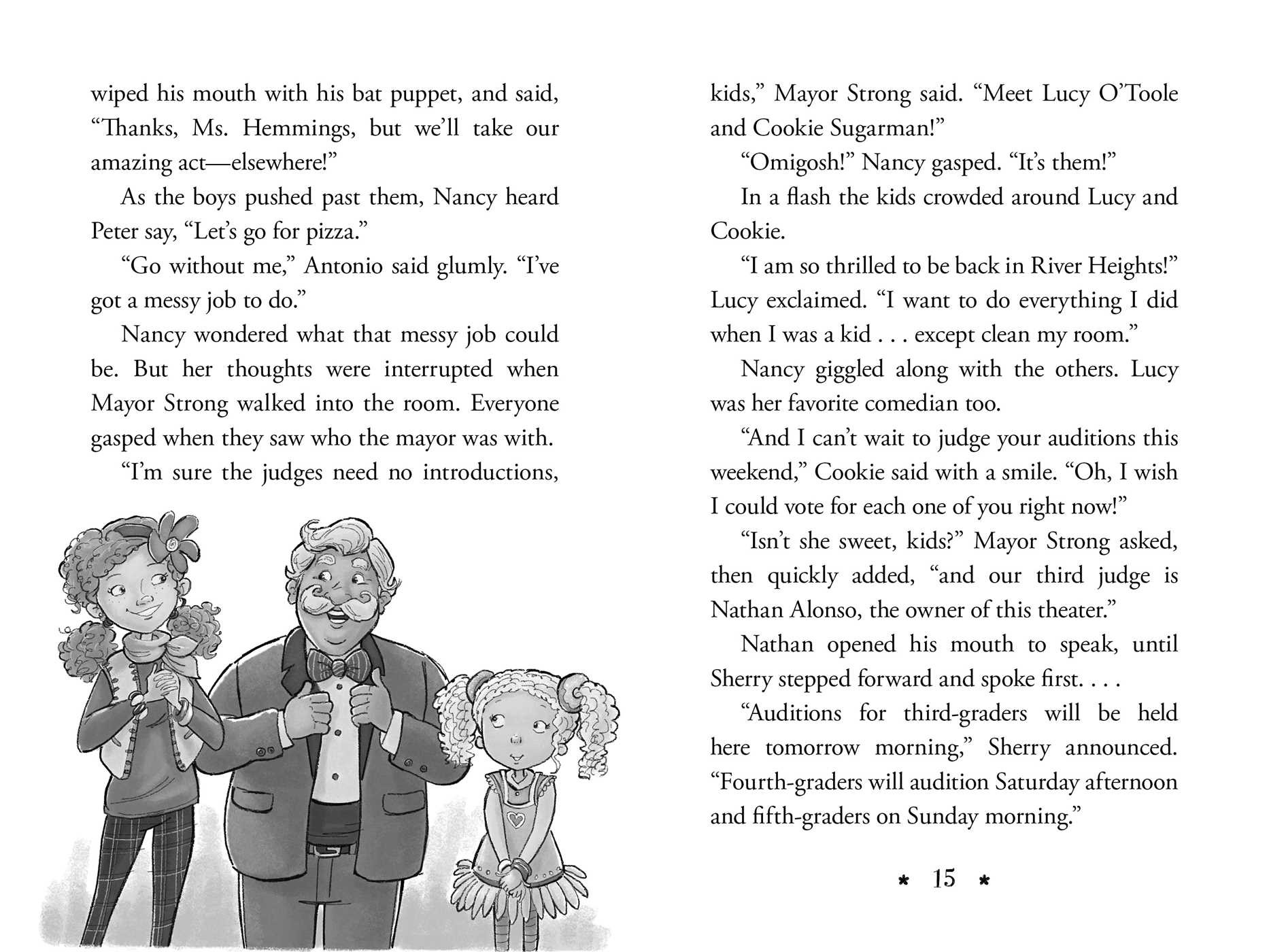 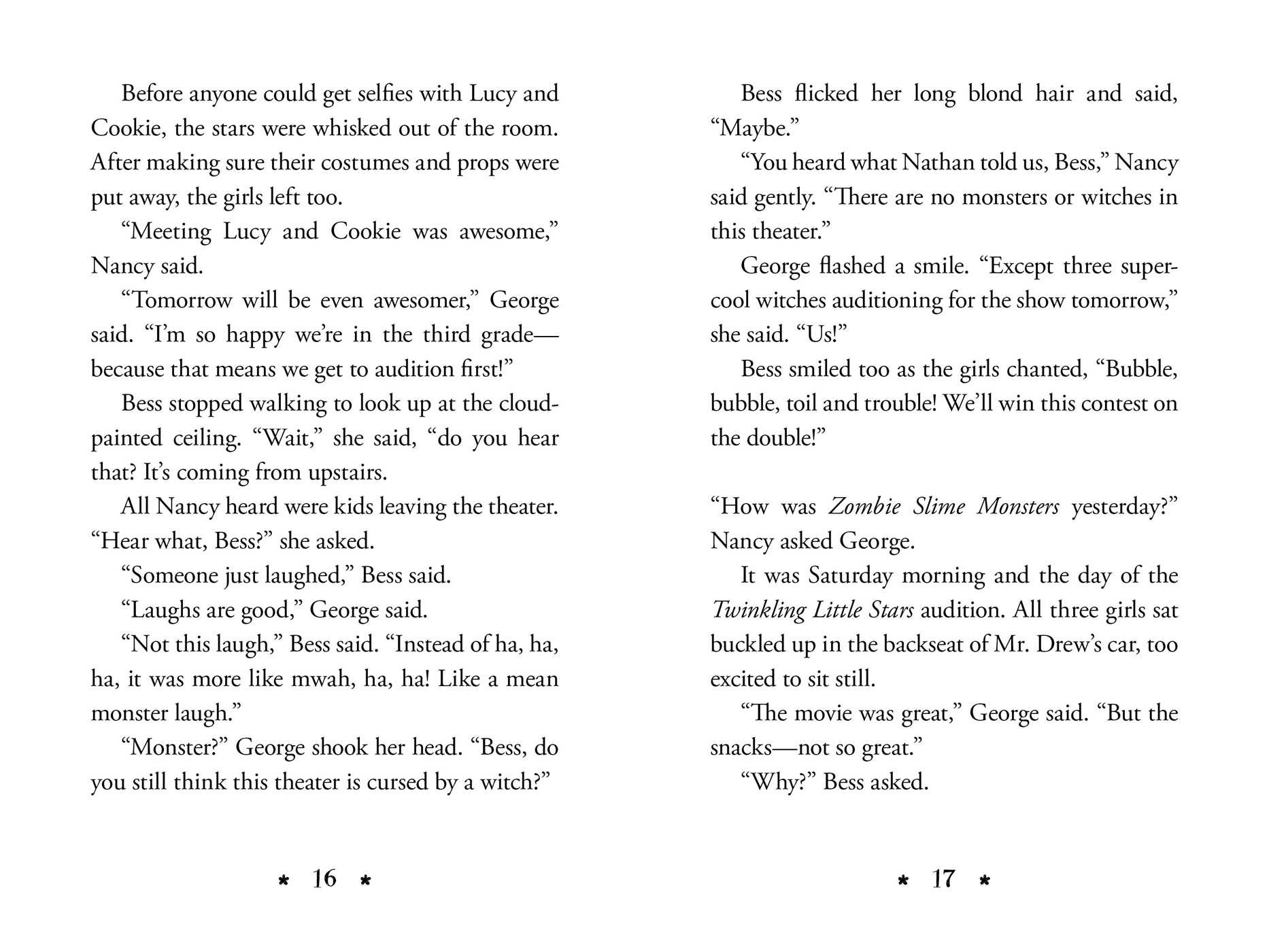 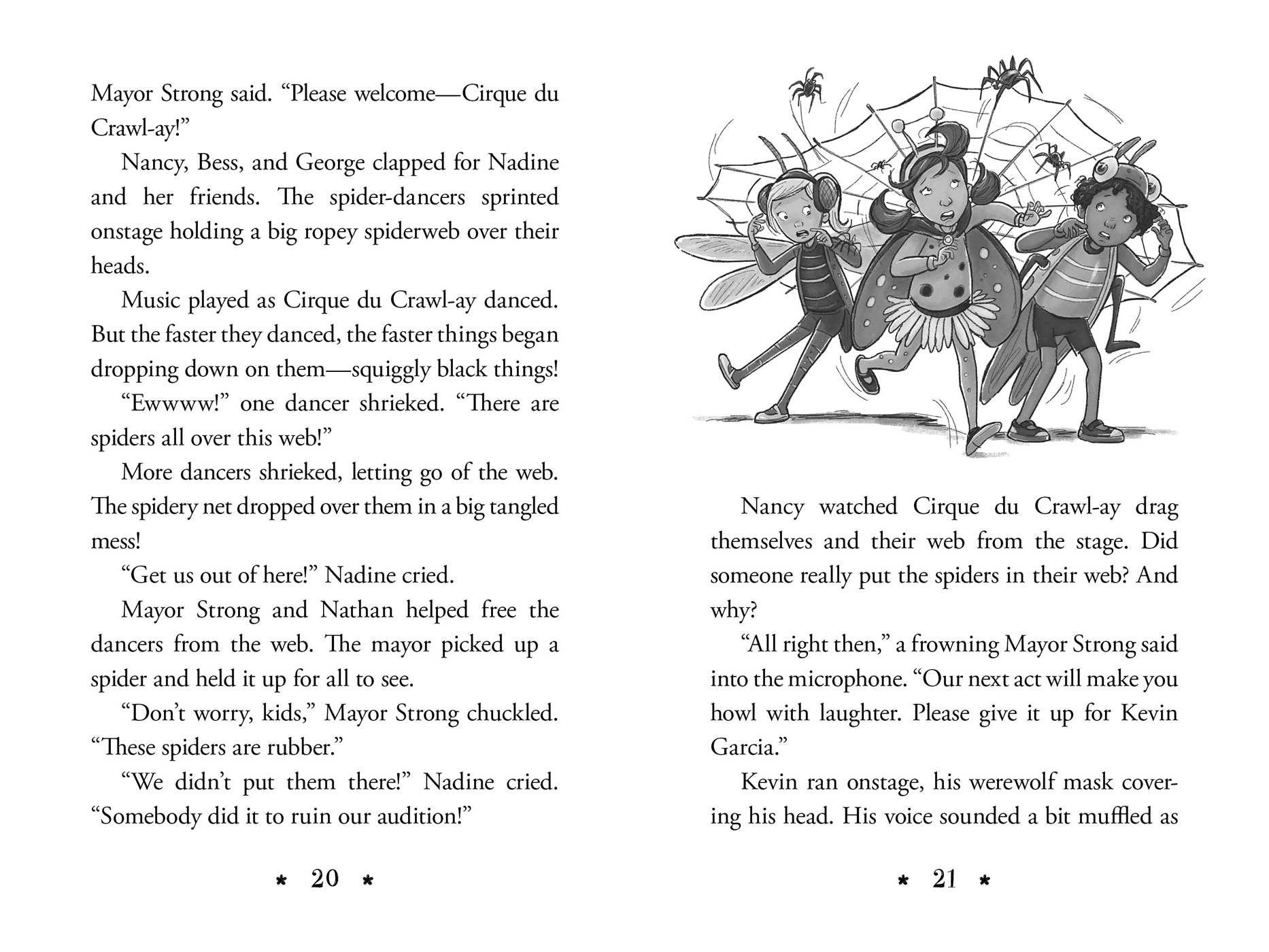 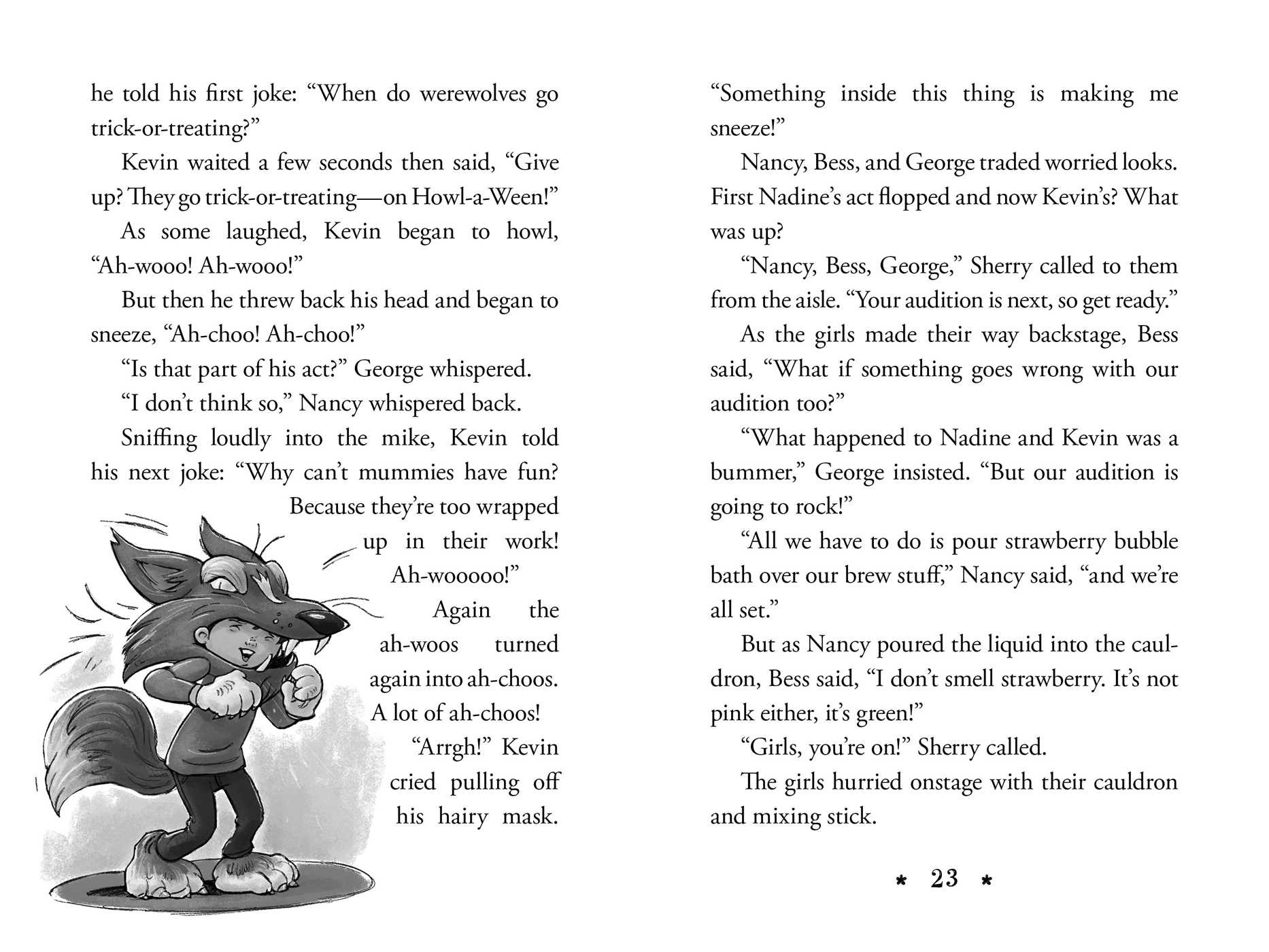 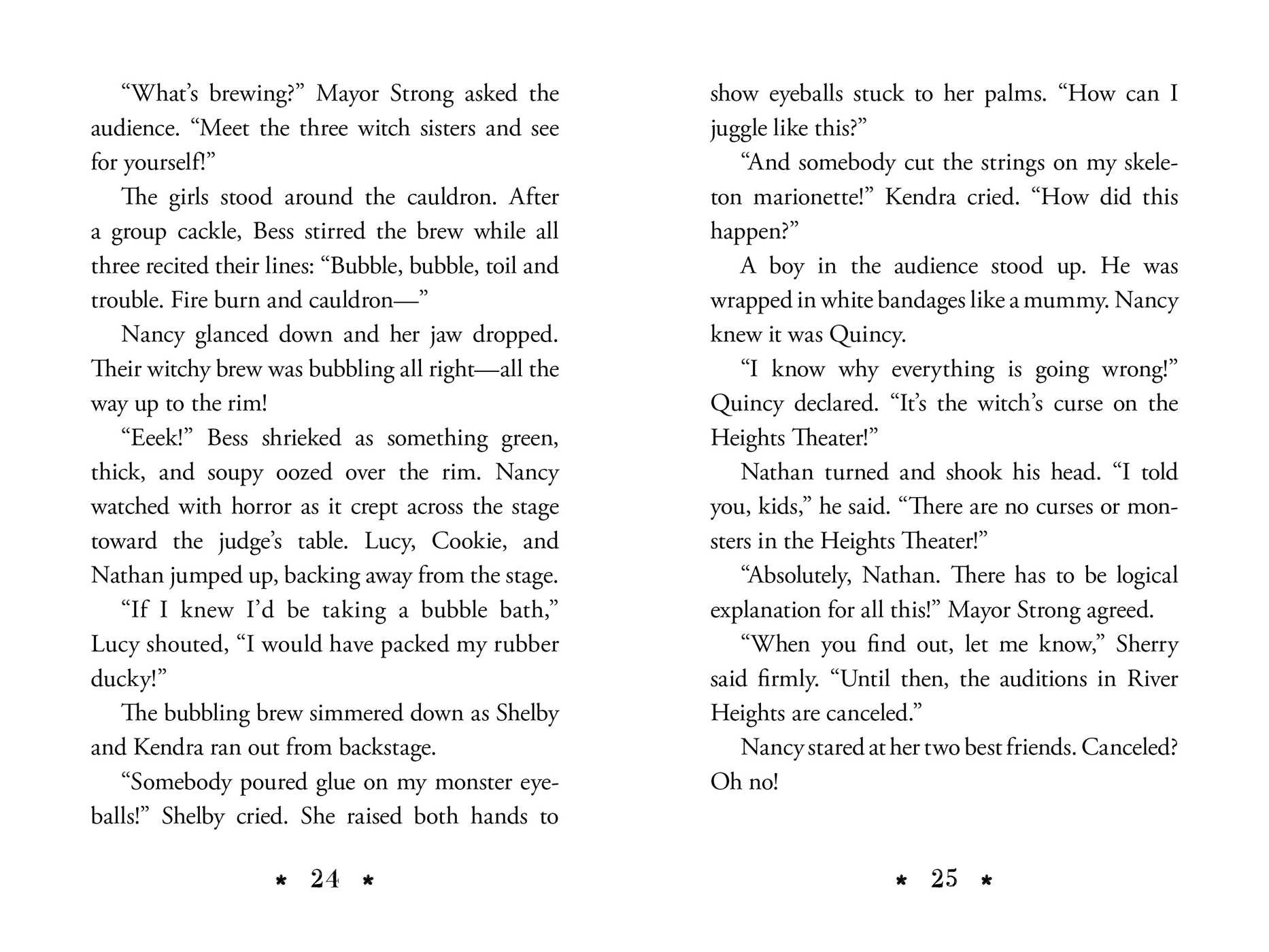 Help Nancy and her friends find the truth behind a haunted theater in the tenth book in the interactive Nancy Drew Clue Book mystery series.

The hit TV show Twinkle Little Stars is coming to River Heights to audition contestants for their upcoming Halloween show. They’ll choose talented kids from all over the country to compete for prizes. Nancy, Bess, and George are dressing up as witches and are planning to create a special potion onstage for the judges.

The recently renovated Heights Theatre has opened its doors for the auditions. The old theatre had been abandoned for fifty years but is now restored to its original beauty. But on the day of the auditions, everything seems to go wrong; the girls’ cauldron over bubbles, a werewolf mask makes its owner sneeze, spider webs fall on the dancers. That’s when the clue crew learns the Heights Theatre is rumored to be haunted—people say ghosts are the reason it stayed empty for so long. But Nancy knows better than to believe in ghosts. She’s sure that the culprit is of the human variety.

Then Bess sees monsters dancing around a piano playing on its own—the keys moving but no is playing it. Could the rumors be true? Is the Heights Theatre really haunted? It’s up to the clue crew—and you—to find out!

READY, SET, SHOW!
“Double, double, toil and trouble!” George Fayne declared. Then she wrinkled her nose and said, “Did witches really talk like that?”

“They spoke that way in William Shakespeare’s play Macbeth,” eight-year-old Nancy Drew said. “I’m glad my dad told me about the old play so we can audition as the three witch sisters!”

George blew dark curly bangs out of her eyes. “?‘Bubble, bubble’ sounds better than ‘double, double,’?” she said. “Why don’t we say that instead?”

“We will have a bubbly cauldron of brew,” Bess said happily, “thanks to my bottle of strawberry bubble bath!”

If the girls’ hands weren’t so full, they would have high-fived. The hit show Twinkling Little Stars was coming to River Heights to audition kids for their TV talent contest.

“I’m glad the auditions are for their special Halloween show,” Nancy said. “We get to dress up two weeks before Halloween!”

“I hope the judges like our brew ingredients,” George said, nodding at the cauldron, “toenail of toad, scale of dragon, tooth of giant—hairball of cat!”

Bess stuck her tongue out and made gagging sounds. “Slime-green popcorn? I’ll stick to crunchy caramel!”

Nancy giggled and said, “Are you sure you’re cousins?” You’re as different as—”

Bess used both hands to grab the handle of the bag.

“This bag is getting heavy,” she said. “Why do we have to drop off our costumes and props today? It’s only Friday, and the auditions are Saturday and Sunday.”

“Everyone auditioning has to, Bess,” Nancy said. “It’s the contest rules.”

The girls were glad to reach the theater where the auditions would be held. The Heights Theater was old-timey but looked brand new with a fresh coat of paint and a shiny gold front door.

“I wonder if we’ll meet the judges today,” Nancy said as they filed inside.

“I can’t believe Lucy O’Toole is one of the judges,” George said. “I think she’s the funniest comedian, and she grew up right here in River Heights.”

“And I can’t believe the other judge is the actress Cookie Sugarman!” Nancy said. “Can you believe she’s only nine years old and is supposed to be the sweetest star in Hollywood!”

“Even Cookie’s movies are sweet,” Bess said. “I saw The Princess and the Unicorn three times!”

“The Princess and the Unicorn,” George scoffed. “That movie was so sweet I had to brush my teeth three times!”

Bess rolled her eyes at George. “Who’s the third judge, Nancy?” she asked.

“It’s the owner of this theater,” Nancy replied. “I think his name is Nathan.”

“Who wouldn’t want to own this place?” George asked as they looked around the lobby. “It’s awesome!”

“It looks like a fairy-tale castle,” Bess said, pointing upward. “Even the ceiling is painted blue with white clouds!”

Nancy couldn’t believe her eyes either. The old Heights Theater had just reopened after being rebuilt. The Twinkling Little Stars auditions would be the first event there in more than seventy years!

“Do you believe this building used to be old and creepy?” Nancy said. “We even thought it was haunted!”

More kids walked by holding costumes and props. One was Quincy Taylor from the girls’ third-grade class. Quincy held a mummy costume as he stopped to face the girls.

“Who says this theater isn’t still haunted?” Quincy asked them.

“What do you mean, Quincy?” Nancy asked.

“You heard about the curse, didn’t you?” Quincy asked. “About a hundred years ago an actress named Nora Westcott starred in a play here. Nora was mad when the director replaced her with a bigger star.”

Quincy lowered his voice almost to a whisper. “The director didn’t know that Nora was also a witch!”

“We’re witches too,” Bess said with a smile. “Bubble, bubble, toil and trouble—”

“Nora was a real witch,” Quincy cut in, “and there was trouble all right.”

“The Heights Theater has been haunted ever since Nora’s curse,” Quincy answered. “By ghosts and monsters!”

“Not true!” a deep voice said.

The kids turned to see a tall man with dark hair standing behind them.

“I am Nathan Alonso, the owner of this theater,” the man said. “The only thing that ever went bump in the night was when a clumsy stagehand dropped a set piece.”

“So there are no ghosts or monsters?” George asked.

Quincy smiled. “You’ve got to be right, Mr. Alonso,” he said. “No ghosts or monsters here. Whew, what a relief!”

Nathan walked away. The girls turned to Quincy with surprise.

“What made you change your mind so fast, Quincy?” George asked. “Because he’s the owner of the theater?”

As Quincy walked away, Bess turned to Nancy and George, her blue eyes wide.

“What if Quincy’s right?” Bess asked. “What if this theater is filled with monsters and ghosts?”

Bess nodded. “Yes, remember when they tried to help us solve the mystery of Murray the Monster Mutt?” she sighed. “They weren’t much help.”

“Who cares about grabbing ghosts?” Nancy asked with a smile. “I like our own club, the Clue Crew!”

As the Clue Crew, Nancy, Bess, and George solved mysteries all over River Heights. Nancy even owned a clue book where she wrote down all of their suspects and clues.

“Quincy can look for ghosts if he wants to,” George said as she rolled the cauldron. “I want to find the prop room so I can park this pot!”

Nancy, Bess, and George followed the others down a hall to a large room. Inside, kids were busy hanging up costumes and placing props on shelves.

A few feet away was another kid wearing a hairy werewolf mask. Nancy recognized Kevin Garcia’s voice as he told monster jokes. . . .

Kevin threw back his head and howled, “Ah-woooo!”

Nancy wasn’t surprised to see their friend Nadine auditioning for Twinkling Little Stars too. She was the best dancer and actress in Ms. Ramirez’s third-grade class.

“Is that a spider costume you’re hanging up, Nadine?” Nancy asked.

“Not just any spider,” Nadine said. She turned to three other kids hanging up the same costumes. “We’re Cirque du Crawl-ay, and we’re dancing with a giant spiderweb!”

Across the room a small crowd was watching Antonio Elefano, dressed as a vampire. The girls traded smirks. If Nadine was the class actress—Antonio was the class pest!

“Tell me, Mr. Fang,” Antonio asked a bat puppet on his hand, “what is a vampire’s favorite snack?”

Antonio used his other hand to lift a glass of grape juice to his lips. While he gulped it down the puppet said, “Scream of tomato, Count Joke-ula. Yum!”

“Pretty neat,” Bess admitted. “How did he do that?”

“I don’t know,” Nancy admitted, “Since when is Antonio such a good ventriloquist?”

Suddenly George pointed to the floor underneath Antonio’s long cape. “Hey!” she said. “Since when do vampires—have four feet?”
Carolyn Keene