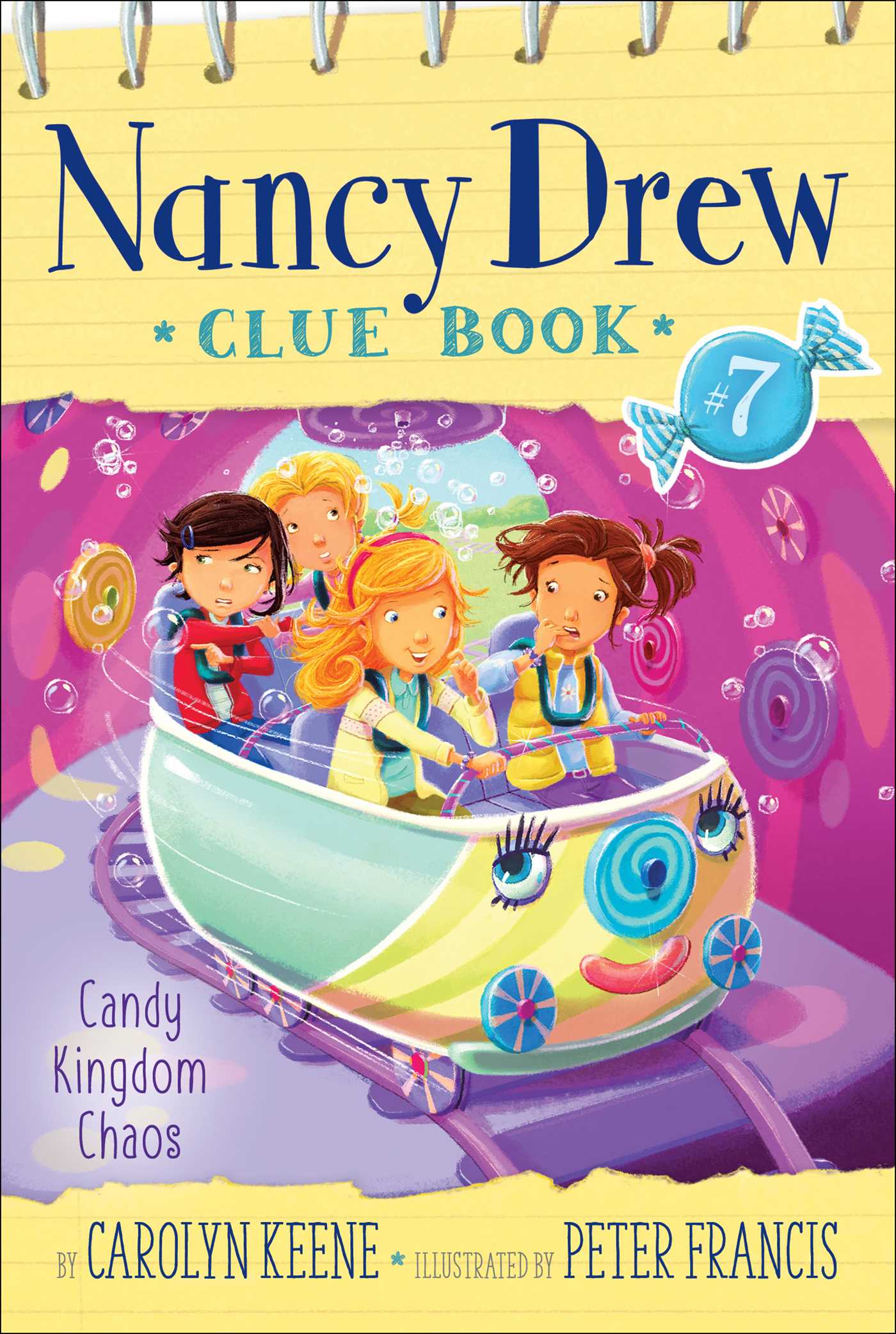 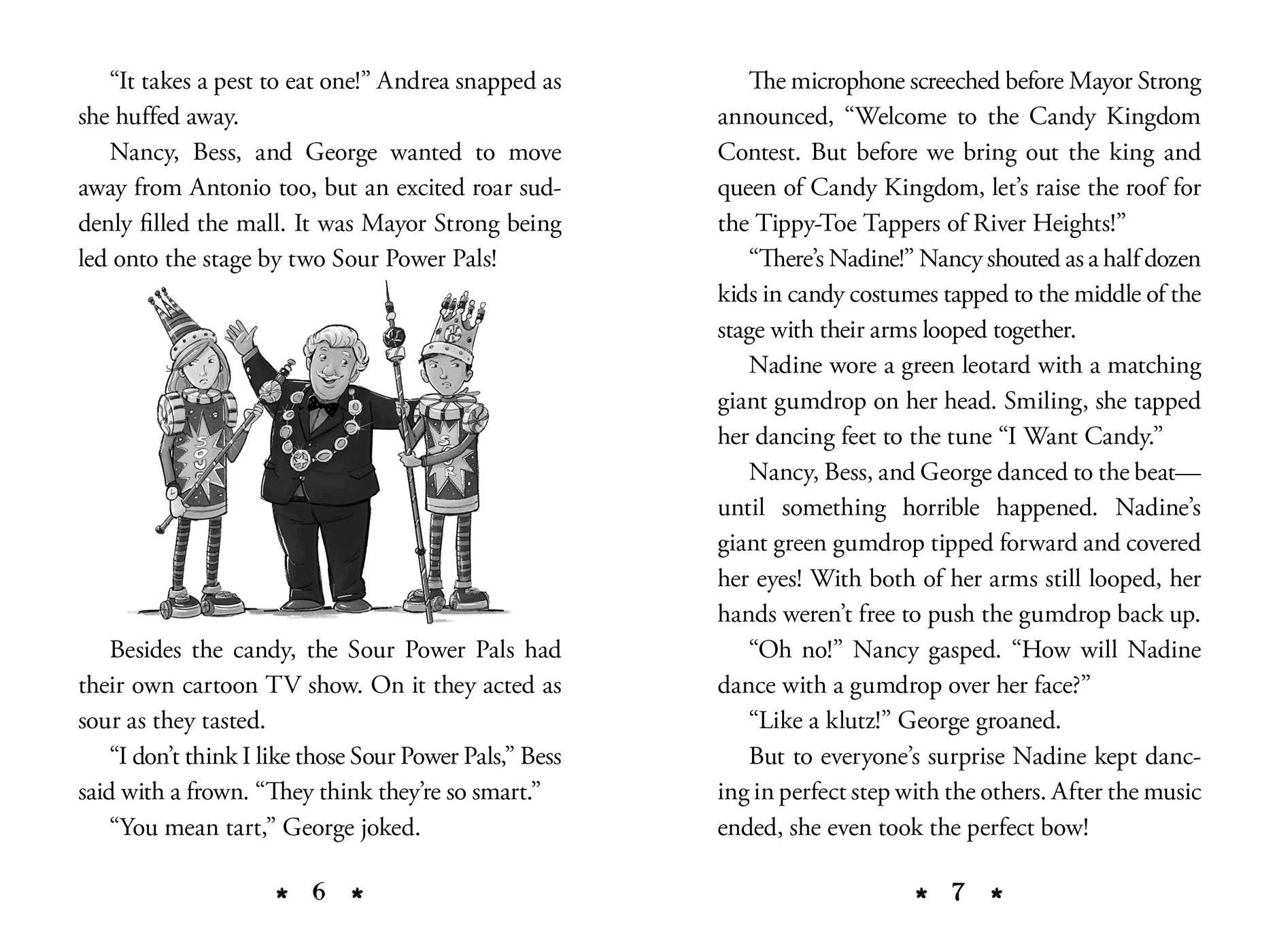 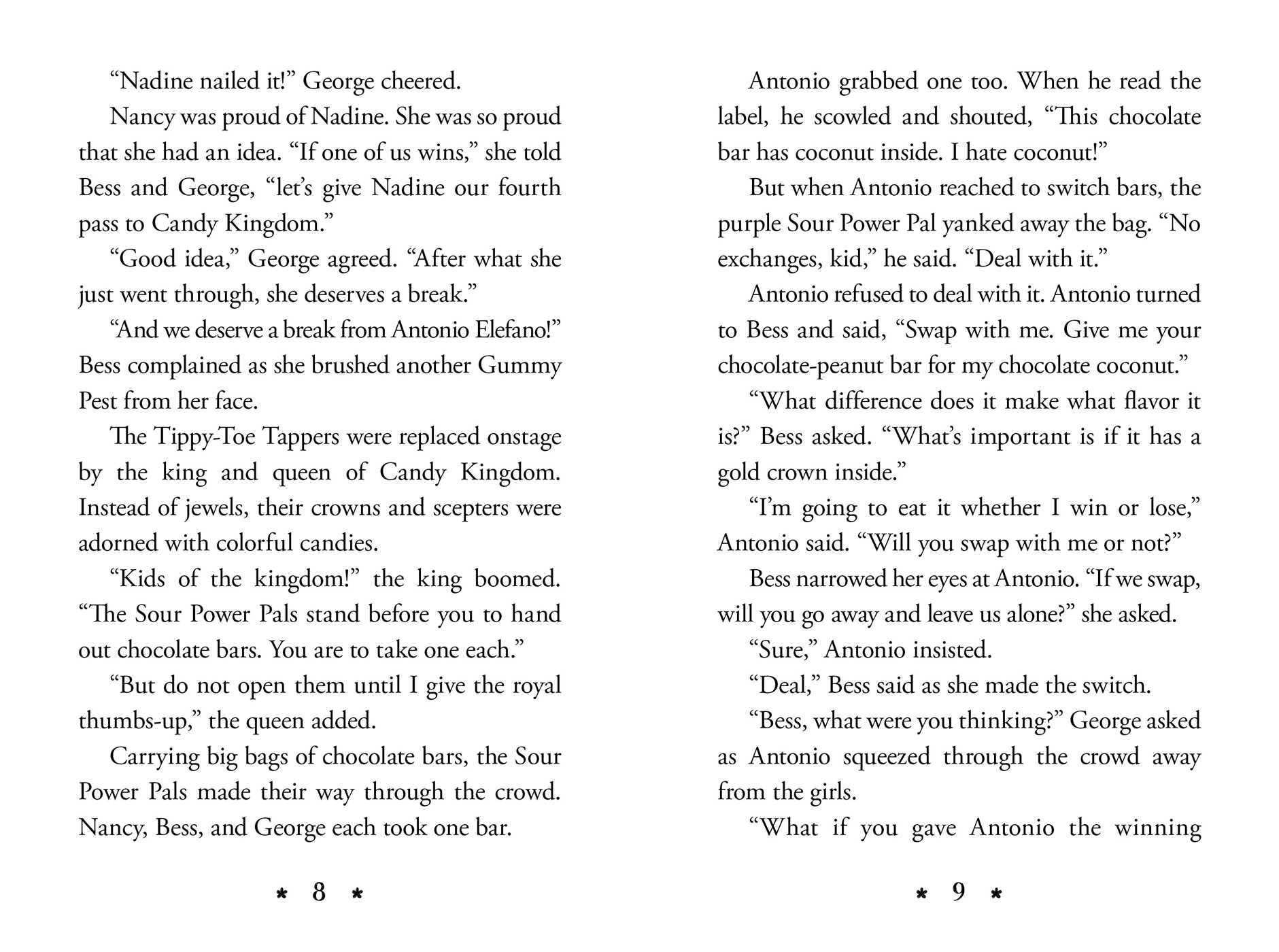 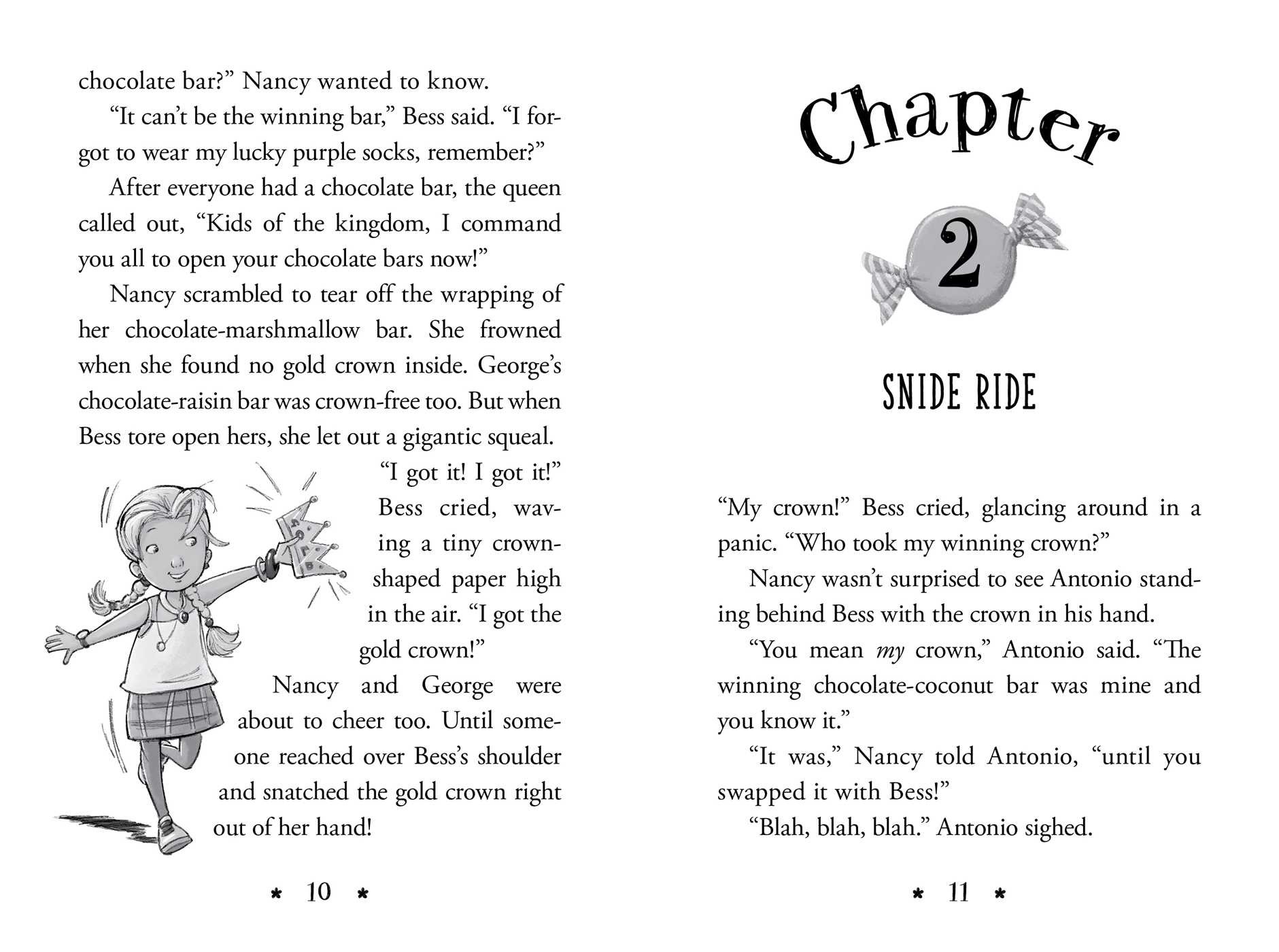 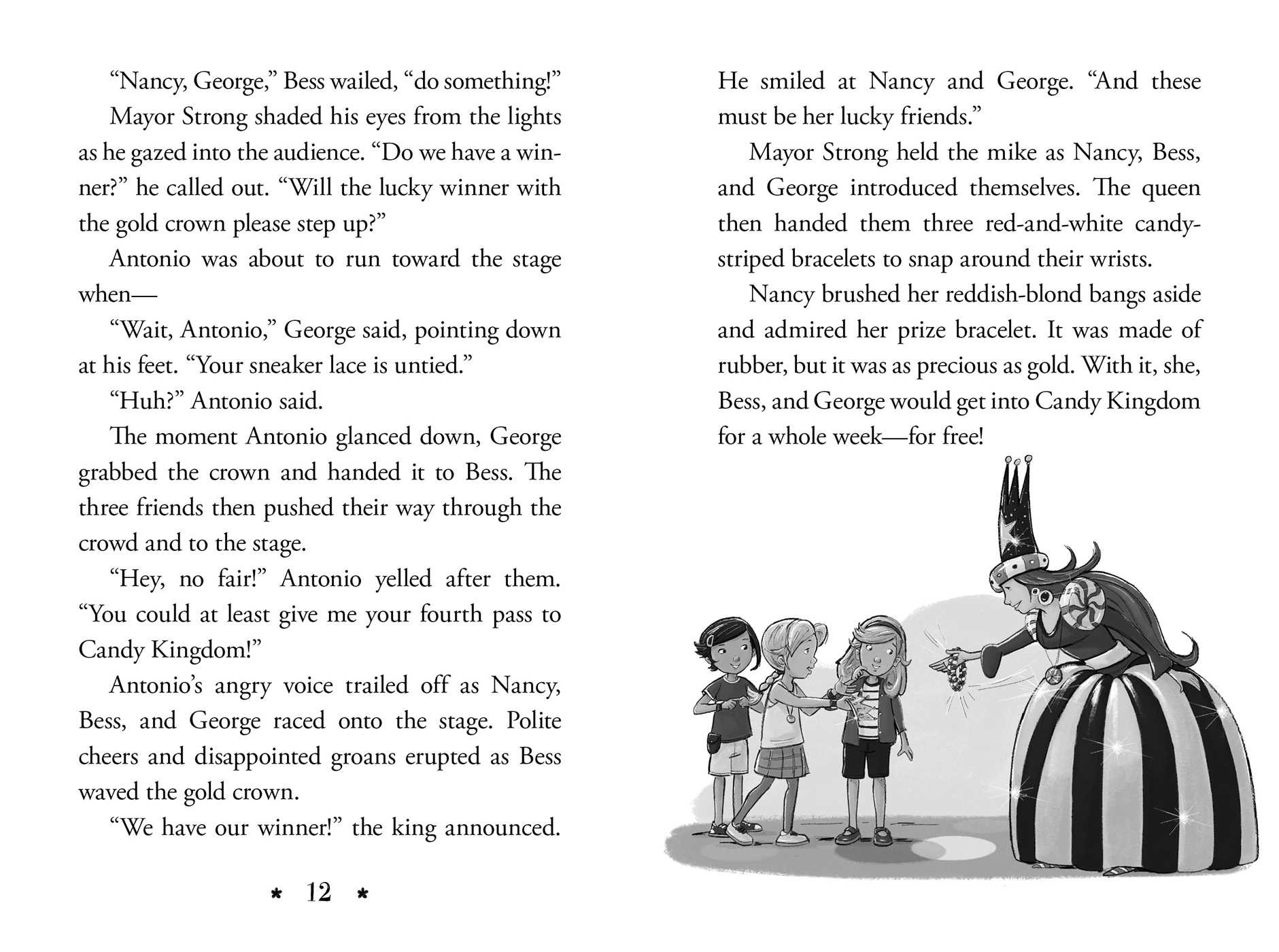 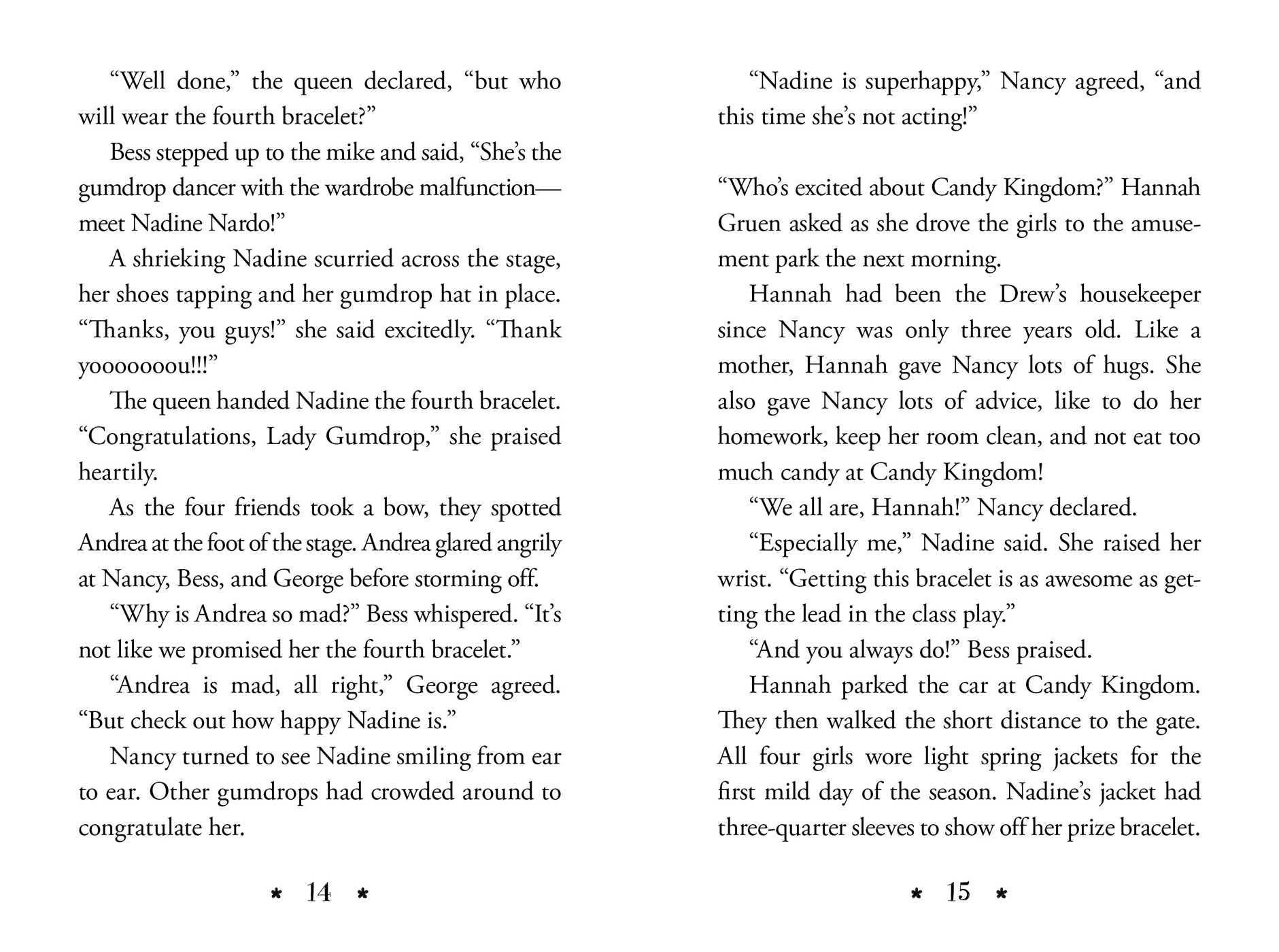 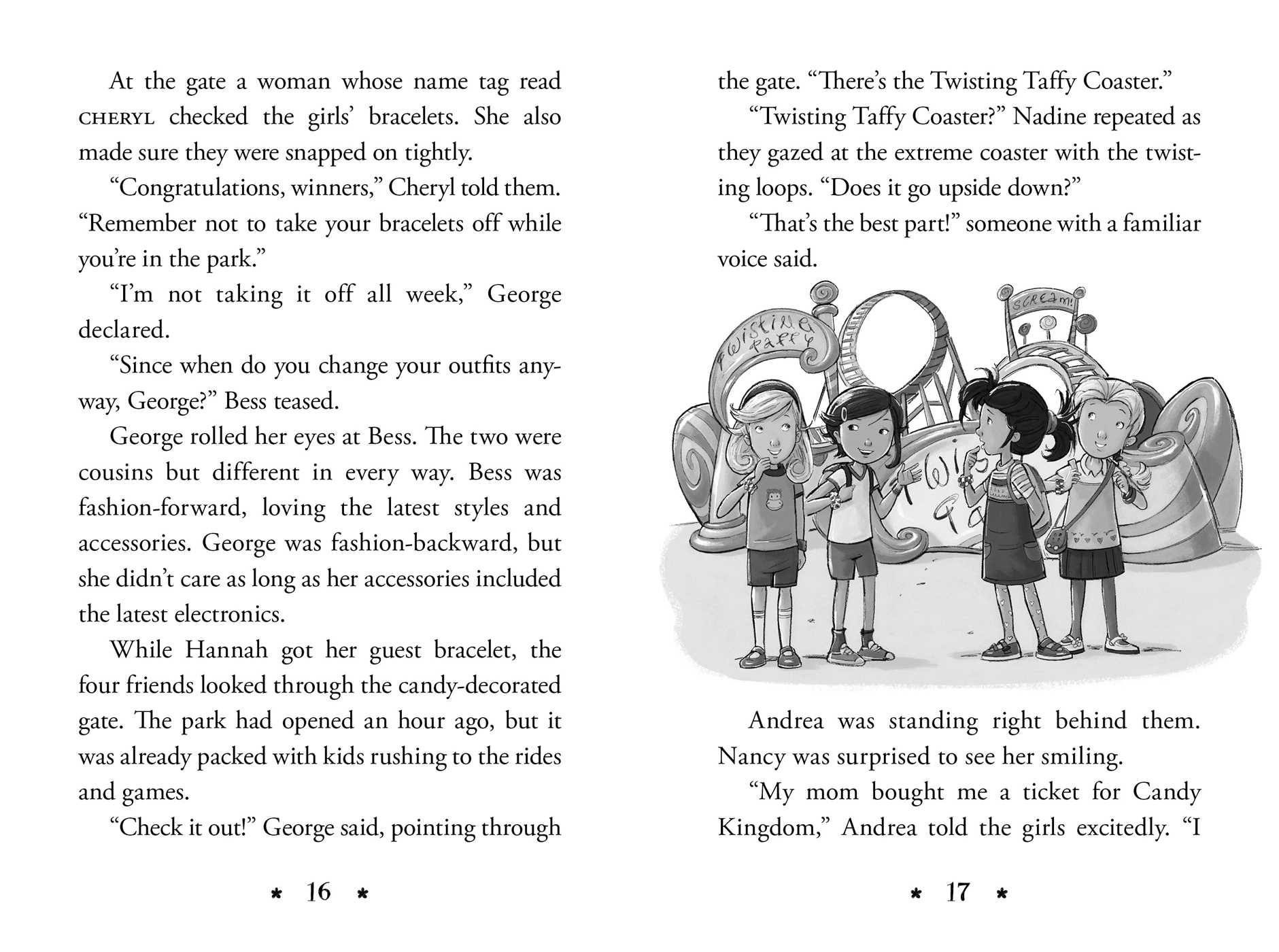 Help Nancy and her friends solve a sweet mystery at the new Candy Kingdom amusement park in the seventh book in the interactive Nancy Drew Clue Book mystery series.

The new Candy Kingdom theme park is opening in River Heights and Nancy, Bess, and George can’t wait! The park is supposed to have candy-themed rides, attractions, arcade games, and more, so when Bess wins four free passes to the park, she invites Nancy, George and their good friend, Nadine Nardo to check it out.

But Nadine’s wristband goes missing after the first ride! Nancy and her friends know that all of the wristbands were tied securely, so it couldn’t have just fallen off. Can Nancy, Bess, and George track down the stolen wristband before their sweet day at Candy Kingdom turns sour?

George Fayne’s dark curls bounced as she nodded her head. “You mean Candy Kingdom here we come,” she pointed out. “If we’re lucky.”

“I won’t be lucky.” Bess Marvin sighed. “I forgot to wear my lucky purple socks.”

Nancy thought they were all lucky to be at the mall that Friday afternoon. It was the last day of school before spring break. It seemed like every kid in River Heights was there for the Candy Kingdom contest.

Candy Kingdom was a new amusement park opening in River Heights the next day. It would have candy-style rides and candy games—even candy characters, like the superfamous Sour Power Pals!

“Remind me what the rules of the contest are,” Bess said, twirling a lock of her blond hair. “Not that I’ll win.”

“Anyone can win, Bess,” Nancy said with an assuring smile. “All you have to do is pick the chocolate bar with the gold crown inside.”

“If you do,” George went on, “you win four passes to Candy Kingdom to use every day during spring break.”

“And that means riding the Twisting Taffy Coaster every single day,” Nancy reminded them. “I heard that it flips upside down!”

“The coaster or our stomachs?” George joked.

The girls turned their faces toward the stage set up in the atrium that day.

“I heard there’s going to be a dance show before the chocolate-bar contest,” Nancy said. “Nadine told me she’s one of the dancers.”

As the mall filled up with more kids, Nancy felt someone tap her shoulder. Turning, she saw Andrea Wu, another classmate. If Nadine was the class actress, Andrea was the class candy lover—and proud of it.

Andrea said hi back. She then looked from Nancy to Bess to George and said, “If one of you wins, will you take the other two to Candy Kingdom?”

“Even when we’re not solving mysteries,” Bess added.

Everyone at River Heights Elementary School knew that Nancy, Bess, and George were the Clue Crew, detectives who solved mysteries at school and all over town. Nancy was proud of all the mysteries they had solved so far. She was also proud of her Clue Book where she wrote down all their suspects, clues, and thoughts.

“So that leaves one more Candy Kingdom pass for another friend,” Andrea said with a grin. “Like me! And you know how much I love candy. See my earrings made out of real jelly beans?” Andrea tugged her earlobes.

“Pretty!” Nancy told Andrea. “But we really haven’t figured out who we’d take yet.”

“Take me!” Andrea stated. “I invited you to my birthday party at the Sugar Sweet Spa a few weeks ago. Remember the candy-scented manicures? And the hot-cocoa foot soaks?”

“How could I forget?” George groaned. “I’ve been digging marshmallows out from between my toes ever since.”

Nancy was about to ask Andrea who she would take to Candy Kingdom if she won, until—

Someone had dangled a wiggly spider in front of Andrea’s face. When Nancy, Bess, and George heard a familiar snicker, they knew who it was.

“Antonio Elefano!” Bess snapped angrily as their grinning classmate stepped out from behind Andrea.

“It’s just one of my Gummy Pests candies.” Antonio laughed as he bit a squiggly, wiggly leg off the spider. “My favorite candy.”

“It takes a pest to eat one!” Andrea snapped as she huffed away.

Nancy, Bess, and George wanted to move away from Antonio too, but an excited roar suddenly filled the mall. It was Mayor Strong being led onto the stage by two Sour Power Pals!

Besides the candy, the Sour Power Pals had their own cartoon TV show. On it they acted as sour as they tasted.

“I don’t think I like those Sour Power Pals,” Bess said with a frown. “They think they’re so smart.”

The microphone screeched before Mayor Strong announced, “Welcome to the Candy Kingdom Contest. But before we bring out the king and queen of Candy Kingdom, let’s raise the roof for the Tippy-Toe Tappers of River Heights!”

“There’s Nadine!” Nancy shouted as a half dozen kids in candy costumes tapped to the middle of the stage with their arms looped together.

Nadine wore a green leotard with a matching giant gumdrop on her head. Smiling, she tapped her dancing feet to the tune “I Want Candy.”

Nancy, Bess, and George danced to the beat—until something horrible happened. Nadine’s giant green gumdrop tipped forward and covered her eyes! With both of her arms still looped, her hands weren’t free to push the gumdrop back up.

“Oh no!” Nancy gasped. “How will Nadine dance with a gumdrop over her face?”

But to everyone’s surprise Nadine kept dancing in perfect step with the others. After the music ended, she even took the perfect bow!

Nancy was proud of Nadine. She was so proud that she had an idea. “If one of us wins,” she told Bess and George, “let’s give Nadine our fourth pass to Candy Kingdom.”

“Good idea,” George agreed. “After what she just went through, she deserves a break.”

“And we deserve a break from Antonio Elefano!” Bess complained as she brushed another Gummy Pest from her face.

The Tippy-Toe Tappers were replaced onstage by the king and queen of Candy Kingdom. Instead of jewels, their crowns and scepters were adorned with colorful candies.

“Kids of the kingdom!” the king boomed. “The Sour Power Pals stand before you to hand out chocolate bars. You are to take one each.”

“But do not open them until I give the royal thumbs-up,” the queen added.

Carrying big bags of chocolate bars, the Sour Power Pals made their way through the crowd. Nancy, Bess, and George each took one bar.

Antonio grabbed one too. When he read the label, he scowled and shouted, “This chocolate bar has coconut inside. I hate coconut!”

But when Antonio reached to switch bars, the purple Sour Power Pal yanked away the bag. “No exchanges, kid,” he said. “Deal with it.”

Antonio refused to deal with it. Antonio turned to Bess and said, “Swap with me. Give me your chocolate-peanut bar for my chocolate coconut.”

“What difference does it make what flavor it is?” Bess asked. “What’s important is if it has a gold crown inside.”

“I’m going to eat it whether I win or lose,” Antonio said. “Will you swap with me or not?”

Bess narrowed her eyes at Antonio. “If we swap, will you go away and leave us alone?” she asked.

“Deal,” Bess said as she made the switch.

“Bess, what were you thinking?” George asked as Antonio squeezed through the crowd away from the girls.

“What if you gave Antonio the winning chocolate bar?” Nancy wanted to know.

“It can’t be the winning bar,” Bess said. “I forgot to wear my lucky purple socks, remember?”

After everyone had a chocolate bar, the queen called out, “Kids of the kingdom, I command you all to open your chocolate bars now!”

Nancy scrambled to tear off the wrapping of her chocolate-marshmallow bar. She frowned when she found no gold crown inside. George’s chocolate-raisin bar was crown-free too. But when Bess tore open hers, she let out a gigantic squeal.

“I got it! I got it!” Bess cried, waving a tiny crown-shaped paper high in the air. “I got the gold crown!”

Nancy and George were about to cheer too. Until someone reached over Bess’s shoulder and snatched the gold crown right out of her hand!
Carolyn Keene