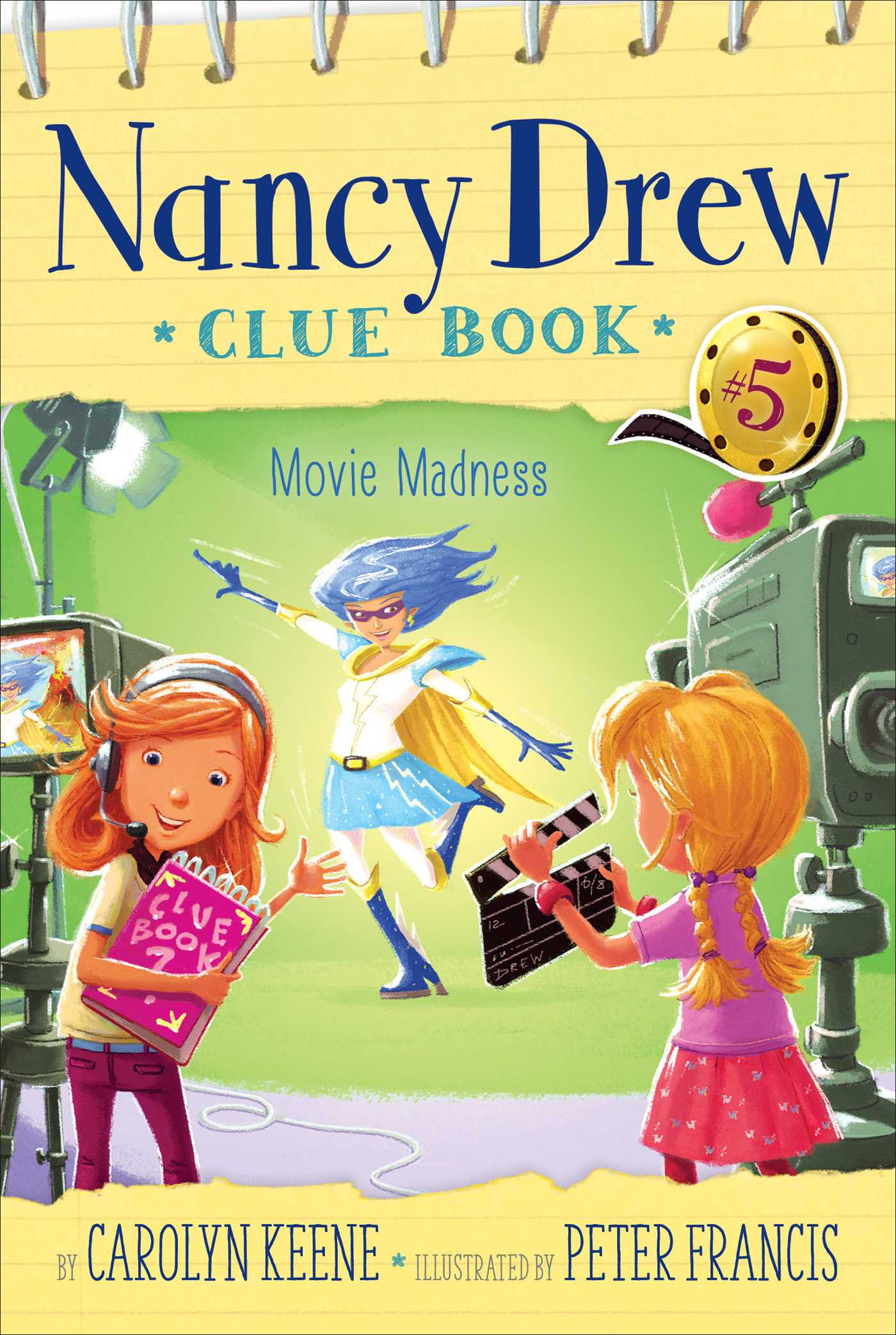 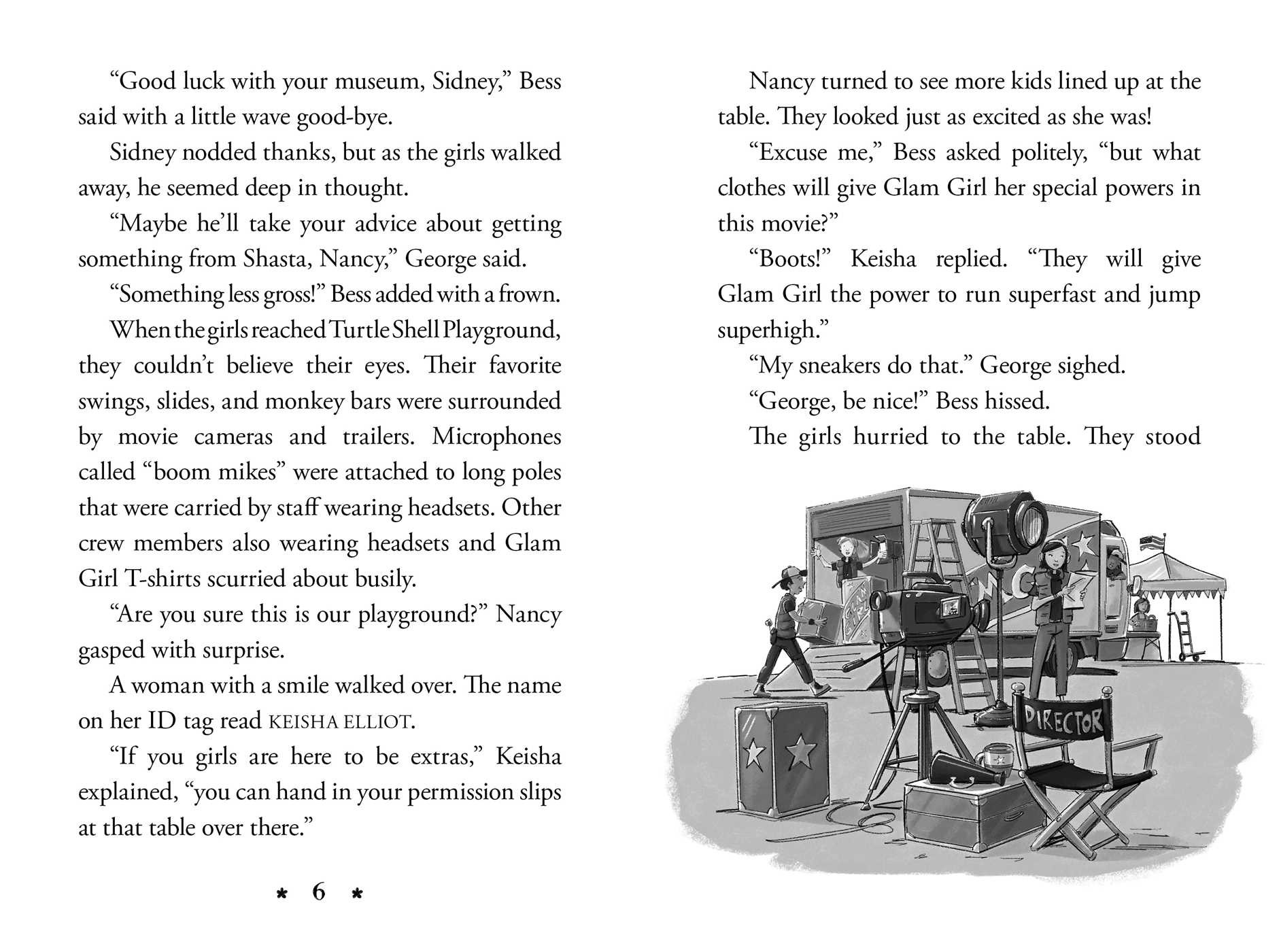 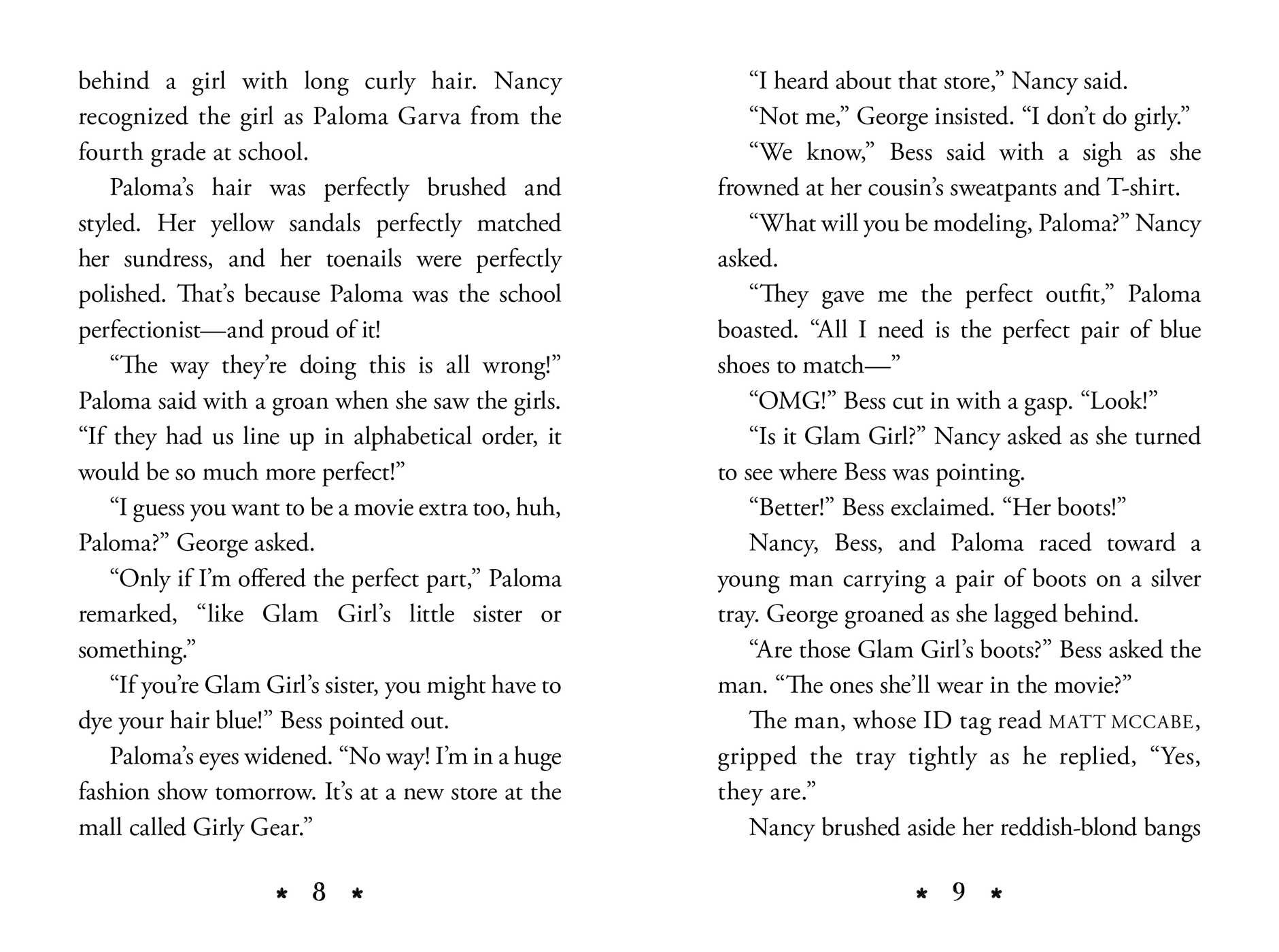 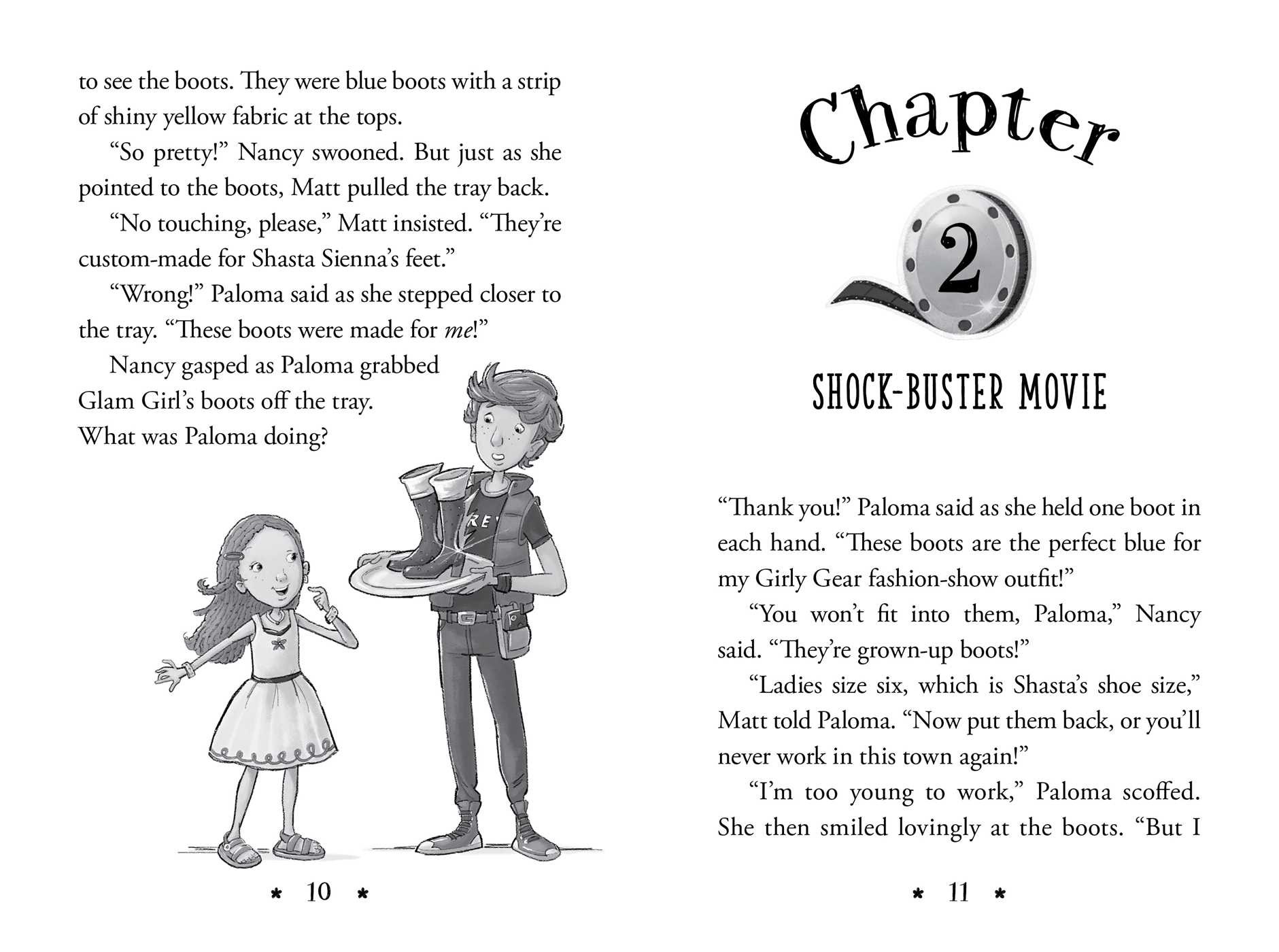 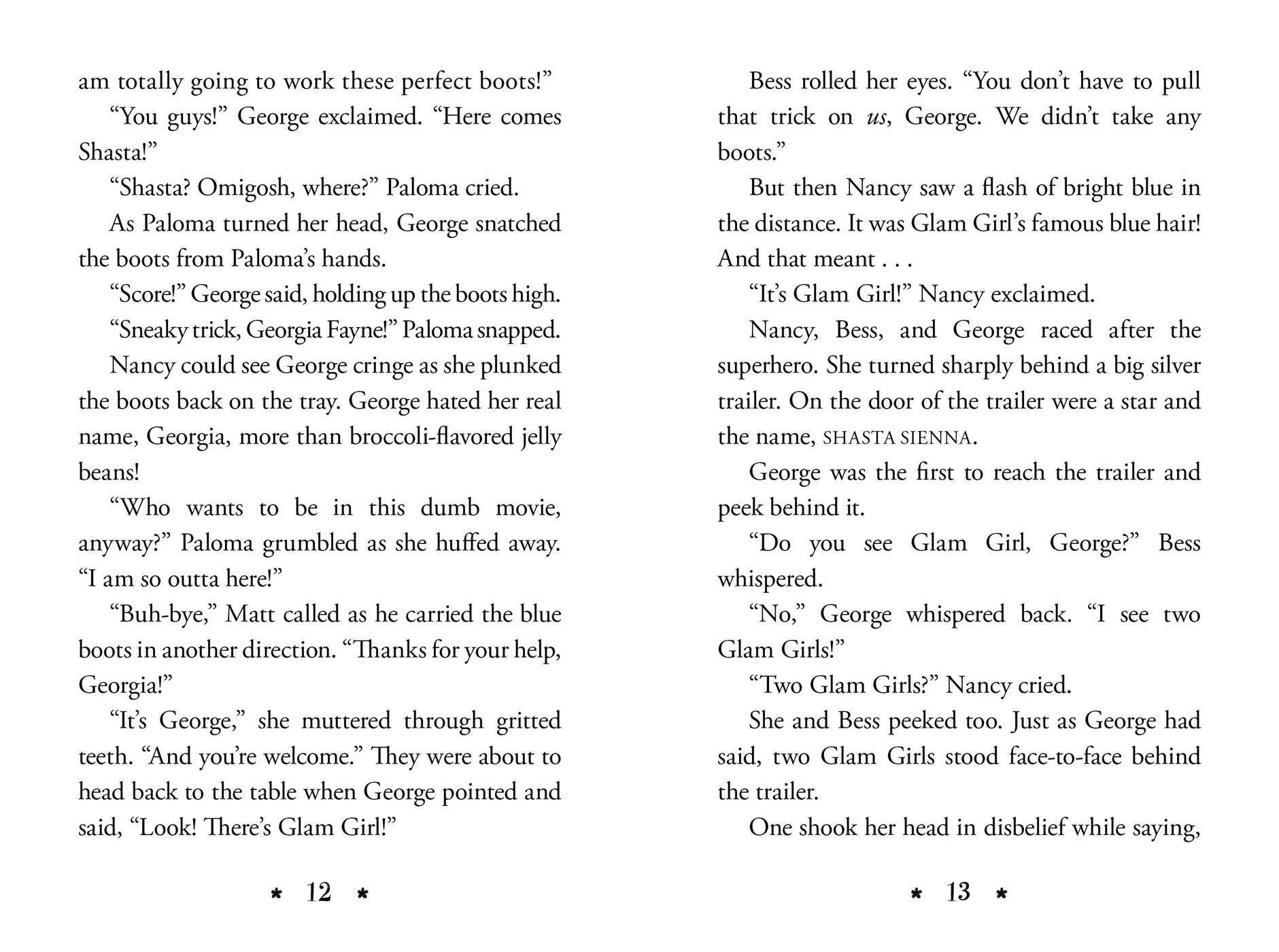 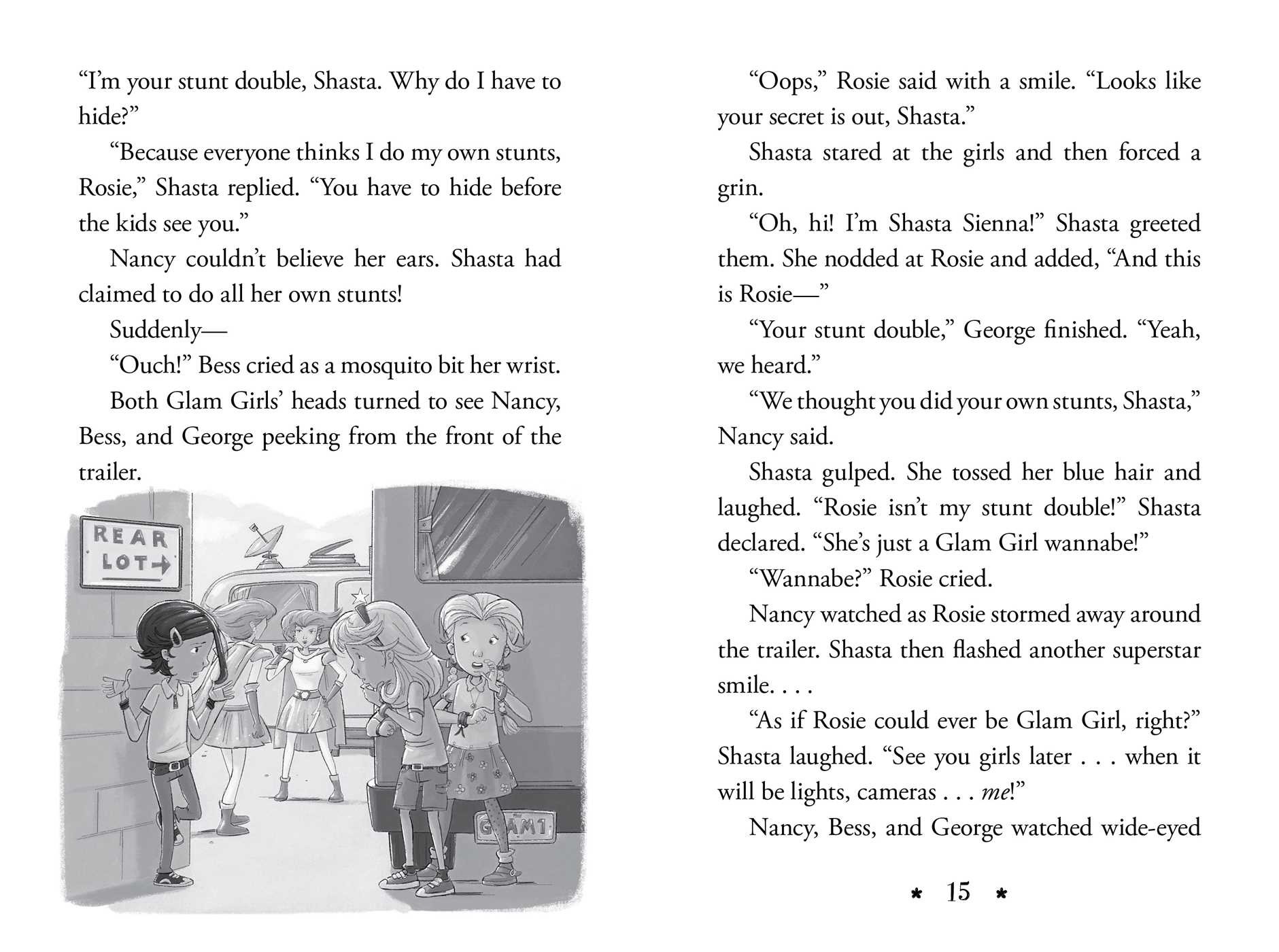 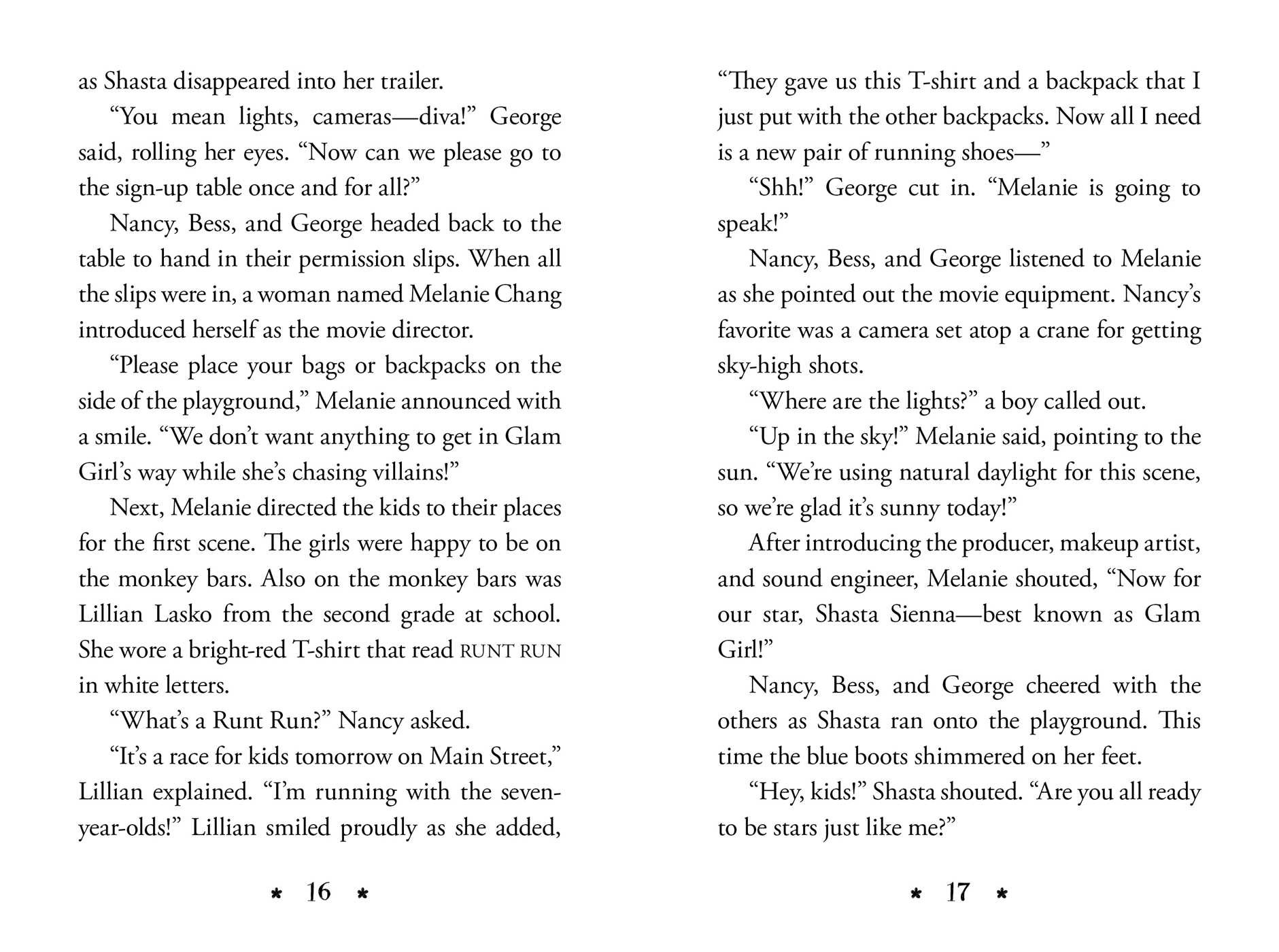 Help Nancy and her friends find a prop that’s gone missing from a superhero movie set in the fifth book in an interactive Nancy Drew chapter book mystery series. Grab a piece of paper and get ready to jot down your own ideas and solutions to the case!

School is out for summer and the timing is great because a movie is filming in River Heights, and Nancy, Bess, and George—along with a bunch of their classmates—get to be extras in a scene shot at the playground!

The movie features Glam Girl, a fashion-forward superhero who gets her powers through her clothes. When the girls arrive on set, they catch a glimpse of the super shoes that give Glam Girl the ability to run, jump, and kick with super-speed. An assistant explains to them that there is only one pair in existence and that they were custom-made for the actress Shasta’s feet.

Everyone goes wild as Glam Girl runs into the playground, blue shoes glimmering. But when Shasta’s on a between-scenes break, the shoes go missing! The director says that if the shoes aren’t found, they’ll be leaving River Heights and their scene won’t make it into the movie! Good thing Nancy happens to have her most important prop right in her pocket—her clue book.

Who took the blue super shoes? Was it Paloma Garva, who needs a pair of blue shoes for her Junior Fashion Show? Was it Rosie the stunt-woman, who seems to envy Shasta’s spotlight? Or was it the Popcorn Peeps, their classmates’ film club, who need movie relics for their new museum?

PICTURE PERFECT
“How lucky are we to be living in Hollywood, you guys?” eight-year-old Bess Marvin asked excitedly.

Nancy Drew and George Fayne stopped walking to stare at Bess. Did she just say . . . Hollywood?

“Bess, we don’t live in Hollywood,” Nancy insisted. “We live in River Heights.”

“I know!” Bess agreed with a toss of her long blond hair. “But a movie is about to be filmed right here. That makes River Heights practically Hollywood, right?”

“I guess!” Nancy said with a smile.

All three best friends had reason to smile: Summer vacation had just begun. Even better, a scene in the next Glam Girl action-adventure movie would be filmed right in their own neighborhood at Turtle Shell Playground!

“I still can’t believe they’re using kids from the neighborhood as movie extras!” Nancy said as they headed for the playground.

“Being in a movie will be cool,” George admitted. “I just don’t get why Glam Girl is so special.”

“Are you serious, George?” Bess gasped. “Glam Girl is the only fashion-forward superhero who gets her powers from clothes!”

“A pair of sunglasses gives Glam Girl X-ray vision!” Nancy explained. “A hat lets her read minds, and gloves give her power to point and freeze any villain in his or her tracks!”

“Sure, if you’re a Smurf!” George snorted.

“Here’s something awesome,” Nancy added. “Shasta Sienna, the actress who plays Glam Girl, says she does all her own stunts—like jumping out of planes and off of speeding trains!”

“Stunts are cool,” Bess said, “but I’m more interested in the clothes Glam Girl will wear in this movie.”

“Computers, clothes—are you sure you’re cousins?” Nancy asked Bess and George. “You’re as different as—”

Bess was a serious fashionista with a room full of clothes and accessories. The only fashion accessory George dreamed of was a smartwatch!

“Speaking of movies,” George said. “Look at who’s up the block.”

Nancy glanced ahead to see their classmate Sidney Schacter standing on his toes and taping a flier to a tree. Sidney was a major movie fanboy. He had even started his own movie-loving club called “Popcorn Peeps.”

“Hi, Sidney,” Nancy said as they walked over. “Are you going to be an extra in the Glam Girl movie today?”

Sidney pointed proudly to the flier and said, “The Popcorn Peeps’ first awesome movie museum in the basement of my house!”

“What’s in it so far?” Nancy wanted to know.

“Only the most excellent movie memorabilia,” Sidney said. “We’ve got a wad of gum that was chewed and spit out by a top-secret superstar celeb, an autographed pizza-parlor napkin with another star’s lipstick stain—”

“And gross grease stains, too, I’m sure,” Bess cut in.

“Gross to some . . . awesome to others,” Sidney said. “Come to our museum on opening day and see for yourselves.”

Bess shook her head. “If you want kids to visit your museum, Sidney, you need better stuff than a wad of gum and a greasy napkin.”

“Maybe you can get something from Shasta Sienna on the Glam Girl set today,” Nancy suggested.

“Har-har,” Sidney said, pretending to laugh. “What do you know about movies, anyway? Aren’t you detectives?”

“The best!” Bess declared. “We have our own detective club called the Clue Crew.”

“I know that,” Sidney said.

“Nancy even has a Clue Book where she writes down all our clues and suspects,” George went on. “Right, Nancy?”

“Right, but today these detectives are going to be movie stars,” Nancy said. “So we’d better get going.”

“Good luck with your museum, Sidney,” Bess said with a little wave good-bye.

Sidney nodded thanks, but as the girls walked away, he seemed deep in thought.

“Maybe he’ll take your advice about getting something from Shasta, Nancy,” George said.

“Something less gross!” Bess added with a frown.

When the girls reached Turtle Shell Playground, they couldn’t believe their eyes. Their favorite swings, slides, and monkey bars were surrounded by movie cameras and trailers. Microphones called “boom mikes” were attached to long poles that were carried by staff wearing headsets. Other crew members also wearing headsets and Glam Girl T-shirts scurried about busily.

“Are you sure this is our playground?” Nancy gasped with surprise.

A woman with a smile walked over. The name on her ID tag read KEISHA ELLIOT.

“If you girls are here to be extras,” Keisha explained, “you can hand in your permission slips at that table over there.”

Nancy turned to see more kids lined up at the table. They looked just as excited as she was!

“Excuse me,” Bess asked politely, “but what clothes will give Glam Girl her special powers in this movie?”

“Boots!” Keisha replied. “They will give Glam Girl the power to run superfast and jump superhigh.”

“My sneakers do that.” George sighed.

The girls hurried to the table. They stood behind a girl with long curly hair. Nancy recognized the girl as Paloma Garva from the fourth grade at school.

Paloma’s hair was perfectly brushed and styled. Her yellow sandals perfectly matched her sundress, and her toenails were perfectly polished. That’s because Paloma was the school perfectionist—and proud of it!

“The way they’re doing this is all wrong!” Paloma said with a groan when she saw the girls. “If they had us line up in alphabetical order, it would be so much more perfect!”

“I guess you want to be a movie extra too, huh, Paloma?” George asked.

“Only if I’m offered the perfect part,” Paloma remarked, “like Glam Girl’s little sister or something.”

“If you’re Glam Girl’s sister, you might have to dye your hair blue!” Bess pointed out.

Paloma’s eyes widened. “No way! I’m in a huge fashion show tomorrow. It’s at a new store at the mall called Girly Gear.”

“I heard about that store,” Nancy said.

“We know,” Bess said with a sigh as she frowned at her cousin’s sweatpants and T-shirt.

“What will you be modeling, Paloma?” Nancy asked.

“They gave me the perfect outfit,” Paloma boasted. “All I need is the perfect pair of blue shoes to match—”

“Is it Glam Girl?” Nancy asked as she turned to see where Bess was pointing.

Nancy, Bess, and Paloma raced toward a young man carrying a pair of boots on a silver tray. George groaned as she lagged behind.

“Are those Glam Girl’s boots?” Bess asked the man. “The ones she’ll wear in the movie?”

The man, whose ID tag read MATT MCCABE, gripped the tray tightly as he replied, “Yes, they are.”

Nancy brushed aside her reddish-blond bangs to see the boots. They were blue boots with a strip of shiny yellow fabric at the tops.

“So pretty!” Nancy swooned. But just as she pointed to the boots, Matt pulled the tray back.

“Wrong!” Paloma said as she stepped closer to the tray. “These boots were made for me!”

Nancy gasped as Paloma grabbed Glam Girl’s boots off the tray. What was Paloma doing?