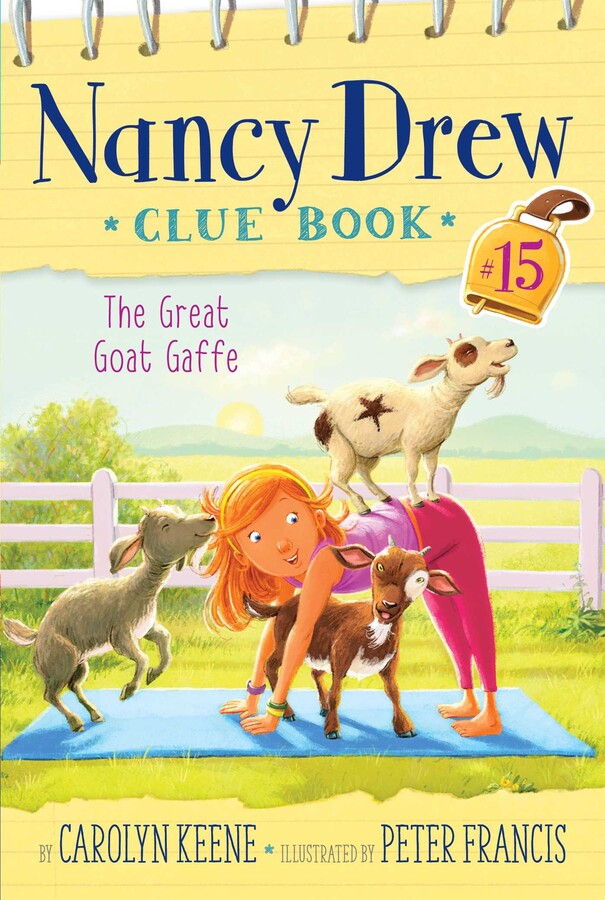 Nancy and her friends are on the case when a goat yoga class goes baaaad in the fifteenth book in the interactive Nancy Drew Clue Book mystery series.

Nancy is excited for Kids with Kids at Sweet Creams Farm. She and her friends are going to learn yoga surrounded by adorable baby goats. They might even be on TV, since Good Morning River Heights is coming to do a story on the new class.

Peaceful meditation turns into mayhem when one of the goats goes wild, bouncing around and chewing on everything. Nancy recognizes the crazy kid—YouView star Pogo the Trampoline Goat. But why is he there? Did someone slip him into the pen to sabotage the class?

Can the Clue Crew find out the truth and restore Sweet Creams Farm’s reputation?

Chapter 1: Meet and Bleat Chapter 1 MEET AND BLEAT
“What could be better than spring break?” George Fayne asked.

It was a sunny Tuesday in early spring. Nancy, Bess, and George were often busy solving mysteries as the Clue Crew. This day, they were busy volunteering at Sweet Creams Farm.

To the girls, Sweet Creams was the best farm ever. Not only did it sell goat cheese, yogurt, and ice cream, but it had its own petting zoo filled with tiny Pygmy goats!

“Hey, you guys!” George chuckled as three goats tried to drink out of the bottle she clutched. “One per customer!”

“Feeding tiny goats is super fun,” Nancy said as they carefully placed empty bottles in a wooden crate, “but I wish we could join a real live goat yoga class.”

“Yoga is supposed to be so relaxing!” Bess added.

“What’s relaxing about twisting yourself into a pretzel while goats climb all over you?” George asked. “I’d rather play soccer.”

The three friends left the pen to make room for the goat yoga class. People chatted excitedly as they laid their mats on the soft grassy ground. Some curious goats were already wandering around the mats, bleating softly.

Nancy, Bess, and George watched through the fence as the yoga instructor, Nina Pickles, began the class. Besides teaching yoga, Nina had her own store where she sold activewear and workout clothes.

“Be one with the goats as we enter the low lunge,” Nina told the class. “And be sure to check out the low sale prices at Nina Pickles Activewear. This week only!”

Nancy, Bess, and George traded smiles. Nina was always looking for ways to spread the word about her store.

“Let’s lie on our stomachs for the cobra pose,” Nina instructed. “Cobra, as in the new snakeskin-design leggings just in at my store!”

“Baaaaa!” one of the tiny goats bleated as he scampered onto a posing man’s back.

“Pygmy goats are as small as puppies,” Bess pointed out. “It’s hard to tell which ones are the babies.”

“You mean kids,” George said. “We learned here on the farm that baby goats are called kids, remember?”

Kids! The word made Nancy’s eyes light up.

“Bess, George, the most awesome idea just popped into my head! What if Sweet Creams Farm had a goat yoga class for kids?”

“Yes,” Nancy said. “The class can be called… Kids with Kids!”

“Cool for other kids,” George said as they watched a goat crawl onto a woman’s shoulder. “Like I said, I’ll stick to soccer.”

“I bet you’ll like goat yoga too, George.” Nancy giggled. “Let’s find Sophie and see what she thinks.”

After hearing Nancy’s idea, she smiled. “A goat yoga class for kids would be great for Sweet Creams Farm,” she said. “And for Wake Up, River Heights!”

“Wake Up, River Heights?” Nancy repeated. “You mean the TV show that’s on super early in the morning?”

“Correct!” Sophie said. “A crew is coming to the farm tomorrow morning to film our goat yoga class.” Sophie gave an excited little hop. “With spring break this week, a goat yoga class just for kids would be perfect!”

The girls turned to see Nina Pickles, a towel draped over one shoulder.

“Why aren’t you with your class, Nina?” Sophie asked.

“I left them in the deep relaxation pose,” Nina explained, “but who can relax with news about a goat yoga class for kids?”

Nancy couldn’t believe her ears. “You like my idea too, Ms. Pickles?” she asked.

“Sure I do!” Nina said. “I’m unveiling my new line of kids activewear this week. What better time to introduce it than on TV?”

“Why not?” Nina asked, surprised.

Nina gasped. “Everything is about fashion, Sophie!” She closed her eyes and took deep breaths through her nose before adding, “I think you’d better find another yoga instructor for tomorrow.”

The girls watched as Nina huffed back to the goat yoga pen and her class.

“She’ll get over it, I’m sure,” Sophie said. “In the meantime, I have an important job for you girls.”

“No, Bess.” Sophie chuckled. “I need you to find kids for our goat yoga class tomorrow. They need to be here at seven thirty sharp.”

“No problem, Sophie,” Nancy said quickly. “We have lots of friends and classmates to invite.”

“Getting them to be on TV will be easy,” George added.

“Good! I’ll get some permission slips to give to your friends,” Sophie said. “Tell them to bring their slip signed by a parent tomorrow.”

Sophie went to her office for the permission slips.

The girls couldn’t wait to find kids for the goat yoga class!

“I am soooo excited!” Bess said. Then, “What are we going to wear to the goat yoga class?”

Nancy smiled and said, “As soon as we get the permission slips, let’s go to Main Street. We’ll find lots of kids there.”

Nancy, Bess, and George all had the same rules. They could walk anywhere, as long as it was under five blocks—and as long as they were together. Together was more fun anyway.

When the girls reached Main Street, they found lots of kids they knew. But most of the kids knew nothing about yoga….

“I like frozen yoga,” Peter Patino said, pointing to the nearby fro-yo shop. “Will they have chocolate or strawberry?”

Some kids had heard about yoga, but not goat yoga. When the girls invited Kendra Jackson, she asked, “Are the goats gentle?”

George nodded. “You won’t know there’s a goat on your back,” she explained, “until you smell the hay on its breath!”

When the girls asked Henderson Murphy, he shook his head. “I watch Danger Dog at that time every morning,” he said. “Tomorrow is the flea circus episode.”

“You’d rather watch TV than be on TV?” George groaned. “Whatever!”

The girls left Henderson and walked up Main Street. When they ran out of kids to invite, they turned onto Magnolia Street.

“What if everybody wants to watch Danger Dog tomorrow morning?” George asked, imagining the worst. “What if no one shows up?”

Nancy wasn’t too worried. “Some kids said yes, some said no, and a few said maybe,” she stated. “Let’s hope for the best.”

Nancy, Bess, and George froze. Had they just heard what they thought they’d heard?

“For sure,” George said, looking around. “After being at the farm all day, I know a goat when I hear one.”

“Except we’re not on the farm,” Bess said. “We’re on Magnolia Street.”

The girls followed the sound to the middle of the block. George pointed to a green house with white shutters. “It’s coming from the Dishers’ house,” she said.

Eight-year-old Leslie Disher was in the girls’ class at school. Leslie loved writing in her journal. She also worshipped teen singing idol Brad Sylvester. Nancy, Bess, and George didn’t know Leslie’s twin brother, Wesley, as well. He was in the other third-grade class.

The bleating grew louder as Nancy, Bess, and George followed it to the backyard. A big trampoline was set up there. But it wasn’t Leslie or Wesley jumping up and down on it. It was a tiny white-and-brown Pygmy goat!

“Baaaa! Baaaa!” the goat bleated as it bounced sky-high. The girls couldn’t believe their eyes as they watched the goat perform awesome front flips and backflips and midair spins!

“Not just any goat, Nancy!” George said with a grin. “That’s Pogo!”