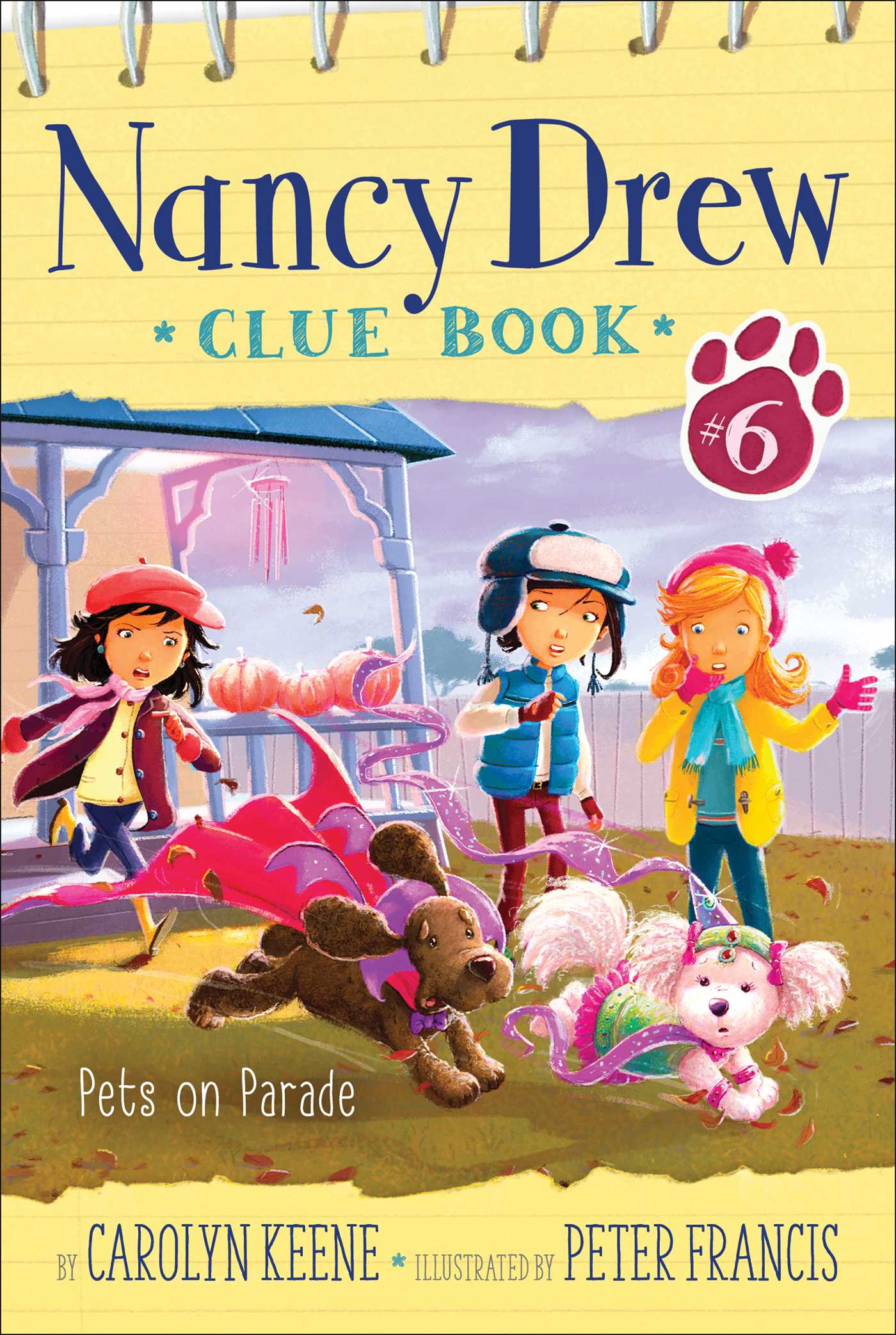 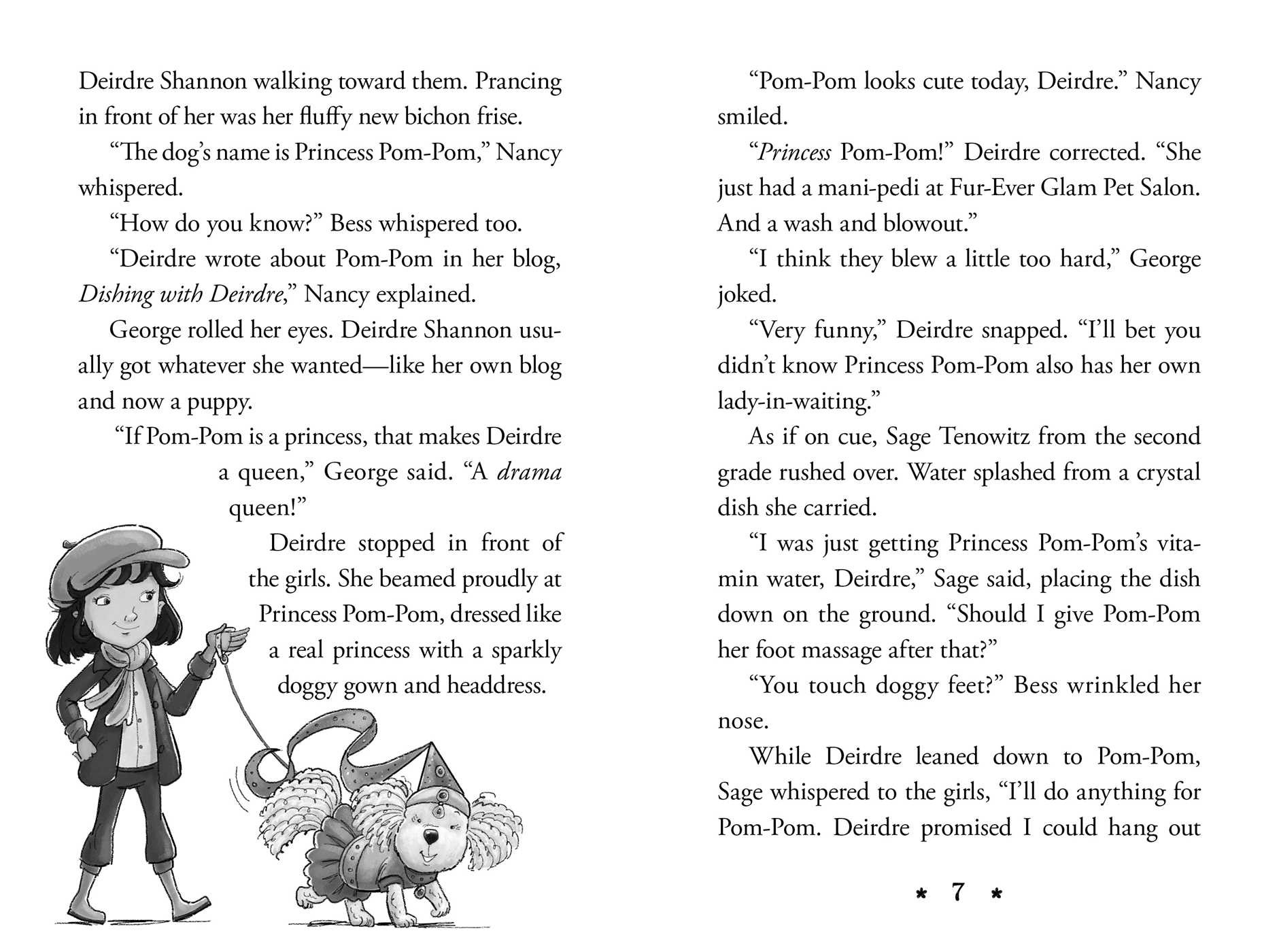 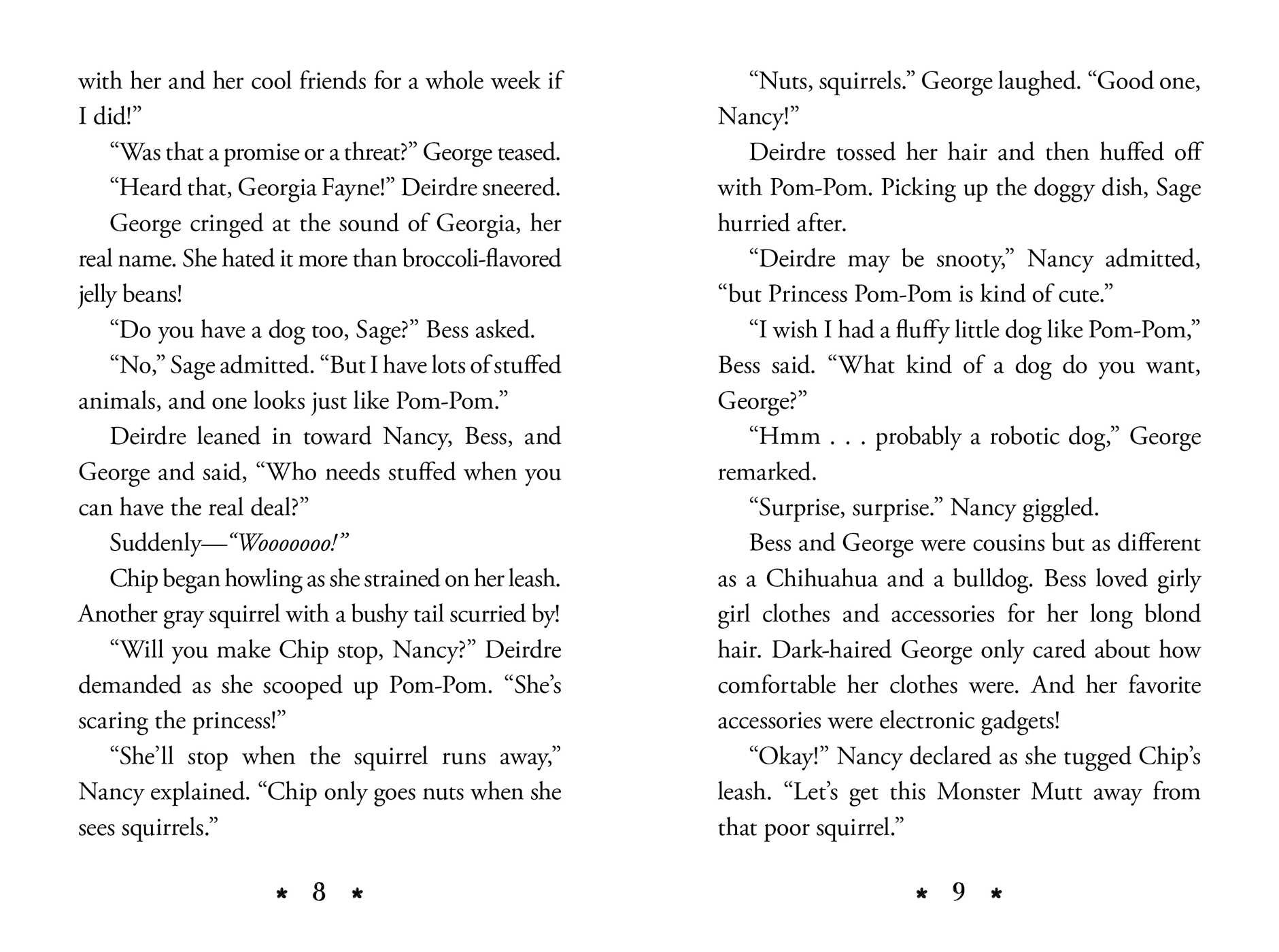 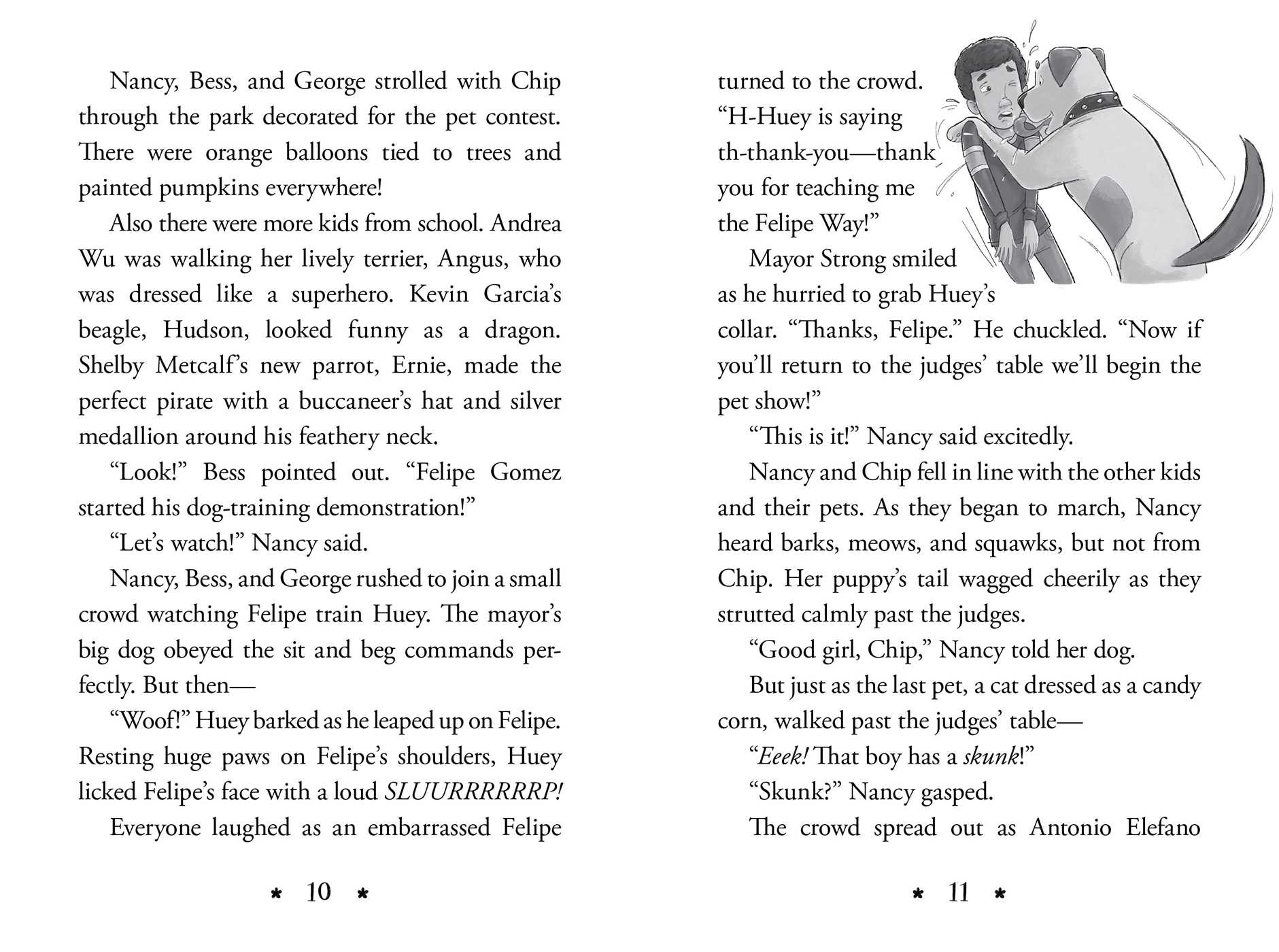 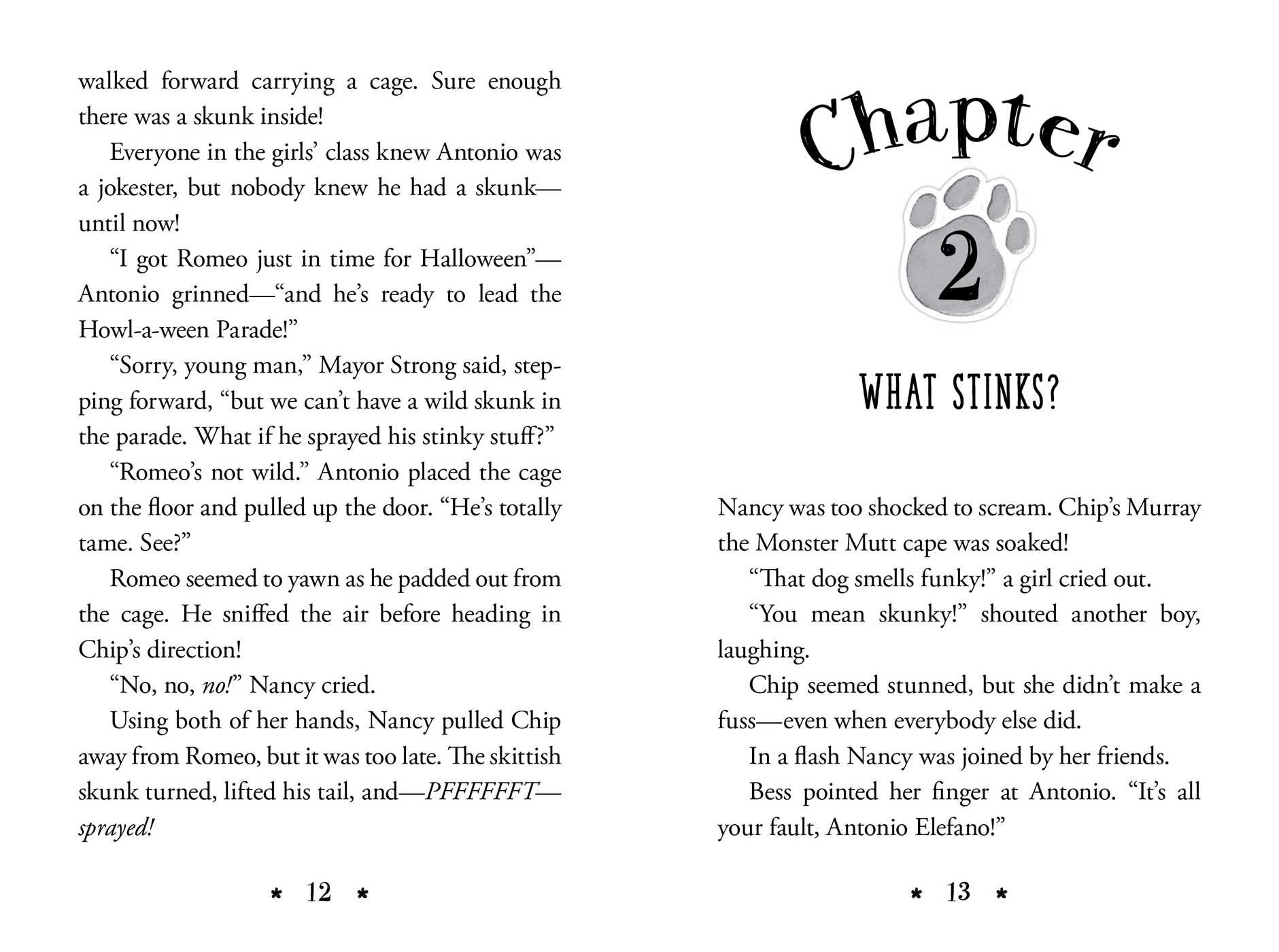 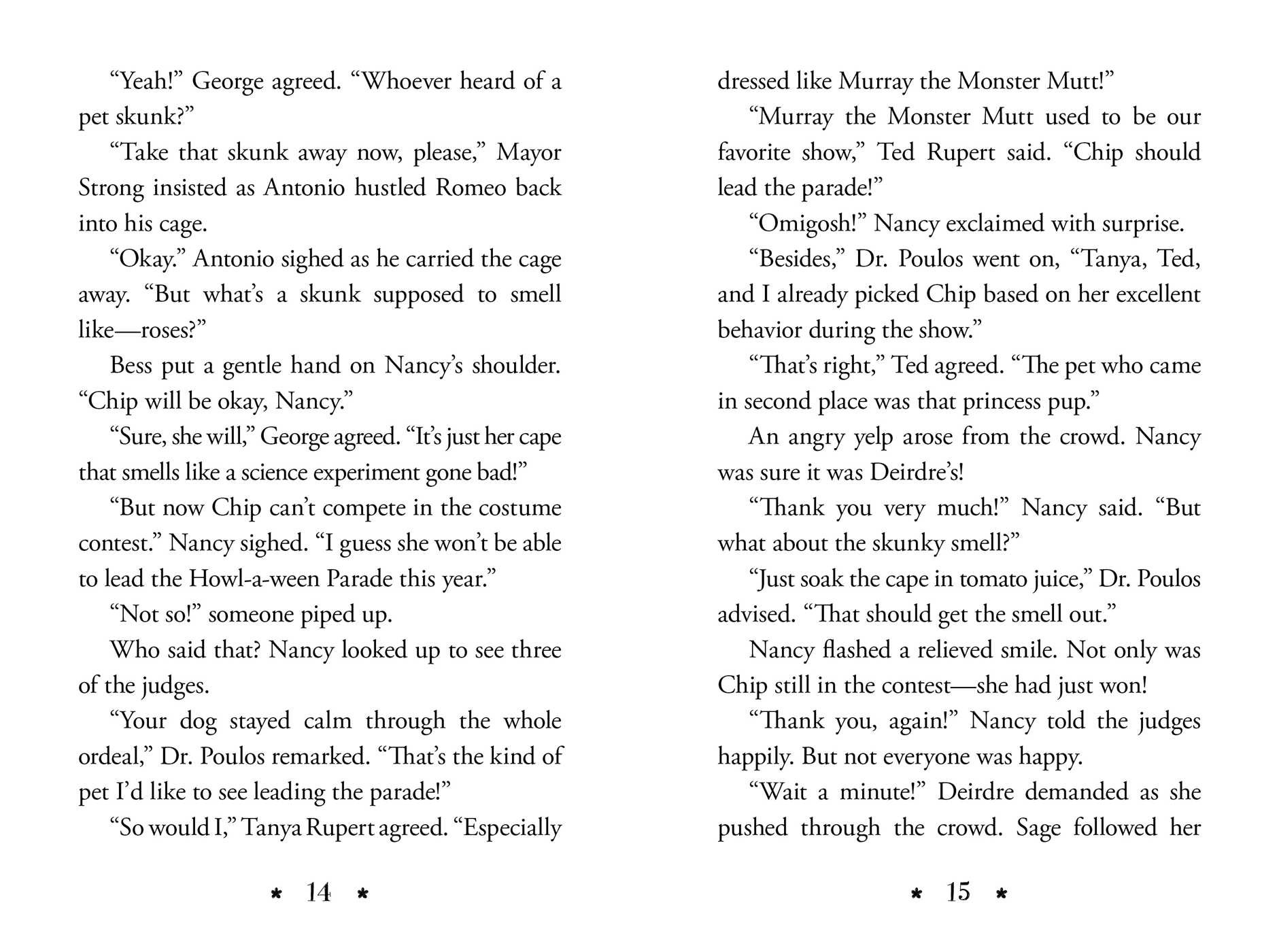 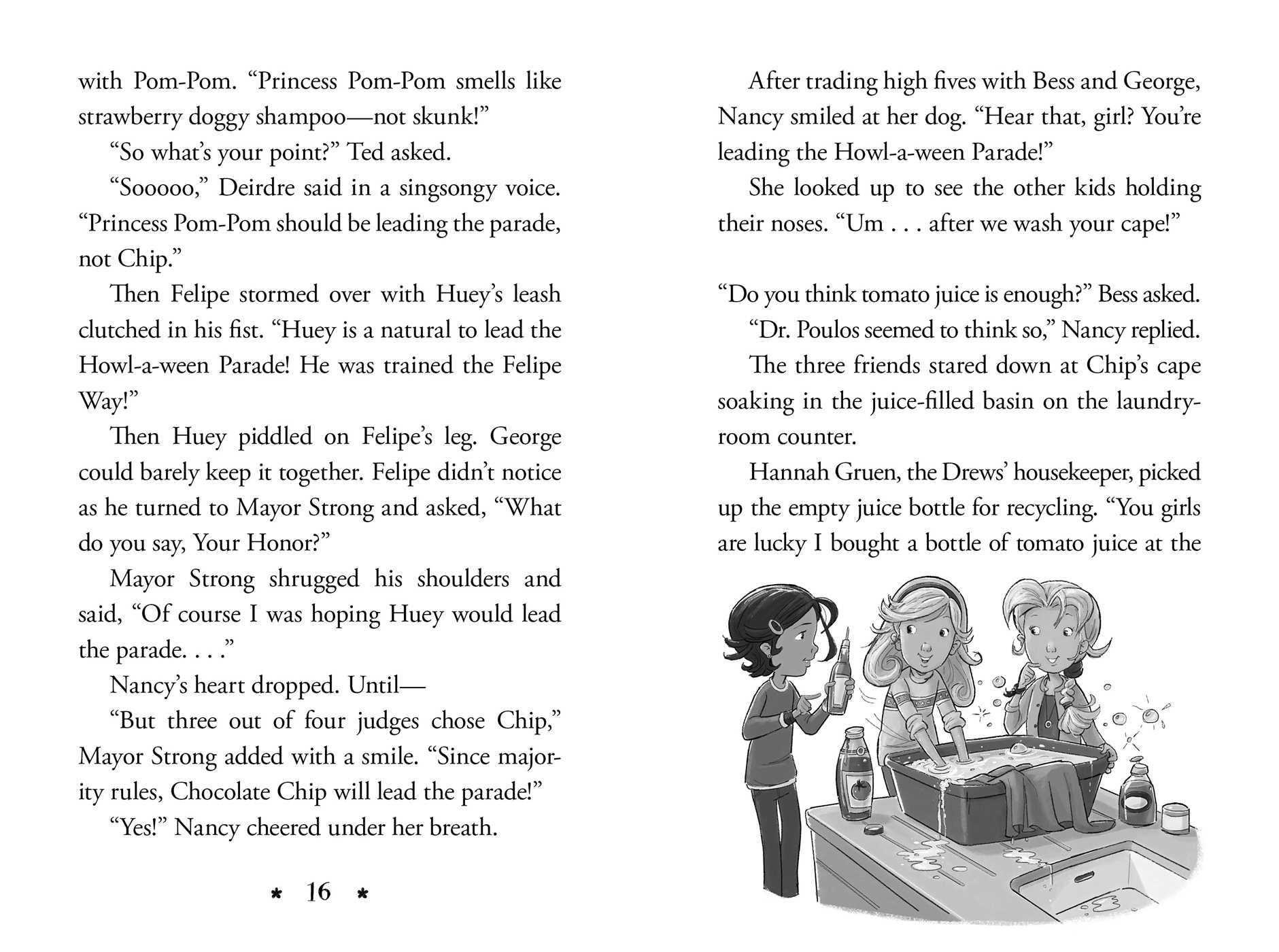 Nancy, Bess, and George solve a doggone puzzler of a mystery during the annual River Heights Halloween Pet Parade in the sixth book in an all-new, interactive Nancy Drew chapter book mystery series.

Nancy, Bess, and George are gearing up for a weekend of River Heights Halloween activities, including the annual Howl-A-Ween Pet Parade! All the kids get to dress up their pets and march with them up Main Street. Nancy’s dog, Chocolate Chip, is even picked to lead the parade atop a festive hay wagon float!

But right before show time, Chip starts whining, running in circles, and burrowing into the hay! When Nancy can’t calm her down, the parade officials remove her as the leader!

Nancy, Bess, and George wonder if something—or someone—made Chip act that way. Nancy pulls out her clue book; the Clue Crew is on the case! Who’s behind Chip’s strange doggy behavior? Is it Deidre Shannon, who was mad that Chip was chosen over her princess puppy Pom-Pom to lead the parade? Felipe the Pet Trainer, who wanted a dog he was training to lead the parade? Or is it—yikes!—the ghost of Murray the Monster Mutt? Will the Clue Crew crack this case before all the River Heights pets go batty?

CHIP, CHIP, HOORAY!
“I don’t get it, Nancy,” eight-year-old George Fayne admitted. “If Chocolate Chip is dressed up as a vampire, then where are her fangs?”

Nancy Drew, also eight, couldn’t answer. She was too busy trying to keep her puppy from chasing a squirrel in the park!

“Chip howls like a vampire too.” Nancy giggled as the squirrel ran away. “But only when she sees a squirrel!”

It was Friday afternoon and a few days before Halloween. Thanks to Mayor Strong the Halloween fun had already begun in River Heights, starting with a Howl-a-ween Pet Parade on Saturday.

“Neat!” Bess said as the friends gazed around the park. “It’s like all the pets in River Heights are here.”

“But only one pet will get to lead the Howl-a-ween Parade,” Nancy reminded her. “Hopefully the judges will like Chip in the pet show today and pick her!”

The judges were already seated at a picnic table. Instead of a picnic basket, lemonade, and potato salad, the table was covered with papers and pens.

“I know all the judges’ names!” Bess said. “They’re Ted and Tanya Rupert, the owners of the Fur-Ever Glam Pet Salon; Dr. Emily Poulos, a veterinarian; and Felipe Gomez!”

Almost anyone with a dog knew Felipe and his web series The Peaceful Pet. Felipe trained dogs the Felipe Way. That day he would demonstrate his method on a River Heights dog—Mayor Strong’s big drooling dog, Huey!

“The judges look like they’re getting ready for the pet show soon,” George pointed out. “Do you think Chip is ready, Nancy?”

Nancy nodded. She knew Chip would behave as the pets marched single-file past the judges’ table. But good behavior wasn’t the only thing the judges would look for.

“I hope Felipe and the other judges like Chip’s vampire costume best,” Nancy said. “It once belonged to Murray the Monster Mutt!”

Nancy pointed to the three M’s stitched to the back of the cape. “Murray the Monster Mutt had his own TV show before we were born. My dad found Murray’s cape at a vintage clothes store on Main Street!”

“I heard about that show from my mom and dad,” George said. “But where’s Murray now?”

“I don’t have a clue,” Nancy admitted. “I just know that Murray lived right here in River Heights—”

Nancy turned to see Quincy Taylor from the girls’ third grade class. Perched on Quincy’s shoulder was his ferret, Slinky, dressed as a clown.

“What do you mean? What’s a ghost-dog?” Nancy asked.

“Dogs don’t live as long as humans do,” Quincy explained. “So Murray has got to be a ghost by now.”

“Not if Murray really is a vampire dog,” George informed. “Then he’d live forever!”

Quincy pointed to Chip’s cape. “Aren’t you scared that Murray’s cape will turn your dog into a Monster Mutt too?”

“And we’re detectives,” Bess pointed out proudly. “So if there were ghosts around, we’d have found them by now!”

Nancy nodded in agreement. She, Bess, and George loved solving mysteries more than anything. So much that they started their own detective club called the Clue Crew. Nancy even had a Clue Book where she wrote down every suspect and clue!

“Whatever.” Quincy sighed as he handed a small white card to Nancy. “But if your dog acts weird give us a call.”

As Quincy walked away the girls checked out his card.

“Speaking of scary,” George said in a low voice. “Look who else is here.”

Nancy looked up from Quincy’s card to see Deirdre Shannon walking toward them. Prancing in front of her was her fluffy new bichon frise.

“How do you know?” Bess whispered too.

“Deirdre wrote about Pom-Pom in her blog, Dishing with Deirdre,” Nancy explained.

George rolled her eyes. Deirdre Shannon usually got whatever she wanted—like her own blog and now a puppy.

“If Pom-Pom is a princess, that makes Deirdre a queen,” George said. “A drama queen!”

Deirdre stopped in front of the girls. She beamed proudly at Princess Pom-Pom, dressed like a real princess with a sparkly doggy gown and headdress.

“Princess Pom-Pom!” Deirdre corrected. “She just had a mani-pedi at Fur-Ever Glam Pet Salon. And a wash and blowout.”

“I think they blew a little too hard,” George joked.

As if on cue, Sage Tenowitz from the second grade rushed over. Water splashed from a crystal dish she carried.

“I was just getting Princess Pom-Pom’s vitamin water, Deirdre,” Sage said, placing the dish down on the ground. “Should I give Pom-Pom her foot massage after that?”

While Deirdre leaned down to Pom-Pom, Sage whispered to the girls, “I’ll do anything for Pom-Pom. Deirdre promised I could hang out with her and her cool friends for a whole week if I did!”

“Was that a promise or a threat?” George teased.

George cringed at the sound of Georgia, her real name. She hated it more than broccoli-flavored jelly beans!

“No,” Sage admitted. “But I have lots of stuffed animals, and one looks just like Pom-Pom.”

Deirdre leaned in toward Nancy, Bess, and George and said, “Who needs stuffed when you can have the real deal?”

Chip began howling as she strained on her leash. Another gray squirrel with a bushy tail scurried by!

“Will you make Chip stop, Nancy?” Deirdre demanded as she scooped up Pom-Pom. “She’s scaring the princess!”

“She’ll stop when the squirrel runs away,” Nancy explained. “Chip only goes nuts when she sees squirrels.”

Deirdre tossed her hair and then huffed off with Pom-Pom. Picking up the doggy dish, Sage hurried after.

“Deirdre may be snooty,” Nancy admitted, “but Princess Pom-Pom is kind of cute.”

“I wish I had a fluffy little dog like Pom-Pom,” Bess said. “What kind of a dog do you want, George?”

Bess and George were cousins but as different as a Chihuahua and a bulldog. Bess loved girly girl clothes and accessories for her long blond hair. Dark-haired George only cared about how comfortable her clothes were. And her favorite accessories were electronic gadgets!

“Okay!” Nancy declared as she tugged Chip’s leash. “Let’s get this Monster Mutt away from that poor squirrel.”

Nancy, Bess, and George strolled with Chip through the park decorated for the pet contest. There were orange balloons tied to trees and painted pumpkins everywhere!

Also there were more kids from school. Andrea Wu was walking her lively terrier, Angus, who was dressed like a superhero. Kevin Garcia’s beagle, Hudson, looked funny as a dragon. Shelby Metcalf’s new parrot, Ernie, made the perfect pirate with a buccaneer’s hat and silver medallion around his feathery neck.

“Woof!” Huey barked as he leaped up on Felipe. Resting huge paws on Felipe’s shoulders, Huey licked Felipe’s face with a loud SLUURRRRRRP!

Everyone laughed as an embarrassed Felipe turned to the crowd. “H-Huey is saying th-thank-you—thank you for teaching me the Felipe Way!”

Mayor Strong smiled as he hurried to grab Huey’s collar. “Thanks, Felipe.” He chuckled. “Now if you’ll return to the judges’ table we’ll begin the pet show!”

“This is it!” Nancy said excitedly.

Nancy and Chip fell in line with the other kids and their pets. As they began to march, Nancy heard barks, meows, and squawks, but not from Chip. Her puppy’s tail wagged cheerily as they strutted calmly past the judges.

But just as the last pet, a cat dressed as a candy corn, walked past the judges’ table—

The crowd spread out as Antonio Elefano walked forward carrying a cage. Sure enough there was a skunk inside!

Everyone in the girls’ class knew Antonio was a jokester, but nobody knew he had a skunk—until now!

“I got Romeo just in time for Halloween”—Antonio grinned—“and he’s ready to lead the Howl-a-ween Parade!”

“Sorry, young man,” Mayor Strong said, stepping forward, “but we can’t have a wild skunk in the parade. What if he sprayed his stinky stuff?”

“Romeo’s not wild.” Antonio placed the cage on the floor and pulled up the door. “He’s totally tame. See?”

Romeo seemed to yawn as he padded out from the cage. He sniffed the air before heading in Chip’s direction!

Using both of her hands, Nancy pulled Chip away from Romeo, but it was too late. The skittish skunk turned, lifted his tail, and—PFFFFFFT—sprayed!
Carolyn Keene