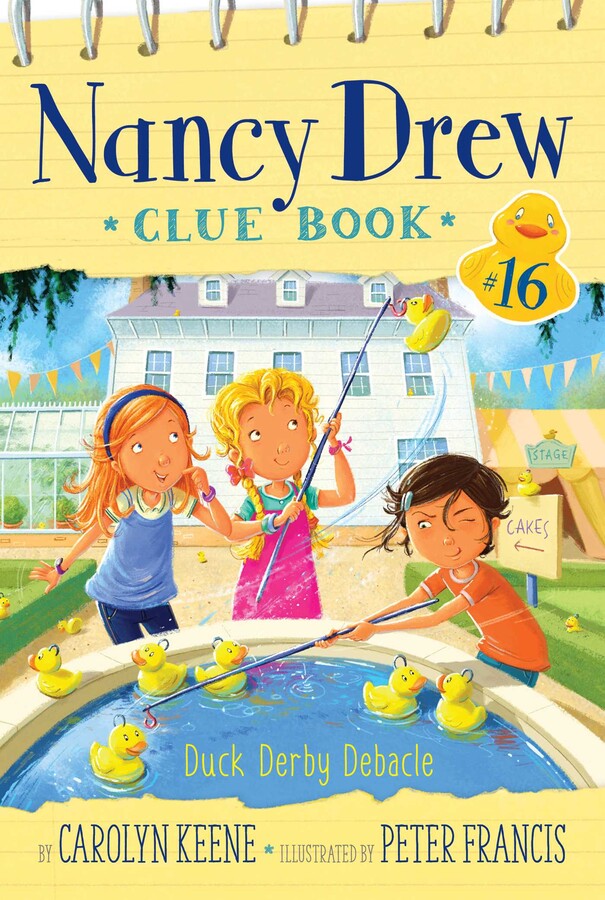 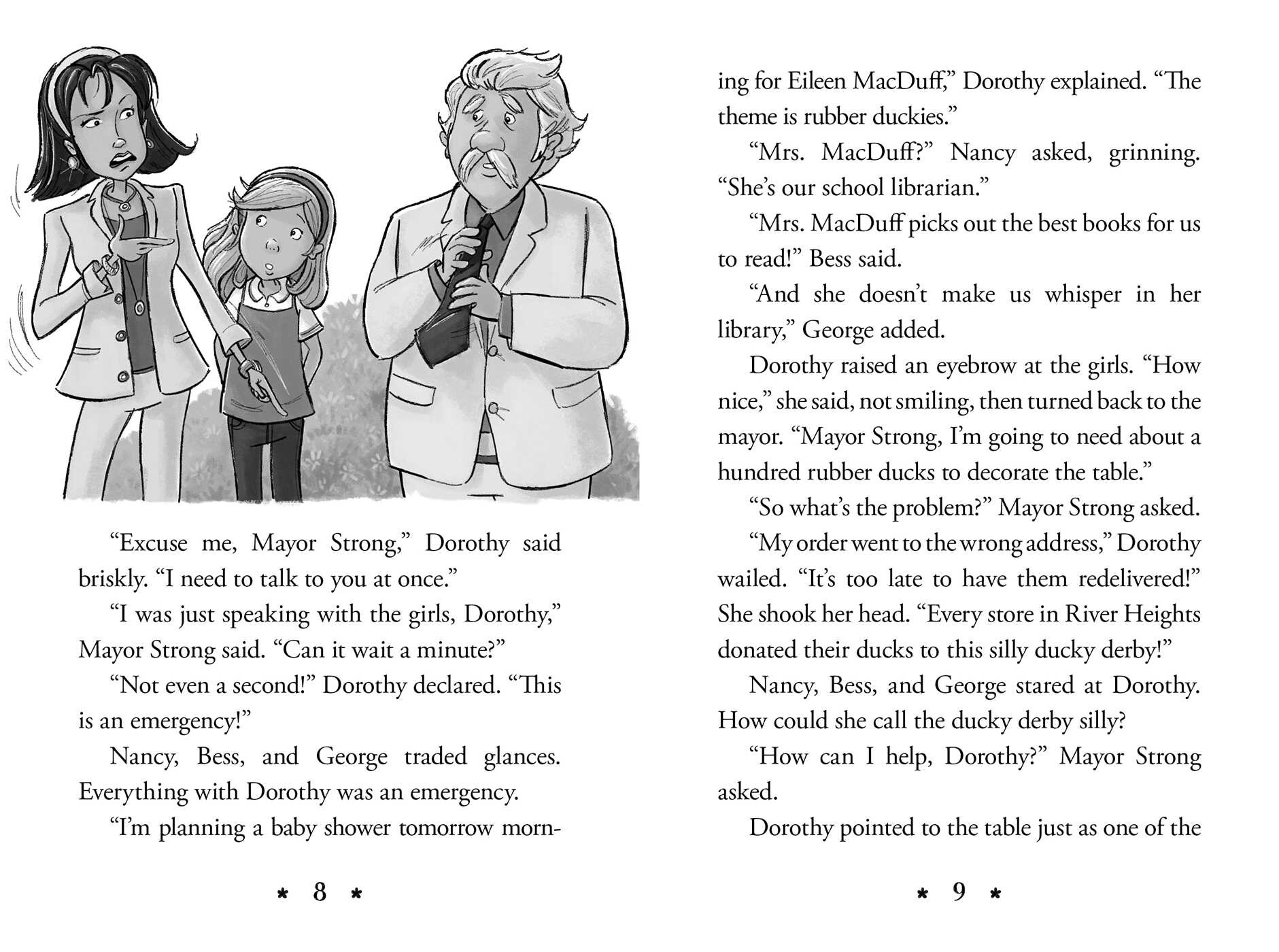 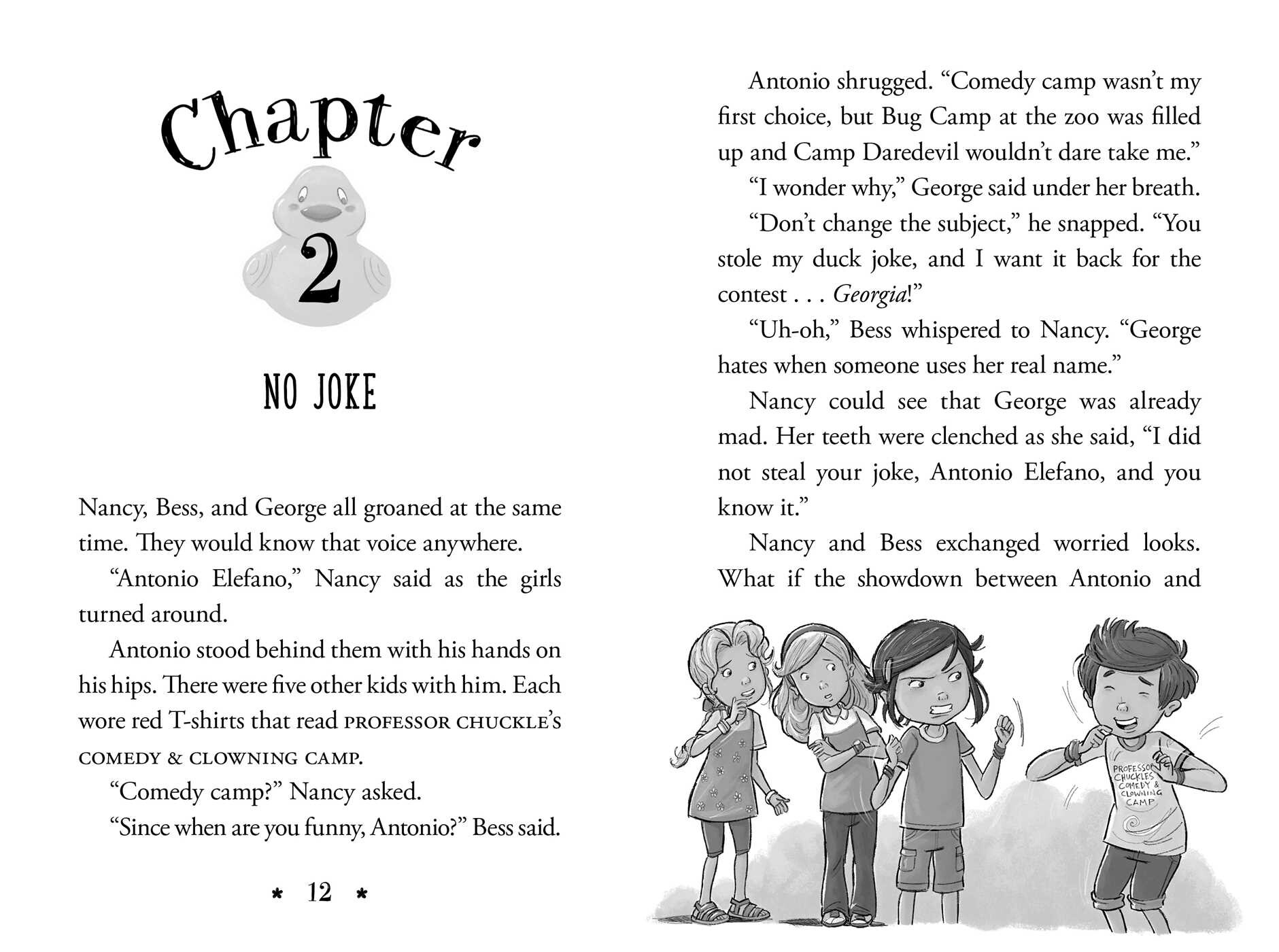 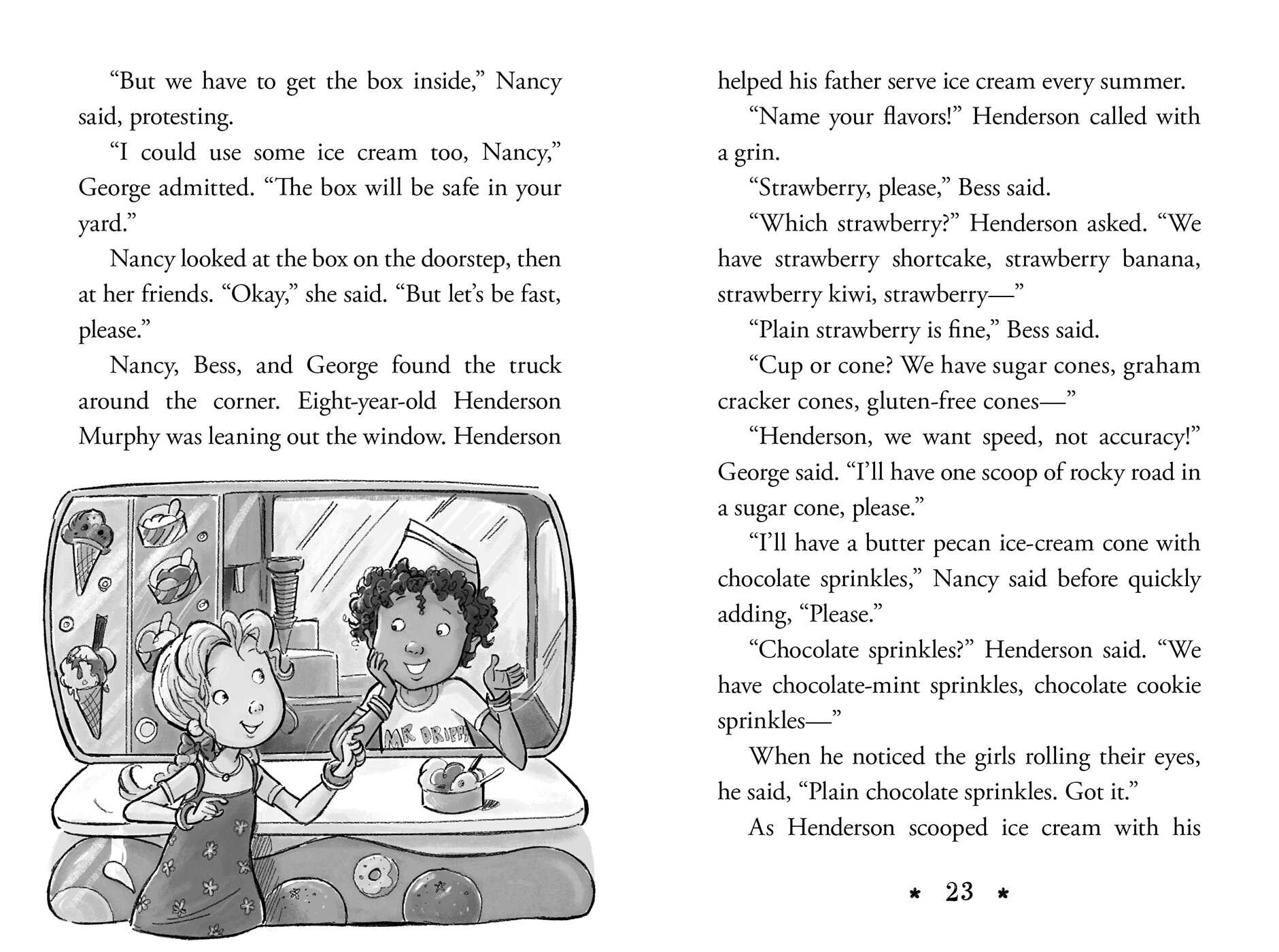 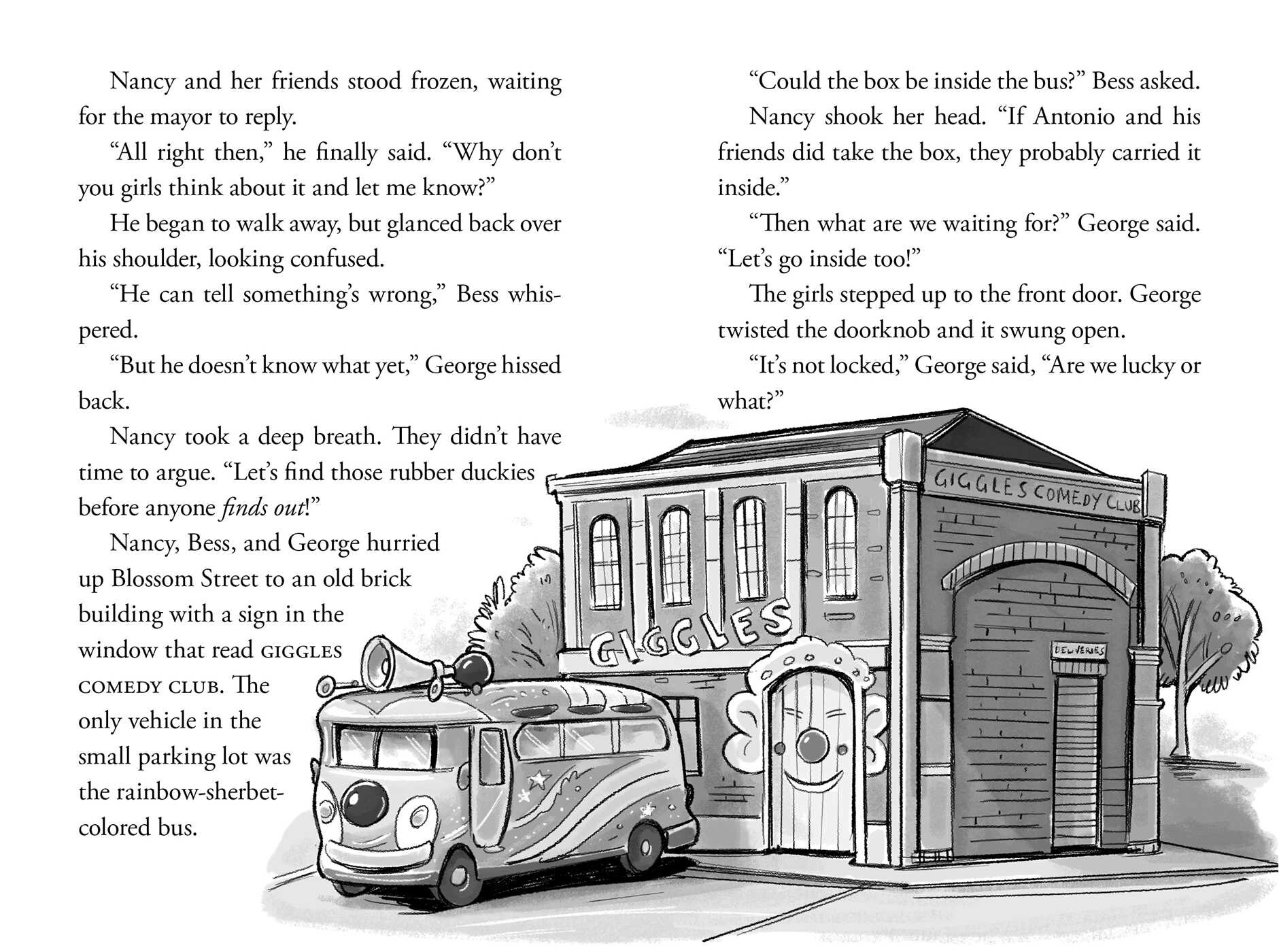 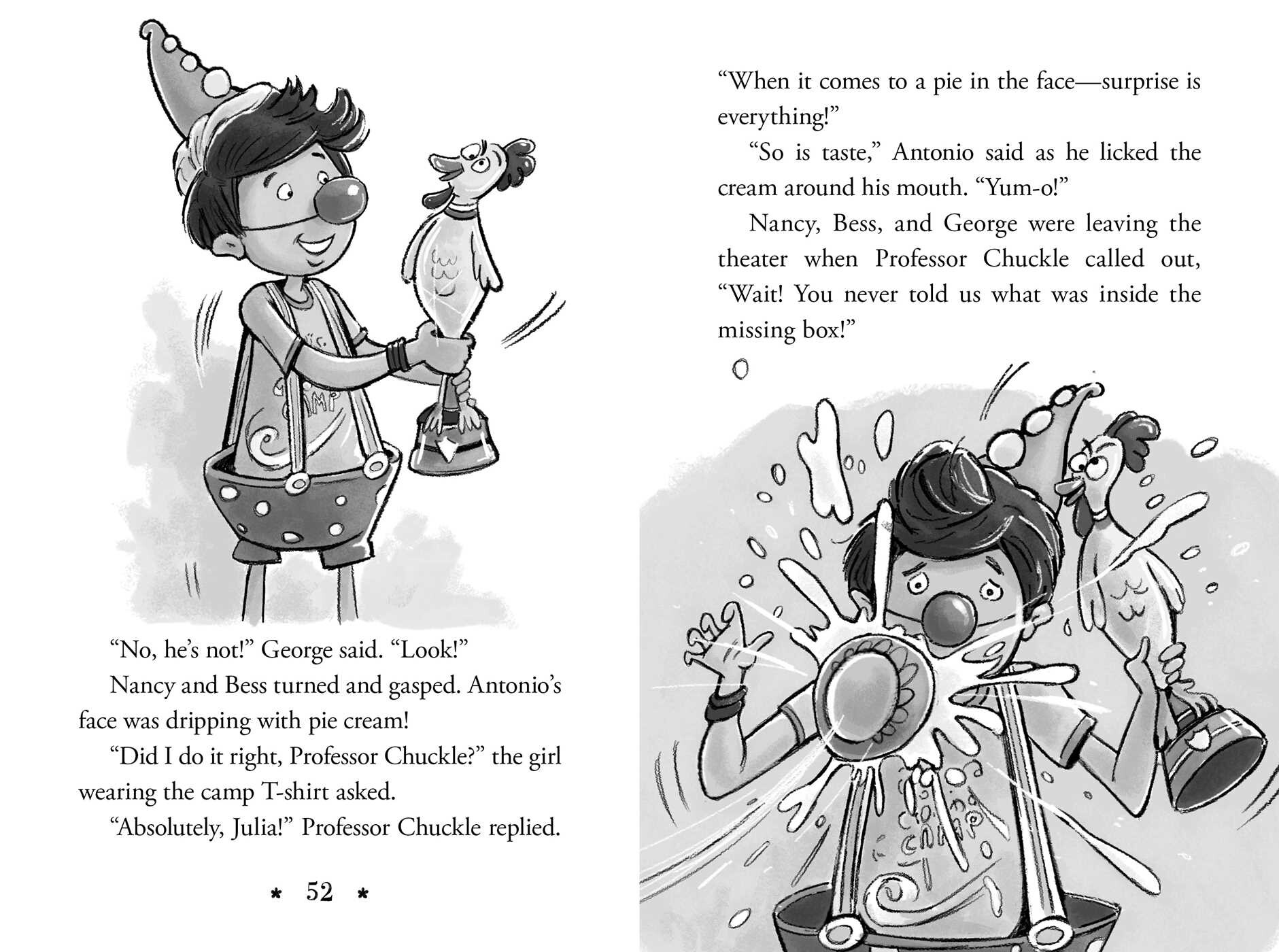 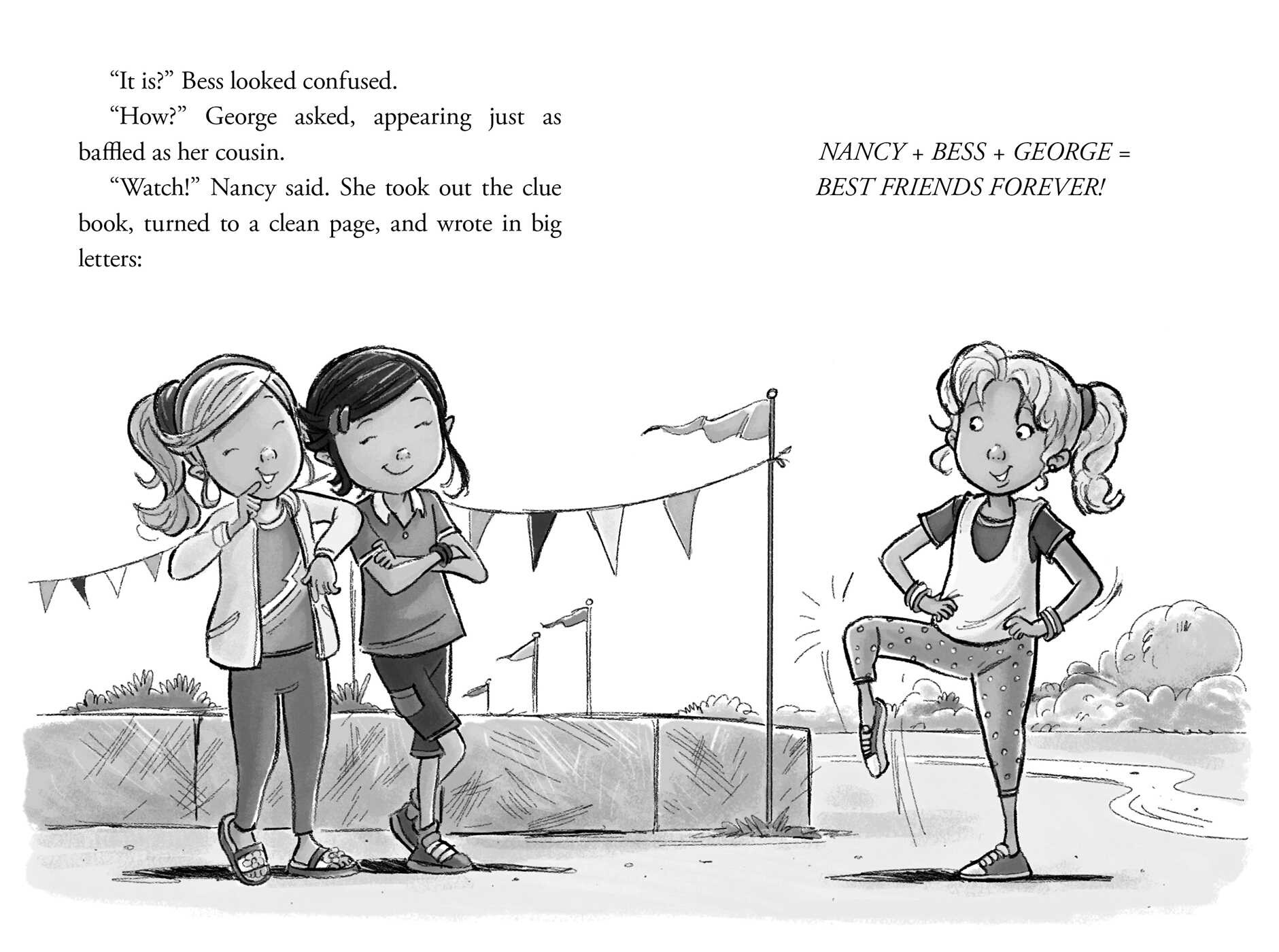 When the rubber duckies for River Heights’s duck derby go missing, Nancy and her friends are ready to quack the case in the sixteenth book in the interactive Nancy Drew Clue Book mystery series.

River Heights is hosting a duck derby to raise funds to install new benches by the pond in the park. Nancy, Bess, and George want to help, so they ask Mayor Strong if they can number the rubber duckies that will be used in the race. It’s a big responsibility, but they know they can do it.

Then the box holding the duckies goes missing from Nancy’s doorstep! The girls need to find the duck-napper fast, but there’s a flock of suspects. Where do they even start without even a squeak of a clue?

Will the Clue Crew figure out who flew off with their rubber duckies before the Mayor finds out they’re gone?

Chapter 1: Simply Ducky! Chapter 1 SIMPLY DUCKY!
“Hundreds of rubber duckies!” Bess Marvin exclaimed. “Can you imagine so many in one place?”

“Or in one bathtub?” George Fayne joked.

Nancy giggled as she and her two best friends walked together, enjoying the summer afternoon. That Friday, the air was as warm as cookies fresh from the oven. It was also full of excitement!

“There’ll be lots of room for all those rubber ducks when they race down the river on Sunday,” Nancy said. “And we’ll be there to watch!”

The girls couldn’t wait until Sunday, but it was already fun-day. There was a pre-derby festival at Mayor Strong’s house that afternoon, and it was just for kids!

“How will anyone know whose rubber duck wins the race?” Bess asked. “Most rubber duckies look alike.”

“Each rubber duck will have a number, Bess,” Nancy explained. “The first to float past the finish line wins.”

George gave a thumbs-up as she said, “The owner of the winning duck wins a summer of free movies at the cineplex—popcorn included!”

“Then I’m glad our families have ducks in the race,” Bess said. “I just wish kids were allowed to enter too.”

“Me too,” George said. “Then we’d really be a part of the rubber ducky derby.”

Nancy wished they could be more involved as well. There had to be more for them to do than cheer for the racing ducks. Suddenly she had an idea.

“Maybe we can help out at the ducky derby!”

“Help out how?” Bess asked.

“Let’s ask Mayor Strong when we get to his house,” Nancy said with a smile. “There must be something we can do to be a big part of the event!”

The celebration had already begun when Nancy, Bess, and George arrived at the mayor’s mansion. There were tables filled with duck-yellow cupcakes and duck-shaped cookies. There were games, too, like a rubber duck toss. Most of the kids were standing in front of a stage, waiting to watch the River Heights Junior Dancers rock out a number called “Disco Duck.”

Nancy, Bess, and George were about to join the crowd when a voice shouted, “There’s still time to buy a rubber duck for the derby, plus a chance to win the big prize!”

The voice came from a table set up near the gate. Behind it, a man and two women were selling rubber ducks for five dollars apiece. When they made a sale, the volunteer would toss a duck into a cardboard box. Nancy giggled as each landed with a squeak. The ducks sounded like her puppy Chocolate Chip’s squeaky chew toys!

“Remember, everybody!” a woman selling ducks called out. “The money raised will be used to build benches around the River Heights Park duck pond!”

“How many ducks do you think they’ve sold so far?” Bess asked.

Nancy was about to guess when a voice behind them said, “As of five minutes ago—two hundred eighty ducks.”

The girls turned to see Kinsley Armbruster from one of the other third grade classes at school. She wore a bright yellow cap with an orange duck bill and dangly ducky earrings.

Nancy, Bess, and George did love solving mysteries—so much so that they called themselves the Clue Crew. They even had a clue book where they wrote down all their clues and suspects.

“Yes,” Kinsley said, gazing at the table. “But I only have a hundred rubber duckies. I wish I had more.”

“Not if I want to break the record,” Kinsley replied.

“The Kids’ World Book of Records,” Kinsley said. “I just need a couple hundred more ducks to break the rubber ducky collection record. Then they’d post my name on their website and I’d be famous!”

“Not really,” Kinsley sighed. “A judge from the Kids’ World Book of Records is coming to my house this afternoon to count my ducks.”

Bess glanced at her watch. “It’s already one thirty. Shouldn’t you be home getting ready for the judge’s visit?”

Kinsley’s duck earrings wiggled as she shook her head. “I want to stay here until three o’clock. They’re giving out free T-shirts at the end of the celebration!”

Kinsley gave the girls a little wave, then headed toward the stage to watch the dancers.

“You already have a huge collection, Bess,” George said.

George looked Bess up and down and said, “Clothes! The judge of the Kids’ World Book of Records should check out your closet!”

Bess rolled her eyes. She and George were cousins, but they were totally different. Bess had long blond hair and the latest fashion-forward clothes and accessories. Dark-haired George loved clothes too, as long as they were comfy enough to do cartwheels in. She was also an electronics geek—and proud of it!

“There’s Mayor Strong,” Nancy said with a smile. “Let’s ask him about helping out at the ducky derby!”

Mayor Strong turned when he heard Nancy, Bess, and George call his name, beaming as he recognized the city’s best young sleuths. “What can I do for you girls?” he asked.

Just as Nancy opened her mouth to reply, a woman stepped between her and the mayor. The girls recognized her at once. It was Dorothy Danner, River Heights’s busiest party planner. The Clue Crew knew Dorothy from a missing butterfly case they once worked on. They also knew she could be a drama queen!

“Excuse me, Mayor Strong,” Dorothy said briskly. “I need to talk to you at once.”

“I was just speaking with the girls, Dorothy,” Mayor Strong said. “Can it wait a minute?”

“Not even a second!” Dorothy declared. “This is an emergency!”

Nancy, Bess, and George traded glances. Everything with Dorothy was an emergency.

“Mrs. MacDuff picks out the best books for us to read!” Bess said.

“And she doesn’t make us whisper in her library,” George added.

Dorothy raised an eyebrow at the girls. “How nice,” she said, not smiling, then turned back to the mayor. “Mayor Strong, I’m going to need about a hundred rubber ducks to decorate the table.”

“My order went to the wrong address,” Dorothy wailed. “It’s too late to have them redelivered!” She shook her head. “Every store in River Heights donated their ducks to this silly ducky derby!”

Nancy, Bess, and George stared at Dorothy. How could she call the ducky derby silly?

“How can I help, Dorothy?” Mayor Strong asked.

Dorothy pointed to the table just as one of the volunteers dropped another duck into the box. “Let me buy those rubber duckies for the baby shower.”

Mayor Strong shook his head. “Sorry, Dorothy. Those ducks have already been sold. They’re racing in the derby on Sunday.”

“All of them?” Dorothy cried.

The mayor nodded and said, “I’m afraid you’ll have to cook up something else.”

Dorothy stared at the mayor for a moment, and then her expression shifted. “Cook up something, huh?” she murmured. “Now, there’s an idea.”

A suddenly excited Dorothy brushed past the girls. She didn’t notice that she bumped George’s shoulder as she rushed off.

George crossed her arms. “She is a party planner, just like my mom, remember?”

“How could we forget?” Bess asked, licking her lips. “Aunt Louise saves us the yummiest leftovers from her parties!”

Mayor Strong glanced toward the stage. “Can your question wait, girls? I have to start up the duck joke contest.”

George’s eyes flashed as the mayor walked away. “Duck joke contest? I know the most awesome duck joke!”

“Okay,” George said with a grin. “What do you get when you fill a box with ducks?”

Before Nancy and Bess could guess, George blurted out, “A box of quackers! Get it?”