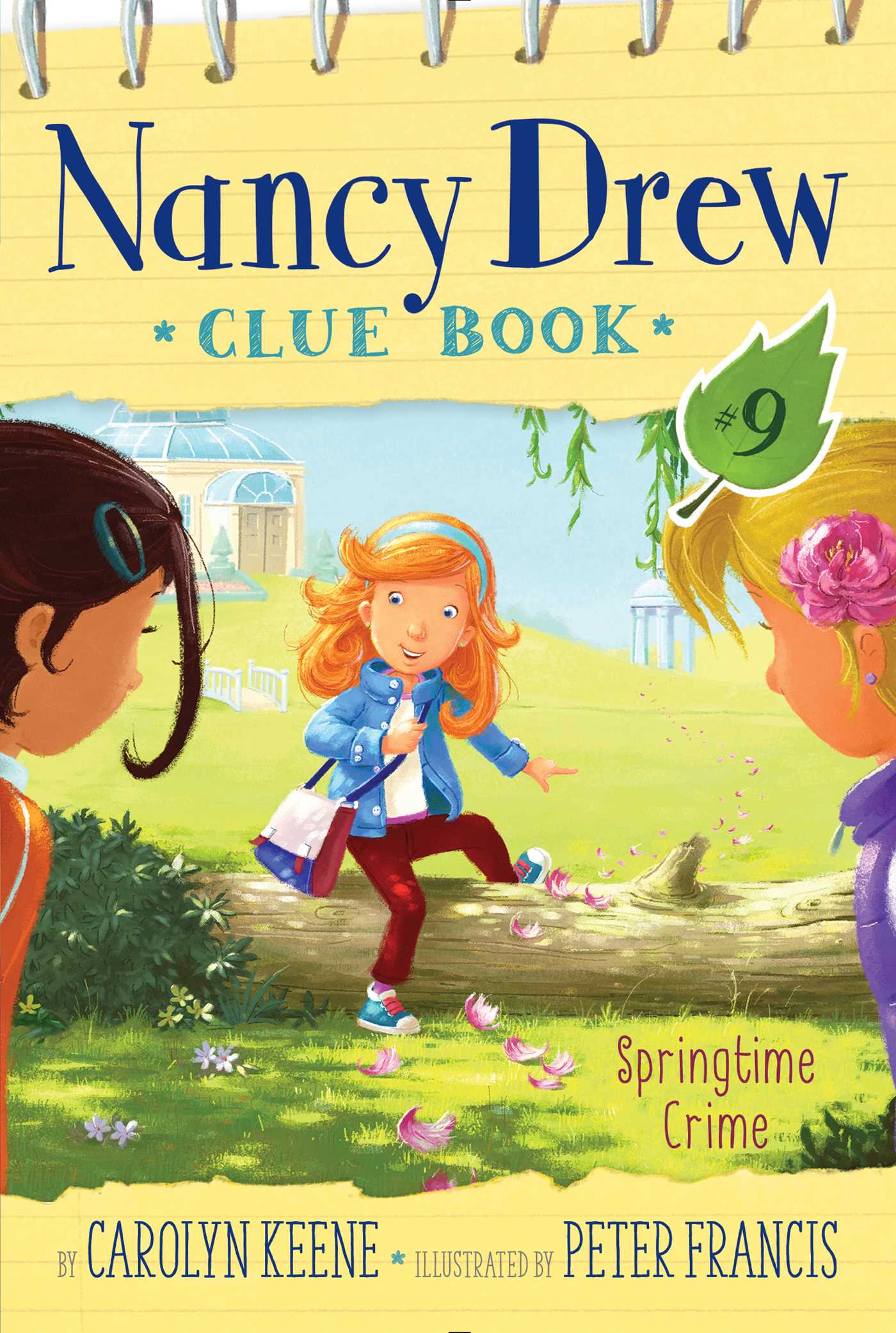 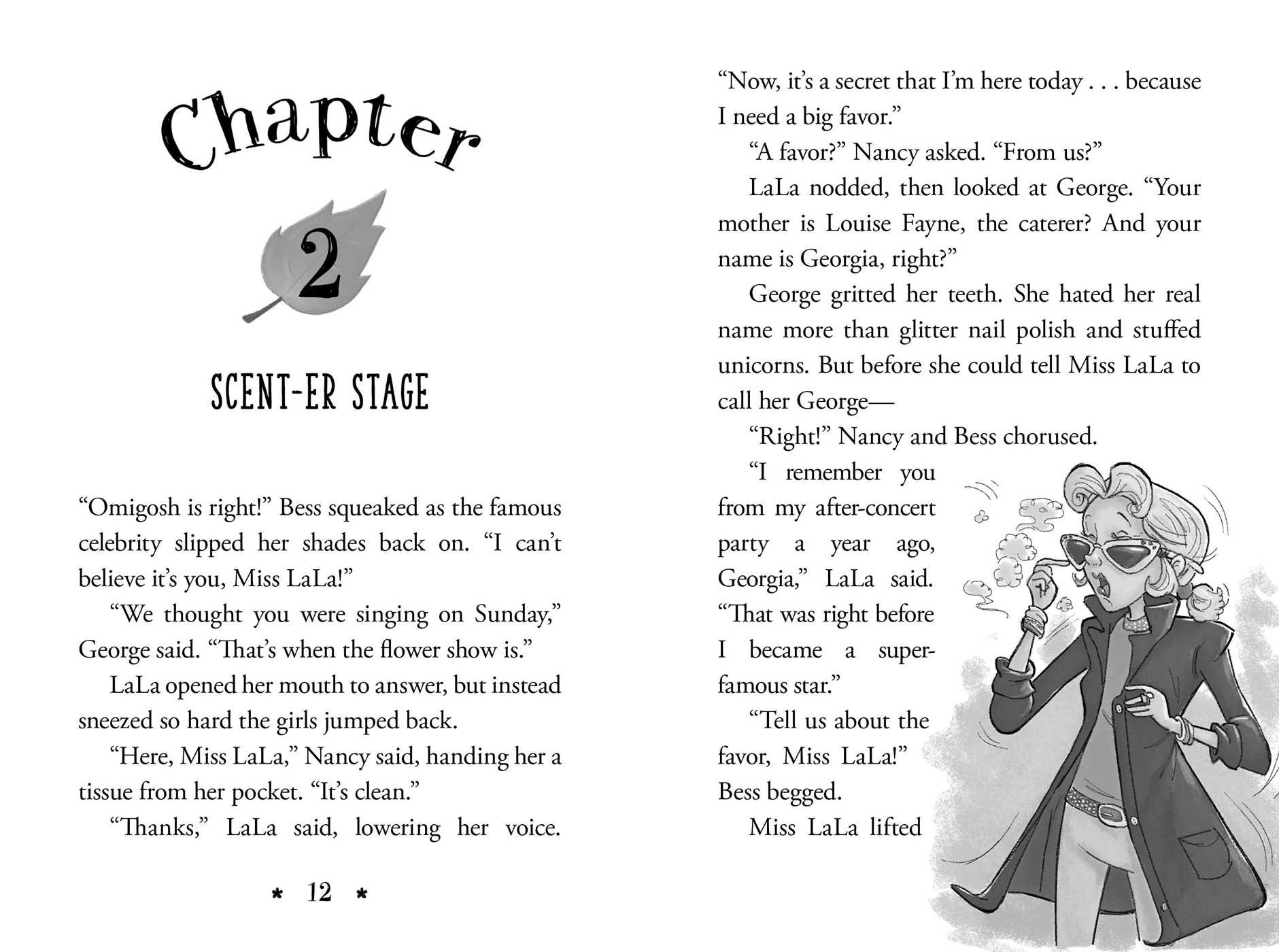 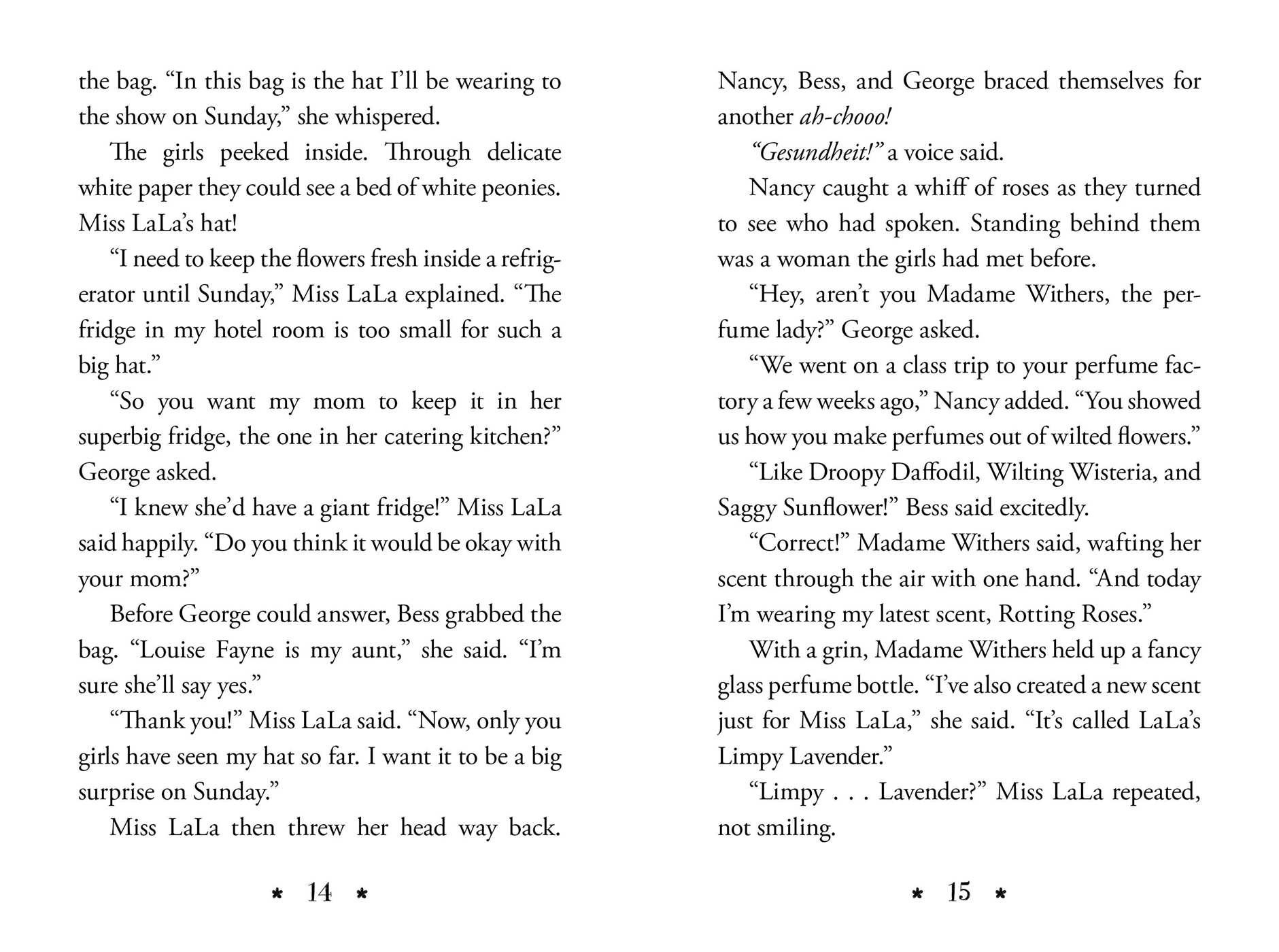 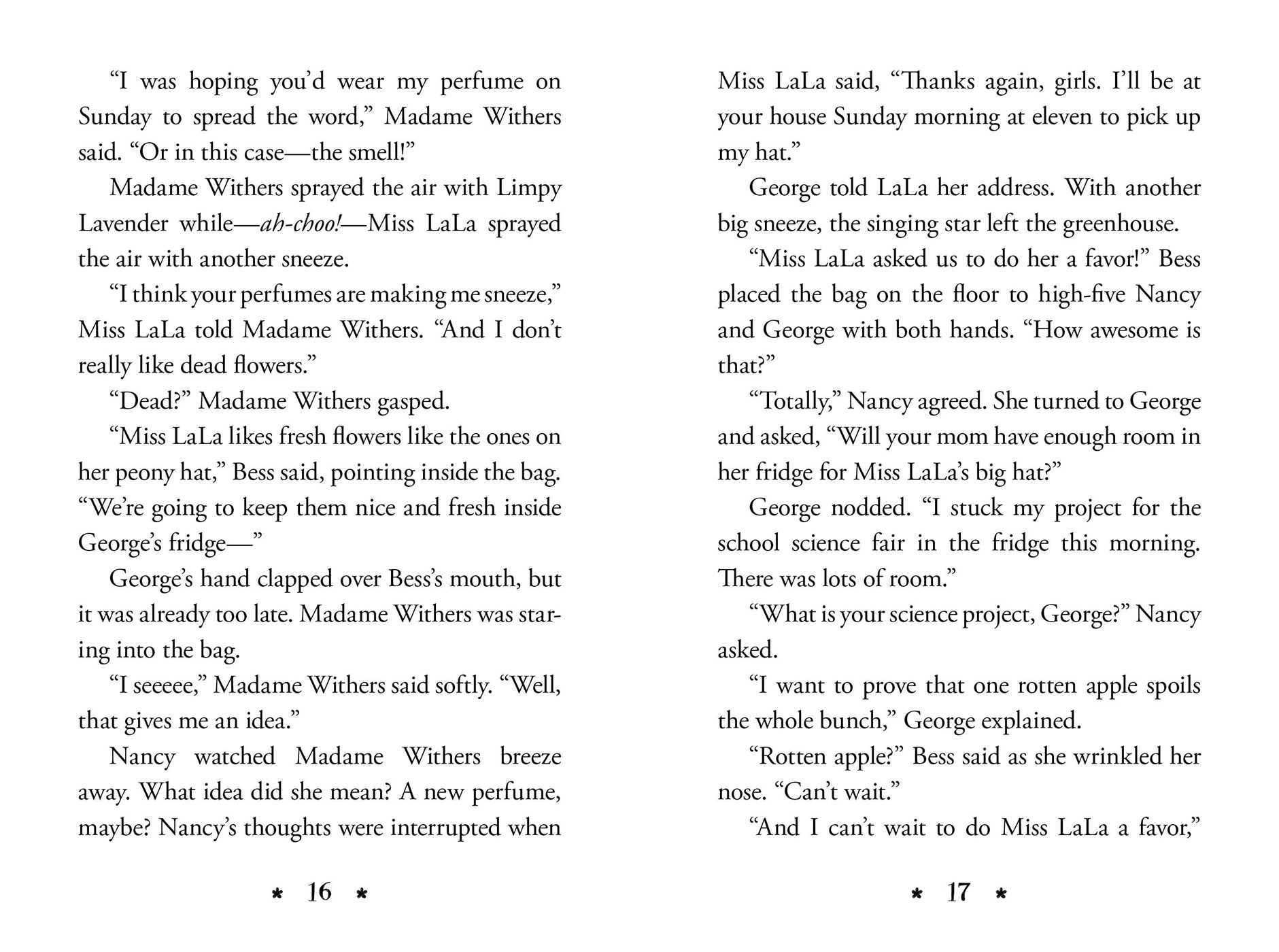 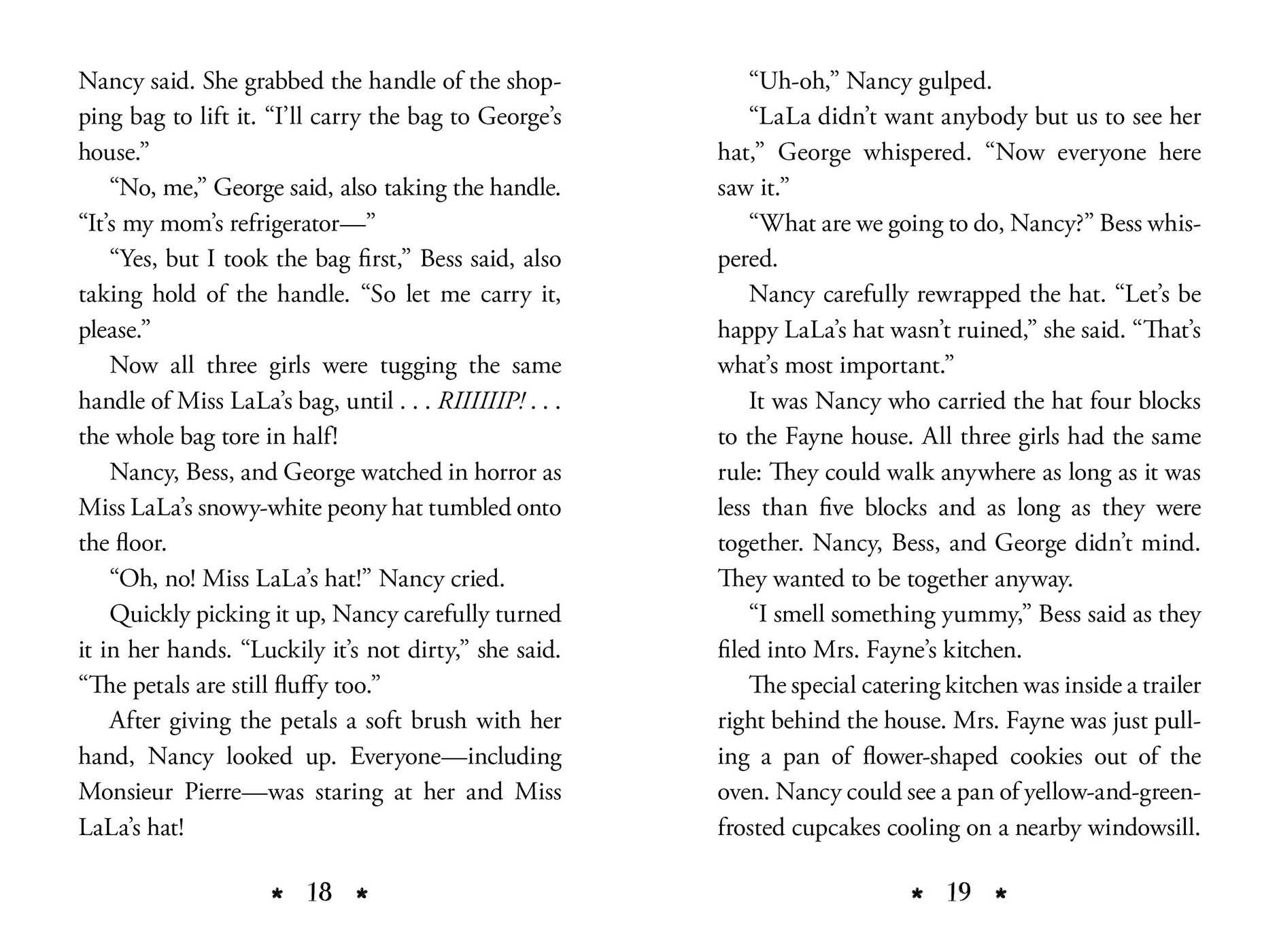 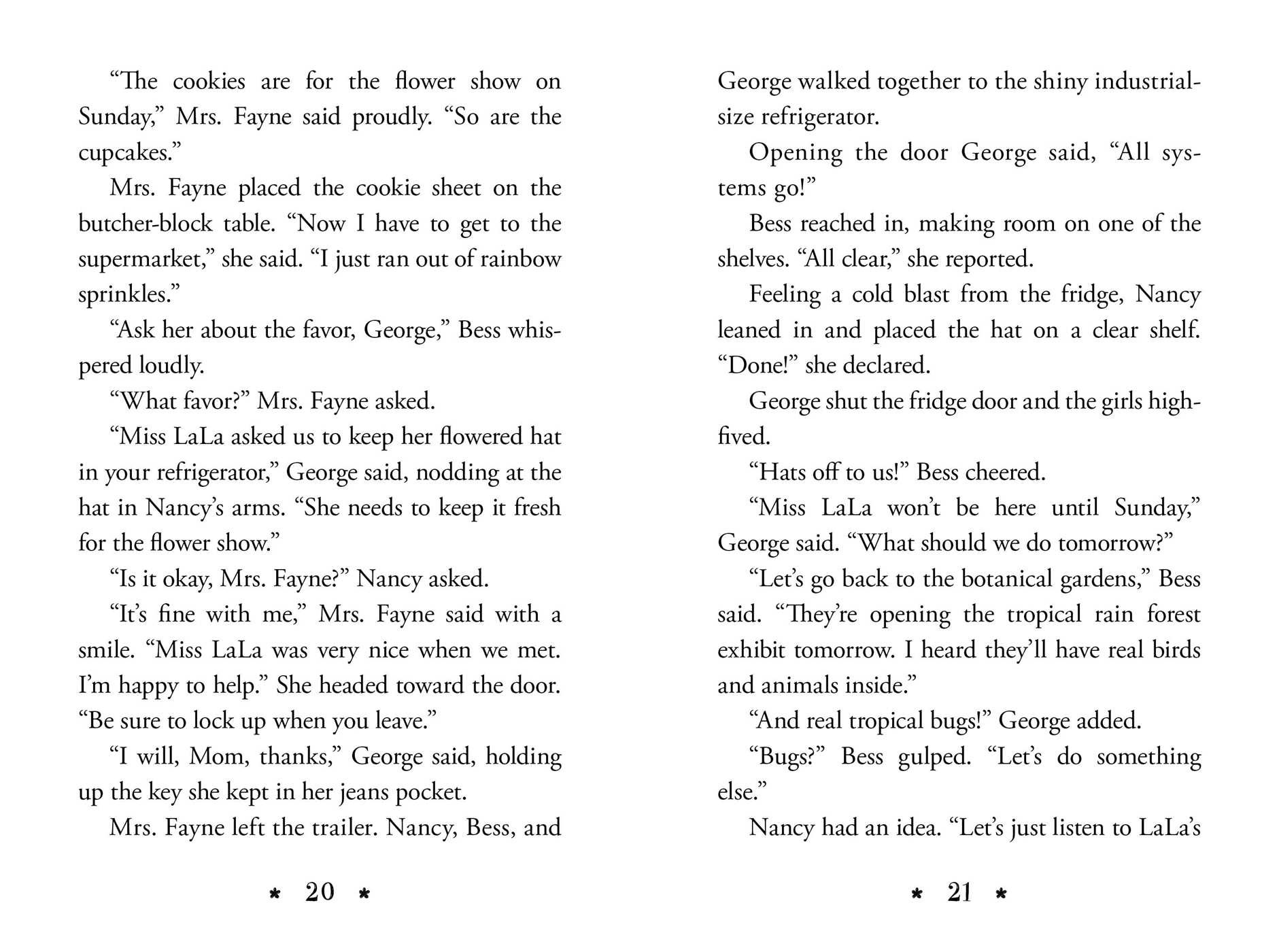 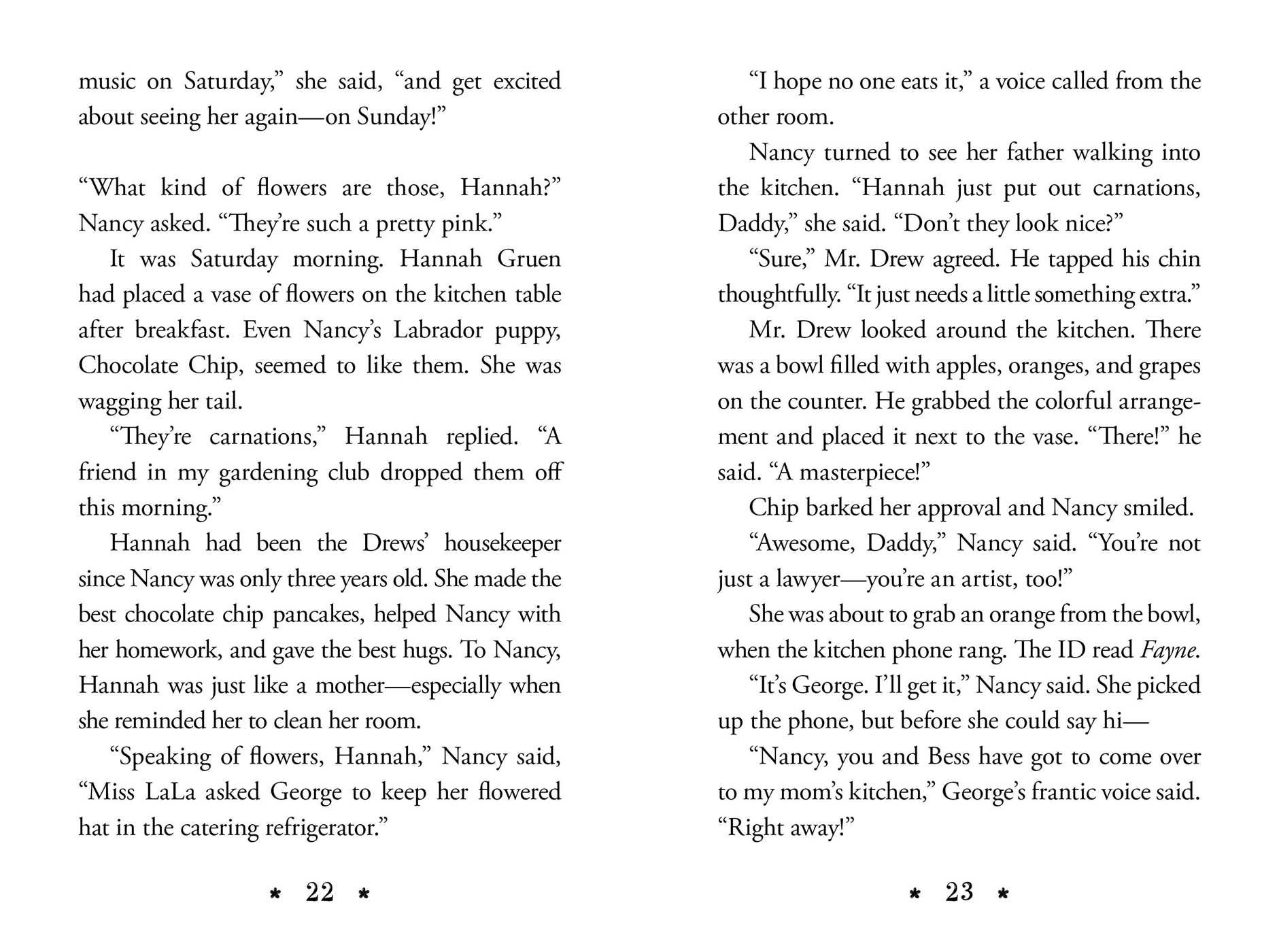 Help Nancy and her friends find out what happened to a superstar’s flower hat in the ninth book in the interactive Nancy Drew Clue Book mystery series.

Spring has sprung in River Heights! The annual Flower Sculpture contest is in a couple of days and everyone in town is working hard to finish their floral works of art. But Nancy, Bess, and George are most excited to see the world-famous pop singer, Miss LaLa, perform. The superstar grew up in River Heights and has agreed to kick off the contest with a song. And just when the girls thought life couldn’t get any better, they run into Miss LaLa herself! The singer is in a bit of a pickle though: She brought a giant hat made of white peonies for the show but she doesn’t have a refrigerator big enough to store it in. George thinks quickly and offers to put it in her mom’s catering refrigerator.

But when the girls check on the hat the next morning they see something has gone terribly wrong. Half of the snowy white blooms are wilted and brown! They use their detective skills to rule out a blackout. And George can’t remember if she locked the door last night. Could someone have snuck into the kitchen and switched the fresh flowers with droopy ones?

Nancy and her friends are determined to find out! Could it be Madame Withers, whose signature wilted rose perfume was rejected by Miss LaLa? Perhaps it was the famous flower artist Pierre, who was angry that Miss LaLa was the star of the show. Or it maybe it was Benjamin Bing, who ruined his flower sculpture with brown hair spray and had no more white peonies to replace them. It’s up to the Clue Crew—and you—to find out!

It was Friday afternoon and the first mild day of the year. After months of woolly hats, warm scarves, and puffy parkas, Nancy and her two best friends were wearing spring jackets in ice-cream colors.

“It’s starting to look like spring too!” Bess Marvin pointed out. “Look at all the pretty flowers.”

Nancy took a whiff of the awesome-smelling statues and sculptures made from fresh flowers. The temperature-controlled greenhouse they stood inside was the perfect place for the first annual River Heights Flower Sculpture Show.

“Why are all the flowers pink and white?” Bess wondered. “And round and puffy like ice-skate pom-poms?”

“They’re peonies,” Nancy replied. “That’s the official flower of the show. All the sculptors were told to work with them this year.”

“More like pee-yew-nees,” George said with a frown. “Our next-door neighbors, the Baxters, grow so many that they hang over the fence into our yard!”

“Peonies are so pretty, George,” Nancy said. “Why don’t you like them?”

Nancy, Bess, and George strolled through the greenhouse. The flower show was on Sunday but people were welcome to watch the sculptors put the finishing touches on their sculptures.

“I like that one best!” Bess said, pointing to a peony sculpture of a high-heeled shoe.

“No way.” George shook her head. “The peony robot is the best.”

“High-heeled shoe? Robot?” Nancy teased. “Are you sure you’re related?”

Bess and George traded smiles. Not only did the two cousins look different—Bess had blond hair and blue eyes, while George had dark hair and dark eyes—they liked different things too. Bess loved girly-girl clothes and accessories. George loved accessories too—as long as they went with her computer and electronic gadgets.

“If you were making a flower sculpture, Nancy,” Bess asked, “what would it be of?”

Bess and George nodded their approval. The three friends were the Clue Crew, the best kid detectives in River Heights. To help solve their mysteries, Nancy used a clue book to write down their thoughts, clues, and suspects.

“These sculptures are totally neat,” George admitted, “but the best part of the show on Sunday will be seeing—”

“Miss LaLa!” Bess cut in. “I still can’t believe our favorite singer will be the star of the flower sculpture show on Sunday!”

“I already met Miss LaLa,” George said. “My mom catered her after-concert party here in River Heights a year ago. Did I ever tell you that?”

“About a hundred times, George,” Bess groaned. “You told us she dressed up like a caterpillar inside a cocoon.”

“I heard that Miss LaLa will wear a huge hat to the flower show,” Nancy said excitedly, “totally covered in peonies!”

“Peonies again?” George sighed. “I hope there are no bees in her bonnet.”

“Or in that flower cupcake,” Bess declared.

Nancy looked to see where Bess was pointing. She smiled when she saw a giant white cupcake made of peonies.

Standing on a ladder while sticking a pink peony onto the top was a kid the girls recognized at once.

“It’s him, all right,” George agreed. “Who else would sculpt a giant cupcake?”

“Is it true that no sweets are allowed in Ben’s house?” Bess whispered. “Only food from his parents’ healthy store?”

“Don’t forget doughnuts,” Ben said, climbing down from the ladder. “I sculpt those, too.”

Nancy was embarrassed that Ben had heard them talking about him. “We were also saying how awesome your flower cupcake is, Ben,” she said quickly.

“Yeah,” George agreed. “It looks like the cupcakes my mom just put on the windowsill to cool.”

“My mom’s a caterer,” George explained. “She has a special catering kitchen in a trailer behind our house.”

“Buttercream frosting? Marshmallow?” Ben demanded to know. “Do the cupcakes have sprinkles?”

Nancy tried to change the subject. “How will you keep your flowers fresh until Sunday, Ben?” she blurted.

“Watch and learn,” Ben said. He pulled out an aerosol can and held it a few inches from the fluffy white peonies. Then Ben turned to the girls, spraying as he explained. “Hair spray isn’t just for hairstyles anymore. One good spritz will keep your flowers from wilting and even keep the dust off!”

“Not only that,” Ben went on, “clear hair spray will keep flowers nice and firm—”

George formed a T with her hands. “Time out for a second.”

“Why?” Ben asked, still spraying away.

“Since when is clear hair spray brown?” Bess asked.

“Huh?” Ben said. He turned to look at his sculpture and gasped. A whole side of his snowy-white cupcake was now brown!

Ben stopped spraying at once. He looked at the can and began to wail. “Arrrgh! This isn’t hair spray. It’s brown hair dye!”

“It’s okay, Ben,” Nancy said gently. “Just pluck out the brown ones and replace them with white ones.”

“I can’t!” Ben cried, pointing to his sculpture. “These are the last peonies from my parents’ greenhouse!”

The girls left Ben pacing nervously by his sculpture. Nancy felt bad for him and wanted to help. But how?

“Maybe he could spray-paint them white,” George suggested.

“I don’t think that would look very good. What about . . .” Bess trailed off midthought.

“I may have an idea!” Nancy squeaked.

The three of them had stopped in front of a giant poodle sculpture made of snow-white peonies. In River Heights there was only one sculptor famous for his peony poodles. He was from France and his name was Monsieur Pierre.

“If Pierre uses peonies for his sculptures,” Nancy said hopefully, “maybe he has some extras for Ben.”

But where was Monsieur Pierre? Nancy was about to ask another sculptor, when they heard voices. Angry voices coming from behind the peony poodle.

The girls peeked around the sculpture to see Monsieur Pierre arguing with Mayor Strong.

“I was told I’d be the star of the flower show on Sunday,” Pierre said. “How dare you ask Miss LuLu instead?”

“It’s ‘LaLa,’ and we’re lucky she’ll be singing at the flower show,” Mayor Strong said. “Her white peony hat came all the way from Paris, you know.”

“Well, so did I!” Pierre scoffed. “And my two poodles, Céline and Celeste!”

Nancy had heard the names Céline and Celeste before. They were Pierre’s standard poodles and the models for his sculptures.

“This isn’t a good time, you guys,” Nancy whispered. “Let’s ask another sculptor for peonies.”

Nancy’s eyes widened at the sight of the woman standing behind them. She wore a black trench coat with huge padded shoulders, dark cat-eye sunglasses, and fire-engine-red lipstick. Her blond hair was tied in a low bun, and she was holding a large brown paper shopping bag.

“I think you do,” the woman said. She lowered her sunglasses to reveal the deepest violet-blue eyes.

Nancy, Bess, and George gasped. Only one person in the world had eyes like that. It was—